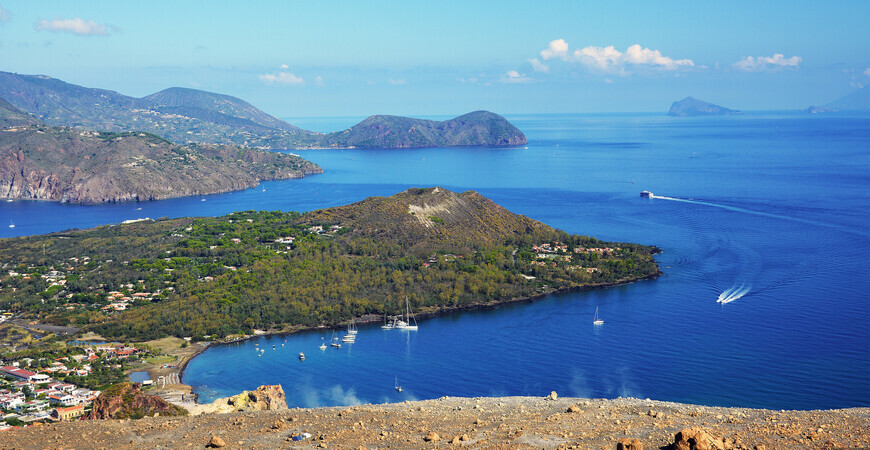 Vulcano is the southernmost of the group of the Liparian Islands. Located 25 km from Sicily. It has a small size: an area of 21 square km and a maximum height of 499 meters above sea level. It was formed after the eruption of a volcano in 183 BC.

The island is inhabited, there are about 500 people. Until the 19th century, the locals were engaged in the extraction of sulfur. The piece of land also served as a valuable source of building materials. After the sulfur and alum mines were shut down, the natives began to grow grapes. The main source of income remains to serve tourists. Travelers here, indeed, quite a few. The tourist flow occurs in the summer months, gradually begins to decline in the middle of the fall.

The popularity of the island of Vulcano in Italy caused by atypical relief in the form of cones of stratovolcanoes, hot and mud springs, beaches with mostly black sand.

Here you can feel like a hero of ancient legends. According to one of the myths of ancient Greece, Aeolus, the god of winds, once lived on this piece of land. The Romans also had their hypotheses, who considered the island as the forge of Vulcan, the god of destructive and purifying fire.

Volcanoes on the island of Vulcano in Sicily

Above the northeastern shores rises the main attraction of the area – the active volcano Fossa . Its last eruption occurred in the 1888s and 1890s. Despite the declining temperature of the fumarole fields, Fossa can wake up at any moment. Residents are reminded of this by the jets of steam and sulfur dioxide gas that periodically reach the surface of the caldera. The yellow fumaroles (so the phenomenon is called) with their foul-smelling sulfur smell make a strong impression on tourists.

The most important reason thousands of travelers flock to the crater of the volcano is the spectacular panorama. From a height of 400 meters you can clearly see the rest of the Liparian Islands and Sicily. However, in order to enjoy the natural beauty, you need to overcome the 800-meter hike.

The hiking route begins at the western slope. There you will find the first signpost with the inscription Al Gratere, 800 mt. Follow the winding dirt track. It is easy and even children can climb the path. However, you should wear comfortable shoes and clothes. You will reach the summit in 40-50 minutes at an average walking pace. Do not miss the opportunity and go around the vent, the diameter of which is 500 meters. On your way you will meet the fumaroles. Prepare in advance for the nauseating smell or better bring a protective mask.

At the southern end of the island is the highest point, Monte Aria. Monte Saracena is 18 meters behind it. Against this background, Monte Lucia with a height of 188 meters and looks unremarkable.

The northern part of the area is crowned by the 123-meter mountain Vulcanello. 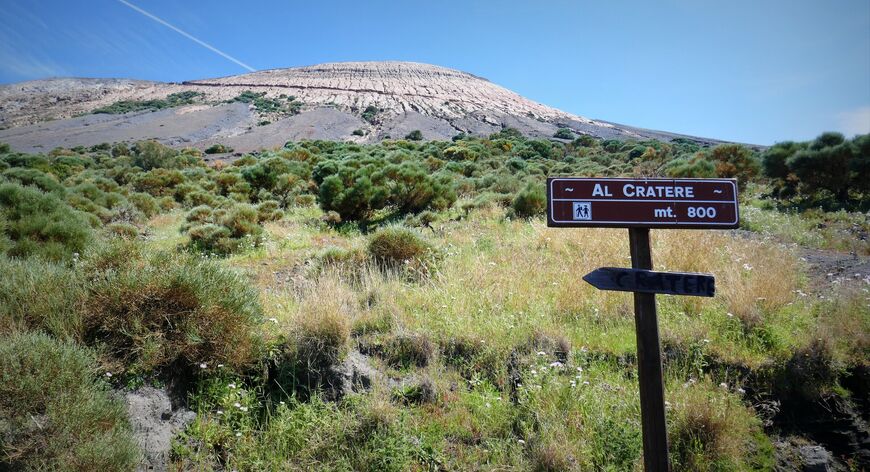 The beaches of the island of Vulcano in Italy

The southern part of the island is framed by Gelso, partly lined with coarse pebbles. Unlike the central beaches, it does not suffer from an overabundance of visitors. The highlight of the coast is the eighteenth-century church of Madonna delle Grazie and the abandoned lighthouse. Another secluded spot surrounded by lush, almost tropical greenery is Asino Beach. Both resorts have bars and umbrella and sun lounger rentals in the summer.

Baia Negra is much busier. It is located on the opposite side from the ferry pier. It has a smooth entrance to the sea, a sandy black surface, sometimes there are jellyfish. Infrastructure is represented by cafes, hotels, camping, cabins for changing and showers.

There is also a winner of the international “Blue Flag” award in 2017-2018 – Acque Calde beach . Tourists fell in love with this resort largely because of the warm water. It’s all about the hot springs, which resemble an open-air Jacuzzi. For entertainment you will find canoeing and kayaking, and boat and kayak rentals.

READ
Life in small states is a completely different world

What else to do in Vulcano

If you are not afraid of the smell of hydrogen sulfide and the consequences in terms of ruined clothes, take a mud bath. The procedure will be useful for people suffering from rheumatism, respiratory diseases. But do not overdo it – the duration of the session should not exceed 10-15 minutes. The spring is adjacent to the beach Acque Calde, bathing there is a fee.

The introduction to the sights of the area will continue in the Valley of Monsters. You will not meet terrible monsters there, but you will be able to look at specific volcanic formations. Their bizarre shape gave rise to the appropriate name. The valley is also home to many species of insects, grow rare plants.

For diving is excellent suited pool of Venus . But to get to the picturesque place can only be by boat – on land the area is surrounded by sharp rocks.

It’s time to enjoy Italian cuisine . Those with a sweet tooth will love granita, a Sicilian dessert consisting of crushed fruit ice with sugar. Try the cotognata, which is a quince marmalade. Don’t pass up a glass of Malvasia. The wine is made from local vineyards.

You can get to Vulcano only by water. The starting point is Milazzo, on the northeastern coast of Sicily. The port (Porto di Milazzo) is located at Via Ammiraglio Luigi Rizzo, 1. Tickets are sold there too.

By ferry: The ferry takes over an hour and goes from Milazzo to Lipari and stops at Vulcano. You can get there the same way back.

By boat: it will take you to your destination in about 40 minutes. Equipped with hydrofoils. The ships belong to the most high-speed passenger transport company Liberty Lines.

On the island: public transport is represented only by Scaffidi buses. Transport runs between the main settlements. From mid-June to mid-September, buses also go to Gelso. The schedule hangs on the main bus stop next to the pier.

By car: the rental car company is Sprint da Luigi. From the rental place you will reach the southern part of the island in half an hour. Take Strada Provinciale 179. The way to the foot of Fossa will take 5-10 minutes.

To the volcano of Fossa:

To the southern part of the island:

By cab : Taxi Santi, Taxi Vulcano Mr Carmelo are at your service.