The island of Dominica, which is located in the Caribbean Sea, is a true paradise with beautiful nature. There are a lot of interesting places, fascinating landscapes and ancient buildings. 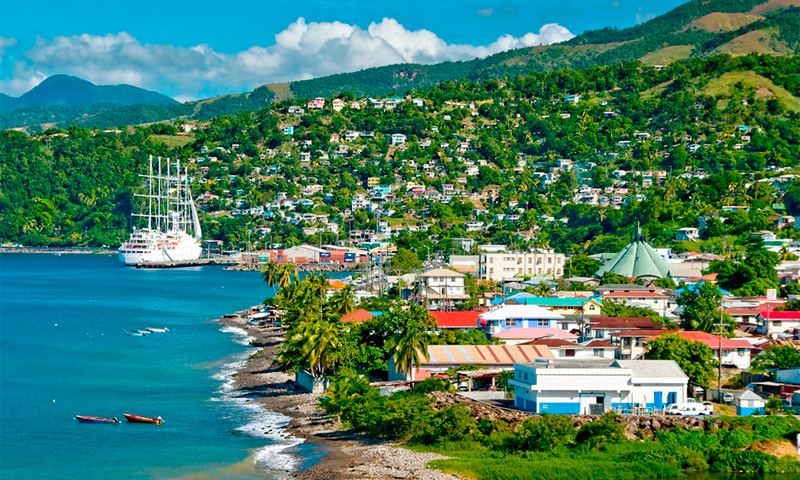 Who should go to Dominica and why?

First of all, the island is worth visiting for its natural beauty. Morne-Trois-Piton, Nozerne Forest, and Cabrits National Parks were created to protect this wonderful wildlife. The lakes, gorges and Trafalgar Falls, with their dense vegetation, different species of animals, birds and unusual sights, are memorable for a long time. And in the sulfur springs in Soufriya you can take a healing bath for beauty and rejuvenation of the skin.

But the sights of Dominica are not limited to this. In the capital of the state there are many architectural monuments and just interesting places. You can walk through the old square Old Market, where in the old days traded slaves, or go to the library Carnegie, which contains the works of scholars.

Also worth seeing are the remains of an ancient garrison and the Catholic Cathedral, built by the French more than three centuries ago. And in the Museum of Dominica you will learn a lot about the history and culture of this country. 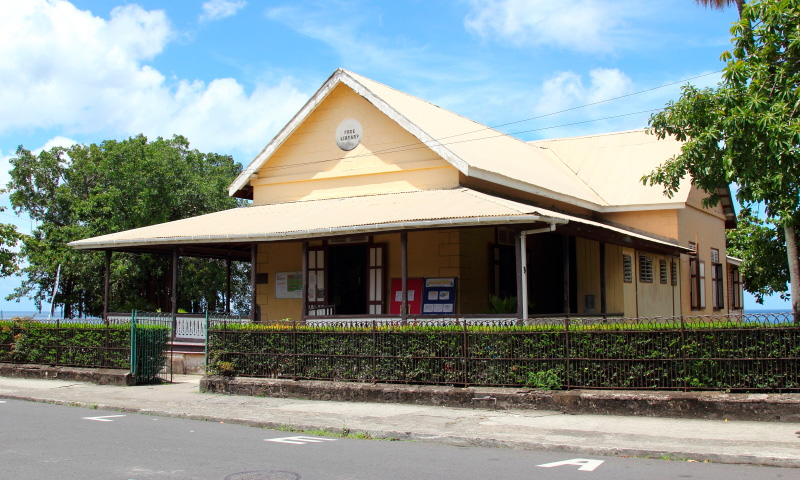 An important cultural attraction in Dominica is the Carnegie Science Library, which was founded in 1905. The building is shaped like a regular cube. Its collections contain works of famous scientists from all over the world.

Some of the books were donated to the United States, and others to various international organizations and foundations. The library is open to visitors, so any tourist can add their knowledge here. 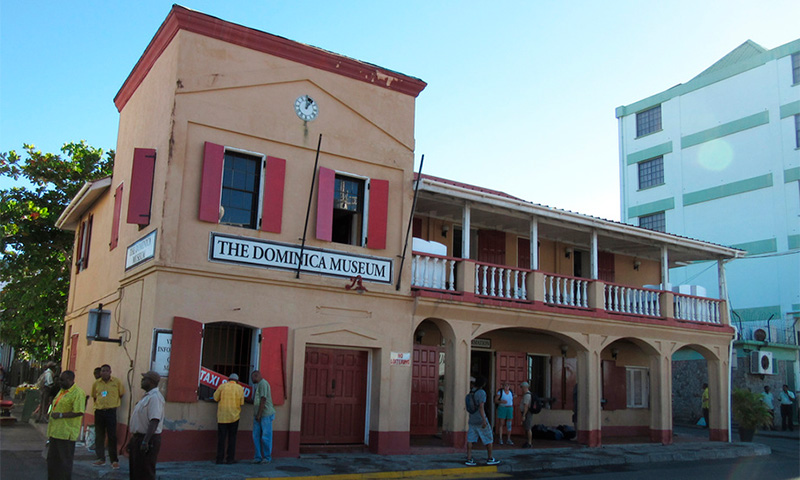 The Museum of Dominica is located in an 1810 colonial building on the waterfront in Roseau. On the first floor is the tourist office where you can get the information you need, and on the second floor is the museum, with a balcony overlooking the bay and the city.

The exhibition tells the social and cultural history of the country, archaeology and geology. You can see furniture, photographs and images of rulers, colonial agricultural objects, and more. 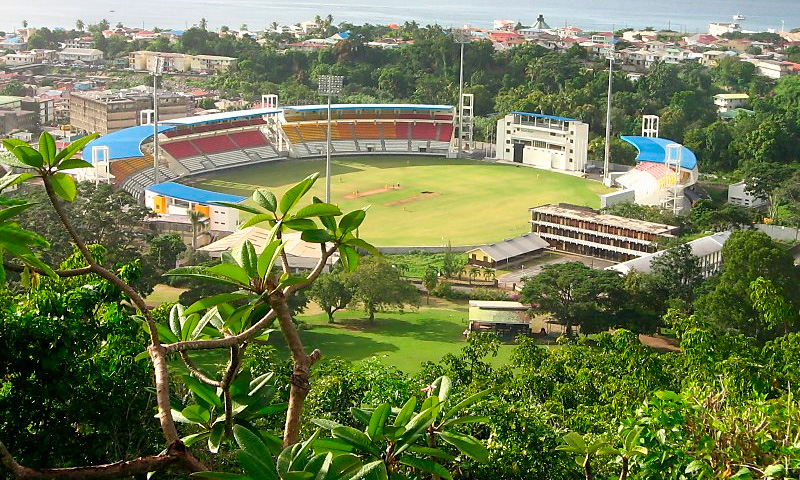 It’s not really a park at all, but a national stadium, which was named after the English town of Windsor. It is mainly used for cricket matches and other sporting events. It also hosts the World Creole Music Festival and the Miss Dominica pageant. Windsor Park has a capacity of 12,000 spectators. 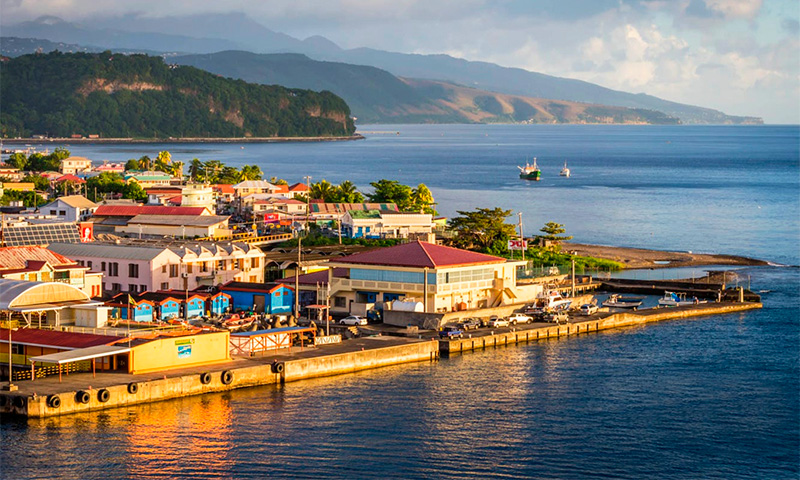 The old cobblestone square is located in Dominica’s capital, the bustling city of Roseau. Several hundred years ago, this was the site of a slave market where slaves were sold and bought.

The square is surrounded by colonial buildings and structures and is lined with picturesque streets and alleys that have kept their appearance for years. Not far from Old Market is the ancient Catholic Cathedral, built of stone. 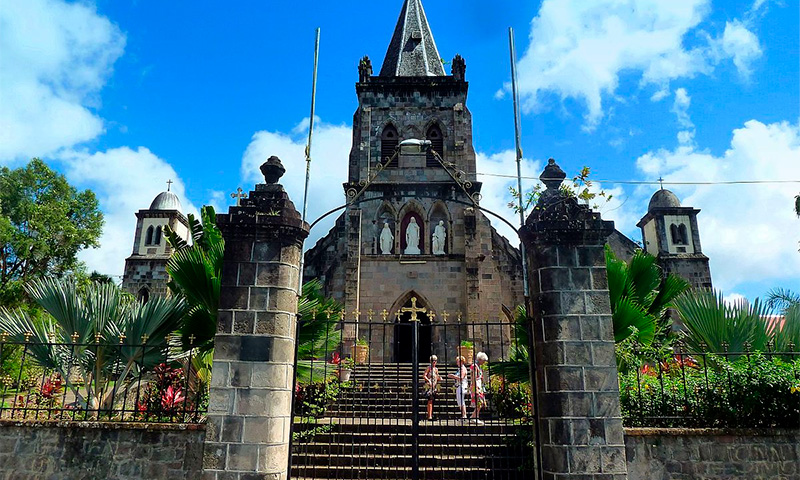 A Roman Catholic church in the Romanesque Gothic Revival style, it was built almost three centuries ago in the capital. The temple is considered an example of Creole influence. The building is striking in its majesty and elegance of form. It was built entirely of stone, which was brought from the neighboring islands. Inside, the cathedral is quite spacious and very bright. 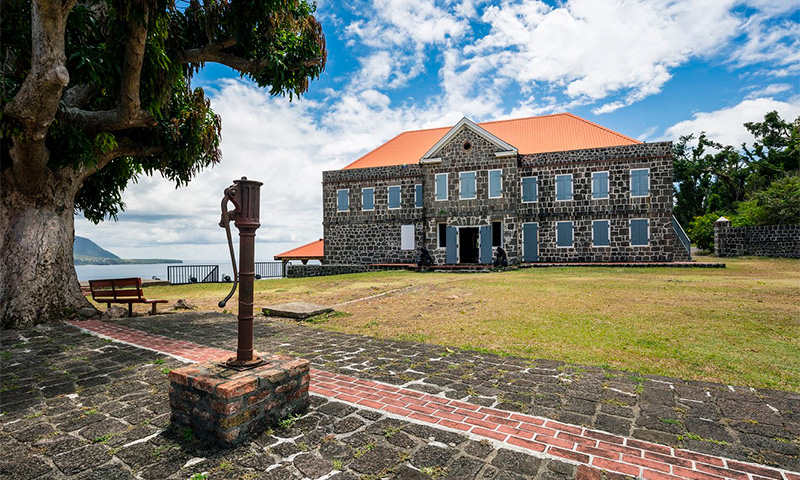 The fort is located in the Cabrits National Park. It is a British garrison, which was erected in the 18th century during the Anglo-French War and housed up to 600 soldiers. As a fort Shirley was last used in 1854.

The fort is now open to the public, with an ancient cannon lurking in the nearby brush and the ruins of the ammunition depots near it. The structure has a beautiful view of the nearby beaches. 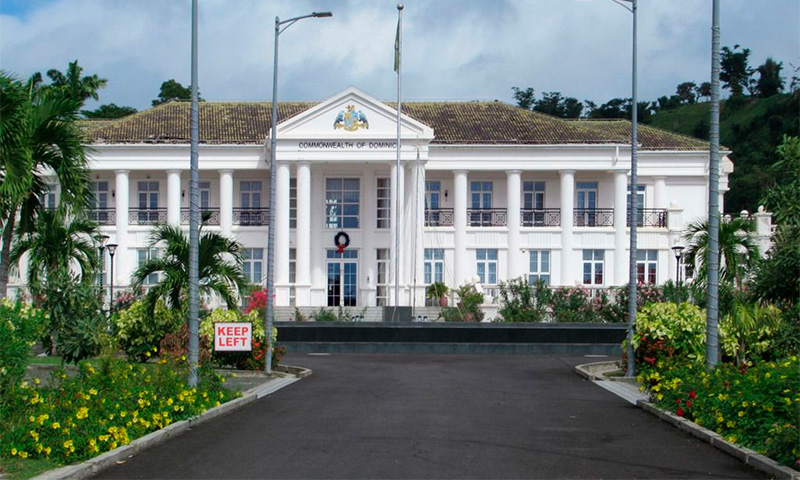 Government House is located in Roseau and is the official residence of the President of Dominica since 1978, when the state gained independence. Before that, it served as the governor’s residence. A beautiful snow-white building with a colonnade stands on a small hill. On the territory, fenced with a metal fence, there are alleys and grow a variety of trees and flowers. 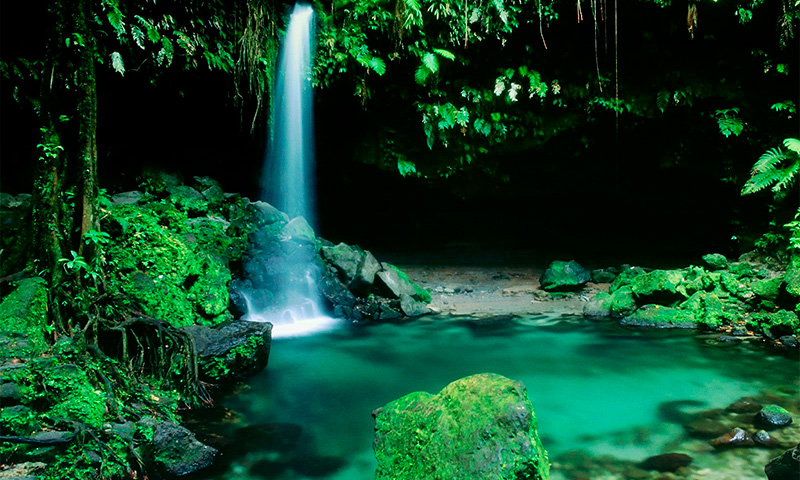 Lake Emerald, also called Emerald Lake, is located in St. David County. It is a very picturesque place with crystal clear water and a waterfall. Emerald is surrounded by volcanic cliffs and rainforest, making you feel like you are in a garden of paradise. The observation deck offers a spectacular view of both Emerald Lake itself and the surrounding area. 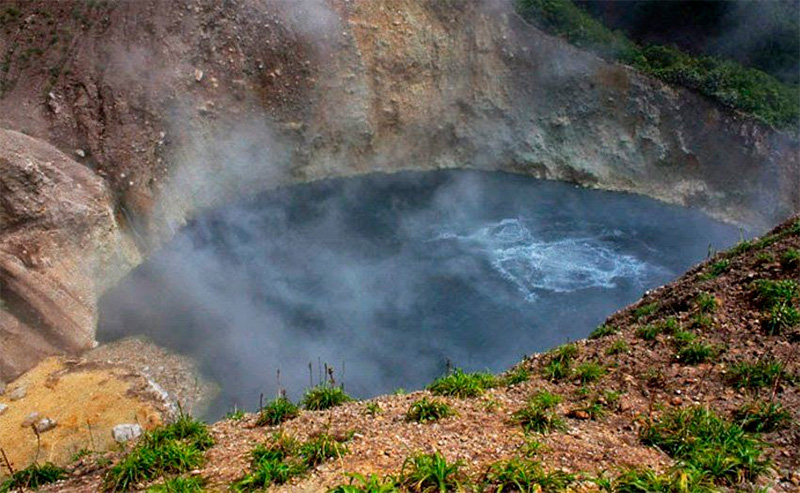 This is the second largest thermal lake in the world, which is considered a true wonder of nature. It is located in St. Patrick County, in the Morne-Trois-Piton Park. The temperature of water in it reaches 92 degrees, and boiling takes place constantly.

Around Boiling Lake are mountain ranges covered with mist, which is actually nothing more than the vapors of the reservoir itself.

A Field of Frozen Lava 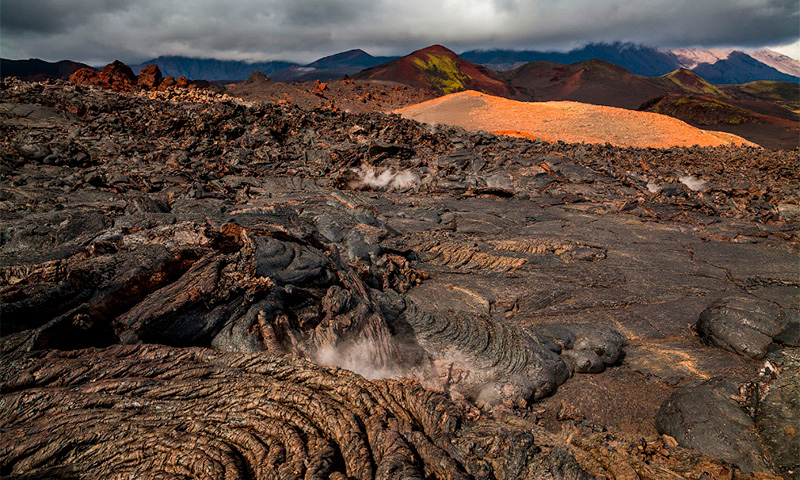 Another natural attraction in the Morne-Trois-Python National Park is a frozen lava field. Its surface is covered with bright red ridges resembling flames. The Indian tribes considered this place sacred, but the Europeans, when they arrived on the island, found the field dreary and nicknamed it the Valley of Desolation.

The Lake of Miracles 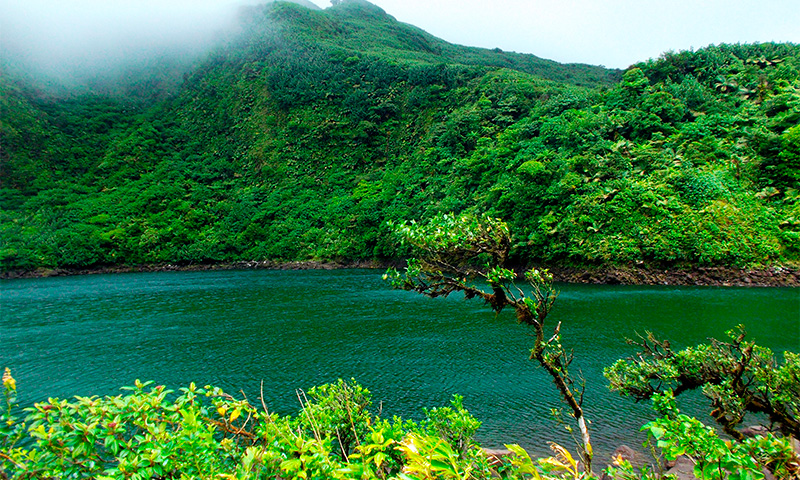 This unusual lake appeared quite recently – in 1997, and for its formation took exactly 7 days, so locals call it Holy. There used to be a plateau, but it collapsed after heavy rains.

As a result, three reservoirs appeared, blocking the flow of the Lajo. Two subsequently collapsed, and the upper basin became Miracle Pool. It is best viewed from the top of the mountain with a stunning view of the emerald water lake. 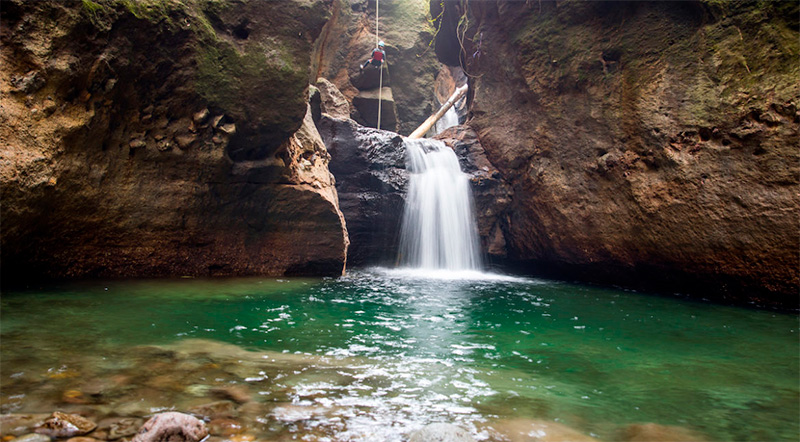 This is a picturesque and popular tourist destination. The long gorge is divided by giant cliffs that are surrounded by tropical thickets. Bubbling water splashes in it, flowing down from 5-meter-high stone walls to form a deep lake with cold but clear fresh water.

One of the episodes of the famous movie “Pirates of the Caribbean” was filmed in this gorge. There are always many visitors near it, who come here with their guides. But if you try hard, you can squeeze out the time when the gorge is empty and fully enjoy its beauty. 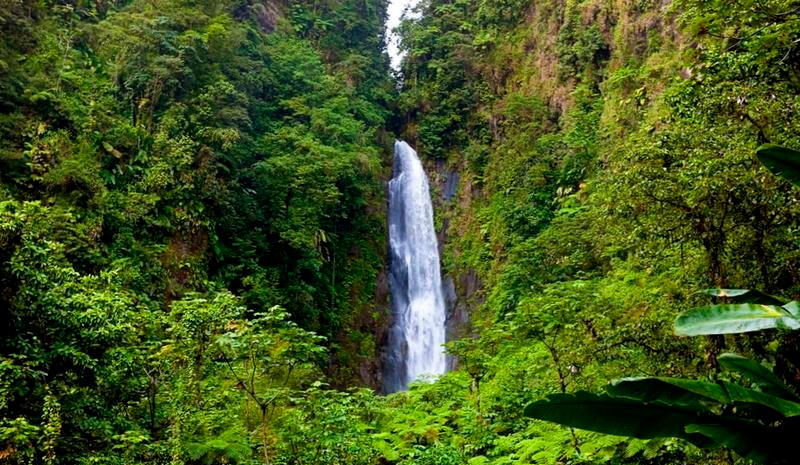 The Trafalgar Falls are not far from the capital city. It is an amazing sight and one of the most popular places in Dominica. The streams that form the twin waterfalls originate from tributaries of the Roseau River. One of the waterfalls is called “Mother” and the other is called “Father”.

You can admire them from a scenic observation deck surrounded by orchids. You can even go swimming in the basin of the smaller waterfall – its waters are saturated with sulfur, which has a healing effect on the skin. 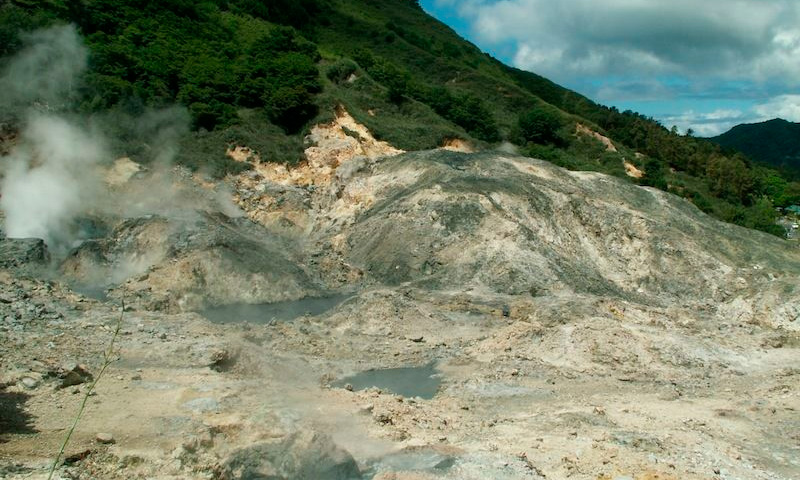 In the south of the island, near the village of Soufrie, there are sulfur springs. On the way to the springs you will find windowless wooden houses, in which you can sit in a sulfur bath and relax completely. You can warm yourself in natural sulfur springs, in addition, they have a beneficial effect on the skin – after such a bath it becomes soft and velvety.

The springs are surrounded by dense forests with lush vegetation, home to a variety of animals. There are also fanciful rivers and streams, colorful lollypop rocks, and much more. 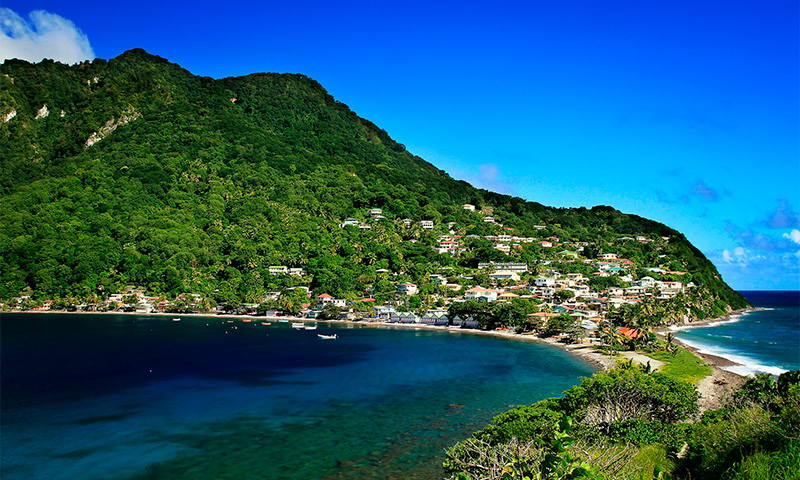 The park, which features terrestrial and marine flora and fauna, was established in 1986 on Fort Shirley and has an area of 531 hectares. The reserve’s conservation activities extend to the wetlands, which are home to flamingos and crows, as well as crocodiles. Vegetation is dominated by cacti, which serve as a refuge for iguanas and scorpions. 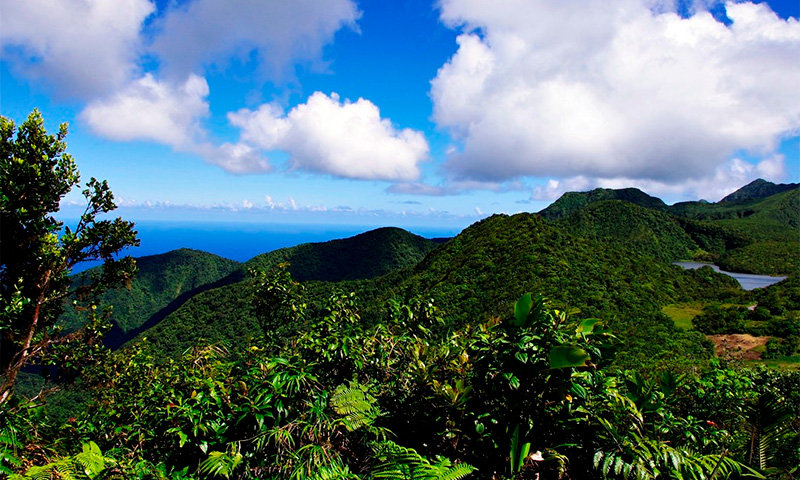 The national park is located 15 km from the capital of Dominica, near the extinct volcano Diabloten, which last erupted more than 30,000 years ago. The park is home to various bird species like petrels and rare parrots. Tree frogs, snakes, lizards and bats can also be found here. The Northern Forest is home to ferns and trees typical of the tropics.

READ
Cambodia: the most exotic temples in the world 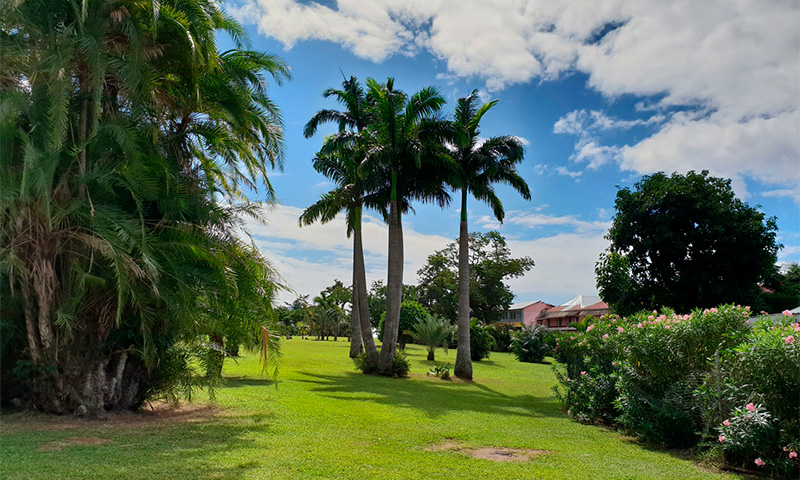 In 1891, the Roseau Botanical Gardens were established, collecting more than 50 varieties of trees, flowers and shrubs. It is also home to reptiles, birds and butterflies. The gardens can be divided into two parts: one part contains exotic and ornamental plants, and the other part contains trees used for economic purposes. The parrot reserve is housed here, which is home to two rare species of these birds – Sisseru and Jacquot. 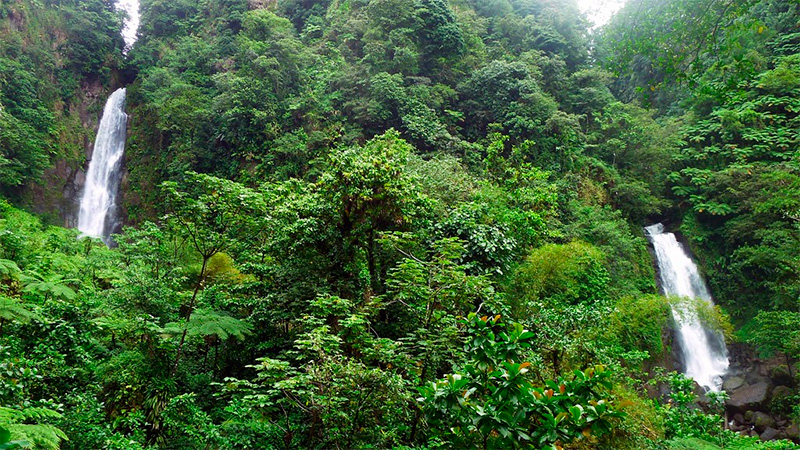 This 7000 hectare reserve is located in the southern part of the island in the territory of the mountain of the same name. It was formed in 1975 to preserve the natural rain forests where rare species of birds and animals live, and in 1997 it was included in the list of UNESCO World Heritage Sites.

The park is home to orchids, ferns and vines, as well as many unique natural lakes and waterfalls. The dense rainforest is home to a variety of fauna: non-poisonous snakes, feral pigs, iguanas, tree frogs, opossums, wild boars, and more.