Liguria is a region of Italy in the northwest of the country, washed by the Ligurian Sea. The administrative center is the city of Genoa. The most popular resorts are San Remo, Portofino, Portovenere, Santa Margherita Ligure, among others.

The region is also famous also for its popular tourist spot – the National Park of Cinque Terre and the picturesque rocky coast. 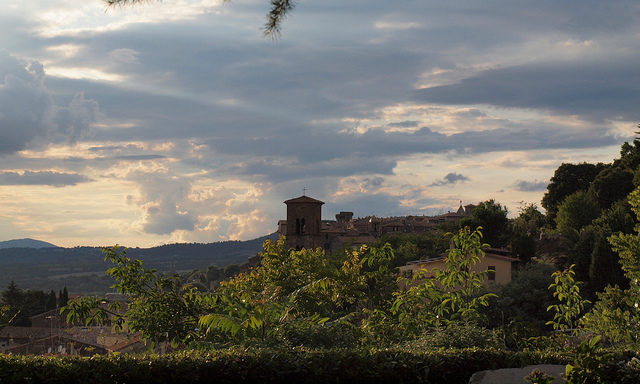 How to get to Viterbo

Viterbo is a charming historical town just north of Rome. If you are tired of the hustle and bustle of the Italian capital and want to escape for a day or two to a quiet, cozy and amazingly beautiful place, then you should definitely choose Viterbo. Framed by wonderful natural landscapes, Viterbo will captivate you with its architectural styles and landscaping. Viterbo is said to have a huge number of preserved landmarks, which have survived to this day in an almost untouched state. Viterbo is one of the best options for a sightseeing vacation of one or two days from Rome.

Public transport: Viterbo is about 80 km from Rome, and may be reached by train or by car. Trains to Viterbo run with enviable regularity – 2-3 times per hour during the day. The trains in Rome leave mostly from Roma Ostiense station, but may depart from Termini and Tiburtina, but pay attention to the point of departure. In Viterbo, however, trains arrive at Viterbo Porta Fiorentina station. Travel time will be about 1 hour and 45 minutes. Routes are direct and do not require transfers. The cost varies from 5 euros one way. You can check the schedule on the railway service Raileurope .

To rent a car in Rome, one must have a passport, an international driver’s license and a bank card to pay. You can find a rental shop in Rome as well as at the airport. 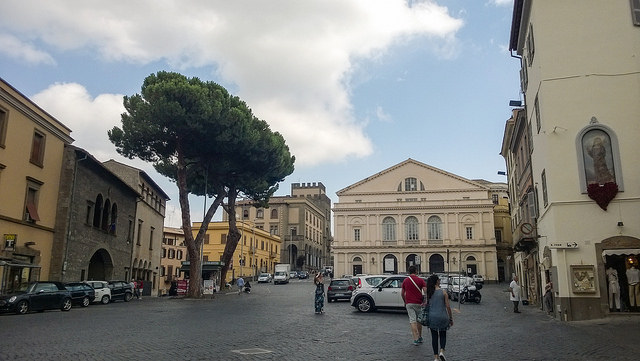 Marco Sbaffoni/In the streets of Viterbo

Most tourists often come to Viterbo for a day sightseeing tour, but there are also those who prefer to stay longer because of the thermal centers for which Viterbo is famous. The most popular types of accommodation in Viterbo are bed and breakfasts, apartments and vacation homes. Guest houses and standard hotels are a little less popular, but there are plenty of those too.

The local pricing policy for housing is quite democratic. When choosing where to stay it is advisable to pay attention to the location of a particular hotel / apartment, because the main attractions and thermae are in the historic center of the city. If you choose to stay in the countryside you can enjoy the view, but you will need to travel by car or public transport to get to the center.

Among the apartments, the following options are consistently popular with tourists: Antica Dimora San Pellegranz:

As for the hotels, there are also many options that have proved themselves in a positive way. Some of them are:

Viterbo is equally famous for its historical sites, thermal springs and beautiful natural scenery in the surrounding area. Viterbo is a little pearl of Lazio and one of the most interesting destinations from Rome. It is advisable to begin your tour of the city with its historical center.

In Viterbo it is the medieval quarter of San Pellegrino, where the architectural monuments are surprisingly preserved in a virtually untouched, unadorned state. A succession of wars and natural disasters has spared Viterbo, which has allowed the medieval quarter to remain in its authentic form. Arches, vaults, towers, stairs, fountains – all this just frames the main historic monuments of the city, such as Dei Papi Palace, the Cathedral of San Lorenzo, Dei Priori and Del Podesta palaces and many others. 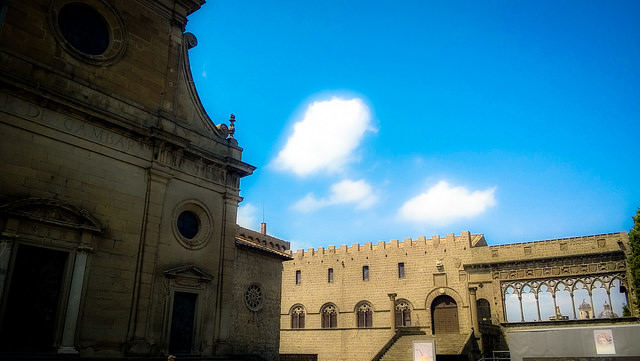 Once you have walked around the historic center, take a stroll at Villa Lante, which rivals the famous Villa D’Este in Tivoli. Here you can stroll through the wonderfully landscaped garden, see medieval fountains and sculptures, marvel at the engineering and architectural design, and be amazed at the countless bronze statues, balustrades and other objects of art that gracefully decorate the Renaissance gardens of Villa Lante. 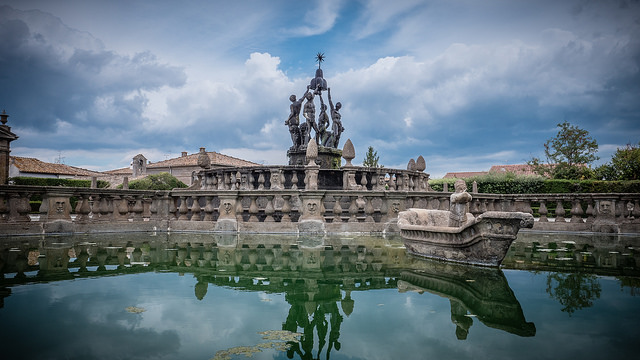 The thermal springs of Viterbo are not to be missed. You can find in particular the Therme dei Papi and the thermal park Bagnaccio. See below for more information about each. Therme dei Papi is open all year round in Viterbo and the entire area is divided into a thermal and a spa area. The thermal zone has a large thermal pool and a natural cave (grotto) with springs of 58 degrees; the spa zone offers a wide range of treatments including mud baths, massages, facials, etc. The thermal complex is open daily from 9 am till 7 pm (exit – Tuesday). The cost of a visit to the pool is 12 euros for an adult, a ticket to the grotto is 13,5 euros, treatment procedures are paid separately.

READ
7 things to do in Munich, Germany in fall

The Bagnaccio thermal park is located in the outskirts of Viterbo, a few kilometers north of the historic center. It is an open-air park with natural swimming pools, each with underground healing springs. The park is open in the summertime every day from 7 am, entrance is free. The park has 5 pools of various properties, changing rooms, a botanical garden, parking, food area, etc. 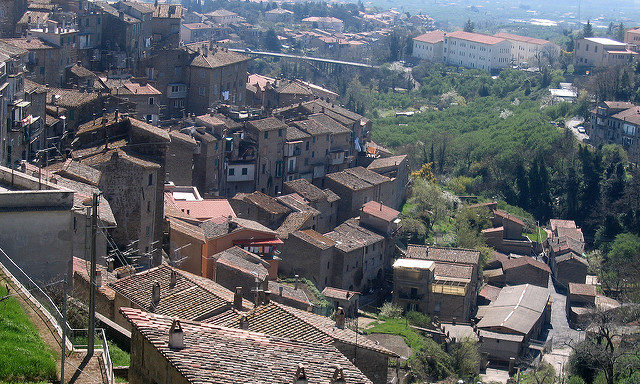 While in Viterbo, don’t leave out the beautiful and abundant nature of the region. Viterbo is surrounded by the picturesque Ciminas Mountains and just a few kilometers from Viterbo you can visit Lake Bolsena. Both natural attractions are worthy of attention of travelers and all nature lovers. Thus, the peculiarity of the Chimino Mountains are unique beech forests and groves, and the Bolsena Lake is of volcanic origin and is formed in the crater of an ancient volcano.

In general, we can say that Viterbo, despite its tiny size, can satisfy the curiosity of almost any tourist, because there is a large accumulation of historical monuments, amazing natural scenery and even healing thermal springs, which will help you to relax and feel better. 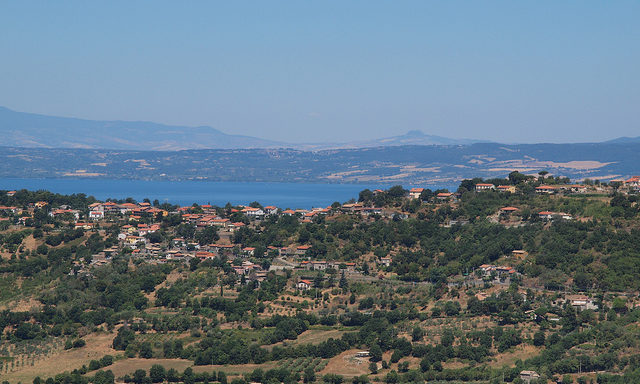 We’ll be happy to answer your questions in the comments!

Going on a trip to Italy, do not forget to take out a travel insurance policy, which is compulsory at the stage of obtaining a tourist visa. The insurance policy can be taken out yourself, without leaving home. There are special services for this purpose, such as Tripinsurance, Cherehapa, and others. You can purchase the policy online and then print it out on an ordinary printer.

The exact date of the founding of Viterbo is unknown, but already in Etruscan times there was a small settlement here. After the Roman conquest, a military camp was founded on the site of the town: Castrum Herculis, named after the legendary temple of Hercules; since then, a lion occupied the town’s coat of arms. In the VIII century the city was already mentioned as Castrum Viterbii, a fortress built in 773 by the Lombard king in his futile attempt to conquer Rome. Later Viterbo became part of the Papal Region, but this status was contested by the emperors until in 1095 the city became a free commune owning numerous castles in the area. When the popes lost power over Rome, Viterbo became the seat of the papal residence.

READ
Getting around Tallinn, Estonia: information, costs and tips

The first pope to settle in Viterbo was Pope Eugene III (1145-1146). In 1164 Friedrich Barbarossa made the city the residence of his Antipope Pascual III. Since 1172 Viterbo grew and prospered, the city walls were moved, expanding the size of the city, the population grew to 60 thousand inhabitants.

In the XII century was built the Cathedral of San Lorenzo (Duomo di San Lorenzo), on the site of an older church destroyed during the earthquake, before the church was a pagan temple dedicated to Hercules. San Lorenzo Cathedral

The XIII century passed in a struggle between two noble families, the Di Vico and the Gatti. Emperor Frederick II persuaded the townspeople to side with the Ghibellines, and when they did not agree to support him, he besieged the city, but to no avail. Thus Viterbo finally became Guelphic.

Pope Alexander IV lived in Viterbo from 1257 to 1261. His successor Urban IV was also elected to Viterbo. In 1266-1268 . Clement IV chose Viterbo as the base for a ruthless battle with Hohenstaufen, prince of Conradin, who claimed the Italian throne.

Pope Gregory X (1271), John XXI (1276), who died in the collapse of his bedroom ceiling; Nicholas III, Martin IV were elected to Viterbo. An interesting event happened in the 13th century: the cardinals were unable to elect the next pope for three years, and, when the people had already lost patience, the captain of the Guards, Raniero Gati, locked the cardinals up, saying that he would open them only after the pope was elected. Bread and water were thrown to the cardinals through the dismantled roof. A few days later a new pope was elected, Gregory X (1271). Thus was born the conclave – a closed (literally) session! Five conclaves were held in Viterbo. During the last one Martin IV was elected, it was the most troublesome conclave, with the arrests of two cardinals, but since the people and most of the clergy were against the French pope (and Martin was French), the new pope had to flee to Orvieto. After this incident, the popes avoided Viterbo for 86 years.

READ
Agadir, Morocco: where is it, when to go, what to see

From then on the city lost its importance and became an ordinary Italian town, which in 1871 became part of the united Italy.

Madonnas of Rome Rome is an amazing city, it hides many treasures, secrets, historical evidence and art values. Walking through the streets of Rome, you can go from one century to another, ancient ruins, medieval churches, ancient palaces. Lift your head and look around, many palaces are decorated with small niches, in which images of the Madonna are placed. We will talk about them in our article.

Bernini vs Borromini Gian Lorenzo Bernini (1598-1680) and Francesco Borromini (1599-1667) are two architects whose names are inextricably linked with Rome and thanks to whom the Eternal City has received a rich heritage in the Baroque style. The architectural rivalry between these two geniuses was to Rome’s advantage. Both are absolutely different, but they were similar in that they created masterpieces that would seduce and captivate people at any time throughout history.