Sukhothai Historical Park is the ruins of the ancient capital of the Sukhothai Kingdom. Sukhothai has many temples, though some in a dilapidated state, but still revered by Thais, people still come to some of the temples to pray to the Buddha. In this article I will talk about the main attractions Sukhothai, what is worth seeing and what you can miss, how to get around and share other useful information. 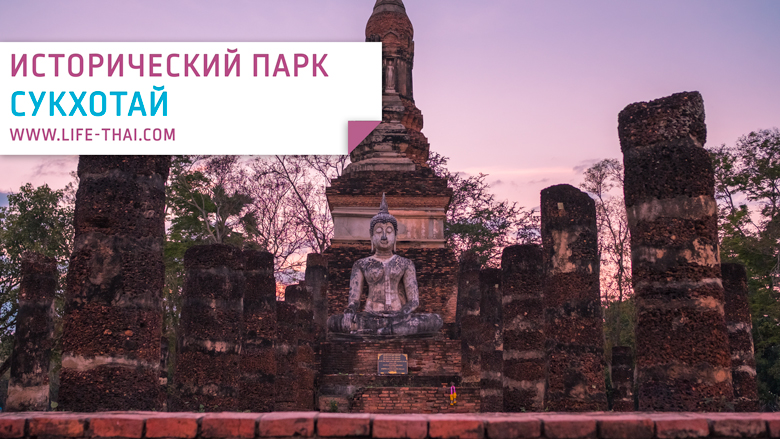 A little history of Sukhothai

I won’t go into much detail about the history of Thailand, but only what matters.

The history of Sukhothai dates back to the Khmer settlement of “Dawn of Happiness” captured by the Thais and became the center of the kingdom of Sukhothai. It is believed that it was in Sukhothai that the foundations of the Thai state system were laid. 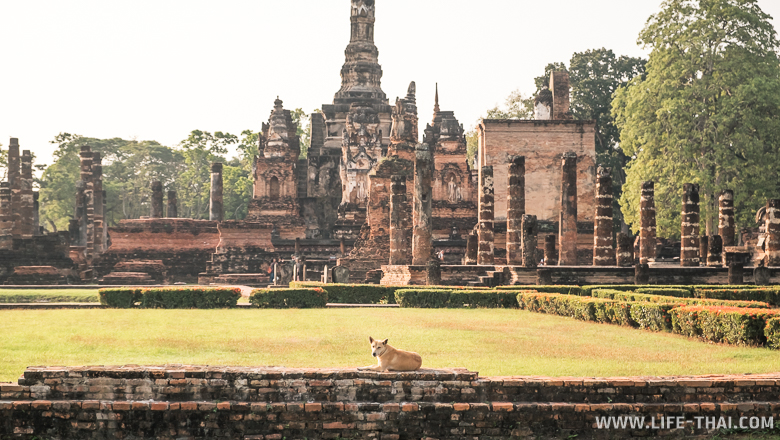 King Ramkampheng not only expanded the borders of the state to the banks of the Mekong and Ligor Rivers, but also proclaimed Buddhism as the state religion, invented the Thai alphabet, supported the development of craftsmen, developed political relations with China and brought porcelain masters from there.

It is said that King Ramkampheng said to set up a large bell in Sukhothai, which could be struck by anyone who was unjustly wronged. If the bell rang, the king would personally take it upon himself to judge who was right and who was wrong.

The Thais have great respect for King Ramkampheng and have called him “the great” ever since.

The park consists of 3 parts: the central, western and northern. The largest number of attractions are concentrated in the central part of the park. If you have a desire, many small dilapidated temples can be seen outside the park.

What’s interesting in the central part of the park 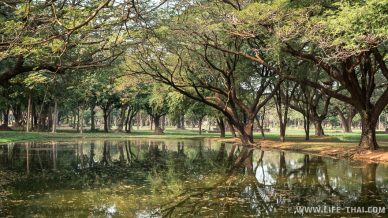 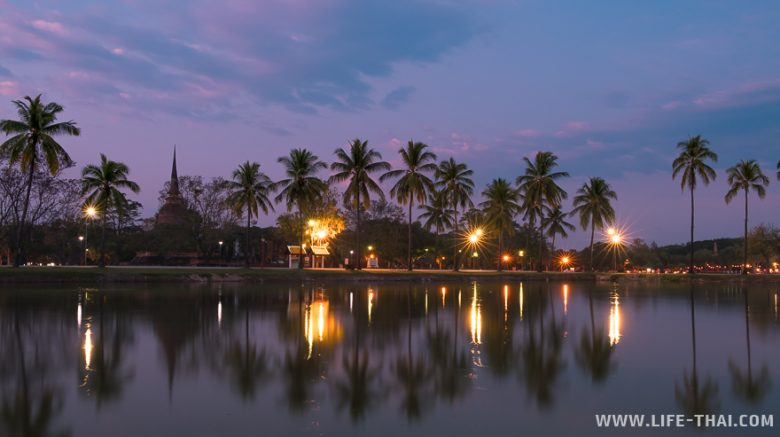 In the evenings on the shore of the magnificent pond (yes, so immodestly Thais called his pond) working evening market with food and souvenirs: 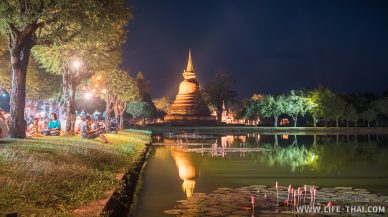 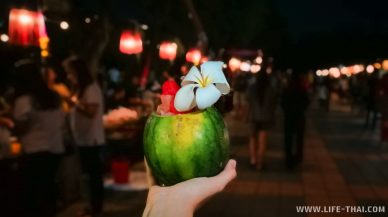 For those who like to take pictures: stupas in the park beautifully illuminated after dusk. You can take good pictures: 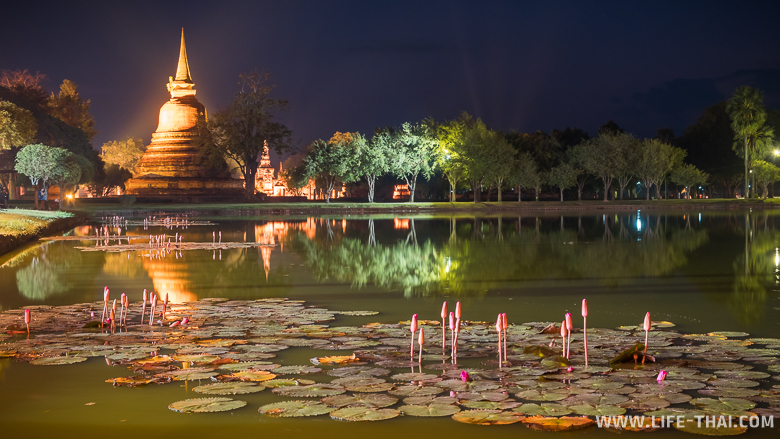 Landmark temples that are a must-see: 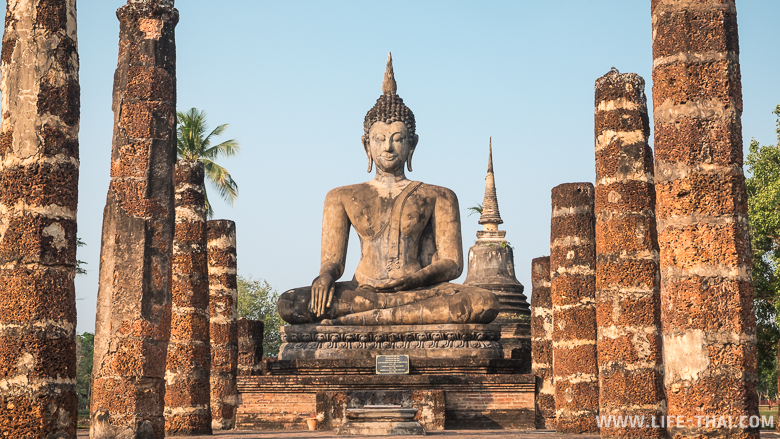 Wat Si Sawai is originally a Khmer temple with three prangs dedicated to Shiva and converted into a Buddhist temple. One of the oldest temples, founded in the early 13th century. Its walls are made of laterite. 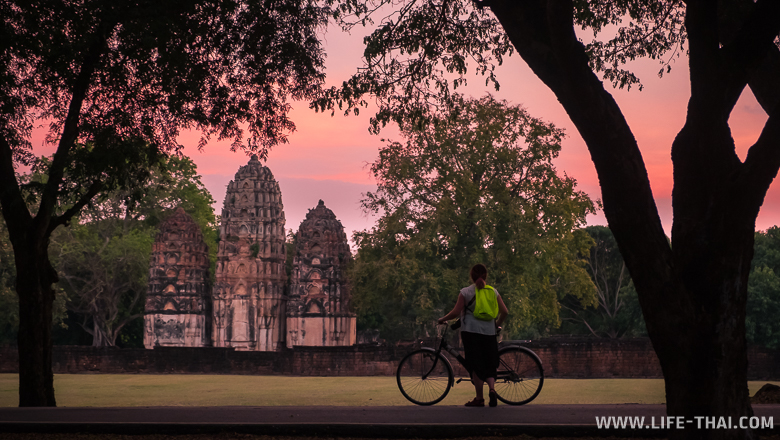 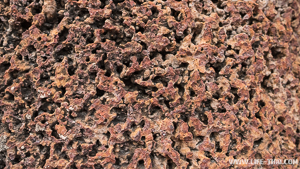 This is what laterite looks like: a porous rock, to the touch – you can even cut yourself.

Laterite is rich in iron and aluminum. The red hue is rust.

Laterite is characteristic of the tropics, where it is hot and humid. Laterite has been used in many places as a building material.

Wat San Da-Pha-Daeng is believed to be the oldest structure in Sukhothai (12th century).

The iconic temple of the northern part of the park

Wat Si Chum is the most stunning temple. If you’ve been to Thailand, you may have seen a monk near the giant hand of Buddha on postcards. The same Buddha statue from the postcard is at the Si Chum Temple. The statue is called Phra Achan, and Thais come to worship it. 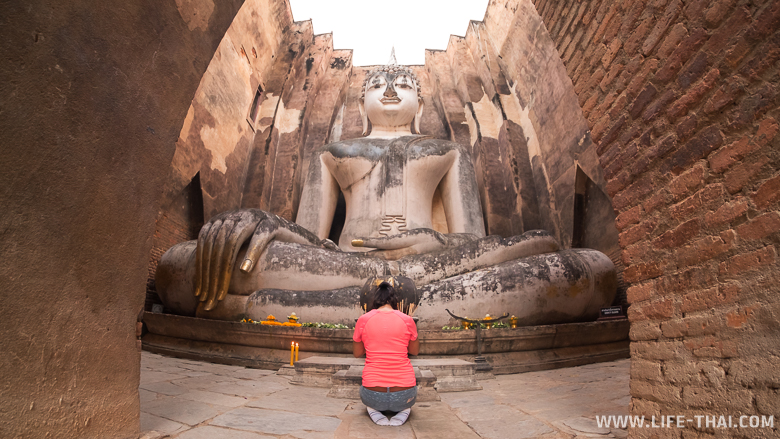 Wat Si Chum is the kind of place where you instinctively begin to speak in whispers, where you feel calm all over your body, and where you don’t want to leave. For me, Wat Si Chum was the temple worth going to Sukhothai for. 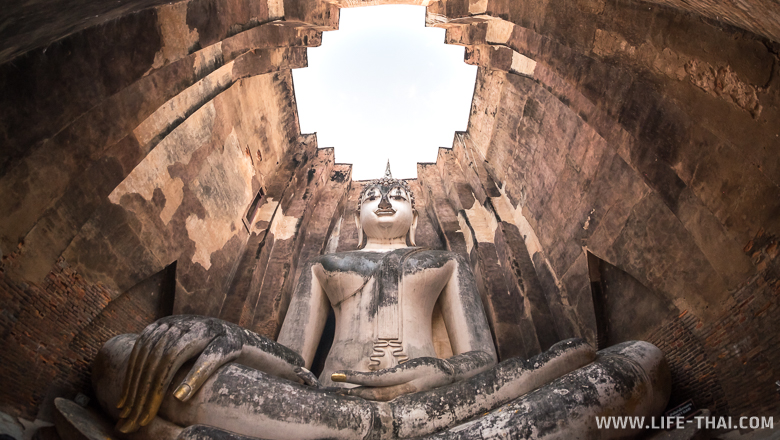 The western part of the park

Wat Saphan Hin – a temple with a huge Standing Buddha on top of the hill. Not particularly impressed, but from the top there is a panoramic view of the surrounding area. They say it’s a good place to meet sunrises. 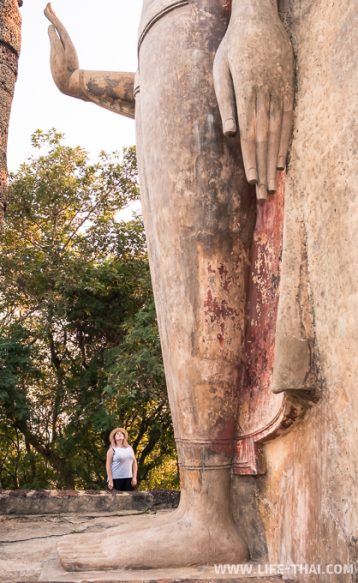 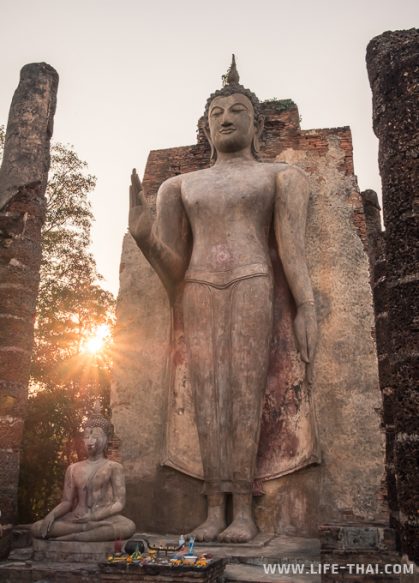 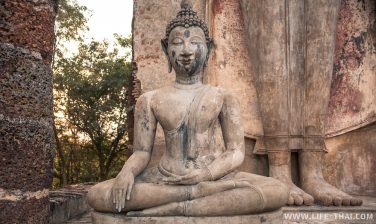 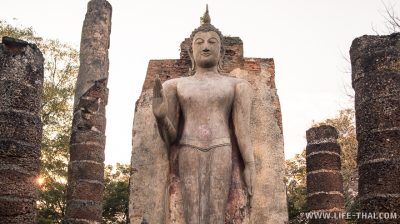 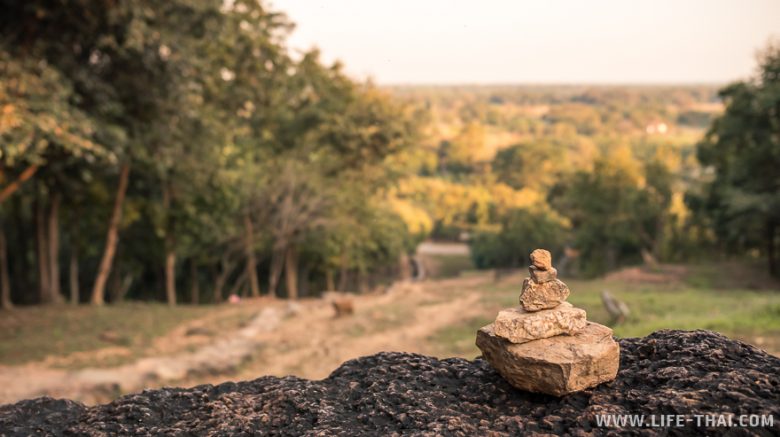 Temples outside the park

Outside the park there are many small, more or less well-preserved temples. We looked up what kind of temples they are on Google Maps. The only one that sparked interest was the elephant temple or Wat Chang Lom .

Ayutthaya or Sukhothai? Which is more interesting?

Sukhothai is often compared to Ayutthaya: both are ruins and temples. Is it worth going to Sukhothai, considering its location?

I can honestly say that Ayutthaya is more impressive. They even made movies there, everything is so entourage, and decapitated statues of Buddha left after the Burmese seized the city, it gives you goosebumps when you try to imagine what was happening there. One of Thailand’s calling cards, the head of the Buddha braided with tree roots, is in Ayutthaya. But there’s something you won’t see in Ayutthaya.

In Sukhothai, there are several clearly Khmer buildings: they differ from all other buildings scale, immediately reminds of Angkor Wat.

Near Sukhothai is a stunning park Si Satchanalaya, and if you compare all 3 parks, Si Satchanalaya is the least known, but the most beautiful and most interesting. There will be a separate article about it. 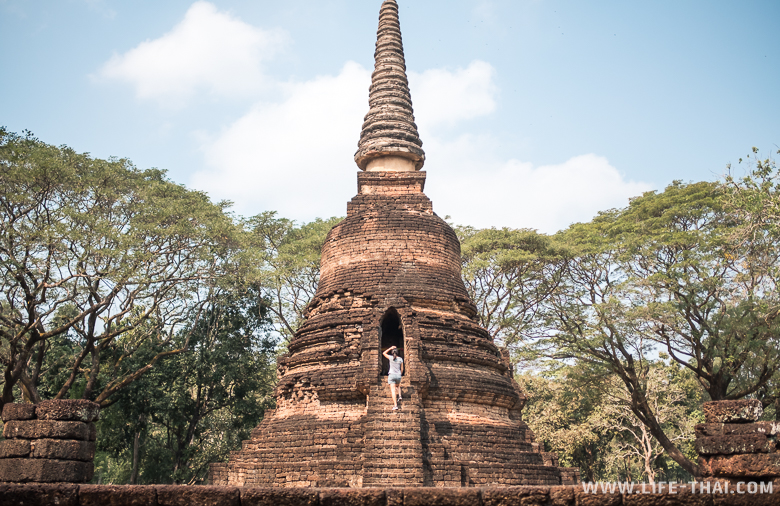 So where to go: Sukhothai or Ayutthaya? If you have not been to Angkor Wat before, either park will impress you, choose the one that is easier to get to.

If you have already been to Angkor Wat, then Ayutthaya will be enough. If you are a particular fan of Thai history and culture, Sukhothai and Si Satchanalaya are a must visit.

The park consists of 3 parts: central, western and northern, each of which costs 100 baht to enter + 10 baht for transportation.

The park is open from 6-30 to 19-30. The best time to visit: before 11 am and after 4 pm. The sunset is beautiful to watch from the opposite side of the Magnificent Pond from the temple of Wat Sa Si. 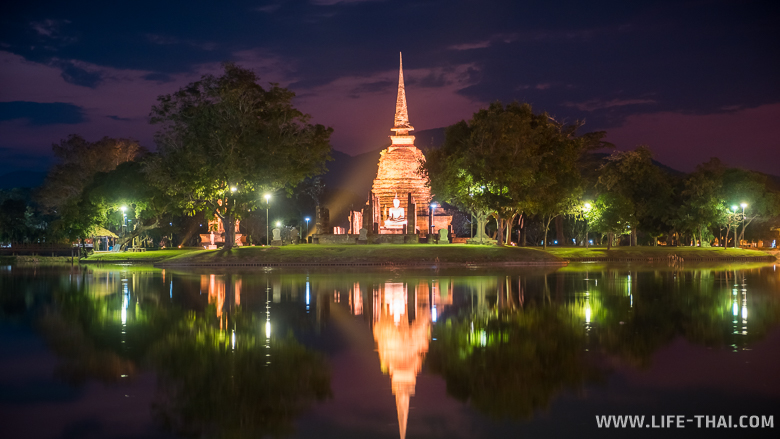 Lifehack: After 6 pm, tickets are no longer checked and you can enter any of the areas for free.

Plan of the historic city of Sukhothai. The areas that are charged separately are marked with different colors: 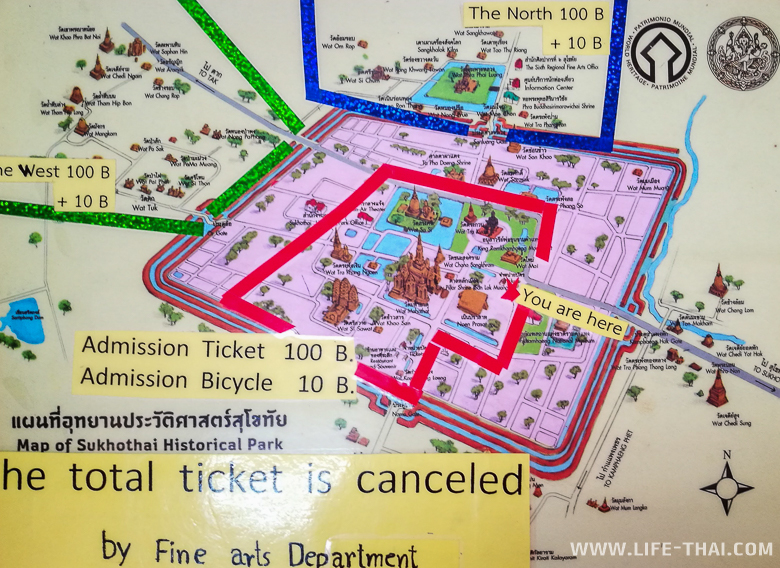 The entire park can be seen in 1 day. We walked around the park for a day and a half: one evening and one full day. Near the park there are beautiful rice fields and a natural national park: if you come to Sukhothai for a week, you can diversify the temples and statues with natural attractions.

The park is 12 kilometers from Sukhothai town, and if you go to Sukhothai for the historical park, it makes no sense to settle in town. We stayed next to the park at Baan Pasathai Geste. A double room with breakfast cost 690 baht ($22). The hostel has a very good location and clean, spacious rooms.

From Baan Pasathai to Sukhothai Park is only 15 minutes walk (1.6 km) and 5-7 minutes by bike. The hostel has free bikes, but not all are in good condition. A few more good gestas near the park:

How to get to the park and what to do.

If you stay near the park, you can either bike or walk to the park.

You can either walk in the park, though only in the central part, or ride bicycles: there are plenty of paths and distances to ride.

READ
The 5 Best Beaches in Jamaica

To the temples, which are behind the square – the central part – it is better to get either by bike or moped / car.

Sukhothai Park on the map:

Hi, my name is Tatiana, and I’m happy to see you on the Life is Unpredictable! blog. I love to travel, and on the blog I share my experiences, tips, and other helpful notes.