The Baths of Caracalla in Rome

The Baths of Caracalla are a monumental building, constructed in Ancient Rome at the beginning of the 3rd century A.D. Looking at the gigantic ruins of the Thermae, it’s hard to even compare them to such a simple worldly concept as a bath. From this article you will learn about the history of the structure, its modern state, how to visit the Thermae of Caracalla in Rome, what their operating mode and ticket price are.

History of the Thermae

The Thermae got its name from the name of the Emperor Caracalla who built them, or more precisely, from his nickname. In fact, the emperor’s name was Marcus Aurelius Antoninus (not to be confused with Marcus Aurelius of Antoninus dynasty), and he got his nickname for his love of the Gallic coat with a hood up to his feet called Caracalla.

Strictly speaking, the construction of the baths began in the time of Caracalla’s father and ended in 217. – after his death. And for almost the whole period of construction the emperor was on military campaigns far beyond the territory of Rome.

The thermae were amazingly magnificent even for the sight-seeing Romans.

The period of building the thermae became a reference point until the decline of the empire, torn by civil strife and popular unrest.

The early 3rd century was marked by a state of peace facilitated by Caracalla’s father, and in order to distract people from political and social problems, it was decided to build a new complex of thermae.

The concept of the idea was not original: at that time there were already several imperial thermae and many smaller ones functioning in Rome.

Therefore, to impress the people of the city, who were unsatisfied with all sorts of shows, he had to rely on a scale that had never been done before. The area of the courtyard was a square of 400×400 m, and the building itself measured 150×200 m.

READ
Milan, Italy - one of the largest cities of Lombardy, and the capital of this region

In Roman culture, thermae were not just baths, but also the heart of social life. Often people came here not only to wash, but also to solve important problems, negotiate, and even to weave plots. Caracalla’s thermae became a real entertainment center for the Romans.

It had its own library, gardens, amphitheatre, gymnasium for physical exercises and stadium. And the construction of the complex was designed in such a way that the stadium was visible directly from the bathing halls and the visitors could observe the event without leaving the premises.

The interiors of Caracalla’s Thermae in Rome were a work of art in themselves. To entertain the eye the floors and walls were lined with marble and glass mosaics, and along their entire length in deep niches stood magnificent sculptures.

Some of them survived to this day: the famous Apollo of Belvedere and the composition of the Bull of Farnese are now in the Vatican Museum and the Archaeological Museum of Naples respectively.

Structure of the Thermae

The baths themselves were a series of rooms for various purposes. In the center was the frigidarium, a cool, roofless room for recreation.

Behind the tepidarium was the tepidarium, the ancestor of the sauna, a room with dry hot air, followed by the caldarium, a round hall with a pool in the middle filled with warm water. There were also small rooms in the complex for those who wished to bathe alone.

Termes in Roman culture were the heart of social life.

Downstairs were the technical rooms and furnaces that kept the thermae running. Water came here from a spring in the valley of the Anio River through the Marcius Aqueduct built a few centuries earlier. Under Caracalla a branch was made from it, supplying the baths’ cisterns with clean, cold water.

READ
Cave of Lascaux is a prehistoric art site in France

With the withering of the Roman Empire, Caracalla’s thermae also fell into decline. The lands suffered from frequent barbarian raids, and the once richest state could no longer maintain all those incredible structures in proper condition.

The thermae closed in 537 and were abandoned. They were so forgotten that subsequent generations did not even know the purpose of the colossal complex.

Mosaic Floor of the Thermae

Interest in the building returned only in the 16th century. For a long time the baths were called Antoninus’ Palace, which is not surprising given the scale of the complex. At that time people could not even imagine that these strong walls belonged to the baths.

By the way, it is thanks to a special construction technology they are so well preserved. Concrete was poured between two layers of masonry, and once it set, the construction was so strong that it was extremely difficult to break it.

Today the Thermae of Caracalla, in addition to the museum complex, serve as an additional site for the Roman Opera House. A stage and auditorium were built on the archaeological site.

Since 1937 performances have been held here, mostly during the summer season from June to August. Ticket prices are quite affordable – starting at 20 euros.

In 1960 – during the Olympic Games in Rome – even track and field athletics competitions were held here. So we can say that to some extent even today the Thermae of Caracalla performs its former function.

Opening hours and how to get there

The Baths of Caracalla in Rome are open every day except Mondays, December 25th and January 1st. The opening hours of the archaeological complex are as follows:

READ
Visiting Florence on foot: an easy itinerary through the historic center

You can enter no later than one hour before closing time.

The price of an adult ticket is 8 euros. Tickets can be bought at the ticket office.

Address of the Terme: Viale delle Terme di Caracalla. To get to the complex you can take the Metro Line B, getting off at Circo Massimo station.

Useful articles on the subject

The Baths of Caracalla 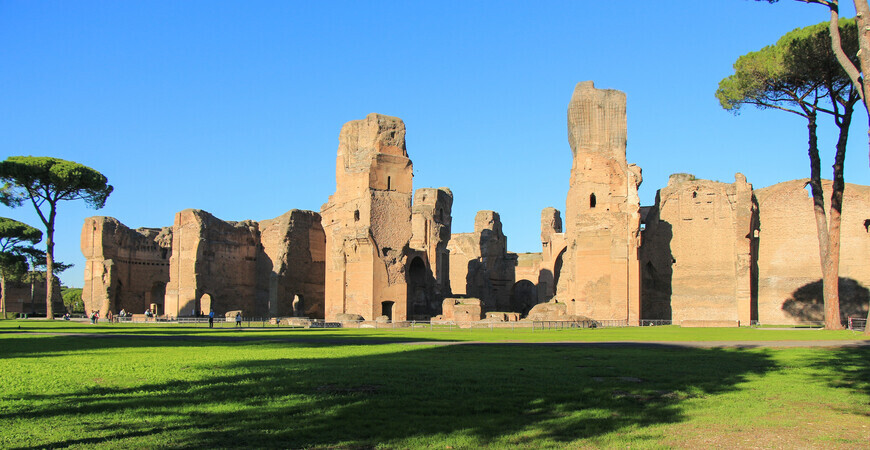 The Baths of Caracalla are one of the largest thermal complexes of ancient Rome, in other words, the Roman baths. The unique attraction is amazing for its size – thermae are spread over an area of 25 hectares, which is approximately 400 by 400 meters.

The huge stone blocks that were the center of social life in the city quickly gained popularity – here you could not only bathe or warm yourself, but also come to discuss important issues of social life. The water in the baths came from mountain springs and was as pure as possible. The ruins of the largest bathing complex of ancient Rome have many ancient walls, preserved pools, mosaics, painted plaster.

Panorama of Caracalla’s Thermae in Rome on Google Maps:

The architecture of Caracalla’s thermae was stunningly beautiful. It was possible to enter the complex through the huge arch of the main entrance, which was lined with marble and bronze. Then there was a large room with several pools with water of different temperatures: warm, moderately warm and cool. In other rooms guests of the thermal complex were offered massages, sport games, different shows and socializing, and there was also a library.

The walls of the thermae were made of Roman concrete – first a mold was prepared of stones and bricks and then concrete was poured into it. Thanks to this the walls became very strong. Inside the walls were lined with marble, and there was a vault above the building which was supported by wide columns and the walls themselves. The dome had a small circular aperture, into which steam escaped and from which light descended. The structure had big windows with frosted glazing, and beneath the halls there were utility rooms from which the floors were heated.

The baths were richly decorated with sculptures and works of art, the most popular of which were the statues of Hercules resting, the statue of Flora and the Farnese bull.

The Archaeological Museum of Naples now houses some of the surviving sculptures.

Today, the Thermae of Caracalla appears to visitors as a cluster of ruins that even without explanatory tablets it is impossible to understand where certain rooms were. During a tour of the thermae you can buy an audio guide for 7 euros, which is available in Italian, English, French, Spanish and German.

Thermae got its name from the name of the emperor who built them, or rather from his nickname, and his name was Marcus Aurelius Antoninus. The emperor got his nickname for his love of the Gaulish long hooded cloak called Caracalla.

The construction of the thermal complex began in 206 during the Roman Emperor Septimius Severus and lasted until 217 AD, after the Emperor’s death. It was then that it was decided to open the thermae to the public, during which time the Emperor Caracalla was in power.

The Thermae of Caracalla was a grandiose complex of ruins, testifying to the high level of development of Roman civilization. The premises of the baths could accommodate more than 1,500 people at a time. In 537 the barbarians blocked the Roman aqueducts and many of the thermae, including the Thermae, began to decline. The period of oblivion lasted until the 16th century, when Pope Paul III Farnese began to excavate the former baths in order to obtain building material for the construction of a new palace. It was then that two statues of Hercules and two porphyry baths were found, one of which today serves as a fountain bowl in Piazza Farnese, and the other is kept in the Vatican. A granite column was also raised to the surface, which was later presented to the Medici dukes.

READ
The most unusual pools in the world

The baths were restored several times, but finally they completed their work in 537 AD. Since the 16th century archeologists and historians began to take interest in the thermal complex, who found on this site many ancient sculptures. In 1960, this area was used for athletics competitions during the Rome Olympics.

From 1937 to the present day, the Thermae of Caracalla is a museum complex and serves as an additional venue for the Roman Opera: opera and pop singers and bands perform on its stage. There was even erected an open-air stage and equipped seats for 20,000 spectators. During the summer season performances are given on the territory of the complex.

Learn the schedule of events and get up-to-date information on ticket prices on the website.

In addition, this famous landmark of Rome is a favorite place for wedding photo shoots. Such a city, as well as Italy in general, has become one of the popular destinations of wedding tourism.

Considering that organizing a wedding in Rome is not such a troublesome affair thanks to wedding agencies, it is quite understandable the large flow of those wishing to make this memorable day even more special.