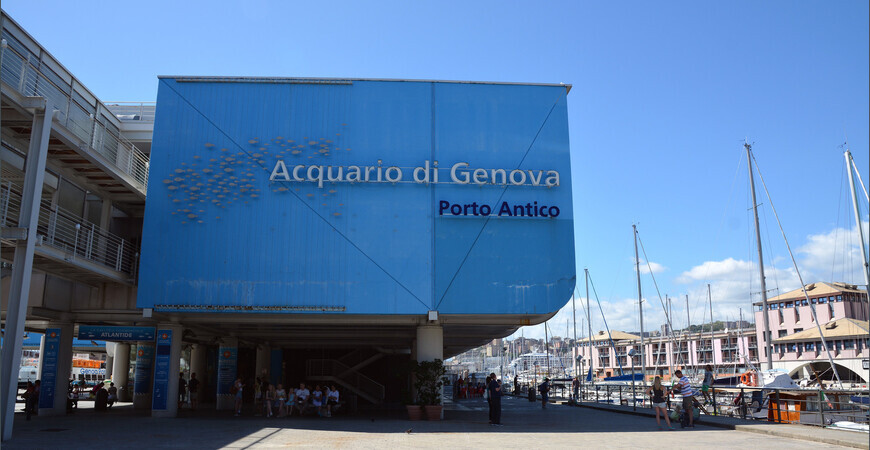 The Aquarium of Genoa is the largest in Italy and one of the largest in Europe. It occupies an area of 3100 square meters near the old port of the city. Every year it receives over 1.2 million visitors.

The Aquarium was built in 1992 to mark the 500th anniversary of the discovery of America by the most famous native of Genoa, Christopher Columbus, which explains the architectural design of the building, shaped like a ship. The architect Renzo Piano was responsible for the design of the aquarium. In 1998 to the main building of the aquarium was attached a hundred-meter ship, with which it was connected by a special bridge. There are a total of 70 tanks in the aquarium, the total volume of which reaches 6,000,000 liters of water.

The Genoa Aquarium is open daily from 10:00 to 20:00 in the low season, with the last entrance at 18:00. During the high season the opening hours are extended from 08:30 to 21:00. There are four route options: “Aquarium Only”, “Aquarium Village”, “Planet Aquarium”, “Galatacquario”. Depending on the chosen route and the season, the cost of tickets for adults ranges from 22 to 34 euros, for children aged 4-12 – from 14 to 24 euros. You can also buy separate tickets for the biosphere exhibit and the Museum of the Sea. They are all purchased online for a specific day and can only be used on a specified date.

Do not forget that it is better to combine the entertainment program with sightseeing, so you get twice as much experience. You can visit the Genoa Aquarium not only on your own, being in Genoa, but also from neighboring cities, for example by booking excursions from San Remo.

READ
Borneo, Malaysia: where is it, when to go and what to see

On the official website of the Aquarium in Genoa, you can find the recommendation that the visit should be planned for 2-3 hours. In fact, a whole day is not enough to see all the biodiversity of the species represented here. There are marine animals from all over the world, from Antarctica to the equator.

The Blue Planet Hall opens the visit with a unique film about the animals living in different parts of the continent. Their habitats are illuminated on a huge map on the adjacent wall, allowing you to fully appreciate the role the seas and oceans play in the life of the planet.

For a deeper dive into the underwater world, you can visit the 3D room. Here the effect of a real journey through the waters of the various seas and oceans of the Earth is created. Despite the fact that the aquarium exists for over twenty years, not only are new species constantly appearing, but whole thematic halls are opened, for example, dedicated to sturgeon fish or coastal waters of the North Pacific.

Among the species living in the Genoa Aquarium there are some very rare ones. For example, manatees, which feel great here and even successfully breed in captivity.

Young visitors are invited to try their hand at creating their own species of fish. In the special Fishmaking hall they have game consoles at their disposal, where they can make their own fish from various parts, choose its coloring, size, habitat and other features.

Some of the halls are dedicated to animals that live not only in water, but also on land. For example, the “Tropical Forest” zone includes 150 species of exotic plants, frogs, geckos, turtles, etc. And with the help of electronic reproduction it is possible to be carried over to the Madagascar jungle for a while.

The Genoa Aquarium has everything you need to spend the day in comfort. Outer clothes can be left in the checkroom. Visitors with babies can use changing tables in different parts of the buildings. All areas are equipped for the comfortable movement of people with disabilities.

The aquarium has several souvenir stores, as well as a photo area. There is even a lost and found in case visitors forget something of their belongings in the halls from excessive impressions.

There are often drink and snack machines on display. There are plenty of cafes and restaurants, including outdoor ones with great views of the water. A specially equipped picnic area on the deck of the ship offers comfortable seating for those who have brought their own food.

How to get to the Genoa Aquarium

The Genoa Aquarium is close to the center of the city and the main attractions, as well as in close proximity to the port of Genoa. The nearest metro station “San Giorgio” is only 300 meters from the entrance to the building. Nearby is the bus stop “Turati/metro San Giorgio”, where every 10-12 minutes comes bus number 13 from Prato/Pian Martello. And the stop “Caricamento/acquario” is 100 meters from the entrance, and the aquarium can be reached by buses number 1, 9, 32, 635. At half a kilometer is the Funicolare Zecca-Righi funicular station, which connects the area with the neighborhoods above.

Two kilometers on foot or two metro stops is the train station “Genova Brignole”. It connects Genoa with Milan, Turin and other cities.

Arriving to the Genoa Aquarium by car you can use the covered parking lot “Park Marina Porto Antico”, located nearby. You can reach the aquarium in comfort by cab, for example with the AppTaxi or Uber apps.

Journey to the ocean: Aquarium of Genoa 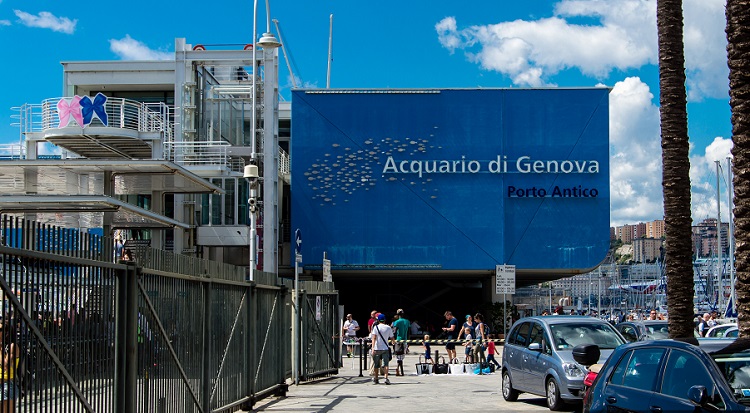 The Science and Entertainment Center Acquario di Genova was built in 1992 on Ponte Spinola, near the harbor of Genoa. The year the Genoa Expo was held in Genoa, so the opening of the center was in conjunction with the exhibition. The exhibition was dedicated to the famous native of Genoa – Christopher Columbus.

The project was designed by Renzo Piano, an Italian architect who creates masterpieces in high-tech style. The oceanarium building is made very unusually – it resembles a ship about to be launched into the water. Because of this its nickname is “Grande Nave Blu” (The Big Blue Ship).

The interior decoration project was designed by Peter Chermayoff, and British designers from the Cambridge Seven Associates design group were involved in the decoration.

The original idea for the oceanarium was to cover the Ligurian and Caribbean seas as well as parts of the Atlantic Ocean – in other words, the route Christopher Columbus took on his journey to the New World. 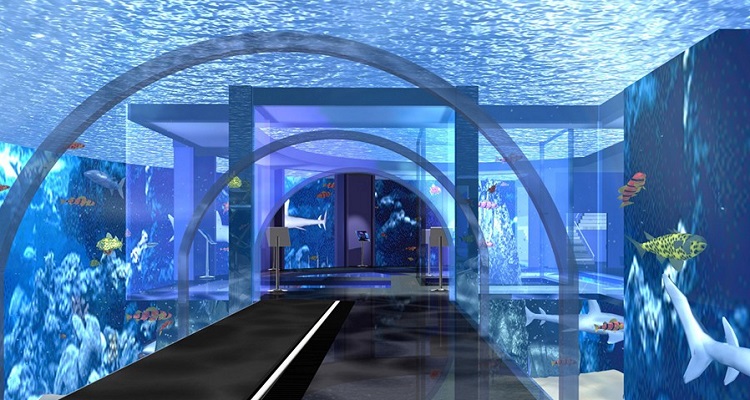 Later the organizers of the Aquarium decided to slightly expand the geographical scope and show all the richness and diversity of the ocean depths.

Acquario di Genova is considered the second largest in Europe – the first place belongs to the Oceanarium of Barcelona.

How is the beach holiday in Genoa organized? On the pages of our website we will tell you about the best beaches of the city and hotels on the coast.

Do you know which violin famous composer Paganini bequeathed to the city of Genoa? In this article you can find out where the famous instrument is kept.

Find out where the famous Lake Como is and what you can see in these beautiful places here: https://expertitaly.ru/polezno/geografiya/ozero-komo.html .

Walking around the landmark

The Acquario di Genova contains more than 70 water tanks, 39 pools and more than a thousand species of marine fish.

All of the aquariums and exhibits in the halls of the Oceanarium are quite voluminous, and faithfully reproduce the topography of the ocean floor and the environment.

The Aquarium itself is located on several floors, so for the convenience of movement the building is equipped with elevators and elevators.

Right at the entrance to the halls in the huge aquarium manatees begin their leisurely dance. They perform inconceivable pirouettes in the water, attracting the attention of visitors.

All expositions allow you to see the ocean floor (or rather its reconstruction) to the smallest detail – reefs, seaweed, corals and all the inhabitants of the underwater depths. 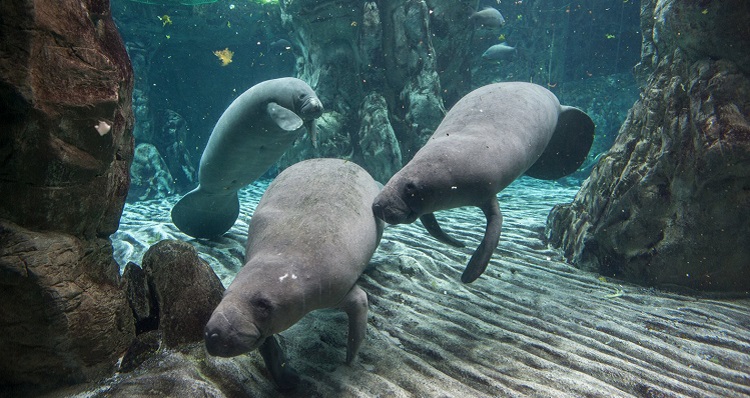 Seals, jellyfish, moray eels, crabs, sea urchins, starfish, sharks… There are a lot of animals here! For convenience the exhibitions are divided thematically – “Tropical Seas”, “Cold Seas”, “Salt Water”, “Fresh Water”, “Mediterranean Sea” – and are designed to familiarize the aquarium visitors with these ecosystems. There is a separate aquarium with jellyfish, and thrill-seekers will enjoy the aquariums with piranhas or caimans.

There are also quite exotic inhabitants of the ocean and sea depths: four-eyed fish (Brazilian four-eyes) or fish able to move on land (mudskippers). Flocks of small, colorful fish add bright colors to the ocean panorama. 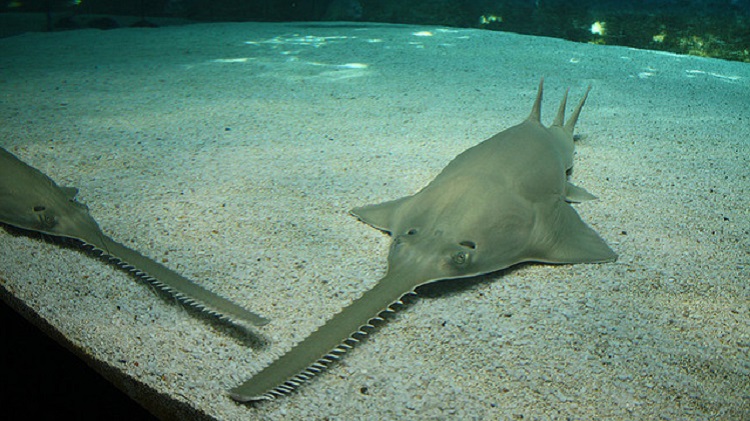 There are two parking lots near the Aquarium – one near the entrance and one a little farther, near the maritime museum.

Next to the Aquarium is another exhibit – Biosphere, a round glass ball that contains the ecosystem of the Amazon. Here you can see exotic vegetation of Amazon forests and their no less exotic inhabitants – cockatoos, iguanas, Mexican butterflies, chameleons and others. If you dreamed to plunge into the world of evergreen tropics – be sure to visit the Biosphere.

The Aquarium has decided not only to interest visitors in the diversity of the oceans, but also to draw attention to current environmental issues.

READ
The 12 most beautiful places to visit in Israel 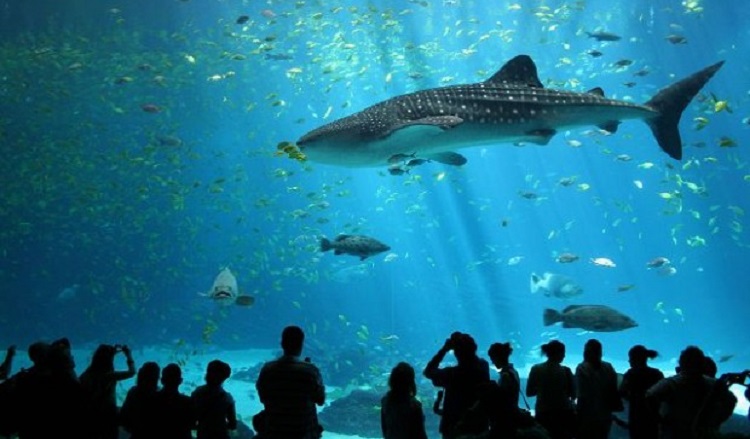 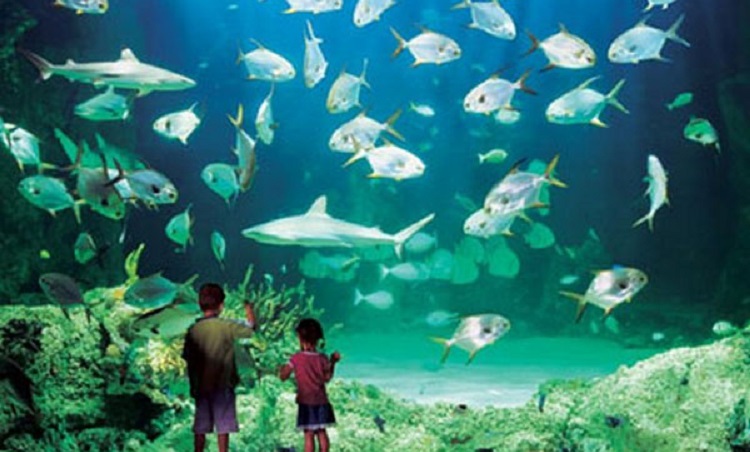 On our site you will also find out what Taormina in Sicily is famous for, and we also offer you an overview of the city’s hotels.

In our next article you will find everything about vacationing in the Italian town of Rimini, as well as some tourist reviews about it.

Did you know that in the city of Pisa there is “Piazza della Miracle”? Read about the attraction in our special article: https://expertitaly.ru/dostoprimechatelnosti/piza/krasivye-mesta.html.

For visitors the Acquario di Genova opens on weekdays at 9 a.m. and works until 8 p.m., on Saturday and Sunday from 8:30 to 9 p.m.

The Acquario di Genova is open every day except two days of December 24 and 25, which are the Christmas holidays.

The ticket for adults costs 27 euros, for children 19 euros (children’s age from 4 to 12 years). Children under the age of 3 years can pass for free when accompanied by an adult.

Discounts for group tours are possible for schoolchildren – the ticket price for each person will be only 12 euros. 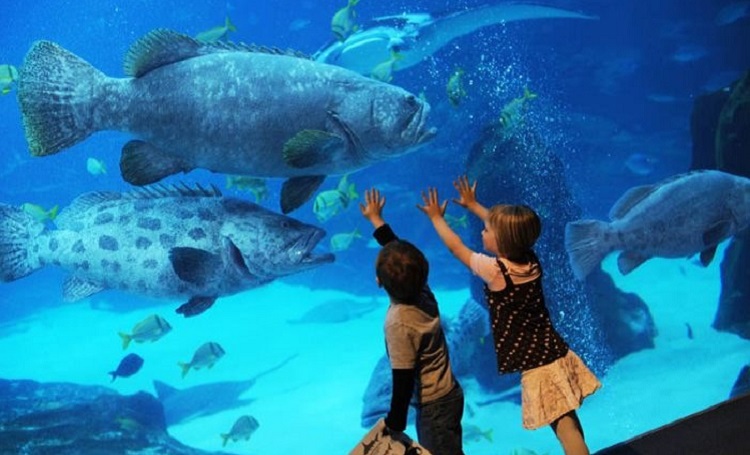 People over 65 years are also offered discounts to visit the Aquarium.

You can walk around the aquarium on your own, or you can be accompanied by a guide. The whole tour program takes about 2.5 hours.

If you buy the ticket, you are entitled to a significant discount on the nearby Biosphere and the Bigo Panoramic Lift, from the top of which you can see the whole of Genoa as if in the palm of your hand.

In this video you can see the inhabitants of the Aquarium of Genoa with your own eyes:

Where is it located, how to get there