Vietnam is one of those countries that attracts tourists primarily with its resorts and beaches. However, there are a number of historical and cultural attractions in Vietnam, without visiting which the idea of the country will be incomplete. We offer you the best attractions of Vietnam, which should visit the tourist. 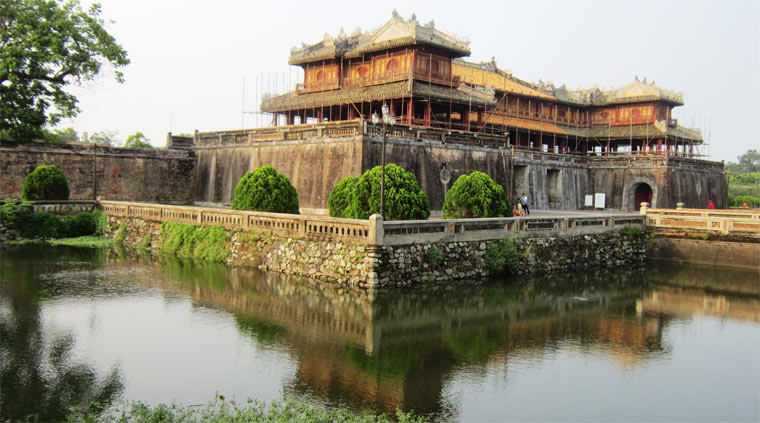 One of the main attractions of Vietnam is the Imperial City, located in the heart of Hue. It takes a whole day to see all of its secluded corners with its quarters, palaces, pagodas and gates. This was once the residence of the imperial family and important political issues were decided in the Palace of Supreme Harmony. Inside the palace you can see ancient objects with unique wood carvings, and the emperor’s golden throne, which visitors are sometimes allowed to climb on. You can also take pictures and even dress up in royal robes. Of interest are the “Nine Sacred Guns” – dynastic artillery cannons cast in bronze. They symbolize the defense of the country and are dedicated to the five natural elements. The structures of the imperial city were badly damaged during the U.S. bombings, so now UNESCO is actively working on the restoration. 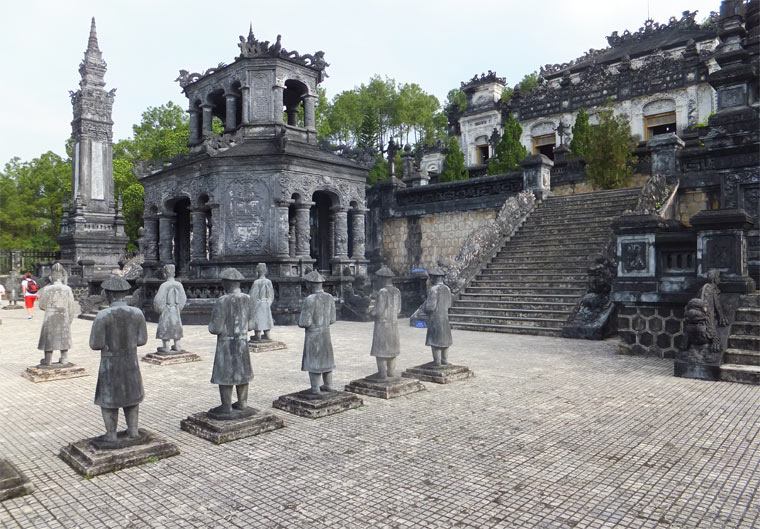 The next interesting tourist spot in Vietnam on our list is the Khai Dinh Tomb in Thua Thien-Hue Province. This is one of the most interesting tombs of Vietnamese emperors: it harmoniously combines elements of both European and Asian architecture. During the reign of the Hung Vuong dynasty, High Dinh was buried in the palace. The tomb is beautifully decorated with glass bas-reliefs, a gilded figure of the King, lanterns, peacocks and engravings on the walls and ceilings. The entrance is guarded by sculptures of warrior defenders and statues of elephants, the emperor’s loyal companions. Tourists are attracted by the atmosphere of tranquility that reigns here, the birdsong in the area and the stunning views that open from the upper terraces. Although the complex itself is not even a hundred years old, the warrior statues look ancient: the rainy season and the gray-black stone of which everything is built make the place magical over time. 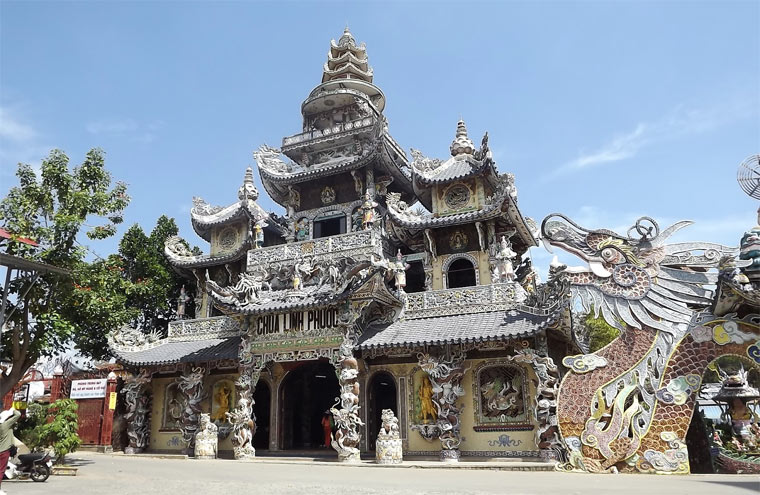 Linh Phuoc Pagoda is a relatively young but must-see Vietnamese attraction. It is located in the suburbs of Dalat. This Buddhist temple began to be built in the middle of the last century. The external appearance of the pagoda is impressive and very different from all other pagodas in Vietnam by the material of which it is built. All of its decoration is made up of millions of tiny shards, and as construction continues, broken crockery continues to be brought in to this day. From all this are formed motley and multicolored mosaics on the walls, columns, statues of deities and dragons. The central building of the complex is a 7-story bell tower with a statue of Buddha on each floor. The above-ground part of the complex is a heavenly paradise, going down into the basement of the pagoda you can go through all the levels of hell. 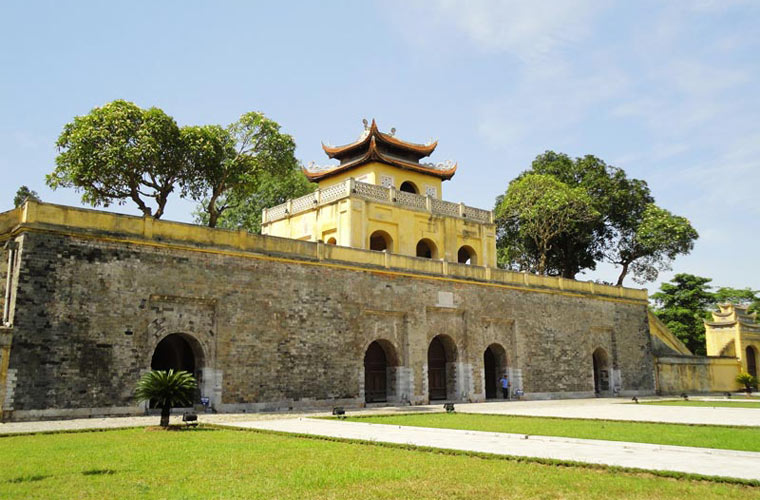 The territory of the Hanoi Citadel occupies a vast strip of land in the center of the city. This place is a cultural complex, which includes the royal quarters of various dynasties and old buildings dating back to the Ly dynasty. In 2010 the citadel was designated a UNESCO World Heritage Site and is open to visitors. The central part of the citadel includes several ancient sites: the Qin Thien Palace, the southern gate, and the stone staircase. During archaeological excavations, numerous artifacts and relics of ruling dynasties were discovered. The oldest of them date back to the 11th century. Although much of the area has been explored, in some places still being excavated. 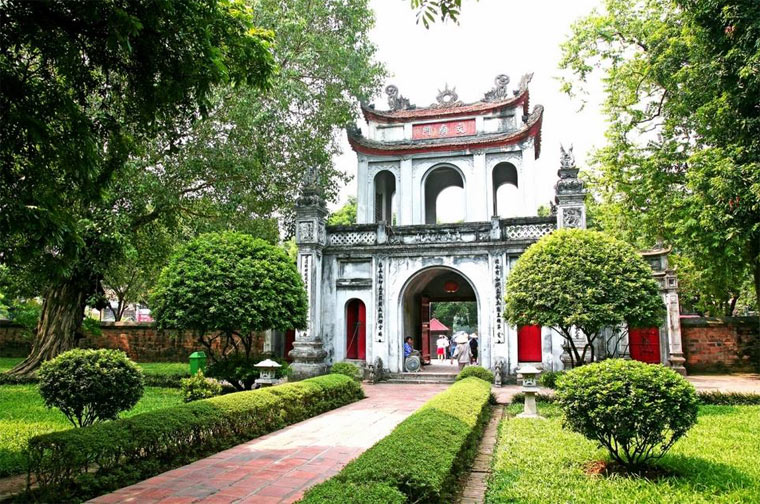 The historical and cultural significance of the Temple of Literature, also known as the Confucius Temple, make it a worthy starting point for exploring Hanoi. Now the Temple of Literature is a favorite meeting place for students facing exams: they ask the deities for patronage in their studies. For tourists, the place is interesting as a museum complex, embodying a long period of the domination of Confucianism in the culture and philosophy of Vietnam. The decoration of the altars is striking with elaborate reliefs of red and black lacquer. The gold and bronze elements of the decoration create an atmosphere of wisdom and tranquility. The territory of the temple is divided into several sectors. The central gate and pathway were made for the emperor, others were for officials and the military. Through one of the courtyards you can go to the ceremonial hall where Confucius sacrifices were performed. 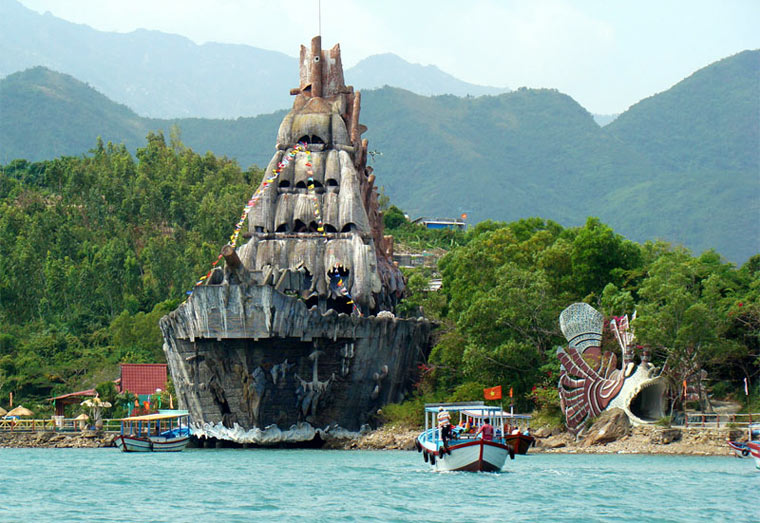 On a picturesque seashore not far from Nha Trang is the Chi-Nguyen Oceanarium, or as locals like to call it, Neptune’s Palace. The building looks mystical and resembles a ghost ship, rising from the depths, covered with coral and shells. The sea museum appeared due to the enormous work and love for wildlife of an ordinary Vietnamese fisherman Le Can. With his own earned money, he hired builders to build a dam, which separated the territory of the oceanarium from the sea. There are a total of three pools: the first where you can see sharks and other predatory fish, and the second and third – stingrays, turtles, shrimps and other amazing representatives of marine flora and fauna. If you want, you can feed the inhabitants of the water area with special food. This is one of the most interesting attractions in Vietnam to visit with children! 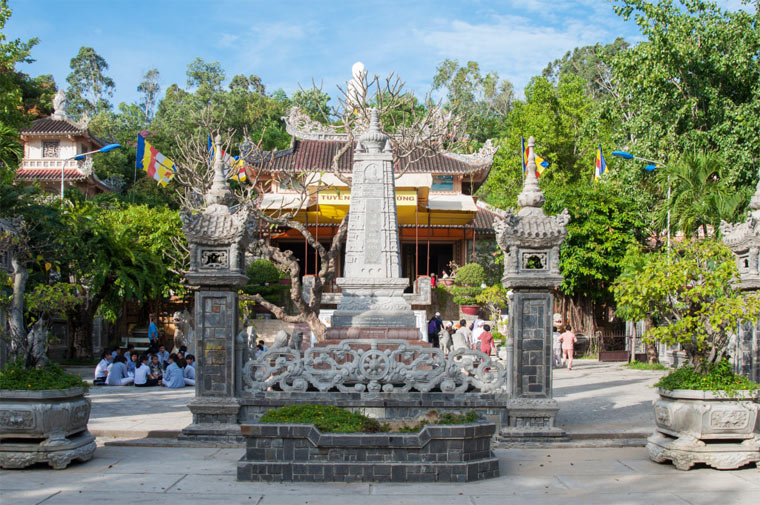 When traveling in Vietnam, it is also interesting to visit the Lon Son Temple in Nha Trang. It was built in the late 19th century on top of a hill, but was later moved to the foot of the hill because of the threat of collapse due to a violent landslide. Around the pagoda are figures of lions and dragons, as well as artificial ponds with live fish. Lon Son Pagoda became quite popular because of the 14-meter-high majestic statue of Buddha sitting in the lotus position, located at the top. It is accessed by a 144-step stone staircase, which is said to purify those who climb it from all sins. From the upper platforms offer breathtaking mountain scenery, buried in the jungle.

You can visit this attraction in Vietnam from 8 am to 8 pm. 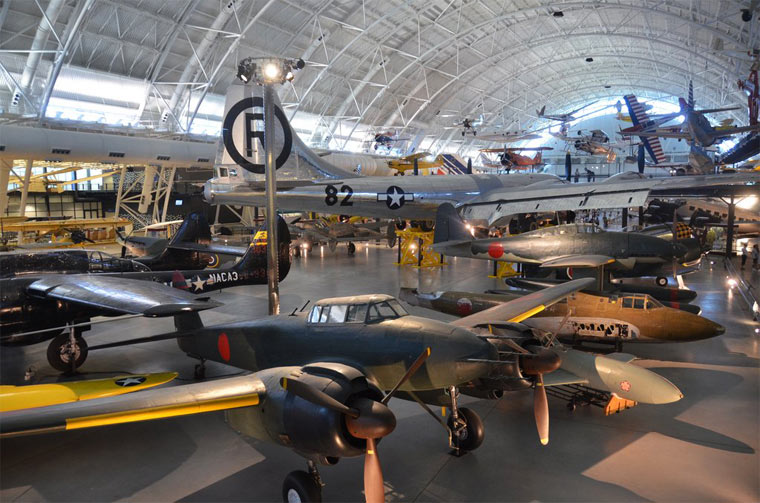 Military history buffs will be interested in visiting the Vietnam Museum of Military History in Hanoi, which has a large collection of machinery, guns, and vehicles. The museum opened in 1956 and coincided with the 15th anniversary of the Vietnam People’s Army. Numerous documents are collected here to help learn more about the conflicts in which the country took part. In the exhibition halls to the attention of visitors are presented real objects used in military operations. They are located both inside the building and outdoors. Tourists are especially interested in helicopters, planes, tanks and one of the main exhibits: the nearly destroyed Hellcat airplane that was shot down in 1954. 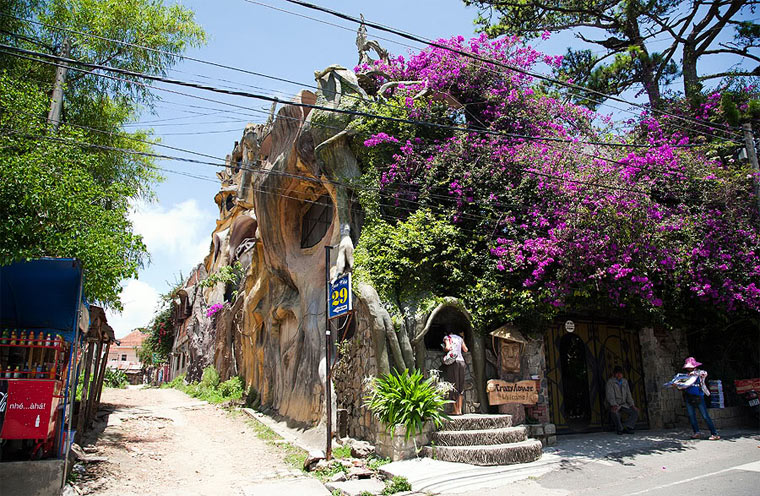 “Crazy House” in Dalat is among the most amazing and unusual attractions in Vietnam. This striking building of bizarre shapes and curved paths has appeared in numerous international architecture magazines and even made it into the top ten most creative buildings in the world. “Crazy House” was created by female architect Dang Viet Nga. Construction began back in 1990 and is still going on. Each room and structure in the house is unique and unrepeatable. The main purpose of the building is to bring people back to nature, which has largely been destroyed. Therefore, the building is something like a magic tree or a giant anthill with numerous pathways-trails. The history of its creation is also interesting. Originally it was conceived as a hotel for couples in love. On the verge of bankruptcy, Viet Nga decided to let visitors into the building for a small fee, now hustling crowds of tourists. 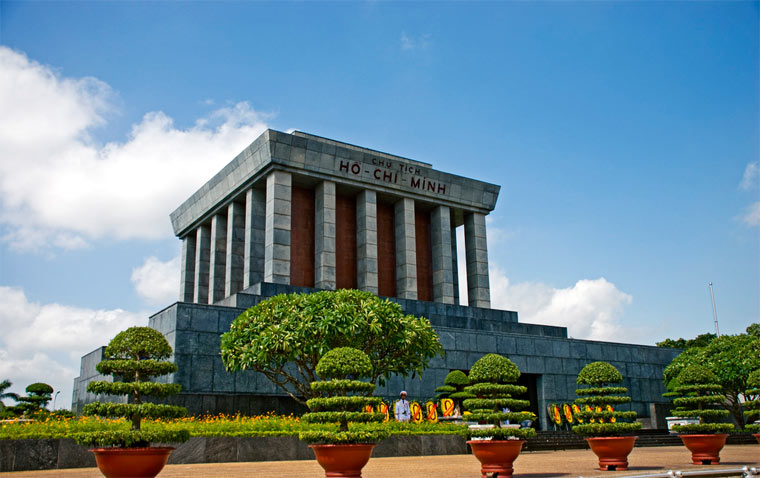 The tomb of the first president is the central part of the architectural ensemble, which also includes four other objects. The author of the design of the mausoleum was Harold Isakovich, who also worked on the draft of the Lenin Memorial. The construction was completed in just two years. Externally, the building looks like a large lotus. Inside the mausoleum anyone can get acquainted with the life and life of the president, but any photography is prohibited. On the second floor is the president’s coffin, made of transparent glass. The square in front of the memorial complex is planted with rare species of trees, which have been brought from the farthest provinces of the country as a gift from the people. 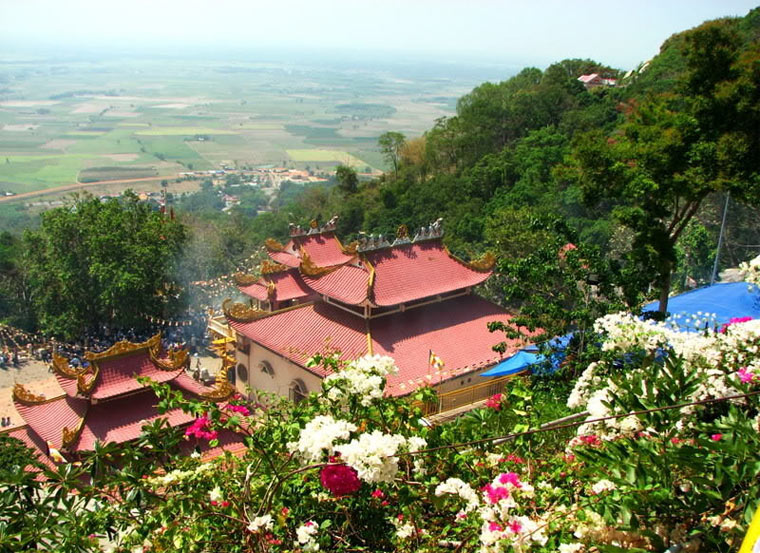 If you do not know what attractions in Vietnam are worth visiting, do not miss the mountain with the romantic name Black Lady, which is known not only for its fantastic scenery, but also for the impressive buildings on the green slopes. There is a large concentration of temples and pagodas, a visit to which will help reveal the amazing cultural richness of the country. As legend has it, the goddess Ba Den descended from heaven to the top of the mountain, hence the name. The beauty of nature with its endless valleys and wealth of wildlife is revealed even before arriving at the base of the mountain. The summit of the Black Lady can be conquered on foot along numerous trails or by cable car. You can descend the mountain on a special sled that flies at high speed along the toboggan.

12. the Cham towers of Po Nagar 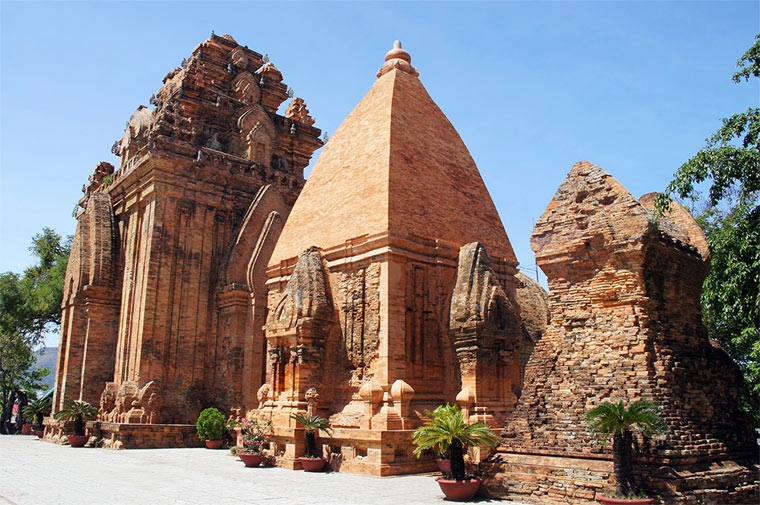 The Po Nagar Cham Towers round out our list of the best sights in Vietnam. It’s hard to believe that these towers are over a thousand years old, so well preserved are they. Po Nagar were once part of an entire temple complex built in the 7th-12th centuries by the Cham people. They were used for Hindu religious ceremonies. Only four towers have survived from ancient times, each of which still serves to venerate a particular deity. In the main tower is a huge statue of the mother goddess Po Nagar, who taught people about agriculture. The towers are considered a place of power: a two-day festival is held annually in March to watch the unusual and colorful Hindu rituals.