Verona: The city of romance and international exhibitions

Verona lies on the banks of the river Adige, in the north east of Italy. The city is famous for William Shakespeare’s immortal Romeo and Juliet. The action of the play takes place in Verona, so the city has become a mecca for all romantics, newlyweds and admirers of the great English playwright. Organizing a wedding here is a matter of honor for many, because where else but here, in the city of love, to celebrate your own wedding?

In addition, Verona is one of the major industrial centers, there are enterprises of woodworking, chemical, food, printing and light industry. Every year international exhibitions and agricultural fair are held here.

Since ancient times, the Adige River has attracted many different tribes and communities to its shores. It is said that the first settlement was formed here during the reign of Emperor Domitian. The city became a Roman colony in 89 BC. For a long time it was used as a defense against barbarians and was a kind of military base, well fortified. Emperor Gallien also helped to strengthen the city: at his order the city walls were finished in 265 A.D.

Verona, like other Italian cities, was not spared from the attacks of the ubiquitous Goths and Lombards. And also the transfer of power from hand to hand between the dynasties of wealthy Italian families. The first Romano dynasty was replaced by the Scaligers, followed by the Visconti family, from which power passed to the Carrara family. All this ended with the fact that the city fell under the guardianship of Venice, where was stably the next 400 years.

After Napoleon Verona belonged to the Austrians and remained in Austria until 1866. Then power fell into the hands of the Italian government. The city was badly damaged by bombing during World War II.

Now Verona is a tourist, industrial and the largest center of exhibition and wedding tourism in northern Italy.

An ancient amphitheater that has been preserved since A.D. 30. It is located in Piazza Bra . UNESCO has included it in the list of World Heritage Sites. Every year every summer there is an opera festival. The amphitheater was originally built by the Romans to hold 30,000 guests, but nowadays it only holds 15,000. This is done for security reasons, just in case. The acoustics here are simply superb, which is why the amphitheater has been used exclusively for its intended purpose since 1913.

The Arches of the Scaligers

The Scaliger dynasty ruled Verona during the Middle Ages. And the arches are their tombstones in the Gothic style. They are located near the church of Santa Maria Antica . They are decorated with relief images of angels and saints, as well as equestrian statues with sculptures of members of the family.

Or “Square of the herbs”, which is located on the site where the ancient Forum used to be. The center of the square is occupied by a fountain with an antique statue from 380 A.D. On the perimeter are the Baroque Maffei Palace, the Mercatorum House in Medieval Gothic style, the Mazzanti House with a frescoed facade and the Lamberti Tower, dated 1172.

The city is on the banks of the river Adige and of course as you walk around Verona you will come across bridges. One of the most famous is the arched Pietra Bridge . It was built during the reign of the Roman Empire in 89 B.C. This unique ancient construction was completely destroyed during the retreat of the German fascist troops. And what we have an opportunity to observe now is a reconstruction.

The historic square of the city, located in the very center. It used to be the seat of Verona’s administration and local government. In the square you can see the Podesta Palace, the Council Loggia and the Palace of Justice.

Of course, no Juliet never lived in this house, but since Shakespeare’s action took place exactly in Verona, the enterprising citizens of the city quickly “moved” the characters of the play in suitable for this house. “Juliet’s House” belonged to the Cappello family, and Juliet’s balcony was glued to the facade immediately after the release of the film of the same name by D. Cukor. And, of course, hung a plaque. So the house became a famous landmark of Verona.

Lovers of archeology will be interested in the Museo Lapidario Maffeiano, which is located at Piazza Bra, 28. In fact, it is a museum of tombstones that were found during excavations. According to its creator, the Marquis Scipione Maffei, the inscriptions on the tombstones are “talking antiquities” and more than any other “are able to tell scholars the knowledge they need to study the history of their people”.

A beautiful and very picturesque garden surrounding the mansion of the same name. The garden is adorned with lovely sculptures and planted with cypresses. These cypresses remember even Goethe, who walked among them, writing his poems, which later became famous. At least, so they say. Romantic mood is created by an original maze, where lovers can get lost and find each other for only 7 euros.

If you have decided to visit Verona on your own, the hotels section of our website is to help you. Here you will always find hotels with discounts for all tastes and wallets. Do not forget to look periodically in the section Our excursions . They are updated every season. We wish you a pleasant vacation! 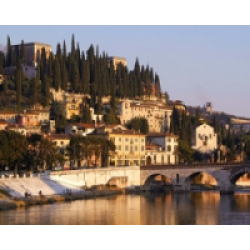 Verona was the final destination of our musical-romantic trip that my husband and I took last summer. It was the fulfillment of a long-time dream of mine to visit with my beloved in such important and interesting places for me. Starting the trip.

The City of Romeo and Juliet.

Let me tell you about another beautiful and noteworthy city in Italy – Verona. Personally, when I mention the city of Verona, I immediately think of Romeo and Juliet. After all, it was in Verona that, according to Shakespeare, all took place.

Home of Romeo and Juliet.

Traveling around Italy, of course, I could not miss the most romantic city, the birthplace of Romeo and Juliet, Verona. That’s what we will talk about today. Verona is a very ancient city, it was founded in the second century BC.

Verona is a city of lovers, romantic atmosphere at every step, beautiful architecture, positive atmosphere, and a magnificent city. It’s a beautiful city, the ice cream, the parks, the little houses, the streets.

Good evening my dear friends, today I will tell you about my visit to the city of Shakespeare, romantics, lovers – Verona! Before the visit a friend of mine said that the city is not interesting and gloomy, so I went with such a mood.

Amazing city! A symbol of love))

When we say “Verona” we immediately think of Romeo and Juliet, or just Juliet’s house. But the city is famous for more than just that. Just recently I told you about our vacation in Italy and.

A charming city where love lives!

It’s probably my favorite city in Italy, well, or one of my favorite cities)) What I like about European cities is the lack of problems with parking, and this is important for travelers in cars, which we are.

And there’s basically nothing to see.

I remember wanting to go to Verona so badly, to finally get involved in all things Romeo and Juliet, too. Such a book! So many amazing movies made about it! It’s all so romantic and beautiful. The whole thing has such a halo to it.

The beautiful and romantic city of love sung by Shakespeare.

Verona is a resort city located in the northeast of Italy, in the Veneto region, on the banks of the Adige River. Verona is a romantic city praised in its works by Shakespeare, Byron, Goethe. It is not known exactly when this city was formed.

The Venetians and Vendetta.

A beautiful city on the Adige River, in the center there are many compactly arranged attractions (and even two “Colosseum” of its own)

Verona’s calling card – St. Peter’s Hill; Why did we like Verona? There are probably several reasons. Time of visit – first half of January, not many tourists, and the streets, stores and temples are still full of Christmas paraphernalia.

The perfect city for romantics and shopaholics

It so happened that I was in Verona few years after Paris (I even crossed this city off my list of places I will visit again or recommend to others). Verona – a typical European city with ancient architecture, moderately urbanized.

VERONA – the city of monuments and lovers.

By the light hand of Shakespeare there is a rather one-sided view of Verona – exclusively as the city of Romeo and Juliet. And yet in Verona there are enough other values. Let’s start with them. Unfortunately, it’s a complete list.

A city for romantics, not because of Shakespeare

Verona has a status of almost the most romantic city in Italy. Certainly because of Shakespeare and his most famous work. In my subjective opinion, Shakespeare is the last thing you should come here for. Frankly, Verona was.

The city where the legend of Romeo and Juliet lives

Verona- everyone knows this city as the legend of the love of two young people who fell in love despite their families’ feud!!! I’m not going to tell you about the legend here – everything has already been written a thousand times and.

Verona – the tale of Romeo and Juliet

When traveling in Italy, be sure to visit Verona, the legendary city of Romeo and Juliet! There’s no sea there, but it’s a real Shakespearian city. Fascinating architecture, narrow streets, quiet and measured pace. And of course, the crowds of tourists. The most.

Despite the overcast weather, we liked it better in Verona than in Venice. Although it may be due to the fact that we were lucky with the guide. It was interesting; And this is their coliseum, now here is the stage. Of course it is not.

It’s a marvelous city. You know, I’m running out of adjectives to describe the places I’ve been. That’s how lucky I am in life to have traveled to Europe) I am sharing with you. So. Verona is a much more beautiful city than Turin and.

The magnificent Verona – all soaked in romance and history.

Italy is my favorite country to visit. I go there every year and I am charged with positive emotions for several months. Each time I try to visit a different city. The last time I was there at the very beginning.

It was a dream come true!

When I was asked where to go – Venice or Verona, the distance is about the same from where we are. Without even thinking for a second I said Verona! Of course, it’s all about Romeo and Juliet) Once upon a time in.