Jerusalem is the historic heart of Christianity, Islam and many other religions, but the city will be interesting to visit not only to pilgrims, but also to ordinary tourists. There is something to see, taste and, of course, what to bring the family as a gift. 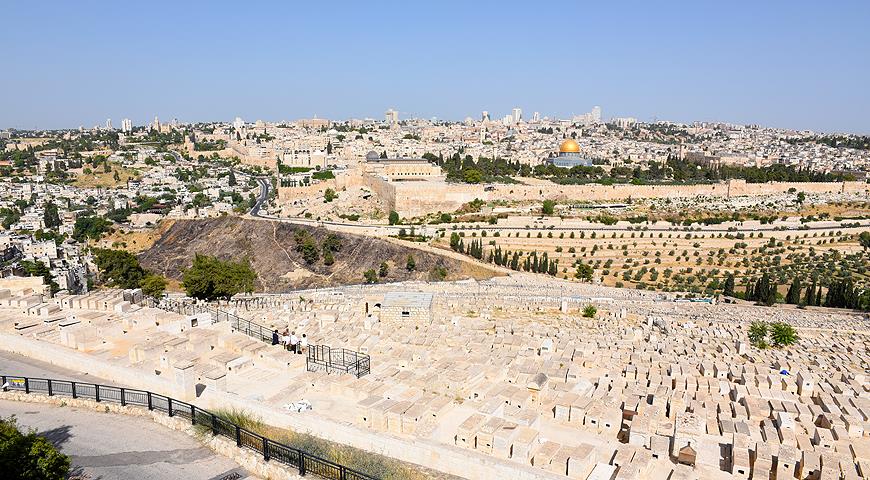 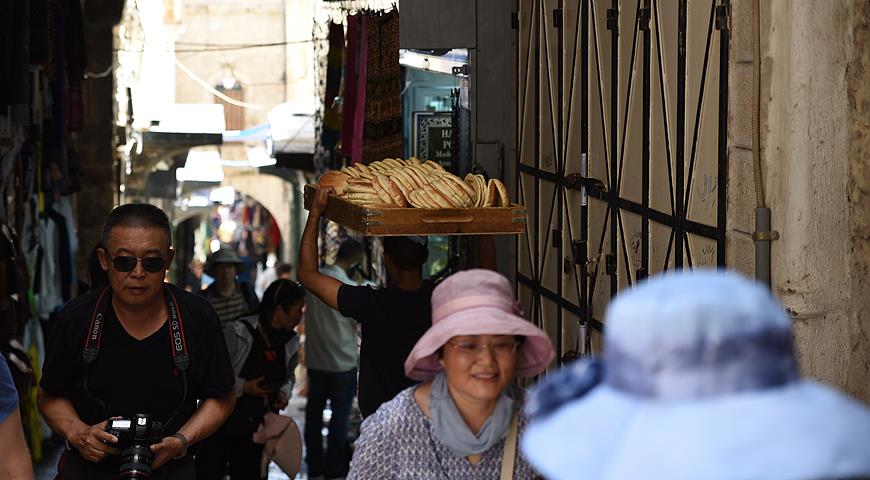 Jerusalem and its history as old as the Bible itself.

Jerusalem holy sites: where all pilgrims tend to go, but will be interesting to atheist tourist as well.

As a matter of fact, Jerusalem became the capital of Israel more recently (in 1949), although the history of this ancient city for thousands of years.

It is known that Jerusalem was captured, destroyed and rebuilt many times. For example, in the 70s A.D., during the suppression of the great Jewish uprising against the Romans, Jerusalem was completely turned into ruins. In 132-135 A.D. the place itself was renamed. And only in 325 AD, the Roman Emperor Constantine I returned to the city the name Jerusalem and ordered the construction of Christian holy places in the city, including the Church of the Holy Sepulcher (in 335).

Scholars believe that the most famous street of the holy city Via Dolorosa is nothing more than an attempt by medieval monks to revive the Bible. But people do not come here for the historical truth. Although Jesus Christ did not walk the modern Via Dolorosa, Jerusalem is in any case a treasure trove of cultural and historical information.

Jerusalem is called the city of three religions: Islam, Christianity and Judaism, because in one city there are sacred relics of three very different faiths. The holy place common to all three religions is the Temple Mount.

We suggest that you also take a short video walk through the center of Jerusalem.

The Old City and the Way of the Cross

Historically since the beginning of the nineteenth century, the Old City has been divided into four quarters: Christian, Muslim, Jewish and Armenian.

In the Christian quarter is the main temple, the Church of the Holy Sepulcher. Here ends the Way of the Cross or Road of Sorrow (Via Dolorosa), which follows Christ’s execution on Golgotha.

On the Via Dolorosa it is customary to make nine of the fourteen stops, plus another five on the grounds of the Church of the Holy Sepulchre: 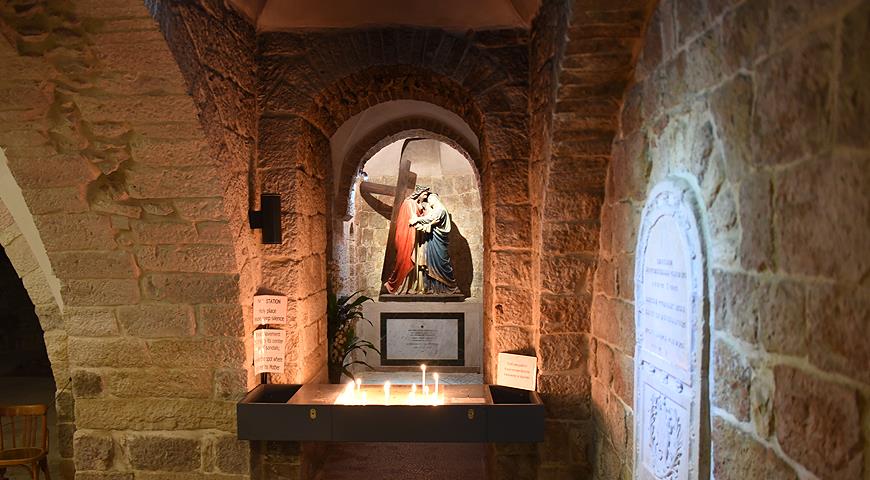 The fourth stop of Christ: the encounter with the Mother 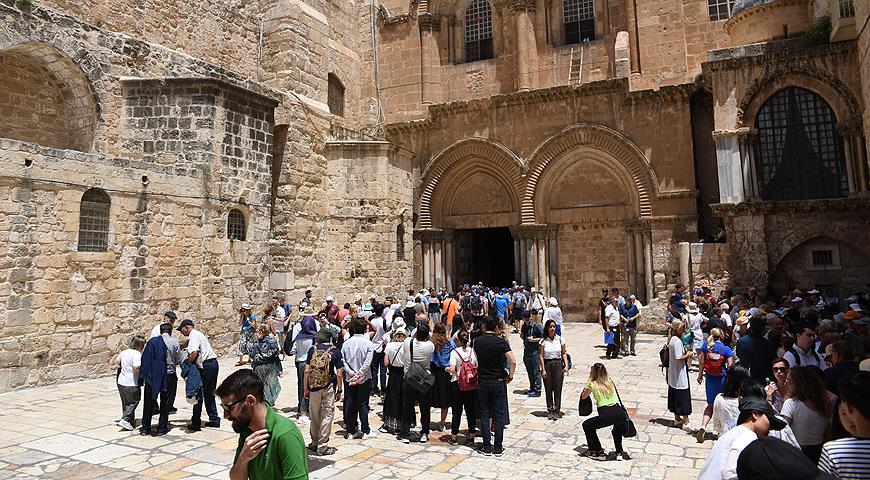 The square in front of the Church of the Holy Sepulchre 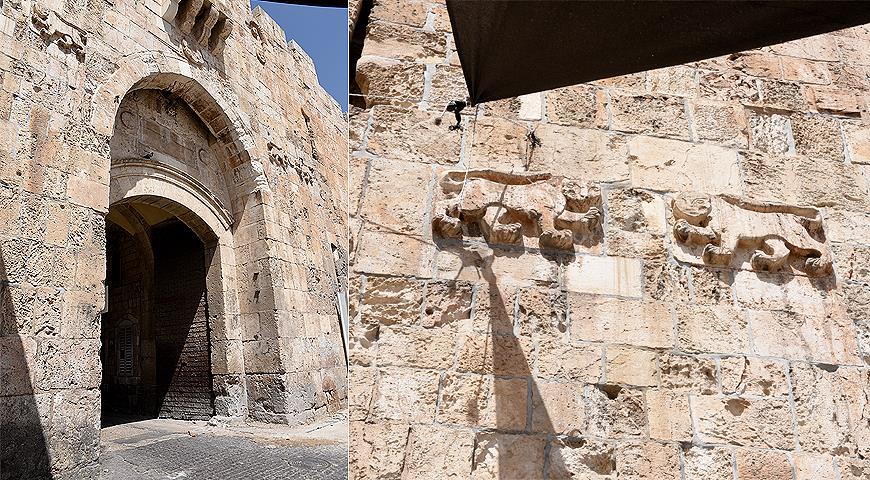 The beginning of the Way of Sorrow is the Gate of the Virgin Mary, or the Lion’s Gate. Through it Jesus entered the city on Palm Sunday. Here began his journey to God’s Glory through suffering. 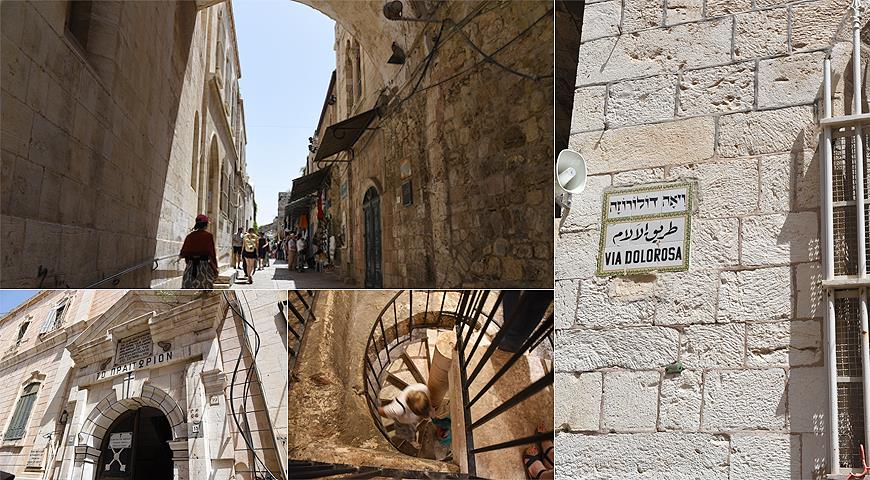 Keep in mind: most of the “way” along the Via Dolorosa goes through the Arab quarter, which means that the road essentially goes through the marketplace. And for the merchants, every passerby is a potential customer. If possible, walk the way of Christ in the morning hours, then your path will be calmer and more peaceful.

The Church of the Holy Sepulchre

The temple was built in 335 and is located on the site of the crucifixion, burial and resurrection of Jesus Christ. It is the center of Christian pilgrimage. There are also such shrines as the Stone of the Anointing, the Holy Sepulcher and Golgotha.

The temple belongs to six hundred! (Greek Orthodox, Catholic, Armenian, Coptic, Syriac and Ethiopian) confessions. The time of services is strictly divided by days, hours and even minutes. Such a division has been the cause of conflicts, and that is why, to ease the “tension” between denominations, the keys to the temple have been kept in the Arab-Muslim family of Jude since 638. The right to unlock and lock the door belongs to another Muslim family, the Nusseiba. For centuries these rights have been handed down in both families from father to son. These families are highly respected and are known far beyond the borders of Israel. 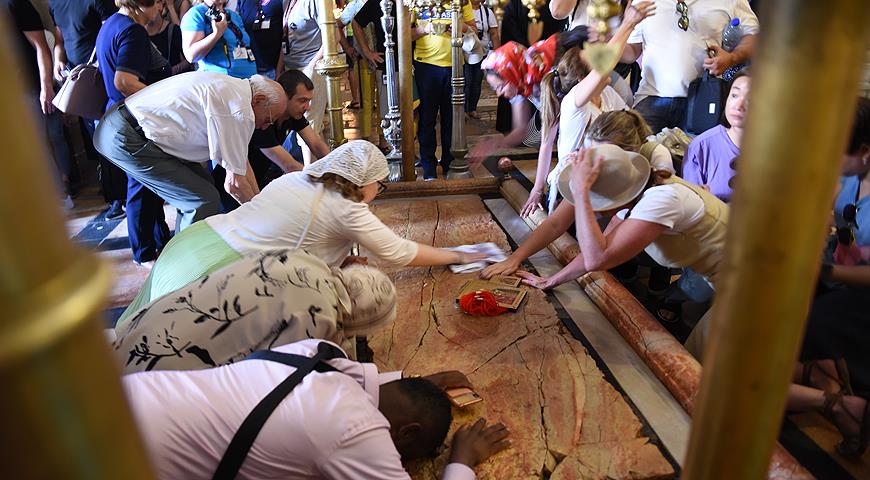 One of the main holy monuments in the Jewish Quarter is the Wailing Wall, part of the stone wall around the Temple Mount in the Old City. There is always a great commotion around the Wailing Wall as millions of tourists make their way to Jerusalem to pray and to leave a note of petition to the Most High between the stones.

The ruins of the Herodian city that are also located there invariably draw the attention of tourists and pilgrims. 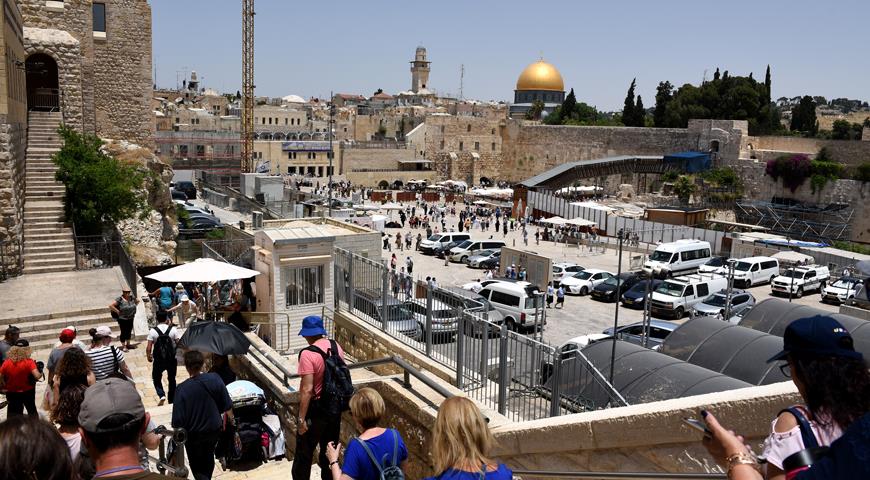 The Way to the Wailing Wall 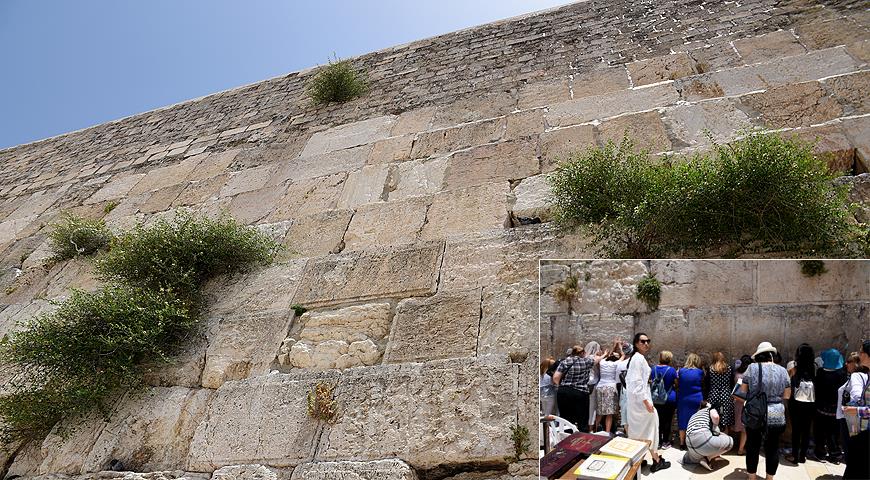 The women’s and the men’s areas are separated: the men approach the Wailing Wall from the left and the women from the right.

Church of the Burial of the Virgin Mary

While in Jerusalem, plan to visit the underground Church of the Virgin Mary in Gethsemane. The temple is simultaneously owned by the Greek Orthodox Patriarchate of Jerusalem and the Armenian Church. According to sacred texts, the burial of the Virgin Mary took place here and an unusual underground church, the Church of the Assumption of the Blessed Virgin Mary, was built over her tomb. The church is considered Greek Orthodox, but other Christian denominations have access to the church for services. 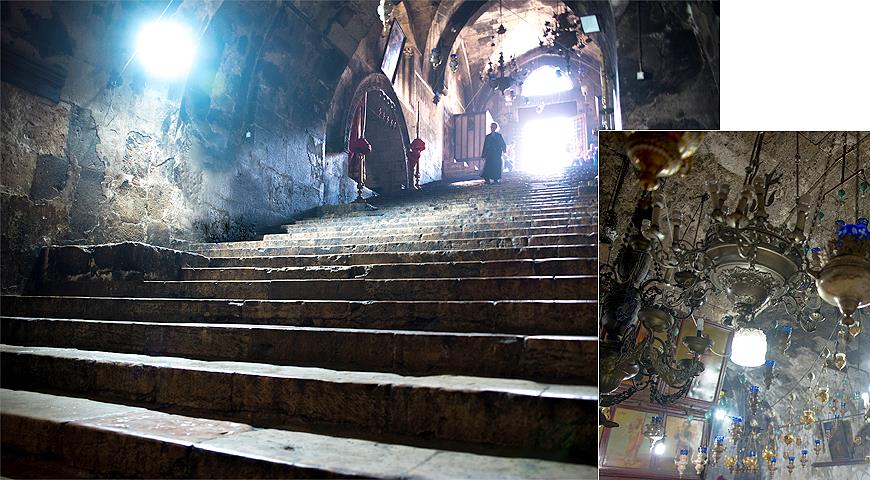 The temple of the Virgin Mary is underground. It is entered from the south and a wide stone staircase of 48 steps leads down from the entrance. From the ceiling hangs hundreds of lamps of fine handmade work.

Pilgrims and tourists travel to Jerusalem from all over the world: the largest number of tourists to Israel comes from the USA, with Russia in second place. Modern Jerusalem has grown far beyond the borders of the Old City. The New City has many hotels for every taste, large shopping malls and authentic restaurants. 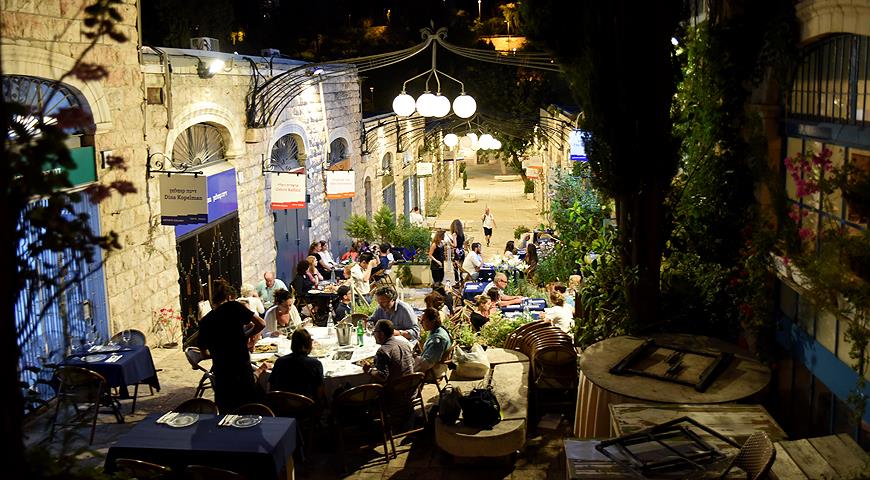 Eucalyptus (near the old town, 14 Khativat Yerushalayim), where the charismatic chef Moshe Basson cooks. He turns even an ordinary serving of food into a fascinating show! The cuisine is mostly traditional Israeli, there is a specialized menu for vegans and kosher dishes. The chef enjoys chatting with visitors, going from table to table and talking about the peculiarities of Israeli cuisine.

What to bring from Jerusalem

So it is customary to call a bundle of 33 candles – the number of years of the earthly life of Jesus Christ. It should be bought in advance before visiting the Temple of the Holy Sepulchre. Candles should be lit from the Holy Fire and extinguished there. After this you can present a bunch of candles (only the whole, not dividing) to their loved ones, and they will always burn only with the Holy Fire.

Charm, which has become popular quite recently, however, has already acquired many fans. Do not buy it from street vendors, of whom there are many on the way to the Wailing Wall. They take them on the spot and only in exchange for donations.

Sesame paste or tahini is considered an indispensable component of oriental cuisine. You can buy it all over the city in regular stores. But trust me, you won’t regret the time spent if you find the old tahini factory on a street near the Via Dolorosa, in the Old Town. 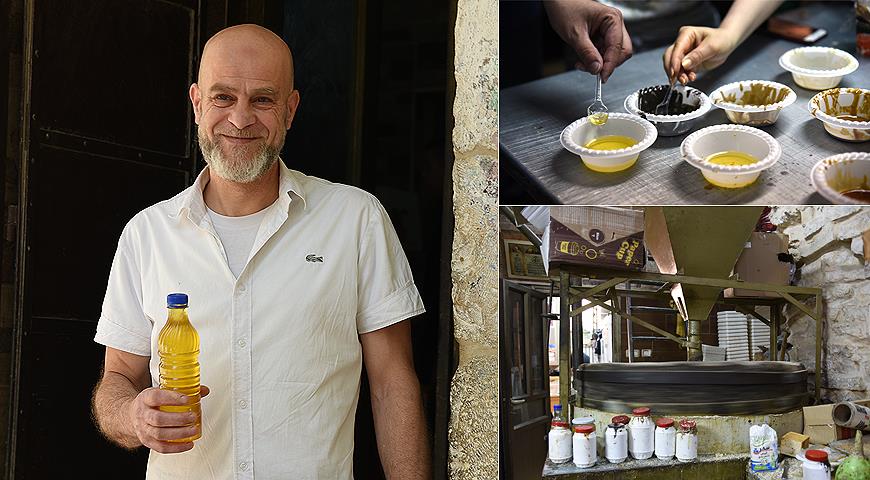 The tahini factory and Itzcah, its owner

The Al Jabrini family has owned the factory for more than 150 years. Only traditional methods are used in the production: sesame seeds are ground on old basalt millstones. Itzkah is proud of his production. “The modern one,” he says, “uses millstones made of a different stone, which rubs off quickly. Particles of the stone get into the tahini, and the heavier stone settles the pulp of the sesame paste.” That’s why his tahini, he claims, unlike that produced in modern factories, never stratifies. His products keep for more than a year without refrigeration. The only secret is not to let anything foreign get into it, even a drop of water could ruin it.

You can dip pieces of meat, fresh vegetables or bread into the tahini sauce. Without tahini, you can’t have full-fledged hummus.

The classic white tahini is made from peeled sesame seeds.

Beige tahina is made from unpeeled sesame.

Red congee is rare and difficult to buy. Sesame seeds are kept in oven for at least 10 hours.

Black sheep’s not made from sesame, but from the katsa plant (Arabic for “seeds of blessing”). Muslims eat it by the spoonful a day, exclusively for religious purposes.

READ
What to see in Loire, France

You can also buy sesame halva and grape honey (juice that is boiled down for 10 hours to a honey-like consistency) at the factory.

A delicacy that will suit the taste of both children and adults. Besides, sesame seed sesame sticks are considered one of the most useful, thanks to the rich composition of minerals and biologically useful substances. 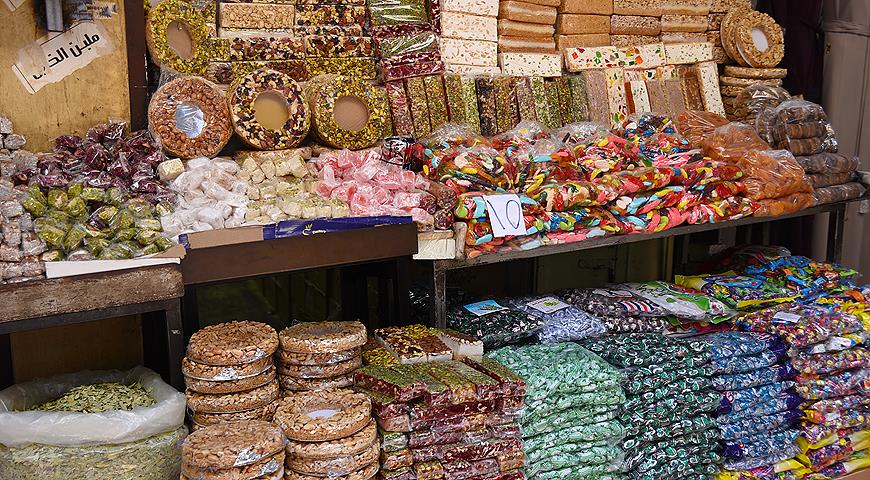 Market in the Old City in Jerusalem

Sesame oil is good for frying, it can be heated up to 400 degrees and stored for up to 5 years.

Israeli halva milder in taste than the Russian. It is cooked in olive oil. The choice is huge: halva without sugar, with nuts, vanilla, cocoa, etc.

In Israel, as throughout the Mediterranean, the use of spices is very active. Most often you will hear about adding hyssop to a dish. Don’t be surprised, this is not our traditional hyssop, which grows in many people’s dachas. This is oregano Syrian (Origanum siriacum, Origanum Maru ), sometimes (erroneously) it continues to be called Syrian Majorana syriaca, and the name Za’atar is also used. 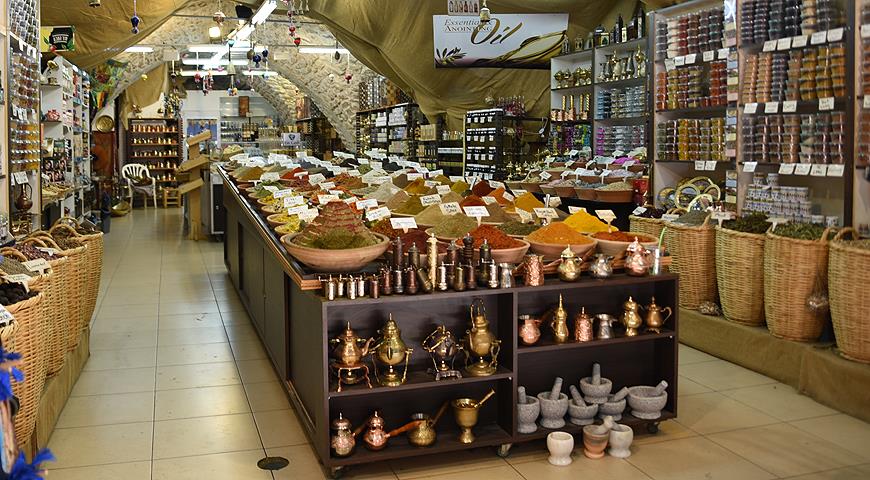 A spice store in Old Jerusalem 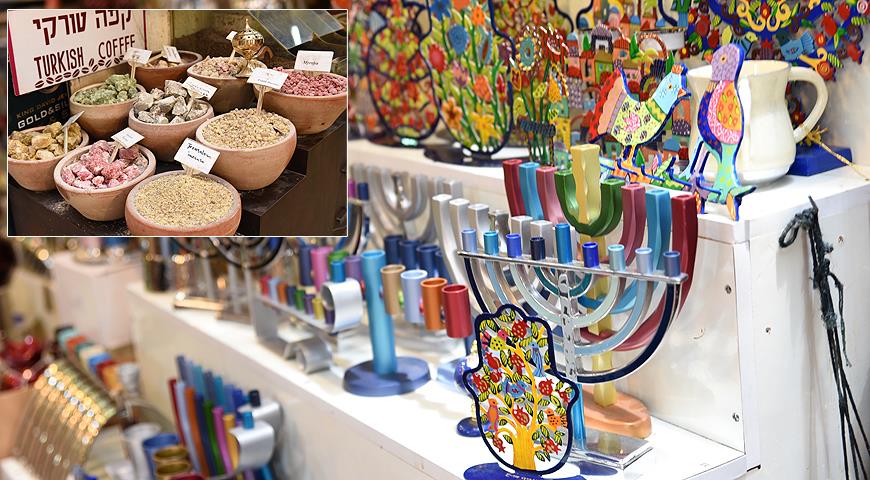 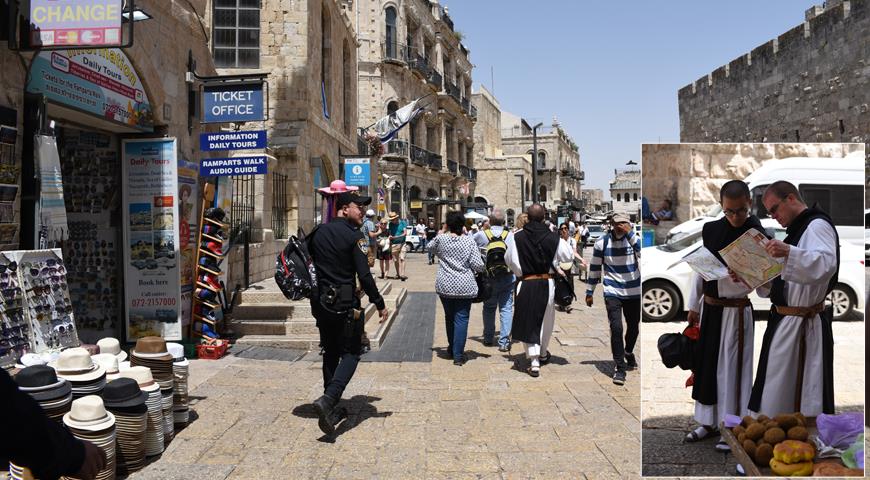 Thank you to the Israel Ministry of Tourism for organizing the trip and to our guide Seva Brayilova.