If you start a conversation with a Pole about the Baltic Sea, you will certainly hear about Ustka. For many Polish families Ustka is a traditional family vacation spot. And indeed, Ustka is a charming seaside resort. Clean beaches, beautiful promenade, but that is not all. If you want to know more, we invite you to take a trip! Let’s go.

The history of Ustka. From a fishing village to tourist resort

Ustka was for many years a forgotten fishing area. But in 1878, when a railway line was laid here, the town began to develop. Since then, more and more tourists are discovering the benefits of the town. At the beginning of the 20th century, before the First World War, Ustka was known as an excellent resort – respiratory diseases, cardiovascular system or nervous diseases were treated here, among others. There was even created a treatment center, which offered the possibility to use salt and peloid baths and inhalations. In 1922 the town was officially called Bałtyckie Uzdrowisko Ustka – that’s when many guest houses, villas and restaurants were built. The town has kept its spa traditions to this day, trying to justify the status of an important health center in Poland. Ustka received the rights of a town in the mid-1930s.

During World War II, Adolf Hitler wanted to turn Ustka into a military fortress and the most modern port of the Third Reich. However, the project was not realized. But some Nazi buildings have survived to this day, including the bunkers Blucher (now an interactive museum) or a fragment of unfinished breakwater (the so-called third pier), which was to enter the sea at a height of almost 1700 meters, but was never completed.Ustka. Beaches and walks

Ustka beaches are some of the most beautiful on the Polish coast. The eastern beach (Plaża Wschodnia) is especially loved by tourists. It is wide, sandy and surrounded by a pine forest. Since 2011, it is also regularly awarded the Blue Flag certificate, awarded to beaches and bathing places that meet the highest standards of cleanliness and safety. This beach also has a gently sloping entrance to the water, making it safe for children.

READ
Guide to Spoleto, Italy: discovering the beauties of Umbria

Along the coast runs the Promenade for walking (opened in 1875), sometimes called the Seaside Walking Park. Here from morning till evening there is a lot of life on the waterfront – a lot of restaurants, hotels, fish bars and souvenir shops. Apparently, Otto von Bismarck himself, resting in Ustka, sat at one of the tables on the waterfront.

West Ustka beach (Plaża Zachodnia Ustki ) is not so popular with tourists. There isn’t an abundance of restaurants, hustle and bustle. Although this part of the coast is wide and sandy, be prepared for a steep entrance to the sea. From the East Beach to the West Beach, you can get there by a revolving pedestrian bridge over the harbor canal. The total length of beaches within the administrative boundaries of Ustka is four kilometers. 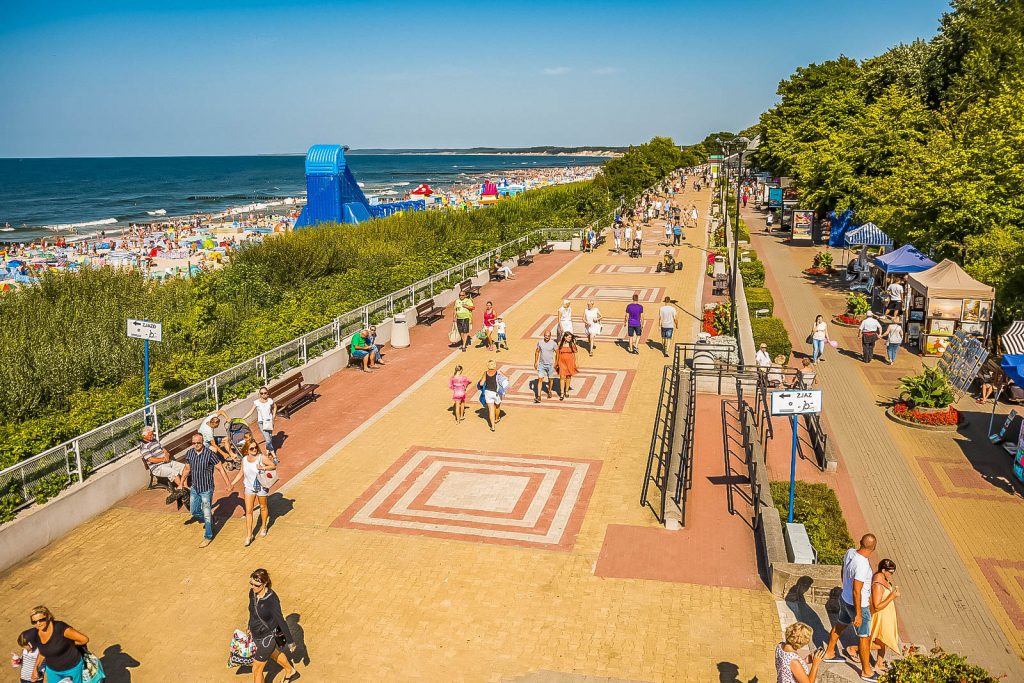 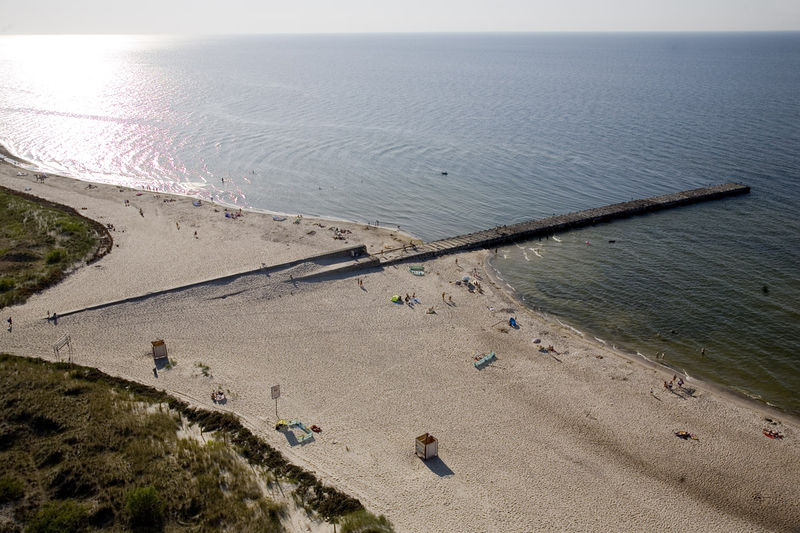 Port morski Ustka . It is the most open spot in the city. In the Middle Ages the port was the heart of the former fishing village – the area around it was built up from the middle of the 14th century. The red brick building (on today’s Zaruskiego Street) deserves special attention. 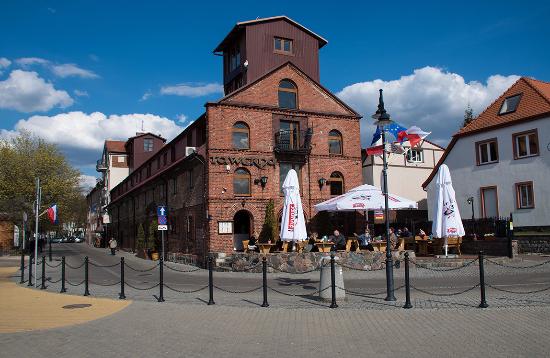 It is one of the oldest granaries of the port – here was stored grain, which was transported by ships, for example. to Scandinavian and English countries. The Art Nouveau building with turrets (at the turn of the 19th and 20th centuries) is also interesting – today the customs office is located here.

Lighthouse. This is one of the most famous sights of the city. The characteristic building made of red brick is more than 20 meters high. It is worth climbing up to the observation deck of the lighthouse and admire the stunning views of Ustka and most of the coast. 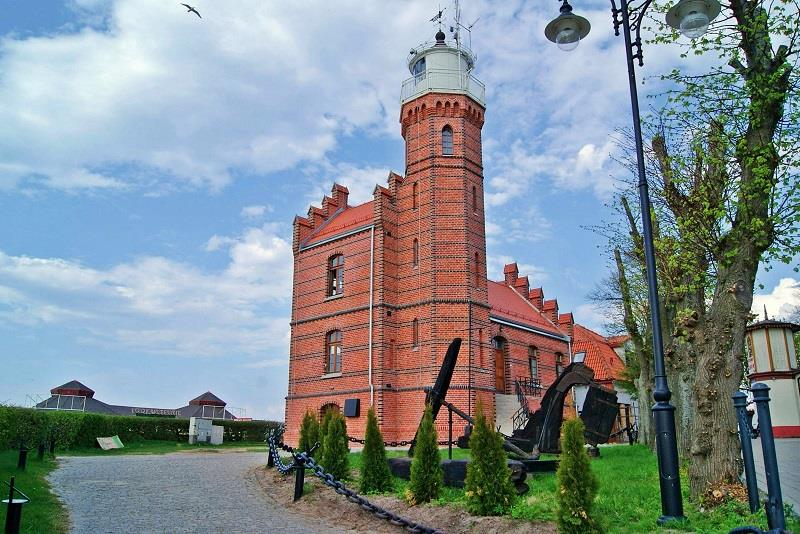 Syrenka Ustecka . It is a peculiar monument located right at the entrance to the port, near the lighthouse. Mermaid looking at the sea is often photographed in the city and very often appears on postcards from this place. “Domki w kratę” . Traces of the former Ustka can be seen in restored fishermen’s houses and apartment buildings at the turn of the 19th and 20th centuries. Nowadays, white houses in black checks are a characteristic feature of the city center. Those who especially like it should go to Swołowo (19 km from Ustka). There are almost 100 original, reconstructed buildings, almost 150 years old. Ławeczka Ireny Kwiatkowskiej . It is an interesting monument, located on the promenade in the spa park. The bench is a kind of tribute to the famous actress, who often spent her vacations in Ustka. 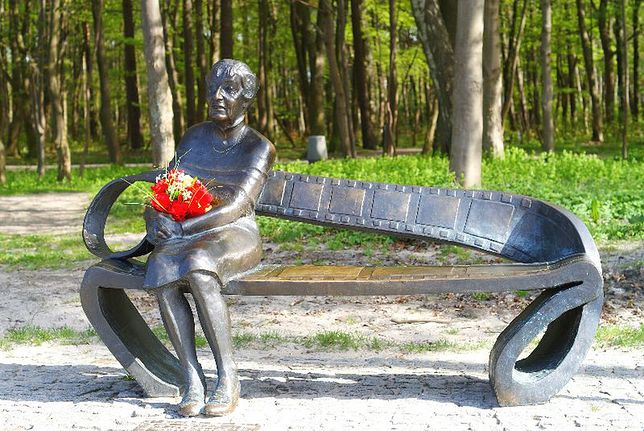 Museum of Bread . In the attic of the old bakery a unique cultural object was created, where you can admire the equipment of the 17th century bakery – bakeries, mixers and waffle makers of the early 20th century. Kościół Najświętszego Zbawiciela w Ustce . This neo-Gothic building was built in 1885 on an empty dune behind the village (today it rises almost in the center of town). It was consecrated as a Protestant church, but after the end of World War II it belongs to the Catholic Church. Blücher Bunkers . These are the remains of German bunkers from World War II (located on the western breakwater of the port). Inside, there is an interactive museum where you can see pictures, films and listen to recordings from the beginning of the war. Ustka Weather. When is it worth going?

Rest on the Polish coast is worth planning from June to September. During this period it may be as much as 30 degrees Celsius – a strong wind from the sea brings a little coolness. During the warmest months of the year the water in the Baltic Sea warms up to 16-17 ° C. In the high season, Ustka, in addition to sunbathers, is also visited by windsurfers and kite surfers – the local beaches are very good conditions for these water sports.

Also Ustka is a good place for autumn and even winter weekend excursions – not only because of the high iodine content in the air, but also because of the much smaller number of tourists.