Experience the true taste and flavor of authentic Asian cuisine. Do you know what kind of rice is popular in China, Japan or Thailand? Interesting facts about history, traditions and customs, as well as detailed recipes and secrets of cooking authentic Asian dishes. 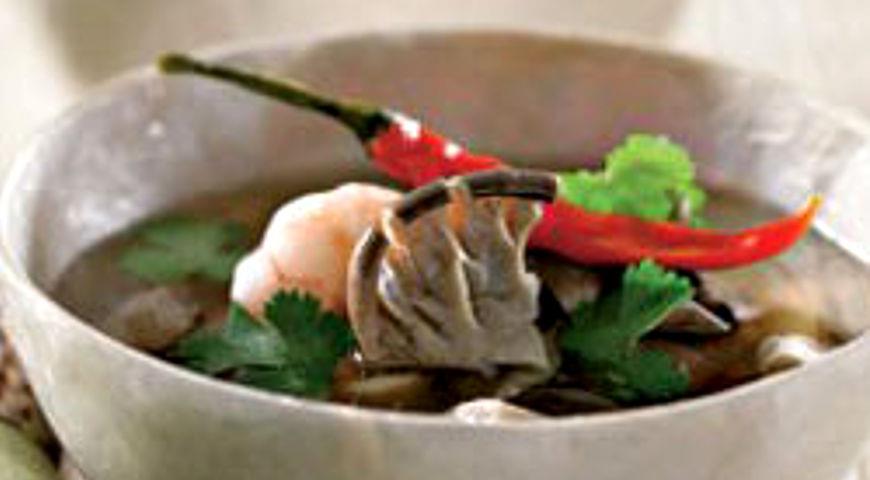 Rice is perhaps the main product of Asian cuisine. In Japan, they use round rice for sushi, which becomes sticky during cooking. A popular product in Thai cuisine is long-grain sticky flavored jasmine rice, also known as Thai frangrant. It is used in Thai desserts and cooked over low heat in coconut milk. Red rice is also known in Thailand. In India, long-grain rice is preferred – basmati, indica. 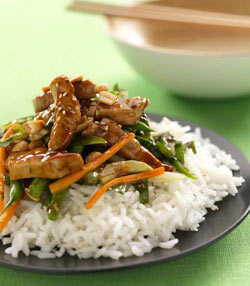 Noodles of different shapes made of flour and different cereals (and not only cereals) are very popular in all Asian countries. One of the most famous is egg noodles made of wheat flour and eggs. Egg noodles are thin and transparent and are made from golden beans. It goes best with salads, soups and pan-fried dishes. Rice noodles are made from rice flour. They are often baked or served with vegetables, chicken or shrimp.

In Japan, there are two traditional types of noodles, soba and udon . Soba is a thin noodle made from buckwheat, which in turn is divided into four colors depending on the time of year. The most common color of soba is brown, the color of autumn. The other colors are the green of spring, the red of summer and the white of winter. Udon noodles are made from wheat. Wheat noodles are thicker and lighter in color. Both soba and udon are served cold or hot with soy sauce or dashi sauce. A third popular type of noodle in Japan is ramen or Chinese wheat noodles, which are served with meat or in a spicy broth.

Fish sauce is the most important component of Asian cuisine especially in Thailand. Fish sauce is made from the liquid enzyme of fish and is used as a salt substitute. In many ways it is similar to soy.

Curry paste is used in dishes of many Eastern countries. The intensity of curry paste depends on the fresh ingredients: large amounts of chilies, galangal, lemongrass, garlic, herbs and spices. The most commonly used are green, red and yellow curry paste. Thai curry paste is lighter and fresher in flavor than Indian paste. Its flavor unfolds during a long boiling process. 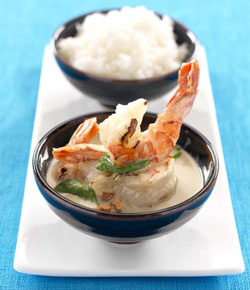 Chili is a condiment used universally in Asian countries. Fresh chili peppers have a greenish color, mature chili peppers change both color and shape. However, chili peppers are always hot, both fresh and dried. The smaller the chili pepper, the hotter it is. The spiciness is given by a substance called capsacin. Chili can be added to dishes fresh, dried, or as chili oil in various sauces or condiments. Its intensity can be softened with coconut milk or coconut cream, for example.

Cumin or zira are the most important spices in Indian cuisine. Cumin seeds are used both ground and whole in meat, fish, shrimp, and vegetable dishes.

Galangal is a root, a type of ginger, which has a milder flavor and richer aroma. It is commonly used in Thai cooking, including purees and sauces.

Ginger is native to Asia. Ginger has a sweet and spicy taste. Ginger root is used both fresh and dried. Ginger is also used to make a sauce. Ginger can be used as a seasoning for pork, chicken, shellfish, and fish, as well as in fruit desserts. In Japan, strips of ginger are marinated in sweet rice broth seasoned with vinegar. Pickled ginger (gari) is served with sushi to “free up” the taste buds between different types of sushi. 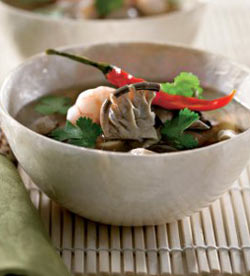 Cilantro is an herb that is used in every corner of Asia. In Thailand, the fresh leaves and stems of aromatic cilantro are used to garnish dishes, while the roots are used for broths and various sauces. Cilantro roots have a strong flavor. They can be added to dishes either ground or whole. In Indian cuisine, ground coriander seeds are often used, for example, in curry sauce. Cilantro pastes are also made.

Bamboo shoots are saplings of young bamboo cut into strips. They are an important ingredient in Asian cooking. Canned bamboo shoots are available. Crispy and soft – they are perfect with salads, soups, vegetable dishes cooked in a wok, or as a side dish to a main course.

Brown cane sugar has an exotic flavor and aroma of caramel. It is used as a seasoning that gives pungency to spicy chili and a flavor finish to curries and pan-fried dishes. Cane sugar is added to baked goods and beverages.

Wasabi is one of the most important seasonings in Japanese cuisine. It is served with sashimi, sushi, fish and meat dishes. Wasabi is sometimes called Japanese horseradish because it has a very strong and spicy taste. Wasabi is sold in powder, sauce, and paste form.

Garam masala is one of the most popular spices in Indian cuisine. Literally, the name translates to “spicy spice mixture,” but the taste can range from mild to very spicy. The main ingredients of garam masala are cardamom, cinnamon, and cloves.

Chutney is an Indian sweet and sour condiment made from vegetables and fruits. The fruit is cooked in sugar and vinegar until it becomes a jelly-like mixture, flavored with, for example, garlic, ginger and chilies. Chutneys are used as a garnish in curry dishes and as a seasoning for meat, fish and game. The most common Indian chutneys are sweet pickled chutneys. They are ideal with grilled meats, especially when combined with fermented foods. 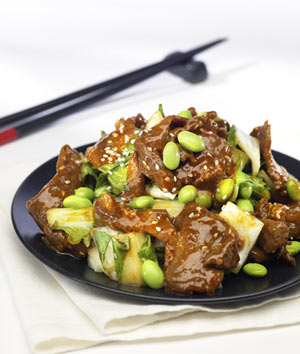 Miso is a Japanese product made from soybeans and salt and a fermented mixture of wheat, rice, and barley beans. As a rule, miso is a dark paste whose taste, color, and consistency depend on its ingredients and method of preparation. The most famous miso dish is miso soup, but miso is also used alone as a condiment or as an ingredient in sauces and marinades.

Rice vinegar is made from bitter rice wine. It is a flavoring agent for sushi rice. It is a mild vinegar, making it an ideal dressing for salads, marinades and soups.

Myrin is a sweet rice wine in syrup form. Myrin gives food a mildly sweet flavor. It is used in broths and teriyaki sauce.

Seaweed is used in Japanese and Chinese cuisine. Algae contain minerals and vitamins but are low in calories. Even a small amount of seaweed adds rich flavor to soups, stews, salads and pan-fried dishes.

Nori is the most popular red seaweed in Japan. Their thin, dried leaves are often used for sushi. Nori flakes are also available to sprinkle on salads and wok dishes. Nori reveals its full flavor when fried on a dry hot pan.

Arame are black strips of seaweed with a mild flavor. Arame is soaked in water for 10-15 minutes before cooking or marinated. They are ideal for salads and soups.

Kombu and wakame algae are also common in Japan.

Dark oyster sauce enhances the original flavor of food. It is used as a condiment on vegetables, beef, chicken, and dishes cooked in a wok.

Soy sauce is one of the staples in Asian cooking. It replaces salt, adding umami flavor to a dish (the Japanese consider monosodium glutamate the “fifth flavor”), and also gives a beautiful dark hue. Japanese soy sauce, which is made without the use of wheat, tastes richer than Chinese soy sauce. Light soy sauce is considered particularly flavorful. Soy sauce goes well with various marinades, cream sauces, soups and stews. Keep in mind that soy sauce contains 20% salt. 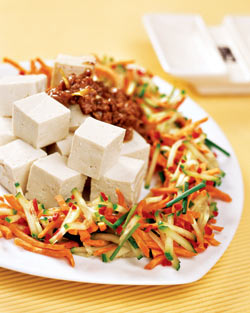 Soy curd or tofu cheese is widely used in Asian cooking. It goes equally well with salty main dishes, sour side dishes, and sweet desserts. Tofu is neutral in taste, but it takes on the taste of the other ingredients in the dish well.

Naan is a traditional Indian bread, dough for which is kneaded from milk, yogurt, and wheat flour. The bread is baked in a tandoori oven. Ideal with Indian cuisine. Always serve naan bread warm: spread a warm piece of butter on the bread and warm it in the oven for a few minutes.

The birthplace of tea is China. The tradition of drinking this hot beverage has spread to other Asian countries. Green tea leads the way in the East; in northern China, tea with jasmine is popular. In Chinese and Japanese culture, the tea ceremony is considered one of the most important meditative rituals.

One of the most important tea producers is India. Indians drink tea at least four times a day. Tea is served with snacks and is flavored with lemongrass, cardamom, mint, cinnamon, and milk. Latte tea consists of strong black tea, milk, sugar, and a few spices.

In addition to traditional tea, “tea bars” and “tea rosettes” are common in Asia. The method of compressing tea into tea bars dates back thousands of years. The tiles are made from the stem of a leaf, whole and crushed tea leaves glued together with rice extract. The tea rose collected in a bundle, when brewed, gradually blossoms and turns into a rose or peony.