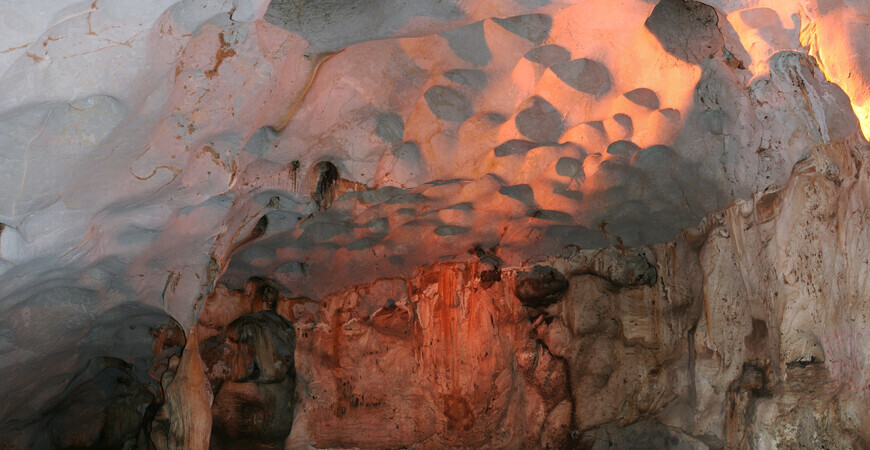 Karain Cave is not only the largest natural cave in Turkey but also a historically important place where human traces dating back to Paleolithic times were discovered. During excavations, archaeologists have found human remains, animal bones and inscriptions on the walls of different eras, which meant that Karain Cave has always been inhabited and sometimes even been a pagan temple.

Although many of the cave’s archaeological finds are now preserved in major Turkish museums, including the Archaeological Museum in Antalya and the Marmaris Archaeological Park, the cave is worth your visit. Tourist groups do not come here, so you can walk through the cave labyrinths all alone, imagining yourself a real archaeologist. And most importantly, see with their own eyes the excavation sites, ancient stalactites and stalagmites.

The cave is located in the Mediterranean region of the country, on the slope of the rocky Mount Chan and at an altitude of about 400 meters above sea level. The rock is surrounded by picturesque fields and pomegranate orchards. Because of the gardens, this area is nicknamed the “pomegranate capital” of Turkey. On the way to the cave you can also see a lot of livestock grazing in the nearby meadows – goats, cows and horses. Scientists believe that such a convenient location of the rocks and the cave itself, led people to choose this location as their place of residence since the Paleolithic era.

The cave is one of the largest natural caves in the country – its height is about 150 meters. The walls and floors of the cave consist of limestone tuff, and in some places onyx. There are no hiking trails to the cave, only stone stairs with dilapidated steps, which have to climb up 70 meters. The stairs offer a beautiful panorama of all Chan Mountain neighborhoods.

The first archaeological excavations in Karain Cave were conducted in 1946, under the direction of Turkish professor Ismail Kilic Kokten. Then the research of Turkish scientists continued with short interruptions until 1973, when other European archaeologists joined the study of the cave.

READ
Holidays in Italy with children. 12 cities and places to visit

Within a few decades, evidence was found in the cave that people lived here even 25,000 years ago. Thus, the remains of the oldest man in modern-day Turkey were found here and many of the objects found were about 500,000 years old. They also found artifacts from the Paleolithic, Neolithic and Bronze Age. They recognized tools, ancient pottery and weapons such as arrowheads.

In addition to human remains, the skeletons and bones of animals such as bears and lions were found in the cave. Paintings and inscriptions have been found on the walls of the cave, presumably used for religious purposes or for sacrifices. According to the researchers, this may mean that there may have been a temple in which people worshipped the gods.

The most interesting thing is that archaeological excavations are still going on and you can observe them in several halls of the cave. There are probably many discoveries ahead for the archaeologists. Now some of the finds are on display at the entrance to the cave, but most of the valuable finds can now only be seen in museums.

There is only one entrance to the cave – through a wide grotto, which you have to get to by an abandoned stony path that looks like a ladder. It will take you about 20 minutes to get to the top. Inside you will be met with gloomy and mysterious labyrinths of corridors that branch into eight small halls of the cave. Some of the halls are closed to tourists because of archaeological excavations or because of the risk of rock falls.

Walking around the cave halls, you can admire the stalactites and stalagmites, which were formed naturally thousands of years ago. Or, for example, to find ancient drawings and inscriptions that decorate the walls of the cave. These drawings were left here by people still in the Paleolithic era, and according to scientists, they could indicate the place of religious cults and offerings to the god.

First of all, you should take care of comfortable athletic shoes, because the ascent to the cave is rocky and unequipped for tourists. Inside the cave, the floor is slippery and clay and the lighting is not very good, so you will need comfortable shoes there, too, so you won’t fall in anything. Also, it’s best to have a flashlight with you. The cave has lighting, but it may not work or be dim in some rooms.

Before visiting the cave should take care of warm clothes, as inside it is very high humidity, and the temperature is kept at around 18-20 degrees. And also, it is worth taking with you drinking water. Climbing up can be tiring, and there is no infrastructure or grocery stores nearby. There are a lot of rest benches on the way up, where you can stop and catch your breath.

Admission to the cave costs 12.5 Turkish Liras. It is best to carry petty cash, as there are no ATMs or stores around where you can change banknotes.

If you wish, you can examine the archeologists’ finds, which are located in the exhibition center near the entrance. However, most of the valuable finds are now preserved in major museums in Turkey.

Panorama inside the cave:

How to get to the cave

From Antalya Bus Station to the cave is public bus number 506. You have to go to the final stop – “Yağca”, the road will take about an hour. Then you have to walk about 30 minutes. On the way you will meet signs to the cave.

You can rent a car in Antalya or take a cab to the cave, then you do not have to walk extra kilometers. The trip by cab will take 30 minutes, but will cost about 150 Lira. You can arrange for a cab driver to wait for you at the cave and take you back to Antalya. It will not take you more than half an hour to see the cave.

By car from Antalya you have to go along the highway D650 in the direction of Burdur. After about 15 kilometers you will get to a small village Yagcda. In the village you will see a sign for the cave – “Karain Magarası”. At the sign you turn left and go straight ahead for about 3 more kilometers. There is a parking lot next to the ascent to the cave and it takes about 10 minutes to get there.