Archeological Museum on the Map of Antalya

The idea to create the Archaeological Museum in Antalya belongs to the mentor of the last Ottoman sultan, the educator Suleyman Fikri Bey. At the end of World War I Antalya was occupied by the Italian military and Italian archaeologists began removing archaeological artefacts from the city center to their embassy grounds.

In order to prevent the loss of ancient treasures, Suleiman Fikri Bey asked the authorities of Antalya to appoint him as an official of archaeological finds and to grant him the right to establish the Antalya Museum. Thanks to his efforts, many archaeological sites were left in Turkey.

The museum was opened in 1922 and was first located on the grounds of the Alyaddin Mosque, then moved to the Yivli Mosque in 1937 and worked in its own separate building since 1972.

In 1982 the museum was closed for restoration, and in 1985 it was reopened to the public.

The Antalya Archaeological Museum has 13 exhibition halls, one children’s exhibition and an open-air area. 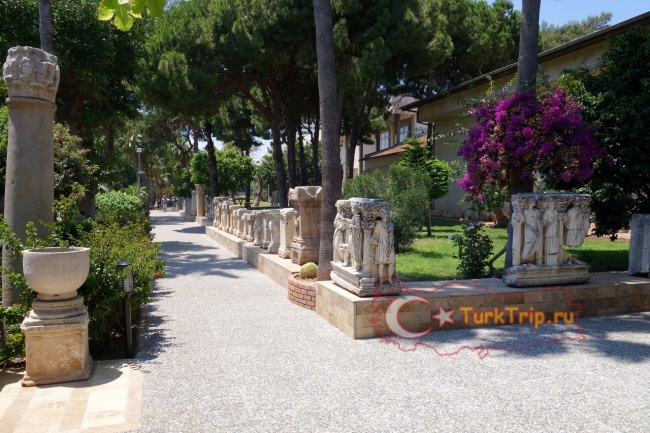 All the exhibits are distributed throughout the museum in chronological order. There are also thematic halls, for example, in one room only sarcophagi are displayed, in another – only coins, in the third – only icons, etc.

Halls of the Archaeological Museum

The first hall after the entrance where the ceramic figures and handicrafts representing the history of Turkey from antiquity to the present are exhibited.

READ
Strasbourg Cathedral is one of the most beautiful in Europe 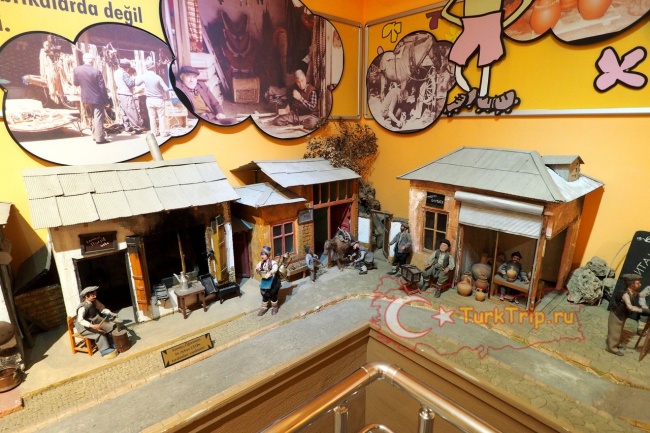 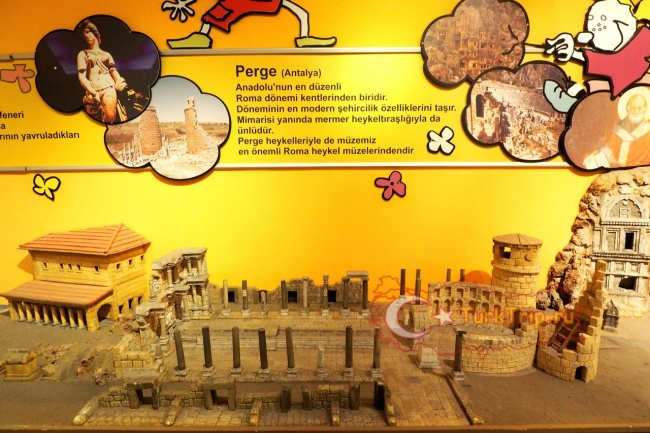 In this hall children can see the main sights of the country in miniature, as well as learn about the life and crafts of ordinary Turks. Very interesting and memorable exposition.

On display are exhibits from the Paleolithic period to the Roman age. Mostly animal fossils and kitchen utensils (dishes).

The results of excavations from the Neolithic, Eneolithic (Copper Stone Age) and Early Bronze Age.

5. Section of the Classical Period.

Clay statues, wine bowls and dishes are on display.

In one of the windows is an important statue of Apollo.

Also on display are sculptures of the Roman period, which occupy the largest space in the museum. 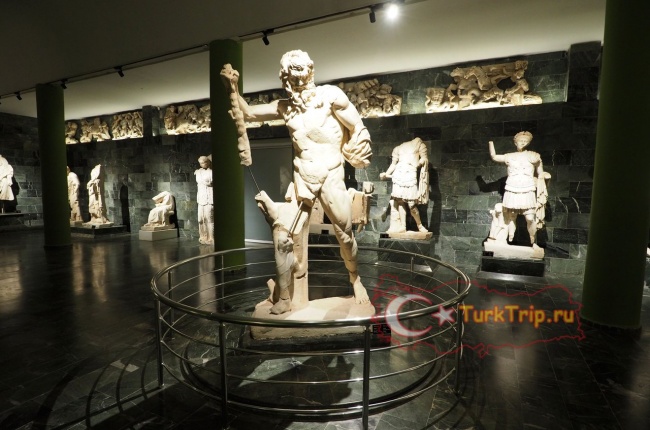 This room displays statues of mythological figures dating from the 2nd and 3rd centuries AD: Minerva, Zeus, Artemis, Aphrodite, Asclepius, Hermes, Marsius and others. They were found in excavations at Perga. 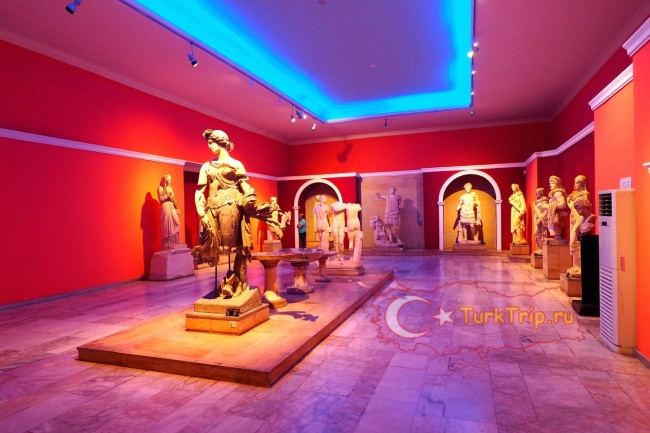 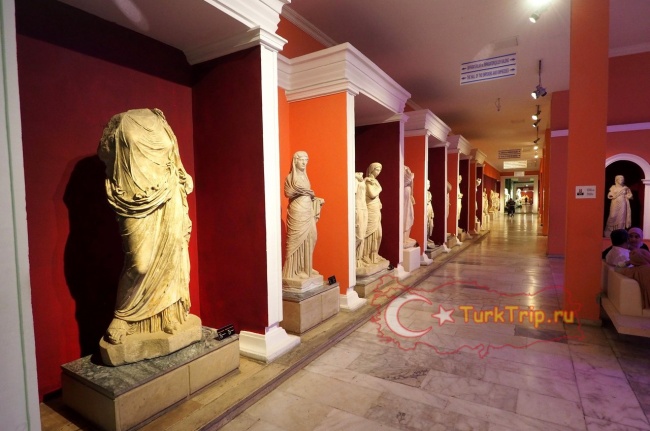 Presented are statues depicting emperors, empresses and other characters from the Roman period.

Here you can see the sarcophagi of the Roman period. 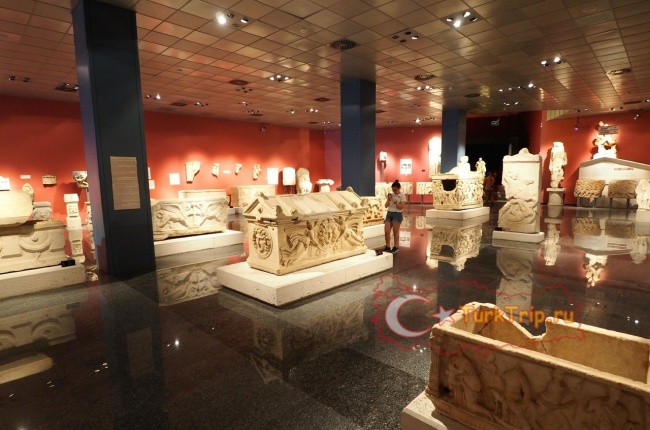 The most beautiful of them are the sarcophagus of Domitias and the one that shows the twelve feats of Hercules. 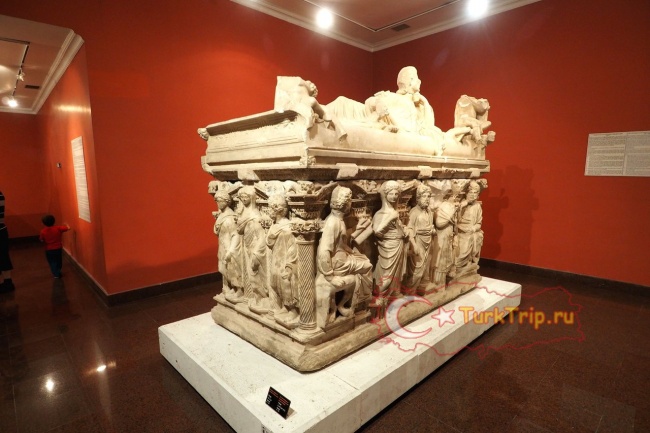 On display are Byzantine era mosaics from Xanthos, the capital city of ancient Lycia, and icons from the region around Antalya.

Here you can get acquainted with the sacred relics belonging to Nicholas the Wonderworker, displayed in a special box. There is also an exhibition of wooden icons depicting the life of Jesus Christ. 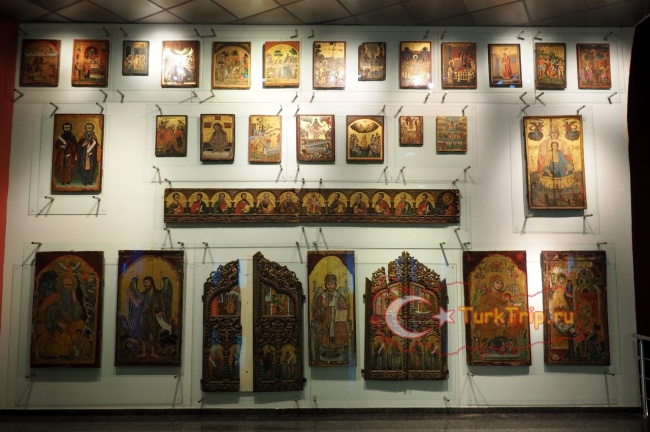 Lamps and glass objects from the Roman and Byzantine periods, a silver tray with gold inlay, incense holders and lamps (6th century AD) are on display. At the front of the room are lintels from a tomb found opposite the ancient city of Limira.

READ
The 10 most beautiful bridges of Venice, Italy

One can see gold, silver and copper coins from the Hellenistic to the Ottoman period. 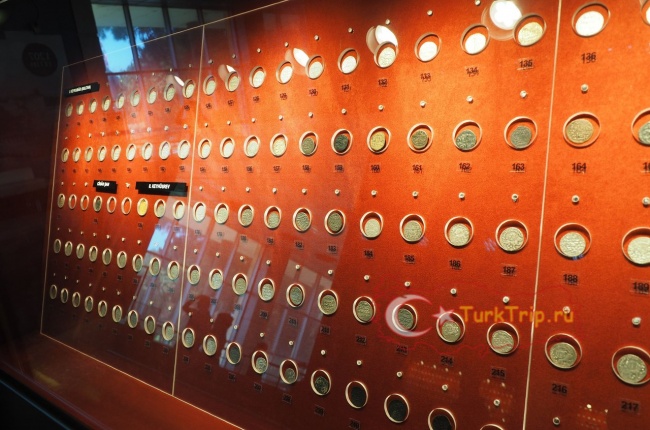 The most interesting ones are the city and imperial coins.

13. An exhibition of the Turkish-Islamic period.

This room contains samples of Seljuk and Ottoman tiles, carpets from the Ottoman period, books, candlesticks, lamps, and accessories of dervishes.

Clothing, embroidery, weapons, and metal objects from the Antalya region are on display here. One corner of the room is furnished like a typical Anatolian house.

1. You can rent an audio guide in Russian at the museum’s cash desk. The audio guide makes a walk through the museum very interesting and informative. The price is 10 lire.

Large bags and backpacks must be left in the storage room to the right of the main entrance. Free of charge. 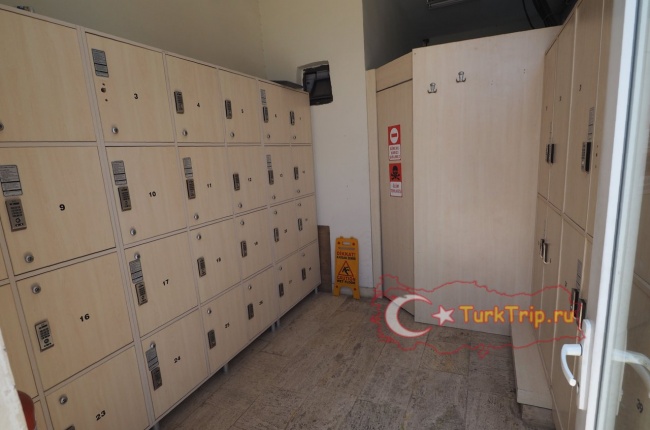 3. The museum has a mini zoo with birds: peacocks, geese, ducks, roosters and chickens. It is located in the open-air exposition area. 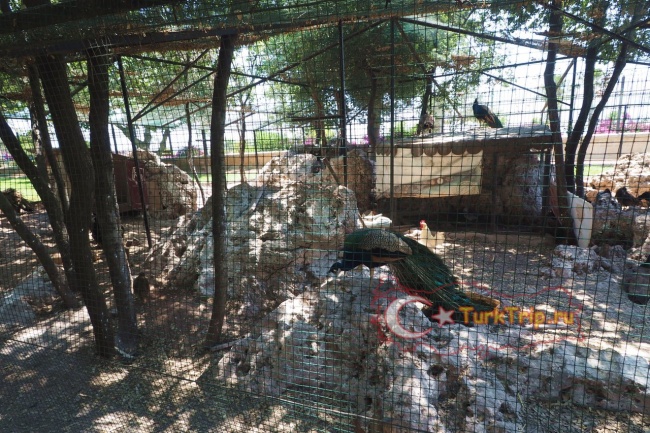 4. A visit to the Archaeological Museum is included in the Museum Card. It can also be purchased here. 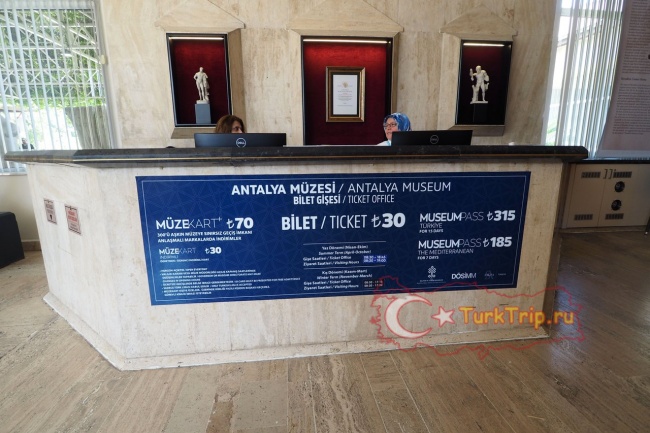 5. There is a cafe on the territory, offering light snacks and drinks. 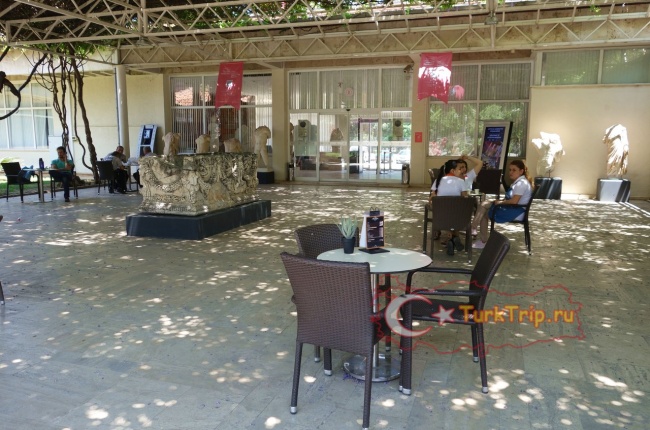 There are also places to relax – both indoors and outdoors. 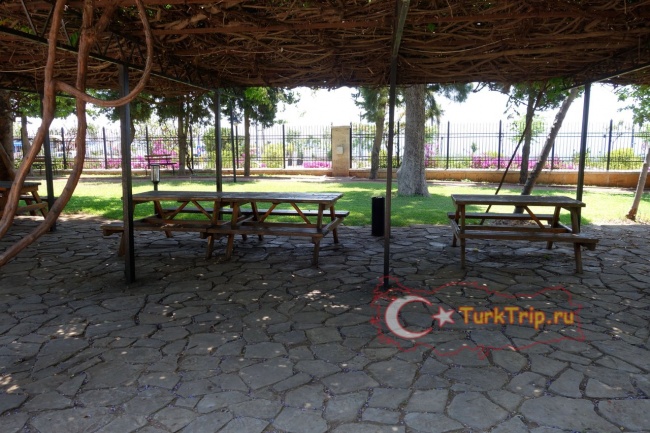 6. At the exit there is a souvenir store. 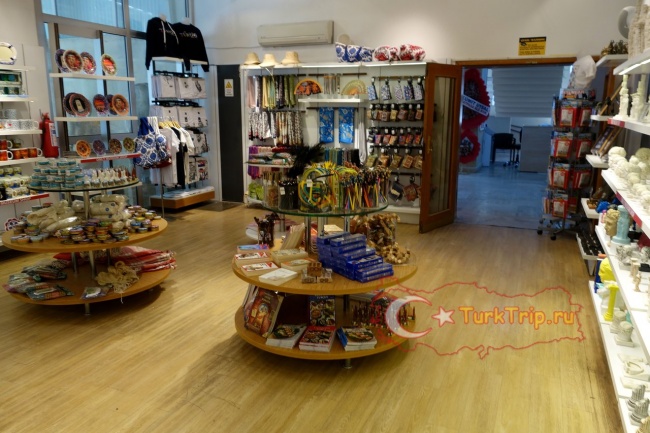 How to get to the Archaeological Museum

The Archaeological Museum is located in the western part of Antalya, at the beginning of Konyaalti Beach. There are several ways to reach it from Antalya:

The Nostalgia Retro Tram has a circular route from the eastern part of Antalya Old Town to the Archaeological Museum. It runs about once every half hour. The final stop is called Muze. From it to the museum is a 3-minute walk.

City bus routes KL21, KC06 and others stop at the same stop.

READ
The best places to see the Northern Lights in Norway

A visit to the archaeological museum is often part of a sightseeing tour of Antalya. Such tours are offered from Kemer, Side, Belek, Alanya, Antalya.

The working hours of the Antalya Archaeological Museum differ in summer and winter:

The ticket price for adults in 2020 is 45 liras, children under 12 years are free. Rental of an audio guide is 15 liras. 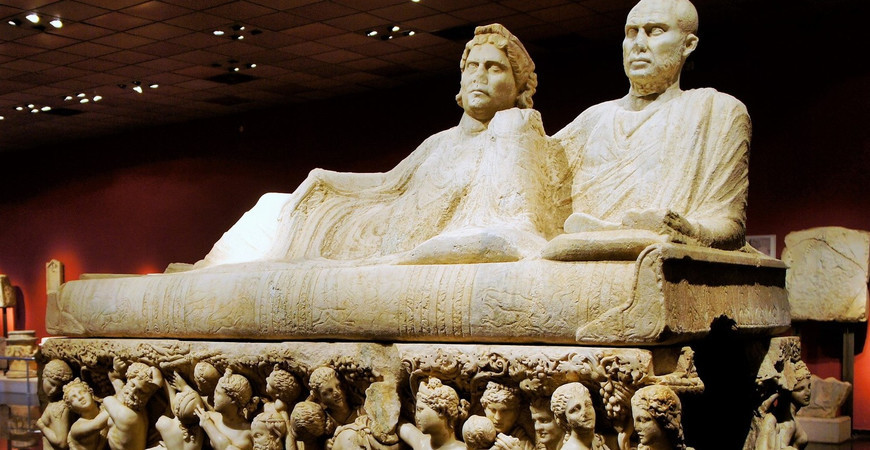 Antalya is a city known not only for its resorts and beaches but also for one of the largest archaeological museums in the world. Antalya Archaeological Museum (aka Antalya Museum), located in Konyaalti and is a repository of a variety of historical exhibits. In total, there are about 5,000 artifacts within the walls of the building, which has a total area of 7,000 m². Due to lack of space in the exhibition halls, 25-30 thousand exhibits are stored in the storage rooms. The importance of the museum was recognized by the European Council in 1988.

The museum was founded by the Italians who occupied Antalya in 1919. The archeologists who arrived with the troops in Turkish Antalya began to hand over the artefacts found during the excavations to the country’s consulate. Had it not been for the prompt intervention of Suleyman Fikri Bey, Turkey would have lost many of its artifacts. In 1922 the historical treasures were moved to Alaeddin Mosque. In 1937 the exhibits were moved to a new location, Iyivli Mosque. Then the museum gets its official status. The museum received its present residence in 1972. Ten years later the building was restored till 1985.

The Antalya Museum has thirteen exhibition halls and an open space. In addition, the building has workshops, laboratories, a cafe, photography and administrative offices, a conference room and even living quarters for staff. Well, let’s start our virtual tour.

READ
All about Japanese cuisine

This is the first room where visitors begin to get acquainted with the exhibits. The artifacts are antique piggy banks and toys. As a bonus – in this room, children can mold any figure themselves or draw a picture. You can take your creation with you, or you can leave it as a memento of the museum.

Here you can see a variety of inhabitants of our planet. Interest lies in unicellular organisms, as well as various fossil bones, human and animal remains, pictures and diagrams.

This hall will enthrall all history buffs, as it presents findings found in Okuzini, Karain and Semahoyuk. Among the artifacts from different time periods are kitchen utensils and fossilized animal remains.

This room displays items discovered by archaeologists in Khachilar. Many of the excavations were made in the vicinity of Semahoyuke. All the exhibits date back to the Neolithic, Eneolithic and Early Bronze Age eras.

In this hall the figures and images of gods, as well as heroes of myths are exhibited. Historians attribute these artifacts to the ancient Roman period, second to third century AD.

Vessels, wine vessels, clay figurines, a statue of Apollo – all these exhibits are united by the fact that they were created in the historical period from the Mycenaean to the Hellenistic period. In this hall you can also enjoy viewing the largest section of the exhibit, the sculptures from the ancient Roman period.

The name of the room speaks for itself; the main characters of the exposition are the statues of emperors and their female companions. They are all made of plaster, marble and clay.

In this hall you can see and appreciate lamps as well as glass objects from the ancient Roman and Byzantine periods.

The Hall of Burial Culture

The authentic sarcophagi on display are fascinating and admired for their beauty and luxury. Among all of them, the sarcophagus of Domitius stands out for its beauty, as well as the sarcophagus depicting the feats of Hercules.

This room is exploring with the Byzantine mosaics and icons that were found in the region of Antalya.

A large number of coins of different materials from gold and silver to electron and copper are exhibited in this hall. The oldest coins are dated back to 2500 years ago. There are also quite rare coins which were minted for certain historical events.

Ethnographic halls consist of three rooms. In the first one you can see ancient jewelry, household items, shoes, clothes, clocks and other things from the Ottoman and Seljuk periods. The tour ends with a demonstration of the interiors of the bedrooms and living rooms of ordinary Anatolians.

How to get to Antalya Museum

The museum is located in close proximity to Ataturk Park, within walking distance of the city center. You can get to the museum by car, bus, retro streetcar and cab.

The retro streetcar leaves from the center of Antalya to Konyaalti every half hour. The whole trip takes ten to fifteen minutes. You have to go to the final stop.

You can take bus number LC07 from the popular tourist areas of Lara or Kundu. You should also go to the last stop.