Turkey, a country located on two continents: a smaller part in southeastern Europe and a larger part in Asia, especially in the Asia Minor Peninsula. These two different worlds are separated by the Bosphorus Strait, over which two bridges stand in Istanbul. Istanbul, though not the capital of Turkey, is undoubtedly the most important city. The area of the Republic of Turkey is 780,580 km. Turkey, a democratic state, borders Georgia, Armenia, Azerbaijan, Iran, Iraq and Syria. In the European part, Turkey is still bordered by Greece and Bulgaria. 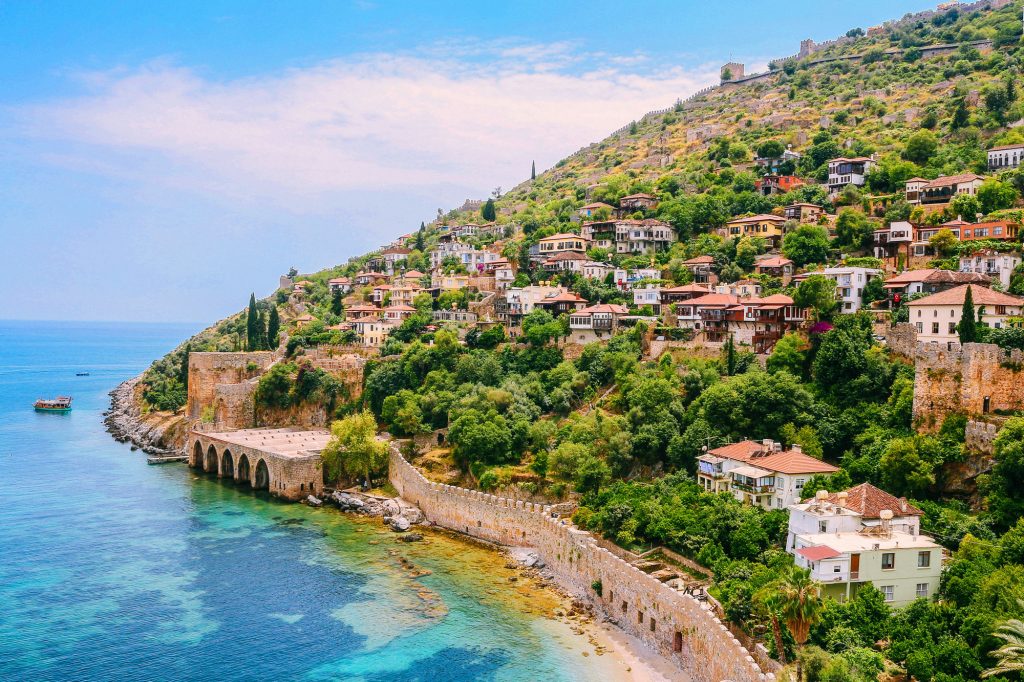 Although the Turks have recently struggled to become part of the European Union, their country is very exotic to Central Europeans and bears little resemblance to Europe, be it the landscape, the climate, the religion or the mentality of the locals. The country is home to 75 million people of predominantly Muslim faith (99%), making Turkey the 17th most populous country in the world. The religion is dominated by Sunni Islam, but there are also small groups of Orthodox Christians. Turkey is a country without a state religion; the constitution guarantees freedom of religion and thought.

Turkey is fairly mountainous country, only in the coastal areas there are narrow stretches of lowlands. About a quarter of the country lies at an altitude of over 1200 meters. The highest mountains are in the east. There is also the highest mountain in Turkey, the Ararat, which is 5,165 meters high. In the north, the Pontic Mountains, while in the south and southeast, the country borders with the Taurus Mountains.

Several important rivers flow through Turkey, the largest of which are the Euphrates, Tigris, Kizilirmak, Great Menderes and the Araks. Turkey also has more than 250 lakes, the largest of which soda Van covers an area of 3,714 km and Ace, an area of about 1,550 km. Due to the collision of the Anatolian, Eurasian and Arab continental plates in the area of Turkey, the country is quite often threatened by earthquakes. 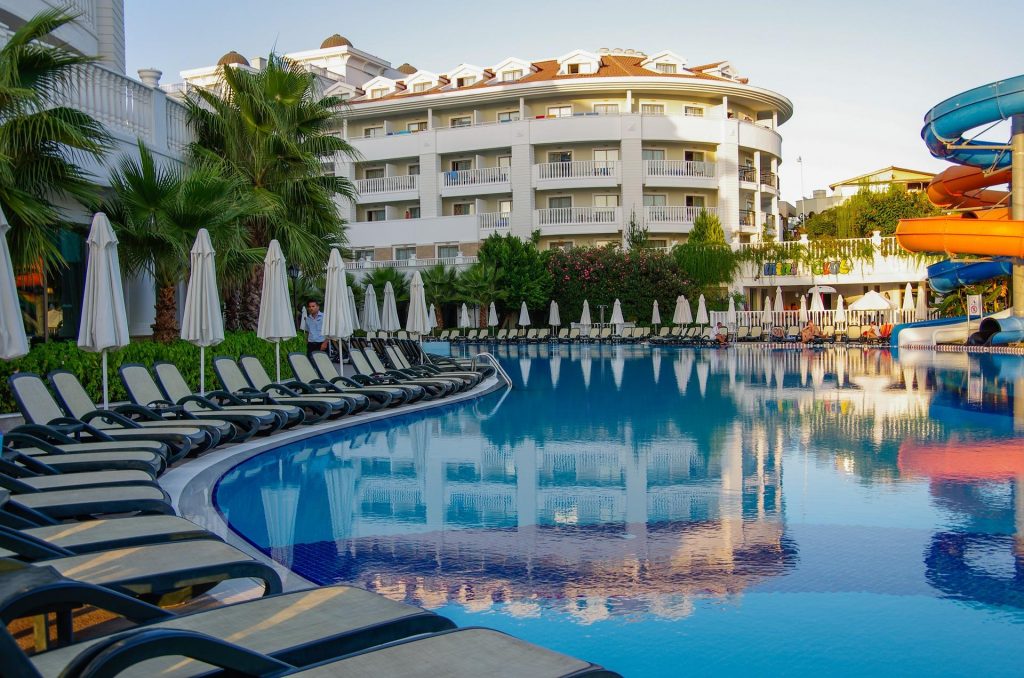 Turkey, a country of incredible natural beauty. In addition to hundreds of miles of beaches and high mountains, there are wild steppes, fertile lowlands, stunning waterfalls and beautiful wild national parks. Also on offer is an inexhaustible number of ancient monuments, of which there are paradoxically more in the country than in Greece. We can mention, for example, the ancient city of Ephesus, the spa town of Hierapolis, the mountain village of Termessos and numerous monuments of Istanbul. There are also tea houses, hookahs, mesmerizing music and cheerful oriental dances in Turkey.

The history of Antalya, which today is the largest and most visited center of the Turkish Riviera, dates back to 150 B.C. when it was founded by King Attalos II of Pergamon. This far-reaching history makes Antalya a city full of historical monuments and one of the most visited places in Turkey. Antalya experienced its greatest heyday in the 1980s, when the entire Mediterranean coast began to open up to foreign tourists. Today Antalya, with its population of one million, is considered the unofficial capital of the Turkish Riviera. In addition, during the main tourist season the city is visited by crowds of visitors from all over the world, so it is quite busy.

Most people come to Antalya to swim in the warm Mediterranean Sea, laze on the endless sandy beaches, explore the surrounding countryside and nearby mountains. Thanks to the developed infrastructure there is nothing unnecessary, all the interesting places in the city are quite accessible. Antalya, the center of tourism, literally dotted with hotels, guest houses and other means of accommodation, as well as restaurants, clubs, stores and discos. 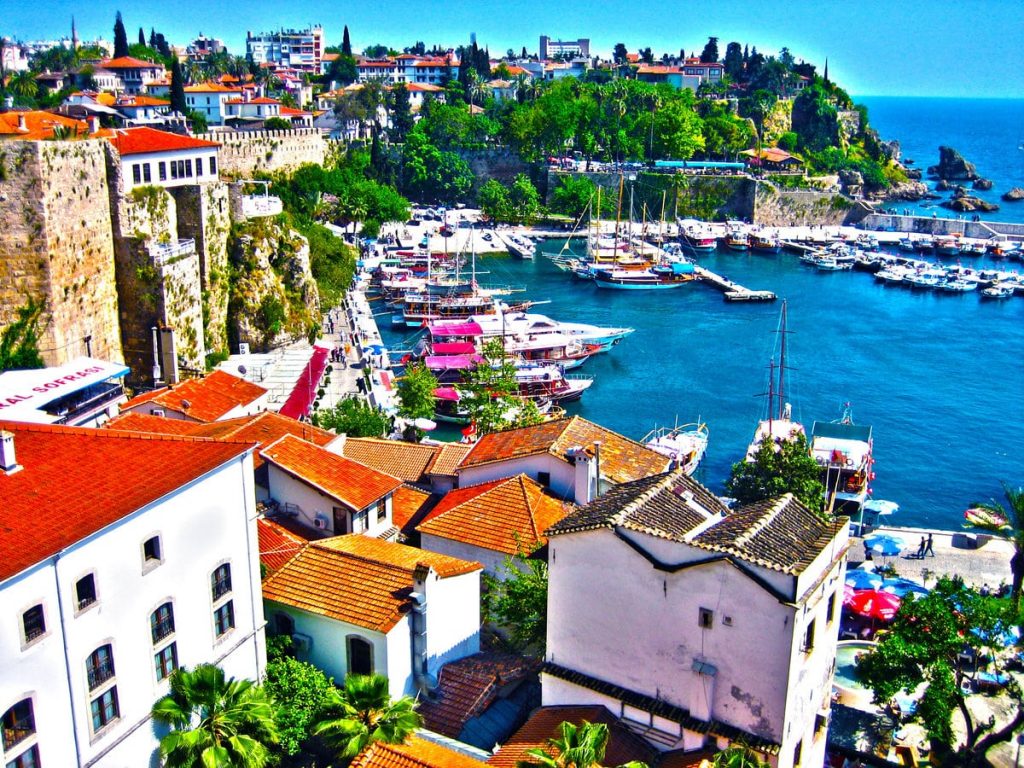 The coastline is surrounded by vast sandy beaches, the bustling Konyaalti to the west and the quieter Lara to the east. Both have become meeting places for sports enthusiasts as well as families with children. Along these beaches there are eateries, beach bars and renowned seafood restaurants that offer seafood specialties.

The center of the city is the district of Kaleici, where you can see many monuments, such as the Roman city walls and Hadrian’s Gate, which commemorates the reign of this proud Roman emperor. Hadrian visited Antalya in 130 A.D. and had these three-arch gates erected in his honor.

The round tower Hıdırlık, which was a lighthouse during Hellenistic Greece, can be seen walking through the winding streets of the city. In the old town you can also see the 38-meter-high Yivli Minaret, built by the Turks in the 13th century. Today it is an indispensable and irreplaceable symbol of the city, inside which there is an Ethnographic Museum. 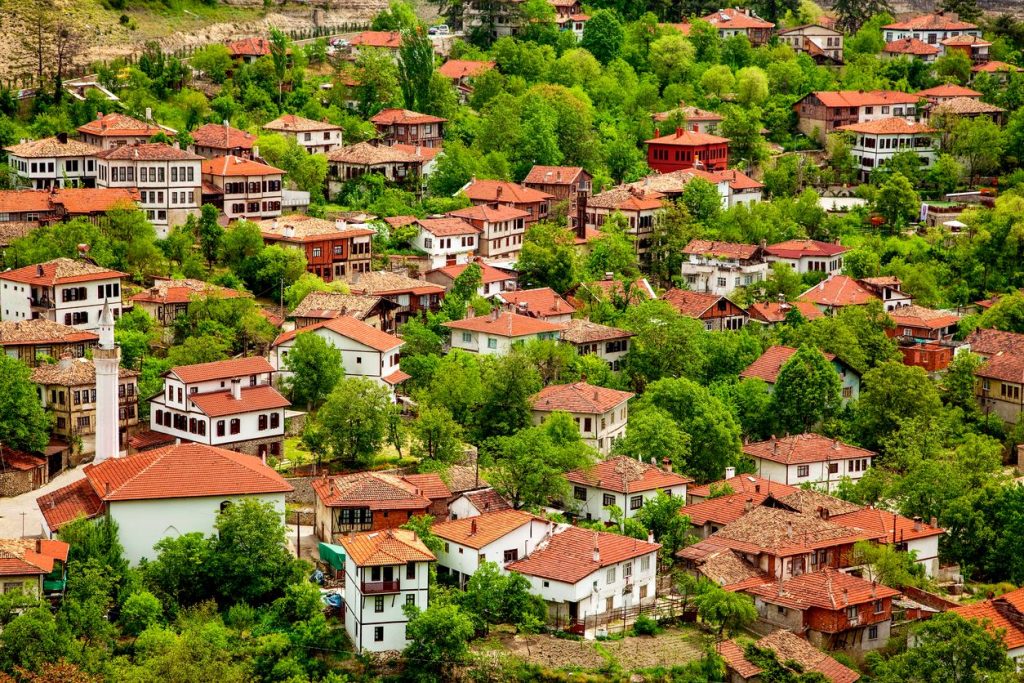 On the shores of the Black Sea, in a hilly area lies the ancient city of Safranbolu , which is intertwined with a maze of narrow streets, stores and Ottoman houses. Because of its 1008 protected buildings, Safranbolu is included in the UNESCO World Heritage List. In addition to ancient Ottoman houses there are also many mosques, domed tombs, decorated wells and about a dozen historic bridges.

In the main square stands the Kazdagli Mosque, built in 1779. Also worth seeing is the Mehmed Pasha Mosque, the Turkish bath Cinji Hamam, the merchant’s temple Cinzhi Khan and the street of the historic shoemakers’ market. Also interesting is the Keprülü Mosque.

The city of Assos is currently divided . Half of its inhabitants live around the imposing ruins on the hill in Assos, the other half in the small, picturesque harbor below, Behramkal. This is an example of the main characteristics of the Aegean coast of Turkey , the remnants of a glorious past and charming ports and coves. In the 13th century BC, a Hittite settlement was established here.

Its heyday was in the 8th century BC, when it was settled by people from the nearby Greek island of Lesbos. Assos was once a famous ancient educational center. Aristotle, Plato, and others worked here. Plato founded a philosophical school here, and biology and botany were studied here.

READ
What country has the cleanest air in the world? 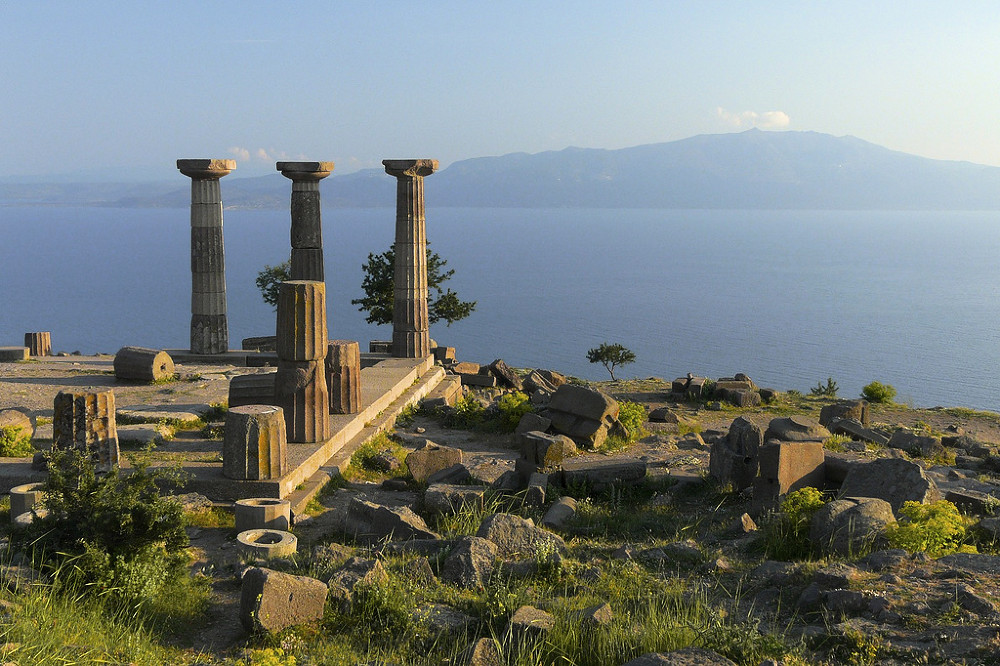 The city was built on a hill 238 m above sea level. There are well preserved remains of the 6th century BC temple of Athena which has Doric columns, remains of water works and reservoirs, agora, gymnasium with mosaics and theaters. The temple offers a magical and breathtaking view of the Bay of Edremit and the island of Lesvos.

The village has well preserved monuments from the Seljuk period of the 14th century, namely the mosque, the bridge and the fort. Assos is full of life, Turkish art and friendly atmosphere. It lies on the clear waters of the Aegean Sea. The coast is carved with romantic coves. The way from Kanakkale airport takes about 50 minutes.