Travelling in Bergen, Norway: Visit the magical city of Fjords

In this guide, we will introduce you to the wonderful city of Bergen in Norway . It is a city on the water, which overlooks a bay in the southern part of the country and is the gateway to the most beautiful fjords. From here, in fact, cruise ships sail to the main Norwegian fjords .

Bergen is Norway’s second largest city and is an hour’s flight from Oslo. It stands on a mountainside overlooking the North Sea in Hordaland county, Vestlandet region. The city has a population of about 290 thousand people. Despite its size, it has the charm of a village, thanks to the picturesque Bryggen neighborhood with its ancient trading warehouses overlooking the water, which are the image of the city on the postcard, and the fact that it is a UNESCO World Heritage Site. 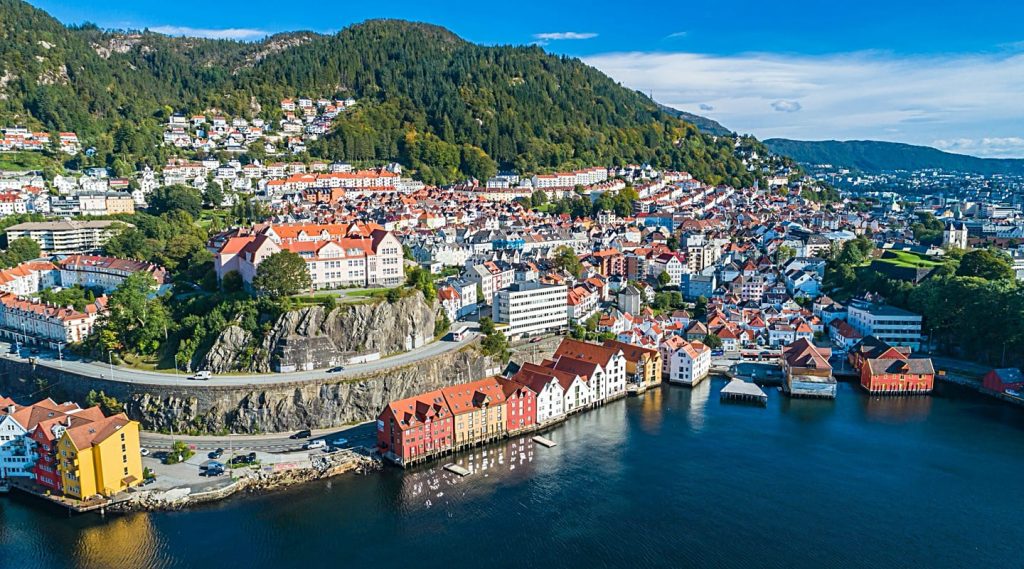 Travelling in Bergen, Norway: Visit the magical city of Fjords

The city of Bergen was founded in the Middle Ages, about a thousand years ago, as a trading settlement. After a period of internal wars in Norway between various claimants to the throne, which resulted in Bergen being the capital of Norway for a few years, in the early 13th century, the city became an important center of the country in the mid-14th century . The Hanseatic League, thanks to the merchants from the north of Germany who established their business here, settling in the area of Bruggen, where they built the characteristic port buildings that housed the warehouses and which are now a World Heritage site . In 1946 the University of Bergen was founded, also internationally important, and many students have made the city younger and livelier.

Bergen is a charming city that offers all the charm of the seaside centers of northern Europe. The mountains that descend to the sea and the colorful wooden houses that rise to meet or rise to the top make for a magical panorama. Seven mountains surround the center, and in winter, when the snow and city lights are reflected in the water, Bergen takes on a dreamlike appearance.

The first thing to see in the city is of course the historic Bryggen district, with its old wooden buildings that once housed the warehouses of the Hanseatic League, and the picturesque wooden houses in which the merchants lived. Bryggen in Norwegian means landing or pier, it is also called Tiskebrüggen, or the landing place of the Germans. The merchants who built the wooden houses and settled here were actually Germans from northern Germany. The area was founded in 1360 when a branch of the Hanseatic League was opened in this part of the city to trade dried fish from northern Norway and grain from continental Europe. 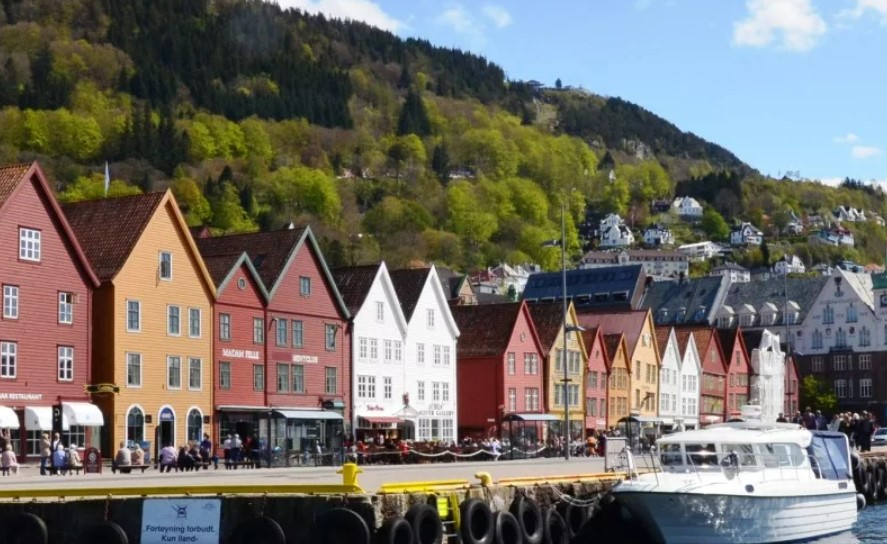 The beauty of Bruggen lies in the long rows of colorful houses lining the harbor promenade. The area is located on the eastern side of Vågen Bay and was the seat of the Hanseatic League from the 14th to the 18th century. Today the former warehouses are home to stores, bars, restaurants and museums. One of the most central and certainly the most beautiful places in Bergen, not surprisingly, has been a UNESCO World Heritage Site since 1979. There are about 280 wooden houses in the area, mostly rebuilt in the 18th century after a major fire destroyed almost the entire area. Another fire in 1955 destroyed other buildings that were later restored or rebuilt. The original buildings make up about a quarter of those that make up the neighborhood.

Bergen’s central square, Torgalmenningen, located near the harbor and open-air fish market, is very well-stocked and has outlets where you can eat fresh fish just caught and cooked locally. On the east side of Vågen Bay, opposite Bruggen, is the Nordnes Peninsula and the neighborhood of the same name, also very picturesque, with colorful wooden houses climbing the cobblestone streets that rise up the hill. At the tip of the peninsula is the Bergen Aquarium .

READ
Fiji Island - the territory on which the state of the same name is located.

The city is an important cultural center with many museums and attractions worth visiting, including the Hanseatic Museum, Bruggen Museum, composer Edvard Grieg’s home, and Bergenhus Fortress, a castle and multipurpose center that hosts exhibitions, concerts and shows . 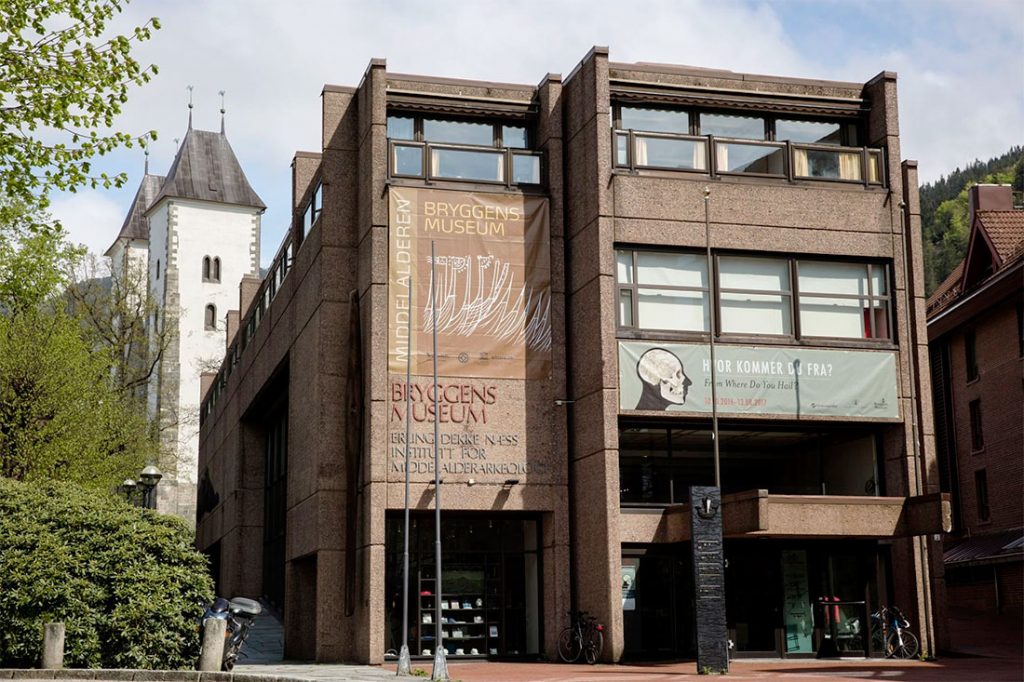 Bergen travel guide: What to see and do

From visits to the old town to museums, there’s plenty to do in Bergen. Don’t miss the funicular ride on the Fløibanen, which takes you to the top of Fløibanen Hill for a great view of the city. The cable car leaves from the city center between the fish market and Bruggen Pier.

There are plenty of cultural events to take part in, including festivals, shows, concerts, music, theater and art performances. The main cultural event of the year is the Bergen International Festival (Festspillene i Bergen), which takes place from May to June at various locations in the city. It is a festival of music, dance, literature, visual arts and folklore. Bergen has many successful street artists and music groups.

Among the things not to be missed are tours of the surrounding countryside and fjords near Bergen . The city is also the starting point for cruises to the main Norwegian fjords. 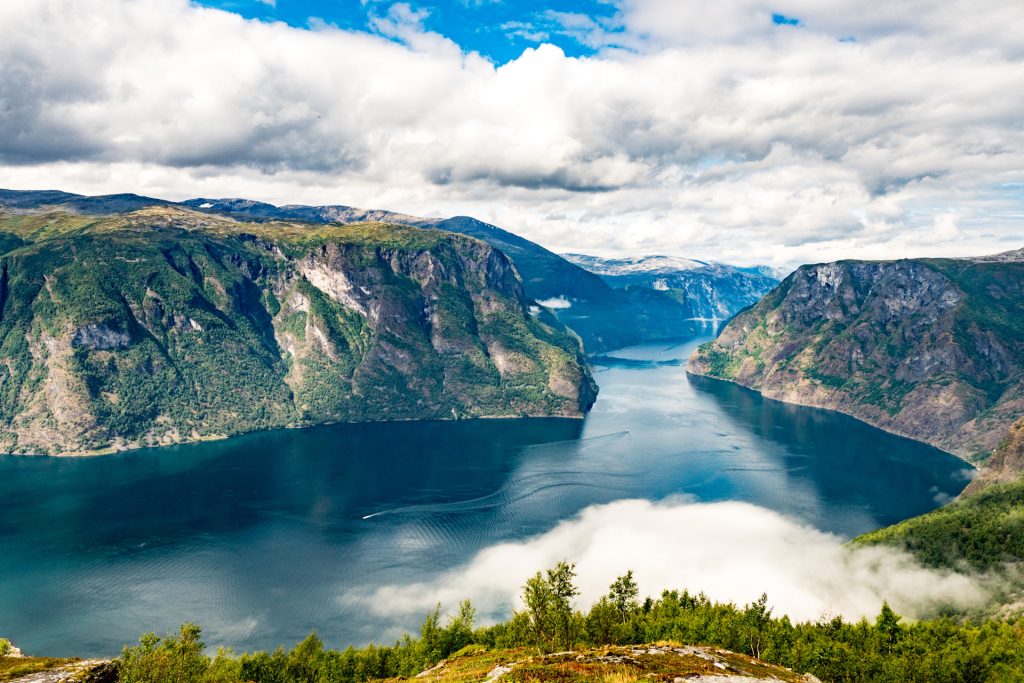 Bergen travel guide: What to see and do

Useful information for visiting the city of Bergen: when to visit it and how to get there

Bergen has a temperate oceanic climate with fairly mild winters and rainy summers. It’s no coincidence that Bergen is called the city of rain. If you decide to visit the city in summer, take an umbrella with you. Aside from the rain, summer is definitely the best time to take a good look around the city, stroll its streets and squares, and visit the surrounding area. However, if you are looking for the charm of winter, with its short days, the cold and the lights reflecting in the sea, this is the time of year for you.

READ
How to choose the best time to travel to Thailand

By train . If you love the train and have time, you can travel by train from Oslo to Bergen, which is considered one of the most beautiful in the world. The route crosses mountains and takes about 7-8 hours.

By ship . Bergen can be reached by ferry from Denmark, departures are from Hirtshals . Or with cruise ships that make a stop in the Norwegian city and then continue to the fjords. 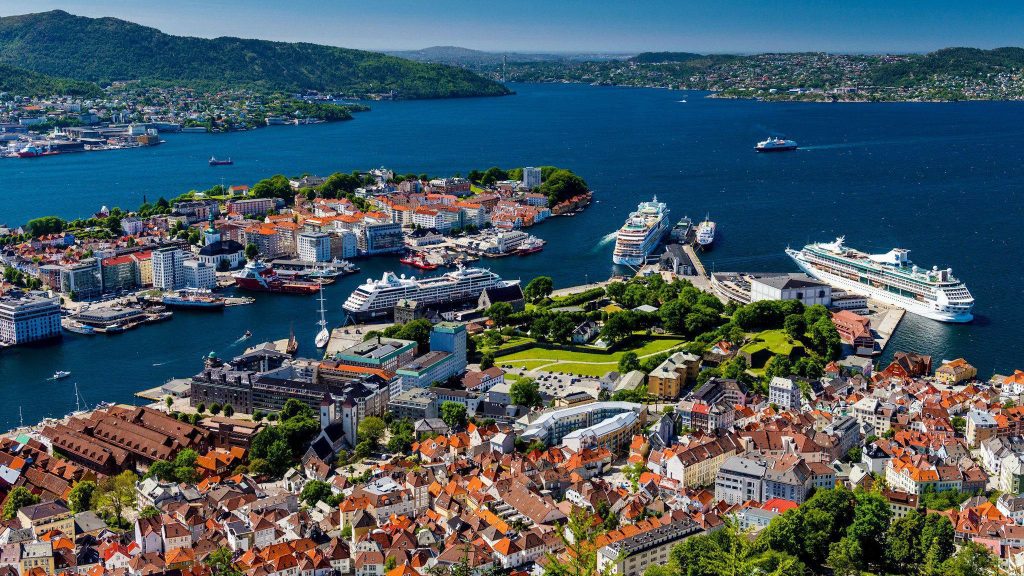