The city of Hue (Vietnam) is located in the heart of the country. From 1802 to 1945 it was the imperial capital of the Nguyen dynasty. Every emperor, in order to immortalize his name, created architectural structures of amazing beauty. Today, the city is the administrative center of Thuyat Thien-Hue Province. It covers an area of about 84 square kilometers with a population of about 455 thousand people. Hue is famous for its historical and architectural monuments, colorful festivals and celebrations. It is also an important educational center. There are seven higher education institutions in Hue (Art Institute, Foreign Language Institute, Medical Institute, etc.) where many foreign students study. 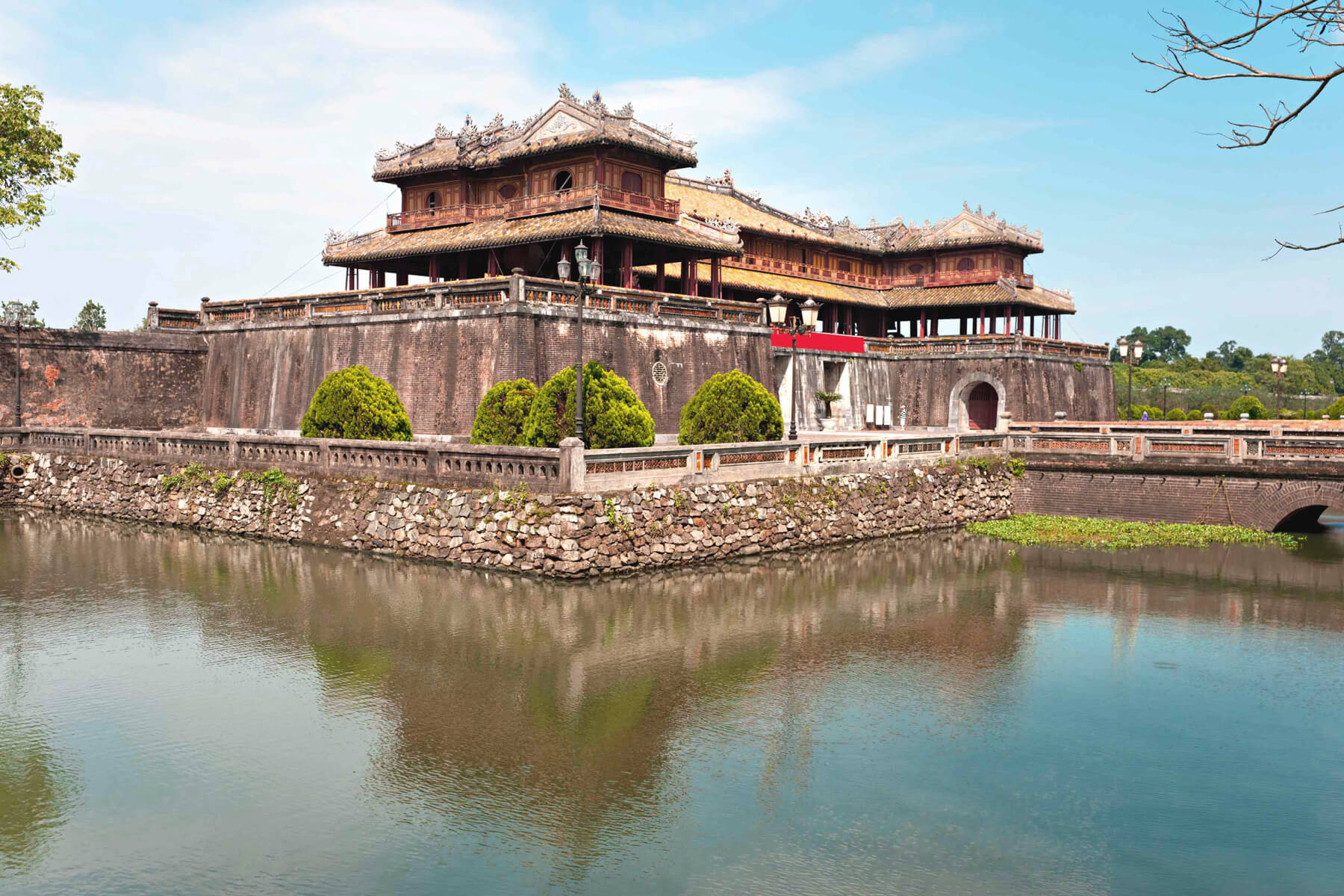 All of Hue is divided into two parts: the Old City and the New City. The old part occupies the northern bank of the river. It is surrounded by a huge moat and fortress walls. There are many sights, to see which would take a whole day. 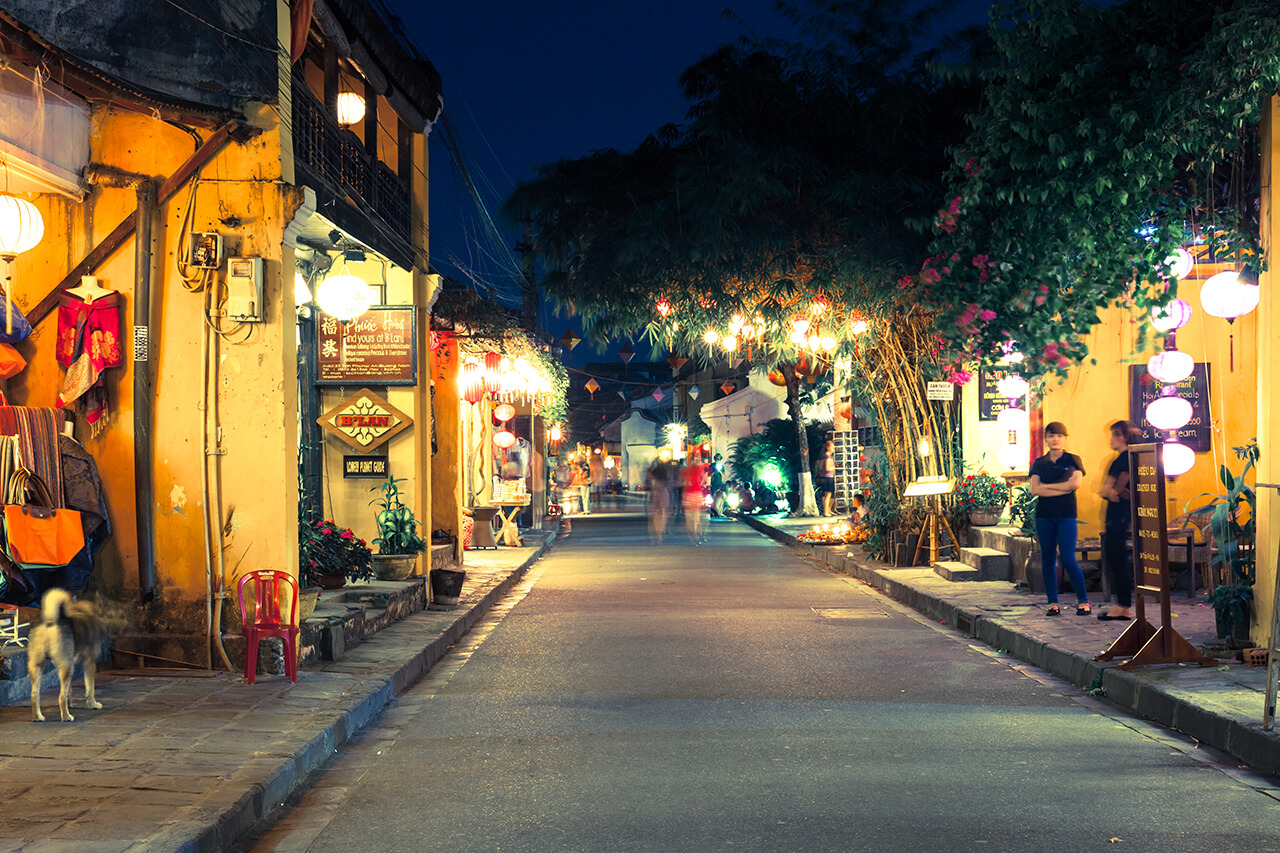 Around the Old Town stretches the New Town, most of which is on the other side of the river. This area has everything you need for tourists: hotels, restaurants, cafes, banks, stores, entertainment. Although the Vietnamese city of Hue can not be called a metropolis, but to the provincial backwater it also can not be attributed. The city has many 10-story buildings, there are large shopping centers, hypermarkets. You can inexpensively rent a bike or motobike and explore all the interesting places.

The main attractions of Hue (Vietnam) are located compactly, so you can see them in one day. The first thing worth visiting is the Citadel, the residence of the Vietnamese emperors. 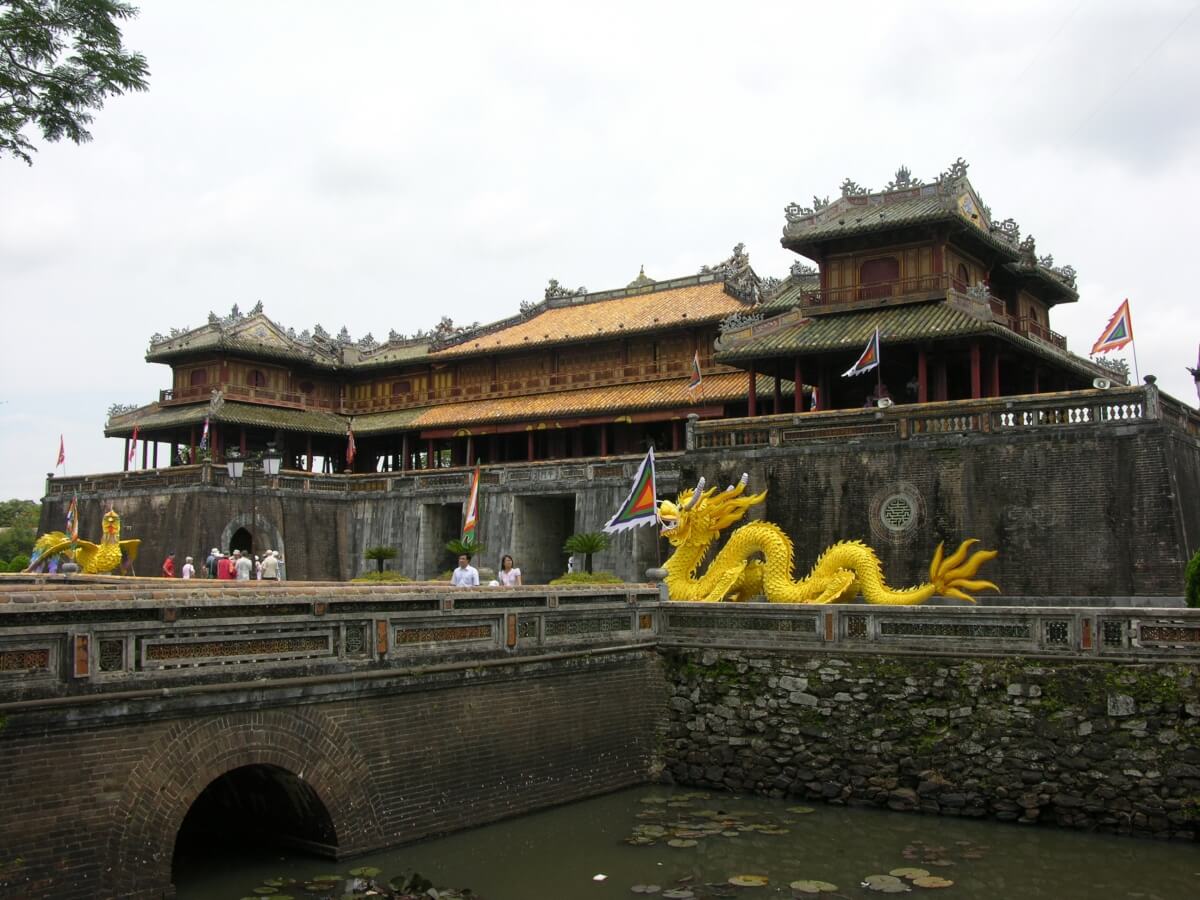 This architectural monument was laid in 1804 by order of the first emperor of the Nguyen dynasty, Gia Long. The citadel is surrounded by a moat 4 meters deep and 30 meters wide. To protect the citadel from enemies, strong bastions and observation towers were erected along the entire perimeter. Exit to the city was provided by folding bridges and reliable gates.

From the outside the Citadel was a securely defended fortress, but inside it was a rich royal court divided into three parts: the Civil, the Imperial and the Forbidden Purple City. 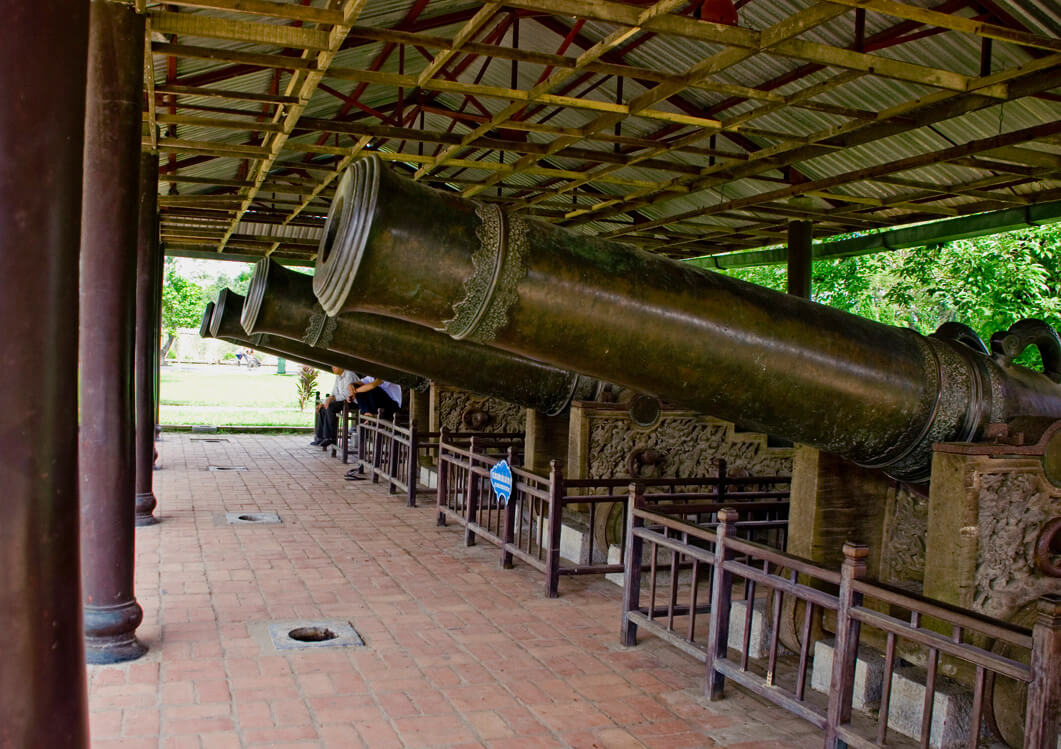 From the Imperial City the state was ruled, and in the Forbidden City the personal life of the Emperor boiled with passions. In the Citadel you can admire the Palace of Harmony, see the famous sacred cannons, and visit the Hall of Mandarins. 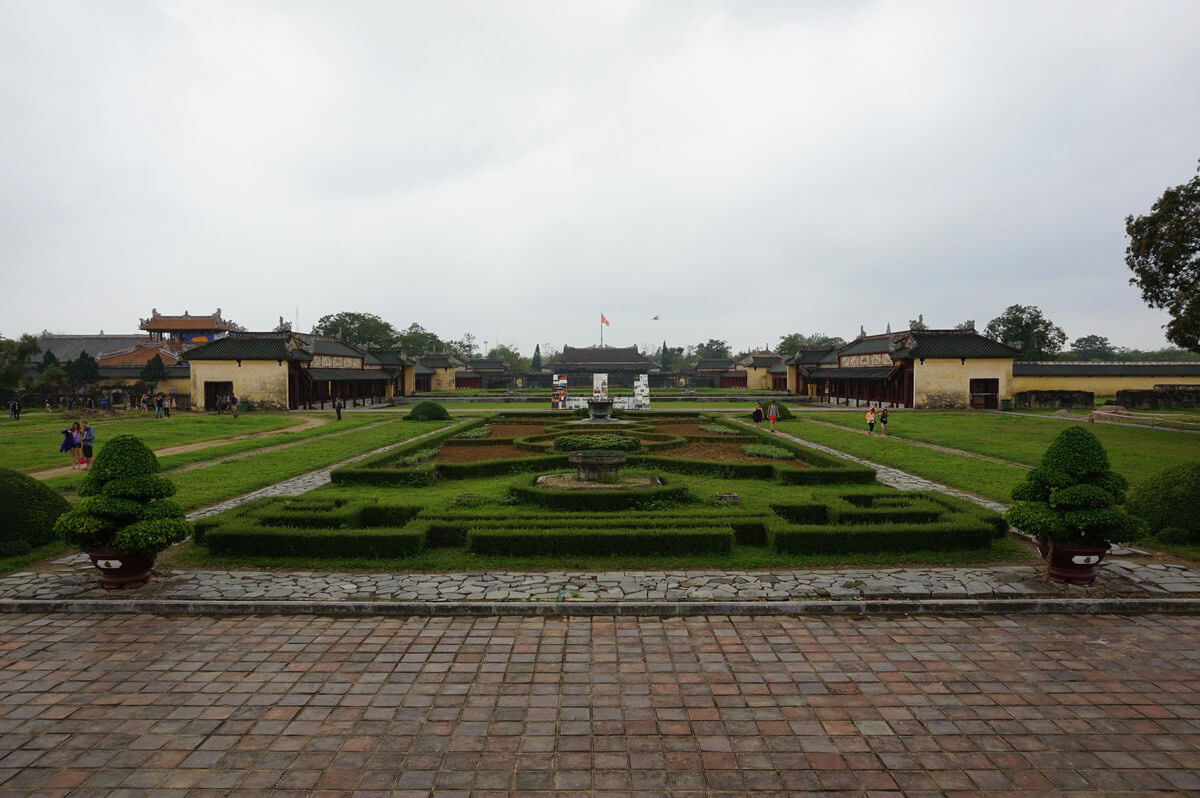 This is part of the Citadel: an entire complex of palaces where members of the imperial family, the ruler’s concubines, servants and physicians lived. Others were categorically forbidden to enter here. The entire architectural ensemble consisted of 130 buildings, most of which were damaged after the American bombings of 1968.

Today it has been restored and one can see the military residence of the emperor, a room for the court physicians, a meditation room, a large kitchen, etc.

One of the highlights of Hue are the tombs of the monarchs. The “city” of tombs is located a few kilometers from Hue. The rulers of Hue began their lives as a transition phase and prepared a place where their souls could find peace and tranquility. So majestic mausoleums surrounded by parks, groves, pavilions, and lakes were created.

From 1802 to 1945, 13 rulers came and went in Vietnam but for reasons unknown, only 7 of them built their own mausoleums. These tombs are among the outstanding monuments of architecture, and they are a must-see. You can get there by boat, but the best way is to rent a bike or motorcycle. Of all the tombs of particular interest are the shrines of Minh Mang, Don Khan, Thieu Chi. 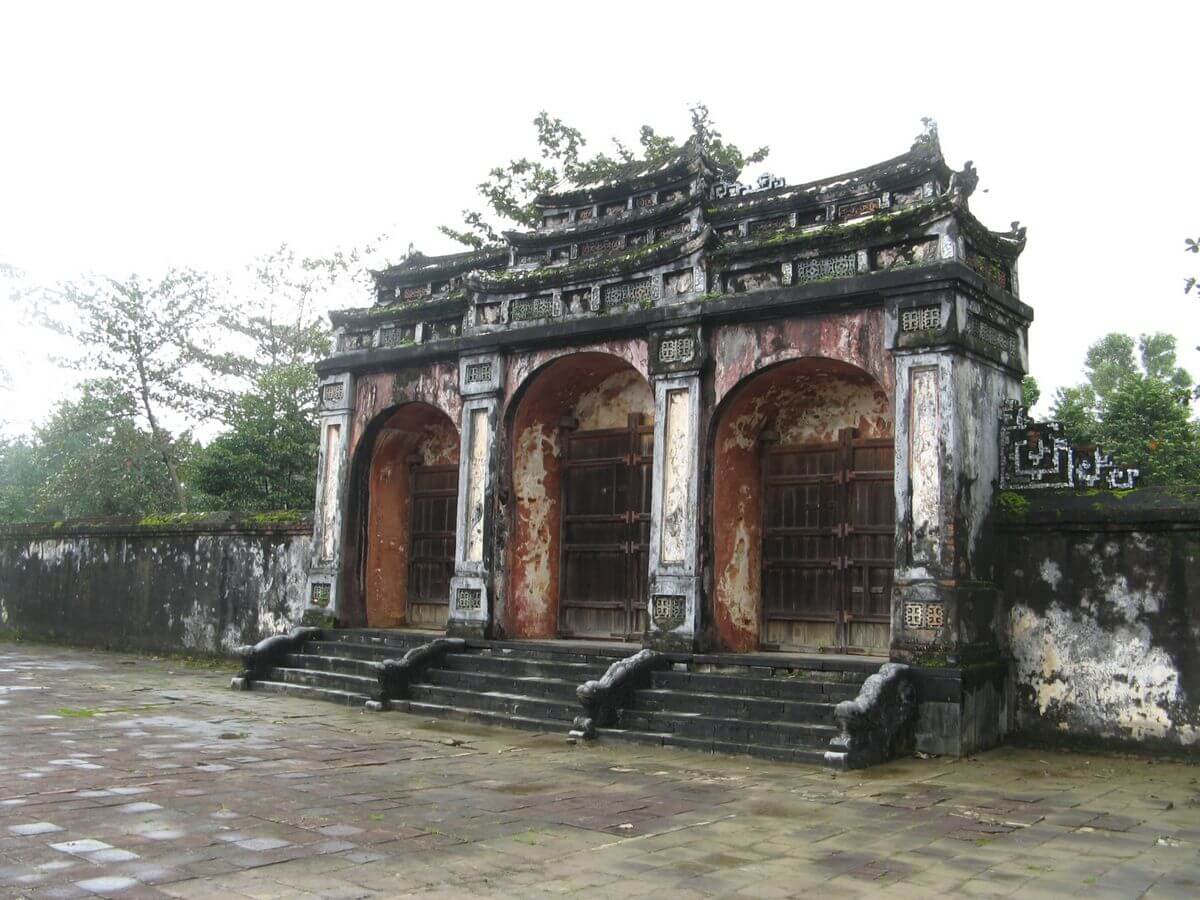 Compared with the others, Minh Mang’s tomb is striking for its majestic and luxurious appearance. Minh Mang was known as a highly educated and cultured ruler of Vietnam.

The tomb was under construction for several years (from 1840), under the supervision of the Emperor himself. But the ruler died before the work was finished, and the construction was completed by his successors.

The entire complex consists of forty buildings. It is a very cozy quiet place on the bank of the fragrant river, it fits harmoniously with the living nature and disposes to a pleasant contemplation. On the sightseeing it is better to allocate at least 2 hours. 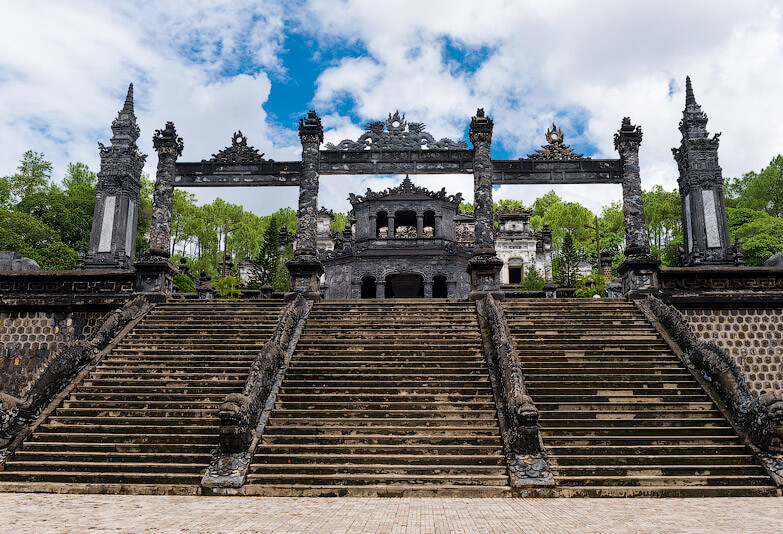 It differs from all the other crypts for its small size and originality. Don Khan was the ninth emperor of the Nguyen dynasty (1885-1889). He owed his reign to the French, who expelled his brother. Don Khan was a puppet in the hands of the French, ruled Vietnam for a short time and died at the age of 25 from illness.

The originality of the tomb is due to the penetration of European culture into the country. It intertwines traditional Vietnamese architecture with French motifs, terracotta bas-reliefs and colored glass. 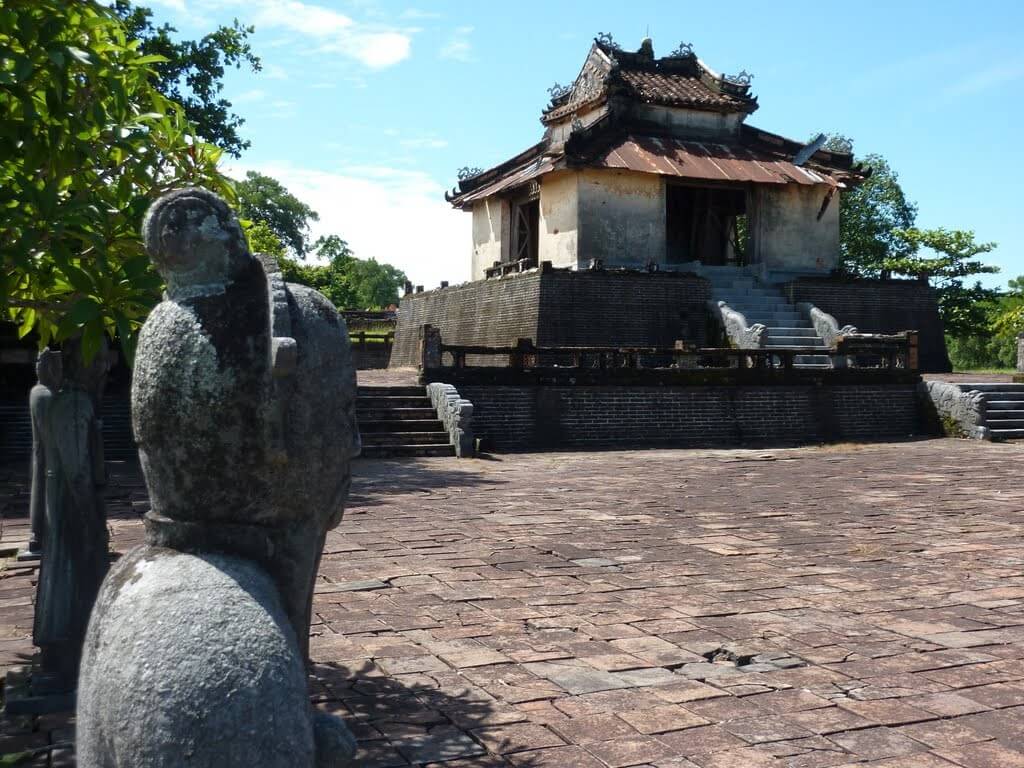 It is located two kilometers from the crypt of Don Khan. It looks very modest – so commanded by Thieu Chi himself. He was the most beloved and revered ruler of the people.

When building the tombs, the signs of the earth, heavenly powers, Vietnamese traditions, etc., were necessarily taken into account. However, each imperial tomb reflected the personality of the buried ruler.

When Thieu Chi built the tomb, his son had to adhere to his father’s will, so it was conveniently planned and uncluttered. It is the only tomb that is not walled.

This unique historical monument is considered a trademark of Hue (Vietnam). The pagoda is located on a low hill on the northern bank of the Aromatic River. It consists of seven tiers, each symbolizing a level of enlightenment of the Buddha. The height of the temple is 21 meters. 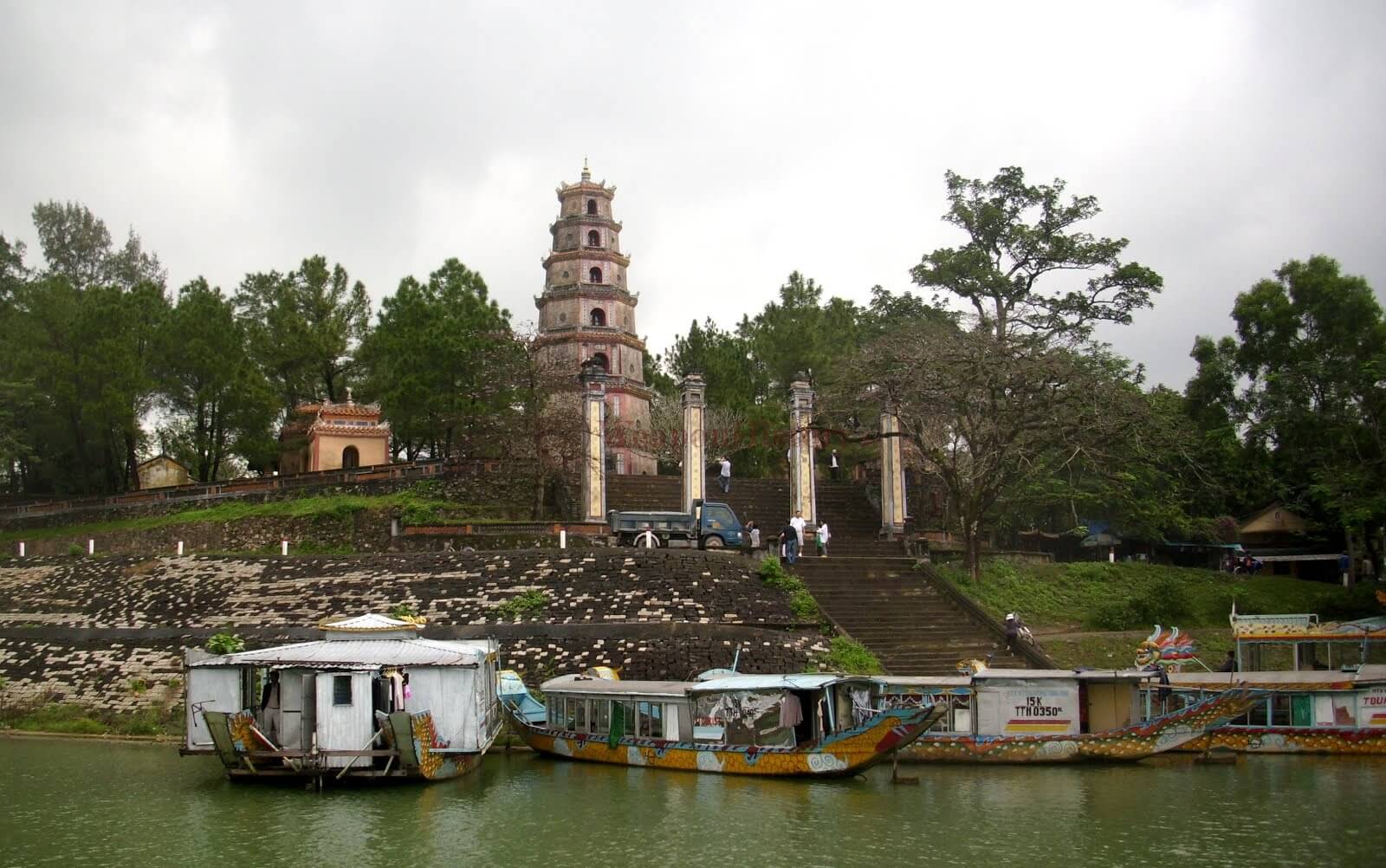 The creation of the pagoda in Hue dates back to the 1600s and is associated with the appearance of the legendary fairy Thienmu. She told the people that Vietnam’s prosperity will start when their ruler, Nguyen Hoang, builds a pagoda. The people were very happy to see the pagoda.

There is a remarkable incident connected with the pagoda. In the 1960s, the authorities wanted to ban Buddhism, which led to public discontent. One monk set himself on fire in protest. Now this car he drove is on display behind the main sanctuary.

Admission to the site is free.

The people of Hue are justly proud of their Truong Tien Bridge, which is mounted on iron piers and is designed to connect the historic part and the modern resort. The bridge is not a historical monument. It was created in 1899 by the famous engineer Eiffel, which made it world famous. The design of the 400-meter bridge was developed taking into account the latest technology of those years. 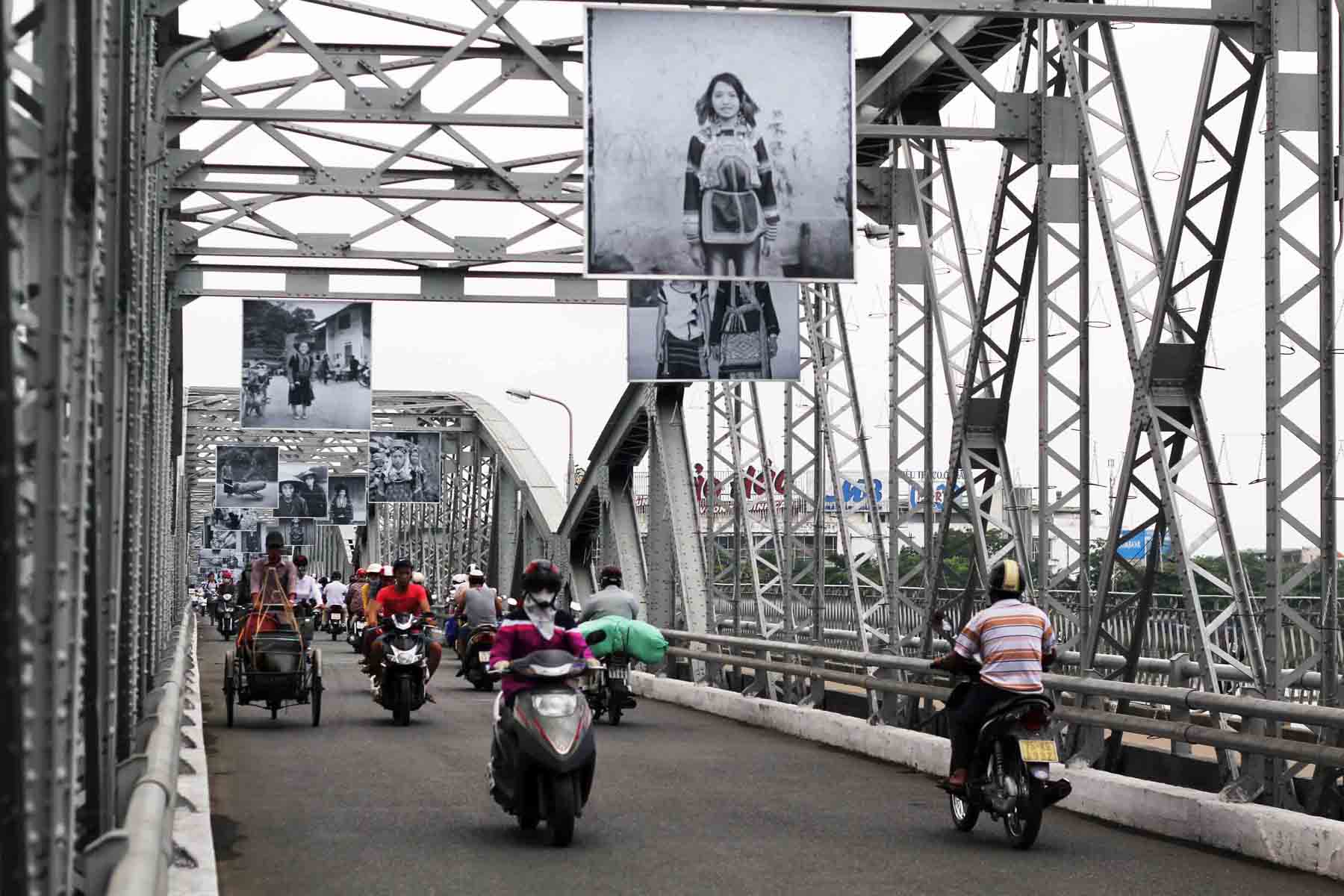 Throughout its existence the Truong Tien Bridge was subjected to the ravages of storms and much damage from American bombing raids. It was not until two decades ago that it was finally rebuilt.

The central part of the bridge is used by cyclists, while the sides are reserved for pedestrians. Of particular interest is Truong Tien in the evening, when the colored lights turn on, repeating the graceful curves of the bridge.

Hue has no access to the sea, so there are no beaches in the city. However, 13 to 15 kilometers away there are several well-equipped beaches on the shores of the South China Sea. One of the most popular is the beach Lang Co, where foreign tourists and locals love to relax. 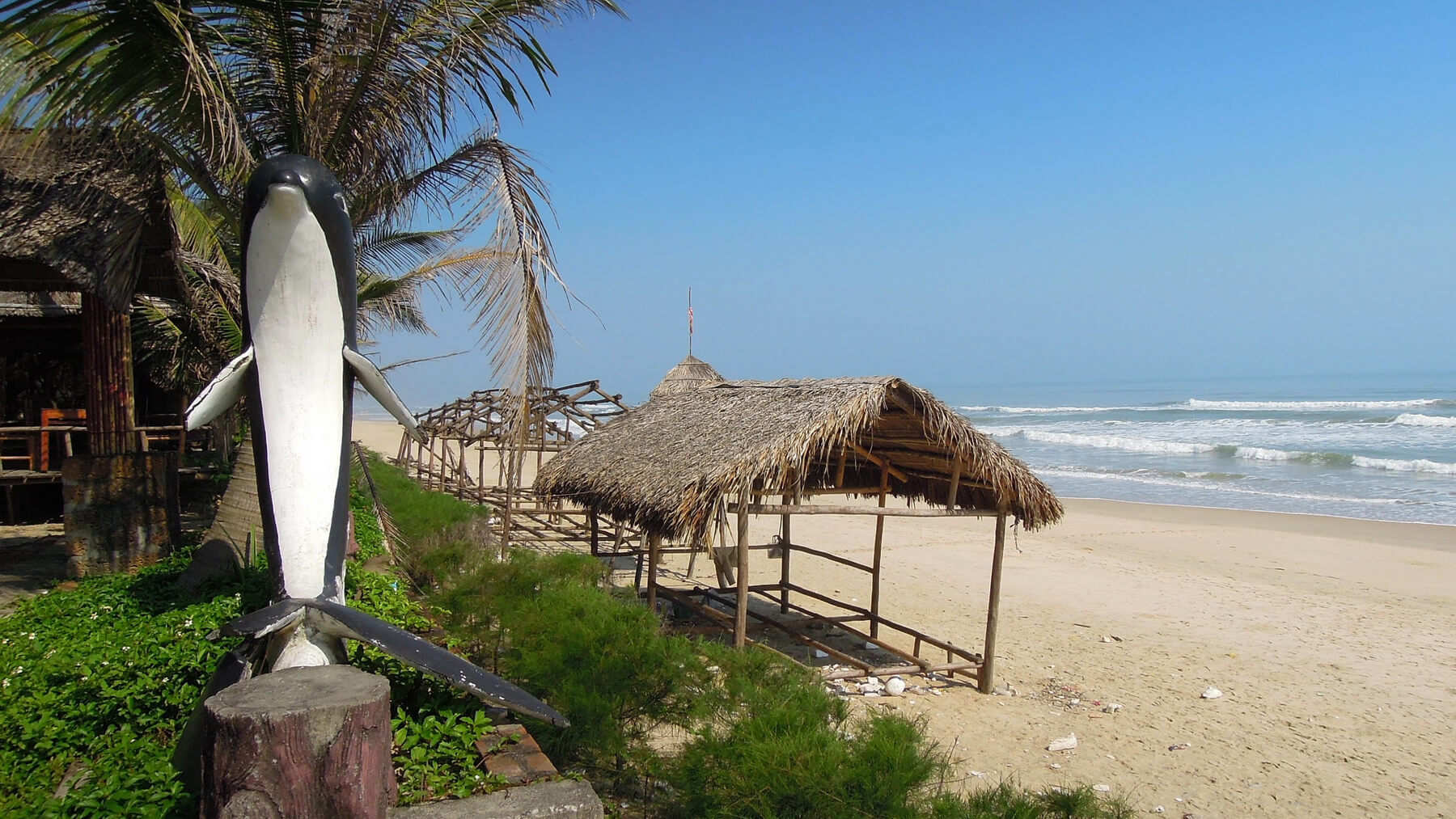 Lang Co beach has white sand and blue waters for 10 kilometers along the coast. Getting to it from Hue is very convenient because the beach stretches along the highway. The road from the beach is separated by a hill, so the noise of motors does not reach here.

Palm thickets and grassy beach umbrellas create a wonderful exotic atmosphere. It is good to rest here with children – the depth is not more than a meter, and the water is always warm. On the coast there are hotels and restaurants, where you can have a good meal. 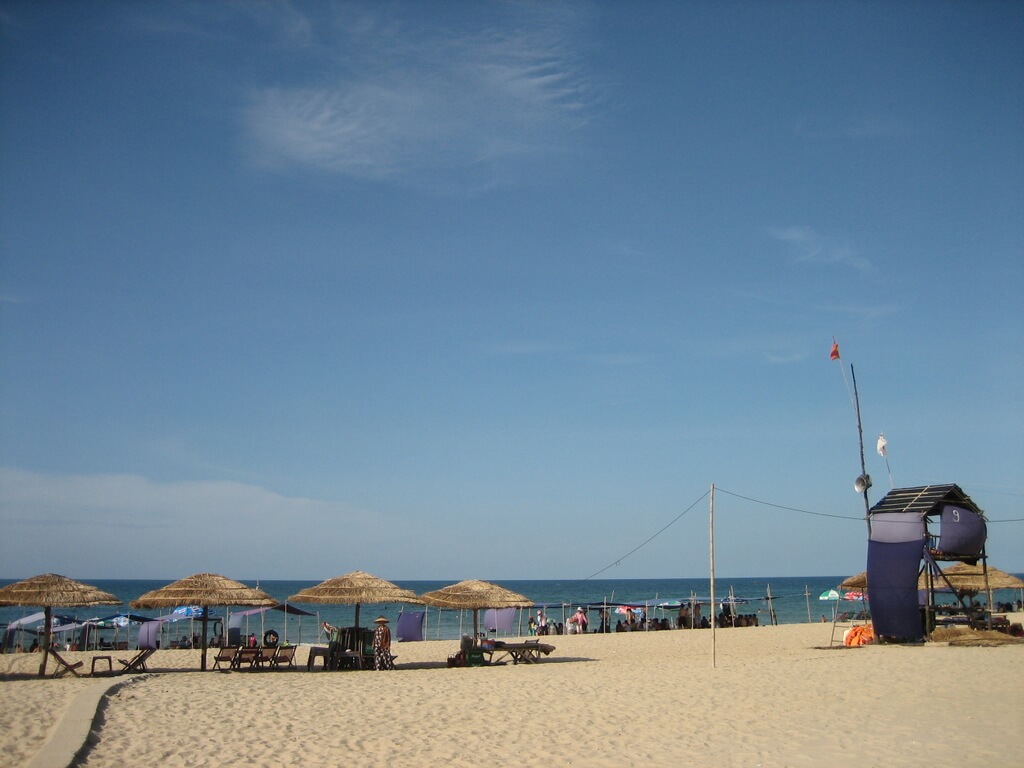 This beach is located near the village of Thuanan (only 13 kilometers from Hue). It is convenient to get here by renting a bike or motorcycle. The beach attracts tourists with its beautiful nature, white sand and turquoise water. Infrastructure is virtually absent, but it is always crowded and fun, especially during holidays and festivals.

In Hue monsoon climate, there are four seasons. Spring is fresh, summer is hot, autumn is warm and mild, and winter is cool and windy. The summer heat reaches 40 degrees Celsius. In winter, the temperature is plus, averaging 20 °C, but can sometimes drop to 10 °C. 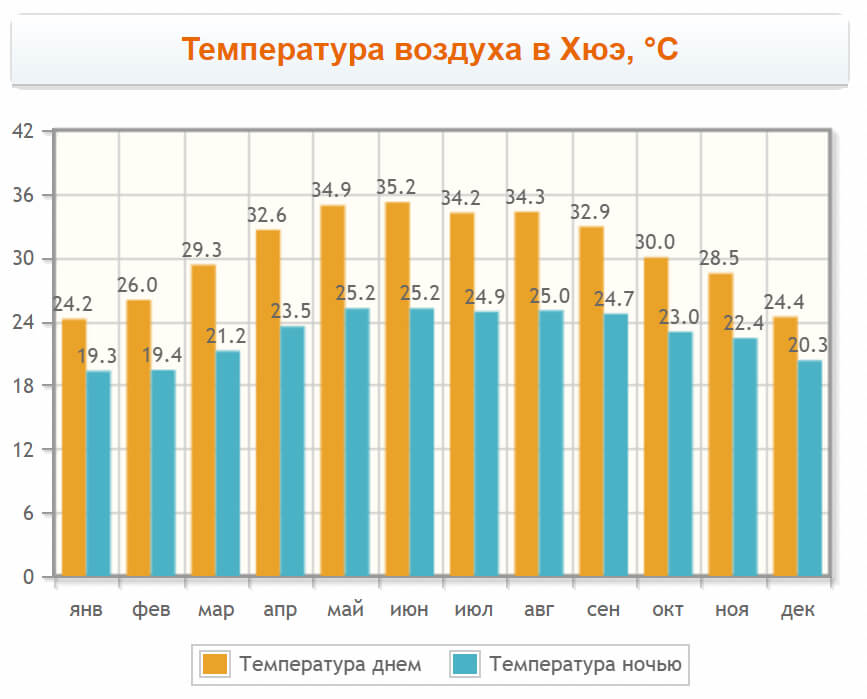 Due to the Seung Cheong Mountains to the south, there are always clouds over Hue, so there are more overcast days than sunny ones. There are often fogs, drizzle, or torrential downpours.

The dry season in this part of Vietnam lasts from January to August. The most comfortable temperature is in January and March (22-25 ° C), although at night it can be cold (below 10 ° C). The hottest time in Hue is June and August (temperatures of +30°C and above).

The rainy season begins in late August and lasts until the end of January. It rains the most in September and December. During this time, puddles on the roads do not dry out and are constantly wet.

The best time to go to Hue is from February to April, when it is not so hot and it rarely rains.

Going on a trip to Hue, Vietnam, you will see a lot of interesting things. In addition to the listed attractions, be sure to visit the national park Bachma, at hot springs with mineral water, to see with my own eyes amazing Aromatic River. And if you come here in June, you can take part in the colorful celebrations and large-scale costume parades.

A walk through the sights of Hue and useful information for tourists in Vietnam – in this video.

Updated: 2 Sep, 2021 One of the most romantic places of the Adriatic coast is …

Updated: 24 Mar, 2021 The capital of Slovenia Ljubljana is a peaceful and…

Updated: 21 Dec, 2021 The City of Mtskheta in Georgia is one of the most beautiful cities of…

The largest Vietnamese city is located in the south of the country, almost 2 thousand….