Chongqing China – what to see?

Chongqing is one of the largest cities in China. An industrial center, it develops and grows at a surprisingly fast pace. Businessmen come here to realize their plans, and tourists are attracted by its modern architecture, huge skyscrapers, as well as Buddhist temples and other cultural attractions. 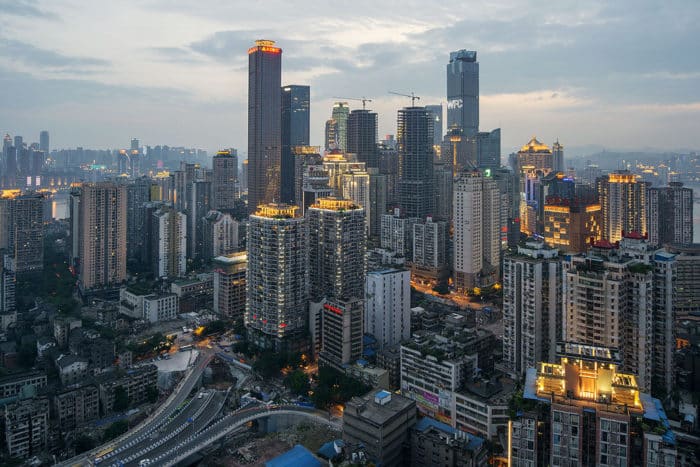 Chongqing was built on the banks of the vast Yangtze River (which means “long river”). The terrain in this region is hilly. There are also small mountains in the city, the height of which is not more than 500 meters above sea level. On three sides of the metropolis is surrounded by mountain ranges, so the area where Chongqing is located, got its name “mountain city.

The Yangtze is not the only river flowing through the city. There are dozens of rivers in the city, including such rivers as Qijiang, Fujiang, Wujiang, Daninghe, and Jialingjiang. The city’s waterfronts are one of the most popular places for visitors to walk.

According to the 2017 census, Chongqing is home to more than 30 million people, covering more than 82,000 square kilometers.

Interesting fact: The ethnic majority in the city is made up of the Han people, the most numerous people in the world, who are usually equated with the concept of “Chinese. However, China is a multinational country and members of other Chinese nationalities (Miao, Tujia and others) also live in Chongqing. 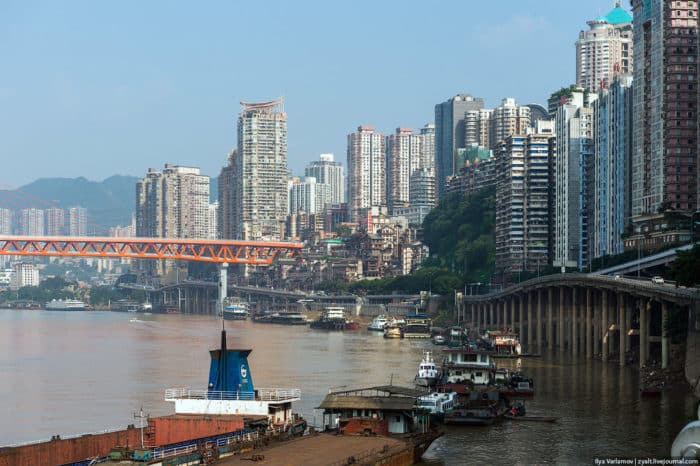 Chongqing is larger than Lithuania or Latvia. The size of the city is comparable to many small European countries. The pace of construction is so enormous, that every year the area of Chongqing gets closer and closer to the size of an entire country.

The modern metropolis grew up on the site of a small port city, which received city status less than 90 years ago. The growth and development has contributed to the fact that during the war with Japan, the capital of the Republic of China was temporarily moved to Chongqing. Despite the constant bombing by Japanese aircraft, the first impetus was given, thanks to which the city began an active industrial construction. The construction of a huge dam which developed a waterway connection with Chongqing also played a role in Chongqing’s development.

The many bodies of water near Chongqing made it possible for the inhabitants of neighboring villages to farm successfully. Farming was also aided by the special climatic conditions:

Also in China, Chongqing is famous for its dense fog. Although fog often forms because the city is located in a mountainous area, you should be cautious about such a phenomenon – it is likely that the haze was caused by the emission of harmful substances into the air by industrial plants. If the fog occurs, it is better to return to the hotel or go into another room for a while so that the smoke does not harm your health.

The tourist season in the city lasts from April to October, when weather conditions are most favorable and are suitable for strolling through the many attractions and shopping areas.

An interesting fact: the warm summer rains that fall at night in Chongqing have found numerous reflections in Chinese poetry.

Due to the industrial activity the city’s rivers are not suitable for swimming. This can be compensated for by SPAs, swimming pools, and recreational complexes, which are represented for every taste in the megalopolis. Tourists give high marks to such SPA centers as Chongqing Nanwenquan Park and Banyan Tree Spa Chongqing Beibei. For a beach vacation, it is better to go to another city in China. A visit to the island of Hainan with regular flights from Chongqing would be a good choice. 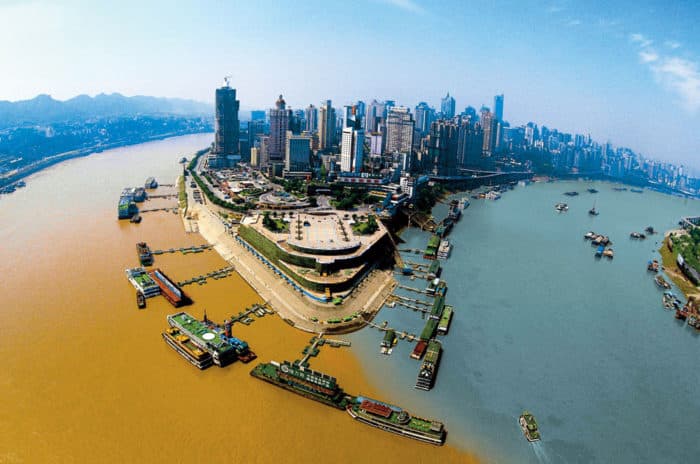 Human exploration of the lands where one of the largest and most modern Chinese cities, Chongqing, is located today began in ancient times. In the places where Chongqing was built there once stood the main city of the Ba Kingdom. The prefecture of the same name, under the control of the Chinese imperial dynasty of Qin, would be formed in the third century B.C.

The Ba prefecture would gradually expand and establish itself. This would lead to Ba becoming a separate province for four centuries, from the sixth to the tenth century AD, and with it a new name, Yu.

Later the province would be renamed again. The new name of the region would be Gong. The territory of this province in the twelfth century would be inherited by a member of the Song imperial dynasty, who would be titled Gong-wan. The motto chosen by the ruler for the duration of his principality would be “Guan-tsung,” literally meaning “twice ordained. As a result, the city where Guangwang ruled would be called Chongqing – “twice celebrated.

As it developed, Chongqing became one of the important trading points through which merchant caravans passed. Closer to the twentieth century, Chongqing became a port city, which led to the opening of a customs office in the city, and infrastructure development began. 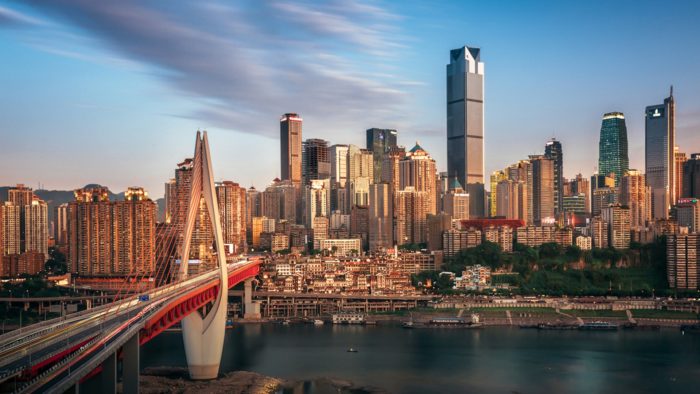 After becoming a city, Chongqing’s growth rate increases. During the war it serves as the capital, and although later the government offices are returned to Nanjing, Chongqing is assigned the status of special state importance.

The great leap in the city’s development comes after the rapid development of the river industry in the Yangtze River basin, and after the seat of government in Chongqing for the duration of the war. The incredible pace of development led to the fact that today Chongqing is one of the largest industrial megacities in the whole world.

Interesting fact: In the 1980s, China began experimental reforms in the economy, and the list of cities chosen for the experiment includes Chongqing.

In the city there are entire streets dedicated to retail outlets. On them you can find both small souvenir stalls and huge shopping malls. The most popular shopping streets for tourists are Nanping and Yangjiaping. Visitors from all over the world are also attracted by the huge city market. On it you can find a variety of real Chinese tea, which is grown not far from the city.

Interesting fact: one of the regions where tea cultivation began was Chongqing. 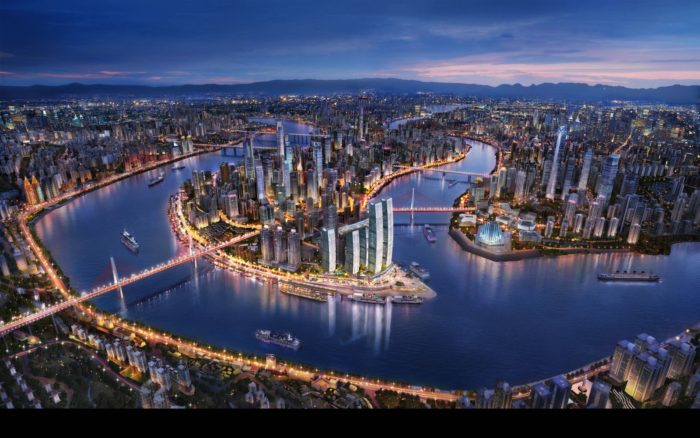 Chongqing on a map of China

To the east the city borders the territories of Hubei and Hunan. Sichuan borders it from the west, Guizhou from the south, and the northern part is bordered by Shaanxi Province.

The city has an excellent infrastructure. All points of the metropolis are connected by modern highways with convenient interchanges. There are a large number of buses, but for tourists who do not speak Chinese it is a problem to get around the city that way – all the signs in the buses are in Chinese. It is more convenient to use the subway, which is more than 200 kilometers long.

Chongqing International Airport is a little more than 20 kilometers from the city. There are domestic flights to Chongqing from almost every major city in China (the exception is Hot Hot Hot in Inner Mongolia). There are also developed air links with other Asian countries.

You can also get to the city by rail. Travel time from Beijing to Chongqing is 25 hours. Intercity buses run between Chongqing and Beijing. You can also take a river transport that runs between cities on the Yangtze River. Many Chinese river cruises include a visit to Chongqing.

How to travel in Chongqing?

There are a variety of ways to get around the city: 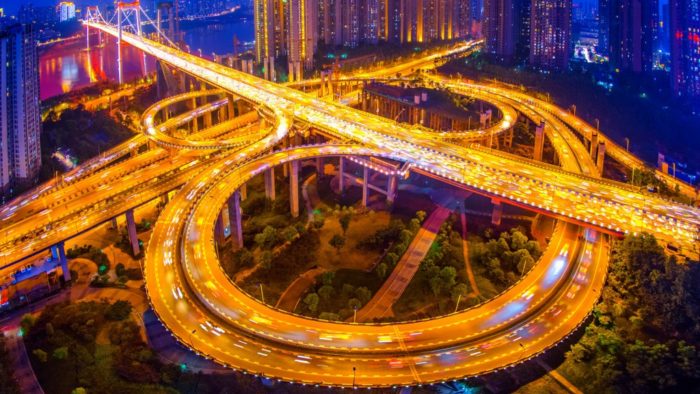 One of the most visited tourist spots near Chongqing is the Dazzu complex of rock-cut bas-reliefs. These stone sculptures are the greatest cultural heritage of ancient China and the center of Buddhist pilgrimage.

READ
The most prosperous cities in the world

The images and sculptures are located in different parts of Dazzu County. In total, there are more than 60 thousand ancient statues. The main clusters are in Baodingshan, Yungan, Duhuang and Fowan. Among the sculptures are statues of Buddha, monuments to emperors, images of officials and ordinary people.

It takes two hours to reach the caves from Chongqing. There are regular buses to Dazzu from the bus station. 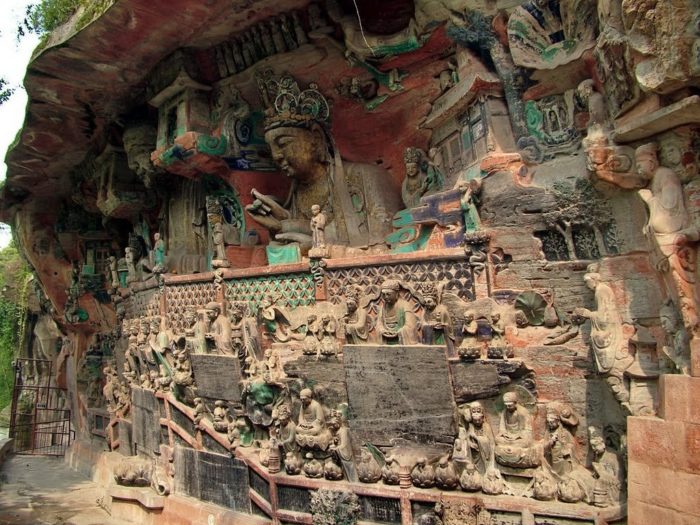 The park’s location on the Elin Ridge affords its visitors a great vantage point of the city. The park was originally part of the personal property of a wealthy Chongqing resident. Today, the park is home to a botanical garden featuring hundreds of rare and unusual plants. The park is well suited for a leisurely stroll, which is worth setting aside a day for. 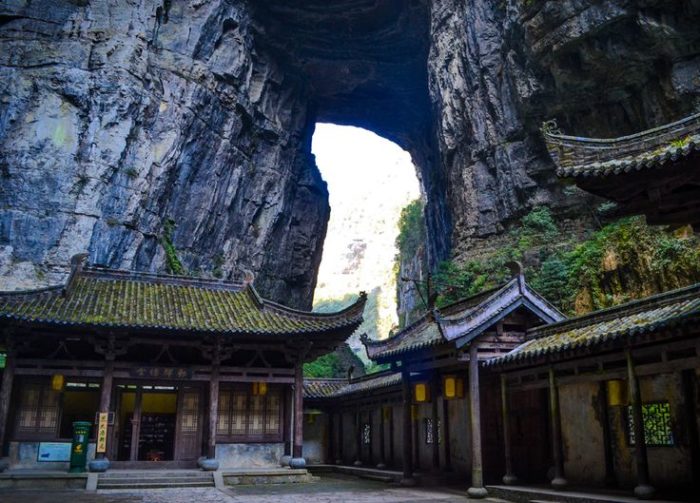 Eight kilometers from the city center there is a zoo, one of the National Parks of China. In the zoo you can see many red-listed species of fauna as well as rare species of fish. Among the rarest animals in the zoo is the southern Chinese tiger – there are about 20 representatives of this species in the world.

The zoo also hosts entertainment programs for children and adults. Animals take part in the show. Admission fees range from 20 to 30 yuan, younger children and senior citizens are eligible for discounted admission. 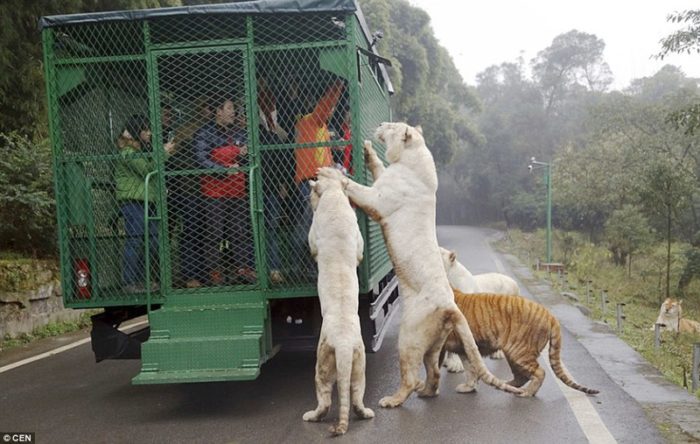 Chaotianmen Square means “open heaven” in translation. It is the central point of the city near where the two rivers meet. Here you can also buy a ticket for a river walk to admire the lights of the metropolis from the water.

Tourists love to stroll around the square. The most suitable season for being outdoors is late summer and early fall. 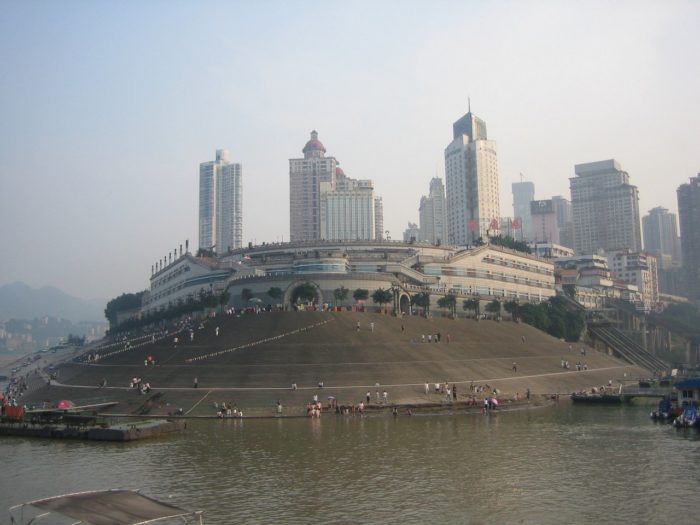 Three Gorges on the Yangtze River

A uniquely beautiful stretch of the great Chinese river can be seen in many works of cinema. It is now home to the spectacularly large Sanshia Hydropower Plant (the name means “Three Gorges”). It is the most expensive hydroelectric power plant to date, the construction of which has caused much controversy.

The construction of the dam required the relocation of almost 1.5 million people. It paid off by providing electricity to a large part of China. The dam was also able to keep the water flowing during the 2010 flood, when the water level broke a record.

READ
Big Ben is the calling card of London, England 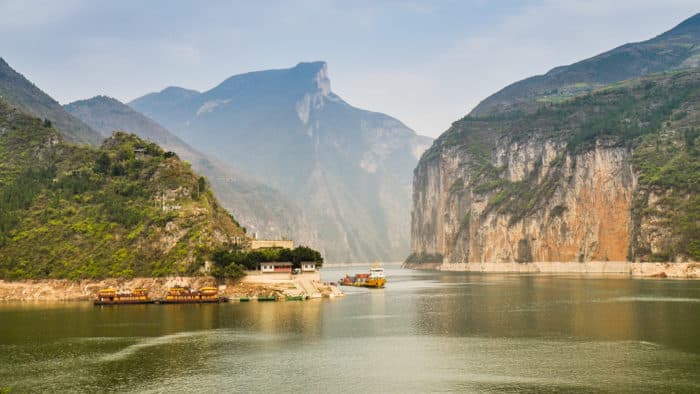 Although there is a common perception in Russia that Chongqing is a gloomy industrial center with a bad environment, numerous photos and tourist reviews that can be found on the Internet completely disprove it. Here are some of those reviews: 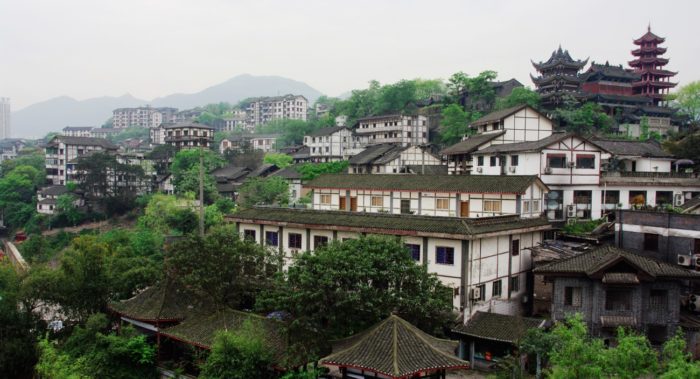 Tourists from Russia unfairly neglect Chongqing when they travel to China. The city is growing so fast that more facilities are built in one year than in Moscow in 15 years. If you want to see the industrial wonder and bizarre architecture of the future, then you should definitely include a visit to Chongqing in your trip.

One or two days is not enough to see the city. It is better to come in the warm season, when you can go for an evening stroll along the rivers and visit the stone complex in Da Zu. The lights of the huge skyscrapers, shimmering in the dark, will remind you of megalopolises from science-fiction movies. Also Chongqing will please you with an abundance of outlets, where it is easy to find an unusual souvenir to remember about China.