The 7 most beautiful train stations in the world 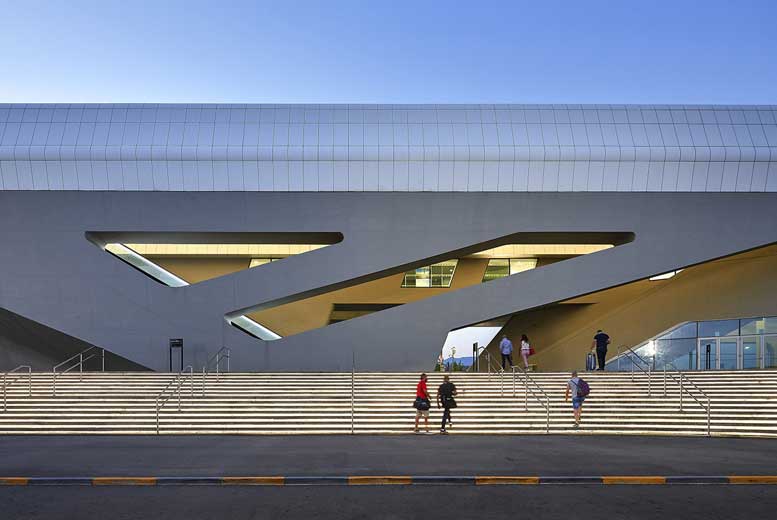 All in all, watch and enjoy – seven of the most picturesque train stations in the entire world. 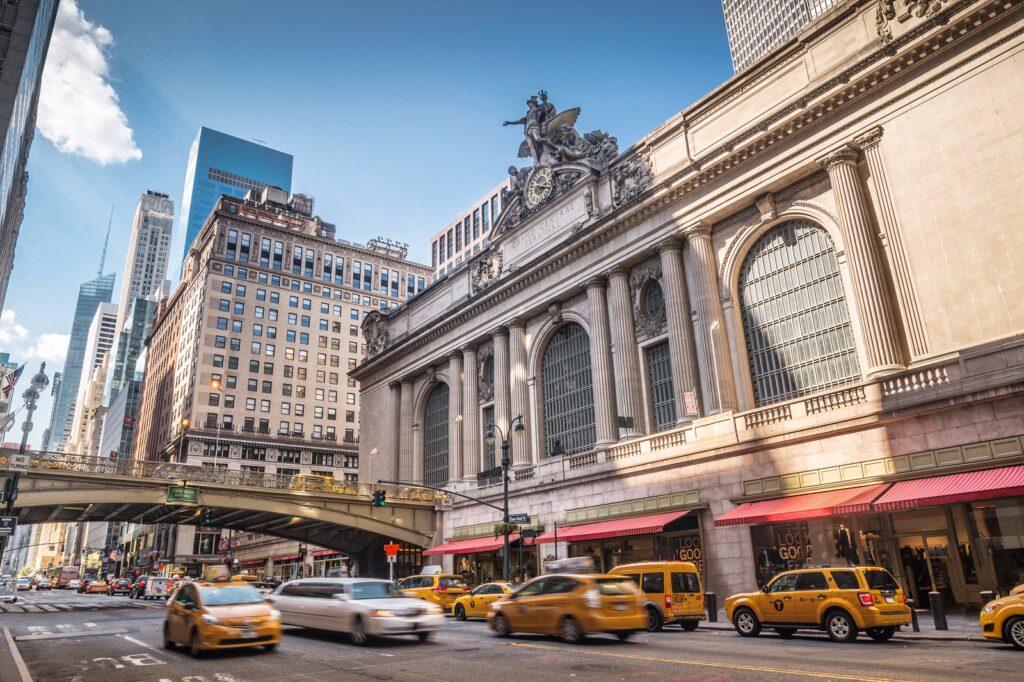 The lobby with twelve constellations on the ceiling, the beautiful windows and the staircase, which can be recognized from many movies and books, has come to life. The bustle of passengers passing by, couples greeting or saying goodbye to each other. The Oyster Bar on Central Avenue is a beautiful restaurant with a curved brick roof that is part of history.

Like the gleaming bronze bell next to the information kiosk, it has been appraised by auction houses to the tune of $10 to $20 million. 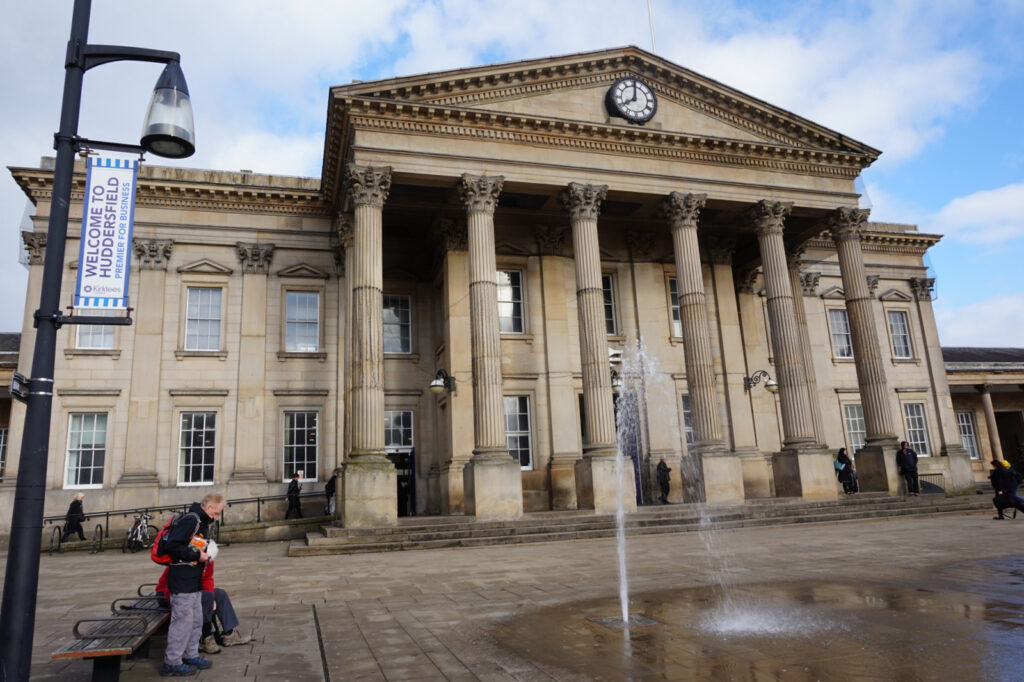 When you first see a picture of the Huddersfield Railway Station, you see a magnificent mansion in front of you. The station opened in 1847 and is now the second busiest station in West Yorkshire after Leeds. The station building was built in the neoclassical style and is a Grade I historic building.

The elegant sandstone facade has been described by poet John Betjeman as “the most stately facade in England,” and a statue of former Prime Minister Harold Wilson stands in the large pedestrian plaza in front of the main entrance, looking as if he rushed here. Inside, you’ll find not only many historical details, but also two decent pubs, The Head of Steam and King’s Head. 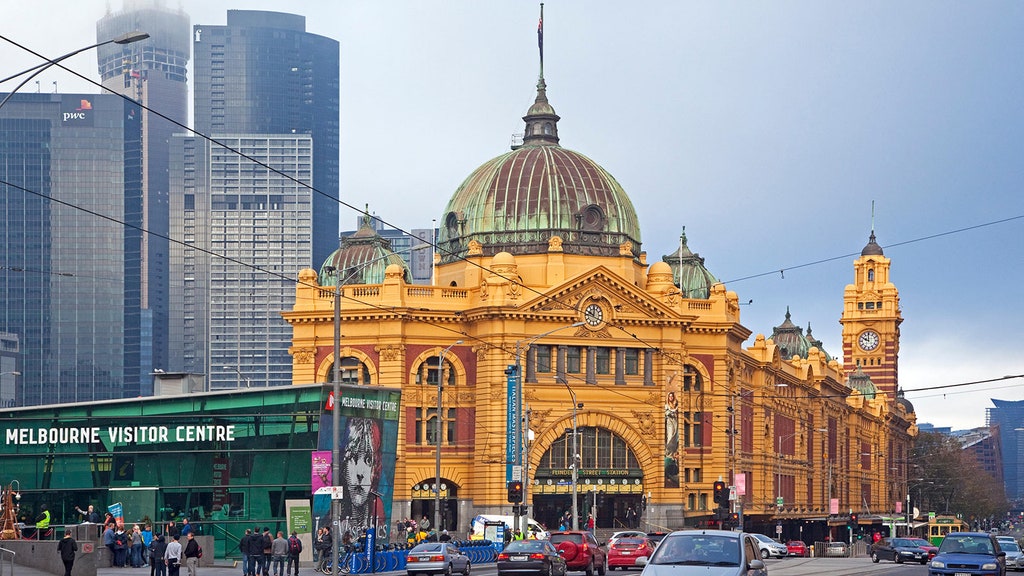 This indication does not need additional description, as all locals know that it refers to the 13 bells decorating the entrance to the main building of the station. The bells do not show the world time, but the departure times of the 13 suburban trains leaving the station.

Inside the station on the third floor is a large ballroom that used to be used for concerts, dance classes and competitions and was once Melbourne’s most popular ballroom. It was abandoned in the early 1980s, but has recently been restored and renovated. 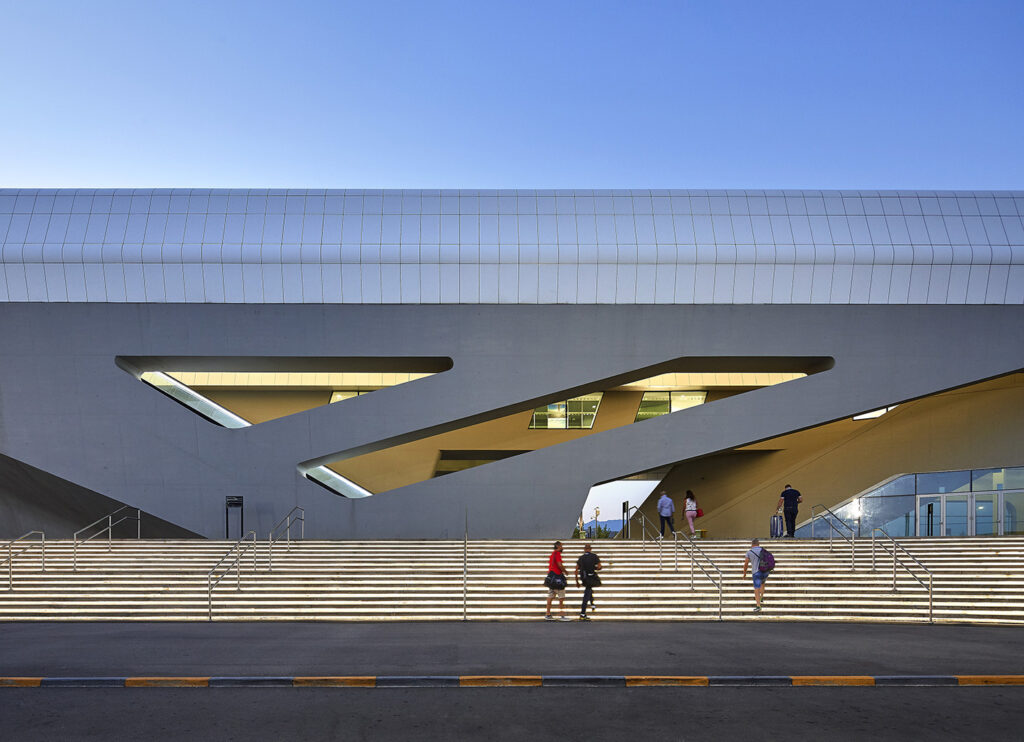 Naples railway station is the gateway to southern Italy. From afar, this ultra-modern train station looks like a spaceship that has landed in a green landscape. Up close, the play of lines, light and shadows is mesmerizing: the station makes its way to the high-speed railroad through several floors shrouded in light.

This incredibly modern building sits next to a Mycenaean village dating back to 1500 B.C., an ancient one that was excavated when the station’s foundation stone was laid in 2003. The station was finally opened in 2017. 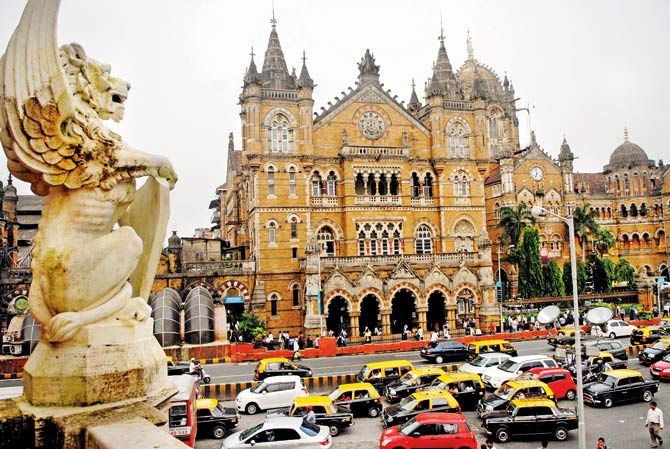 It has been designated a UNESCO World Heritage Site. The railway station is an integral part of Mumbai, and over 3 million passengers pass through its halls every day. Every day! 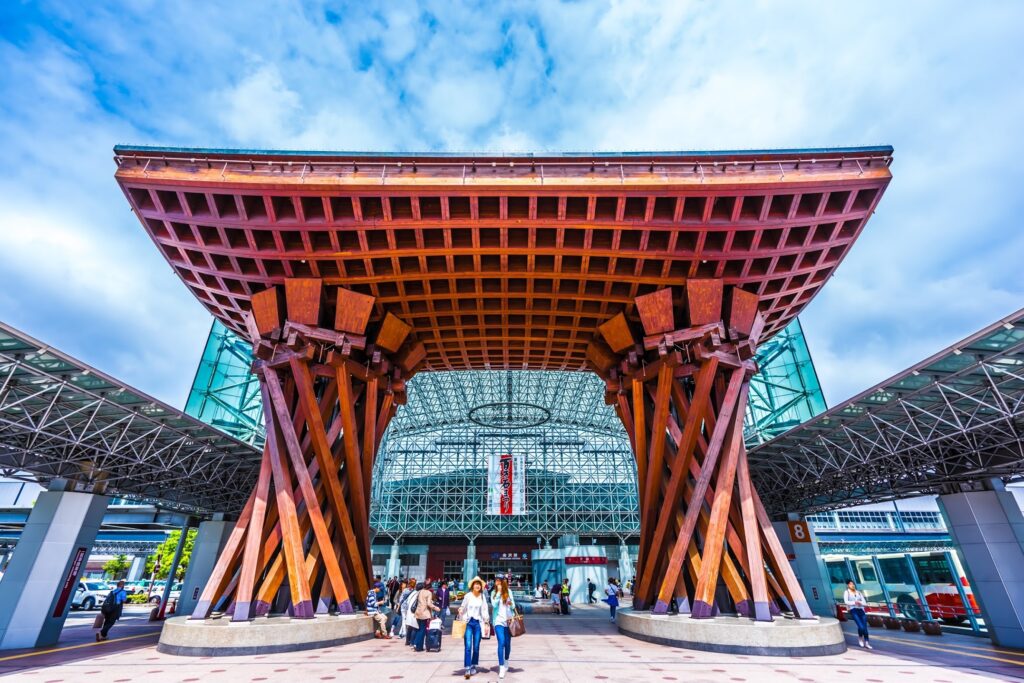 When you first see Kanazawa Station, with its domed glass and steel roof and impressive gates leading to the entrance, built entirely of Japanese cypress and adorned with traditional Tsuzumi drums, you might not believe that the station was originally built in 1898. The old station that stood on this spot is long gone, replaced by a modern version, but it has great symbolic significance and deserves closer attention. For example, the pillars on the platform have gold bases, showing that Kanazawa supplied 99% of Japan’s gold leaf.

In addition, there are 24 wooden columns along the hall, each inlaid with lacquer or porcelain, representing the city’s cultural and artistic heritage. 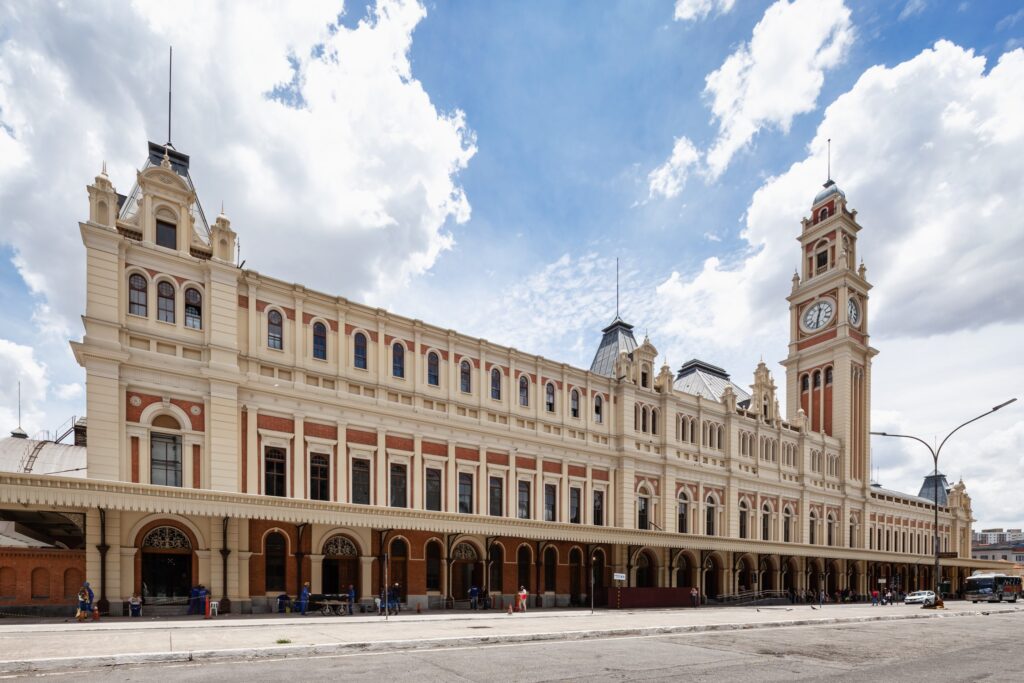 The current station building is reminiscent of an earlier structure from 1901, which was designed and erected in Glasgow, Scotland. Workers assembled the entire structure in Glasgow, then disassembled it, moved it to São Paulo, and reassembled it in its new location. The clock tower once dominated the skyline of St. Paul and showed the world the coffee wealth of the city.

Dear Friends, subscribe to our vKontakte group where we publish the most interesting and useful articles.

7 most impressive railway stations in the world

The word “railway station” evokes extremely negative associations for an average Russian. Meanwhile in many cities around the world train stations are not only full-fledged public spaces with good restaurants, gardens and even nightclubs, but also real works of art. I have chosen the most interesting of them. Atocha is not only the largest but also the oldest station in Spain. The first building of the station was built by 1851 by order of Queen Isabella II. After 40 years, the station survived a major fire, was reconstructed and reopened in 1892. One of the architects of the station building at the time was none other than Gustave Eiffel, the author of the famous tower in Paris. Exactly 100 years later, in 1992, saw the light of day modern station Atocha. The building is a two stone pavilions, connected by a ceiling of glass and iron, under which the railroad tracks of 24 pieces are located. Particular attention should be paid to the old part of the station, which houses a botanical garden with more than 7000 plants, 550 species of animals and birds. Also on the territory of the botanical garden is a small pond with fish and turtles. In addition, for the convenience of passengers here are concentrated stores, cafes and there is even a nightclub. The history of this train station begins in 1842, seven years after the appearance of the first railroad in Europe. In 1958 it was completely rebuilt according to the most modern standards of the time. The station lasted in this form until 2009, when the new building in question was put into operation. The inauguration of the renovated Liège-Guillemain, designed by Santiago Calatrava, was accompanied by a fireworks show reminiscent of the opening of the Olympics or the FIFA World Cup. Five platforms and nine railroad tracks cover a 200-meter-high glass dome 35 meters high. From the outside it seems that the huge construction literally hangs in the air. The capacity of the station is about 36,000 people. Liège-Guillemain is one of the few European train stations directly connected to the freeway network, so buses stop there as well. In addition to domestic trains, the station also connects Liège with Paris, Aachen, Cologne, and Frankfurt. The construction cost $312 million.

READ
12 places in Sardinia that are worth seeing. Italy The Chhatrapati Shivaji Indian Railway Station building is a UNESCO World Heritage Site and took 10 years to build. The building was designed by Frederick Stephens and was originally named after Queen Victoria, but was renamed in 1996 after the Indian national hero Chhatrapati Shivaji, and the statue of Queen Victoria under the central dome was dismantled. In his work, for which Stevens received only 1,600,000 rupees (about $27,000), the architect used a mix of traditional Victorian architecture and Indo-Saracenic architecture. There are 18 railroad tracks, seven of which are used by trains serving national destinations, while the rest are used by long-distance trains. The station is also equipped with a small hotel with 78 beds. The current La Gare station in French Strasbourg from the outside is nothing but a huge glass dome, but inside everything is much more interesting. The fact is that it was decided to keep the old building of the station built back in 1883. The first Strasbourg train station was built in 1854, and then it was demolished, rebuilt and reconstructed, completely replacing the original train station. In the 19th century the station was not only a passenger station, but was also a freight-sorting station. In 2006, in addition to connecting the station to the TGV high-speed train network, it was decided to reconstruct the old station building. For almost two years, 300 workers toiled here daily to erect a huge glass dome above La Gare weighing 900 tons and costing 150 million euros. The station is also equipped with the largest computerized system in France, for the connection of which it was necessary to stop traffic at the station for 30 hours. The station square has also been reconstructed: there is now, among other things, a bicycle parking for 850 places. All these innovations were not in vain – today the station serves 60,000 passengers daily. This station in the Japanese city of Kanazawa is the oldest station in the country – for the first time it received passengers back in 1851. The station as we can see it today was opened in 2005. Its architectural appearance caused mixed reaction among local residents who thought that such a mixture of traditional Japanese architecture and futuristic design looks ugly. But tourists thought otherwise, so Kanazawa Station in a very short time became very popular among foreigners. As in any Japanese building, it had to solve the problem of space saving, so the platforms, of which there are seven in the station, are located on different levels – one under the other. The main gate of the station is made of hand-turned wood, and under the glass roof, in addition to waiting rooms, ticket offices, storage rooms and railway platforms, there is a small garden with traditional plants and many fountains. The modern station replaced the Kuibyshev station, which served for 120 years. Today it is a large building with a facade made of glass; its height is 100 meters and its area is more than 32,000 square meters. Samara station has 12 tracks, five platforms, as well as two comfortable waiting rooms, equipped with computers and office equipment, comfortable furniture and a winter garden with a fountain. The station also has an observation deck at the height of 95 meters, and the Samara station itself is one of the highest in Europe. In addition, it is planned to build the second part of the station, which should contain a hotel, a shopping or business center and a multi-level parking lot. For the convenience of passengers is also planned to integrate the station into the urban subway system: passengers metro station “Vokzalnaya” will get directly to the building of the station. Tourists often confuse this station with a museum or theater building. Because of its facade, which is minimal compared to the other train stations in this list, and its architectural appearance, preserved unchanged since the end of the XIX century. Rosio is not only a work of art, but also a complex engineering structure. So that the railroad tracks running through the city center did not interfere with car traffic, a 2,600-meter long tunnel was dug through which trains now move. Rosio was the city’s main station until 1957, but now it only serves suburban destinations.