Slopes for skiers and snowboarders of all levels, specialized slopes for freestyle and mogul skiers. Ideal skiing conditions for beginners: the ski school in Les Arcs is considered the best in France, many easy slopes.

The resort of La Plagne lies at an altitude of 1250-3250 meters, and the ski area includes 4 alpine villages: Em, Bellentre, Champagne-en-Vanoise and Mako la Plagne. In La Plagne, there are 225 km of pistes of varying degrees of difficulty: 18 black, 33 red, 69 blue and 10 green.

The main ski area above the Arches “1600” and “1800” – slopes of the top of the Aiguille Grieve. There is a whole network of trails of all categories of complexity. Fans of difficult slopes can head to the slope of Aiguille Rouge.

Black slope in Villaroge is considered a record in Europe on the height difference (about 2000 m). It reaches 16 km in length. And right on the northern slope of the peak is the famous Flying Kilometre, where absolute speed records have been set.

The most difficult in La Plagne is the 15 km-long direct descent from the Bellecote Glacier to the village of Monchavin below. The altitude difference here is 2 km. 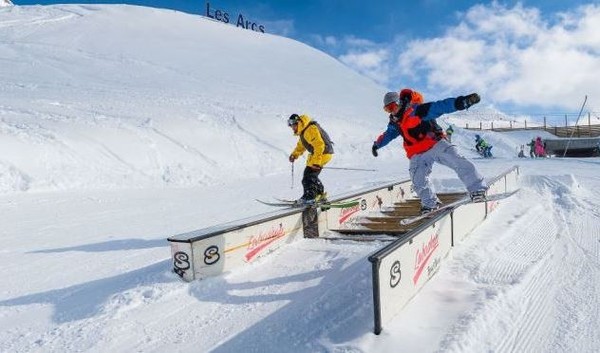 Park skiing. Snowboard, new-school, freestyle Snowpark with bigair and halfpipe at the elevator Col de Forcle (La Plagne). Freestyle Park Initiation for learning is in Montalbere. Bordercross at Belle Plagne . The snowpark at Montchavin-Les Coches . It is possible to ride off pistes with a guide-instructor. This pleasure will cost 65 euros a day. The famous Apocalypse Parc is located on the slope of Arpette in the center of the ski area between Arc 1600 and Arc 1800 (fanboxes, pyramids, halfpipe, rails). Arc 2000 has pistes for bordercross: for advanced skiers and beginners, and a halfpipe (180m), which is illuminated until 20.00 and on Tuesdays until 22.00. Two glaciers that offer skiing: Glacier de la Chiaupe, on the Bellecote slopes above La Plagne, and Glacier Varet, on the slopes of the Aiguille Rouge, above Les Arcs.