In the footsteps of Sherlock Holmes 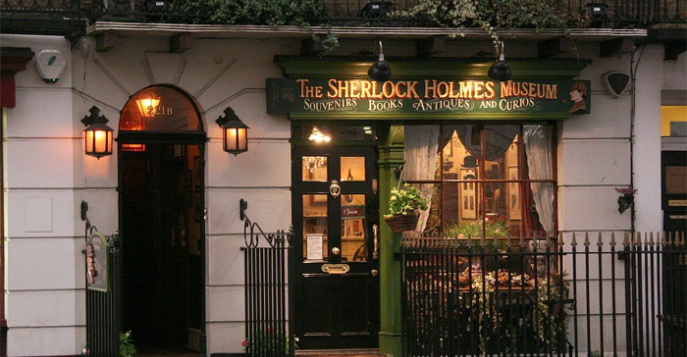 Sherlock Holmes is the most famous private investigator in the history of literature. One in five Britons, according to a recent survey, believes Holmes is a real-life figure. Could this be the case? Conduct your own investigation following in the footsteps of the genius detective! You’ll visit the home of Holmes and Watson in Baker Street, the detective’s favorite restaurants, and other places in London where the stories and novels of Arthur Conan Doyle took place.

In the footsteps of Sherlock Holmes

Arrival in London, transfer from the airport, accommodation in the five-star hotel The Langham.

In the evening, dinner at “Simpson’s in the Strand,” a traditional English restaurant often visited by Sherlock Holmes and Dr. Watson. According to the stories of Conan Doyle, they loved to sit at a small table and look out the window, watching the flow of life on the Strand.

After breakfast at the hotel, your introduction to Private Investigator’s London will begin. You will visit the Royal Cafe on Regent St., where the scoundrels who attacked Sherlock Holmes in one of the stories hid, see the house on Queen Anne St., where Dr. Watson had his apartment, and walk along the crossroads of Welbeck St. and Bentinck St., mentioned in “The Last Case of Holmes”. You will then tour the famous “Empty House” on Baker St., the Rubens Restaurant, the Sherlock Holmes Hotel and the monument to the great detective. 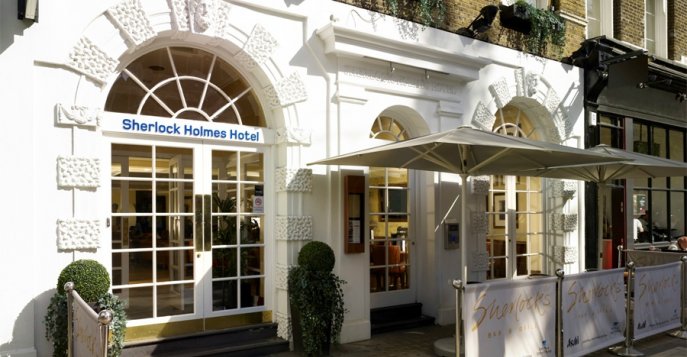 If you go around the memorable places, you have to visit the “Sherlock Holmes Museum” located on the famous address – 221-b, Baker St. It is interesting that initially there was no house with this number, but the employees of the organization that is situated in this area got so tired of hearing letters sent by citizens to Sherlock Holmes that the city authorities took pity and gave the building the official postal address – 221b, Baker Street – and there opened the museum of the famous detective. In the museum you can take a tour around the apartment of Sherlock Holmes and Watson, see the household items (the famous violin, hat, pipe, revolver and so on), relax in an armchair in front of the fireplace and buy souvenirs associated with the name of Sherlock Holmes.

The walk ends at Sherlock’s Bar & Grill, one of London’s most interesting pubs. After lunch you will have free time for independent sightseeing.

After breakfast at the hotel, you will continue your exploration of Sherlock Holmes town. Your route will take you to Covent Garden and Lyceum theaters (the detective was a great opera fan), George Harris’s shoe store where Holmes bought his famous pair of shoes, Charing Cross Hotel, former Scotland Yard building, Criterion restaurant and Turkish baths where Sherlock Holmes and Dr. Watson loved to relax. 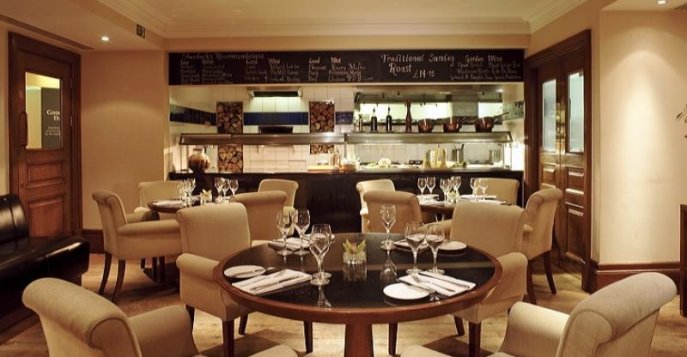 After the walk you will have lunch at the Sherlock Holmes pub, located in the former Northumberland Arms Hotel, where Sir Henry of The Hound of the Baskervilles stayed. In one of the rooms of the pub there is a reconstructed Sherlock Holmes living room, created with the help of Arthur Conan Doyle himself who added a lot of different objects connected with the adventures of Sherlock Holmes to the interior.

Return to the hotel. Free time.

Free day, in the evening – dinner at “Criterion Restaurant”. In the bar of this restaurant Watson met his friend Stamford, who later introduced him to Sherlock Holmes.

After dinner, you’ll attend a performance at the Covent Garden Theater – an opera, musical, or ballet of your choice.

Map and itinerary of Sherlock Holmes in London

Sherlock Holmes, born from the pen of Arthur Conan Doyle, is one of the world’s most recognizable and beloved literary characters.

In the more than one hundred years since the hero’s imaginary life, London has changed dramatically. Witnesses of Sherlock Holmes’s charming and dangerous city – buildings, cultural institutions and commercial establishments that have become part not only of the literary universe, but also an integral, living history of the British capital – remain to this day.

Below is a small overview of Sherlock Holmes’ London. It is roughly divided into two parts. The first includes actual museums, monuments and places dedicated to Sherlock or related to his author. The second, “literary”, will be some of the points of the city described in the novel. Almost all of the locations can be visited on a tour based on the story of the books and movies (suggested at this link).

READ
10 things to do in Cyprus.

Located at 221b Baker Street, the museum is a neat four-story brick house built in 1815. Inside, visitors will find painstakingly recreated interiors filled with antiques and recognizable items from Conan Doyle’s heroes. The living room and the rooms of Sherlock Holmes, Dr. Watson, and Mrs. Hudson are available for viewing. Free photography is allowed, although permission from the museum staff is required to use the furnishings.

There is a souvenir shop with a good range of souvenirs: postcards, small trinkets for memory or quite a substantial gift, for example a hunting hat of Sherlock or a collection of adventures of the detective in English. Tickets are £6 for adults and £4 for children under 16.

Like many other fictional but much-loved characters, Sherlock received a bronze statue on “his” street in 1999. The statue depicts the full-length detective as a tall, thin man in a hunting hat, pensively smoking a pipe. The sculptor is John Doubleday. A great place for a commemorative photo.

The building was once the Northumberland Hotel, where, according to the text, Sir Henry Baskerville rented a room. It closed long ago and today it’s a wonderful pub with traditional English beers and snacks. The Sherlock Holmes sitting room on the second floor has been recreated (based on the famous Marilebone Library collection), access to the exhibits is restricted by glass.

The writer’s first home is on the corner of Montague Place and Bradford Square. The second is a welcoming brick building in South Norwood. A blue circular plaque has been placed on it, telling the story of a prominent tenant.

His first medical practice was centrally located on Weymouth Street, not far from where the characters in the books acted. Perhaps the writer noticed some of them on his daily commute to work.

Historic building in Great Scotland Yard. The center of Sherlock’s London law enforcement life, leaving plenty of work for the brilliant private investigator. There’s talk that a five-star hotel will open in it, but until that happens, you can look for suitable accommodation here.

The famous London Opera, which has an illustrious artistic history since the 18th century, is now one of the most prestigious venues in the world. Holmes is known to have loved Wagner and to have visited it.

Simpson’s in the Strand

The restaurant has been serving Londoners and visitors for a couple of centuries. Holmes and Watson dined here several times, which can be considered a sign of good service given their inquiring minds.

A famous London theater built in the 18th century, an important landmark in British drama. It was here that a secret meeting between Dr. Watson and Miss Morrison was arranged. Anyone can imagine it by assigning as a landmark the third column on the left.

Corner of Welbeck and Bentinck Streets

Sherlock Holmes was the victim of an unfortunate assassination attempt, much to the delight of all readers, when he was almost crushed by a fast moving van pulled by two horses.

An old London Underground station. Banker Alexander Holder came to meet Holmes using the subway. What’s interesting, the modern decoration of the station uses tiles decorated with the characteristic profile of the detective – in a hunting hat and, of course, with a pipe.

A prestigious hotel in central London, opened in 1865 with a rich history of famous guests: writers, aristocrats and the rich. Conan Doyle, who visited Langham, also lodged there several characters – Captain Morstan, the King of Bohemia, Philip Green. The hotel building is a beautiful architectural monument of the Victorian era and is worth a visit.

READ
The capital of southern Mesopotamia is Uruk, Iraq

A luxury hotel cafe in central London which has become even more expensive over the last hundred years. Sherlock Holmes, however, wasn’t treated too well as he was beaten with sticks by two thugs not far from the place and escaped through the back door of the cafe. Luckily it doesn’t happen again and tourists can take a walk without fear.

Beautiful Anglican cathedral in the heart of the city. Site of a not-so-happy wedding between Lord St Seymon and Hattie Doran. Sherlock, though he does not save the marriage, establishes by deduction a true picture of what happened.

In one of the cells Watson kept valuable documents for history – the memoirs of Sherlock Holmes.

An important focal point in Sherlock’s world, the characters of various works (primarily Holmes and Watson) regularly find themselves here, arriving, leaving, meeting and having other adventures. Sherlock, for example, had his left fang knocked out here in the waiting room.

This hospital was chosen by Conan Doyle as James Mortimer’s place of work. It’s also where Sherlock was given the care he needed after a treacherous attack near the Cafe Royale.

Address : at the corner of the Strand, William IV St. and Agar St.

An old-fashioned bar and restaurant with a rich history, tradition and decor. At one of its tables Watson first heard of Sherlock Holmes from his friend Stamford, an event that radically changed the life of the doctor. Sadly, the place is closed.

That concludes our list, if you wish you can book a tour of all the places and with no queue entrance to the Sherlock Museum (offer at this link).