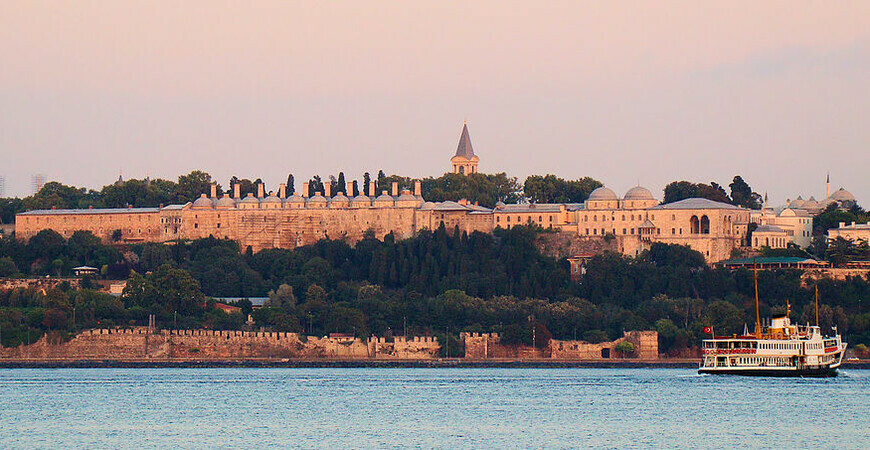 Topkapi Palace was the main residence of the Ottoman kings until the middle of the 19th century. The complex located on the Sarayburnu Cape, surrounded by the waters of the Bosphorus, takes up a large part of the historic center of Istanbul.

The palace and park ensemble built on the site of the Byzantine acropolis is considered to have been founded in 1475. From time to time it was rebuilt, expanded and decorated. Nearly 400 years later, in 1854-55, the Sultan’s court left the medieval palace and moved to the more modern and refined Dolmabahce.

Soon after the establishment of the Turkish Republic in 1923, Topkapı was transformed into a public museum, which became one of the largest in the world by area and the second most visited in Turkey. As part of the historic districts of Istanbul, the palace was included in the list of UNESCO World Heritage Sites in 1985.

The territory of Topkapi is surrounded on all sides by high walls, so the complex is often called a city within a city. Its name is translated as “cannon gate”, which is associated with the tradition of the Padishah’s departure from the residence to the “accompaniment” of cannon shots.

The palace complex covers an area of more than 700,000 m². The number of visitors per year – about 2 million.

The territory of Topkapı Palace is divided into four courtyards and harem. The first two, the Alai Meydany and the Diwan Meydany, were considered external and were intended for communication between the ruler and his subjects. Almost any orthodox resident of the state and foreign guests could enter here. The other two courts – Enderun Awlusu and Sofa-yi Khumayun – were reserved for people close to the Padishah and his servants and guards. The padishah’s private apartments were located here. The harem housed concubines, minions, the sultan’s mother, children and servants.

Yards (avlou) were divided between walls. To get from one to the other can be done in sequence, through the colorful medieval portals.

The Humeyun Babs (gate of the Sultan or Lord) open the way to the first courtyard. They were guarded round the clock by specially trained guards. Inside the courtyard there was a nun’s hospital, living quarters for the “outside” servants, a bakery, a mint, a complaints office, warehouses and outbuildings. The palace was also home to a horse fountain, a tea garden, the “stones of edification” which served as a scaffold, and the hangman’s fountain where blood-stained hands were washed after an execution.

The Alai Meydana was used for solemn ceremonies, meetings with the people and Friday prayers and for the execution of death sentences. The Europeans called this part of Topkapi the court of the Janissaries. The guests of honor of the Emperor had the right to enter the Bab-i Humayun on horseback.

In the first courtyard is one of the earliest Christian basilicas in Constantinople, built in the 4th century. It was considered the main temple of the city until the appearance of St. Sophia Cathedral. The structure has been restored more than once, so many of the unique mosaics have been lost.

After the capture of the city by the Turks, the Church of St. Irene escaped the fate of being turned into a mosque. Until the first half of the 19th century the building was used as an armory. Since 1846 the building had been home to the Archaeological Museum, and then to the Imperial and Military Museum.

The entrance to the second courtyard is the Bab yus Selam (Gates of Welcome), with two tall towers crowned by tents. Inside there is an information point and a police station, and outside is a ticket-checking post. The rooms were formerly used for waiting for audiences, resting for ushers and the executioner. There was a prison in the basement.

READ
Holidays in Albania: the most beautiful places to visit

The gatekeepers were responsible for guarding the entrance and maintaining silence in the second courtyard. Only the ruler was allowed to ride a horse into Bab yus Selam.

Official ceremonies were held in the Divan Meydana, weddings of the sultan’s daughters were celebrated and ambassadors of other countries were received. The main building, the Diwan-yi Humayun, was the seat of the supreme authority, the chancellery and the Diwan treasury. Suleiman I gave the building its splendor by ordering to decorate the interior with gold lattices, bas-reliefs and rich decoration.

Between the second courtyard and the harem are the Araba Kapısı (aka Karet Gate). Another portal – Meyit Kapysy (Gate of the Dead) – served for carrying out the bodies of the dead.

In the Divan Meydana were located:

In the courtyard there is the Beshir Agha Mosque, residential buildings and a hamam for servants.

The third courtyard belongs to the inner space of the palace complex. Entrance here was strictly limited. The private apartments of the kings were located here.

The Babus Saadet Gate leading to the Enderun Awlusu has three names – the White Eunuch Gate, the Bliss Gate and the Audience Gate. The first refers to the guarding of the gates by a unit of white eunuchs, who reported to the chief butler-ceremonial master. They served the sultan’s chambers and the reception area. There were residential outbuildings on either side of the portal.

In the 17th century the gate of the Beatitudes acquired a Rococo appearance. It was crowned with a dome and supplemented with canopies. The threshold was kissed by everyone who was allowed to enter the territory of Enderun Awlusu. At the gate the name of the new ruler was announced, and murdered Ottoman sultans were carried out through it.

The third courtyard housed the most important palace facilities, such as:

At Enderun Awlusu was the Kafes, a place of confinement for potential heirs to the throne, a school for training rulers, and the Alagar Mosque, built for white eunuchs.

The fourth court of Topkapi, like the third, belonged to the private quarters of the Padishah. Here the rulers enjoyed complete solitude and detached themselves from their pressing problems. From the top of the hill one can enjoy the spectacular views of the Gulhane Park and the vastness of the Bosphorus.

In the courtyard one can see the clock tower, the residence of the Sultan’s chief physician, the Sofa Mosque and the “youngest” building Topkapi, which was built in 1840. Today it houses a popular Turkish restaurant “Konyali”.

A separately guarded section of the courtyard was divided into 4 areas – for the Sultan’s mother, concubines, the Padishah himself and the eunuchs. The harem had a total of about three hundred rooms. It had its own hospital, baths and mosques.

Most of the rooms in the Topkapi harem were of modest size and simple decorations. The most luxurious chambers belonged to Hürrem, better known as Roksolana. They are the most visited.

Over 4 centuries, 25 rulers of the Ottoman Empire succeeded to the palace.

Construction of the complex was started by Sultan Mehmed II 22 years after the Turks seized Constantinople. This period is defined in 1475-78.

The most famous in the history of Topkapi is considered to be the greatest of the Ottoman dynasty, Suleiman I the Magnificent. Under him the harem was attached to the palace complex.

The last Sultan who lived in Topkapi was Abdul Majid I. In the middle of XIX century he changed the residence to Dolmabahce.

The palace holds a huge number of treasures collected over several centuries. It is estimated that the number of exhibits on display is 65,000, which corresponds to only 10% of the museum fund.

The most interesting collections are:

Tourists are attracted by the museum halls, their interior decoration and rich decorations in the oriental style.

In addition to the main ones, the museum displays temporary exhibitions. The museum and park complex traditionally hosts various events and festivals dedicated to the history of Topkapi.

It is recommended to allocate a full day to explore the complex. Museum stores sell brochures and guidebooks. But the best option would be to order a tour in Istanbul in Russian.

The price for a visit to the palace complex Topkapi is 200 TRY.

Group discounts at the palace and park complex are not provided. There is no museum card for admission to the Harem and St. Irene’s Cathedral.

Free admission applies to children under 8 years, Turkish citizens under 18 and over 65 years.

Tickets can be paid in cash or by credit card. The ticket office is in the first courtyard, for the Harem in the second courtyard.

Topkapi is open daily, except Tuesdays, May 1 and the first half of days that fall on important religious dates. You can visit the palace and park complex:

It is not allowed to take photos in the exhibition halls. Children with baby carriages are not permitted.

Shorts, miniskirts, tank tops and bare shoulders are not permitted in the Sacred Relics area and St. Irene’s Church.

How to get to Topkapi Palace in Istanbul

The nearest stop of the T1 express tramway is “Gülhane istasyonu”. The first gate is an 8-10 minute walk.

You can walk 1 km from Sirkeci İstasyonu Station of the Marmaray Line to Topkapı or take the T1 streetcar.

Bus No. BN1 goes to the Akbıyık stop on Kennedy Cd. promenade. Timetables and route maps can be found here.