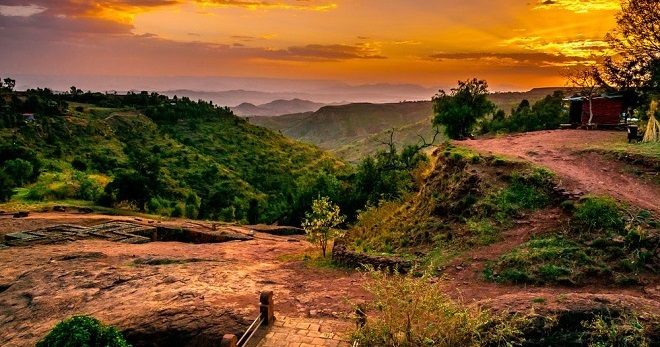 Ethiopia is not the most favorable country for tourism, but there is also something to see. Its rich historical heritage draws people from all over the world. Ethiopia’s natural attractions are depicted in many photos, both in popular science magazines and travel blogs. If you’re curious about how and what the oldest state on the African continent lives on, then don’t hesitate: arm yourself with a list of the most significant places and hit the road.

Ethiopia is not the most favorable country for tourism, but there is also something to see. Its rich historical heritage draws people from all over the world. Ethiopia’s natural attractions are depicted in many photos, both in popular science magazines and travel blogs. If you’re curious about how and what the oldest state on the African continent lives on, then don’t hesitate: arm yourself with a list of the most significant places and hit the road.

So, among the ranking of the most interesting and frequently visited places in Ethiopia, it is worth highlighting the following:

There is a country, a trip to which the tourist will not provide a rich and luxurious vacation, but offers something more. And that is Ethiopia. It is ideal for those who are interested in primitive culture and untouched nature. There really are such natural sights that take your breath away. What is only worth seeing the striking Ethiopian highlands and enjoy its unusual landscape. Or visit the many wilderness areas with untouched nature. In Ethiopia you can visit several primitive tribes and experience their culture. They continue to drive their economy as they did thousands of years ago. Also in Ethiopia there are often bright festivals, which should be visited by every guest of the country.

To get to know this country better, every tourist should visit the main attractions of Ethiopia.

The ancient city of Axum.

This city is located on the very outskirts of the country. The city itself is not very remarkable, but its history and the sights that confirm it attract a large number of tourists to these places every year. As legend has it, Cyclops people lived here and built large obelisks. You can admire these structures even now. According to reliable sources, the son of Solomon ruled here too.

This fortress is a whole complex. It consists of several buildings, which were built in the 17th century. These are beautiful and majestic castles and palaces. All of them are protected by UNESCO. The buildings are built in several styles. Here you can see the stunning Indian palaces, castles and temples of Arab and Nubian culture. Now every tourist can visit this complex and get acquainted with the ancient architecture.

Church of Saint George in Lalibela

In the city of Lalibela there is another architectural landmark from the 12th century. The entire church is built directly in the rock, to be more exact, it is cut out in it and goes deep into several tens of meters. Such an idea belonged to the king himself. He wanted to turn the city into a religious area and started with this church. But the idea never materialized beyond it. But now every tourist can admire this church and visit the inside.

READ
Hong Kong, China. What to see and do?

Baths of Fasilidas in Gondar Ethiopia

It used to be prestigious for kings to build their own baths. So did Fasilidas in the 17th century. It is a very beautiful architectural landmark that has found its use today. Now, after the services in the temples are over, the pools in this baths are filled with water and the locals bathe in it. Visitors to the country can also get in on the action.

This is an amazing volcano, the trick of which is its constant growth. It has been active since ’67. From time to time, its lake of red-hot lava, which is located in the crater, throws it out and erupts. And with each such eruption, the mountain rises even higher. The volcano is now up to 600 meters high. And it’s still very restless.

Another natural landmark, which is known throughout the world. And all because it is quite unusual. When scientific researchers looked at the surface of this volcano, they compared it to the surface of Jupiter. In 1926 there was a very large eruption. After it, the whole surface of the volcano is covered with a bright yellow with a purple tint lake. This is an amazing sight that every tourist should see.

This park is an ideal place for ecotourism lovers. Not only is there excellent nature, but also the animal world. For a start, you should visit its different zones. These are the savannas, the desert, and the mountains. Also in the middle of the park is its main attraction. It is the peak of Ras Dashen. It reaches more than 4.5 thousand monsters in height. The most extreme tourists can climb to the top and admire the beauty of the reserve from a bird’s eye view.

This is the largest lake in the country, which is the beginning of the Blue Nile River. For Ethiopia this lake serves as the main waterway. Initially, it provided only drinking water and fish for the population. Then a hydroelectric power plant was built on it. Now the lake also provides the country with electricity. And the pyrope of this area itself is very beautiful. A large number of islands with wild pristine nature can visit every tourist.

Another beautiful lake is located in Ethiopia. Only it is salty. But it is not the lake itself that is interesting, but the landscapes that surround it. Those tourists who get into these places, call them unearthly. The fact is that there is limestone here. From it entire towers and pillars have grown on the shores. The whole area is volcanically active, which is why there are periodic clouds of steam.

In Ethiopia there is another interesting national park, which should be visited by every tourist. But it is possible to look there not only at nature, but also at these amazing caves. Here the river flows, which for many years tried to force its way into the rock. That’s how these natural caves were formed. For Muslims it is a sacred place, and every tourist can rent a boat and visit the stunning corridors of the caves.

This river flows along very beautiful banks. There are whole plantations of cotton and cane. During the rainy seasons, its waters are significantly flooded, which contributes to the fertility of the soil of the banks. Also near the river is a beautiful nature reserve. Here you can see animals such as antelope and gazelles. The nature of this river is a real paradise for lovers of such attractions.

The waterfall of Tees Ysat.

This waterfall is located on the Blue Nile River. Locals consider it the most beautiful natural attraction. The power of this full-flowing river is displayed at this very spot. There is a famous tourist town not far from it, so it will be quite easy to get to this place. Every guest to this amazing country should come and admire this wonder of nature.