The most beautiful cities in the Netherlands.

Homeland of Van Gogh and Rembrandt, Erasmus of Rotterdam, Paul Goebbels and Anne Frank during 80 years fought for his independence, and got it in 1581. The Dutch are a very industrious people, and at one time wrested some territory from the sea, so many cities stand on canals and levees. Take a little excursion through this small European country and visit the most beautiful cities in the Netherlands. 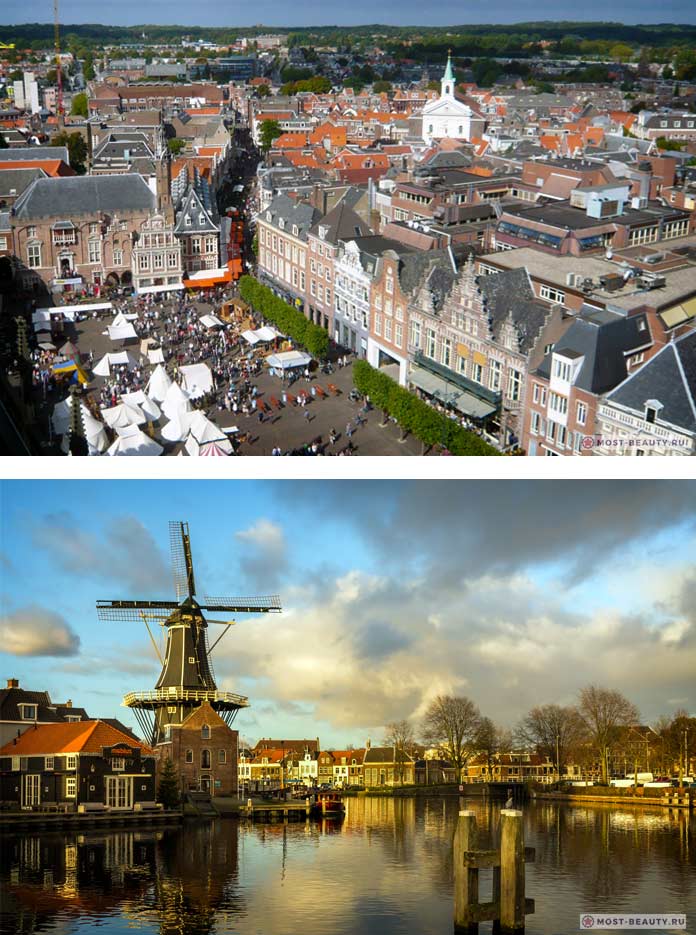 A quiet and cozy town serves as the capital of the province of North Holland. It is also one of the oldest cities in Europe, founded in 1245.

The introduction to Haarlem begins with the market square Grote Markt, above which rises the City Hall and the Watchmen’s House, built in the XIII century. The railway station is an architectural monument of the peculiar Harlem school. 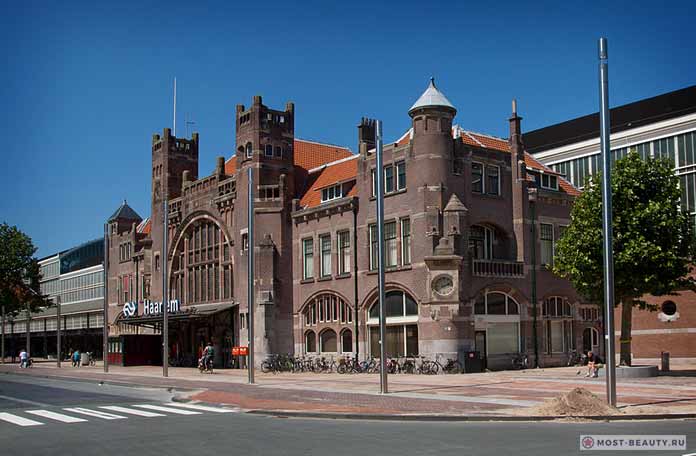 Like most coastal towns, Haarlem is riddled with canals with ornate bridges over them. 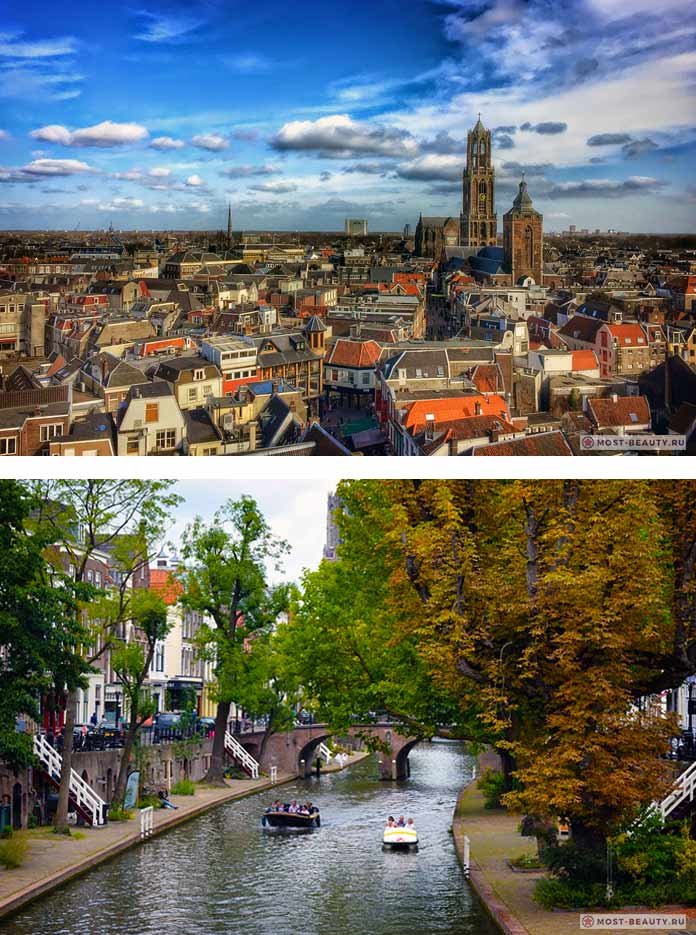 Utrecht, once a ruined and then carefully restored city, continues our ranking. It was founded in the Roman period, as confirmed by archaeological findings.

It is located in the heart of a small Holland, and it was here that the famous Utrecht Union was signed, which began the unification of the Dutch provinces into one state.

The historic part is surrounded by unique two-tier canals, laid in the XIII century. Since 1982 the squares and streets of Utrecht are home to the Oude Muziek, a music festival that brings together tens of thousands of music lovers.

The city on the canals, the name of which is translated from Dutch as “artificially dug canal”. In 1246 it became a city, quickly becoming an important trading center of Northern Europe.

Many generations of citizens managed to preserve the unique historic center with buildings of the XVII century. In the city limits preserved ancient churches built in Gothic style, the town hall building, city gates, preserved from the fortress wall, surrounding the settlement.

Delft is famous for its porcelain, the technology of which production goes back to the early Middle Ages. The blue-and-white bowls, vases and plates are known far beyond the country’s borders. 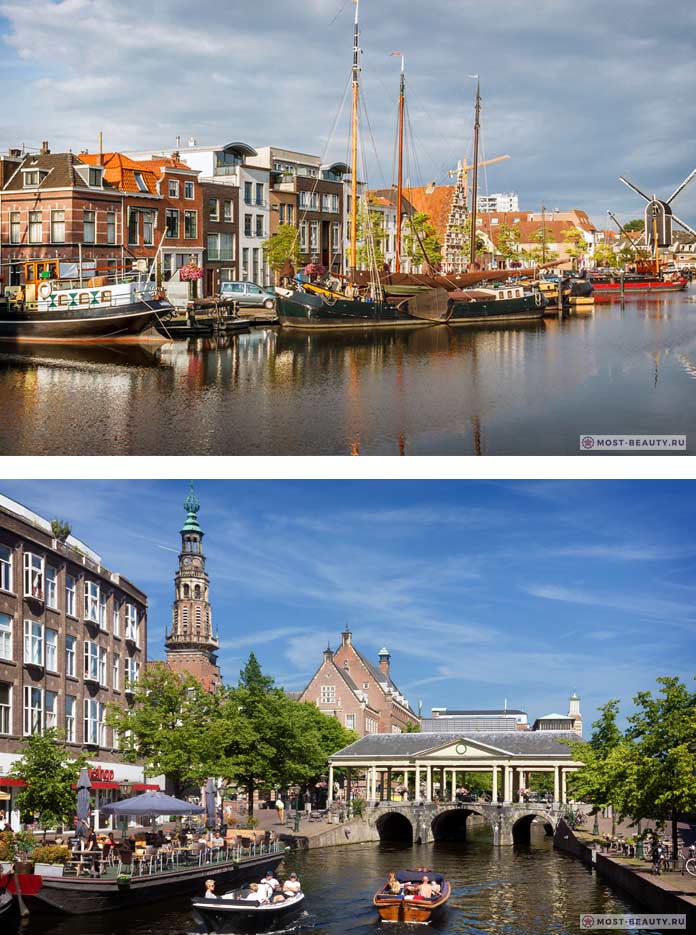 The most Dutch city, according to its inhabitants, traces its history back to the beginning of the X century. There is practically no question for tourists what to see in Leiden.

Here everything breathes with antiquity and national traditions. The network of narrow canals with embankments without parapets, little houses pressed against each other, as well as ancient churches. 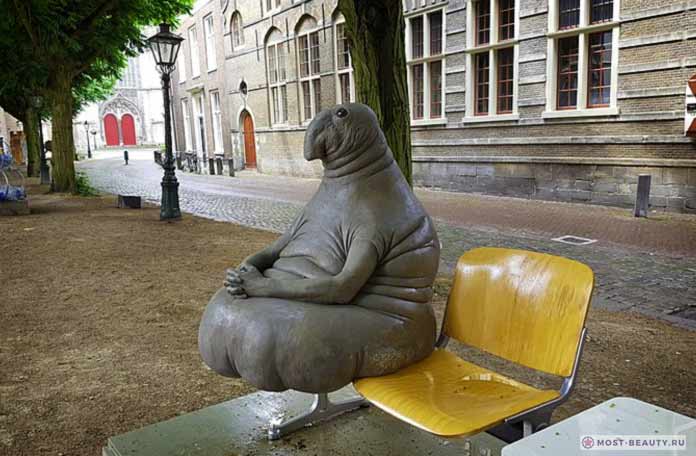 It is in Leiden, among the many beautiful places and attractions stands near the children’s hospital famous sculpture, which became a well-known Internet meme “Waiting Man”. 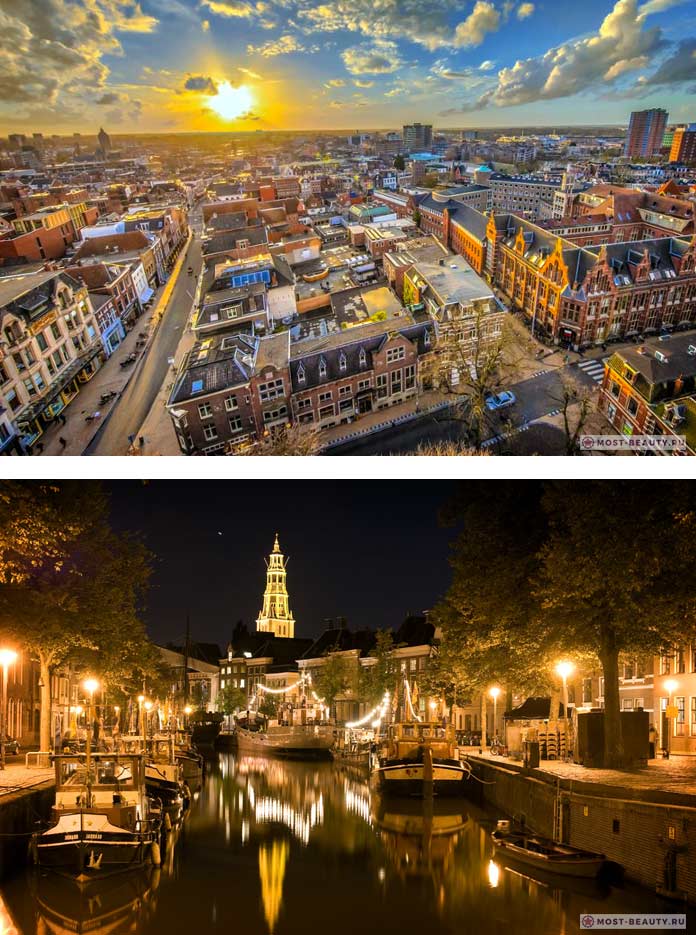 The settlement is first mentioned in a historical document in 1040, and today it is a city of a little over 190 thousand people, of which almost 50 thousand are students of the University of Groningen.

Cheerful, cheerful Groningen is called the European capital of bicycles, and the largest bicycle parking lot is located near the campus. Among the knowledge, the train station, the museum, and the stadium stand out. 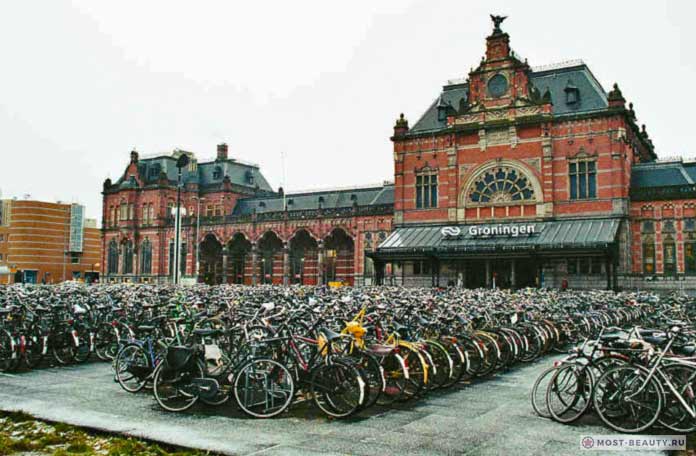 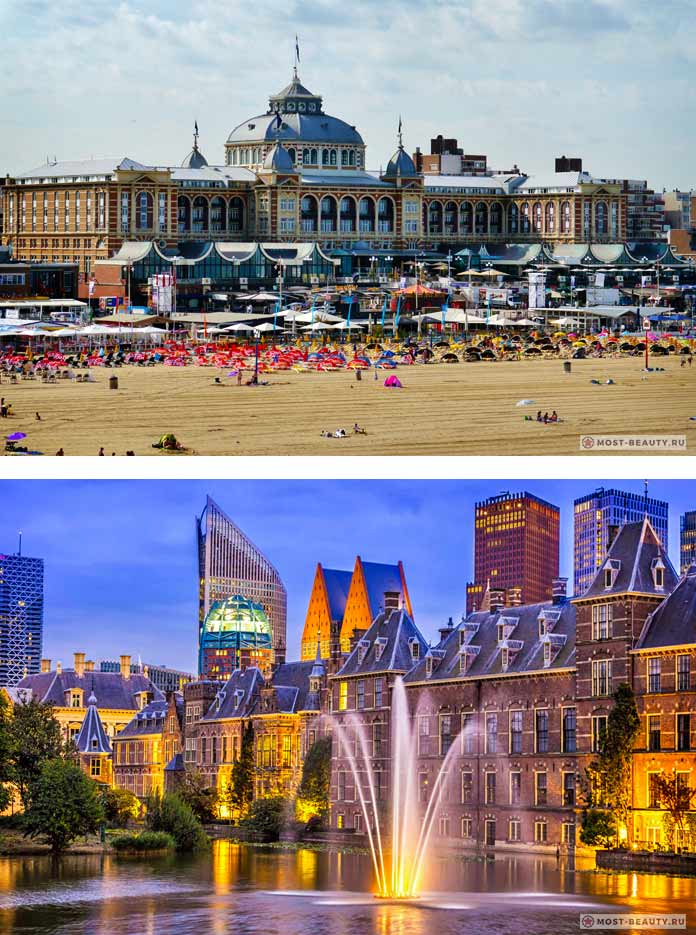 In the list of beautiful cities in Holland is rightly included in the amazing The Hague. Not for nothing the royal couple chose this cozy town as the place of their stay.

Here are located the government, parliament, and offices of international organizations. The third largest city in the country was founded in 1230, having preserved many old buildings in the city limits. It has two beaches with beautiful views of the North Sea. 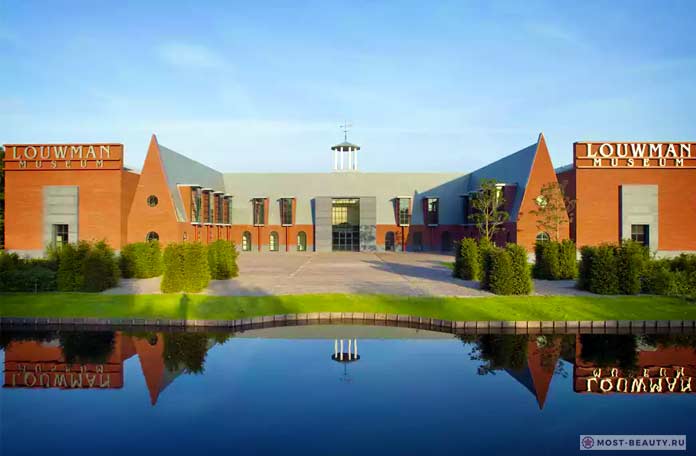 Car enthusiasts know this city, as it is home to the best car museum Lauwman. This is also where the headquarters of the international tribunal is located.

By the way, on our site most-beauty.ru is an entertaining list of the most strange and unusual museums in the world. 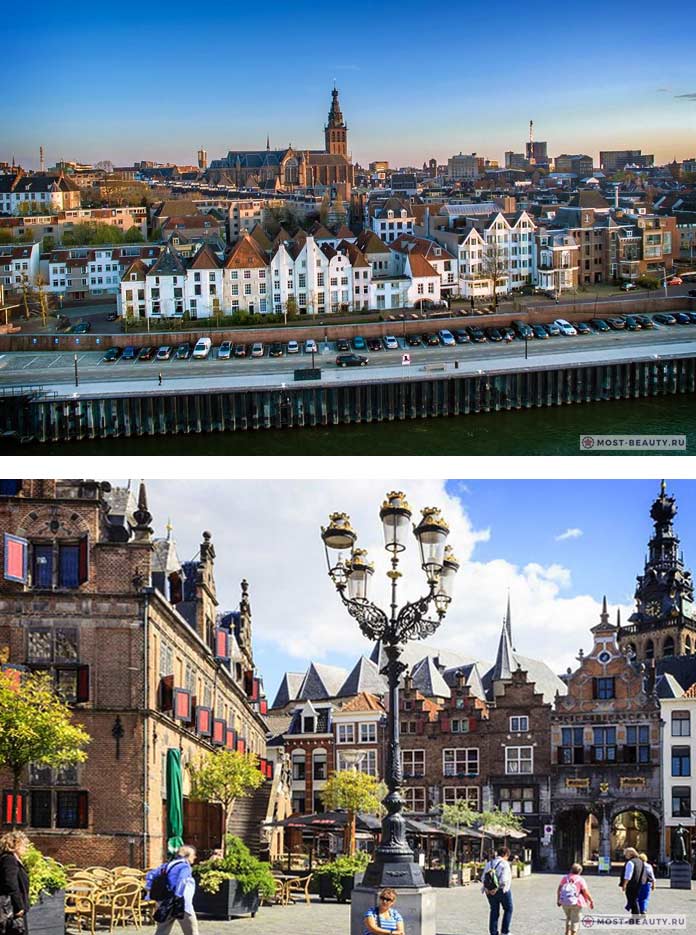 On the river Vaal stands beautiful Nijmegen, founded by the Roman legions Batavodurum. Originally it was a major Roman fortress defending the Rhine valley.

In the Middle Ages it received the status of a free city, becoming a major cultural and commercial center of the northern territories of Europe. Tourists enjoy visiting the Falconer Museum, the exposition of which contains unique artifacts from Antiquity.

Nijmegen is officially recognized as the most ancient city of the Netherlands, and judging by the reviews of tourists, it is a very cozy and clean town. People come here to experience the atmosphere of the Dutch countryside. 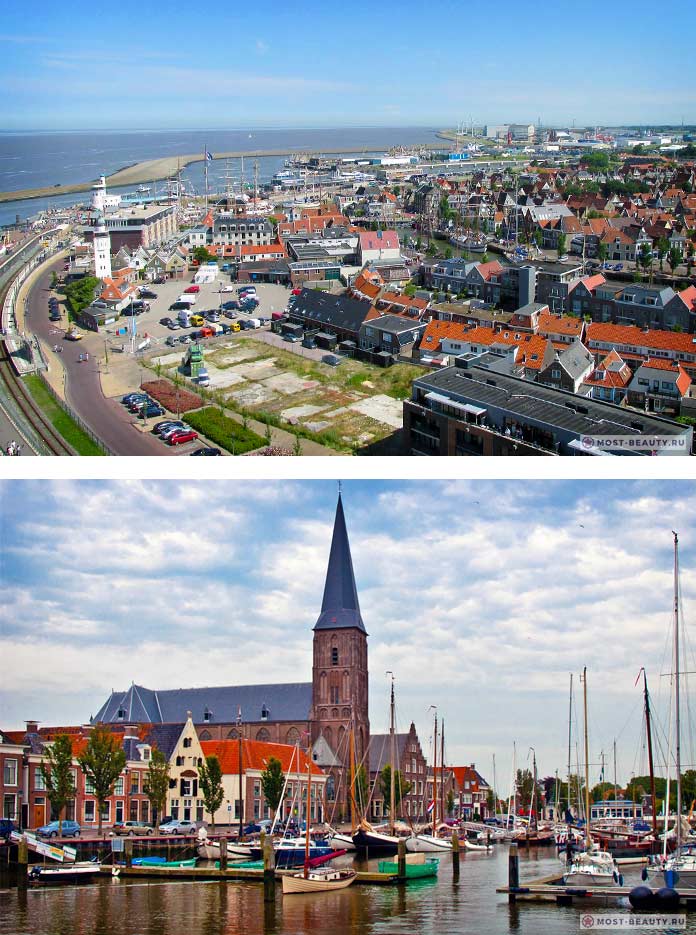 In the province of Friesland there is a city founded at the end of the XII century and in 1234 it received the city rights. Today its population does not exceed 16 thousand inhabitants.

The main income to the city treasury comes from the tourism business. The population is engaged in fishing, processing seafood, as well as in agriculture. The design of small comfortable houses is made in the traditional national style.

The port city is famous for its snow-white lighthouse, towering over the sea bay. Tourists can rent a three-bedroom apartment suite in the lighthouse to view the beauty of the city from above. 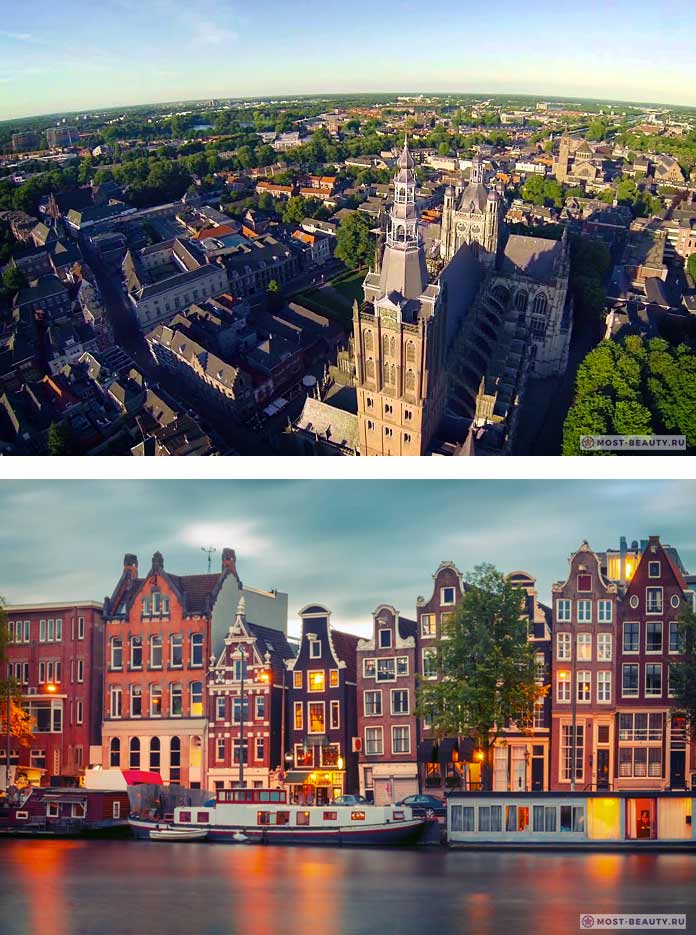 Among the attractions of the city on the Söid-Willemswart canal, tourists note the Church of St. John, built in 1530. In the altar of the church stands a unique wooden statue of the Virgin Mary.

In one of the streets is the only Carnival Museum in the world. Among the famous natives of the city is the famous painter Hieronymus Bosch, who took a creative pseudonym after the name of his homeland. 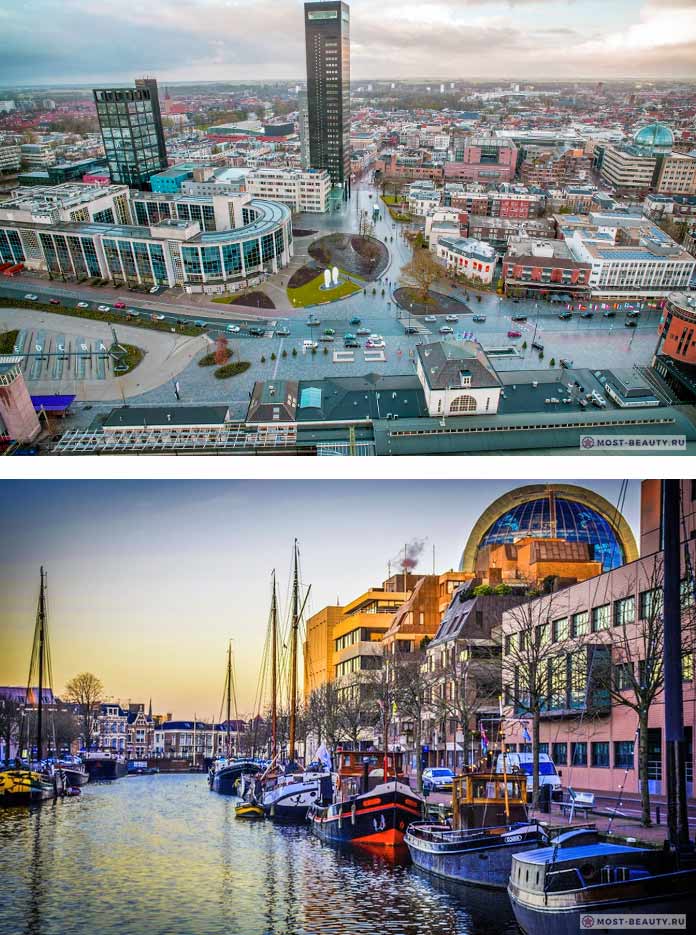 In this small town the local government of Friesland Province is situated, and its history goes back to the tenth century. Tourists know Leeuwarden because here there is a falling tower Oldehove, similar to the Leaning Tower of Pisa. 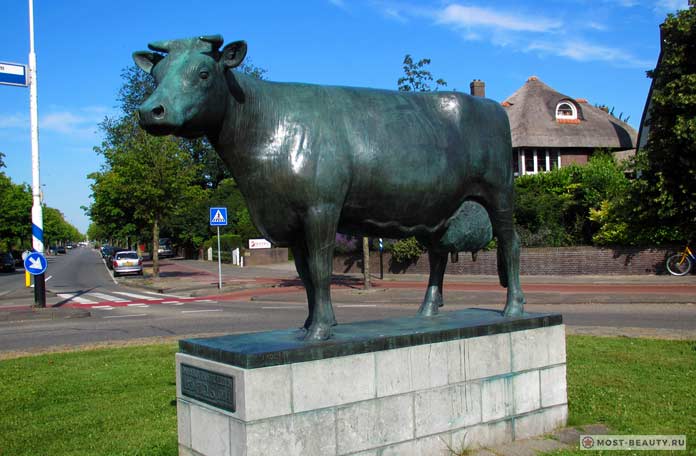 Within the city stands a monument to the cow, on the pedestal, you can read a short inscription in Dutch “Us maem”, which in Russian means “Our mother. 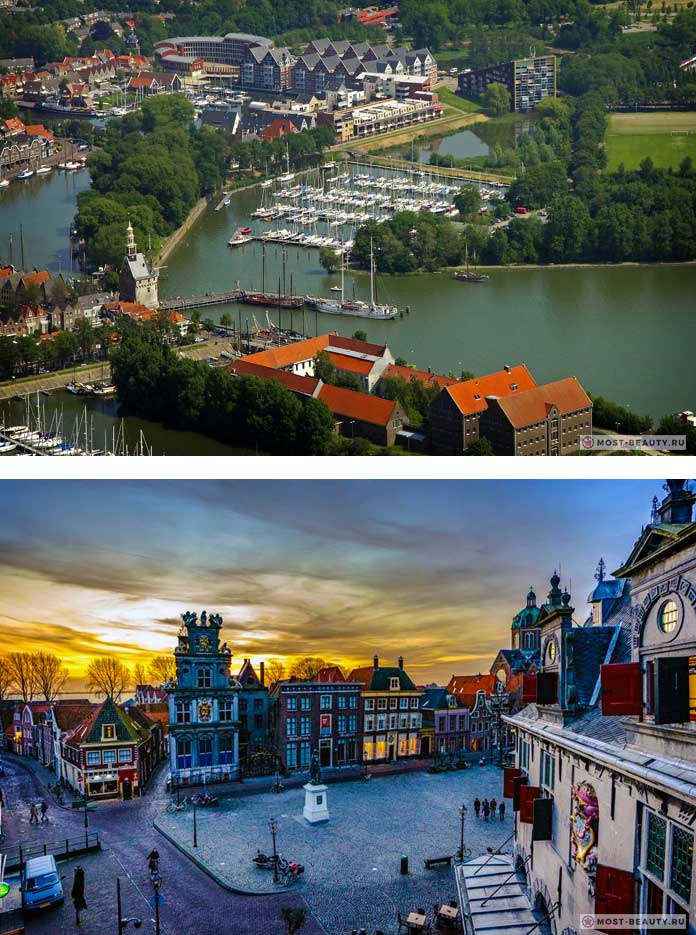 The first settlements on the site of today’s Hoorn in North Holland appeared in 716, and over time the small settlement has grown into a major trading center.

The main square is called Roode Steen, and the famous cheese market was recently restored there. From the square, five of the oldest streets diverge to all sides of the world. There are beautiful churches in the city and tourists consider Hoorn one of the coziest towns in the Netherlands.

There were tragic events in the history when from one of the museums were stolen painting masterpieces worth more than 10 million dollars. Recently, some of the paintings were found in the Ukrainian nationalists, and returned to the country. 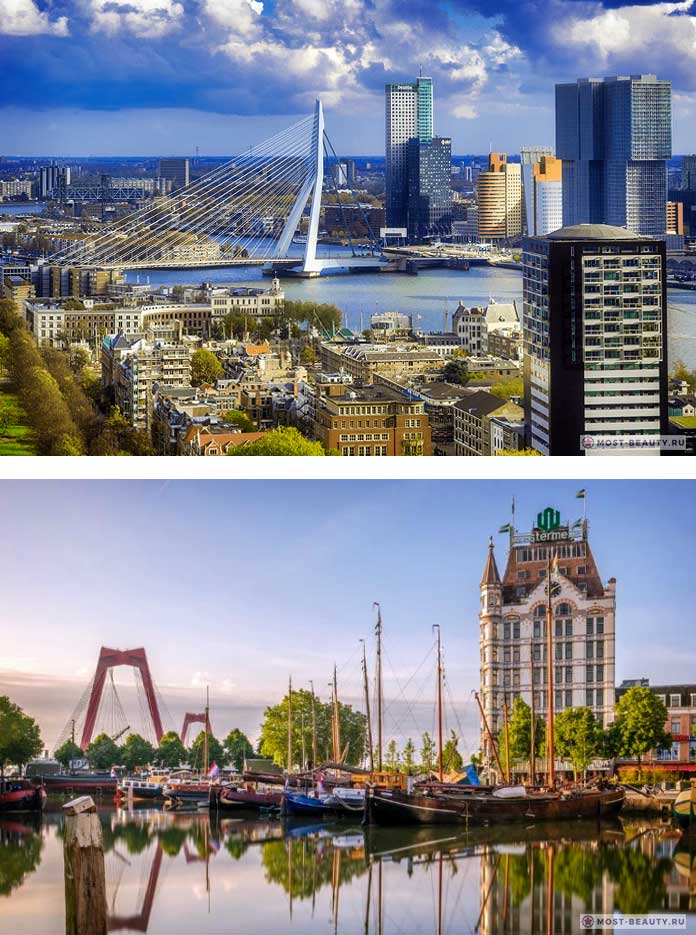 The city was built at the mouth of the Newe Maas River, where it flows into the North Sea. Europe’s largest port is first mentioned in documents in 1283.

In addition to the port facilities, the large city has landmarks from different times in its history. There are majestic bridges over the river, and the streets and squares are decorated with sculptures and unusual fountains.

Today the population of Rotterdam is more than 600 thousand people, and it is the most multicultural city in the country. Moreover, in 2009, the first Muslim became mayor of Rotterdam. 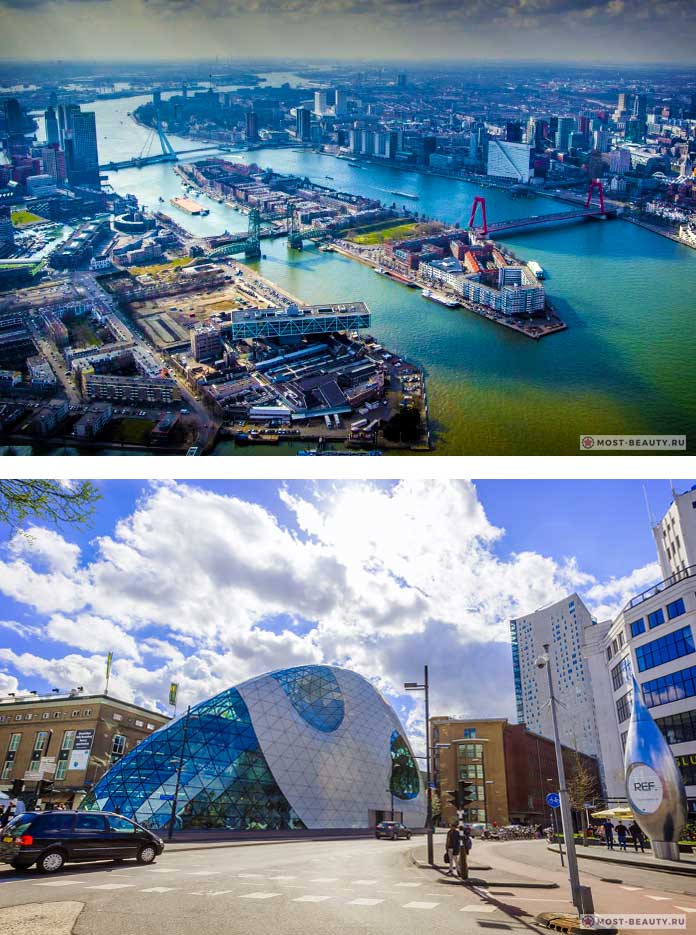 At the intersection of the brooks Hender and Dommel was founded a small settlement, whose residents in 1232 the Duke of Brabant granted the rights of the settlers of the city.

Now Eindhoven is the largest industrial and cultural center of the Netherlands, and the whole world is known for the company “Philips”. PSV players, who have won many European and world trophies, also made their city famous.

The city has the largest museum of modern art, named after its founder van Abbe. Since 1994, the twin city of Eindhoven is the main city of Belarus Minsk. 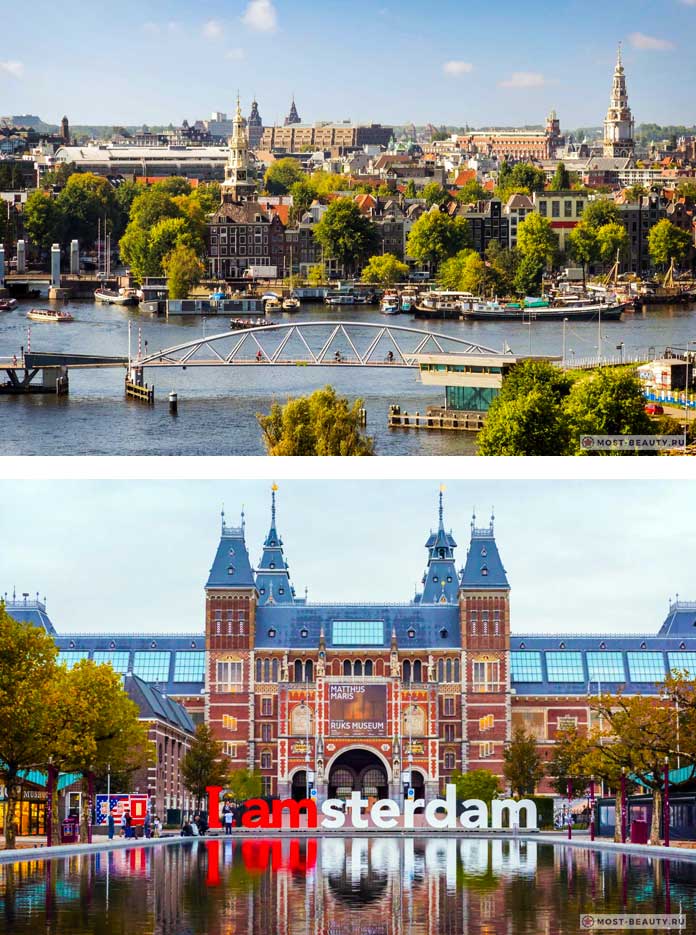 Our journey ends in the Dutch capital, which is nestled at the mouths of the Amstel and Eee rivers. Amsterdam is connected to the North Sea by the North Sea Canal.

The city received its status as the capital of the kingdom in 1814. When visiting Amsterdam, first of all you should walk in the historic part of town to see the unusual dancing houses, as well as walk along the most picturesque bridges. 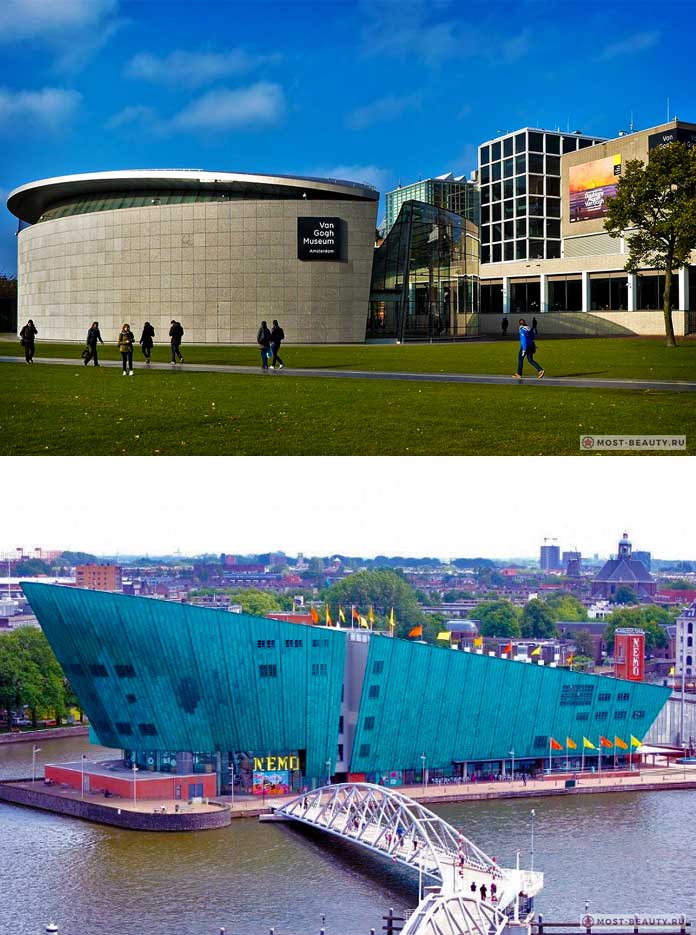 The city of canals and bridges is famous for its museums, among which the unique Van Gogh Museum and the interactive Nemo stand out. The places where the Russian Tsar Peter Alexeyevich was also noted here.

Note, there is an interesting article about the main sights of Amsterdam on our website most-beauty.ru. 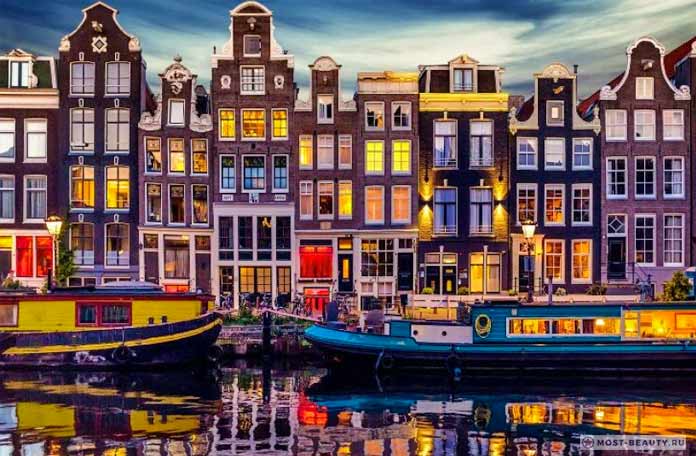 Here we have learned what to visit in the Netherlands. Everyone has his own preferences. Someone likes big and noisy megacities, and someone prefers to live in small towns surrounded by picturesque nature. The Netherlands has both, and the beauty of Dutch cities delights the eyes of many tourists, and villages with traditional Dutch houses and preserved old mills are like miniature cities with a quiet and measured life.