Best 10 things to do and see in Santa Rosa

Best 10 things to do and see in Santa Rosa

The Santa Rosa Hotel is located in the North Bay of California, surrounded by the rolling hills of wine country. There are many different activities and unique events that make it one of a kind. Surrounded by state parks, Santa Rosa attracts nature lovers, and the diverse culture attracts art and history buffs. There’s always something new to see in Santa Rosa.

In the middle of Sonoma County’s beautiful vineyards is Safari West, a little slice of Africa. The owners, Nancy and Peter Lang, opened their park in 1993 to promote wildlife conservation through educational safaris, breeding programs and wildlife research. The more than 400-acre property features more than 900 exotic animals and offers year-round tours and overnight stays. Safari West is one of six private facilities for accreditation by the American Association of Zoos and Aquariums.

Santa Rosa offers hiking trails for more hikers looking for a challenge and families looking for an easy hike for kids. Here are Jack London Historical Park, Sugarloaf Ridge State Park, Annadel State Park and many others that offer views of everything from vineyards to lakes to beautiful surrounding towns. The city of San Francisco can also be seen at certain vantage points on clear days. They are popular places for mountain biking and horseback riding, and most are also good for dogs as long as the dogs are tethered.

Santa Rosa offers about 300 vineyards and wineries to visit. Because there are so many wineries in the area, most offer a quick visit, and there is an annual barrel tasting on the first two weekends in March. There are even some that offer free tastings year-round. It’s easy to spend an entire day – or even a full weekend – exploring the many wineries and beautiful vineyards that Santa Rosa has to offer.

READ
Trip to Barcelona, Spain. When to go and what to see?

Get a bird’s eye view

Get a different view of Santa Rosa by taking a hot air balloon ride. The vineyards and hills look even more beautiful from the sky, and hot air balloons are a peaceful way to experience Sonoma County. There’s Up & Away Ballooning, which has offered ballooning for nearly 18 years, and Ballooning Over Sonoma, which also offers a “Romance Flight.” Both tours offer views of not only Santa Rosa, but Sonoma County as a whole.

Sonoma County has a long history with beer and hoppin’ and was once known for having the best land for hop yards. There are several other breweries in Santa Rosa: Russian River Brewing Company, known for its Pliny Star and Pliny the Younger, available only in February; Third Street Aleworks, where you can get a beer sample on tap for $4; and Fogbelt Brewing Company, which offers all-day Wednesdays.

The Wells Fargo Center is an old church that was purchased by a group of business owners and people in the community and turned into a non-profit arts center. It is among the top 100 art centers in the world. Wells Fargo Centers has hosted everything from Don Giovanni performances to Trace Adkins and George Lopez shows. Most of the performances for 2016 are already lined up, and tickets are available for purchase online and at the box office.

The Pacific Coast Air Museum is a non-profit organization that has been working to acquire, restore and safely operate historic aircraft since 1989. It offers a museum to help educate people about airplane history and hosts events such as air shows and the “Santa Fly-in,” held in December, in which Santa flies a helicopter. If you want to be in an airplane, you can plan a local North Coast tour that flies over the Sonoma County landscape.

Learn about the area’s rich history

Santa Rosa is home to historic landmarks, including the Luther Burbank home and gardens and the Charles M. Schultz Museum and Research Center. Luther Burbank was a world-renowned horticulturist who introduced Shasta-Daisy. The Charles M. Schultz Museum displays its famous Peanuts cartoons, and you can learn about the art of cartooning by learning about Schultz’s impact on Sonoma County.

Spend the Day at the Historic Railroad Plaza

Historic Railroad Plaza is located in the heart of downtown Santa Rosa. The buildings in and around the square have been restored and preserved to serve as a reminder of the railroad’s impact on Santa Rosa. The square is home to a variety of restaurants, stores, hotels and the West End Farmers Market, which is open from mid-March through mid-December. It’s also a hot spot for antique shoppers and offers free rides around the area during the holiday season.

The Redwood Empire Ice Arena, also known as Home Ice Snoopy’s, has been open for more than 40 years and is one of Santa Rosa’s premier skating locations. Charles M. Schultz built it in 1969 because of his love of skating and hockey, and it was a favorite spot of his until his death in 2000. The arena also has a Warm Puppy. Located in local Redwoods, it offers a public rink daily for families year-round.

READ
Petra: an ancient city and an impressive attraction in Jordan

Anna was born in New Jersey but grew up in the Bay Area, and she grew up between the two coasts. As she got to know both states, she developed a love of reading and a strong addiction to coffee. She currently attends Sonoma State University, where she teaches an English degree, and she spends her free time hiking with her dogs and making sure she knows every spot in the Bay Area. 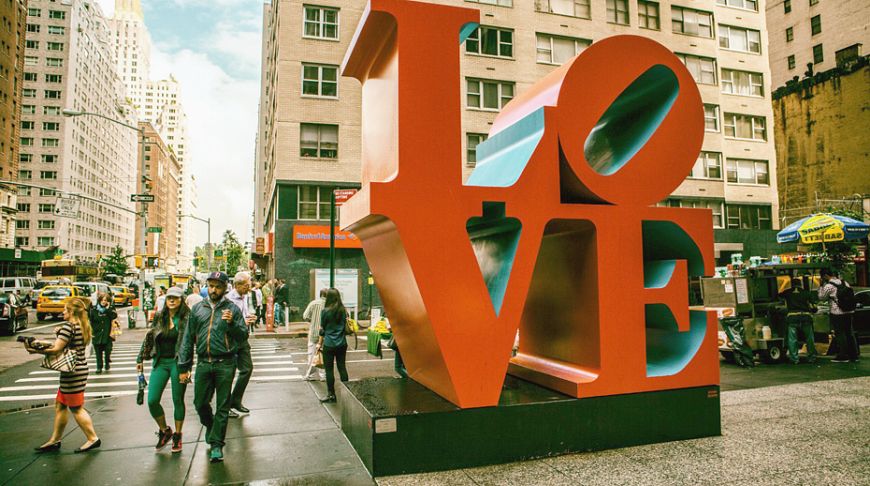 America is big and life is short. We’ve compiled 15 things you absolutely must do or see in this wonderful country. Don’t put it off until later!

We’ve already told you about 15 things you should definitely do or see in the U.S. But let’s not stop there! Check out 15 more must-do’s!

Taste “food on a stick” at the Iowa State Fair

What makes this annual state fair so special is that almost all the food is sold on a stick. Over 75 viands, all on a stick! Chocolate-covered bacon on a stick, sausage on a stick, and even Milky Way on a stick! As well as plenty of rides and contests. 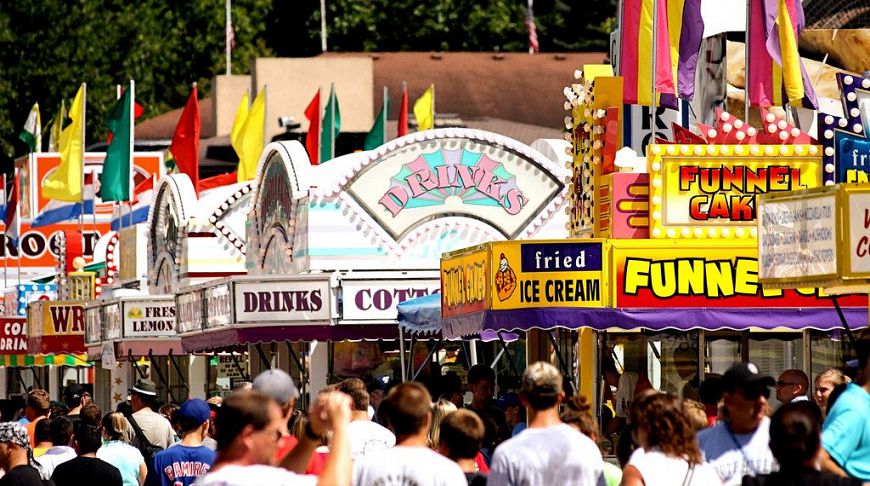 Swim in the Great Lakes.

The Great Lakes are a system of bodies of water connected by rivers and straits across the United States and Canada. Visit Grand Haven on the shores of Lake Michigan, for example: see the pier and lighthouse, and try a peanut butter beer at local brewery Odd Side Ales. 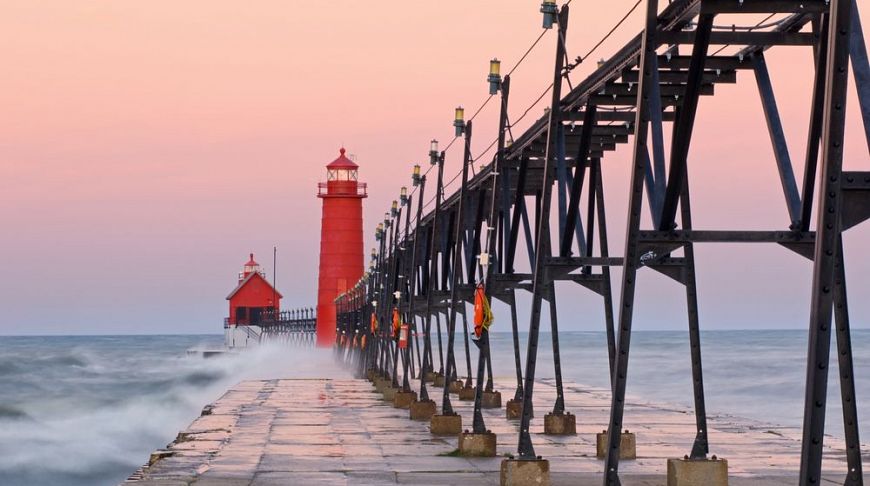 Admire the sunset on the Upper Peninsula

Washed by Lakes Michigan and Guron, the peninsula is located in northern Michigan. There’s nothing better than watching a sunset over one of the Great Lakes: the town of St. Ignace offers stunning views of the Guron, and near the town of Manistique, of Michigan. 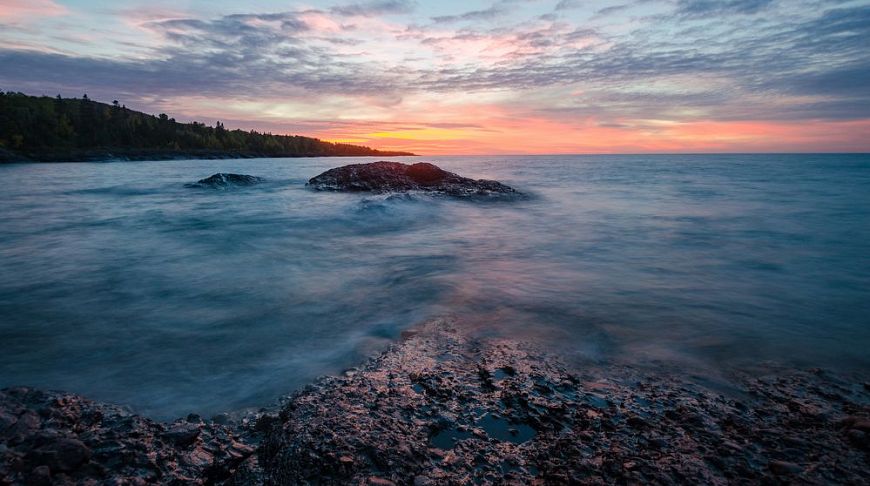 Drive along the Pacific Coast Highway .

. from Southern California to San Francisco. And do it for as long as possible. This road is more than 800 kilometers long and stretches along the Pacific Coast and is one of the most beautiful in America. And be sure to make a stop at Big Sur! 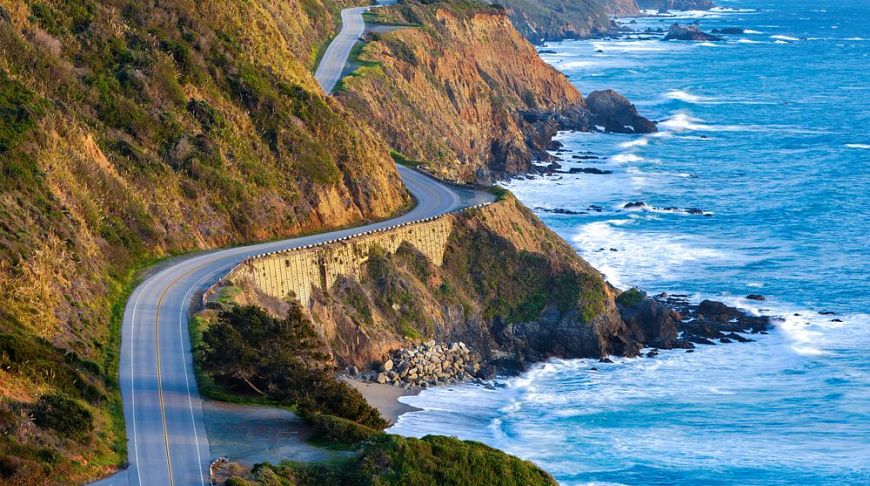 Located in Colorado, Aspen is one of the world’s most expensive ski resorts. There are regularly held major ski competitions, including the World Cup and the Winter X-Games. 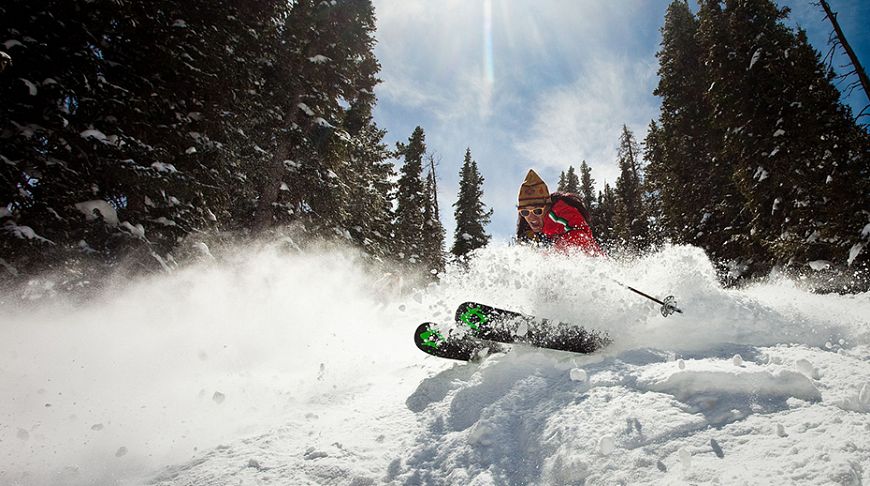 Walk around Venice Beach and Santa Monica in Los Angeles

Start with drinks at the rooftop bar at the Erwin Hotel, then stroll the waterfront, throw a few dollars at a street performer you like, check out a couple of stores in search of medical marijuana, then head to the Santa Monica Pier and take a ride on the world’s only solar-powered Ferris wheel in the evening. 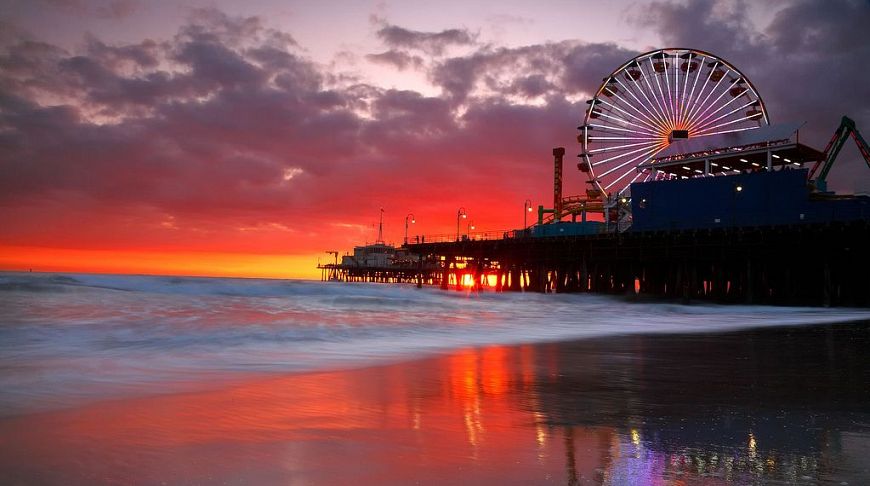 Head to “wine heaven,” to small private wineries: stroll through the vineyards, see how the wine is made, and, of course, taste it in a luxurious tasting room or at a modest picnic! 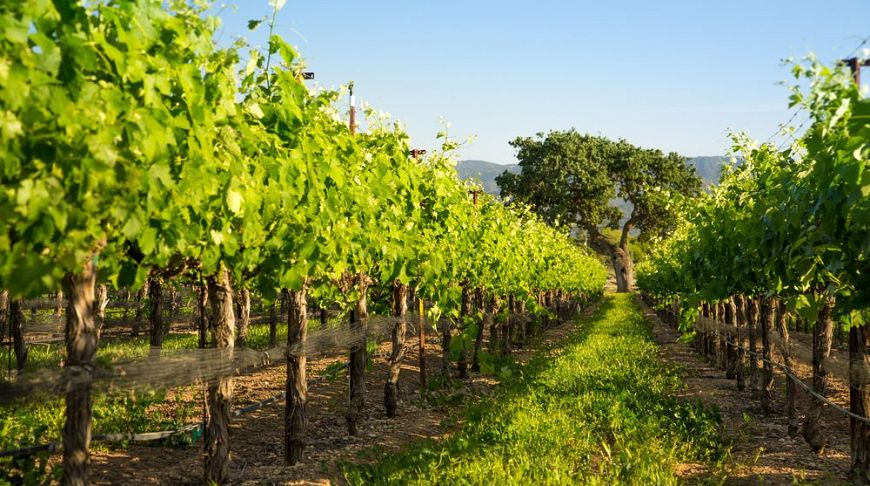 Sign up for a group lesson or, if you don’t feel confident enough, take a private lesson with a trainer. Then you can celebrate your victory over the waves at a local Beachcomber bar or Draft, a traditional American restaurant. 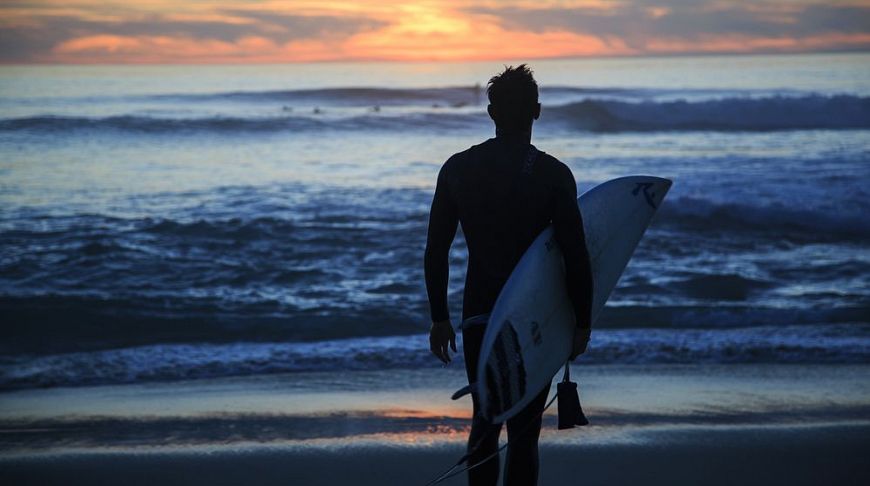 Check out the “flying fish” at Pike Place Market

Pike Place Market is located on the waterfront in Seattle. It sells mostly seafood, small farmers’ and artisan goods. The main reason for the market’s popularity is the “flying fish.” The vendors make a mini-show out of every purchase, flipping the slippery fish between them and never dropping it. 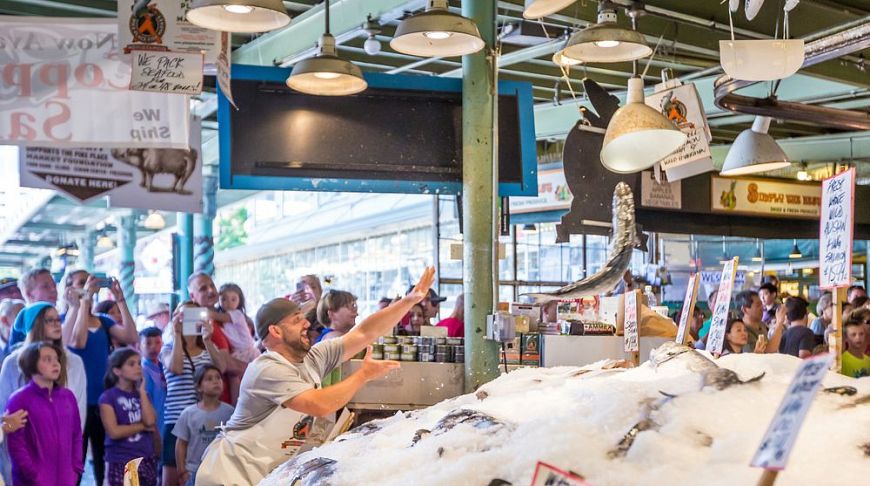 Get lost in Redwood National Park

The park is located in California, just north of San Francisco. It is known for its ancient sequoias, which are one of the tallest and most massive species on Earth. If you haven’t posted a photo of yourself hugging a giant tree on social media after your visit, consider that you haven’t been there! 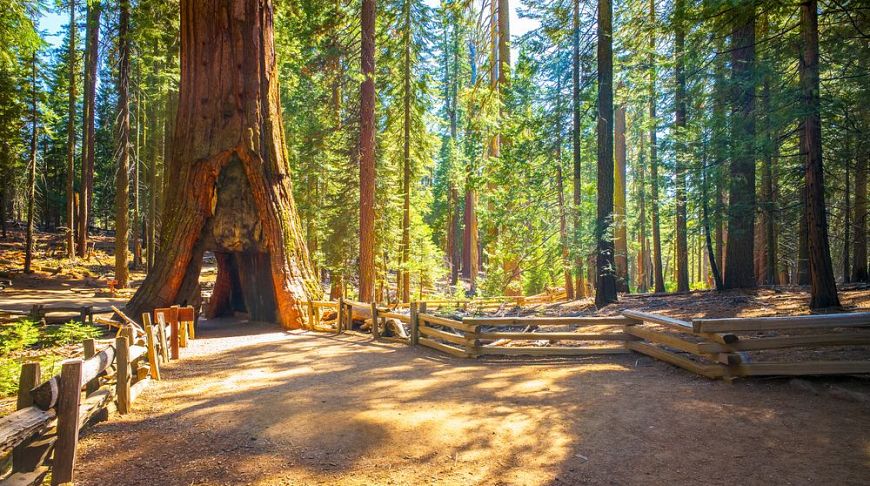 See a rodeo in Wyoming

For almost 80 years, every summer night in the small town of Cody, Wyoming, you can watch a rodeo. It’s the rodeo capital of the world. We’re not kidding, seats for the Cody Nite Rodeo need to be booked a couple of months in advance! 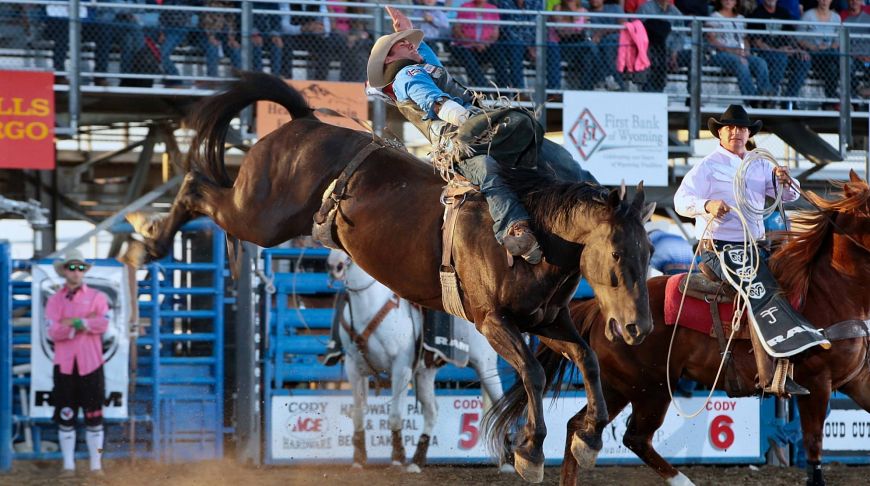 Walk between the bookshelves at Powell’s Books

Powell’s Books in Portland is the world’s largest new and used bookstore. Founded in 1971, it occupies an entire block with millions of books on the shelves. And while you’re in Portland, check out breweries like Hopworks or Breakside and try the local doughnuts. 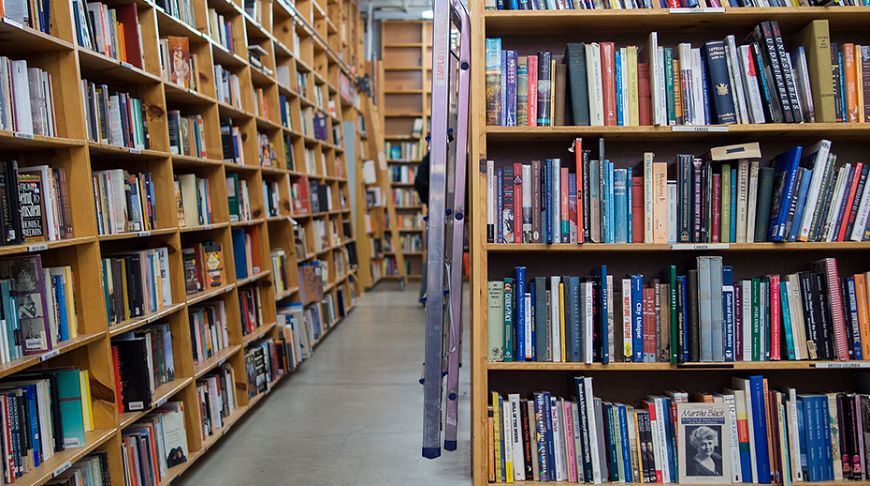 Puerto Rico is home to three bioluminescent bodies of water: Mosquito Bay, La Parguera and Laguna Grande. At night, their waters glow a soft blue and green color. This is due to the presence of millions of single-celled organisms, dinoflagellates, in the water. In Puerto Rico, the concentration of the latter is particularly high. They say that sometimes the glow is so bright you can even read a book. 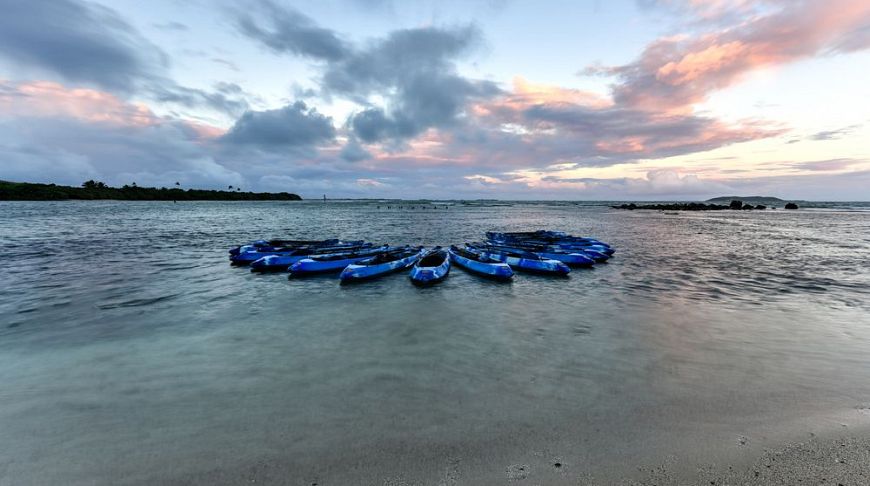 Marvel at the northern lights in Alaska

There’s certainly good beer and waffles in Juneau, but when it comes to the northern lights, it’s time to head to Fairbanks, a small town in central Alaska. Most importantly, do it from November through April, when it’s dark all the time. 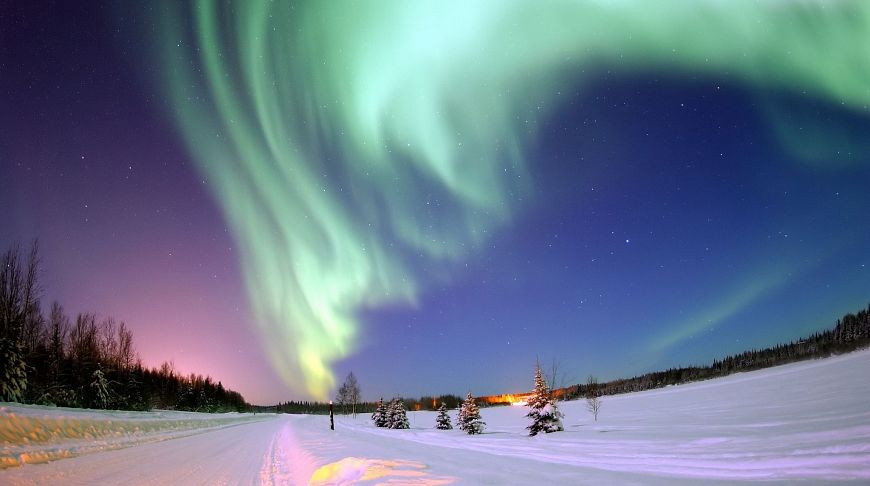 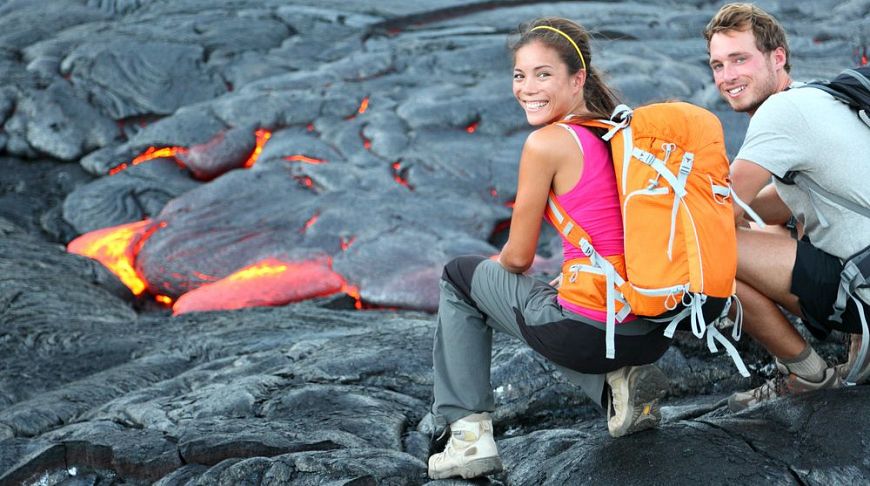