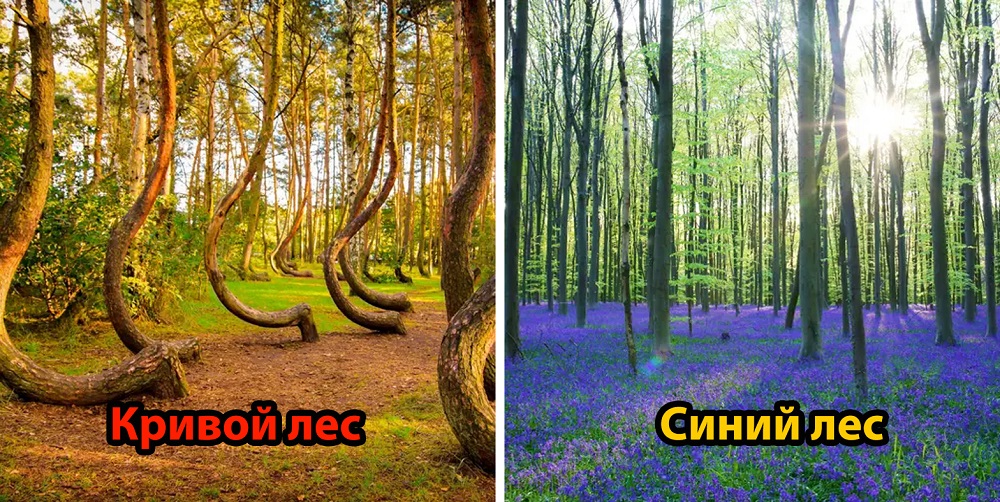 Forests cover more than 30 percent of the Earth’s land surface and cover about 4 billion hectares. In addition to their important ecological function – absorbing carbon dioxide and storing carbon, making them the “green lungs of the planet” – each of them is beautiful and unique in its own way. The rainbow-colored eucalyptus trees in Hawaii, for example, will make you believe you’re magical, while the forest in Yemen will make you feel like you’ve traveled to another planet.

Below you’ll see 20 forests from around the world that showcase the beauty of our planet. 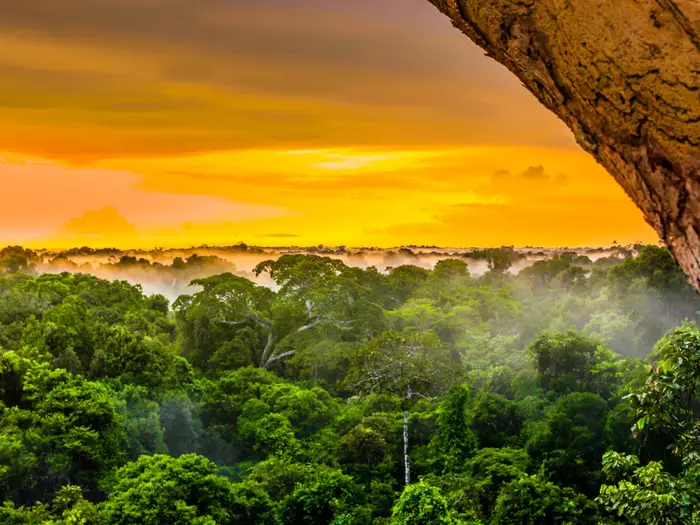 The Amazon Rainforest stretches across several countries – Peru, Bolivia, Brazil, Venezuela and Colombia – and is considered the largest rainforest in the world. It covers an area of 5.5 million km2. There are 6,600 km of rivers in this dense forest. But the rainforest isn’t just about natural beauty.

It’s important for the health of the planet: according to World Wildlife, “with 90-140 billion metric tons of carbon, rainforests help stabilize the local and global climate.” And releasing even the smallest fraction of that amount could accelerate global warming. 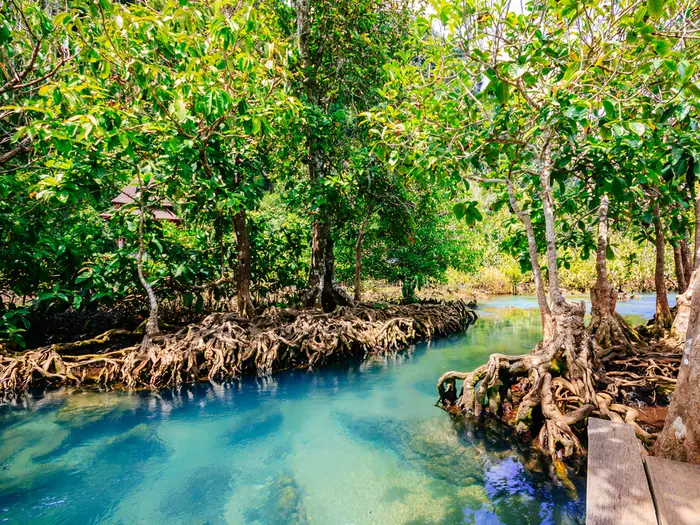 The bright blue waters of a Thai forest will mesmerize even the most unimpressed tourist. Sometimes called the two-water canal, Tha Pom Khlong Song Nam is a unique experience, with magnificent mangroves and a crystal clear stream. Its azure color is the result of mixing sea water with fresh water at high tide. 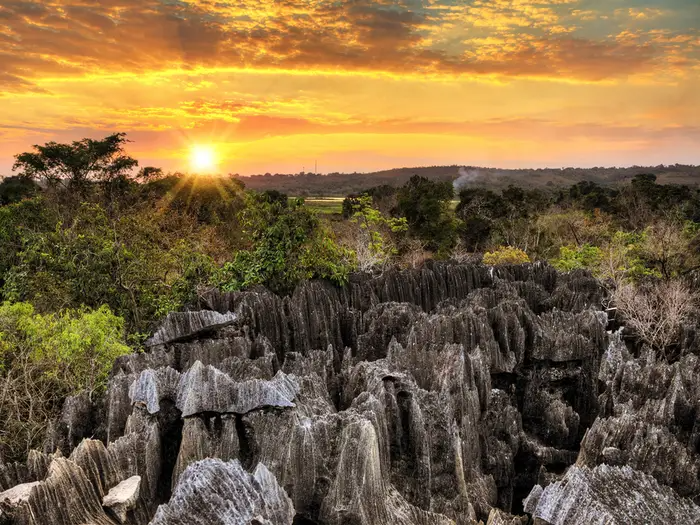 If you’re a rock lover, you’re sure to be impressed by the Madagascar Nature Reserve.

READ
The 18 best sights of Mezmay - description and photos

The “Stone Forest” of Tsingi is one of the most unique landscapes in the world. It is a rugged terrain with karst formations and porous limestone formed over time by rain.

The rugged nature reserve, a UNESCO World Heritage Site, is home to a number of rare and endangered animals, including 11 species of lemurs and several endemic species such as the Lowland Red Forest Rat. 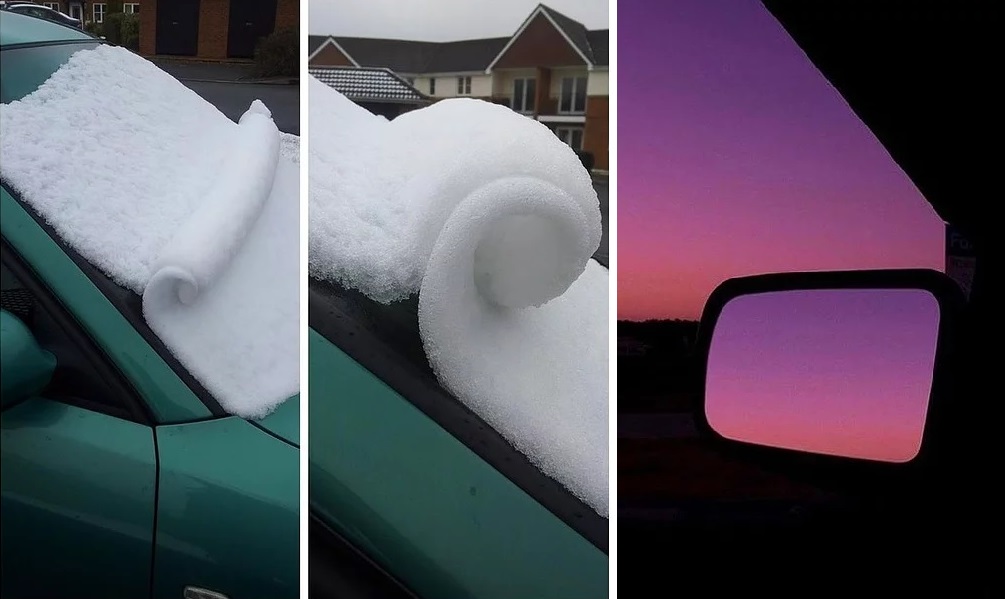 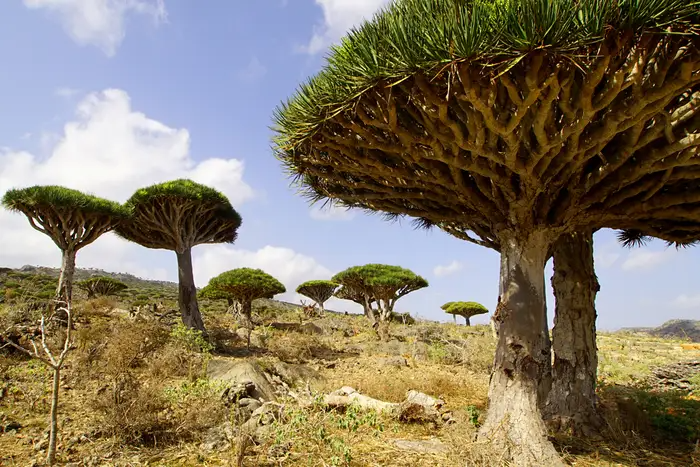 This forest, one of the most unique in the world, consists of unusual Dragon trees, a source of “dragon blood.” The landscape of the forest can be easily mistaken for something extraterrestrial. And no wonder: 37% of the flora of Socotra is found nowhere else in the world. Maybe it’s because the archipelago of four islands was separated from mainland Arabia 34 million years ago. 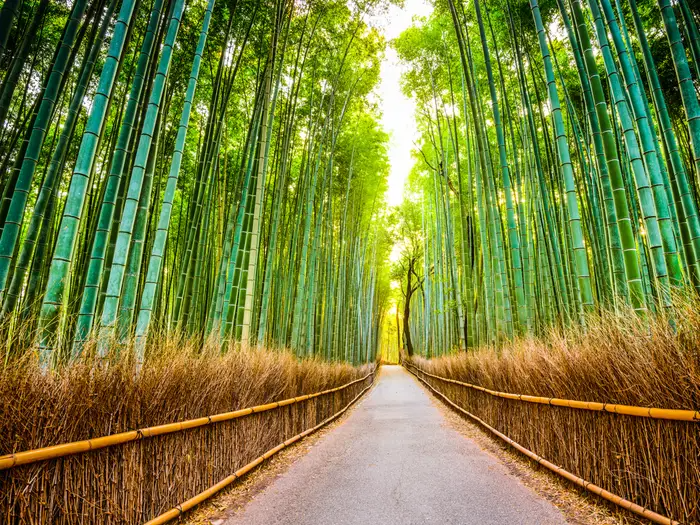 In the Kyoto area, in the middle of the urban landscape, you can find another natural wonder: the Sagano Bamboo Grove. It is such a peaceful, quiet, and harmonious place that the Japanese Ministry of the Environment has included it in the “100 Soundscapes of Japan,” places that concentrate sounds arising from the environment. The fences inside the grove are made entirely of natural materials – dried bamboo branches. And in the souvenir shop at the entrance you can buy a variety of bamboo products. 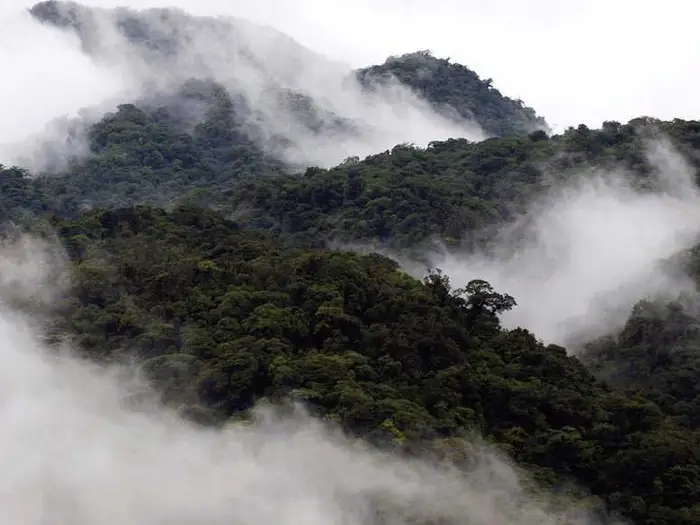 When traveling to Central America, it would be a crime not to check out the Monteverde region, one of the most popular places for ecotourism. The cloud forest is a rainforest located at high altitude–hence the increased haze. It is one of the rarest habitats on Earth.

The mesmerizing 105 km2 forest is home to several thousand species of plants and animals – there are only 500 species of birds! Walking along the suspension bridges, you can also see monkeys, cougars, the famous red-eyed tree frog, and other colorful inhabitants of Costa Rica.

READ
Where to go in Tula - 55 best places for tourists 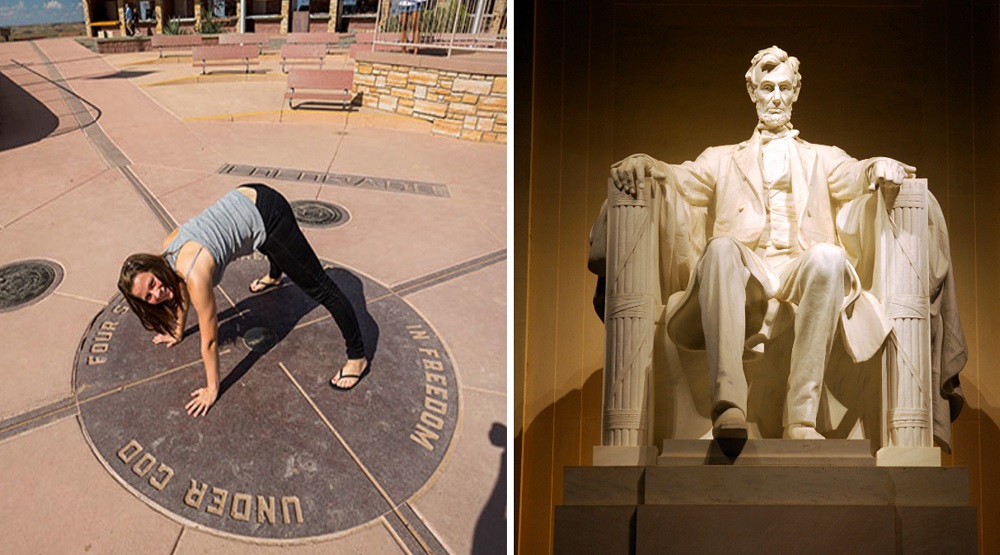 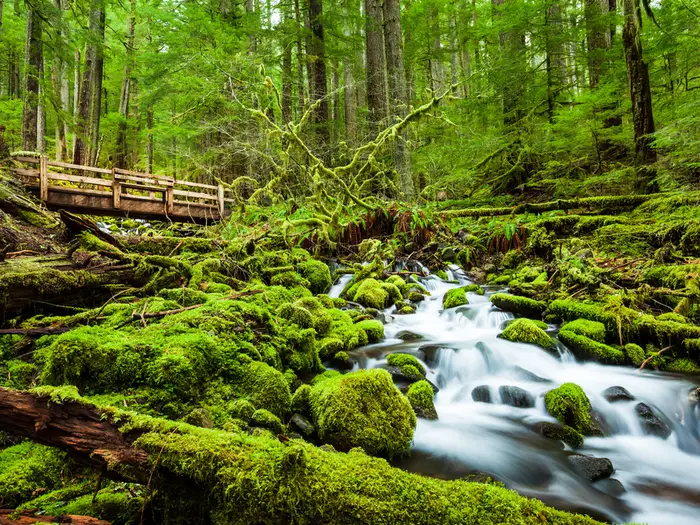 For relaxation for the eyes, go to Washington’s Olympic Park, where soft, warm shades of green are concentrated. Spread across Washington State’s Olympic Peninsula, the forest covers about 2,500 km2 and includes a variety of landscapes, from temperate rainforests to craggy mountains and coastal beaches.

One of four rainforests on the peninsula, Hoh, which receives 3,700 to 4,200 millimeters of rainfall per year, is known for its thick moss that envelops the stems of relict trees. Once you find yourself among the fluffy evergreen forest, you’ll think you’re in a fairy tale or, well, in the world of Twilight.

8. The Beech Grove of Ozzaretta in Spain 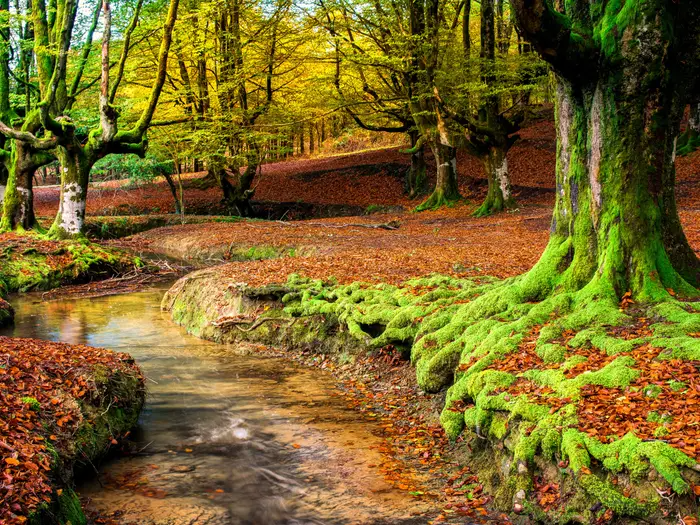 In the Basque Country lies another place that is fascinating – the Gorbeya Natural Park with its ethereal forests. One of them is the grove of Ozzaretta with beeches of bizarre shapes. The park itself gets its name from the top of the mountain range, which Basque mountaineers use as a landmark when climbing the hills. 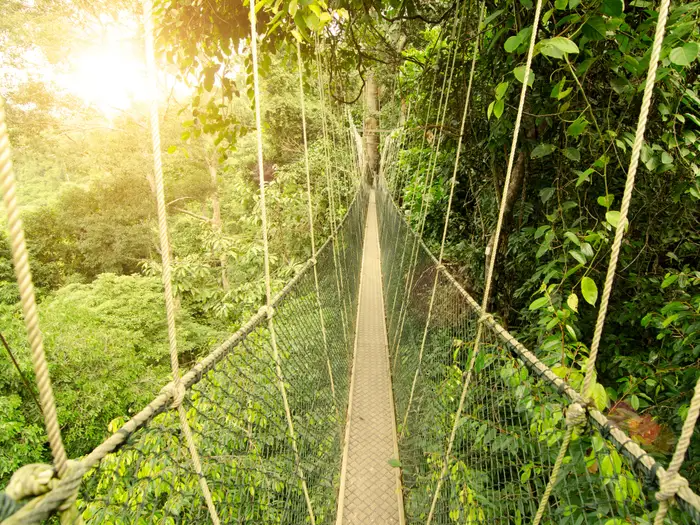 This forest is 130 million years old, making it one of the oldest forests in the world. From the suspended walkway, located at an altitude of 70 kilometers, there is a stunning view of the relict trees. The extraordinary scenery can be admired during a hike or river cruise. 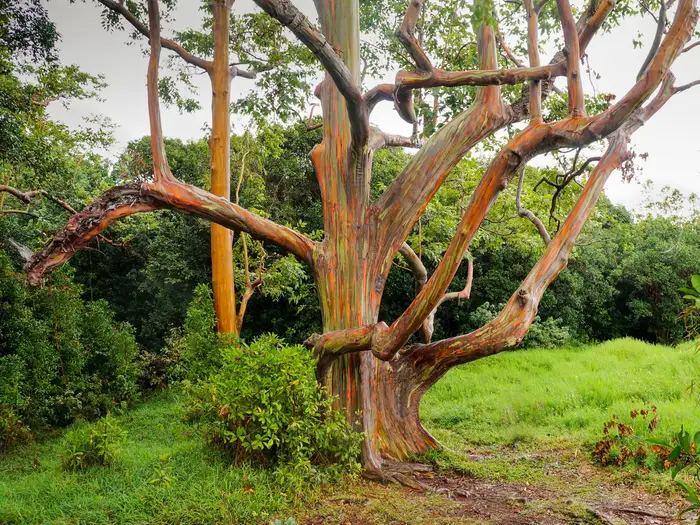 The rainbow eucalyptus trees that grow in the Philippines are easily recognized by their attractive bark, which looks as if it has been hand-painted with bright colors. But man has nothing to do with it-the bright green inner bark layer fades over time when the outer shell peels off, creating a magical range of bright colors.

11. the black forest in Germany 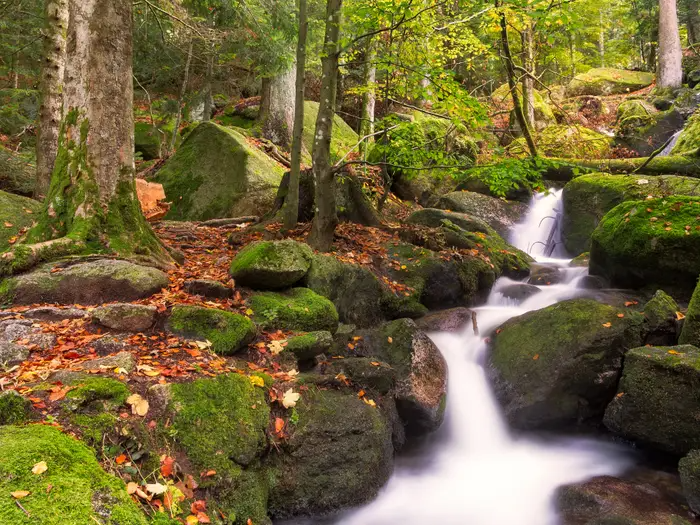 READ
What exotic countries are worth visiting?

12. the Sequoia National Park in California 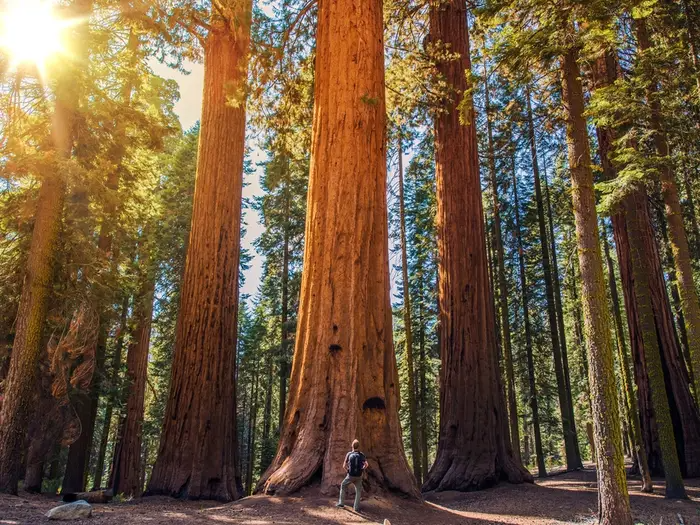 “Sequoia” is sometimes called the “giant forest” because of its tall trees. For example, there you can find the General Sherman tree (named after Civil War general William Tecumseh Sherman) about 83 meters high and with a trunk volume of 1,487 m3. It is about 2,200 years old and is considered the largest tree in the world.

The park is also home to the sixth tallest sequoia, named for Franklin A. Bull, head of the logging operation, who decided to keep the tree alive because of its large size. 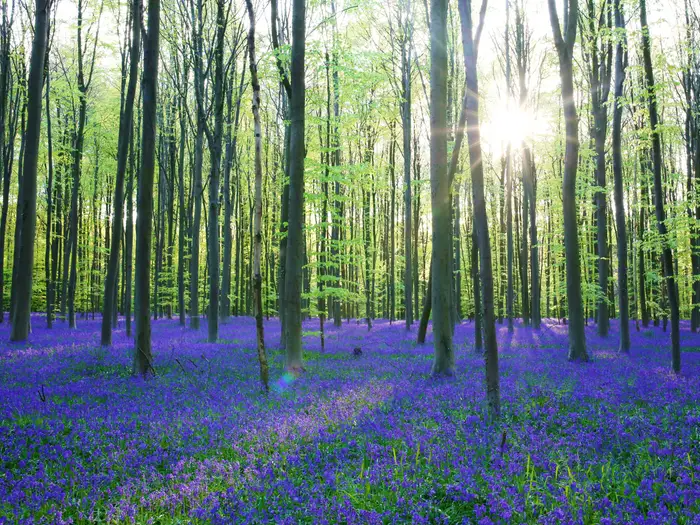 Another fabulous forest is the Hallerbos forest in Belgium. It is often called the “blue forest” because of the many bells that cover its ground in the spring. It is one of the last remnants of the Silva Carbonaria, an ancient “coal” grove whose beeches and oaks formed the natural border between the West-Francian kingdom of Chlodwig I and the East-Francian kingdom of Sigebert the Lame in the early Middle Ages.

14. The Crooked Forest in Poland 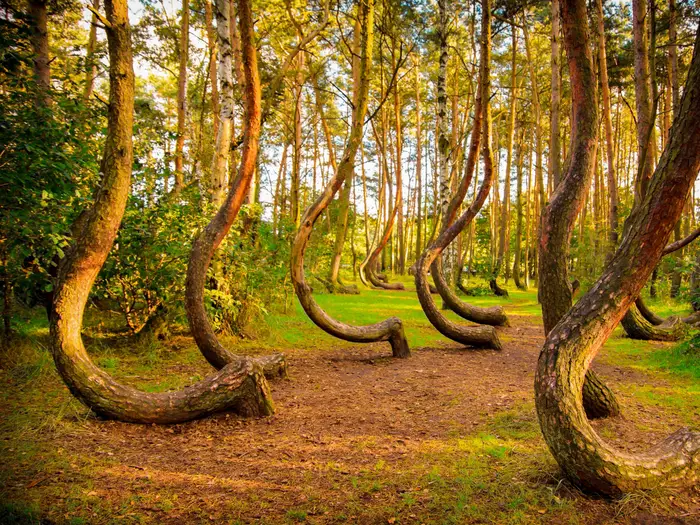 One of the most mysterious forests in the world is the Polish Krivoy Les (Krzywy Las). It takes its name from the 400 pine trees, all of which have a bizarre shape and curve practically at right angles to the base. Theories as to how the trees got their unusual appearance vary.

Some argue that gravitational changes in the region caused the bends; others say heavy snow that flattened the trees over time. There are also those who believe that the shape of the trees is the work of man. 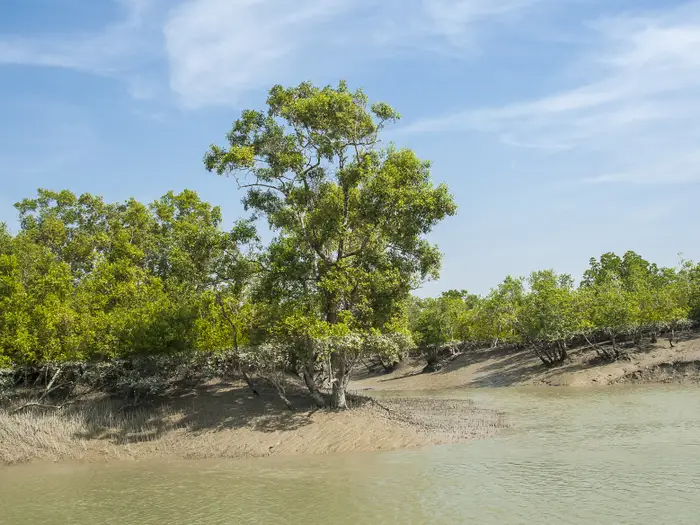 A group of low-lying islands in the Bay of Bengal is home to the world’s largest mangrove forest, which spans 140,000 hectares. As the site of three wildlife sanctuaries, the Sundarban has been designated a UNESCO World Heritage Site.

READ
The 16 best sights of Katowice - descriptions and photos 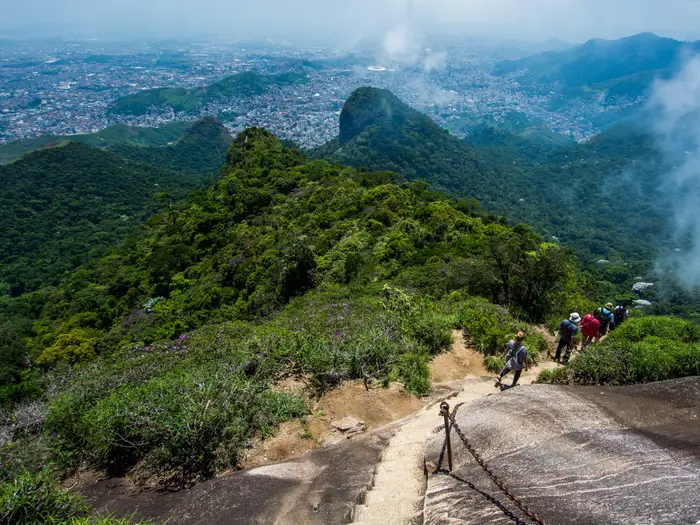 Under the gaze of the famous Christ the Redeemer statue in Rio de Janeiro, towering over the city atop Mount Corcovado, stretches Tijuca National Park, one of the largest urban rainforests on the planet. In it, you’ll find 30 waterfalls and famous mountain peaks (Pedra Bonita, Pedra da G‡vea, and Pico da Tijuca, among them).

Amazingly, such a dense forest was man-made! This land was once part of the Atlantic rainforest, which was cut down by local industrialists. But in the 19th century, the trees were planted again – Emperor Pedro II of Brazil was concerned about the deforestation of the area due to the increase in coffee plantations.

17. Loch Lomond and the Trossachs National Park in Scotland 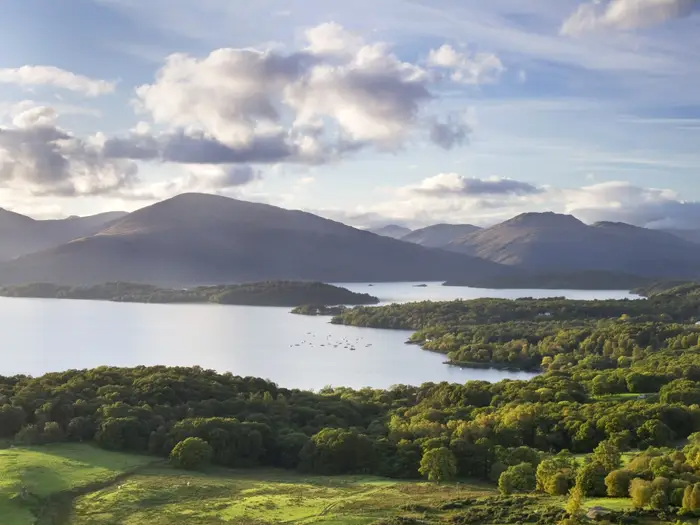 The Scottish Forest, located along the shores of Loch Lomond, is a “forest in the making” – here in the beautiful Trossachs Valley, large-scale conservation efforts are underway to preserve the trees. The park is home to conifers, broadleaved and Atlantic oaks. Its area is 1,865 km2, making it the fourth largest among the national parks of the British Isles. 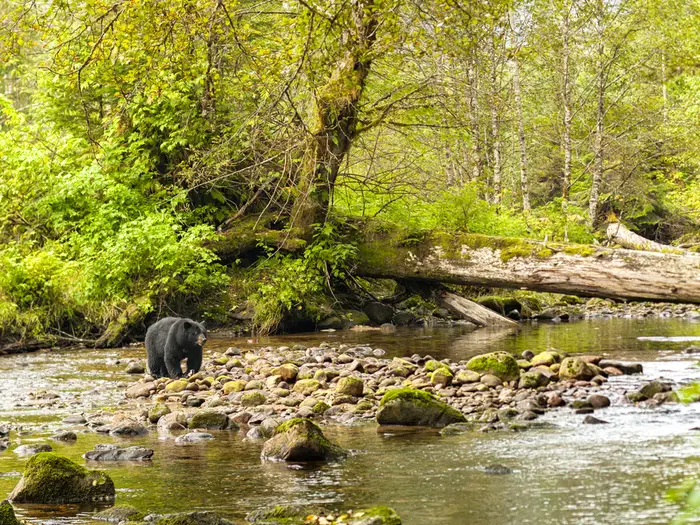 This is the only habitat for the white-haired Kermode bear – hence the name. The forest is part of the world’s largest temperate coastal rainforest. What makes it a truly picturesque place are the local fjords, granite cliffs, and glacier-covered mountains.

Thanks to an agreement signed in 2016 between indigenous peoples and the government of British Columbia, the area of protected forest land has increased to nearly 77,000 km2 .

19. the Yili Apricot Valley in China 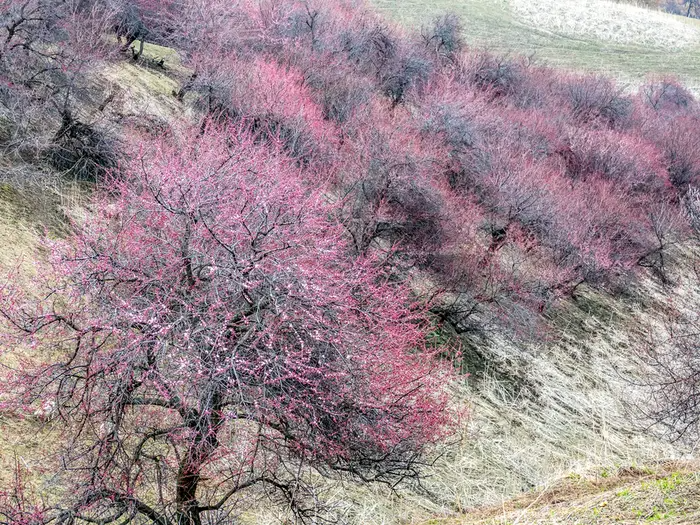 In Xinyuan County, there is a real fruit valley covering about 20 km2 . This amazing place is an oasis dotted with flowering fruit trees. You can see the valley in all its glory in April, when the beautiful pink flowers appear on the trees. 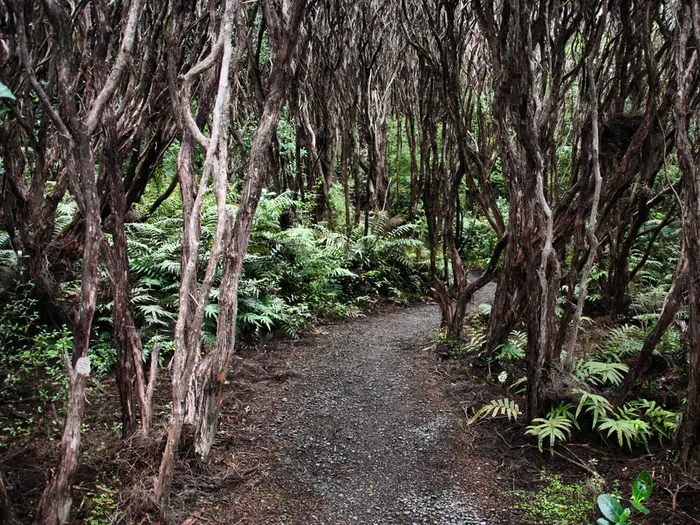 Rātā is one of the species of evergreen myrtle trees that are peculiar to New Zealand. The dark and curved trees growing on the North Island play a vital role in bird ecology. They are rarely more than 20 meters tall, and by Christmas they are covered in stunning red flowers. Real Christmas magic!