Wonders of modern architecture: 10 of the world’s strangest buildings 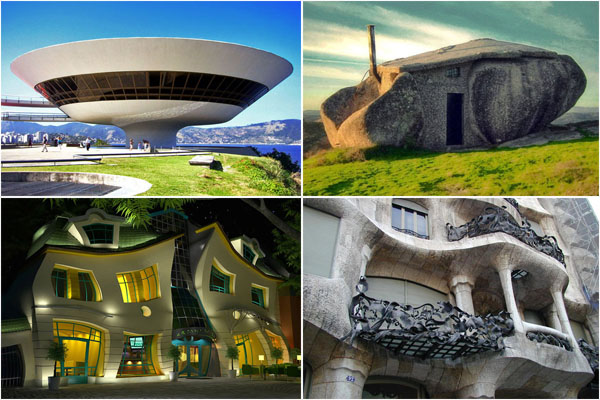 The world is filled with strange buildings resulting from unconventional architects’ attempts to express themselves with bricks and mortar. Skyscrapers, sky-scrapers bursting into the clouds and giant metal structures are common sights in almost every corner of the world. Here is an overview of the most amazing and strange buildings in the world. 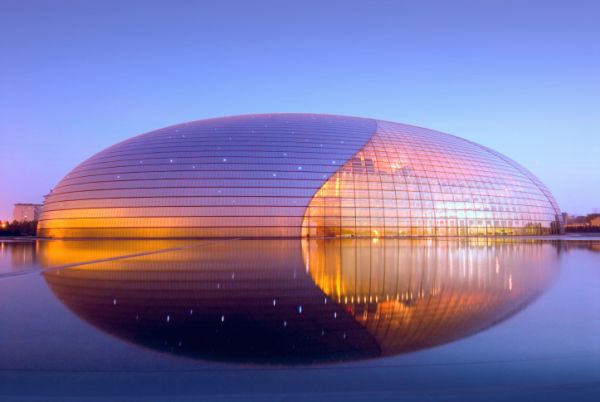 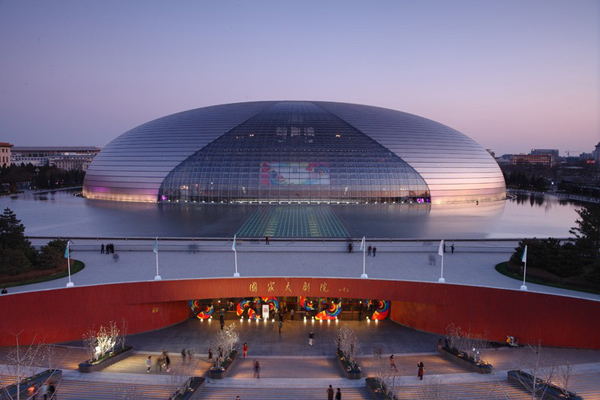 The National Center for the Performing Arts (National Opera Theater) is located in Beijing. The building made of glass and titanium is surrounded by an artificial lake. It was designed by French architect Paul Andreu. Construction began in 2001 and took six years. The first production was the Russian historical opera Prince Igor by Andrei Borodin, performed by the Mariinsky Theater orchestra, chorus and soloists, conducted by Valery Gergiev. The architectural complex includes the building, underground and underwater corridors, an underground parking lot, an artificial lake and greenery. For the construction of the main dome 18,000 plates of titanium and more than 1,200 sheets of glass were used, its length is 212 meters, width 144 meters, height 46 meters. The underground part of the building goes to a depth of about 32.5 meters. The area of the entire complex is 118900 square meters. The three halls of the theater are 12,000 square meters and have a capacity of 5,452 spectators. 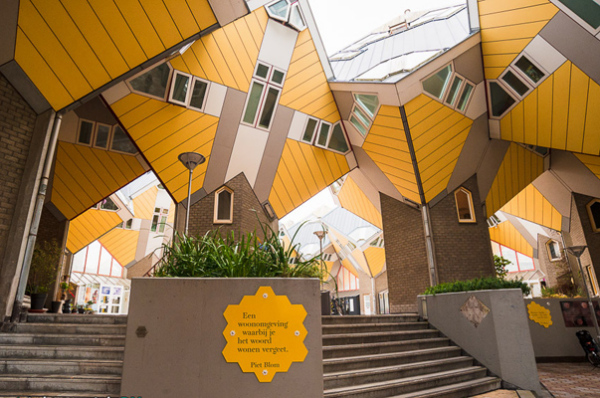 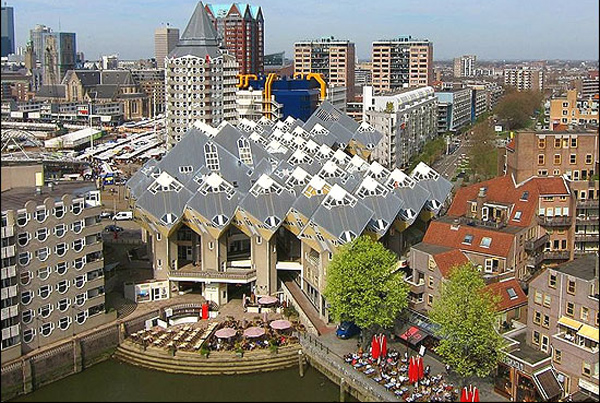 In Rotterdam and Helmond Cubist Houses you can find unusual, not to say strange, cubist houses. Piet Blom created them based on his desire to create a forest in the middle of the city, as trees the houses would grow. In 1984, a complex of 38 buildings appeared on Overblaak Street, striking in its appearance. 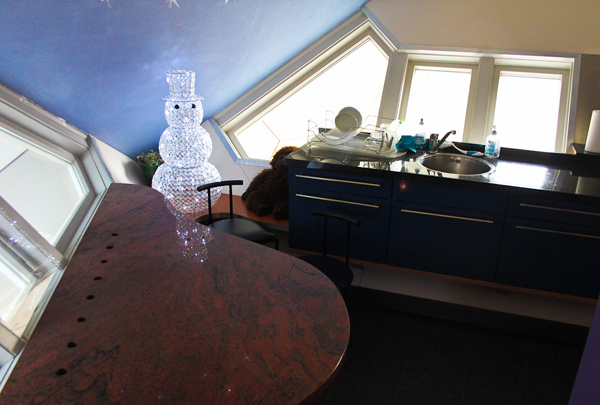 Each house consists of four floors. The first floors of the houses are mostly offices, barbershops, stores, etc. The area of the three-storey apartments is about 100 square meters, but the living space is much smaller, because the walls and floor are inclined at an angle of 54.7 degrees. Apartment layout is as follows: first floor – kitchen and living room, second floor – two bedrooms and a bathroom, the third floor is equipped with guest rooms, offices and winter gardens. 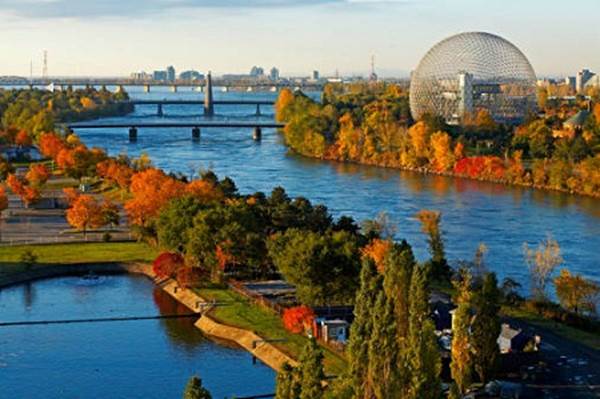 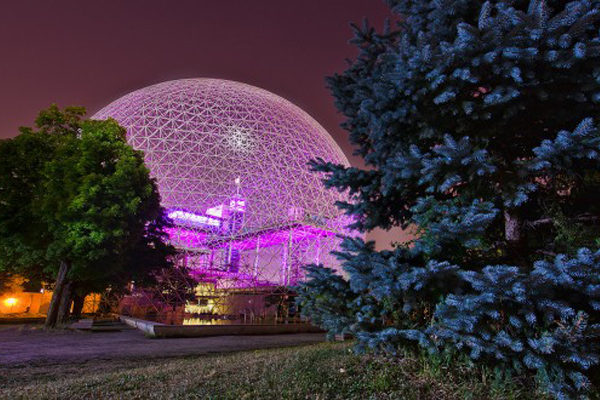 The Biosphere is a museum dedicated to environmental issues. It is located in Jean-Drapeau Park on St. Helena right in the middle of the St. Lawrence River. It was once the U.S. exhibit hall at Expo ’67. The structure, resembling a huge soap bubble, was so striking and original that they decided to keep it. The outer “shell” of the Biosphere is a dome 62 meters high and 76 meters in diameter. The author of the project, which brought its creator worldwide fame, is Richard Buckminster Fuller. 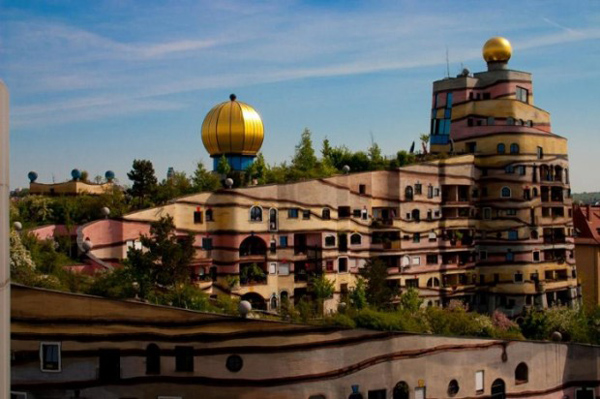 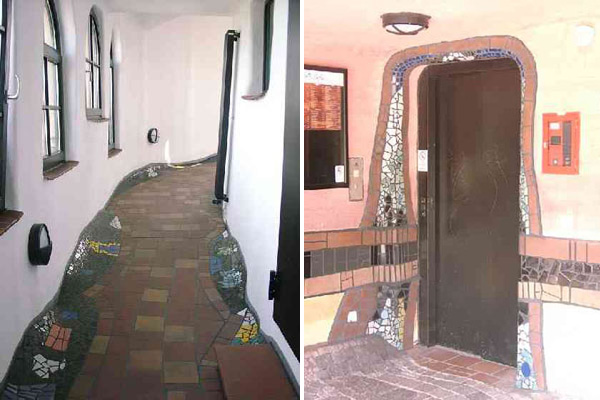 The Forest Spiral is a twelve-story apartment complex built in the 1990s. The author of the idea was the Austrian artist Friedensreich Hundertwasser, and the architect Heinz M. Springmann together with the company Bauverein Darmstadt brought it to life. Construction of the building lasted from 1998 to 2000. The “Forest Spiral” complex with its multicolored stanzas, curved facade, resembles a huge snail. The 1,048 windows of non-repeating sizes and shapes help to create the image of a fairy tale house. There are trees growing out of some of the windows, and the tenants are required to take care of them according to the lease agreement. The building has 105 apartments and a cozy courtyard with playgrounds, artificial lakes, shaped walkways and bridges, stores, parking and a pharmacy. 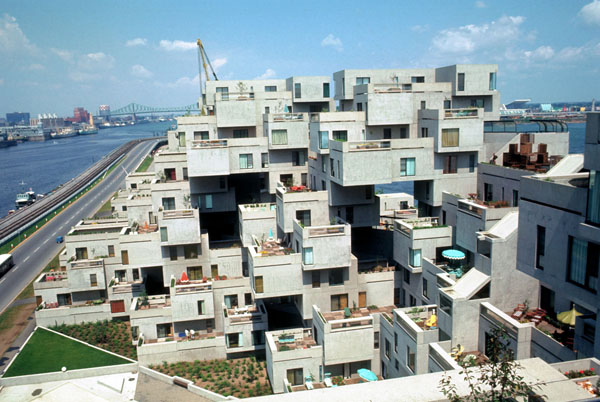 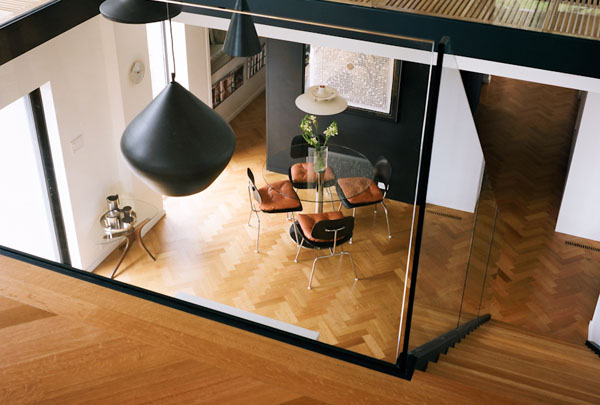 Habitat 67 is a residential complex created by Israeli-Canadian architect Moshe Safdie. It was his graduation project. It is located near the St. Lawrence River on Avenue Pierre-Dupuy. The house is recognized as a landmark of the city, and indeed the country as a whole. Reminds building construction of cubes for children, however, it is absolutely reliable and comfortable for housing. For a house of 146 apartments you need 354 cubes stacked on top of each other. Each apartment has several such cubes, up to five of them. All the apartments have a view of the three sides of the world and enjoy views of the Montreal harbour. The more so that the house provides a lot of open terraces, glazed transitions. 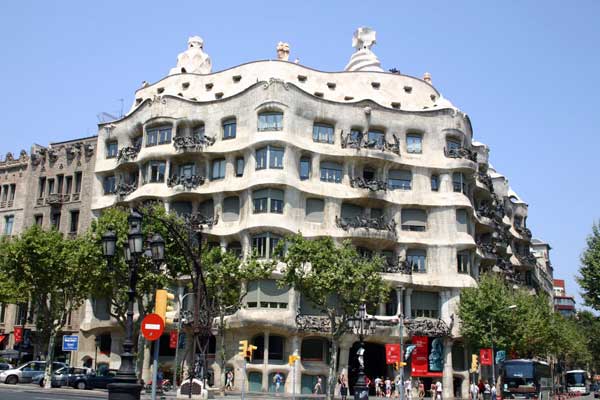 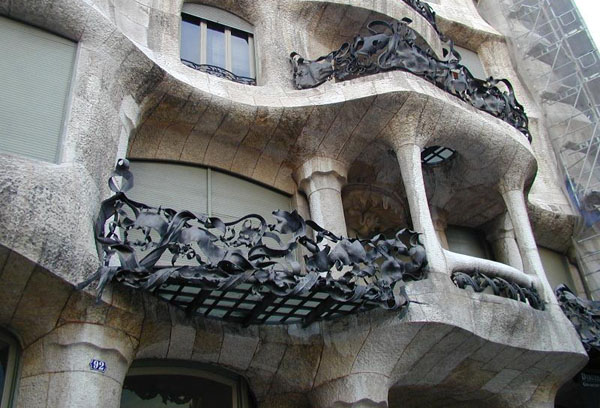 Another building known as Casa Mila is located in Barcelona, the capital of Catalonia. The Catalan architect Antoni Gaudi built it in 1906-1912 for a couple. The house is amazing and remarkable in that there is not a single straight line in it. It was an ambiguous design for the time, the bold shapes of the undulating stone facade and the wrought iron balcony decorations and windows, created mainly by Jose Maria Jujol, who also designed some of the plaster ceilings. The house is a UNESCO World Heritage Site. Visitors can go up to the top floor, attic and roof and take a close look at this masterpiece.

The Museum of Modern Art is located in the Brazilian city of Niteroi and is one of the main local attractions. The building looks like an unidentified space object from unknown worlds. It was built in 1996 by Oscar Niemeiro and Bruno Contarini. The height of the building is 16 meters, the diameter of the dome is 50 meters and the supports are 9 meters. The area is 817 square meters. 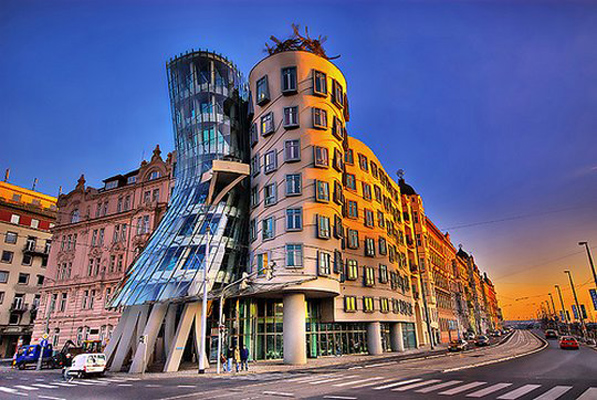 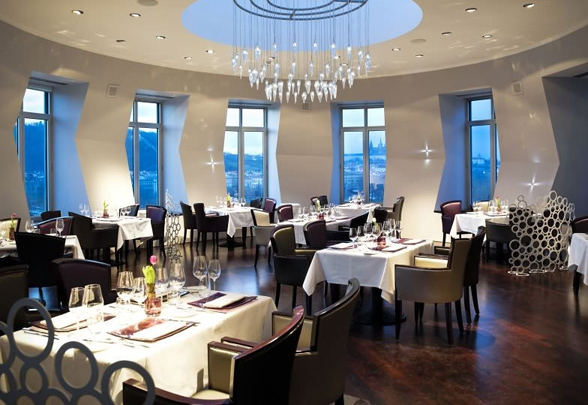 Dancing House or “Fred and Ginger” is the name of the building in Prague built by Czech architect Vlado Milunich and Canadian architect Frank Gehry. An amazing masterpiece depicting a dancing couple. Although the house is built in a deconstructivist style, the authors themselves describe it as an example of the New Baroque. It is an office building with a French restaurant on the top floor. 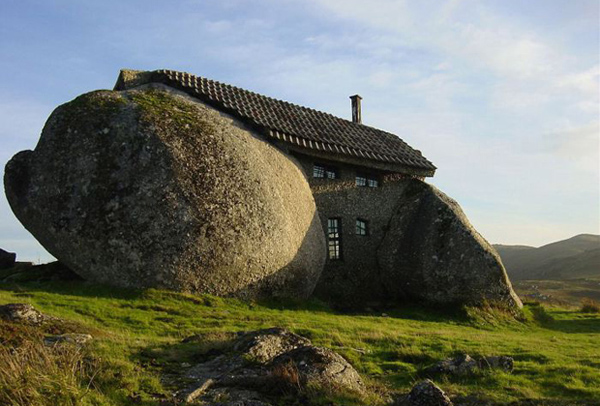 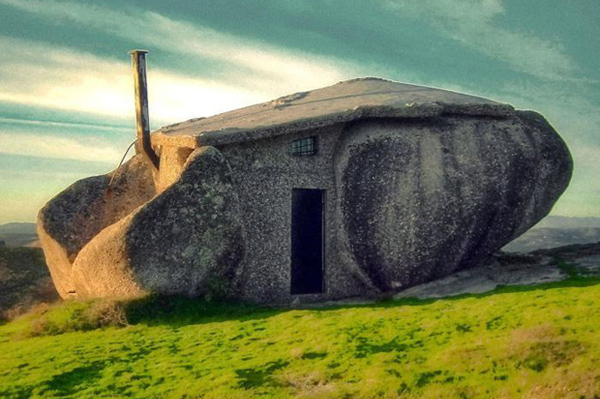 The stone house in the north of Portugal in the mountains of Fafi resembles the dwelling of the Flintstones from an American cartoon. Two huge boulders were used as the foundation of the house and cemented together with concrete mortar. The result in 1974 was a two-story prehistoric style house with a fireplace, swimming pool, attracting thousands of tourists. 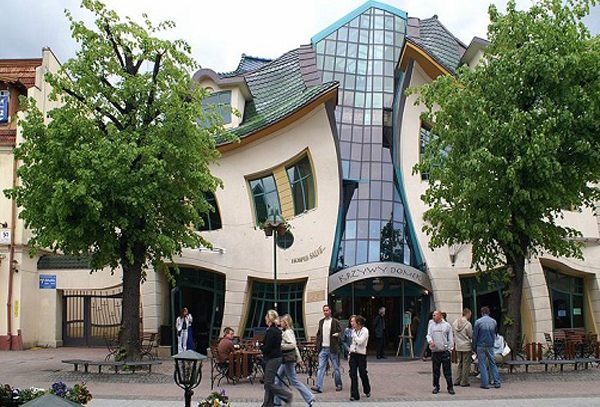 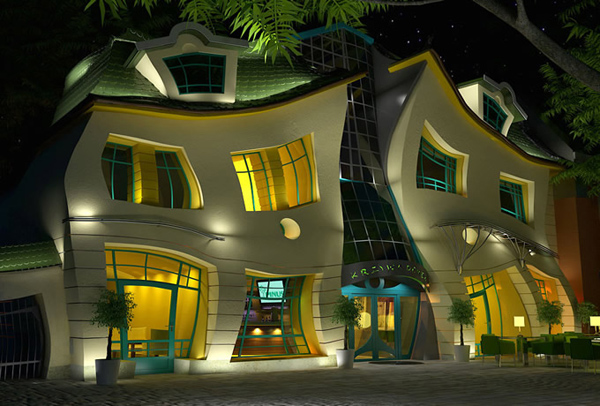 The shopping center in Sopot attracts not only shoppers, but also thousands of tourists. And it’s all thanks to its unusual appearance – no straight lines or corners. The crooked house was built in 2004 by architects Szotyńscy & Zaleski, inspired by fairy-tale drawings and illustrations by Jan Marcin Szancer and Per Dahlberg. The area is approximately 4,000 square meters. There are small stores, cafes and restaurants. The mall occupies the first floor, and on the second floor are the offices of two radio companies. Contemporary architects are building original houses not only on land, they have begun to conquer and water bodies of all sizes, offering projects of floating houses.