Top 10 most beautiful libraries in the world

Our fast-paced cities sometimes lack so much tranquility. It seems that we have gone head over heels in technology and have grown attached to our gadgets. Luckily there are still places on earth that are timeless. We present you 10 of the most beautiful libraries in the world, in the walls of which history comes to life.

The library of Admont Abbey 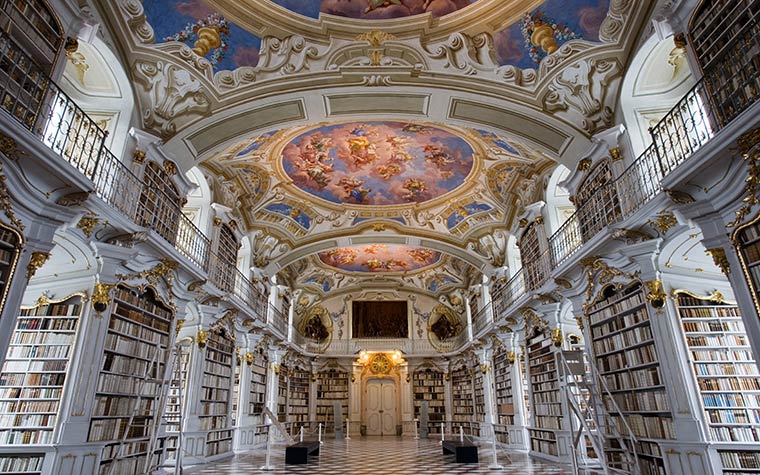 Unexpectedly in the Austrian hinterland stands the largest and most beautiful abbey library in the world. The spacious and bright Baroque hall seems to plunge the visitor into a fairy tale. The Baroque is considered the age of Reason and Enlightenment, and here it is felt in full measure.

Frescoes by Bartolomeo Altomonte (the artist was 82 at the time of his creation!), depicting various stages of the formation of the human mind, look down on readers from the ceilings. The library is famous for its huge collection of volumes and manuscripts, the most valuable of which date back to the 8th century AD.

The abbey itself was founded as far back as 1074. It was active in the Middle Ages and served as a religious and educational center. Its magnificent library took on its final form in 1776 and now welcomes visitors from all over the world. 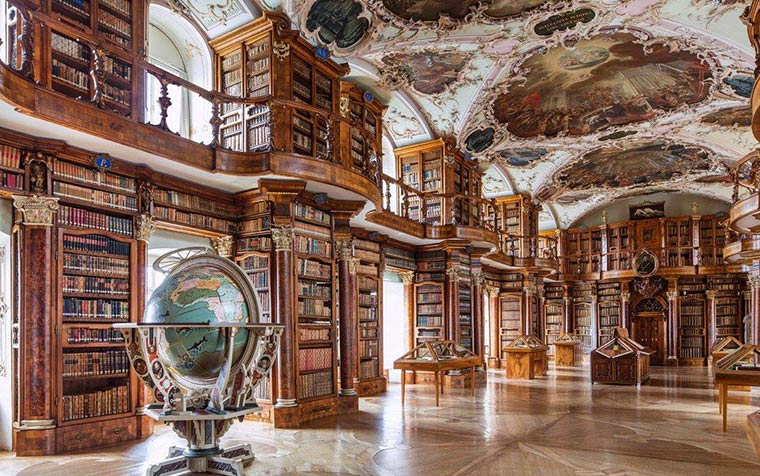 The St. Gallen library, recognized by UNESCO, is an architectural masterpiece. It has a beautiful Rococo decoration with elegant frescos and playful cherubs. The oldest and most beautiful library in Switzerland has about 170,000 books and valuable manuscripts, many of which are over 1,000 years old. The library is famous, among other things, for one of the most highly regarded literary works, the 12th century Germanic epic “The Song of the Nibelungs”.

The library is open to the public and allows guests to peruse almost any work. However, special attention is paid to copies published before the 20th century – the most sophisticated readers can see them in a specially designated room.

READ
Haunted castles of the world 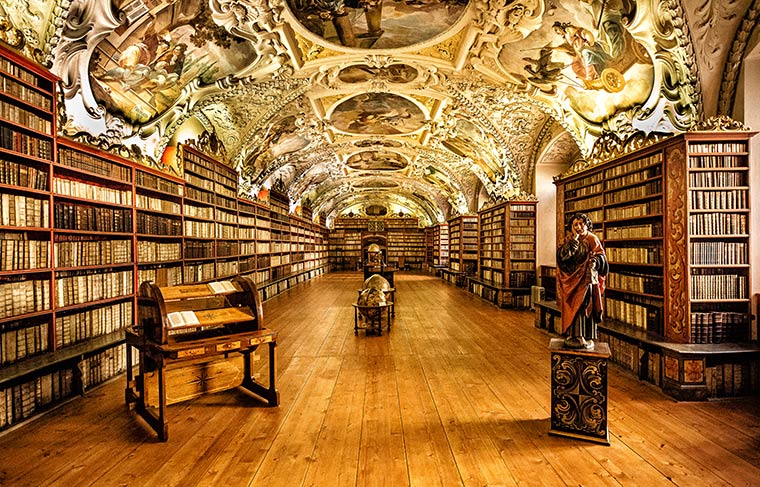 Prague delights connoisseurs of architecture as well as gourmets, and fans of craft beer here simply rejoice. But there’s a place in the city that beckons with mysteries of the past. Strahov Monastery gave one of the most beautiful libraries to Bohemia and the whole world. The book repository boasts a huge collection of volumes, ancient maps and manuscripts. There is a baroque theological hall, a philosophers’ hall and a room of curiosities, all of which are open to visitors.

During its history, the famous monastery has changed as many as three architectural styles: first because a monk fell asleep over a candle and then because of political manipulation. All these changes had time to affect the library, which makes its history truly unique. 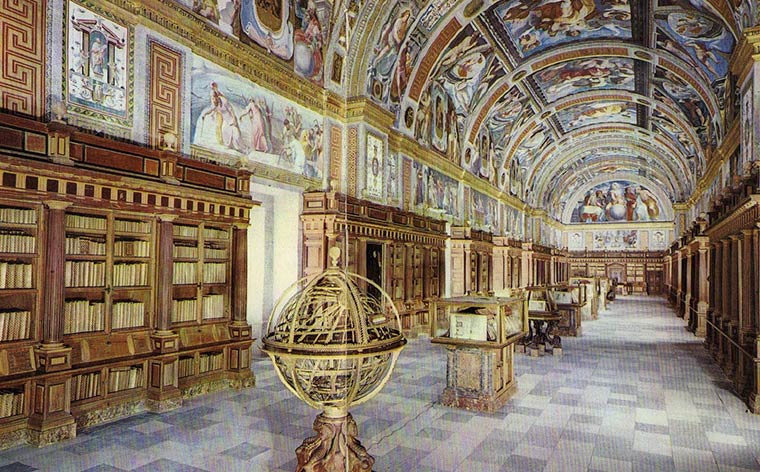 The royal library was built in the 16th century by order of Philip II, who was imbued with a love of literature and philosophy from his childhood. The king read books on any subject – be they ancient works, medieval treatises or even the Koran, which was taboo in the royal family. It was only natural that Philip should create his own library, and he succeeded.

It is known that the Spanish king invited Italian masters from the Vatican in order to learn from them the secrets of decoration. The Escorial library is the only one in the world where all the folios are turned inside out. This was done to preserve the decorations of the bindings, but it is believed that Philip wanted to hide the forbidden books from unwanted eyes in this way.

The famous place is still open today and any visitor can enjoy its rich collection. 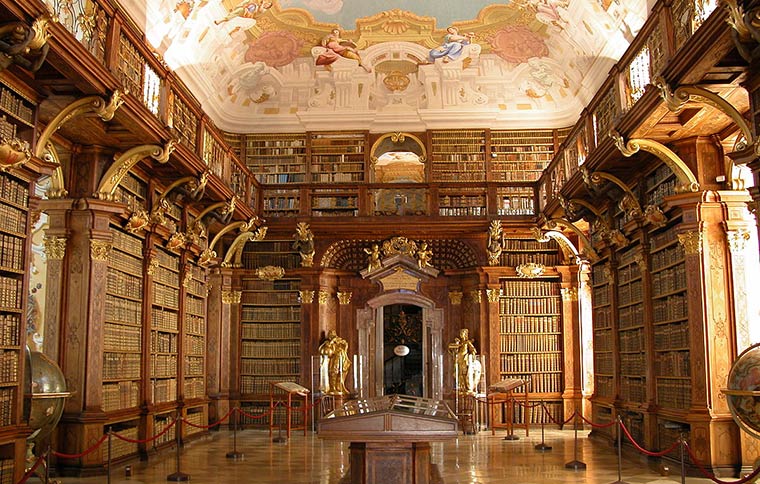 If you’ve read the detective novel The Name of the Rose, or watched the movie of the same name starring Sean Connery, it’s easy to imagine what served as the prototype for the famous place. Twelve themed rooms, hidden doors in shelves, dark wood decorated with intarsia, beautiful frescoes, hundreds of manuscripts – what astonishingly beautiful Melk Abbey library doesn’t surprise the visitor. There’s also the scriptorium, where Benedictine monks toiled tirelessly to duplicate valuable manuscripts. Now you can immerse yourself in a medieval world and learn more about the abbey by booking a guided tour, which will tell you all the secrets of the past. It is said that the local monks make an excellent Pinot Noir.

READ
10 Things to do in Inverness, Scotland

6. National Library of the Czech Republic 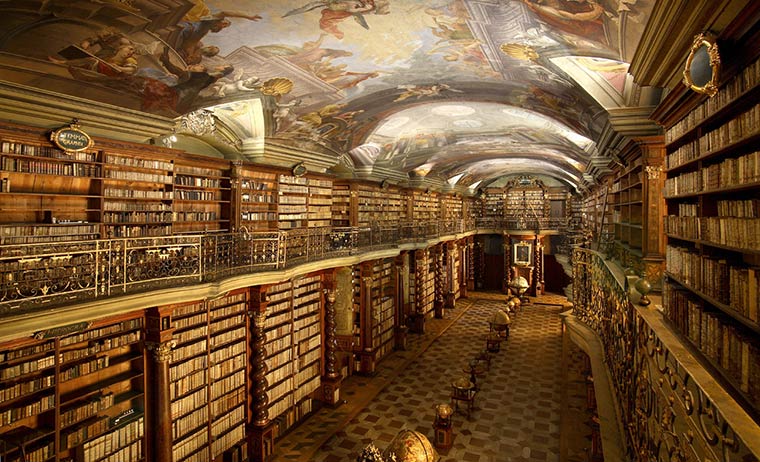 And off we go again to the Czech Republic, this time to the central library, located in the complex building of the Jesuit College or Clementinum. It is simply impossible to pass by this place. Located near the famous Charles Bridge, the library is a Baroque creation. The impressive 20,000 square meter area of the college contains 7 million literary works by local writers, as well as masters from Turkey, Iran, India and other countries. The library has about 60,000 registered readers and in 2005 it was awarded the UNESCO Prize for an ambitious project that digitized 1,700 ancient documents. 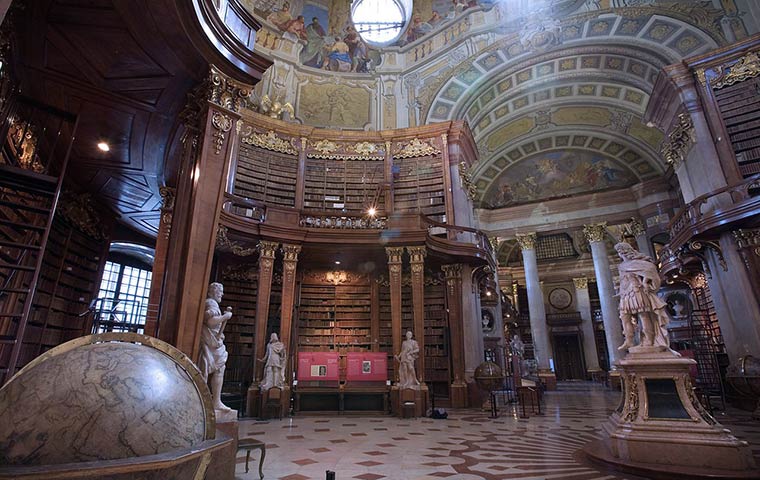 The former imperial library with a truly imperial collection. Founded by Duke Albrecht III in the 18th century, the library’s shelves have been filled with priceless and diverse items ever since. From 15th century BC papyrus to the works of the courageous Generalissimo Eugene of Savoy and the manuscripts of the great Protestant reformer Martin Luther. The library has a total of 7.5 million books by Austrian and foreign authors. The graceful style and size of the main hall is astounding: 80 meters long and 20 meters wide. The main hall, the photo archives, the music archives and the three museums, one of which presents a complete Esperanto collection, are open to the public. 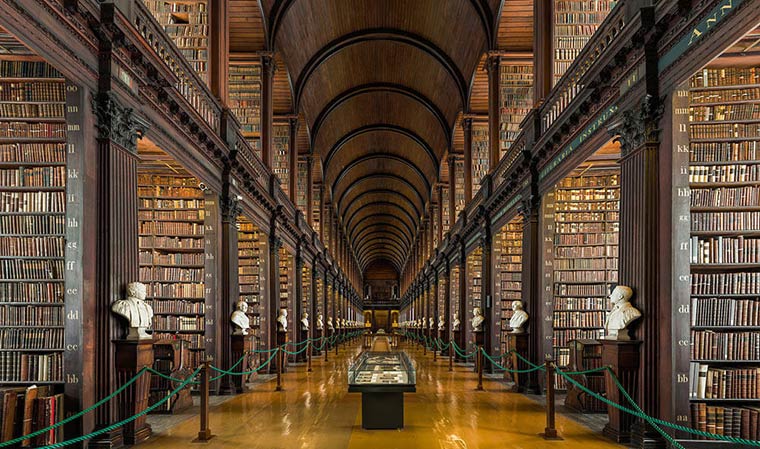 How about strolling down the 65-meter corridor along the countless works of the chroniclers of the past? They say the smell of books in this beautiful library is extraordinary. But Trinity College’s library isn’t just famous for its Long Room. Its walls hold one of the oldest copies of the Bible, the Book of Kells. Created in the 8th century by Celtic monks, the book is lavishly decorated with beautiful illustrations. The book is considered one of Ireland’s most significant works of art and a source of national pride. Every day tourists, students and college professors can enjoy the rich atmosphere of the library. Also Monday through Friday at 3 p.m., local guides give a short lecture about the history of Dublin’s most famous book repository, available to all visitors.

READ
Singapore from A to Z: useful information for tourists 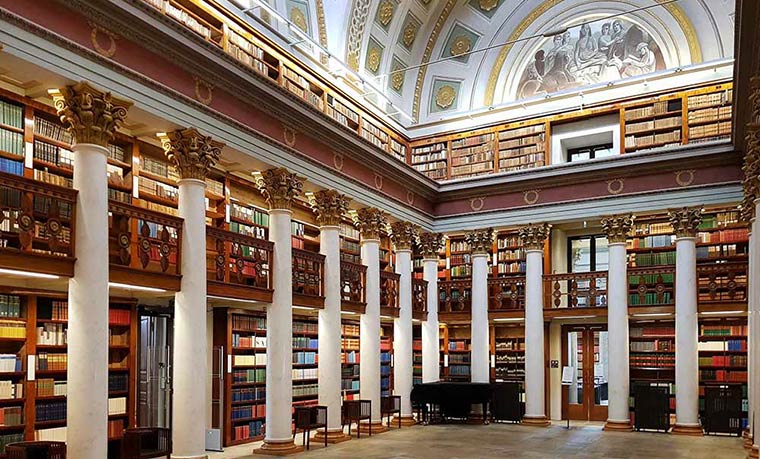 Finland’s oldest and most beautiful library, serving as a university and national library. Throughout its history it has accumulated many exclusive titles. Book repository has one of the most valuable and rarest collections of books from the time of the Russian Empire. The architecture of the building, built according to the plans and drawings by architect Carl Ludwig Engel, deserves special attention. 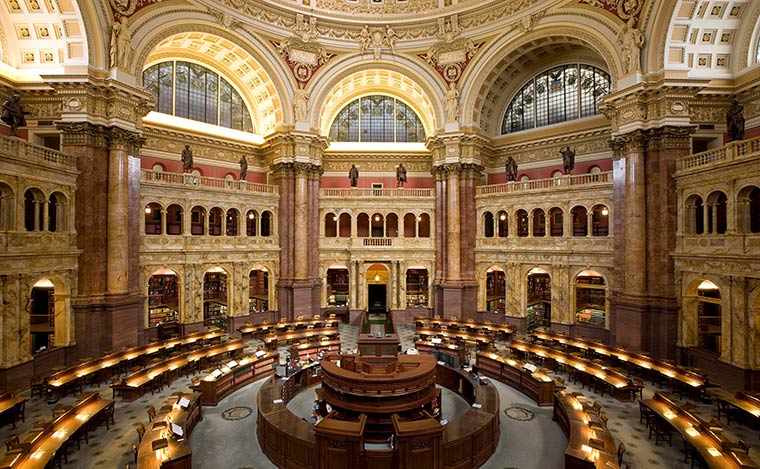 The largest library in the world completes our list. Its mighty walls of marble and granite hold 167 million items. Here you’ll find printed works in 470 languages, great collections of Russian, Chinese and Japanese literature and even a recipe for pancakes by the famous activist Rosa Parks, but that’s another story altogether. Every year, the library adds at least a million new items to its collection. And it’s all digitized. Impressive.

The Book Palace itself was founded by President John Adams on April 14, 1800, the day it was decided to move the capital of the United States from Philadelphia to Washington. The library is free to the public and hosts many interesting events.