The 10 most beautiful lakes in the world

Lakes show us some of the most mesmerizing qualities of water thanks to their motionless smoothness and various shades of color. And the world’s most beautiful lakes are true works of art from generous Mother Nature. Although they may have different names (lake, lagoon, reservoir), they are all equally stunning and worth visiting. 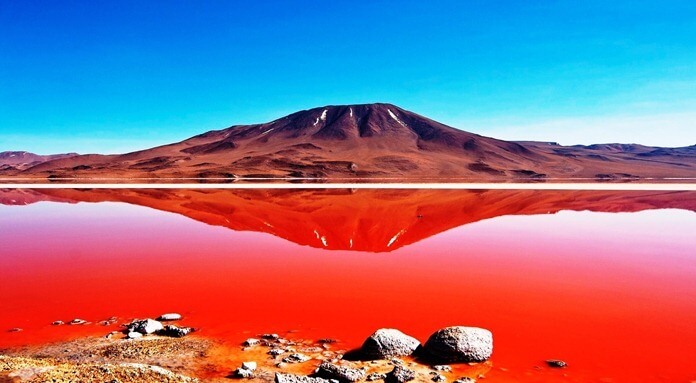 Folklore attributes the scarlet color of Laguna Colorado’s water to the spilled blood of the gods. However, this mineral lake got such an unusual hue because of the presence of red algae. The flamingos that come to the lake also contribute their share to the various shades of red. The Colorado Lagoon is surrounded by volcanoes, hot springs, and bizarre rock formations. The largest lake in South America and the highest navigable lake in the world (3,821 meters above sea level) is a place of sparkling blue water, cozy villages, and snow-capped mountains. It is very popular with tourists and is home to the Uros tribe, who create entire islands of reeds. These islands do not “wander” around the lake from place to place, they are attached to a large rock or log stuck in the bottom. 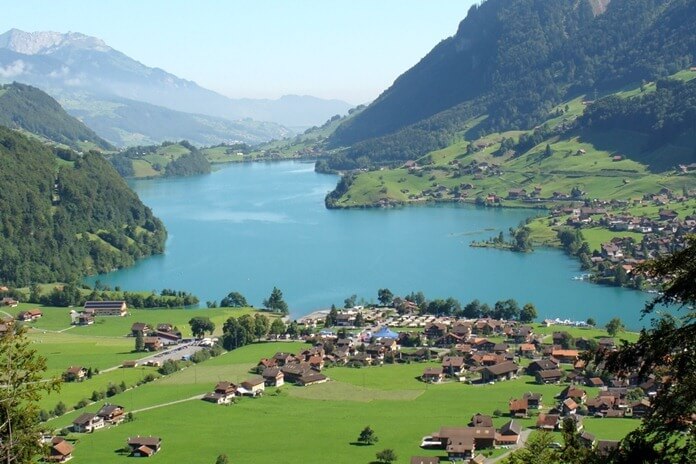 If you are heading from Geneva airport to the Swiss Alps, you will have the pleasure of seeing one of the most beautiful lakes on earth. 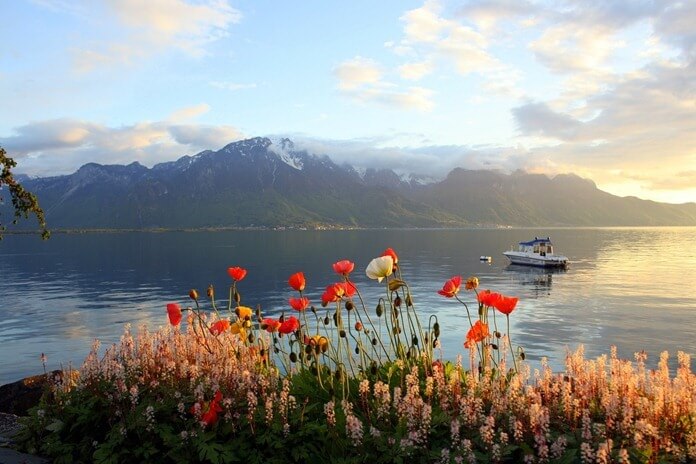 The events associated with it, as well as the lovely views, have inspired many creative natures. Among them: the artist Michael Erassi, the band Deep Purple (the song Smoke on the Water) and the “mother of Frankenstein’s monster,” the writer Mary Shelley. 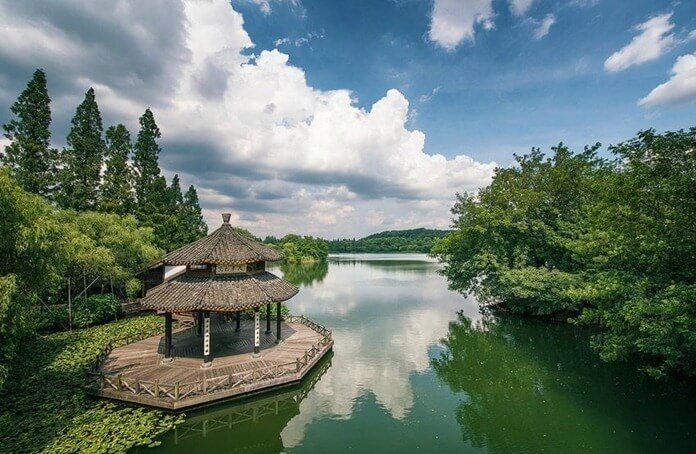 One of the most beautiful lakes in the world and the surrounding area in Hangzhou City has been a UNESCO World Heritage Site since 2011. The organization states that Xihu Lake has “inspired famous poets, scientists, and artists since the 9th century.”

READ
Travel to Belgian cities and towns, history and sightseeing 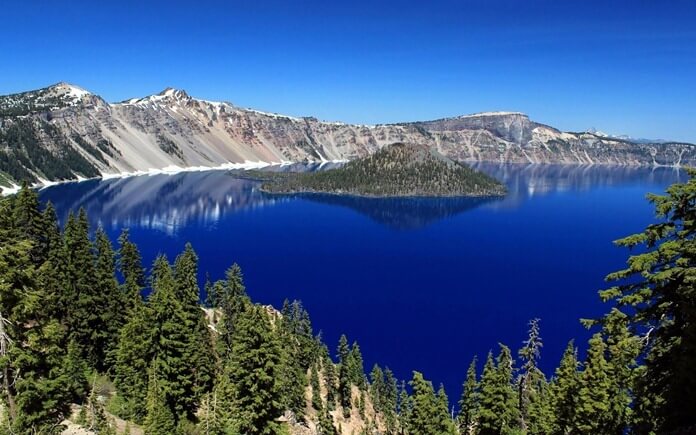 This crater lake is the deepest in the United States (594 meters). It was formed in the crater of the now inactive Mazama Volcano and consists entirely of glacial runoff and precipitation, making it clear and deep blue. 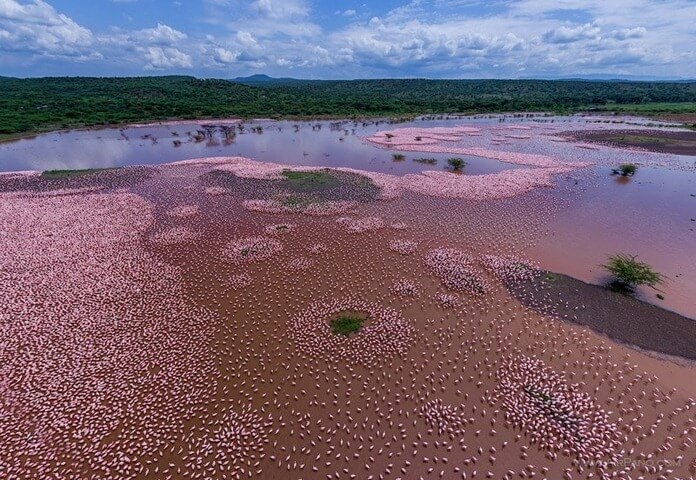 One of the top five most beautiful lakes in the world is a place that is beloved by hundreds of flamingos. It’s also not uncommon to see lions and leopards there. Rising water levels in the Nakuru over the past few years have led to a drop in the number of pink birds. However, the area is still a very popular attraction because of the variety of fauna it attracts. It is protected under the Ramsar Convention on Wetlands. 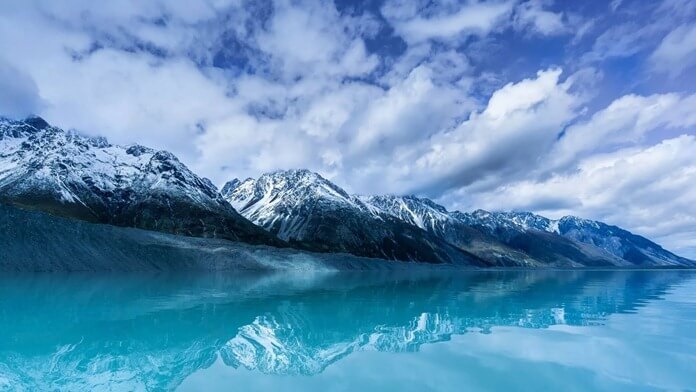 Some of the lakes may have water in more than one aggregate state. And a striking example of this in every sense is Lake Tasman, located in the heart of Mount Cook National Park, at the foot of the Tasman Glacier. The lake, in fact, appeared as a result of a relatively recent northward retreat of the glacier. 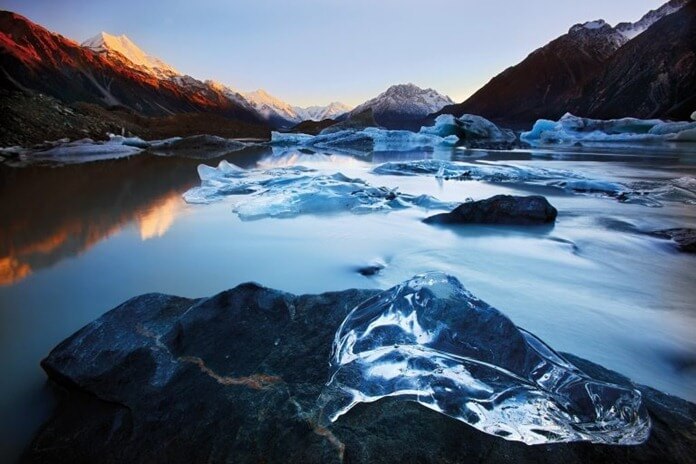 Boulders of ice regularly fall into the Tasman, there they “hide” for several weeks in the form of icebergs, and gradually melt away. Visitors to the national park can book day tours of the lake in special boats, which will maneuver between the icebergs, skirting the sharp edges and allowing you to enjoy this rapidly disappearing beauty. A boat trip on freshwater Inle Lake is one of the best things about visiting Burma. And not just because of the beauty of the lake itself. The local paddlers have an original paddling technique – they hold the oar with one foot. 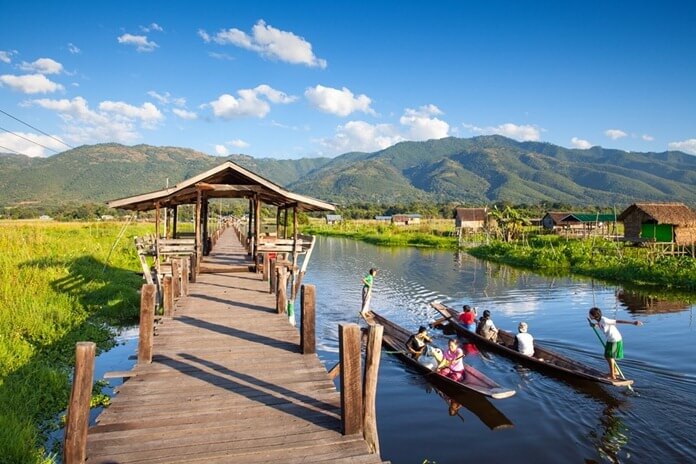 Also on the lake operates a floating market where you can buy handicrafts, silver jewelry, textiles and other products. And the local population grows food on floating vegetable gardens. These are mini-islands made up of fertile marshland. They are held in place by sharp poles. 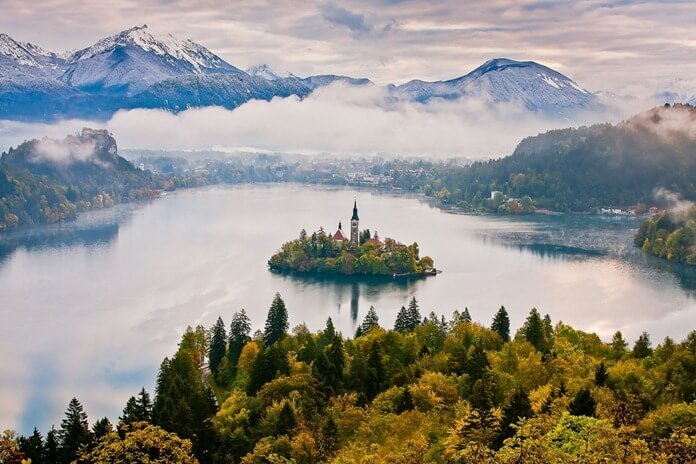 Clear cobalt-blue water, beautiful views of the Julian Alps and the fabulous St. Mary’s Church on a tiny teardrop-shaped island are three reasons why Lake Blejsko is one of the best tourist spots in Slovenia.

The church is home to the “wishing bell”, which not only single tourists, but also newlyweds want to ring, because the St. Mary’s Church is a very popular place for weddings. 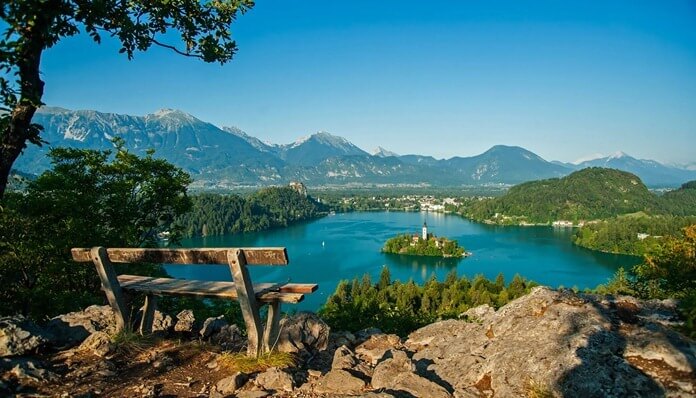 Above the lake on a steep cliff rises Bled Castle, another important landmark of the country. It was once the summer residence of Josip Broz Tito. 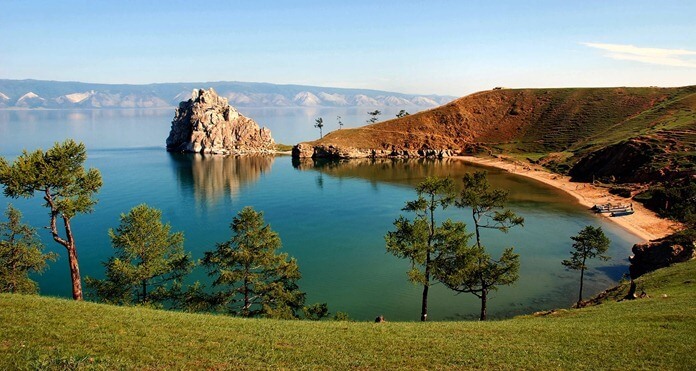 It is one of the most beautiful places in Russia and in the world. And Baikal is also the deepest lake on earth – in some places it reaches a depth of 1,642 meters. Its clear water is inhabited by many species of fauna not found anywhere else in the world. For example, the lake is a home for the unique freshwater Baikal seal, a relic of the Tertiary epoch, which survived to our days by some miracle. 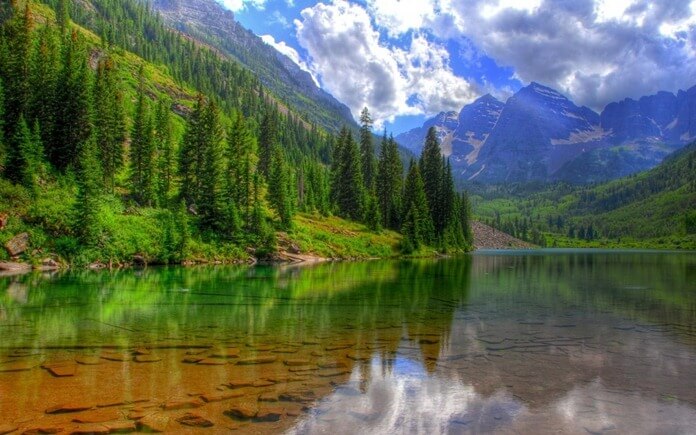 Top 10: The most beautiful lakes in the world 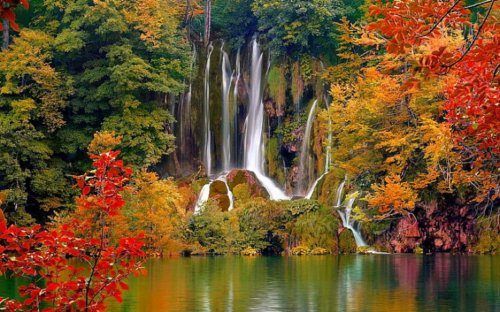 We present you the top 10 most beautiful lakes in the world. 1. Plitvice Lakes, Croatia. 16 crystal clear lakes connected by a system of waterfalls. Remarkable is the fact that new waterfalls on the lakes are formed every year. The reason is that the leaves and branches that have fallen into the water are covered with the so-called “chalky plants”, which, after dying off, become stony and turn into solid material, blocking the rivers. The water gradually breaks such dams, creating new waterfalls. 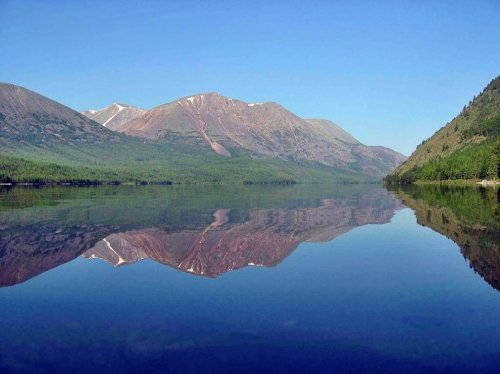 2. lake Baikal, Russia. The deepest lake in the world is also one of the most picturesque. The natural beauty of Baikal without visitors is best seen in early summer. At this time the ice on the lake begins to melt and you can see seals on the ice floes. 3. 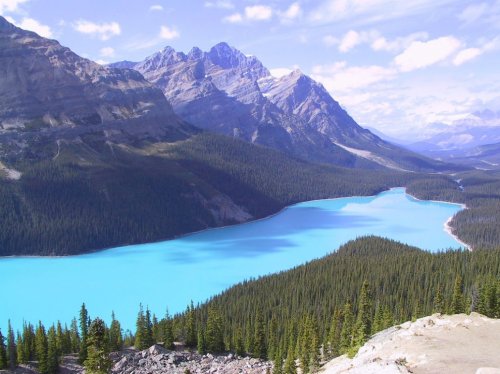 3. Peyto Lake, Canada. Photos of this lake are often used as landscape postcards. The incredible blue of the water is created by melting glaciers that wash rock into the lake. 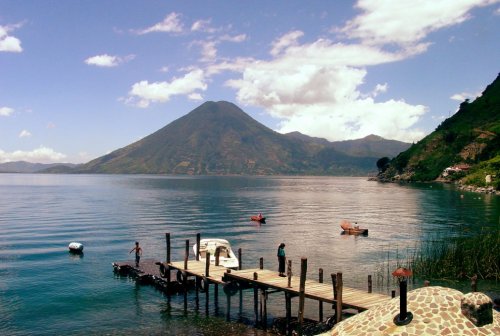 4. Lake Atitlán, Guatemala. Translated from the Mayan language, the lake’s name means “the place where the rainbow takes on color.” Located at the foot of three majestic volcanoes, the lake in recent years is changing its color from dark blue to blue-green. Experts say algae, which blooms all year round, is to blame. 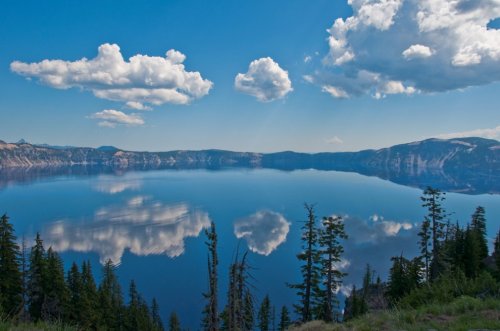 5. Crater Lake, USA. Formed over 7,000 years ago, the deepest lake in the States is the result of the collapse of Mount Mazama volcano. Today Crater is the center of a national park in southern Oregon and is surrounded by impenetrable forests and high cliffs. 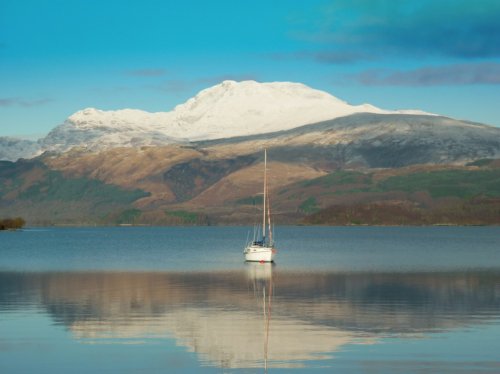 6. Loch Lomond Lake, Scotland. This is the largest freshwater Scottish lake, with a length of 24 miles and a width of 5 miles. There are a huge number of islets on the lake, some are so small that they hide under the water at high tides, and some are large enough to house entire hotels. 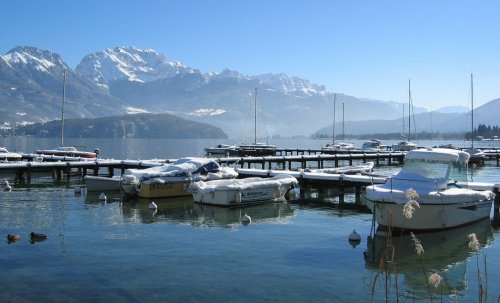 7. Lake Annecy. This is the heart of the French Alps. The place is suitable for absolutely all kinds of recreation: from romantic to extreme. Annecy is very popular with surfers and kayakers. On the shore of the lake are comfortable cafes and restaurants, a little further away you can see the medieval castles. By the way, the lake is 18 thousand years old. 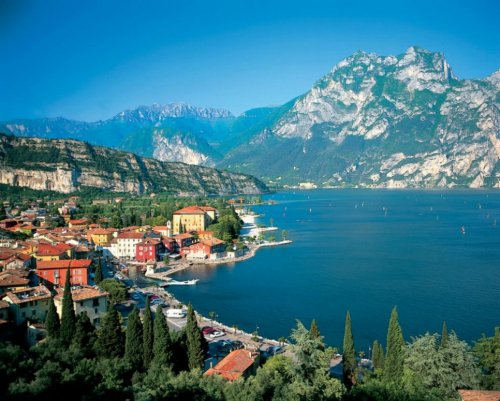 8. Lake Garda, Italy, sprawling at the foot of the Alps. This is the largest lake in Italy. It is located between Milan and Venice. On the south side of the lake are nice hotels, lodges and beaches. On the other side are the mountain ranges. 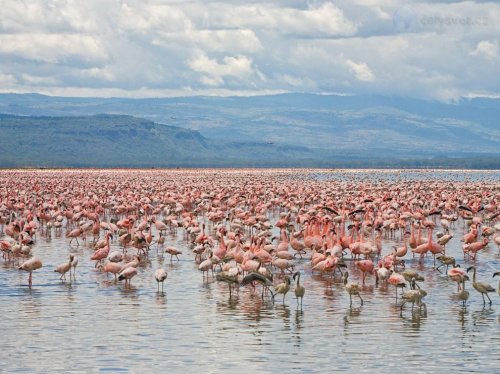 9. Lake Nakuru, Kenya. Because of the vast amount of algae in the lake, millions of flamingos come here. These pink birds are like pink islands covering the surface of the body of water. What is remarkable, flamingos are one of the few species of animals that can safely stay in Nakuru. This is because the lake water contains a high amount of carbon dioxide sodium, which can also burn. 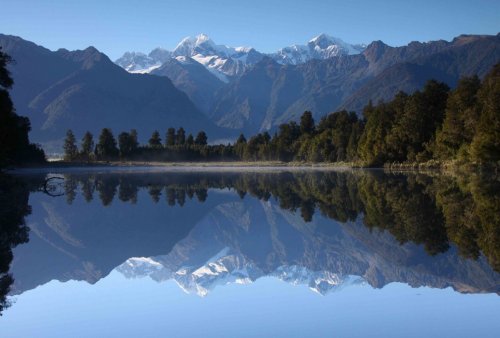 10. Lake Matheson, New Zealand. Otherwise known as Mirror Lake, the surface of the water reflects two of New Zealand’s highest points, Mt. Cooke and Mt. Tasman. The best time to admire this spectacle is after dawn, when the water surface truly resembles a mirror plane.