Gangtok, the capital city of Sikkim, is built on a cloudy ridge 5,500 feet above sea level. It is probably the cleanest city in India, which makes it a nice place to spend a few days touring and organizing and then traveling. If you are feeling like some pampering, one of India’s best Himalayan resorts is located in Gangtok. It also has a casino.

Many of the places to visit in Gangtke can be seen on the ubiquitous “three dot”, “five dot”, and “seven dot” local tours offered by travel agents, hotels and cab drivers. The “three dot” tours include the city’s three main viewpoints (Ganesh Tok, Hanuman Tok, and Tashi Viewpoint). Options such as Enchey Monastery can be added for “point” five tours. “Seven point” tours include monasteries outside of Gangtok, such as Rumteke and Lingdum. 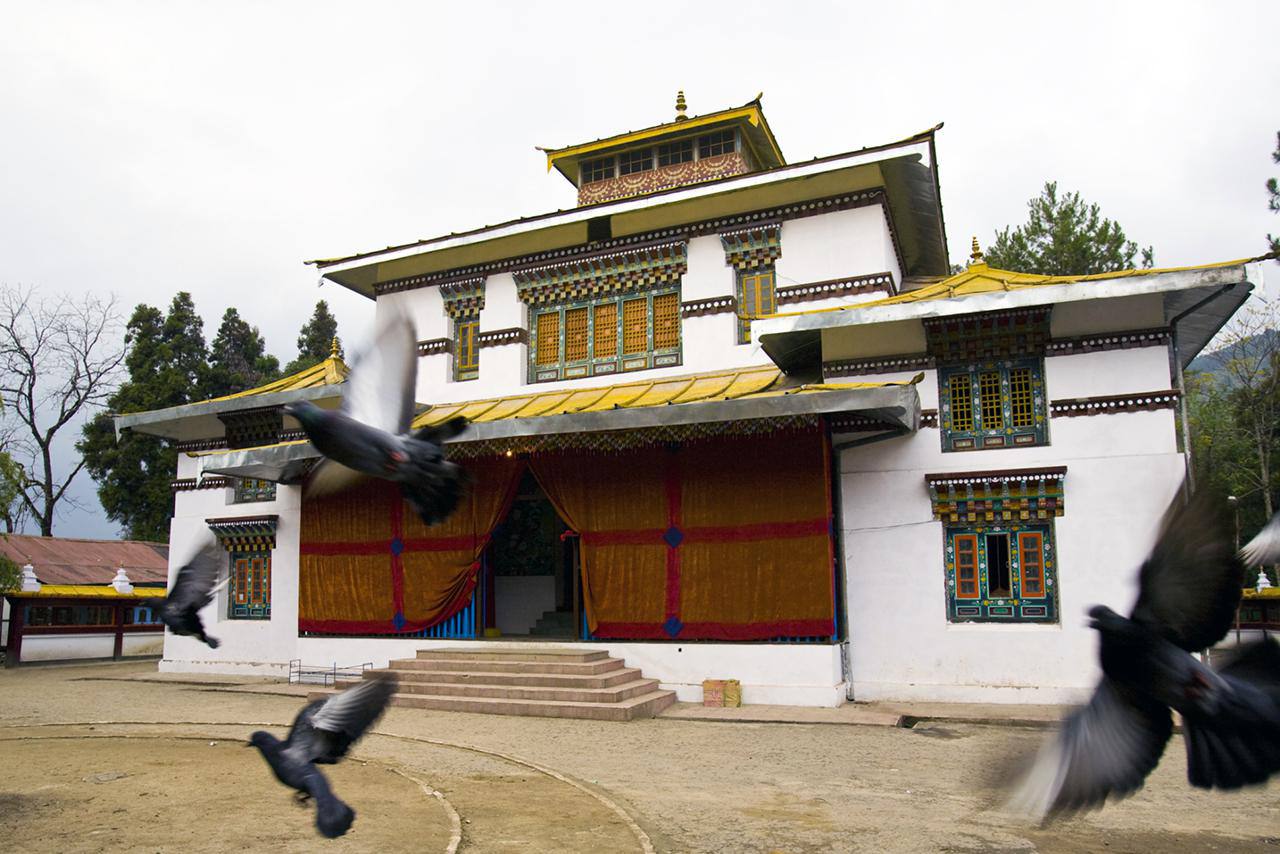 Sikkim’s monasteries are some of the most popular attractions. You will find Enchey monastery located on the ridge above Gangtok. The name of this tranquil place means lonely monastery . It was originally built in 1909 but had to be restored after it caught fire in 1947. This monastery is relatively small and non-commercial. However, it is beautifully decorated inside, with colorful frescoes, statues and a large collection of masks used in ritual dances. The founder, Lama Druptob Karpo, was a tantric master known for his ability to levitate and fly!

Enchey monastery is open from 4 am to 4 pm Monday to Saturday, and until 1 pm on Sunday.

Two famous monasteries can also be seen on a scenic day trip from Gangtok: Rumtek, and the newer and more prominent Lingdum (Ranka) with its huge golden Buddha statue. Be at Lingdum at 7:30 or 3:30 pm to hear the monks chanting in unison is mesmerizing. 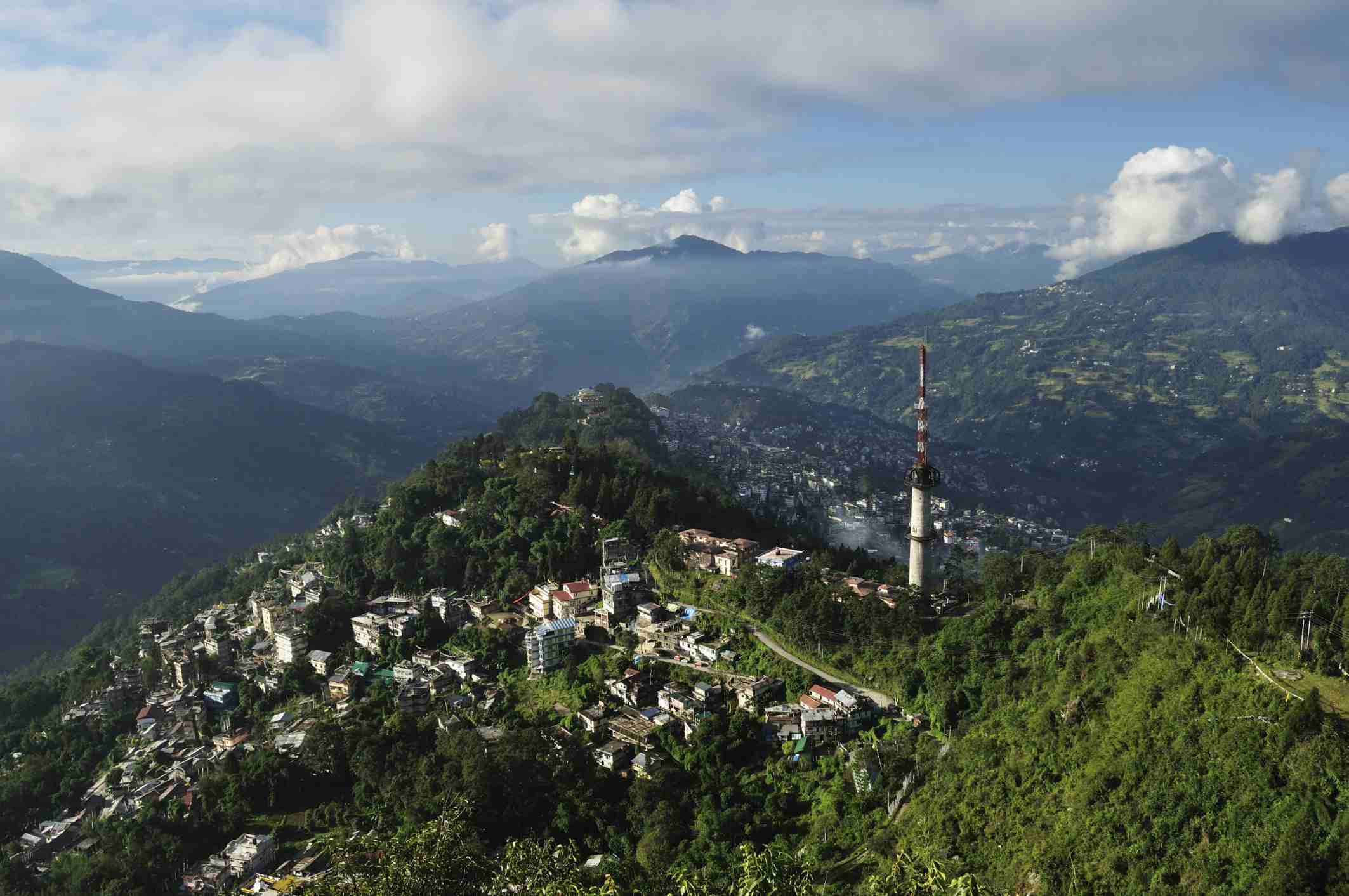 From Enchey Monastery, on your way northeast to the colorful Ganesh Tok with its waving prayer flags, to a dramatic view of Gangkok. There’s a temple dedicated to the god Ganesha there, along with cafes and souvenir stores. Higher up behind Ganesh Tok, and perhaps from a better vantage point, sits Hanuman Tok. Visitors are greeted by a towering orange statue of Lord Hanuman. Hanuman’s temple there is maintained by the Indian Army, so it is clean and peaceful. It is surrounded by beautiful gardens, sprawling hiking trails, and a magnificent view of Mount Khangchendzonga on a clear day. 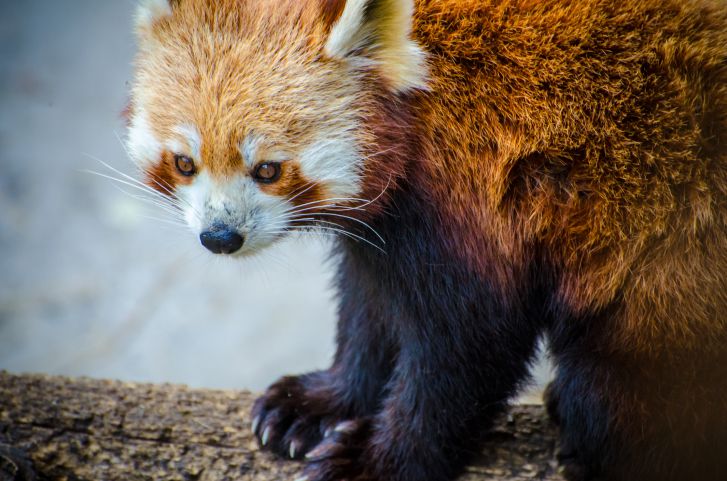 Opposite Ganesh Tok, the Himalayan Zoological Park is one of India’s best maintained jungle nature zoos. It spreads across 230 hectares of hillside and is home to rare animals, many of which have been rescued from traffickers and poachers. They include Himalayan bears, snow leopards, wolves, Tibetan and red pandas. 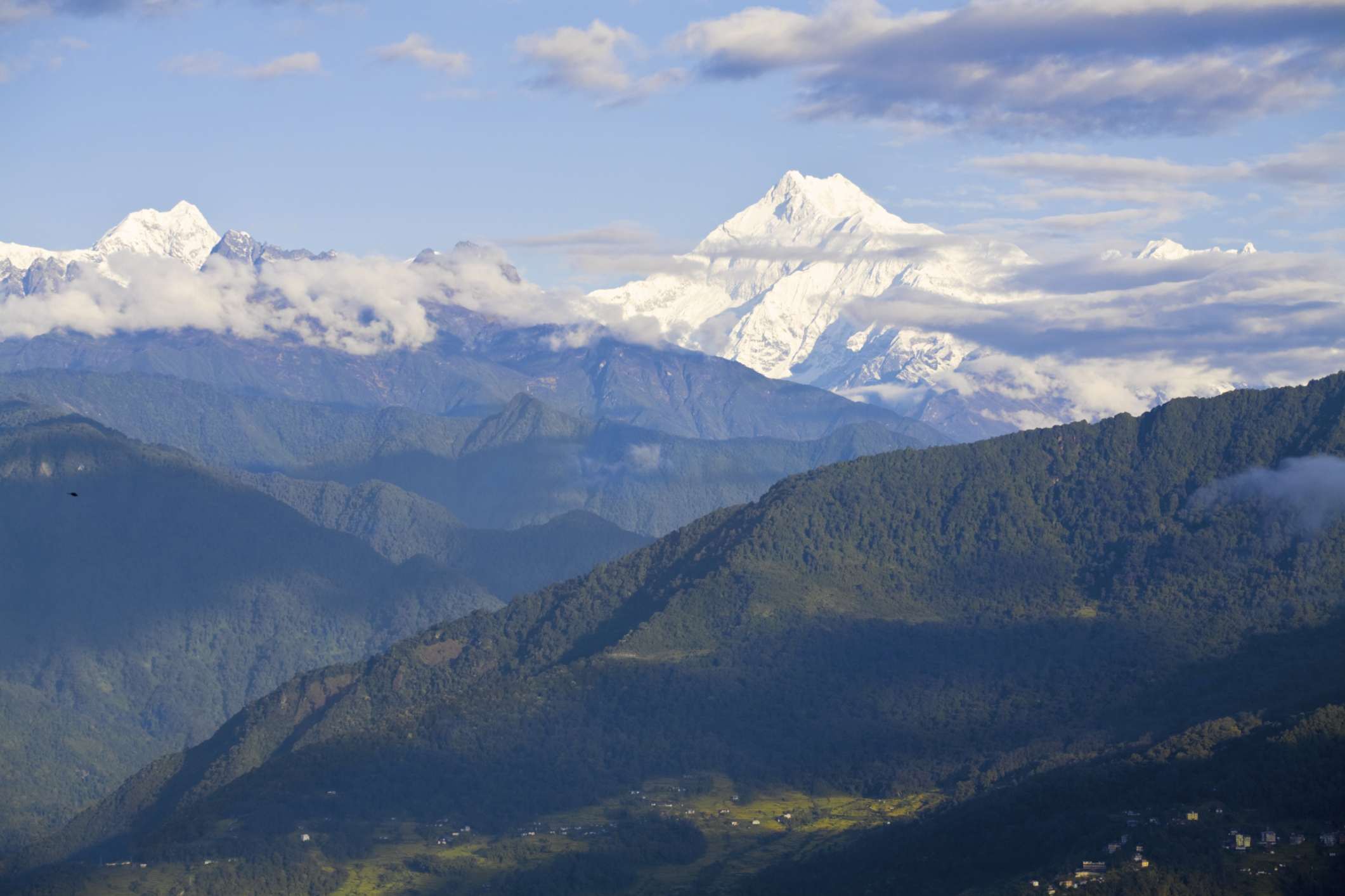 Tashi Viewpoint, north of town, is said to offer the best views of the Khangchendzonga Mountains in Gangtok. However, some people complain that it is not worth going up, and similar views can be found elsewhere. The views are very weather dependent and you are likely to be disappointed on a cloudy day. There are telescopes that you can pay to use, and a gift store on the side of the road that runs the Indian Army. Money from sales helps support it. 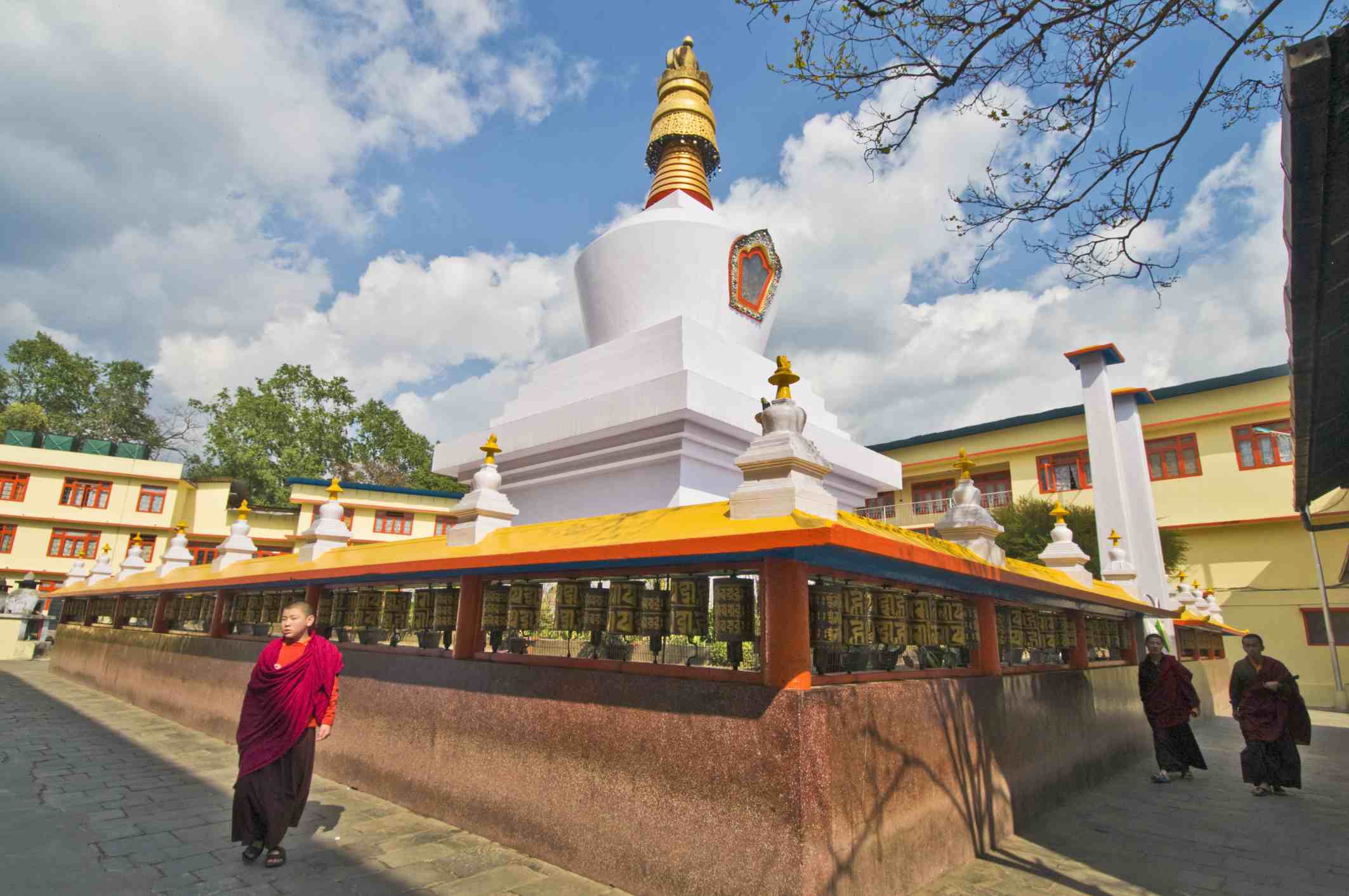 Those interested in Buddhism and Tibetan culture will find the Namgyal Institute of Tibetology worth exploring. Founded in 1958, its traditional Tibetan-style building is a museum and library with one of the largest collections of Tibetan works in the world outside of Tibet. The museum has a rare collection of statues, relics of monks, ritual objects (including a thöpa bowl made from a human skull and a kangling human thigh pipe), artworks, thanok (painted, woven and embroidered scrolls) and ancient manuscripts in Sanskrit, Tibetan, Chinese and Lepcha. There’s also a souvenir store and a cafe on site.

The institute is open from 10 a.m. to 4 p.m. Monday through Saturday. It is closed on Sundays, the second Saturday of each month, and official public holidays. The entrance fee is 10 rupees.

The brilliant white Do-Drul Chorten is located near the institute, on the same road. According to its fascinating history, this stupa was built by a powerful Tibetan lama who came to rid the site of the evil spirits that haunt it. It is surrounded by 108 prayer wheels, and at dusk hundreds of lamps are lit in the glass room beside it to guide the way of the deceased ancestors.

READ
The beauties of Azerbaijan: nature and architecture 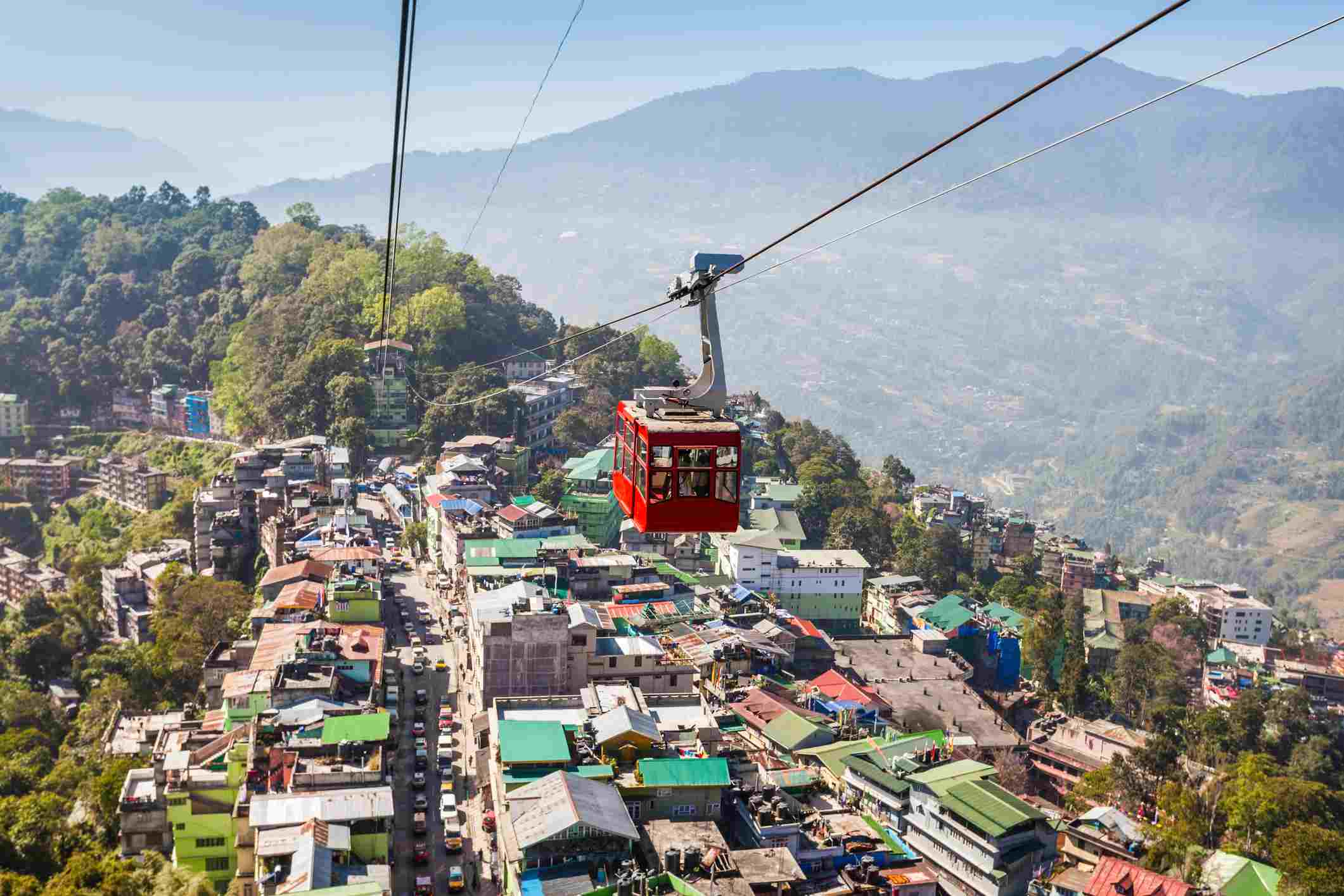 Near Namgyal Institute of Tibetology and Do-Drul Chorten, board one of the rope Damodarom Ropeway for a bird’s eye view of Gangtok and the surrounding valleys. It will take you high up the ridge to Secretariat Tashiling.

The Ropeway is open daily from 9.30am to 4.30pm Tickets cost Rs 110 per person and there are discounts for children. 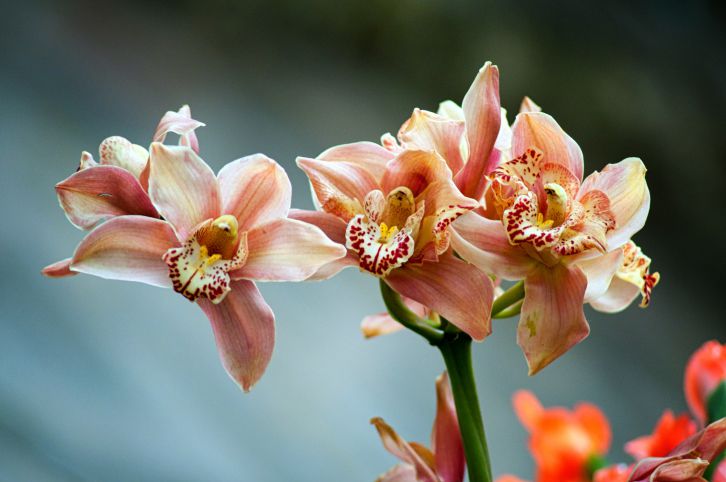 If you don’t visit Gangtok in April-June or September until late November, after disembarking by cable car at Secretariat Tashiling, take a stroll through Ridge Park and the Flower Show Center just below it. This greenhouse is sprawling with tall tall flowers, especially orchids. Orchid bulbs and seeds are also available for purchase there. It is open from 10am to 6pm and tickets cost Rs. 20 each.

Deorali Orchid Sanctuary, near Namgyal Institute of Tibetology, is another place to see exotic varieties.

Or stay at an orchid farm at one of India’s finest families in the Gangtok area, Hidden Forest Retreat. 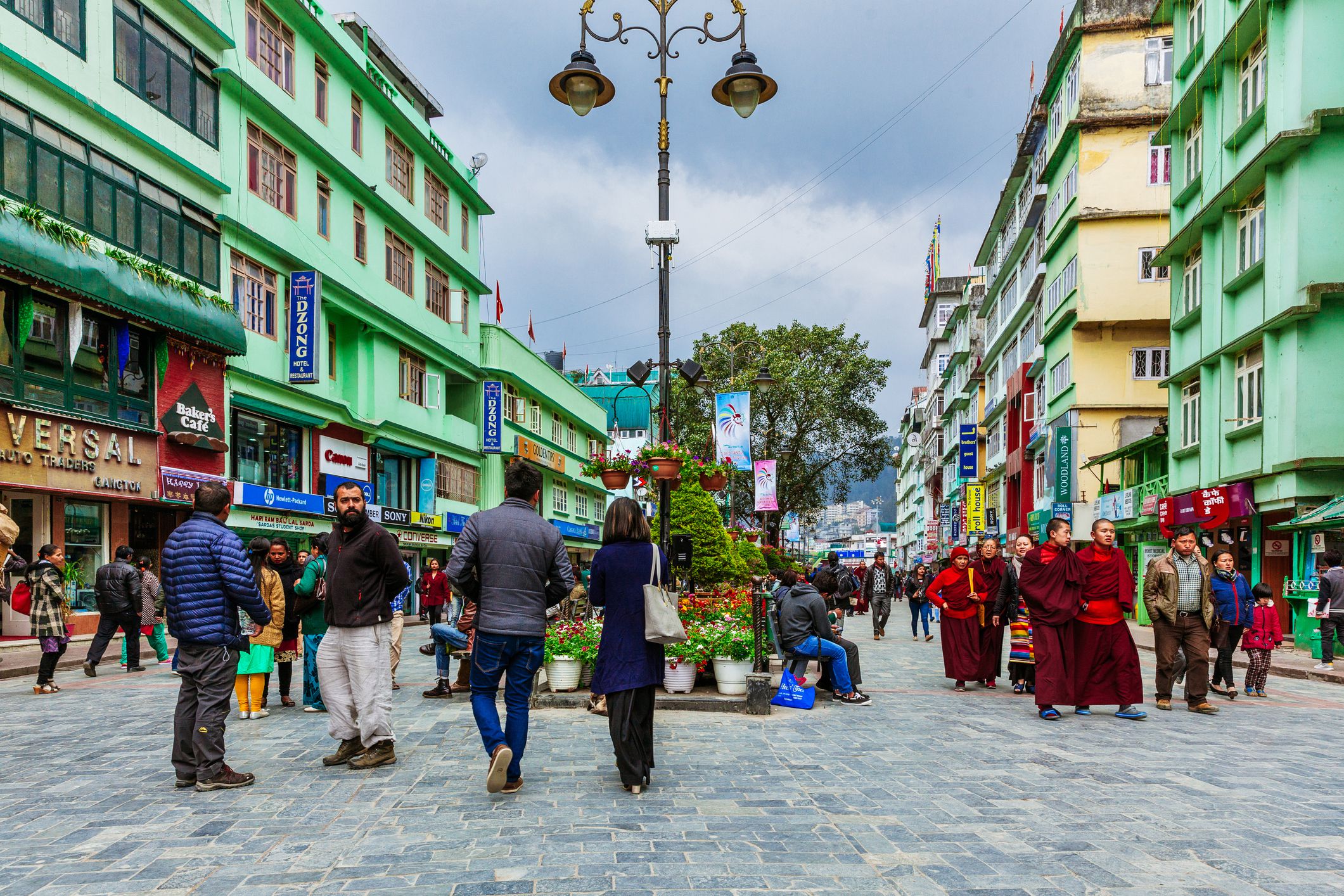 From the flower show center, it’s an easy walk to MG Marg, Gangkok’s atmospheric main street in. The street is refreshingly free of trash, spitting, smoking and vehicles – as all are forbidden there. It is a popular hangout, though it can be very crowded and carnival like in the evening. Go there to do your shopping and also arrange trips with the many tour operators that have outlets there. The tea lounge Golden Tips (Punam building, first floor, MG Marg) is sought after for her boutique teas, including Togo teas which are only grown in the Sikkim tea garden.

Stores along MG Marg are usually open until 9 am and close to 8 pm In addition, many stores are closed on Tuesdays.