Australia’s 10 Weirdest and Most Amazing Sights 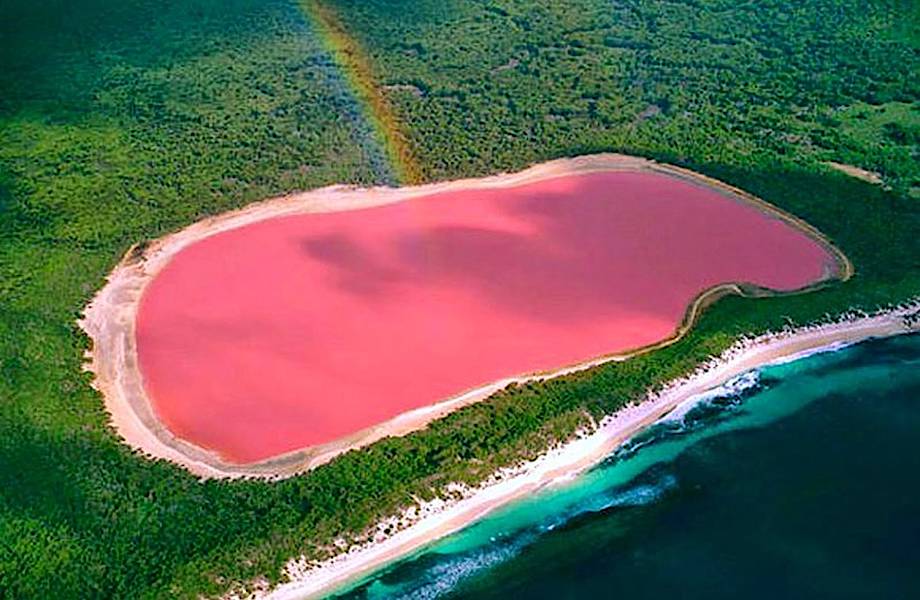 Australia is truly an amazing country, which has gathered many tourist attractions so unusual and incredible that it is difficult even to imagine. Let’s get acquainted with the most impressive of them. 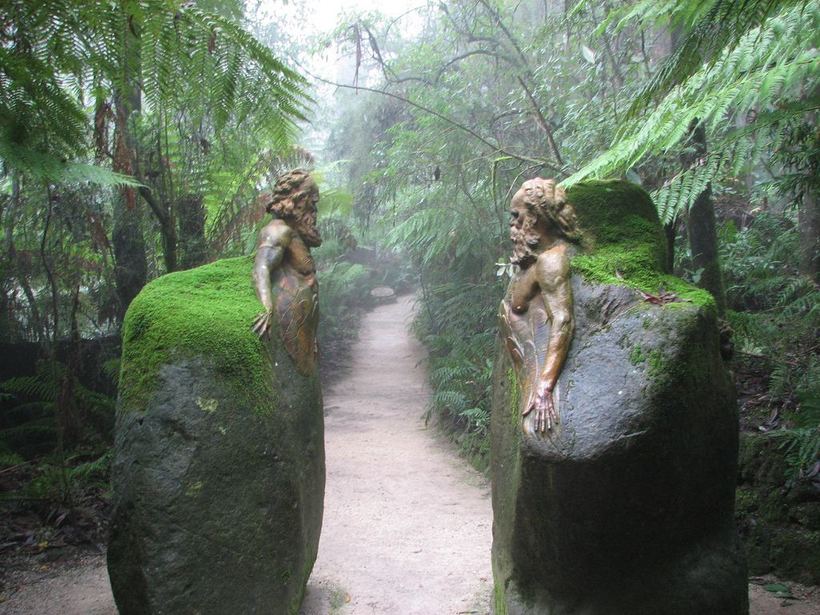 Not far from Melbourne is a stunning garden that covers 160 acres. It is the most mystical attraction in the country. The creator of this place is sculptor William Ricketts, who lived with the Aborigines of the island for a long time. 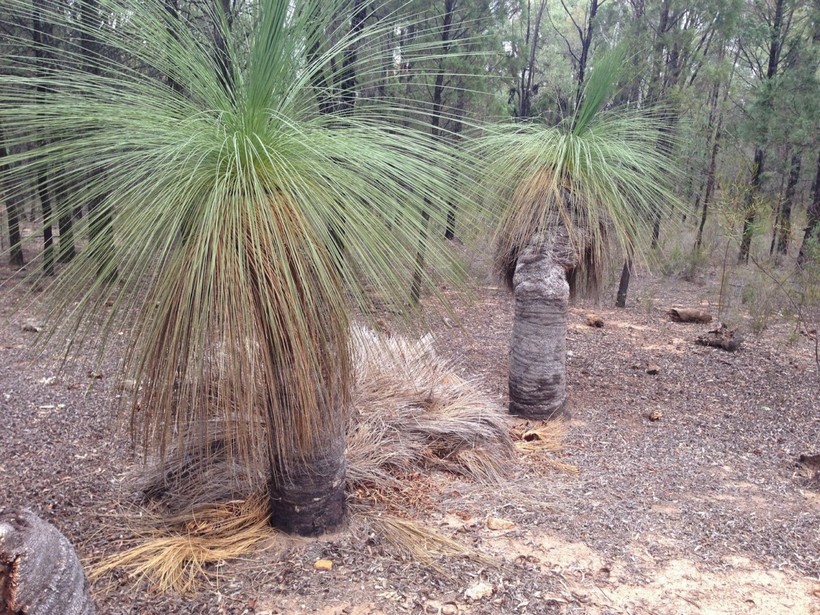 Grass trees are considered endemic to the continent and occupy much of the landscape of Australia. They reach heights of 3 to 4 meters. 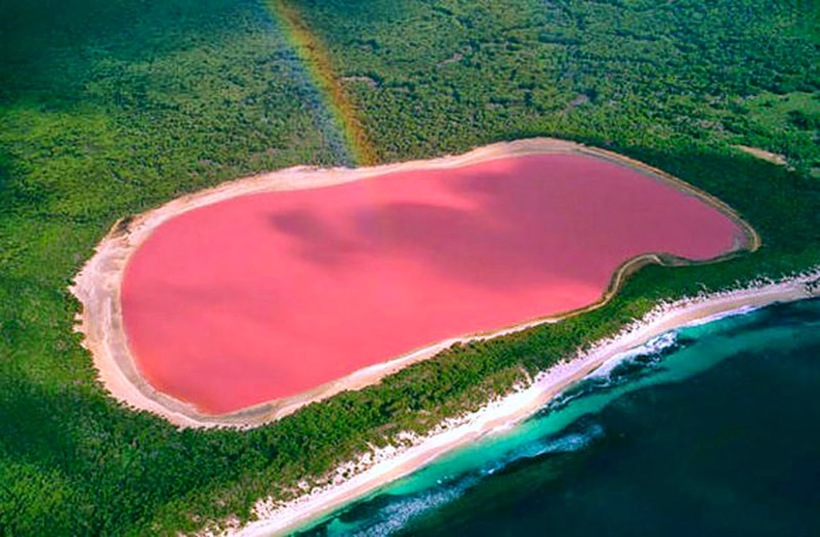 The highly unusual color of the lake’s water is still a mystery to scientists. Getting to it is very difficult, requiring air transport, a trip that costs a lot of money. 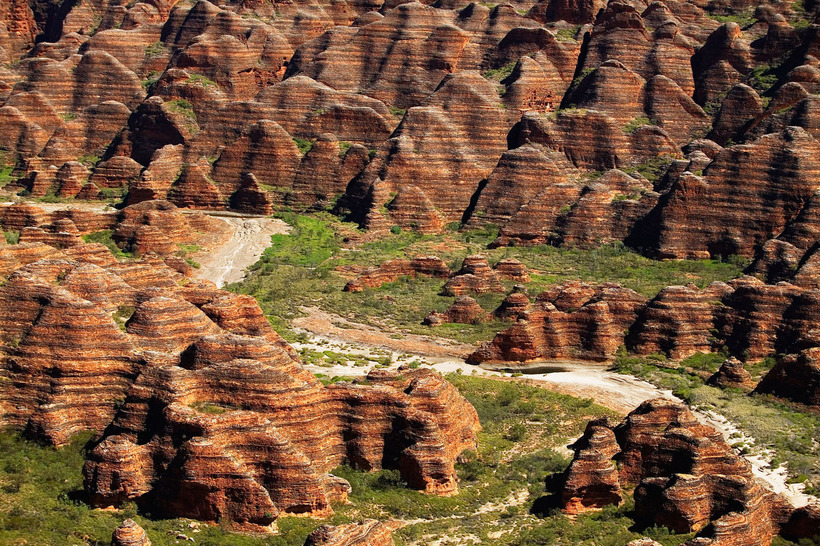 Situated in north-western Australia, the Bungle Bungle Mountains are a UNESCO World Heritage Site. This mysterious place is prized for its incredible landscape, shaped over 350 million years.

Surprisingly, this bay was once used as a shipping yard. Now the wrecks of former ships have become veritable floating wildlife sanctuaries. The most picturesque of all is the Ayrfield, which was shipped to Homebush back in 1972. 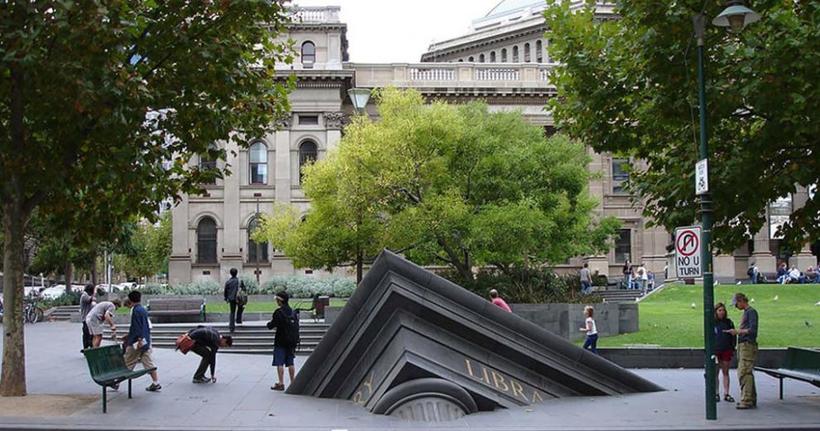 “Sinking” statues outside the State Library of Victoria have been created in many ways, but the best is considered by many to be this “sinking building,” erected in honor of the failed architectural design of the old college campus.

There are over 150 such structures of huge objects in Australia. They are all located in different parts of the country and were created to attract tourists. To date, these objects have become a true iconic phenomenon. 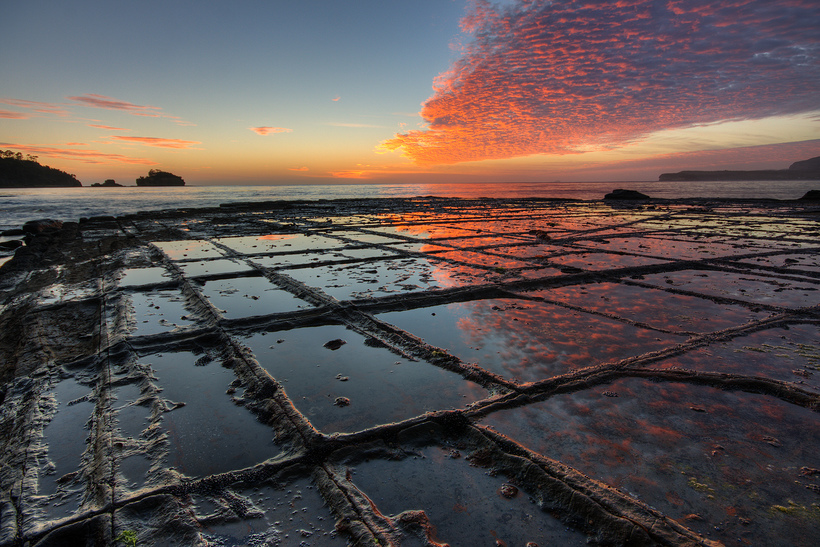 On the isthmus connecting Tasmania with the Tasman Peninsula, nature has created a delightful place – the “Mosaic Pavement”. This incredible phenomenon was formed by geodynamic processes taking place in the earth’s crust, and over time waves and sand have brought it to its present appearance. 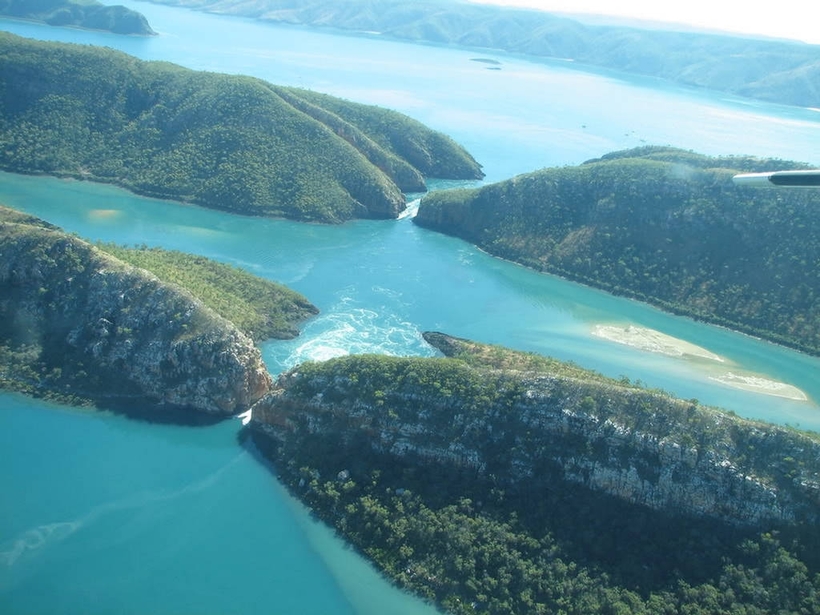 The very fact that you can go up a waterfall by boat seems absurd. But here it really is possible. Long tides that bring huge masses of water several times a day change direction of the stream, which falls from a height of 4 meters and rushes through the coastal gorges. The difference in water levels makes these “horizontal waterfalls” one of nature’s greatest wonders. 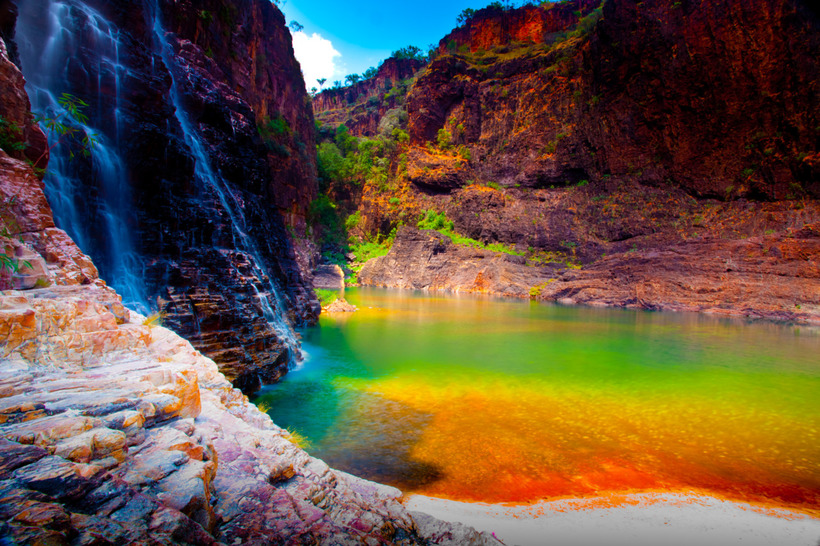 Kakadu National Park is about 170 kilometers from Darwin. With its breathtaking landscapes and incredibly colorful scenery, it has long been a must-see for tourists. In a vast area that is almost half the size of Switzerland, you can enjoy the dazzling beauty of waterfalls, gorges and caves preserved by Aboriginal rock art. Although more than a third of the Australian landscape consists of desert, the country has a dazzling array of very different natural creations formed by its unique climate. Tropical forests occur mostly in the northern and western regions, calling for adventure travelers, while the southern and southeastern regions present some of the most stunning coastal landscapes in the world.

Because of the country’s remote location, many of its wildlife inhabitants are not found anywhere else on the planet, and the same is true for the limitless natural formations. The opportunities to experience nature in Australia are endless. Western Australia is home to some of the country’s most beautiful natural attractions, including pristine beaches, beautiful wildlife and blooming forests, but Wave Rock is one of the most unusual places.

The granite cliff, which is shaped like a towering wave, is 15 meters high and 110 meters long. The rock is part of the Hayden Nature Reserve, an area of 160 hectares. The towering rock formations are impressive in almost any setting, but the cliffs along the Tasman Peninsula are truly spectacular. Rising to a height of 300 meters, these cliffs stretch along the coast and form some of the island’s most visited landmarks: Tasman Arch, Waterfall Bay and the aptly named Remarkable Cave. The heritage-listed stromatolites in Shark Bay are some of the oldest fossils in the world. These carbonate structures are the modern equivalents of the earliest signs of life on Earth. The best way to visit this remarkable place is to travel along the Coral Coast, one of the most striking stretches of land in Australia. The Flinders Ranges make up the largest mountain range in South Australia, creating one of the most attractive panoramic landscapes in the country. Wilpena Pound is a round-shaped mountain formation resembling a meteorite crater, a giant natural amphitheatre of more than 80 km in area.

Wilpena Pound became world famous after the Australian photographer Harold Kazno in 1937 made a picture of a lone tree surviving in a harsh semi-arid climate. The tree still stands, a prominent landmark within Ikara-Flinders Ranges National Park. The 167,219 hectare national park is located 260 km west of Melbourne. It is one of those destinations that can delight the traveler as soon as he or she arrives, revealing striking ranges of mountain ranges and the fabulous Victoria Valley.

Grampians is one of the richest sites of indigenous rock art in southeastern Australia. The motifs painted in the many caves include images of people, animals and birds.

A visit to Undar’s lava cave (chimney) many centuries ago would have been extremely uncomfortable, given that it was once a seething stream of angry volcanic activity. These days, however, visitors can wander through tunnels and caves created by years of consistent effort by Mother Nature. Here are the remains of the longest (about 160 km) lava flow on Earth, originating from a single volcanic crater.

Undara Volcanic National Park is known not only for its lava tubes but also for its gems (topaz, moonstone, peridot, aquamarine, garnet, quartz, and gold). Because most of Australia’s population is concentrated in certain areas, there are many places throughout the country that offer incredible stargazing where there is no “light pollution” from major cities.

One of the best stargazing spots on the planet is Dark Sky Park, located in Warrumbungle National Park, New South Wales. Here you can stay overnight in a tent or use the observatory to almost plunge into the starry sky. The phrase “I can get you a star out of the sky” seems real here.

Red Rock Uluru (Ayers Rock) is a giant monolith rock. Special viewing platforms are built to give tourists the best views at dawn and dusk.

Uluru is a must-visit destination for anyone heading to the Northern Territory. Uluru-Kata Tuta Park is incredibly beautiful and deserves its own spot on the world tourism map.

It is a group of strikingly large rock formations found southwest of Alice Springs. The red rock of Uluru defies even the boldest imagination. The mountain changes color at different times of the day and year, glowing especially beautifully red at sunrise and sunset. One of the great joys of traveling in Australia is the Great Ocean Road. Exploring the beautiful landscape where the ocean meets the land is an unforgettable experience thanks to the endless sights flying by outside the windows.

One of the most incredible places is the Umpherston Sinkhole in Mount Gambier, South Australia. It was once a limestone cave, but over time the roof collapsed and the cave was transformed into a majestic garden. Nature knows how to surprise. The only disappointment for visitors to Kings Canyon is the inability to accurately capture the majestic sandstone walls on film. Nothing short of standing in front of them in person can evoke the sense of wonder and admiration that overwhelms anyone who looks at the smooth sections contrasted with the chaotic chasms.

READ
Montenegro's cuisine. What traditional dishes are worth trying?

Kings Canyon is set in one of the most beautiful landscapes in Australia’s Northern Territory. The drive here takes about six hours by car from Alice Springs, and it’s well worth it.