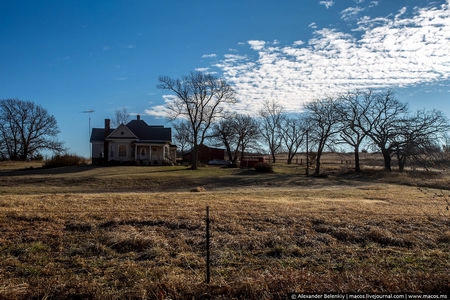 21 For those who like solitude. A man has built himself a house away from everything in the world. He keeps cattle, chickens. In the summer he cultivates a little vegetable garden of a couple of hectares. In autumn, he sells all his corn, or whatever he has. 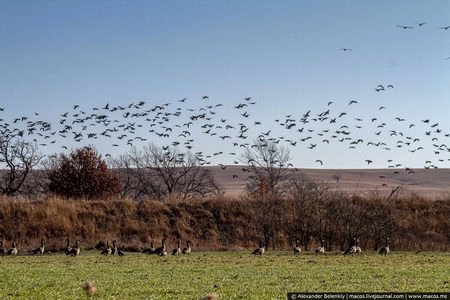 22 When you ride the backcountry trails, you get closer to nature. The migratory birds sat down to rest in the field. As soon as I opened the car window and “took aim” at them, a flock took off into the sky. 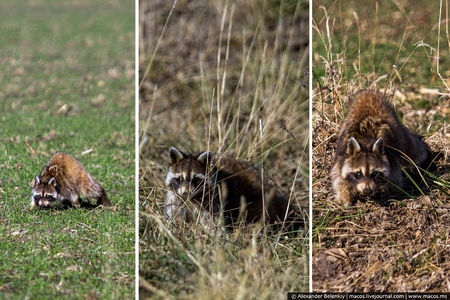 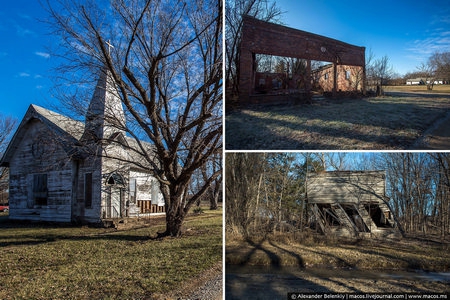 24 The abandoned town of Quincy. A few families still live practically as hermits, but the town itself no longer exists. Well, as hermits, there are roads, cars too. 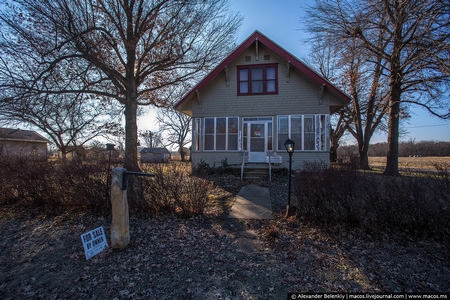 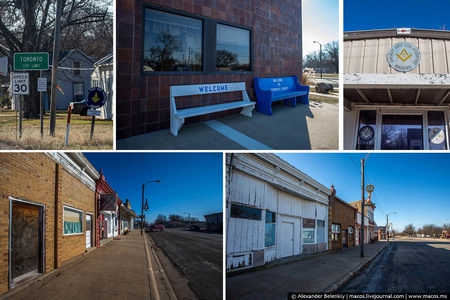 26 Suddenly I found myself in Toronto. Another very small town in Kansas, three hundred people. Main street and a couple of parallel streets with private houses. It also has its own Masonic society. 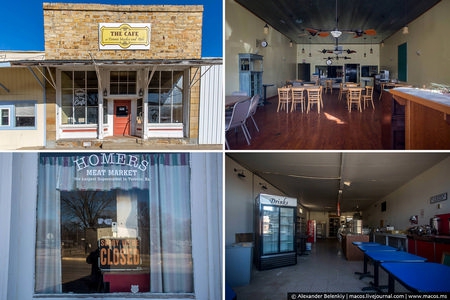 Somehow it reminds me of the Wild West towns I’ve seen in movies, just as authentic. A supermarket and café once existed, but they closed long ago. Torontonians shop at Walmart, about an hour away. 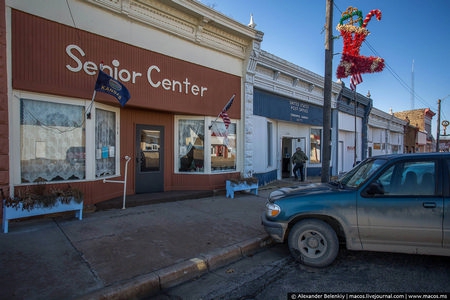 In all of Toronto, only the post office and the Senior Citizens Centre are open. Of course, I had to go inside.

29 It’s a big room with wood-paneled walls. A couple of tables are occupied in the far corner. 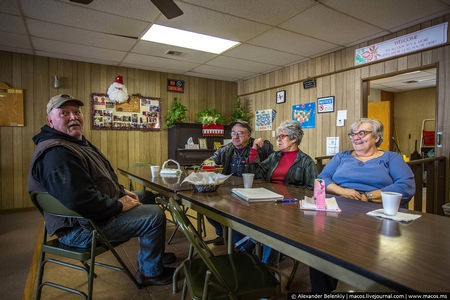 30 And the old folk were just waiting for someone to drop in! Oh, a new face! A young man, too! Tell us who you are and why you have come. Of course, they were impressed that I had come to their town from Russia, and they gave me coffee and cookies.

31 You’re writing, aren’t you? :). I love American old people. They are so unlike our retirees, and I am sad that they are. After all, both have worked all their lives and deserve a good life. In the States, there are whole cities of old people who live there for their own pleasure, having fun and playing sports. I had a report from such a town in Arizona, read it. 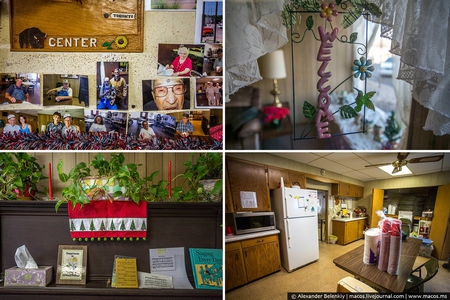 32 The Over 70 Club exists through the efforts of Kansas seniors themselves. They get a little money from the state once a year, which they spend on coffee and disposable cups. In all, the community is made up of several dozen seniors from a town of three hundred people. They gather every day, and it gets crowded in the evenings. They celebrate holidays together and spend regular days talking: they don’t just sit at home. They play bingo on Tuesdays and cards on Fridays.

READ
Holidays at sea in India

33 Like the “real” Toronto, Kansas’ little brother has his own tiny Lake Ontario

My grandmothers used to call me to come in the summer to swim. And the fishing is great. 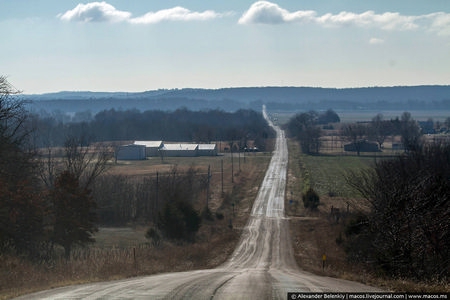 34 I can’t even believe it’s only a half-hour drive from here in either direction – high-speed modern highways. And there are. Tens of thousands of cars pass through these godforsaken villages every day.

35 Nice neat little houses. One of these must have been the home of Ellie, the little girl who was swept away by the tornado. 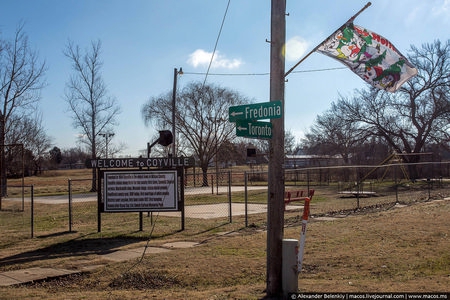 36 Coyville consists of ten houses. And once, before all those highways and Wal-Marts, it was a nice little town. There’s a whole history of it hanging by the athletic field. Founded in 1864, it’s the oldest town in Wilson County. It was named for Oscar Coy. In the unforgettable days of the mid-19th century it thrived in many ways, being the foremost town of the district. The first store to open in the county was in Coyville. The first mill and church were also built here, and the first blacksmith opened a shop here. There was even a Masonic lodge. What a humbling thing the pervasive importance of America’s tiniest towns is. Everyone has something unique to say about themselves. Today, Coyville’s population is forty.

37 Fredonia long ago took the mantle of first place. There are a couple of businesses and a car dealership. Well, there are restaurants, even the Gold Dust Hotel. But it was surprisingly less interesting than all the others in today’s story. 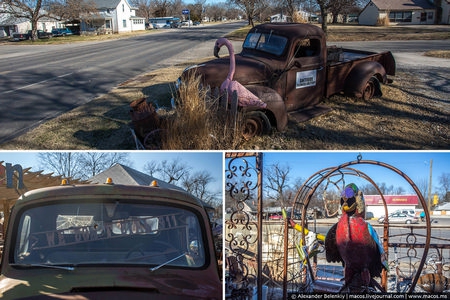 38 If you’re going on a road trip across the U.S., you’ll come across stores everywhere. They sell all sorts of old stuff, like flea markets under the roof. Don’t be lazy to stop and look inside. Sometimes the most unexpected things happen there!

39 Of course, there are also “faux” junk stores that sell just nice souvenirs for the home. This is another way retirees spend their time. This woman’s daughter went to live in the big city, and she helped her mother open a store down the road so she wouldn’t get bored in her godforsaken backwoods. 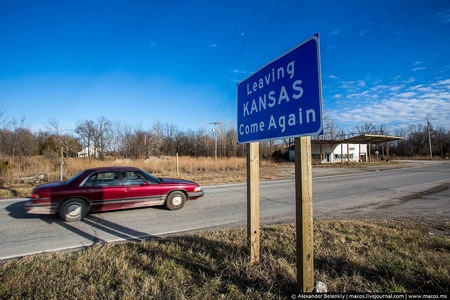 40 Kansas is amazing. On the one hand, there really isn’t much to do: no cities, nature is monotonous and flat…But the people who live here left a very strong impression: I’ll tell you more about the unusual and strange Kansas people I visited.

The 25 Best U.S. Cities for Families 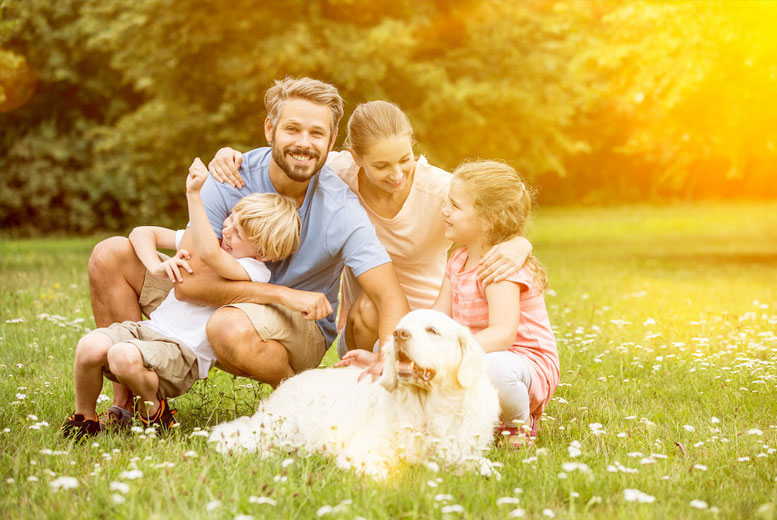 When it comes to moving to the U.S. with your family, there are plenty of options and information. As always, we used the most publicly available and accurate data from the U.S. Census Bureau. The first and most important factor we considered was education.

We also considered important factors such as cost of living, crime and safety, and housing affordability. We rated each of these on a five-point scale.

In this article, we look at the 25 best cities for families to live in the United States. 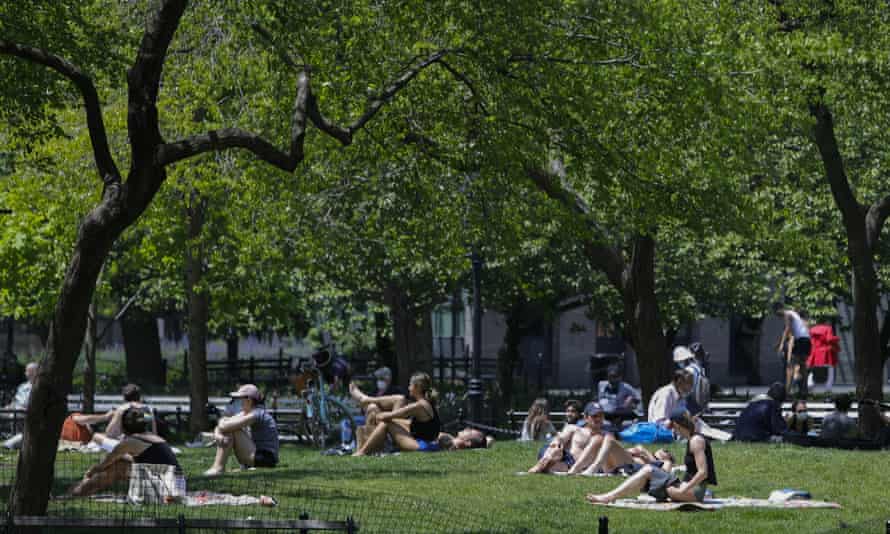 Portland is a mix of urban and suburban areas with short, dry summers and fairly cold, wet and cloudy winters. If you’re comfortable with an average of 154 rainy days a year, you’ll find eco-friendly environments, parks, bridges, bike paths and plenty of mini-breweries and cafes where you can spend those rainy days while your kids study hard. Portland has a planetarium and 30 museums. 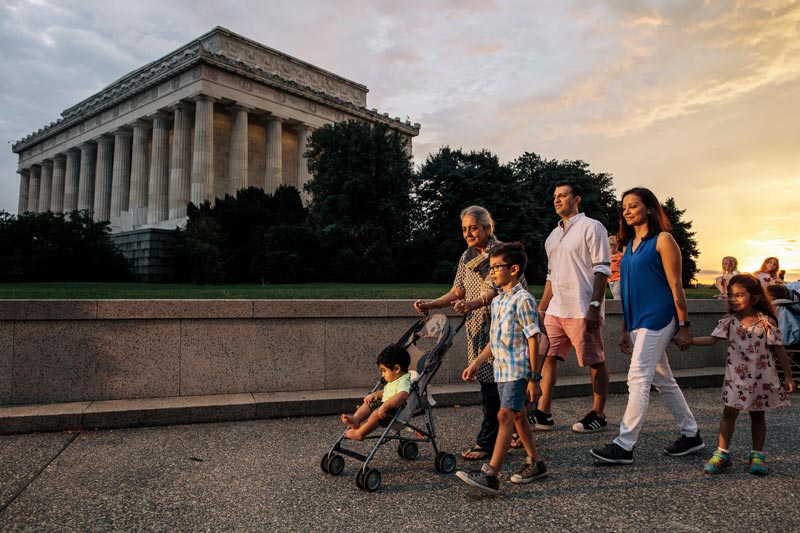 The capital, Washington, D.C., is home to the Smithsonian Institution, a world-renowned museum and research complex of 17 museums and galleries, including the National Zoo. There are many public schools in Washington, D.C. (4-). 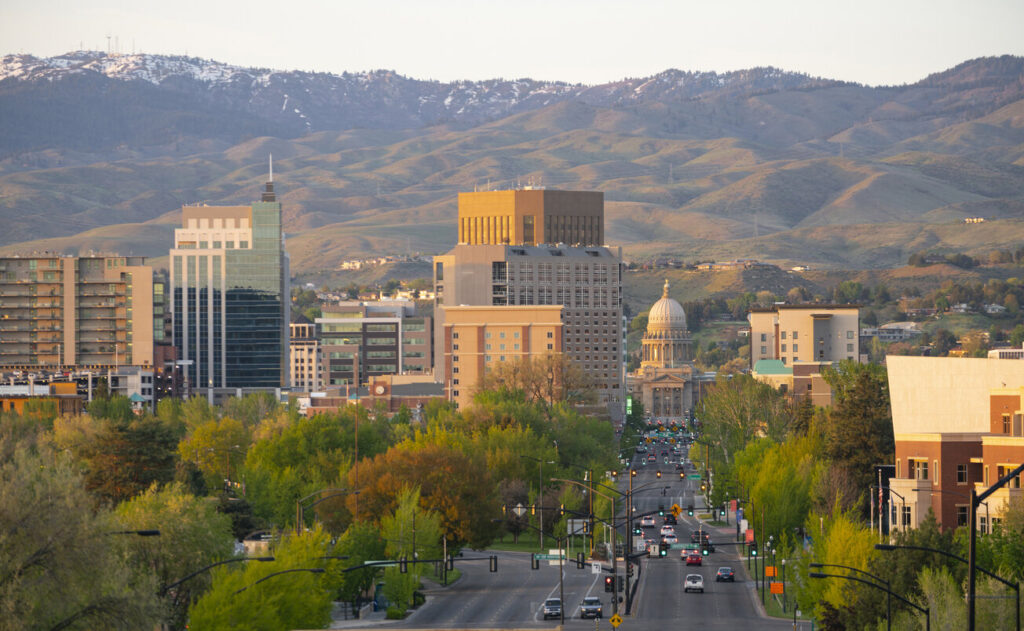 Great, small, quiet town for families. The public schools here are above average (5-). 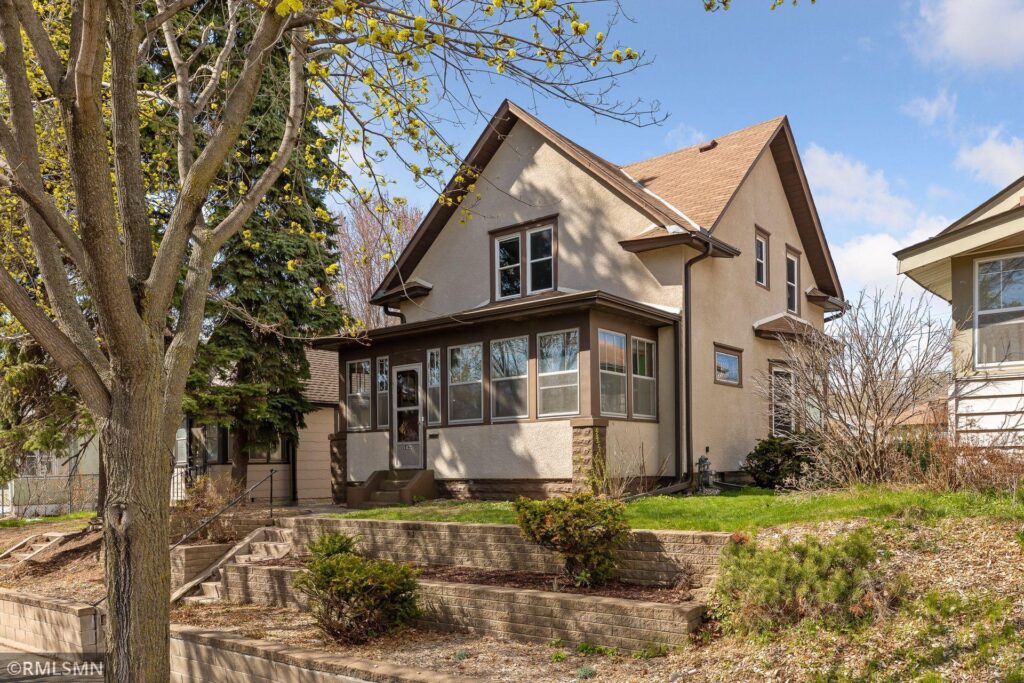 St. Paul is home to 16 universities and colleges. 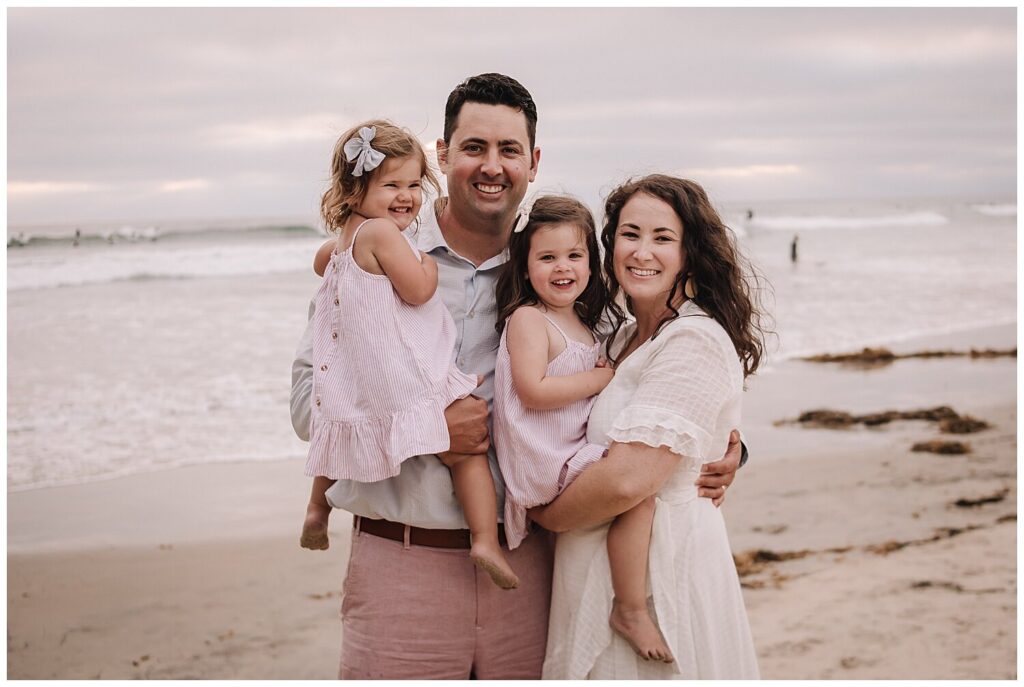 READ
Vacations with children in Spain

The only metropolis in our ranking is The City That Never Sleeps, Gotham City, or The Big Apple. 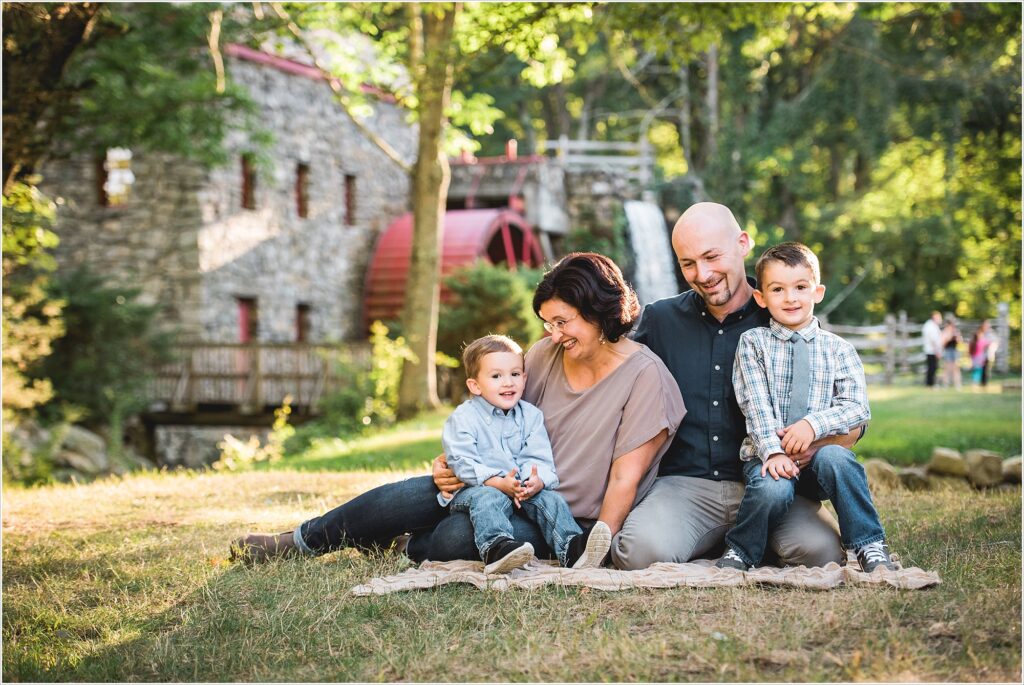 When we hear Boston, we all think of Harvard University and MIT and what a good place for families to live. 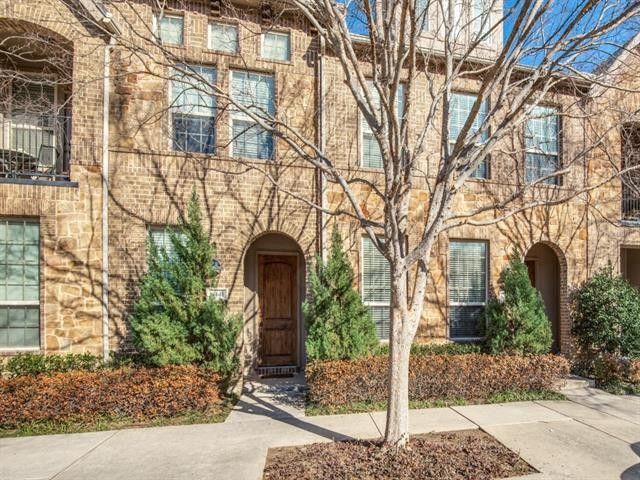 There are 33 colleges in Irving, including 7 community colleges and 4 state colleges.

Tampa has a very large college population. Rated (5) for: outdoor activities, weather, and nightlife. The city is perfect for starting a family.

You can also find cultural entertainment in Tampa, such as museums and science centers. 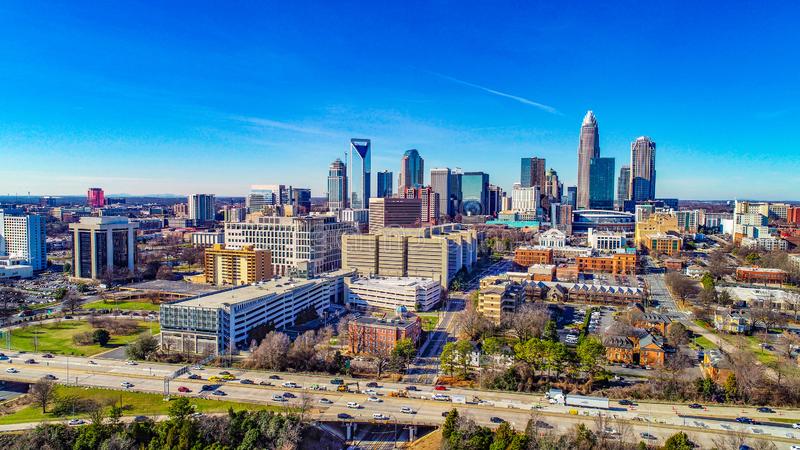 North Carolina is rated (4+) for its schools and 39 colleges with a combined enrollment of more than 115,000 students.

Minneapolis is another good city for family living in the United States. Minneapolis has 78 colleges and universities and 55 museums. 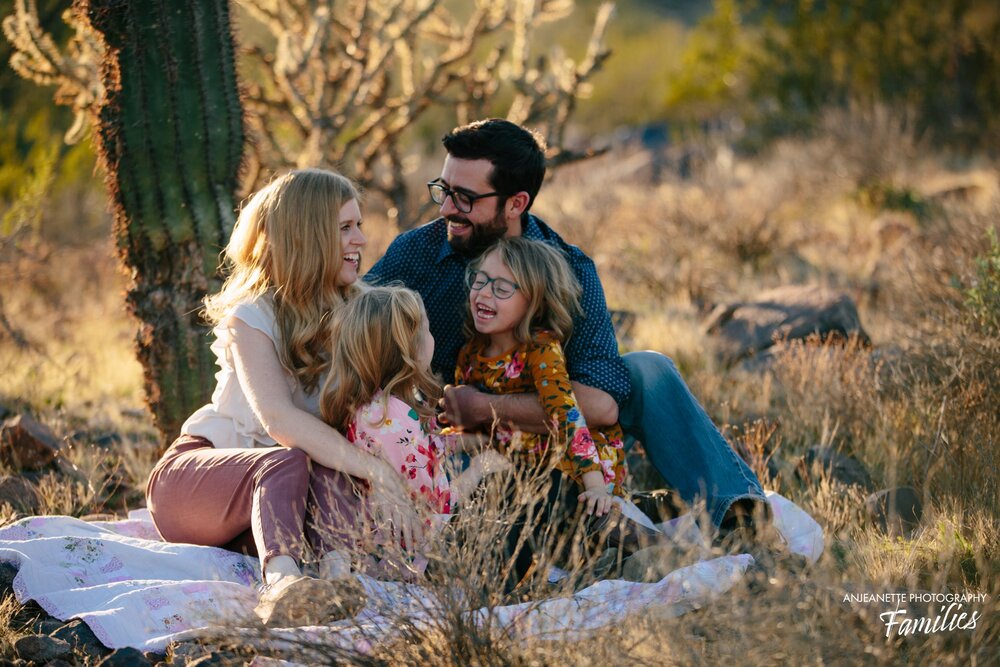 Rated (5) for schools, health and fitness, nightlife, and weather (5+). There are about 40 colleges and 7 museums in this city.

The American family town of Lexington is rated (5) for its nightlife, outdoor activities, and commuting to work. Lexington is home to the Center for Arts and Science, the McAdam Student Observatory, Georgetown College, Transylvania University, Asbury University, the University of Kentucky, and several other universities.

Texas has 15 universities, two of which are religious universities: Austin Presbyterian Theological Seminary and Austin Graduate School of Theology. In Austin, you can also choose from 29 museums and several science centers and planetariums. 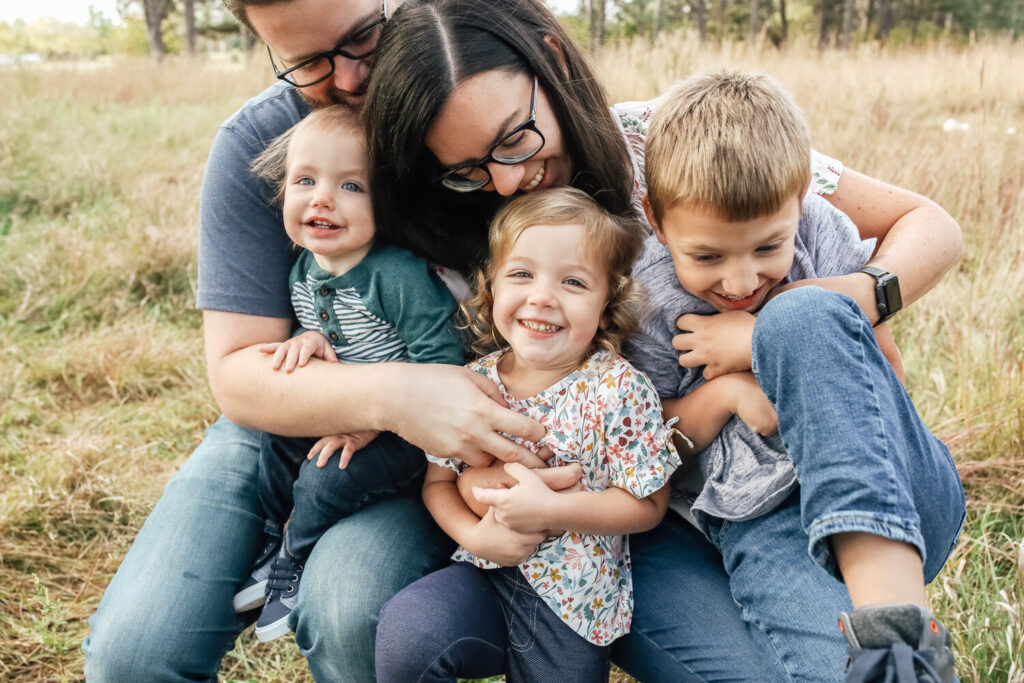 Lincoln is rated as a good city in the United States for families – (5). There are very many public schools here. 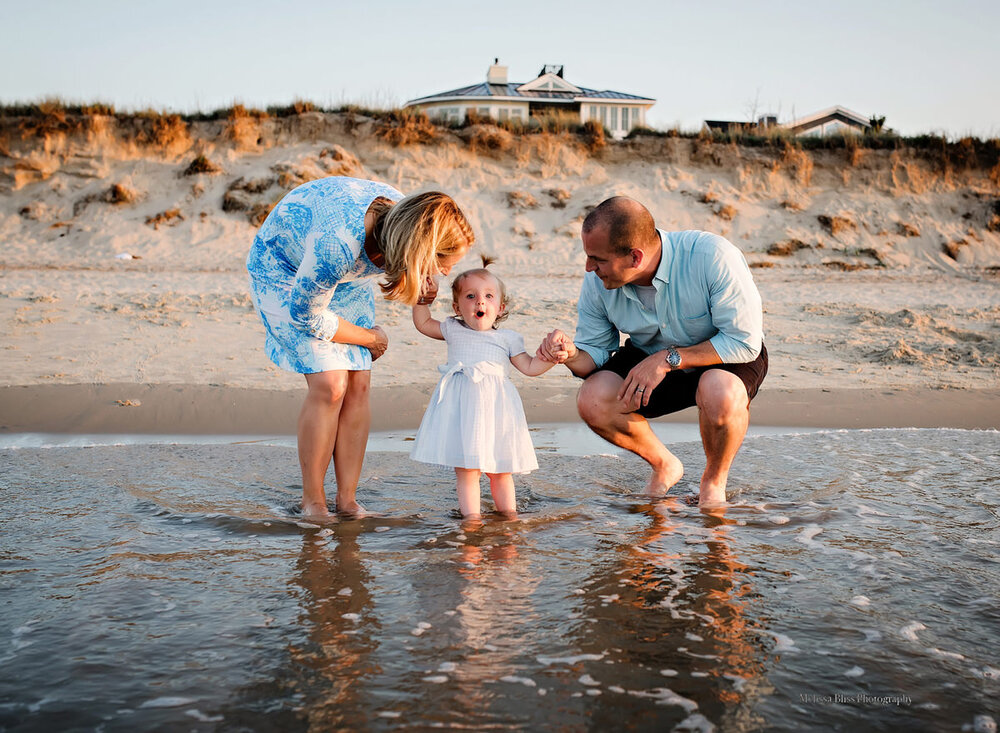 Virginia Beach, another family-friendly paradise. The city is great for families. There are plenty of public schools, places for outdoor activities and nightlife.

San Francisco is unusually good for families. There are 20 colleges and universities in San Francisco in an area of less than 129 square kilometers. 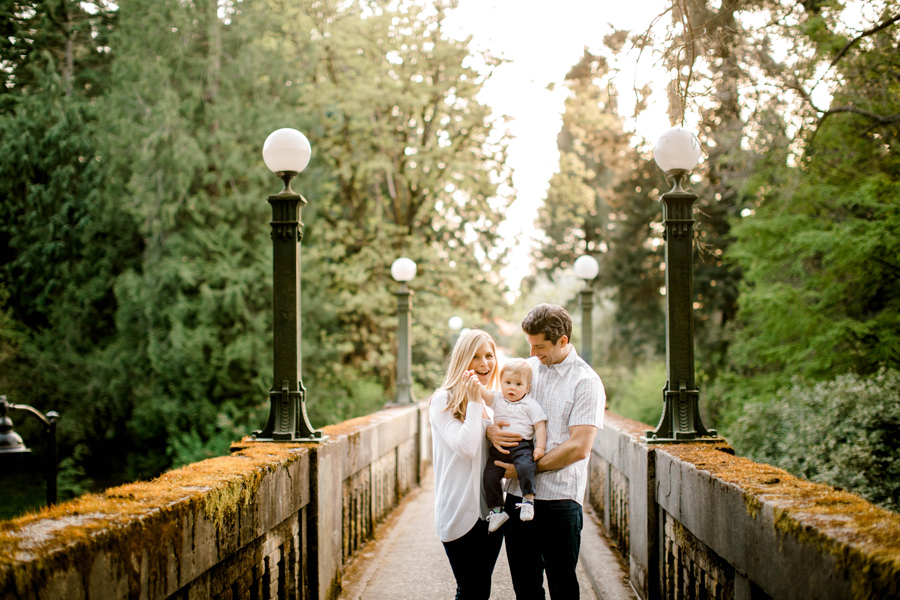 Seattle is environmentally friendly, safe, and residents have above average incomes.

Raleigh is home to the Morehead Planetarium and Science Center, Raleigh-Durham International Airport Observation Park, the North Carolina Museum of Natural History, and other tourist attractions such as the J.C. Raulston Arboretum. Raleigh is rated (5+) in the Good for Families category and rated (5) in the Public Schools category. There are 10 colleges and universities in the city. 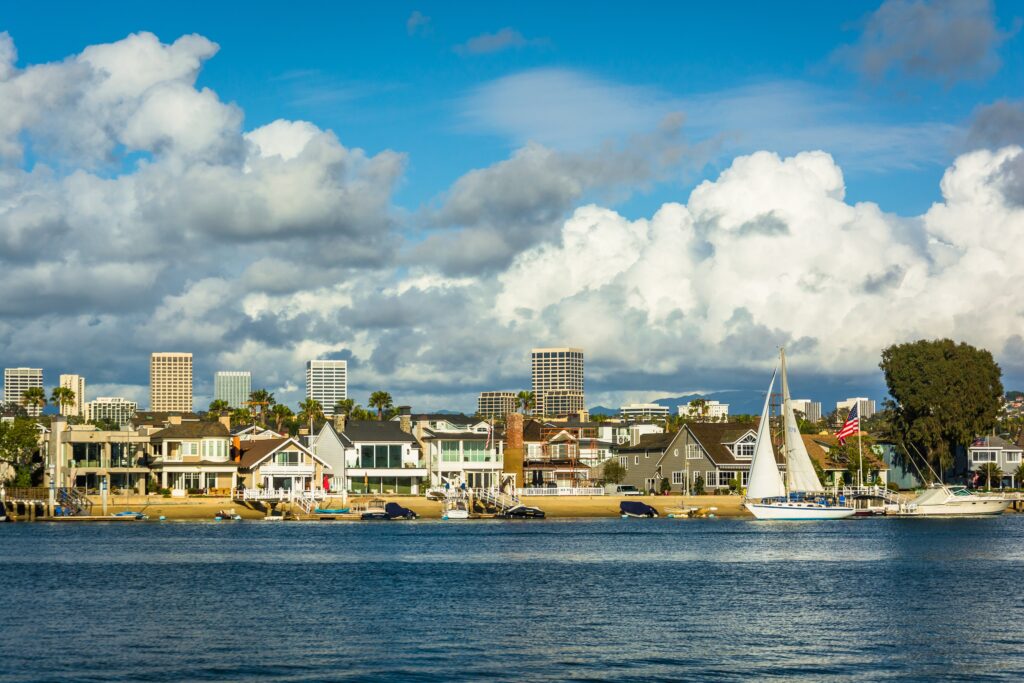 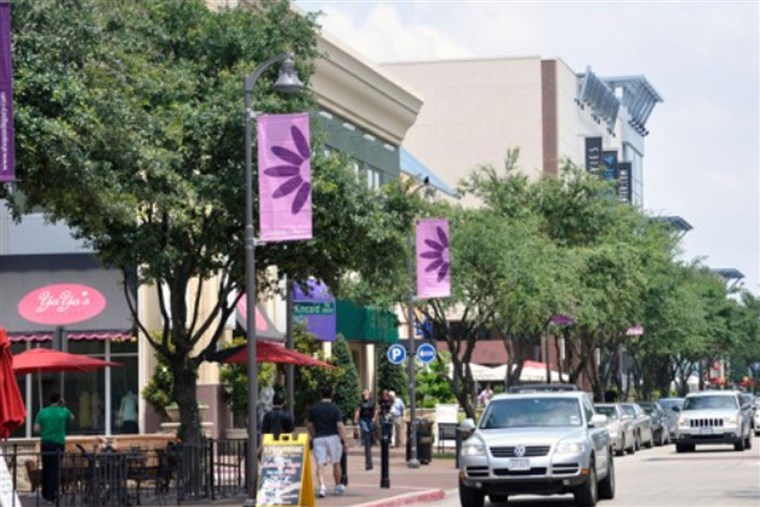 Although a small and quiet agricultural town, Plaino is known for its robust job market and the headquarters of several Fortune 1000 companies and approximately 10,000 other businesses. 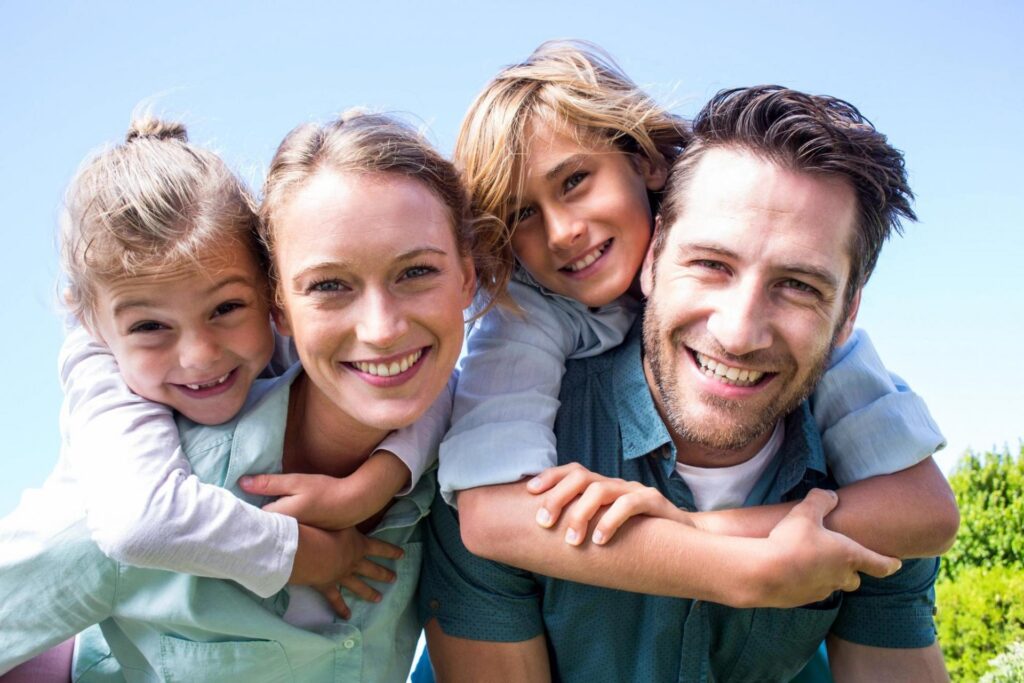 Arlington is great for families, with its many schools, favorable health, fitness, and nightlife. Arlington is home to 43 colleges and universities. This American city also has more than a dozen museums and research centers.

Friends, please subscribe to our VKontakte group where we publish the most interesting and useful articles.