The most beautiful cities in Hungary

Hungary will want to visit every tourist who wants to see unique in its architecture cities and enjoy the natural scenery. There are many cities in this country that should be visited by any traveler. We will mention the most popular and tell you about the most interesting ones.

Top 10 most beautiful cities in Hungary

Siofok – a city on a picturesque lake

Lake Balaton is famous all over Hungary. There are many health resorts where tourists can spend time with health benefits. 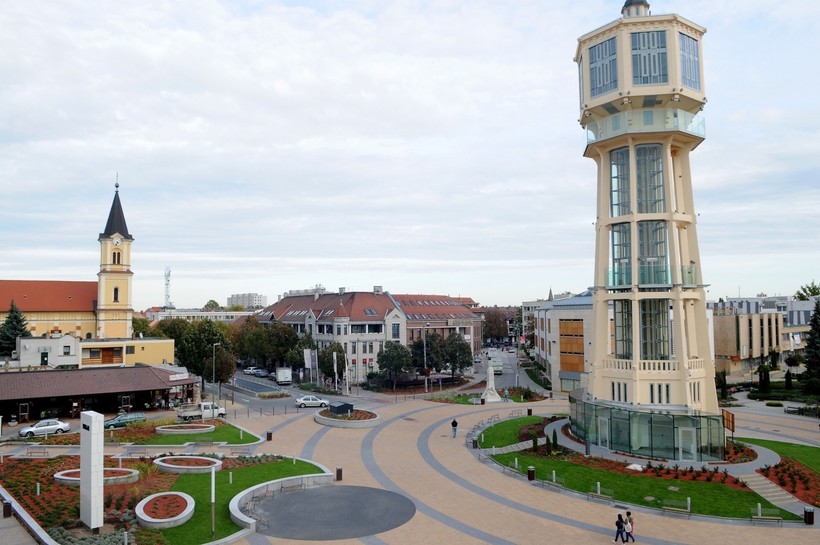 On the lake itself guests of sanatoriums prefer to go yachting. Siofok has resort status, a few well-appointed beaches. Keszthely is situated not far from Siofok, and the nearest close neighbor is Budapest.

Budapest – the Pearl of the Danube

Travelling around Budapest, the famous Fishermen’s Bastion is worth a visit. Here in ancient times there was a large market where the freshest seafood was sold. Tourists love the Fishermen’s Bastion for its small niches with benches to sit on and admire the beauty. The bastion, by the way, is called for a reason, because there is a large tower, from which you can admire the Danube. 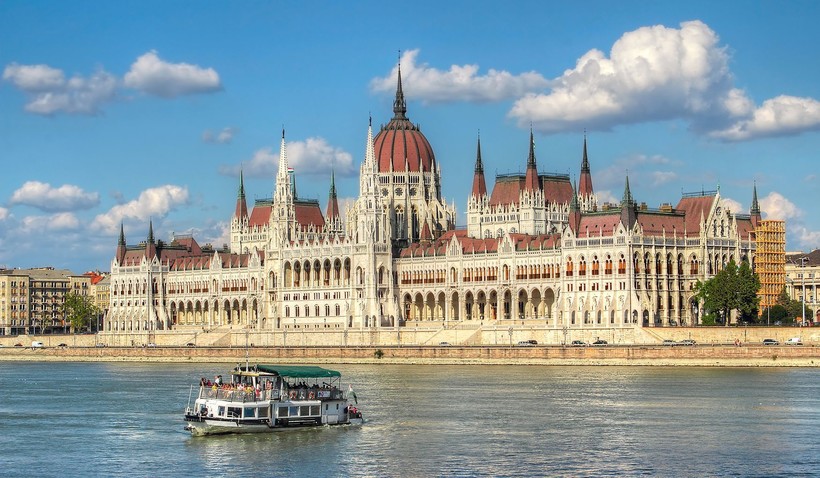 The most prominent street of the city is Andrassy Avenue. They are often compared to the Champs-Elysées, and the castle hill readily shows off the mighty palace located at its top.

The castle hill is not just a place to contemplate the palace. Museums and narrow streets with cozy places to relax also attract travelers. In the ranking of attractions stands out the Church of St. Matyas, which is recommended to visit all the guests of Budapest. This is one of the few churches in the world, which demonstrates the unique European eclecticism, combining a variety of styles. If one center is not enough, visit Margaret Island. It’s tranquil and practically hassle-free. Allowed to have a picnic, you can enjoy the beautiful park, look at the suggestive monastery. You can even swim, but in any case do not litter – for this are strictly monitored here.

The inhabitants of Debrecen are notorious for rebellion, who rejected not only kings, but also bishops. Many of them rejected Catholicism and converted to the Calvinist faith. Debrecen’s architecture delights with grandeur, originality, and unique style. A popular place – Calvinist square, which connects to the street Piatz, each of the houses which have become a kind of decoration. Any tourist who has been to this square will understand what we are talking about. The lanterns alone, decorated with flowers, are memorable forever. 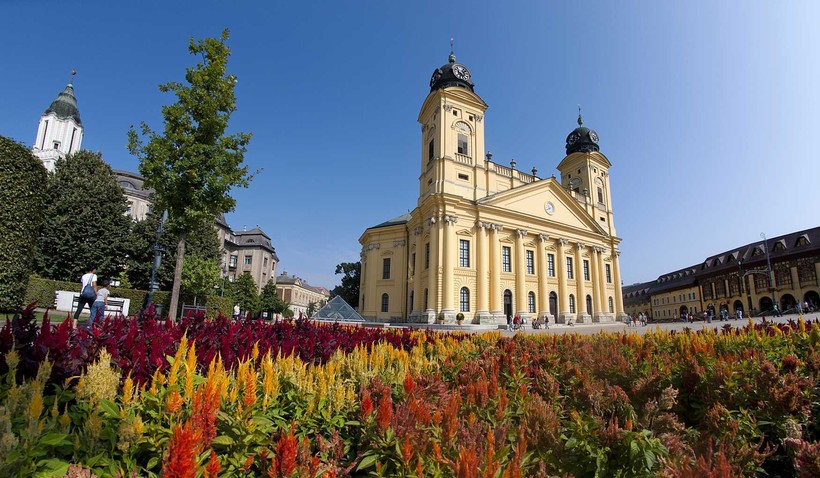 The Calvinist library is world-famous for its nearly 300,000 books. The Reformed Cathedral, with a capacity of 5,000 people, is capable of making an indelible impression. It is considered one of the most magnificent buildings in the country. A visit to the cathedral would be interesting to anyone who is interested in theology and religious studies.

Strangely enough, but in the ranking of significant places of Debrecen is the city cemetery. The city park, combined with it, makes this place incredibly romantic. There are many pools, ancient sculptures, and the crematorium building is included in the list of architectural masterpieces. The significance of the public cemetery is great – it is considered a monument of the state level.

Finally, it is important to note the Red Church. Built of brick, it inspires awe to anyone who looks at it. Inside, there are many frescoes based on biblical motifs.

Győr has a rapidly developing industry, and more recently it has been joined by tourism. Historical, cultural heritage of the city is great, and it became known as a water town because of its location near the Raba. You can take a boat trip along the river, exploring all the surrounding areas in detail. In the summer months it is great to go fishing or just relax in nature. In Győr there is a Roman fortress, once captured by Charlemagne. The city survived the Napoleonic wars, and the Second World War also took many lives and architectural achievements. The local authorities spent a lot of money to restore the former appearance of the city. 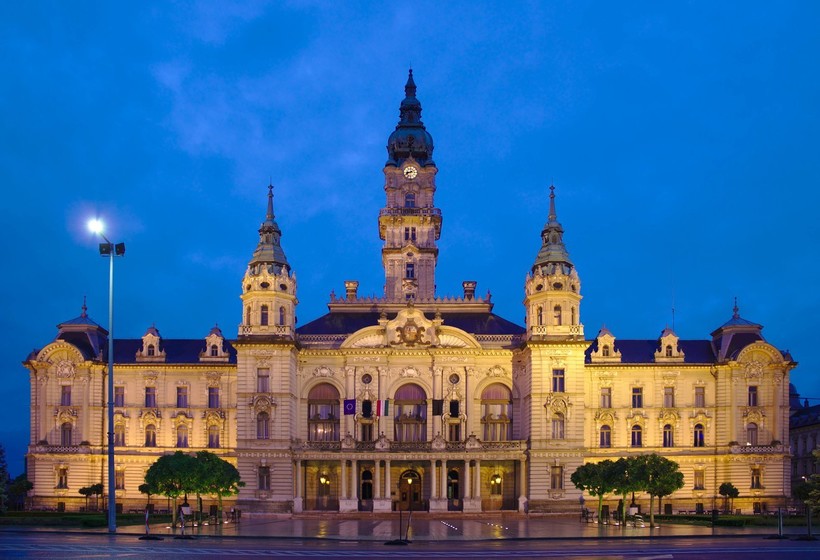 A significant cultural and historical site is the Benedictine abbey. It is the oldest monastery in Hungary, built back in the 10th century. It combines several styles:

An exquisite interior and rich decoration, beautiful frescoes, an exquisitely decorated altar shining with gilt – all this awaits the traveler in Pannonhalm Abbey. It has an excellent library with over 300,000 books, many of them several hundred years old.

The historic center of Gyor can surprise you with some quite interesting places. For example, the old pharmacy, which also serves as a museum. On Szechenyi Square there is a beautiful column, built at the end of the 17th century. Many stone fruits and reliefs decorate it, and around it stand John the Baptist and other saints. The column is named after Mary, who is holding a baby, marking the birth of the holy child. And that’s not all the attractions of the popular Gyor. Believe me, this city is worth spending a few days in it.

Kecskemét – the heart of the Hungarian plain

In Kecskemét you can see buildings from the 19th and 20th centuries. There is a museum of naive art and a beautiful arboretum. The city is well preserved due to the fact that a reliable agreement was reached with the Ottomans, who took control of it. Making a regular payment of tribute, Kecskemet received the protection of the Pasha of Buda himself. This allowed agriculture to grow rapidly and created many orchards and vineyards, which can be seen walking through the local streets. 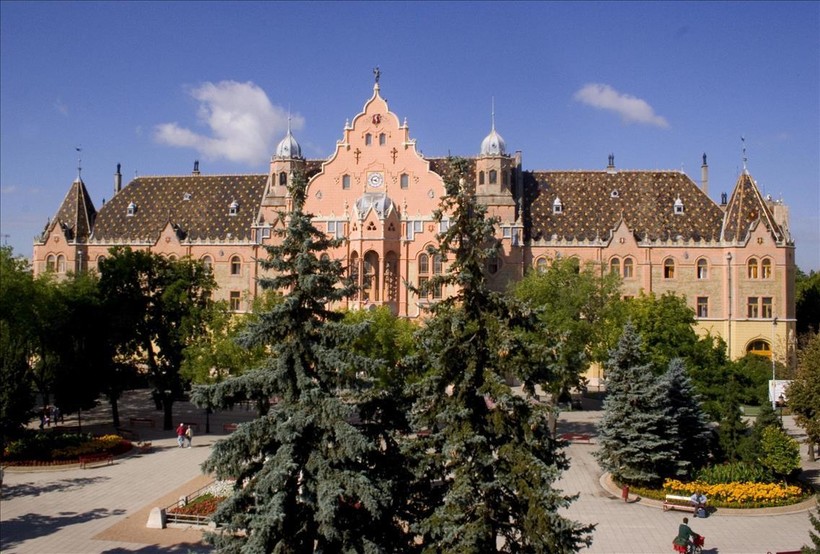 The town hall is one of the most famous landmarks of Kecskemét and attracts many travelers. It stands out for several features. Firstly, the main style of the building is Renaissance, secondly, the influence of the Secession can be seen. Thirdly, the town hall has a clock with beautiful bells. When the wind blows you hear a characteristic chime. Also this clock “plays” beautiful melodies.

On Lajos Kossuth Square you can see a beautiful church where Catholics come every Sunday for services.

A structure of astonishing beauty is the palace “Numira Palota”. It is a real work of art in the Hungarian Art Nouveau style, decorated with ornaments in the form of flowers. Inside is a gallery, which presents paintings by famous Hungarian artists. A total of 80 paintings decorate the gallery, delighting the eye and delighting all the guests.

Miskolc – a town for culture and leisure

The town is famous for its health resort, where you can improve your health by taking a dip in the thermal springs. But it is also rich in sights. There is a beautiful fortress that survived to this day. It was built in XII century and restored in the middle of last century. It survived the invasion of the Ottomans, who severely damaged the appearance of the fortress. The authorities did their best, so now Diosgjör looks almost the same as it did in earlier times. Inside is a museum with various themed rooms. Each has its own atmosphere. 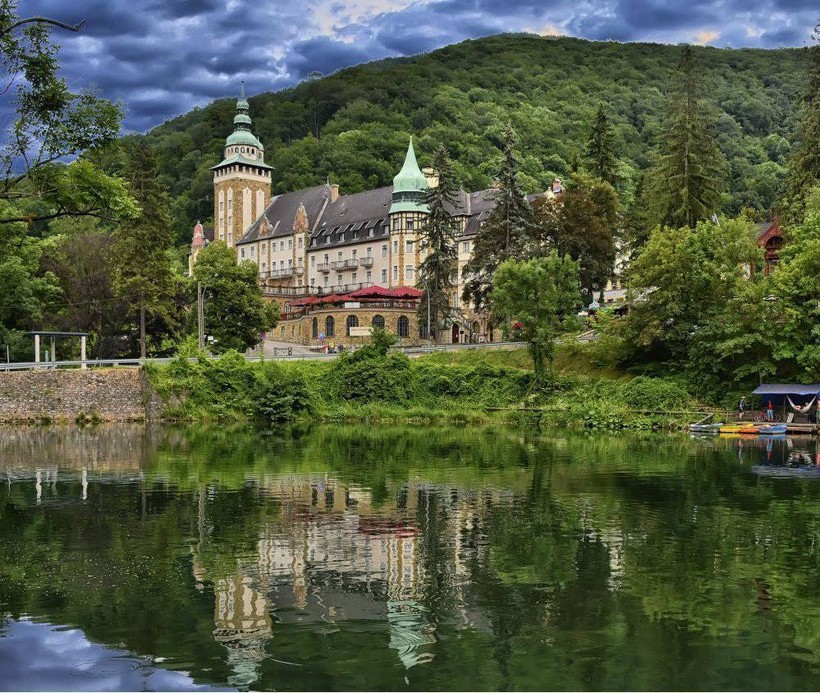 Another significant attraction of Miskolc is the Calvinist church. It was built in the XIII century, and the architecture of the building shows the influence of Protestantism. The famous shrine was reconstructed many times, so now its appearance is very different from the past. The church has a Gothic style, a triple nave and an exquisite interior. Its uniqueness lies in the use of different types of wood.

Miskolc is able to pleasantly surprise theaters, for example, the State Theater, which opened in the mid XIX century. It is still staging the most interesting theatrical productions of the classics and contemporary prose writers in the country. And the city can also offer a trip to the opera.

Szeged is known for a lot of sunny days, delicious buns, a developed economy and the fact that it is the capital of the proud medieval county of Chongrad. 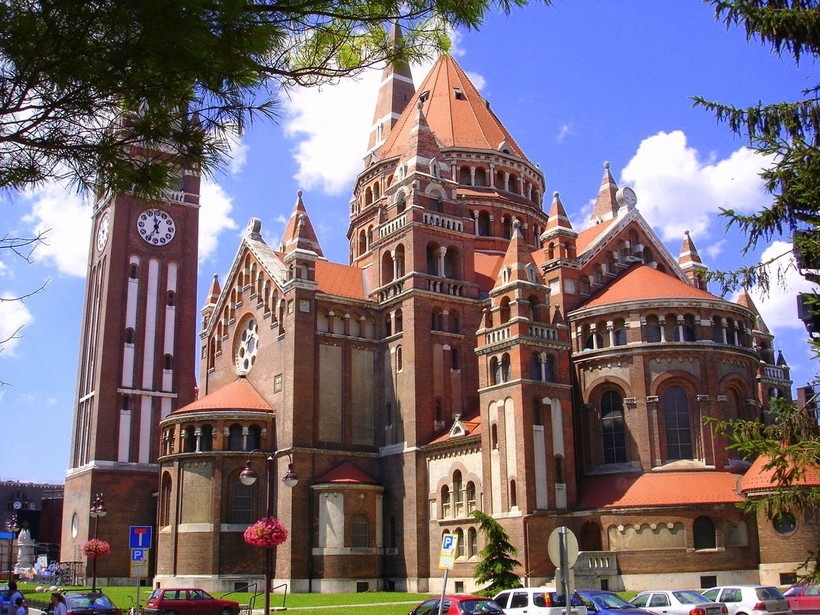 The architecture of Szeged is represented by several important buildings. Among them is the Cathedral, which is called the Temple of the Vow. It stands out for its interesting style – neo-Norman. If from the outside it is a pleasant surprise, then inside it is a delight. There is a large organ and many interesting exhibits, including musical instruments. The main attraction of the Temple of the Vow is its own interior, which does not repeat from hall to hall. You have to walk here for more than one hour, so the cathedral can compete with the Hermitage.

To appreciate all the beauty of Szeged is worth a visit to Tisza Lajos Boulevard. A majestic palace is built here, there are many large columns, wonderful facades, admirable buildings. The palace is decorated with golden ornaments, the balconies are executed in “peacock” motifs. Even the doors and doorways of the palace are the subject of art, which is impossible to look at without shuddering.

Sopron is loved by tourists from Austria. Clean air and amazing atmosphere of the city combined with the oldest vineyards in the country make the city a must-see. 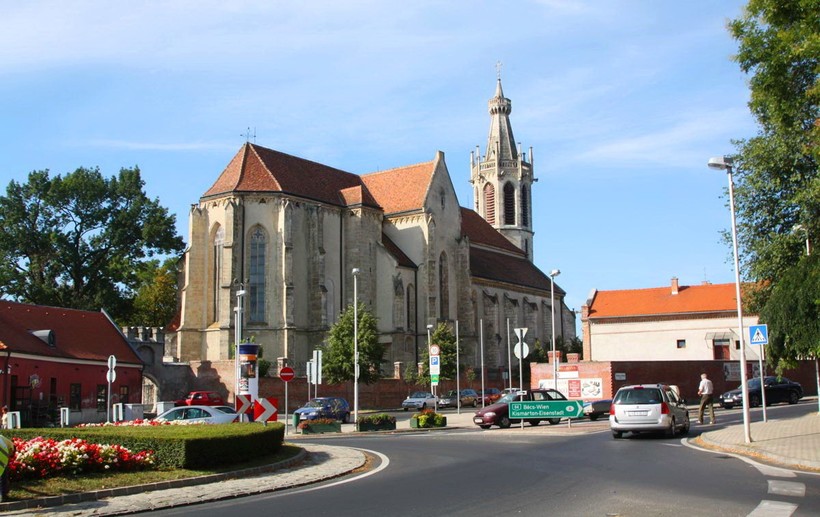 The love of Sopronians for their hometown is unbelievably great. And no wonder, because there are many architectural masterpieces. One of these is the world-famous Esterhazy, which is included in the top of the most expensive palaces in the world. Originally the palace was a small fortress with only 20 rooms. Of course, for the princely person of such an estate was not enough, so his son Miklos, decided to create a really large residence. To help him came famous artists and Italian architects. They created the project, the results of which can be admired today. In front of the residence there is a big fountain decorated with dolphins. Now the palace has about a hundred rooms. To add wealth to the palace, it was decided to cover its floor with marble tiles. The ceiling depicts ancient legends and myths along with dancing angels. The most luxurious and at the same time popular room was the music hall, the walls of which are covered with gilding. In the ceremonial hall is a fresco of Apollo. Tourists from all over the world come to see this interesting splendor. And it does not leave anyone indifferent.

Temple of St. George is also worthy of attention. Gothic style building was rebuilt after a major fire, and now it is clearly a Baroque influence. The Jesuits added two chapels, it was decorated with stucco ornaments. The church, like the Esterházy Palace, is also rich, especially in terms of interior decoration.

If you want to feel all the charm of ancient Hungary, you have to go to Eger. Here is a large fortress, which was built in the Middle Ages. 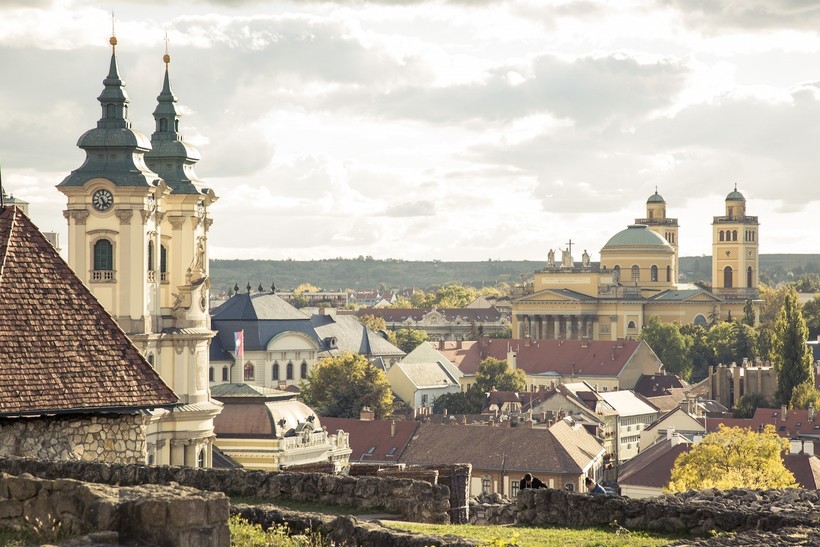 There is a museum in the fortress, where you can look at medieval artifacts and learn more about the history of the country. Many people come to Eger to learn archery. The atmosphere of the city is conducive to immersion in the art of mastering the bow. The city is famous for its wineries. The aroma of wine and grapes is in the air here, and there is gypsy music everywhere in the Valley of the Beauties, where the local wines are made. A truly unique city in many ways.