In Tingvellir we were lucky enough to get a tour led by an employee of the national park. We learned a lot of interesting things, and we hurry to share her story with you! If you’re going to Iceland, you should definitely visit the Tingvellir National Park, which is only 50 km away from Reykjavik.

First, a little background on this unusual place. Tingvellir or Tingvellir Valley (Þingvellir) is located in the west of Iceland. Layered mountains, rivers, lakes, waterfalls, a carpet of emerald grass – a fabulously beautiful place! It’s also very important to the country. Since 930 the Icelandic Althingi – the oldest parliament in Western Europe – has assembled here. In 1000 it was here that the decision was made to convert from paganism to Christianity. And it was in the Tingvellir valley that the independence of Iceland from Denmark was proclaimed on June 17, 1944. Besides on the territory of Tingvellir National Park there is a border between two parts of the world, because it is here where two continental plates – North American and Eurasian ones – converge. And Tingvellir became one of the places where Game of Thrones was filmed in Iceland – in the series the valley “played a role” of the Riverlands and the vicinity of the Eagle’s Nest. 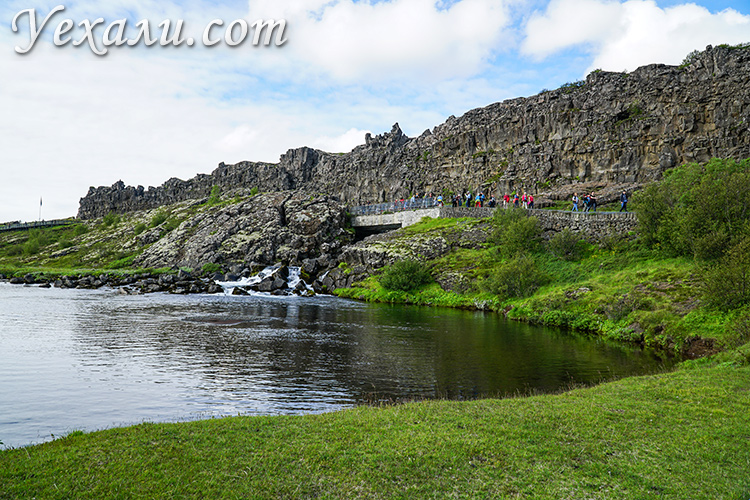 Tingvellir National Park, Iceland. Mountains, rivers, valleys – it has everything a tourist needs to shed a tear.

Now do you realize you just can’t miss this place on your trip to Iceland? Neither could we. Plus, Tingvellir is the first point of the super-popular “Golden Ring of Iceland” tourist trail, which besides it includes the Valley of Geysers and the Golden Falls of Gudlfoss.

Everyone on a tour! Hey, where is everybody?

Conquering the Golden Ring was planned for the second day of our trip to Iceland. We even purposely slept overnight at a campsite five kilometers from the entrance to Tingvellir National Park for a more convenient drive. After waking up in the morning to the swearing of the Hindus in the next tent and wishing them a speedy reincarnation, we went to the kitchen and saw the announcement: “Every day at 10:00 and 15:00 there are free tours in English around Tingvellir. Start from the church.” It’s 8:30 on the clock. Swallow your cookies and hurry up and drive!

As mentioned, Tingvellir National Park in Iceland is a very popular place. By the time we arrived, the parking lot was already packed with a dozen tour buses with groups from different countries. Parking for a car cost us 750 kroner (about 5 euros), and the entrance to Tingvellir was free. Forget cash in Iceland: the parking meter only accepts cards. Near the parking lot we found a map of the national park with all the major sites. As it turned out, it was a five-minute walk to the church. We made it! By the way, this is the beautiful road tourists take to enter Tingvellir National Park: 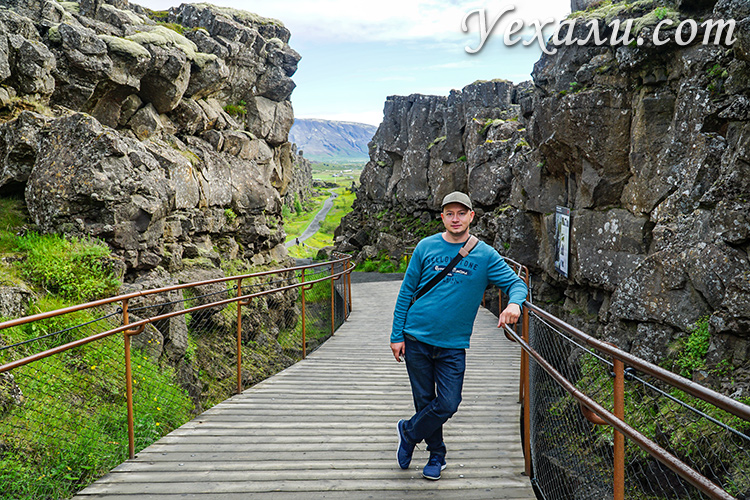 The entrance to Tingewellir. It’s a promising start! 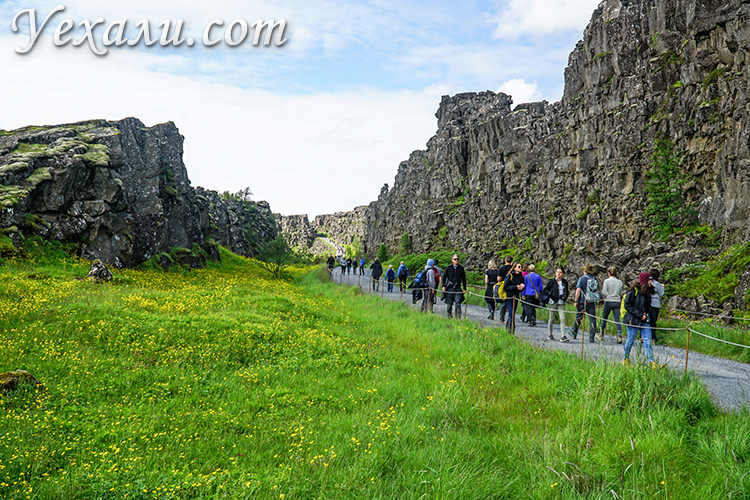 The view of the valley from above is simply magical! And here is the church, in one of the modest houses next to it is the summer residence of the Prime Minister of Iceland: 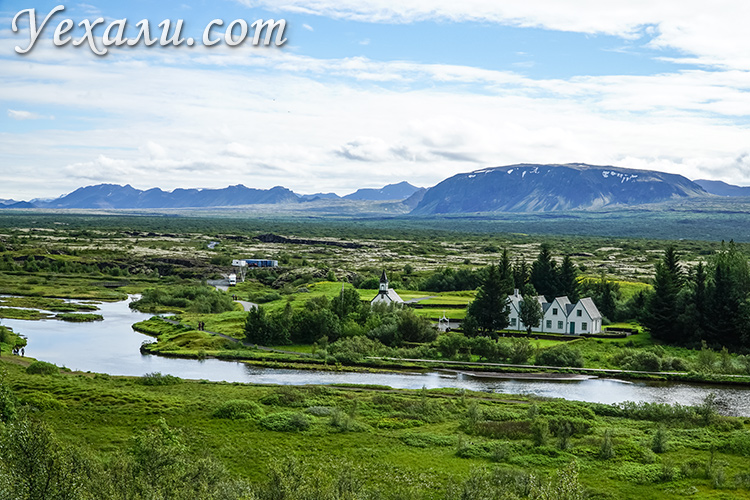 Going down below, here’s what it looks like up close. An ascetic northern beauty.

Despite the popularity of Tingvellir National Park, there were only a few people outside the church at 10:00. Our guide was a female employee of the national park, a woman of about 50 with a traditionally unpronounceable Icelandic name, which we, to our shame, could not remember. But as they say, what’s in my name when there’s a photo of you? 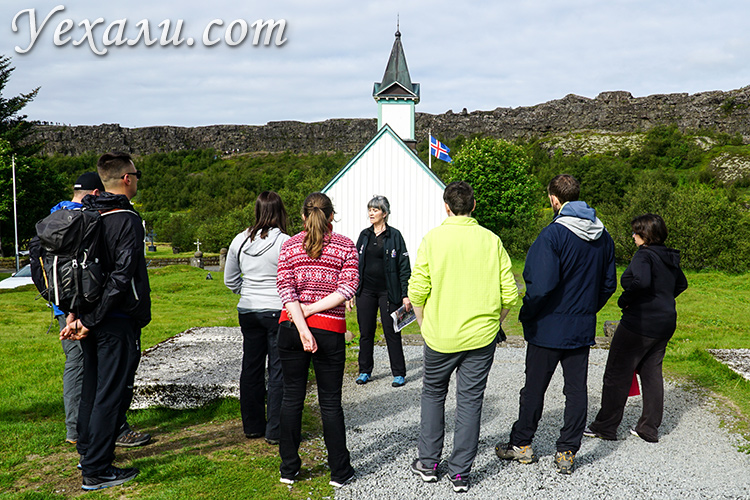 Our guide talks about the famous Icelandic poets buried near the church.

The guide admitted right away that she was very nervous: this was her first tour. So do not judge, gentlemen tourists, strictly. But jumping ahead, there was absolutely no one and nothing to judge: her English was impeccable, as was the case with all Icelanders we met, and our knowledge base was enriched not only with historical facts, but also very interesting stories. You read the background information about Tingvellir National Park in Iceland at the beginning of this article, but now I’ll tell you a couple of unusual stories from our wonderful guide.

The first story is about the very church near which our guided walk through the park began. It’s a masterpiece of northern Scandinavian minimalism. No golden iconostasis, no candles at a euro apiece, just simple wooden benches for 50 people maximum, modest decorations, and stars on the ceiling as a decorative element. Why stars? “Because it’s beautiful! – the guide explained to us. – Life in Iceland has always been hard, and one of the few joys available to our people was to admire the starry sky. Hence the stars.”

And on the wall are two icons, including The Last Supper, not by Caravaggio or Botticelli, but by a simple local farmer. He painted it in the XVII century, and as Jesus and the apostles, the farmer portrayed himself, his friends and neighbors. The man in the center of the table, I assume, was painted from himself (if I were him, I would do the same). A couple of centuries ago this icon was much liked by the visiting Englishmen, and they bought it and took it home. But then the Icelanders regretted that they had agreed to sell the shrine, and went to England in search of it. And what do you think: they did find the icon! Without much hope, the hikers asked the British if they could take the icon back to their homeland, where they greatly missed it. Well, what if? “Of course!” – the English made them happy, and the icon returned with modest Icelandic honors to a humble Icelandic church in Tingvellir National Park. Such is the story. 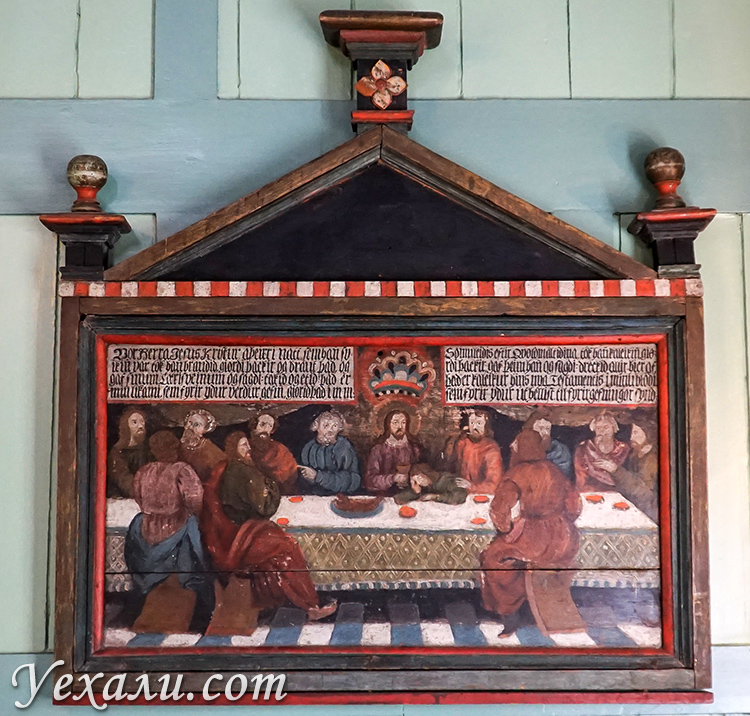 And the artist painted Judas from a neighbor who owed him 30 crowns. Just kidding. 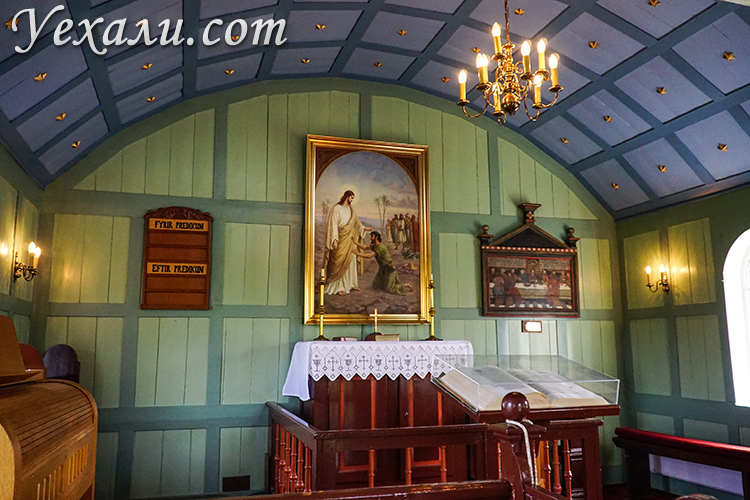 The stars on the ceiling of the church, symbolizing the joy of the common people.

We also learned from our guide where the Icelandic people came from. It turns out that in the IX century the first to settle Iceland were Norwegians, who left their country, not wanting to pay taxes to the new, not much respected king. On their way to emigrate, many of them made stops in the British Isles, from where they… uh… well, brought women with them. Whether all these women were willing to move to a harsh northern country with unfamiliar bearded men, history is silent. Presumably, the settlers took the most beautiful women with them (otherwise would they have made such a detour?). So now you know why Icelandic women are pretty and British women are not. And by the way, it turns out that the modern Icelandic nation is a rattling mixture of Norwegians and British islanders.

Do you know why Iceland has many “layered” mountains? It turns out that each layer was formed after another volcanic eruption. As many layers as a mountain has, so many eruptions it has survived. We learned that on our tour of Tinguellir, too. 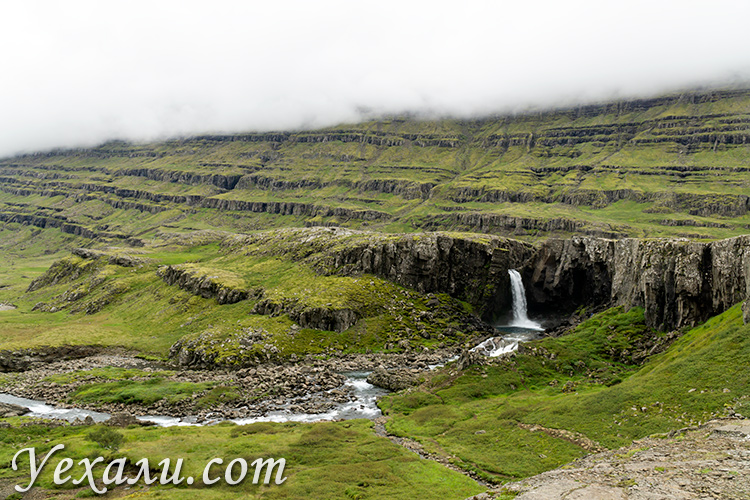 One example of “layered” mountains in Iceland. The photo is of Folaldafoss waterfall, Eastern Fjords.

And our guide ended the tour by singing us a song in Icelandic about Tingvellir National Park that they learned at school. Probably something like “My Motherland is Wide”. It turned out beautiful and touching.

My short review of Tingvellir

I’ll be honest with you: I liked Tingvellir National Park in Iceland, but I can’t say that it struck me to the core. Yes, it’s very beautiful, but beautiful places in Iceland are around every corner and Tingvellir is not the most mind-blowing of them all. But it’s definitely worth coming here. For two reasons.

1. Tingvellir National Park is close to Reykjavik and Keflavik International Airport and you should visit it before many other places of interest in Iceland. Glaciers, geysers, waterfalls – all this will come later, and for the beginning, while your brain is not boiling with excitement, Tingvellir will leave a very strong impression.

2. No matter how you look at it, this is the most important place for a country with a very interesting history . There is nothing beautiful about the ruins of all sorts of ancient cities at all, and yet we wander through them, admire them, strive to feel their history and special spirit. Well, Tinguellir has both a history and a special spirit. It also has beauty. 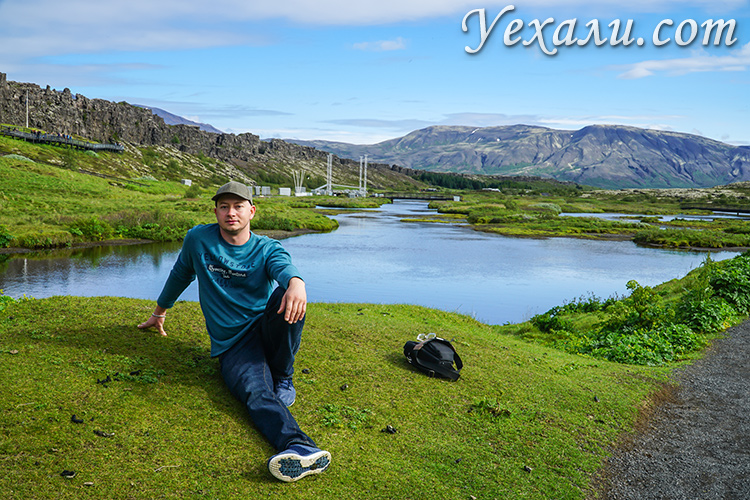 This is just so that after all these words and articles, you won’t think I haven’t been here and ripped everything off the Internet. 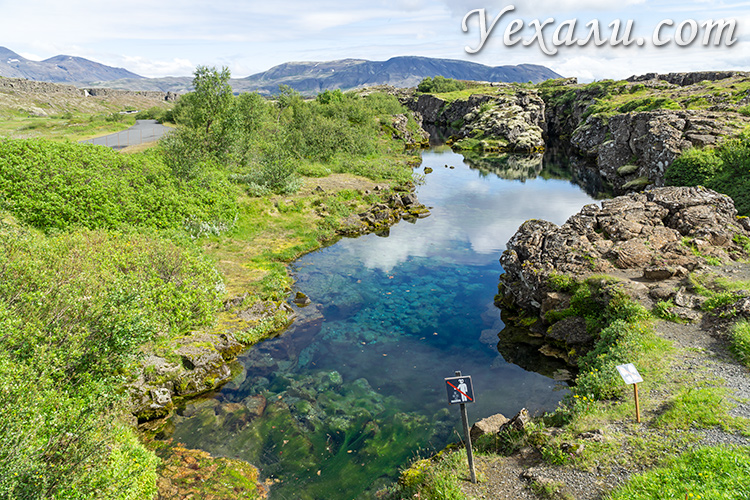 Tingvellir National Park is full of creeks and lakes filled with coin-operated tourists dreaming of coming back here. 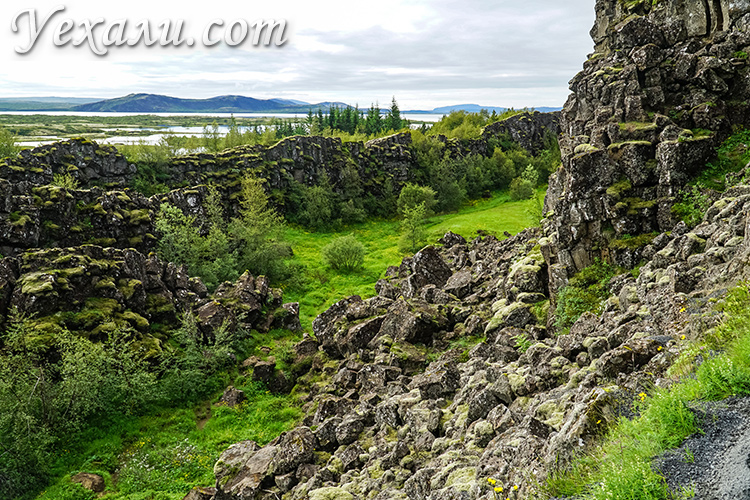 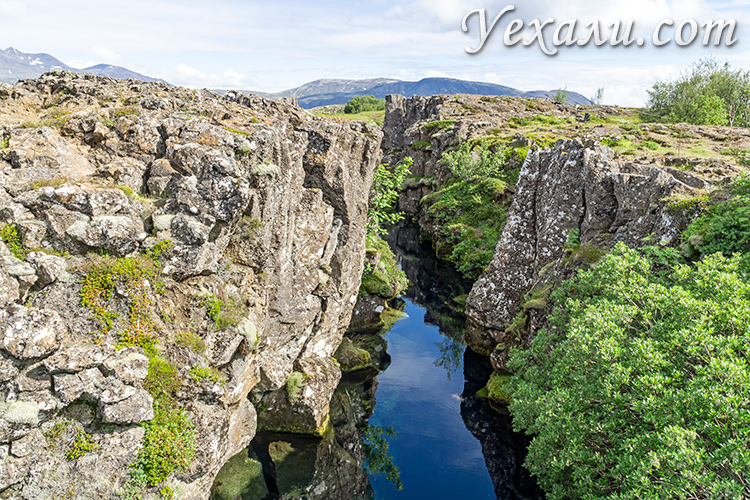 Where to stay near Tingvellir

Tingvellir National Park (or its environs) can serve as a residence not only for the Prime Minister of Iceland, but also for you. There are several hotels and campsites in and near the national park, one of which we stayed in ourselves. We have compiled a selection of lodging options near Tingvellir with excellent value for money and good reviews.

Have a great trip to Wonder Island! And don’t forget to read our Iceland articles – they will help you fully prepare for your trip.