Three places to visit in Madrid

Madrid’s greatest sights are now behind us. The long-awaited sightseeing of Plaza Mayor, Puerta del Sol Retiro Park, the best paintings of the Prado Museum and Queen Sofia has been accomplished. Already visited the stores on Gran Vía and ate chocolate. Checked out these and many other places of interest, which you can read about in the guide under the title “What to see in Madrid – The most important sights”, but still not enough? To learn more about an alternative way to see Madrid? 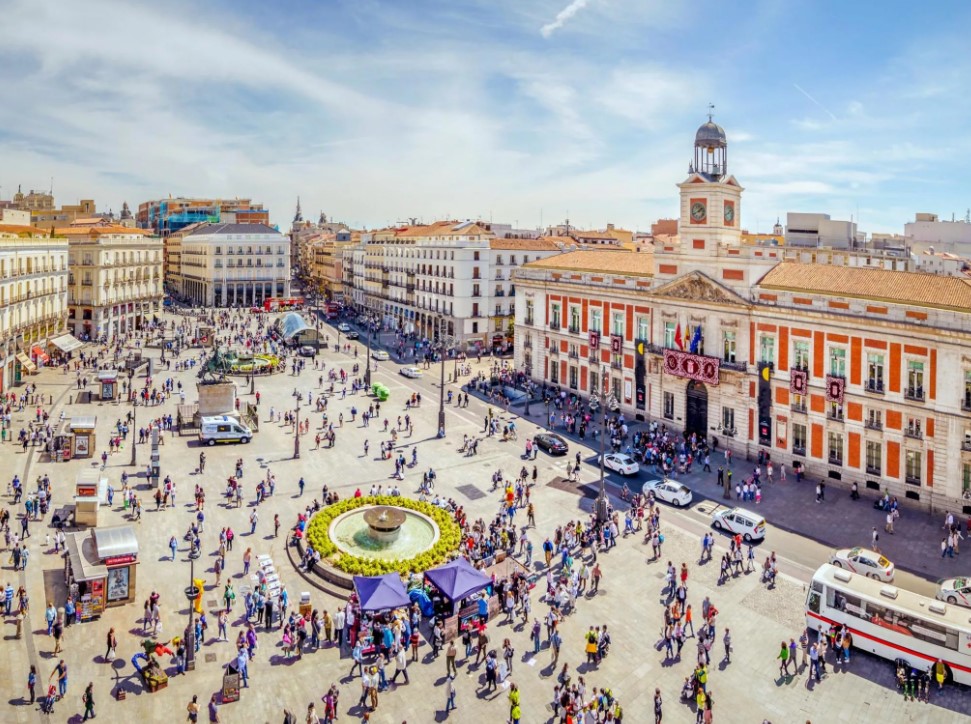 Three places to visit in Madrid

Madrid is a great city for a weekend getaway, but if you want to fully experience its charms, you’ll need to stay here a little longer and check out the places on this list! There are three sites that arose during the industrial development of Madrid, a former slaughterhouse, a tobacco factory and a power plant. So, go ahead and travel back in time and at the same time explore an alternative Madrid and its artistic world!

Of course, such a gorgeous city can’t offer just a few of the interesting places you can read about on the front pages of any guidebook. There are lesser-known attractions in Madrid , so walking around the capital and seeing the atmospheric sites and architectural features is an attraction in itself. Very often these (slightly younger) monuments are not noticed by tourists, although very often they are located in central areas of the city.

Oh, and one more thing! These are free sights worth seeing in Madrid! Thanks to this article you’ll discover some great places to visit without cutting your budget too much! Could it get any better? Let’s hit the industrial Madrid!

Matadero is Madrid’s old slaughterhouse and cattle market, built at the beginning of the 20th century. Once a suburb of the capital, the slaughterhouse is now part of the Arganzuela district. It is an excellent example of the industrial development of Madrid at the beginning of the last century. The area is huge, with about 50 neo-mudejar buildings. The slaughterhouse was supposed to supply the entire city and thus solve the problem of lack of hygiene and the spread of diseases caused by the abnormal animal husbandry of the inhabitants of Madrid. 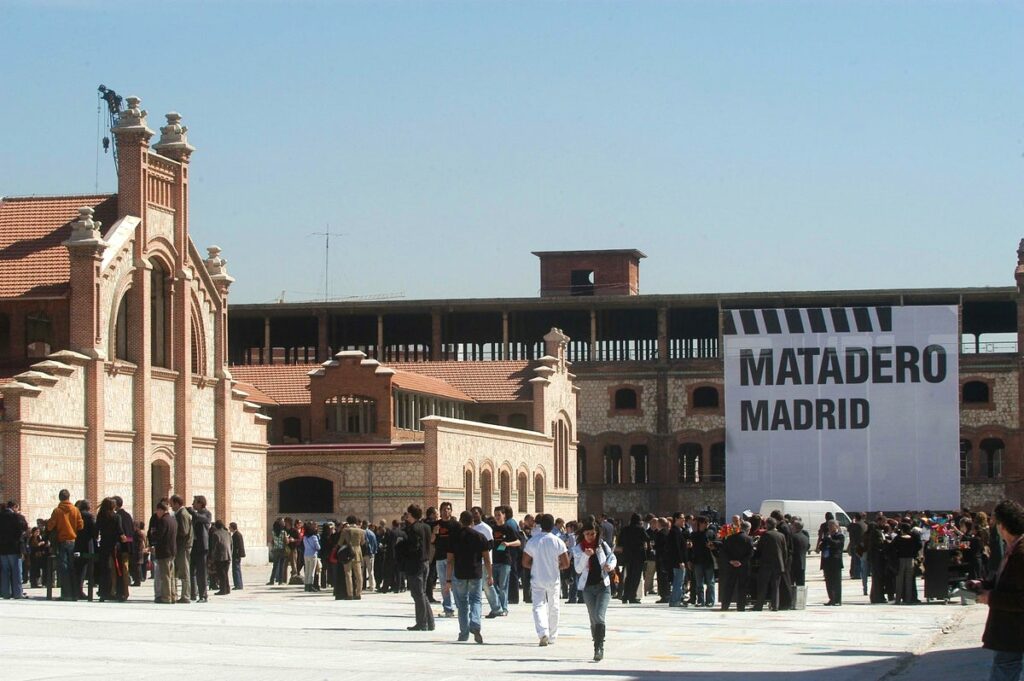 In the 1970s, the slaughterhouse was closed because it was already obsolete. After the death of General Franco, during its cultural heyday, its spaces were occupied by artists and people with a vision who wanted to creatively use the potential of the place. The city responded to this need late, only in the twenty-first century. Since 2011, Matadero, located in close proximity to Madrid Rio Park on the banks of the Manzanares River, has functioned as a unique cultural center . The buildings have been restored and today there are many different cultural institutions and spaces for temporary exhibitions, art workshops and theater events.

Matadero’s buildings include, among others:

– Cineteca is the only cinema in Spain that shows almost exclusively documentaries. It is a unique place for all lovers of the popular-science film genre; – Naves Matadero . Centro Internacional de Artes Vivas is a space where works in the performing arts, visual arts and music are presented; – Nave 16 is an exhibition space of over 4,000 square meters that has different functions. Depending on the need, it turns into an exhibition hall or a space for creative workshops; – Central de Diseo, a space dedicated to the promotion and development of industrial and graphic design. It is also home to the Mercado de Diseo, which sells home goods and clothes from local designers; – Casa del Lector – a former cow slaughterhouse has replaced … a literary research center. Its goal is to teach reading and spread it to all age groups. It also hosts meetings with authors, exhibitions and workshops. 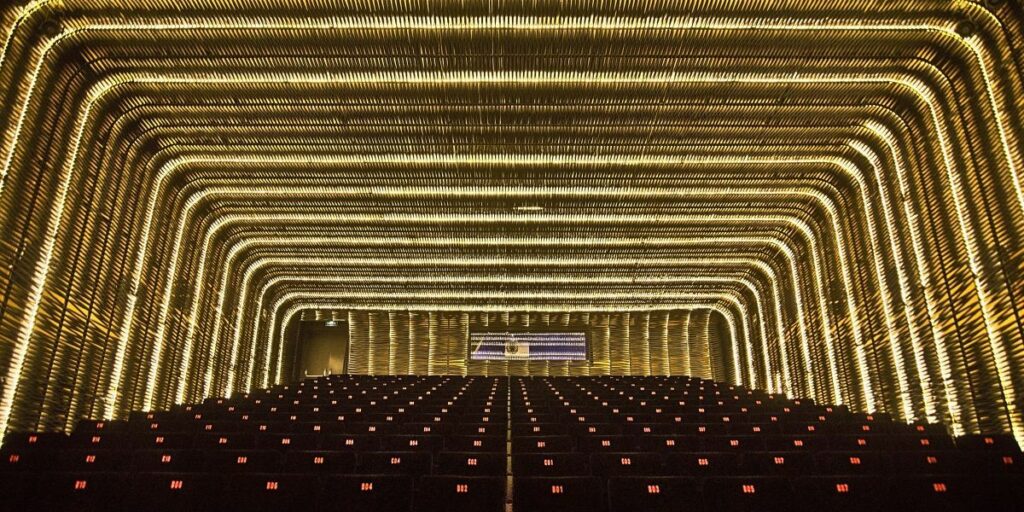 And these are just some of the Matadero venues in Madrid. It is also easy to find places to eat in the former slaughterhouse, La Cantina and Cafetera de las Naves . In the summer, the main square hosts a summer movie theater and a market for local food producers and artisans.

A program of current events can be found here. Where: Plaza de Legazpi 8 (map at the end of the article!) Metro: Legazpi (line 3) How much: admission to the Matadero area is free, but tickets to individual events (such as the Mercado de Diseo or screenings at Cineteka) are charged – you should check the price for the specific event you are interested in.

Another place that dates back to the industrial development of Madrid is Tabacalera, a former tobacco factory (Fabrica de Tabacos de Embajadores). It was founded earlier than Matadero, at the end of the eighteenth century. Specifically, the building was erected between 1780 and 1792. It was originally intended for the royal vodka and playing cards factory (a rather interesting combination, by the way). But quickly, from 1809 until the end of the 20th century, tobacco production became its primary function. More than 1,000 women worked here cutting and winding tobacco. The majestic four-story building, which once housed many inhabitants of Lavapiez, is one of the first examples of industrial architecture in Madrid. 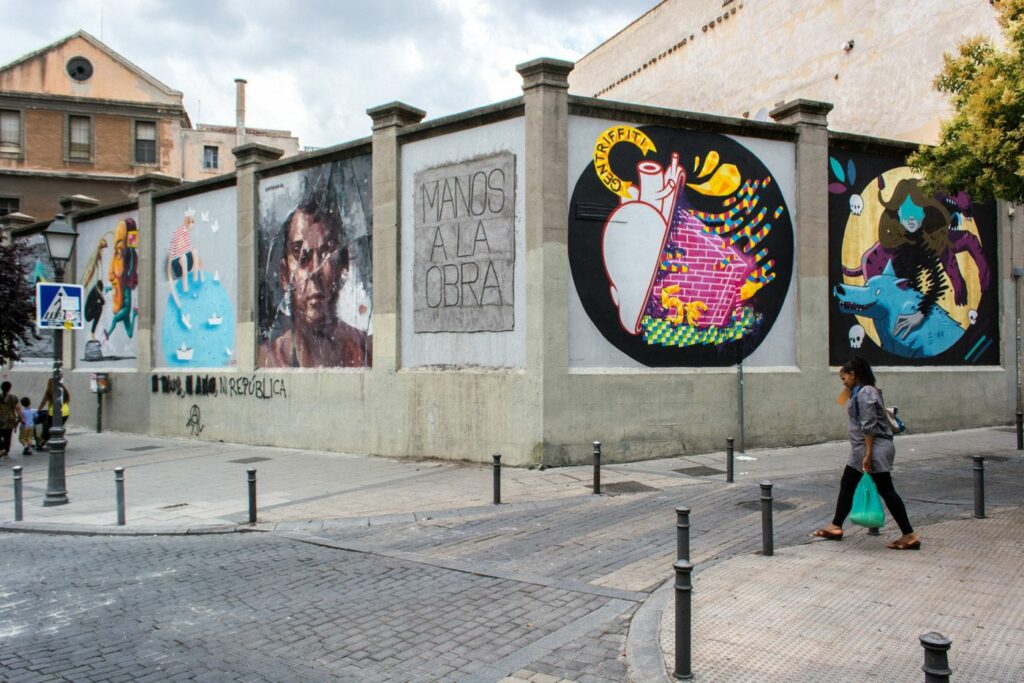 One of the most interesting spaces of Tabacalera is the Espacio de arte urbano.

The dilapidated tobacco factory didn’t finally close until 2000, when the company was privatized. The building, which had been deteriorating for ten years, was owned by the state. Initially, the government wanted to spend 30 million euros to renovate it. It was not (luckily?) abandoned because of a lack of money. The Tabakalera was only minimally restored, and today it resembles an artistic squat with cultural and social functions. The organization of life and activities in the Tabakalera is carried out democratically and events are always free and accessible to all. 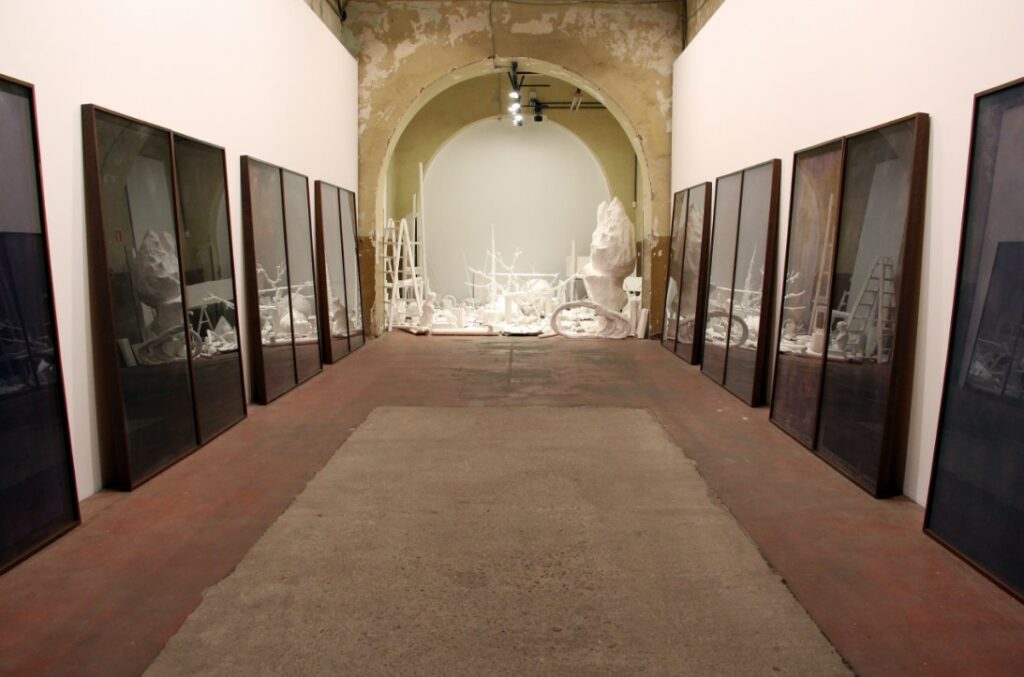 Like Matadero, this unique cultural center has several different venues . The first floor and basement of the building are divided into two parts.

READ
Famagusta - The most interesting city in Cyprus

Espacio Promocion del Arte presents temporary exhibitions of artists from all over the world, events related to photography and visual arts, as well as art workshops and residencies. There is a Main Hall where contemporary art exhibitions are organized . It is here that large-format works, including photographs, paintings, and site-specific installations are displayed. Interestingly, the hall has been renovated, but only to the point of being non-threatening to visitors.

Exhibitions can also be seen in other areas of Tabacalera.

As for the decor, nothing has changed . Here it is easy to find, for example, industrial scales or washbasins used by factory workers. Graffiti and other street art are abundant in La Tabacalera, giving it a unique character. Espacio de arte urbano, a space given over to street art, deserves special attention. The outer walls around the former factory have been transformed into a kind of art gallery with murals.

The second area is the Centro Social Autogestionado La Tabacalera de Lavapis (self-managed social center), where various cultural events have been held since 2010. These are concerts, workshops or meetings about literature. It is a favorite meeting place for residents of Lavapies and many others. Neighbors and artists try to maintain the space by organizing performances, exhibitions, discussions and even cooking together or neighborhood parties. All non-profit projects that meet the conditions of inclusion and create a community around them are welcome here. These initiatives have made Tabacalera the heart of a multicultural and diverse neighborhood.

The program of current events can be found here.

Where : Calle de Embajadores 51 Metro : Embajadores, line 3 How much : Entrance and all events are free

Another place on the map of industrial monuments in Madrid is Caixa Forum. It is located on the site of the former power plant on Paseo del Prado . Its location is an advantage and a disaster because hardly anyone remembers visiting this place, which is on the route of the Golden Triangle of Art, that is, the three world-famous museums located on Paseo del Prado, from the Museo Reina Sofia through the Museo Nacional del Prado to the Museo Thyssen-Bornemis. The hanging gardens at the Caixa Forum often surprise tourists strolling through the Paseo del Prado. The building, which dates back to the early twentieth century, was given to Caixa Forum Madrid in 2008. Today it has teamed up with the avant-garde, and … succeeded! Designed by Swiss architects Jacques Herzog and Pierre de Meron, it’s now a great place for cultural events. 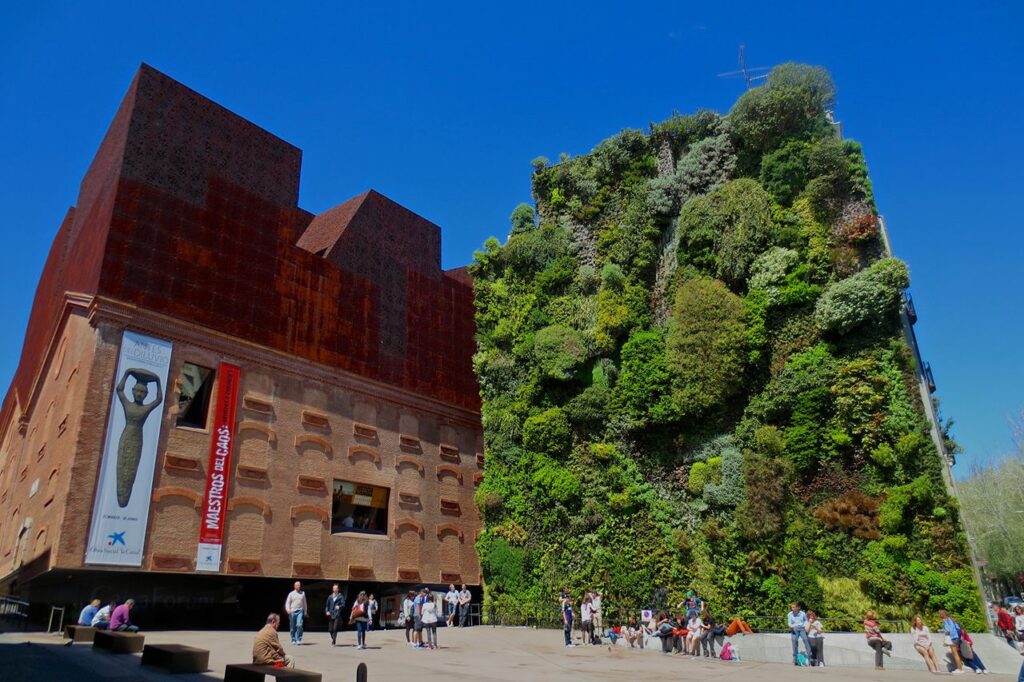 The suspended structure of the building’s body deserves special attention. Seen from afar the building seems to float above the ground. The architects, breathing new life into the former power plant, decided to transfer the weight of the building onto hidden inner supports. The effect was made possible by steel beams and a concrete structure.

The Caixa Forum even has an impressive staircase. The second and third floors of the Caixa Forum building in Madrid are the exhibition halls. The cafe and restaurant are on the fourth floor. But the greatest admiration is outside, in front of the building! We are of course talking about the impressive 24-metre vertical garden which covers the façade of the building next door. This work by Patrick Blanc consists of 15,000 plants of 250 different species. The plants are planted without soil, and their vegetation is made possible by water and supplied nutrients. This hanging garden is really impressive!