The world’s tallest hotels reach into the clouds, literally exceeding the heights of luxury. From New York City to Hong Kong, the most prominent developers and business tycoons are spending billions of dollars to create the most outstanding skyscraper hotels, which try to surpass every other building of the same type. They build sky-high, as if cities and countries were competing for the exclusive title of having the tallest superstructures (actually, they are).

Whether they are a source of national pride or just an unstoppable race for first place in the ever-competitive world of luxury tourism, hotels stop at nothing to create towers that include everything from presidential suites to casinos on their rooftops.

Most hotels are not so luxurious that they don’t accommodate less affluent travelers, although you’ll still have to spend a lot more than you’re used to at such hotels. Nevertheless, a few months of saving on everything you can, and you can afford to spend a few nights in one of the highest hotels in the world.

If you can’t afford to stay in one of these twelve modern wonders of architecture, you can at least enjoy contemplating the heights that the owners of these hotels have reached in the race to make their structure the tallest and most impressive in the world. 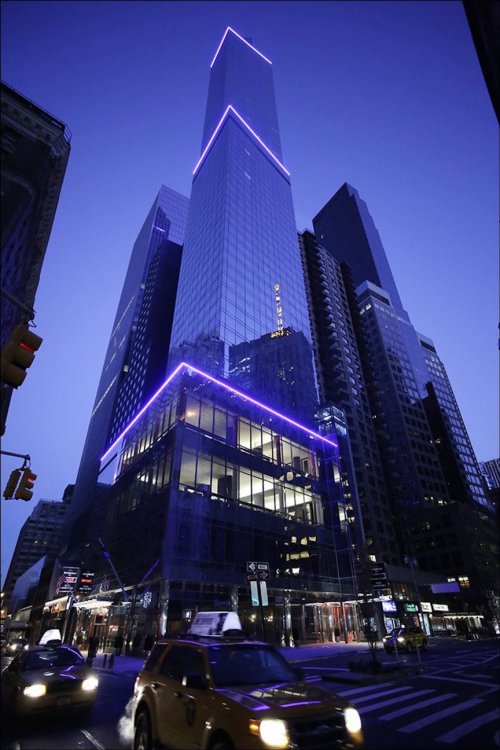 The building is made almost entirely of glass and includes some of the most expensive and luxurious rooms in the country. For example, you can rent a studio-type room with a large double bed and a view of Times Square for $460 a night. The building has 68 floors and rises to 230 meters. 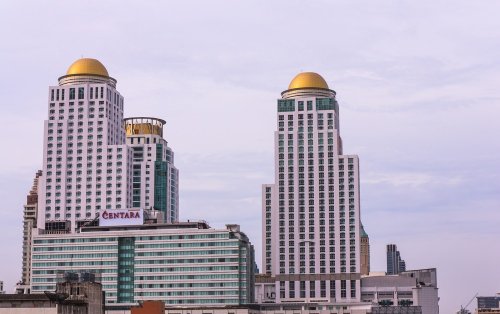 Centara Grand Hotel, Bangkok – 235 meters high The Centara Grand Hotel in Bangkok, Thailand is 57 stories and stands 235 meters tall. Its architecture incorporates some of the latest developments in modern design, including glass faceplates, circular concrete catwalks and horizontal connections in the building’s structure.

The building originally opened in 2007 as a banquet hall and venue for the Bangkok International Film Festival. However, at the moment the building is predominantly a luxury hotel with rooms of various sizes, from double and triple rooms to multi-room penthouses. 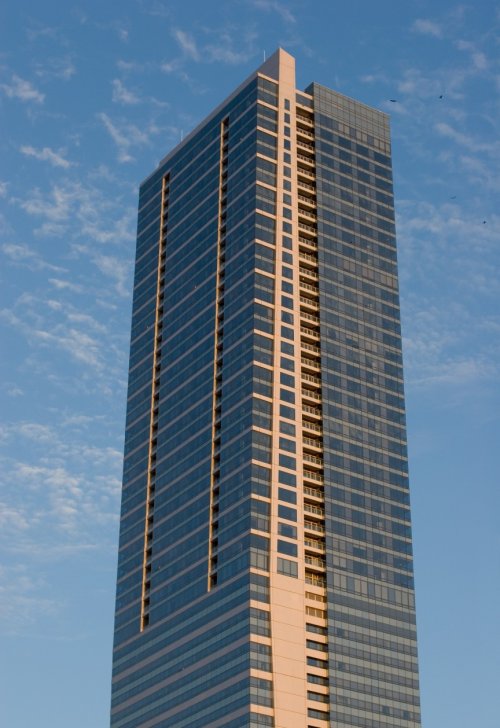 The Four Seasons Hotel in Miami is located in a multipurpose super tower. It rises 240 meters from its base. At the time of its completion in 2003, the tower was the tallest building in Miami and the state of Florida. Its height exceeded the height of the Southeast Financial Centre. 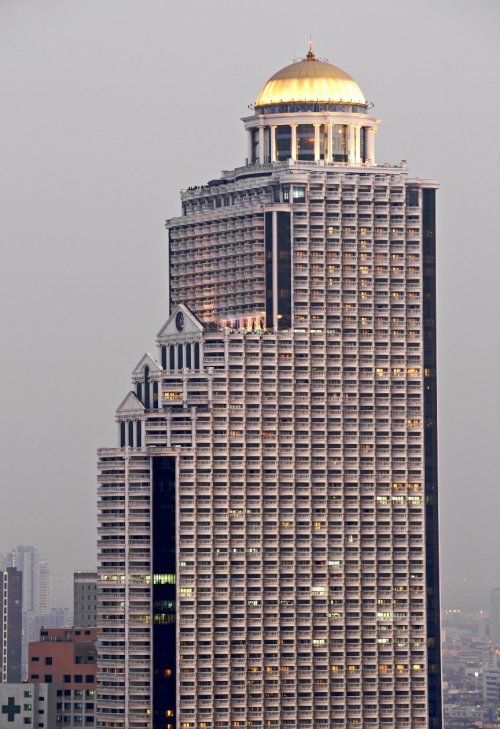 9. State Tower, Bangkok – 247 meters tall The State Tower skyscraper, also located in Bangkok, was completed in 2001. It is the third tallest building in Thailand and the second tallest hotel. The building has 68 floors and rises 247 meters above the city. This luxurious five-star hotel is called Lebua.

The hotel includes all sorts of modern amenities that customers who are willing to shell out a tidy sum for a stay there can expect. For example, swimming pools, fitness centers, and the Sirocco, the world’s tallest restaurant with panoramic views of the Bang Rak business district. 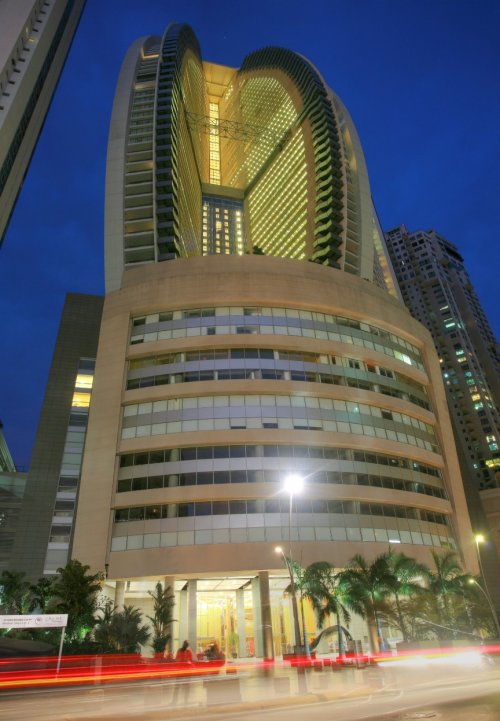 The 185,806 square meters of space house residential units, parking lots, restaurants, stores, a business center and a casino – all in addition to the hotel rooms themselves. Its construction cost $400 million. The building has 70 floors and rises 284 meters above the surrounding landscape. 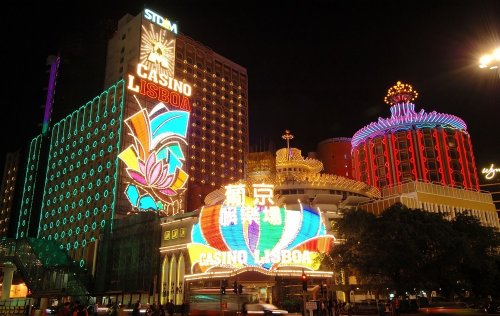 The building includes a casino, restaurants and hundreds of suites. This building is the tallest in Macau and the 118th tallest building in the world. In addition to the rooms themselves, the hotel’s reception and facilities are equipped with the latest in modern luxury. 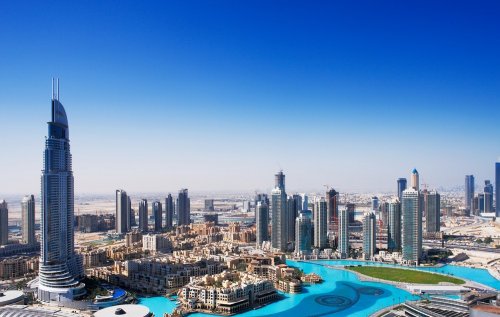 6. Address Downtown Dubai – 306 meters Almost all of the six tallest hotels in the world are located in Dubai, United Arab Emirates. This region has exploded with wealth and developments over the past decade, from skyscrapers reaching up to the clouds to man-made islands.

READ
The 6 Most Beautiful Places in Guadeloupe, France

The Address Downtown Burj Dubai is one of the tallest hotels in Dubai and sits on the sandy shore of the crystal-clear ocean. The art deco tower has more than 63 floors and rises 306 meters above the surrounding landscape. Even at 306 meters, it is still only the 6th tallest building in Dubai. 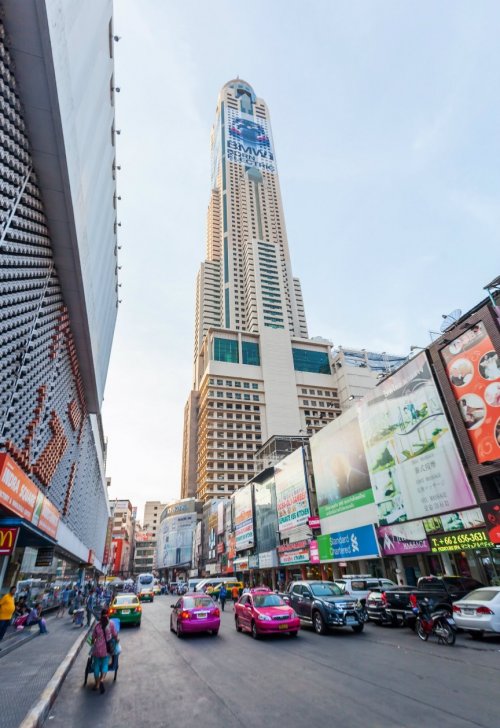 5. Baiyoke Tower II – 309 meters high The Baiyoke Tower II, located in Bangkok, Thailand, makes the modest surrounding office buildings as well as the Centra Grand Hotel seem dwarfed in comparison. It is the tallest building in the city, home to eight million people.

The Baiyoke Sky Hotel is the tallest hotel in Southeast Asia and the 7th tallest hotel in the world. The building has 85 floors and rises to a height of 309 meters. Its construction cost 110 million dollars. 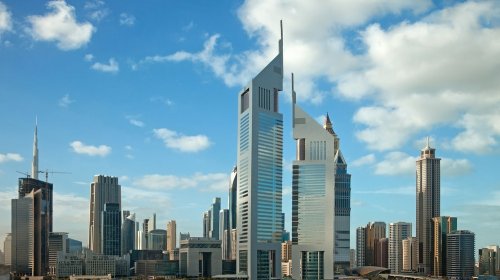 The building is considered the 48th tallest building in the world, yet it is the smaller of the two twin towers. At the time of its completion in 2000 it was the 4th largest skyscraper hotel in the world. 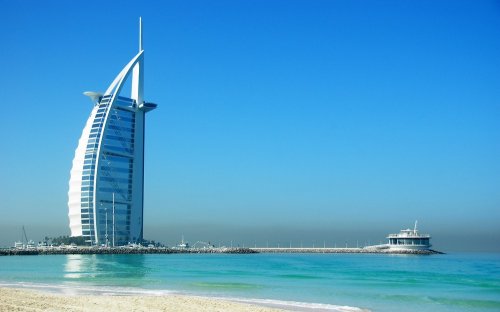 3 The Burj Al Arab – 321 meters tall As the third tallest building in the world, the Burj Al Arab, located in Dubai, is one of the most luxurious hotels in the city. The building is located on an artificial island adjacent to Jumeirah Beach and connected to it via a private bridge. It has 28 floors with more than 200 rooms, including the Royal Suite, which costs more than $18,000 per night (it’s the 12th most expensive suite in the world).

The building’s architecture (resembling a boat sail), decorations, and high-end amenities are available only to the richest of the world, those who can afford to pay that kind of money for a hotel stay. 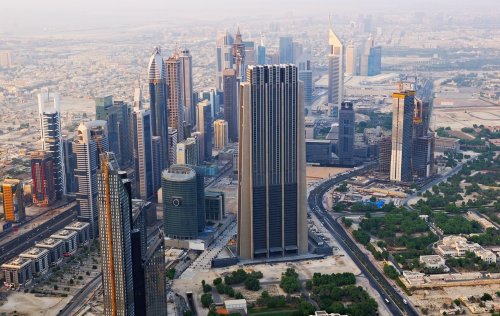 This building was completed in just three years, from 2004 to 2007. The hotel was opened to the public in 2009. This hotel-superstructure has 680 rooms ranging from standard rooms to penthouses. 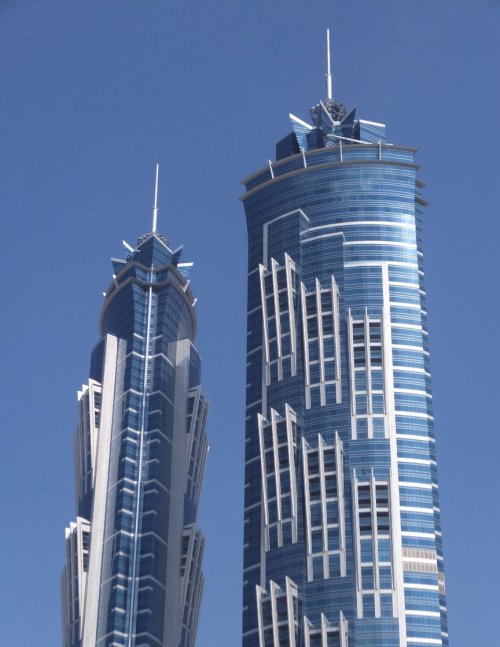 The hotel has 14 restaurants, health clubs, spas, countless bars, stores and more than 1,600 rooms, including 4 presidential suites. Staying in a two-bedroom penthouse can cost you more than $9,000 per night. Nevertheless, for guests with average incomes, the hotel offers many standard rooms. Still, even a simple room at this hotel will cost you $280 a night. On foggy or cloudy days, this hotel is often surrounded by clouds on all sides, giving guests on the top floors an unforgettable view.

10 Tallest Hotels in the World

These tall hotels around the world tower 1,000 feet into the sky. They offer breathtaking views and luxurious accommodations. From China to the United Arab Emirates, these unique hotels are truly unique lodging options. You will definitely live the high life when you stay in one of the highest hotels in the world. The Ritz-Carlton Hong Kong, located on the upper floors of the International Trade Center building, is technically the tallest hotel in the world. Enjoy a drink in the world’s tallest bar at 1,608 feet. The Ritz-Carlton occupies 102 to 118 floors of this Hong Kong skyscraper. It has an indoor pool, a spa and some great eateries. It offers easy access to Hong Kong’s most popular attractions. The Ritz-Carlton Hong Kong is now technically the tallest hotel on this list, but it does not occupy the entire building like the JW Marriott Marquis Hotel Dubai. So this Marriott location in Dubai is actually the tallest hotel in the world, taking up the entire building at 1,165 feet. This iconic hotel in the United Arab Emirates offers relatively affordable overnight accommodations. The hotel consists of two towers with a whopping 1,600 rooms. However, this hotel complex isn’t just a guest house; there are also 14 restaurants, plenty of meeting rooms, an outdoor pool, and a spa. 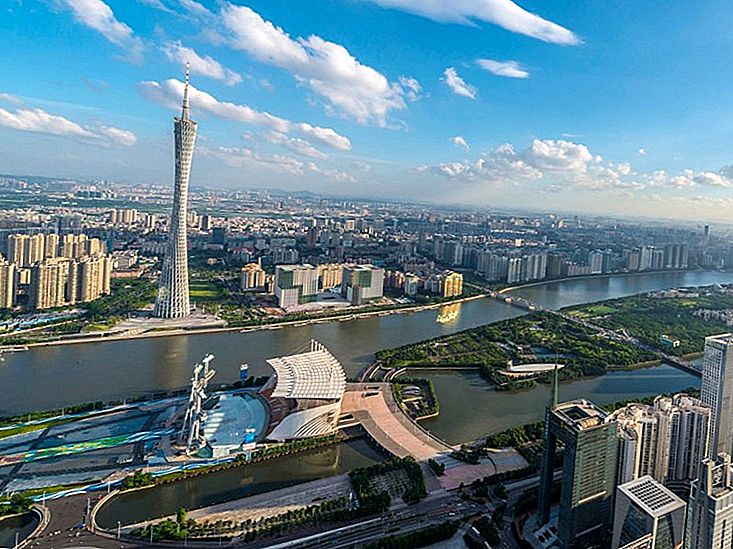 The Rose Rayhaan is another hotel in Dubai that made this list because it is known as the third tallest hotel in the world at 1,093 feet. Guests here can’t get enough of the rooftop pool, which offers incredible views of the surrounding city. The tallest room at the Rose Rayhaan Hotel is located on the 65th floor. Amenities here range from a 24-hour café, a variety of restaurants, and seven meeting rooms.

The Four Seasons Guangzhou Hotel is located in Guangzhou, China, on the upper floors of the IFC building in Guangzhou. Starting from the 74th floor to the 98th floor, it is an ideal accommodation option for business travelers. If you are lucky enough to stay here when the smog is out of the way, you can see the Pearl River and views of the cityscape. Climb to the 100th floor during your stay here to enjoy a seafood dinner at 1,400 feet. The higher, the better in Dubai. The third hotel in Dubai to make this list is Burj Al Arab Jumeirah. At 1,053 feet tall, this hotel with its unique sail-like design has become an iconic fixture in Dubai’s upscale hotel industry, which is considered a must-see in Dubai. The hotel is located on a private island beach. It offers spectacular views of the surrounding ocean. Spend your time down on the beach or up by the rooftop pool. One of the only 7-star hotels in the world, the Burj Al Arab is guaranteed to be a luxurious experience. For those who want to live the social life in Taiwan, book a room at the 85 Sky Tower Hotel, which stands at 1,240 feet. Located in Kaohsiung’s New Bay area, the view of the bay from your high-rise hotel room is breathtaking. This skyscraper hotel with basic rooms starting at $100 is one of the most affordable options on this list. Don’t forget to go up to the 74th floor, which is an observation deck that is perfect for photographing and viewing the facilities. Another hotel in China topping this list is the Park Hyatt Shanghai. The hotel itself occupies the top floors of the Shanghai World Financial Building, which reaches 1,614 feet in height. This Park Hyatt hotel overlooks the Huangpu River and has 179 rooms. Guests can take daily tai chi lessons in the courtyard or spend time at the pool, spa, gym or restaurants before exploring the famous sights nearby. The Baiyoke Sky Hotel in Bangkok is 1,014 feet tall. This tall hotel offers upscale rooms at an affordable price. Even if you don’t choose to stay here, you can still visit the rotating observation deck on the 84th floor, which guests have access to if you dine at Bangkok Balcony Restaurant, which is the tallest open-air restaurant in Thailand. 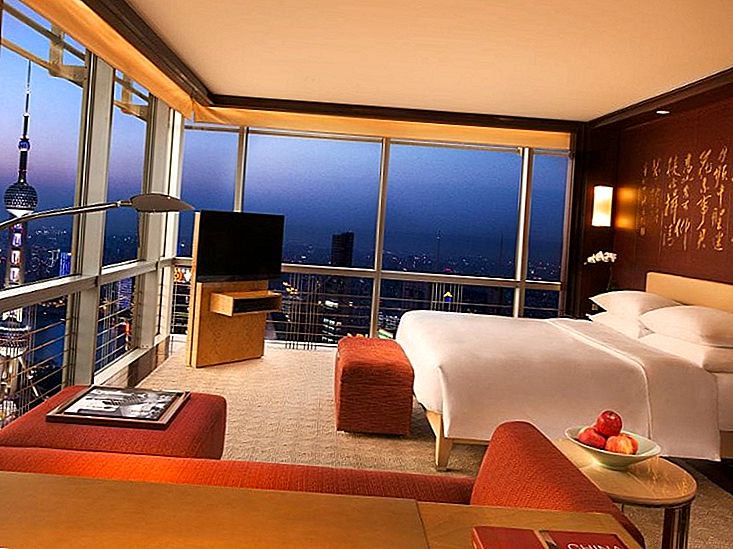 In Shanghai there is not one, but two of the highest hotels in the world. In addition to Park Hyatt Shanghai, the Grand Hyatt Shanghai made the list because it is 1,380 feet tall. If you decide to stay here, in the heart of the Pudong district, consider booking a corner room for optimal views of the cityscape. A unique fact about this hotel is that it is also home to the world’s tallest post office. Another hotel in China on this list is the St. Regis Shenzhen, which is located on the top 28 floors of the KK100 tower. Enjoy a workout overlooking this hotel’s fitness center, or book a room on the 90th floor or higher to feel like you’re on top of the world. On a clear day, guests here claim to have seen as far as Hong Kong. No matter which floor you stay on, rooms have floor-to-ceiling windows for your viewing pleasure.