Tremiti Islands: beaches, attractions, photos, what are the names, where are they and how to get there.

Tremiti is a place where the Adriatic Sea appears at its best and nature is wild and unpolluted.

Tremiti is 22 km from Cape Gargano and 45 km from the coast of Molise. The Tremiti Islands are part of the Marine Nature Reserve, located in the largest Gargano National Park. Especially for our loyal readers, we have created a useful guide to the Tremiti Islands with information about the most beautiful beaches, coves and attractions of each island.

Just off the coast of Gargano there is a true paradise, a bastion of tranquility where the only actors are the sea and nature. The Tremiti Islands are also known as the Islands of Diomidia, because, according to legend, the Greek hero Diomede is buried here. A trip to the islands will give an amazing cocktail of silence and tranquility, slowing down the pace and clearing the mind from the turmoil of big cities and everyday problems.

Termiti is the only Italian archipelago in the Adriatic Sea. It consists of six islands and several small reefs:

San Domino and San Nicola are the only inhabited islands of the Tremiti. The first, the largest, has beautiful beaches, ravines and coves. Cretaccio is a large rock with numerous small coves and gorges, an ideal place for canoeing.

The sights of the islands

San Domino is the largest island of the Tremiti Archipelago, the most important and probably the most beautiful from a naturalistic point of view. Completely covered in Mediterranean scrub, it has only one sandy beach, Cala delle Arena, behind the port and several very small rocky coves.

To enjoy all the beauty of San Domino, you must take a boat trip around the entire island. There are numerous grottoes such as the Grotta del Bue Marino, the Grotta delle Viole, which takes its name from the purple-red color of the seaweed that covers the underwater part of the rock, as well as some others.

The historical administrative center of Tremiti is located on the island of San Nicola. Its rocky shores are decorated with medieval buildings. One of the most famous and important is the Abbey of Santa Maria a Mara, founded by Benedictine monks at the beginning of the 11th century. From the abbey begins a path that winds through picturesque places and leads to ancient necropolises.

Not far from San Domino is the small uninhabited island of Capraia, famous among divers. It is believed that here you can see some of the most beautiful underwater landscapes of the Mediterranean Sea. In the pristine waters of the archipelago, in addition to all that, there is the famous statue of Padre Pio. 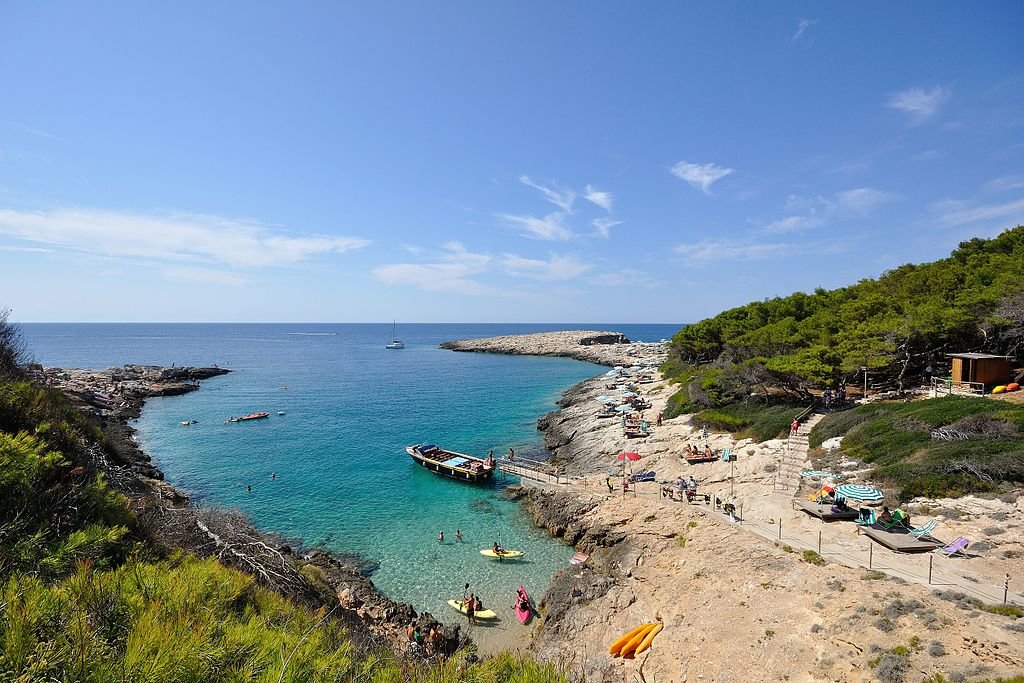 The travel time by sea varies from 50 minutes to 2 hours depending on the chosen means of transport. By helicopter, you can reach the archipelago in only 20 minutes.

The cost of the helicopter ticket:

READ
10 things to do in Portsmouth, UK

The 10 most beautiful beaches in Tremiti

What to see in Tremiti

Weekend in the Tremiti Islands

The Tremiti Islands are the only Italian archipelago in the Adriatic Sea. It consists of five islands (San Domino, the most famous, San Nicola, historical and administrative center, Capraia, Cretaccio and Pianosa) and several reefs of very modest size. They are 20 kilometers from the eastern shore of the Gargano Peninsula. They are connected to the mainland by ferries and helicopters. Their total area is less than 300 hectares, but it is a paradise for divers, lovers of romance and relaxation.

Only the islands of San Domino and San Nicola are inhabited. The most interesting dives await you on Caprae; the island of Cretaccio is only slightly larger than the usual reef, and Pianosa has been declared a marine reserve. It lies 20 kilometers from the main group of islands. The best dive sites are Punta Secca and Cala dei Turki on Caprae, Punta del Diavolo and Grotta delle Rondinelle on San Domino.

Shipwreck lovers should dive at Punta di Ponente and see the wreck of an ancient Roman ship from the 1st century BC, and at Cala degli Inglesi, where the Garibaldi paddle steamer Lombardetz sank in 1864.

The Tremiti Islands can be seen from the northern shore of the Gargano Peninsula with the naked eye, as they are only 12 nautical miles away. Since 1989, the archipelago was declared a Marine Park. It includes the islands of San Domino, San Nicola, Capraia as well as the islets of Cretaccio and La Vecchia. The island of Pianosa is the furthest away.

San Nicola is the historical capital of the Tremiti Islands. The tower of San Nicola and the abbey of Santa Maria a Mare, with its mosaic floor and massive walls, towers over the island. From the elegant courtyards of the abbey begins a picturesque path that winds around the entire island, leading to ancient Greek necropolises.

The lighthouse of San Domino is the symbol of this largest island of the archipelago, covered with thickets of Aleppo pine. There are caves in the coastal cliffs, which can be accessed only by boat. The Grotta del Bu Marino cave and the Punta del Ponente, near which an ancient Greek shipwreck sank, are worth a visit.

Capraia Island is located near San Domino. It is an uninhabited island with pristine nature, a true paradise for divers. The most famous places for diving are Punta Secca and Cala dei Turki.

In the entire Tremiti archipelago there are more than 50 dive sites. Among the diving schools is very popular Scolo del Elefante (“Elephant Reef”). Diving here is simple (ideal for beginners), and if you dive at night, you will have an unforgettable experience. 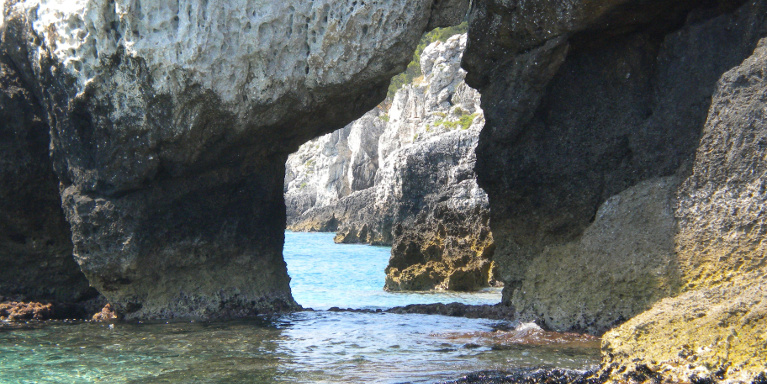 The most famous dive sites are on the island of Capraia. They are called Punta Secca and Scolo del Corvo (“Crow Reef”). 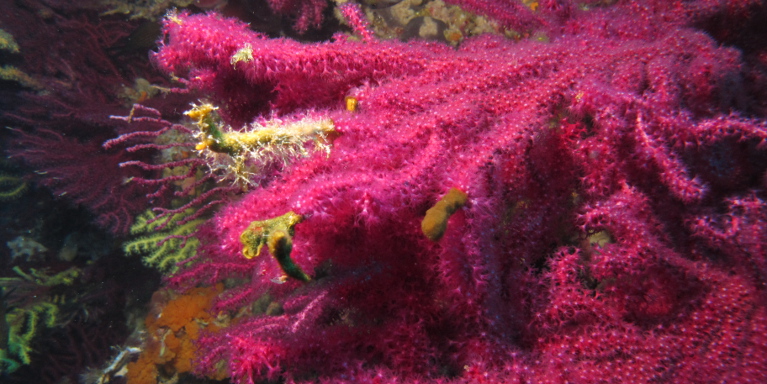 Moving along the underwater ridge at a depth of 35 m you will see the dense gorgonian bushes and at a depth of 42 m there are two underwater arches. The walls and bottom are covered with thickets of black coral. Lobsters, various sea fish such as catfish, seriola, grouper and many other species are hiding everywhere.

Near Scolo del Corvo you can see an abundance of Parazoanthus polyps, sponges and other forms of marine life.

But the most interesting thing is at the base of the rock, where the alcyonarians (eight-rayed corals) grow densely, covering the entire bottom as a continuous carpet. 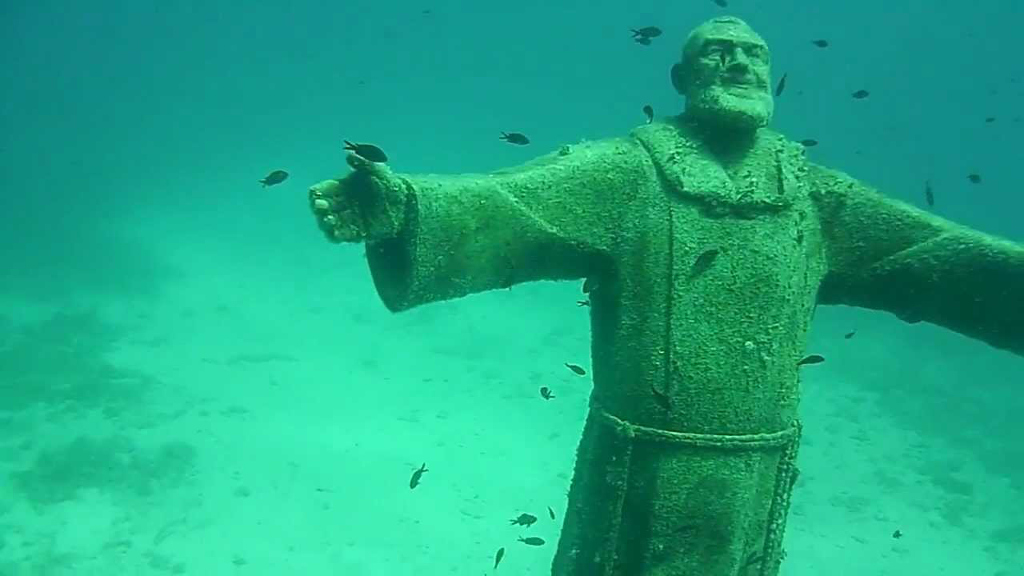 Near Punta Secca there are many other interesting places for diving. Thanks to the sea current, algae breeds well here, attracting many wading fish.

At the base of the rock there is a cave where you can usually catch a large lobster at rest.

The abbey was built by Benedictine monks on the island of San Nicola on the sea-facing side of a high cliff. 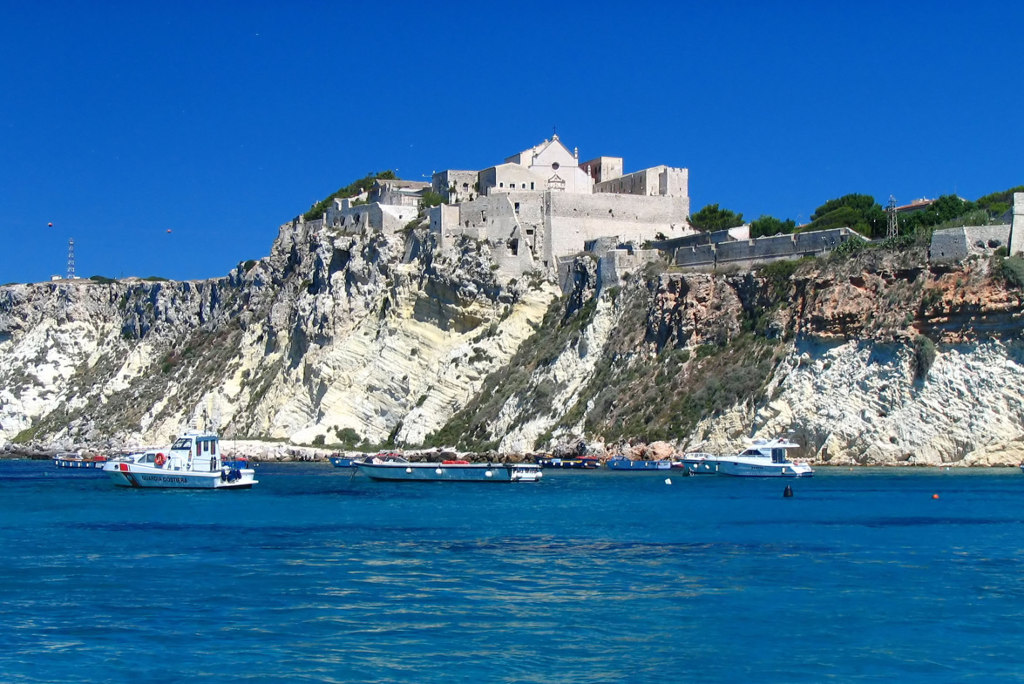 The original medieval building was rebuilt in the 15th century. The old façade was replaced by the one we can see today, made of stone from Istria. The portal is decorated with bas-reliefs of the Virgin Mary with saints and cherubs.

The original three-nave rectangular layout of the building has been preserved. Inside, there are artworks of great artistic value: a wooden Byzantine cross, a wooden statue of the Virgin Mary and a polyptych by a 16th century Venetian artist.

The 11th-century mosaic floor, which is preserved in its original form in the center of the building, is of great value. The mosaic depicts an eagle, a vulture and a lion, symbols of Christ’s power.

The islanders have changed a lot over the years the traditional Mediterranean cuisine. Naturally, it uses mostly local products. For gourmets this is a real find, because it is impossible to remain indifferent to the local fruits, meats and fish, vegetables, cheeses and soups with fragrant spices, growing only in this land of Puglia. The dishes are generously flavored with parsley, basil, garlic, cappers, origano and wild arugula. 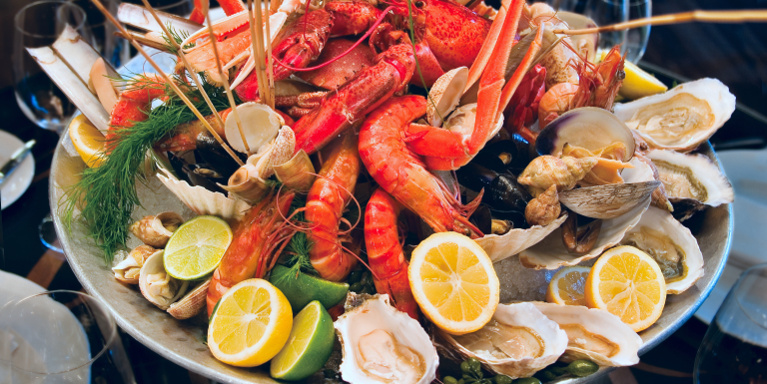 Fish is the mistress of the table here all year round, both fresh and as part of appetizers, soups, fried and grilled. On the islands you can always try fish caught on the same day. Seafood (clams and crustaceans) are also popular here, often served with a light side dish so as not to overshadow their own rich flavor. Pasta with seafood, often homemade, deserves a special mention. Spaghetti alle vongole (spaghetti with winkle shells) is the most popular dish in local restaurants. Another local specialty is green salad with capers, scallions, cherry tomatoes and pelamide, a fish with delicious white meat. 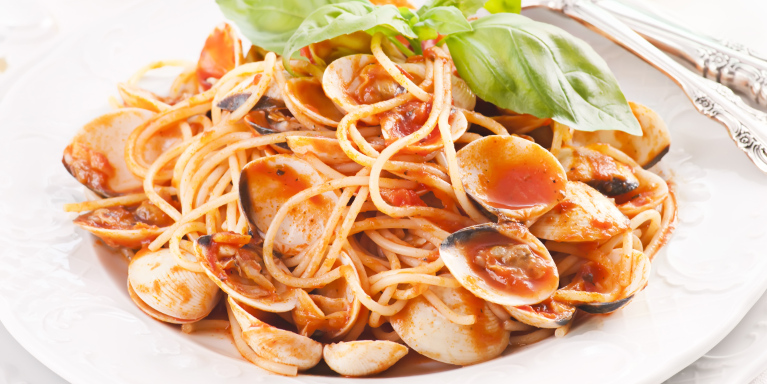 Once in the Tremiti archipelago, you will notice that the incomparable taste of the local cuisine is achieved by using the simplest ingredients, traditional also for Gargana cuisine: pasta and bread, which are always present on the table, are prepared according to ancient recipes handed down from generation to generation. The Dauno DOP olive oil, olives, capers, cherry tomatoes and eggplants, which are used to make aromatic appetizers, bruschetta and caponata, are worth tasting. 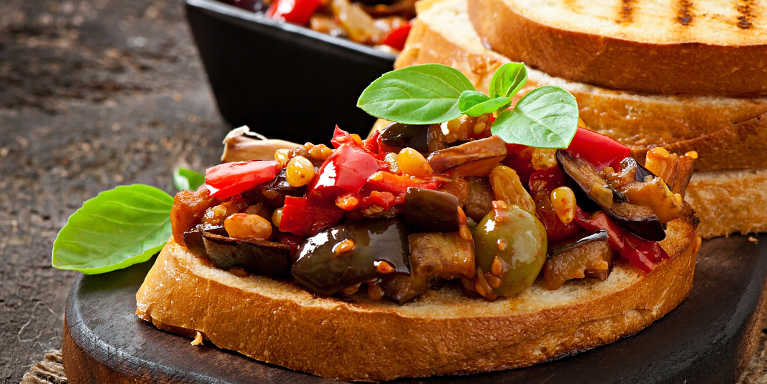 There are many ships, boats, ferries and hydrofoils to the Tremiti Islands from different ports in Abruzzo (Pescara, Ortona, Vasto), Molise (Termoli) and Puglia (Manfredonia, Vieste, Pescici, Rodi Garganico). Most flights during the year depart from Termoli. The travel time is from 50 minutes to two hours.

A helicopter leaves daily from Foggia airport for the islands. The travel time is 20 minutes.

On all islands except San Domino (where you also need permission from the administration) cars and motorcycles are prohibited. However, given the small size of the islands, you can easily do without a car.