Attractions of Paris – Top 40 amazing places of the French capital

“See Paris and die!” – Ilya Ehrenburg urges in his book. He was so captivated by the atmosphere of the city that he wished everyone to see the sights of Paris at least once in his life. In addition to historical monuments, people come here for the gourmet cuisine, tasting wines and cheeses, cabarets and strolls through the narrow streets of one of the most beautiful cities in Europe. 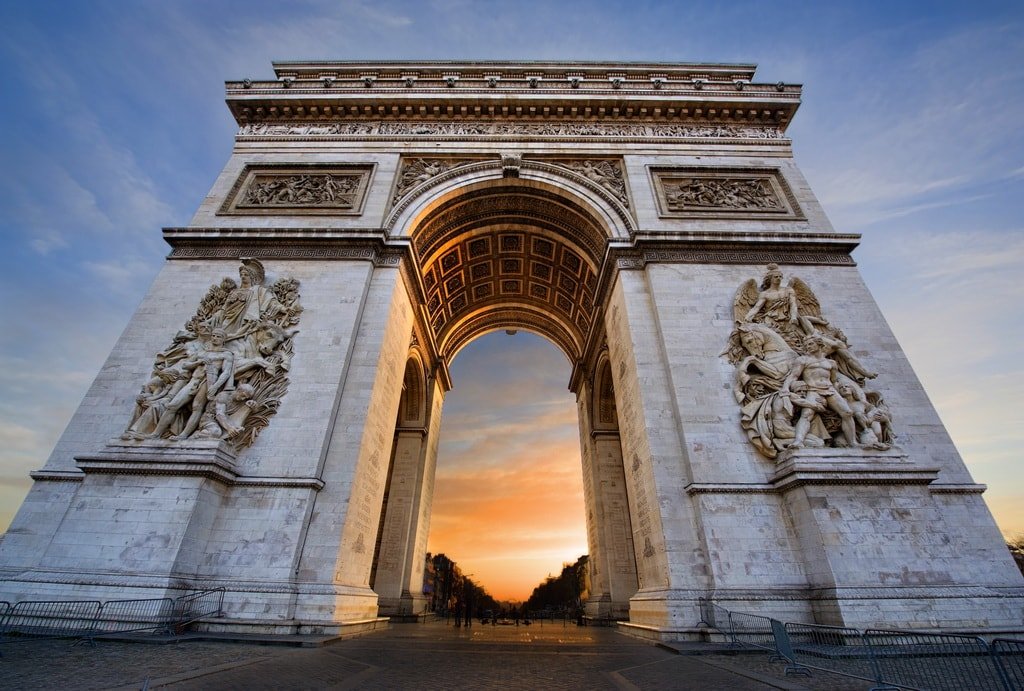 Arc de Triomphe was built in 1836 and dedicated to the victory of Napoleon Bonaparte at the Battle of Austerlitz. The four sides of the building are decorated with sculptural groups, above which the names of the thirty most brilliant victories of the French general are carved.

The structure is in the ancient style and corresponds to the Italian original of a similar arch in Italy, where it was erected during the reign of the Roman Emperor Titus. Unfortunately, Bonaparte never saw the final version of the monument – the construction was finished after his death.

And here, you will learn what to see in France. 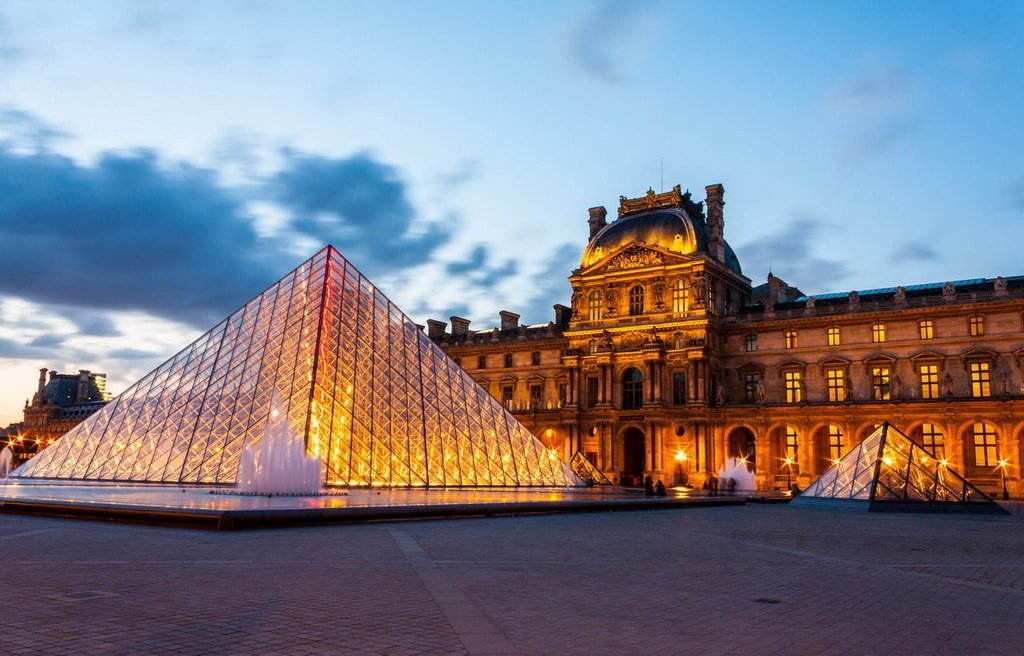 The Louvre Museum since the sixteenth century, served as a residence for the French kings. Louis XIV lost interest in the palace and opened a workshop for artists within its walls, and Napoleon Bonaparte added paintings from conquered territories to the Louvre collection. The appearance of this outstanding landmark of Paris is not accidental – the architects were inspired to create the prototype of the pyramid of Cheops by the Egyptian trophies of the commander, which formed the basis for the museum.

The museum contains more than three hundred thousand exhibits, thirty-five thousand of which you can freely look at – Leonardo da Vinci’s Mona Lisa, Jacques Louis David’s Coronation of Napoleon, the statue of Venus of Milos and Nike of Samothrace. 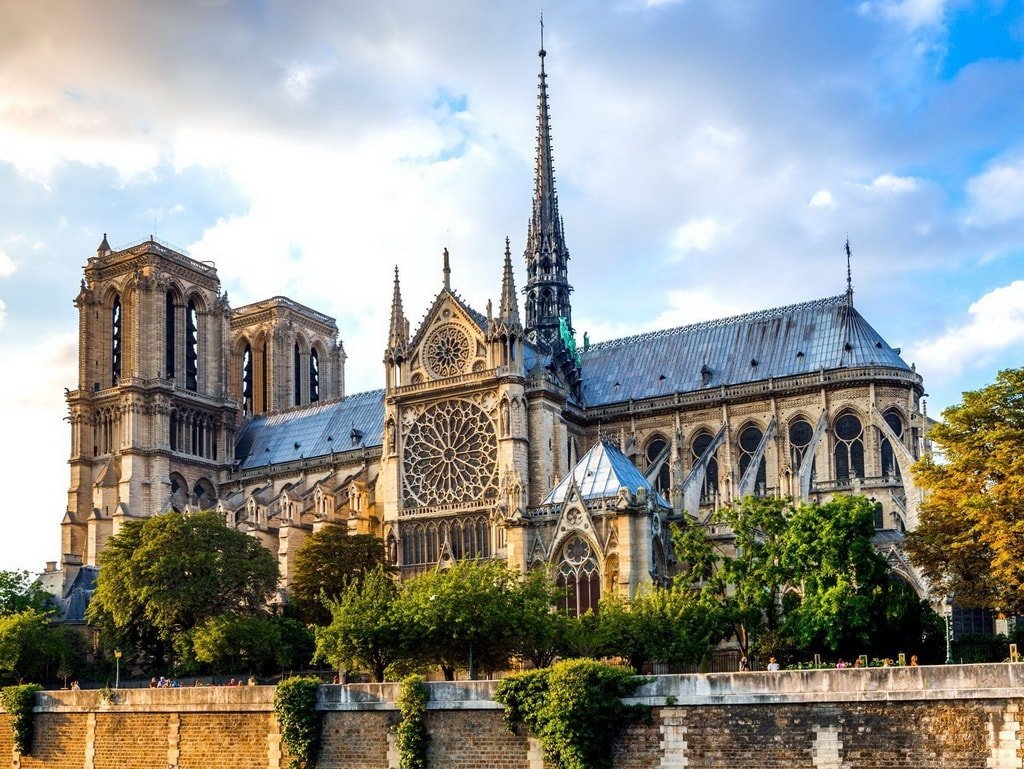 Notre Dame de Paris is glorified by Victor Hugo’s novel of the same name. Coronations, weddings and burials of emperors took place in the Catholic church; the first French Parliament met here; and the poor found shelter here. The construction of the famous church lasted almost 200 years – during this time it changed several leaders, each of whom rebuilt the temple to his own taste.

As a result of the reconstructions, the temple is endowed with a combination of Gothic and Romanesque styles. There are several legends associated with the cathedral – it is believed that a building of such unprecedented beauty can only be created by the devil himself. On the day when the wrought iron gates were finally finished, the castle did not yield to the architect until it was sprinkled with holy water. 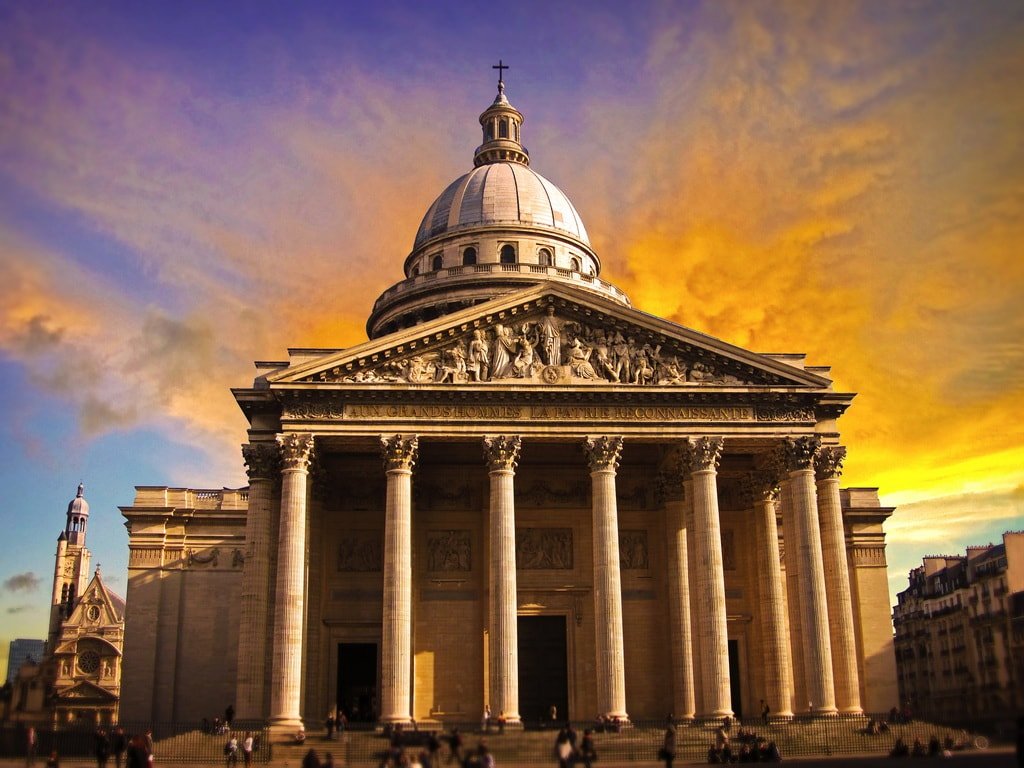 The Pantheon was a church in the eighteenth century and had a remarkable history. Louis XV, before assuming command of the troops, fell unexpectedly ill and, in view of the low level of medicine in those days, the only thing left for him to do was to plead for health with the Venerable Saint Genevieve. After some time the king recovered and promised to erect to her in gratitude for her help the most beautiful church in Paris.

However, during the Revolution, Christian temples were rapidly ravaged, and as a result, the temple was turned into a burial place for famous personalities. The ashes of Count Mirabeau, Victor Hugo, Raphael and other famous people of France are still kept within the walls of the Pantheon. 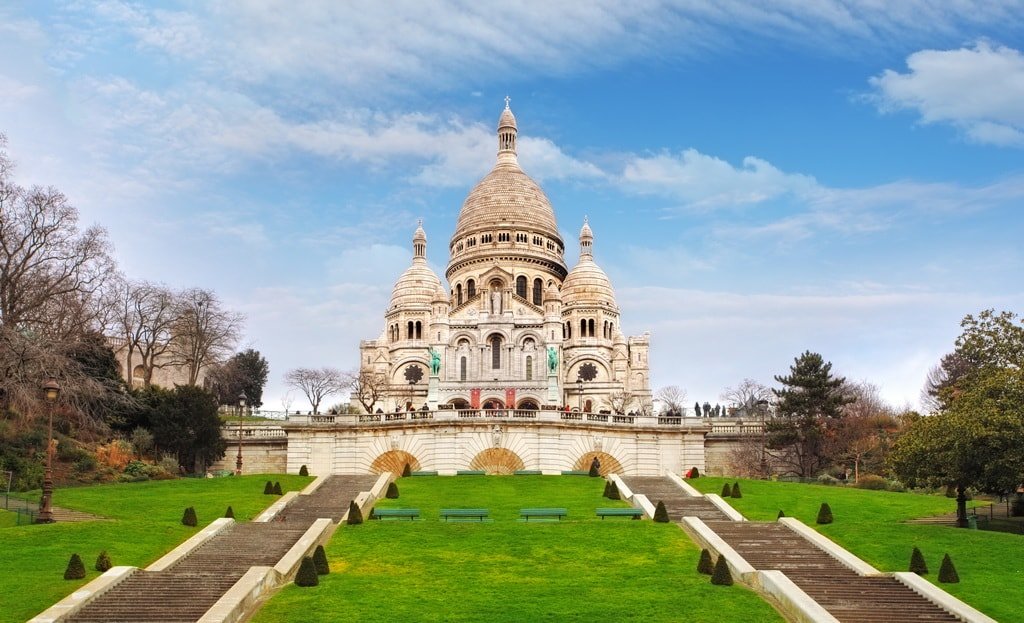 Sacré-Coeur Basilica is one of the most important temples in the country, built to commemorate the defeat in the Franco-Prussian War. It was believed that during the long years of moral decay, God had deprived the people of France of his blessing and a new church had to be built to atone for their sins – since then, the Sacré-Coeur temple has been one of the landmarks of Paris.

READ
The 30 best sights in Dublin - descriptions and photos

To get to the observation deck of the building, which is located at a height of four hundred meters, you will need to overcome 237 steps. Inside the building is decorated with stained-glass windows and mosaics, and outside – the statues of Joan of Arc, St. Louis and St. Peter. With the latter tourists have a tradition – if you want to return to Paris, you must stroke the foot of the apostle. 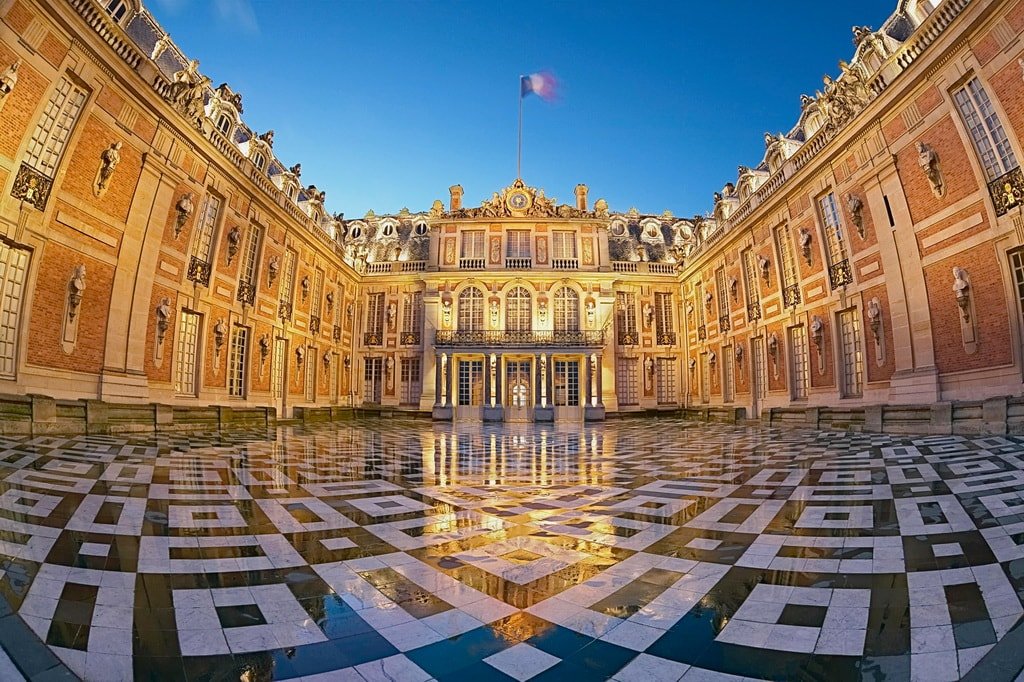 The Palace of Versailles was originally a small village near Paris and only then a luxurious château was built in its place for Louis XIV, who built it after rumors of a majestic castle of the Minister of Finance. In 1661, construction began on the palace, in which the king invested some 250 billion euros.

Symmetrical gardens and parks, fountains, flower beds and alleys, green labyrinths and antique sculptures adorn the area around Versailles. And the palace offers a magnificent view of the Grand Canal, which is adorned by the figure of Apollo emerging from the water and facing the building. 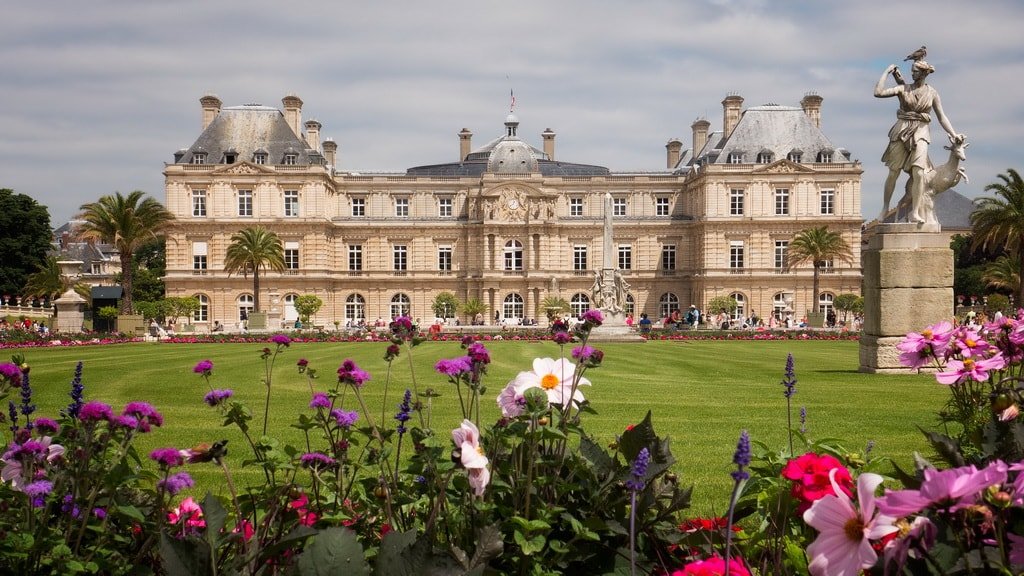 The Luxembourg Palace combines Italian and French styles. Maria de Medici hired Rubens himself to design it, who later painted a series of paintings about the queen as well. Later the castle became a prison for prisoners, and afterwards the residence of Napoleon Bonaparte.

The style of the palace, made in the spirit of the Renaissance and Baroque, has survived to this day. Nowadays it hosts parliamentary meetings and has a restaurant for tourists with national cuisine in the street. There are guided tours for adults and puppet theaters, rides, pony rides and other recreational activities for children. 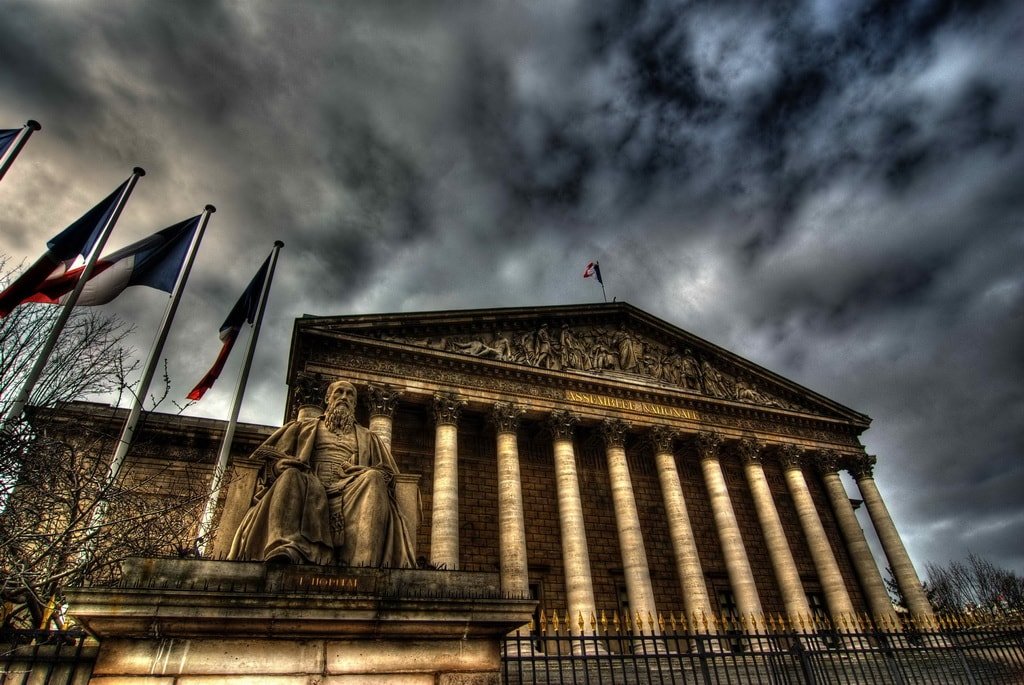 The Bourbon Palace was named after the ancient Bourbon family and was built for the daughter of Louis XIV. In 1756 it was bought by Louis XV, in 1798 Napoleon I ruled from here, and in 1814 Louis XVIII became its last owner. Today the French parliament meets here, but it is still open for visitors and tourists.

In the square in front of the palace were carried out executions of members of the royal family, and within its walls there are manuscripts of Jean-Jacques Rousseau and the case of Joan of Arc. The mansion is in a convenient location, so if you visit there, you can also look at the nearby Place de la Concorde and the Church of Saint-Marie-Madeleine. 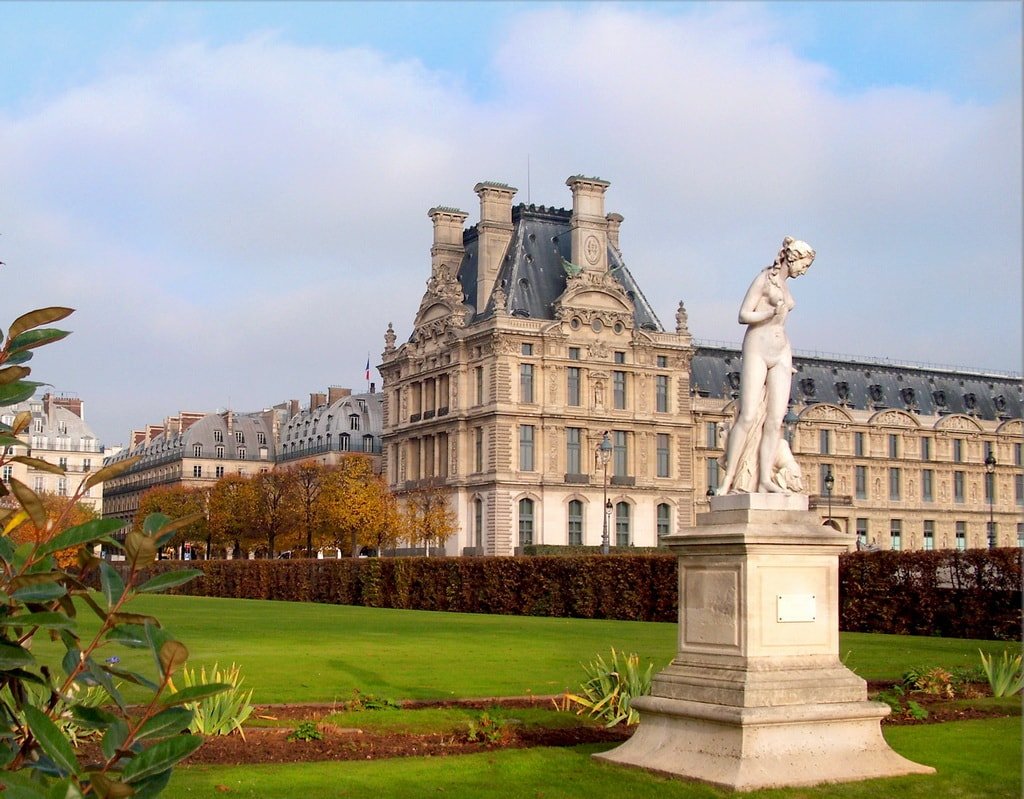 The Tuileries Palace began to be built in 1559 for Catherine de Medici. The Chateau Tuileries consisted of three pavilions, two of which have survived to this day. Like most ancient palaces, the Tuileries are also famous for bloodthirsty legends and ghosts. A powerful sorcerer who was hired by Catherine de Medici to massacre her enemies with black magic learned too many secrets about the queen.

To avoid the blackmail and potential threat from the wizard, the cruel ruler sent him to the gallows and imprisoned his body in the underground catacombs. However, after a while, the wizard’s corpse disappeared and began to terrify the palace’s inhabitants at night. The palace was the residence of Louis XVI and Napoleon Bonaparte. After the burning of the palace in 1871, little was saved, but a few of the surviving structures can still be viewed. 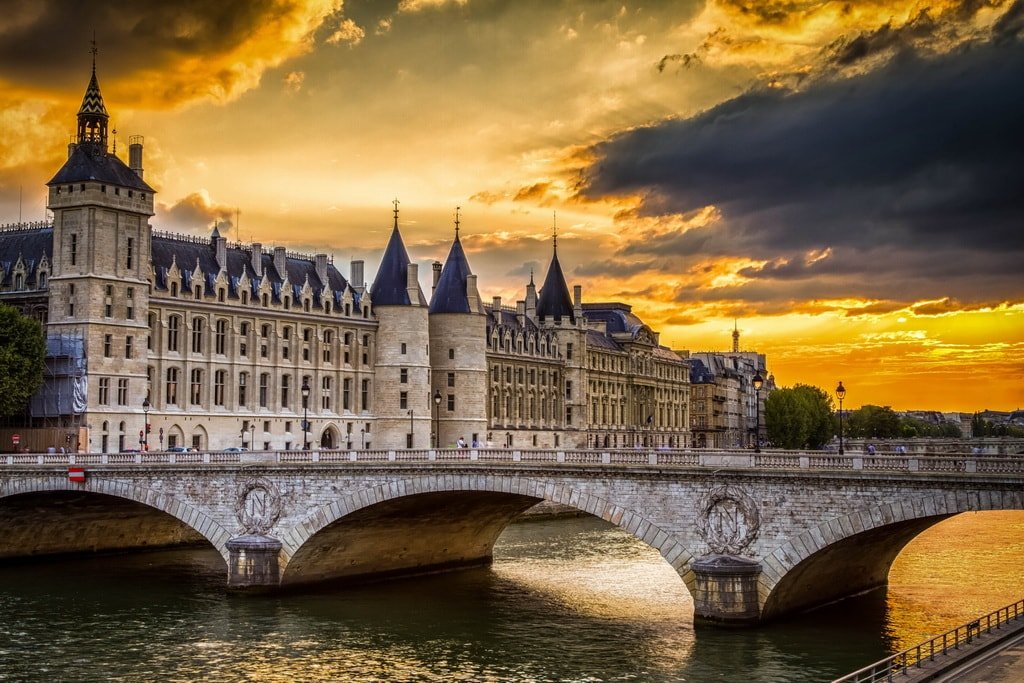 The Conciergerie Palace is one of the oldest sights in Paris, built in the sixth century under King Claudwig I. Until the 14th century, the most famous monarchs of France lived here, but later it was turned into a prison for prisoners, including Marie-Anutanette and Robespierre. The palace has a long list of iconic places: the Chapel of Saint-Chapelle in the Gothic style, the Salle des Ratiers, where the king’s guards dined, the kitchen wing, the guardroom, where the council met and orders for executions were given.

Rue de Paris, the place where lepers waited for their sentence; Marie Antoinette’s Chapel and solitary confinement cell; the Corridor of Prisoners and the four famous towers, each with its own separate story. Tickets to the museum are inexpensive, but you will need a lot of time to see it. 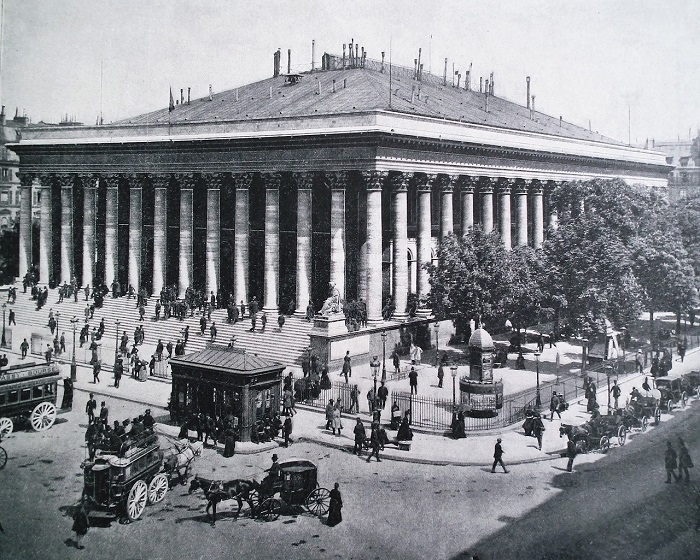 By order of Emperor Napoleon in 1826 a special building was built for transactions between merchants.

2. Waterfall in the Bois de Boulogne 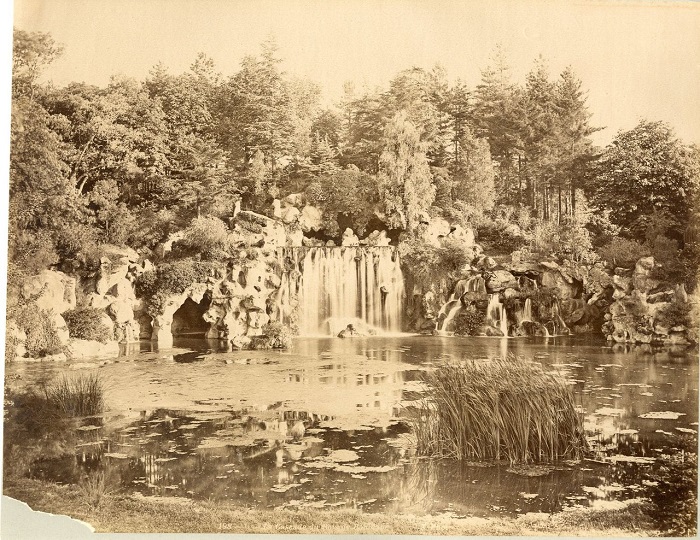 In the 18th century, the Bois de Boulogne was a veritable royal forest: it became a favorite destination for walks of the nobility, where meetings were arranged and intrigues were woven in the shade of the trees.

The tower of Saint-Jacques. 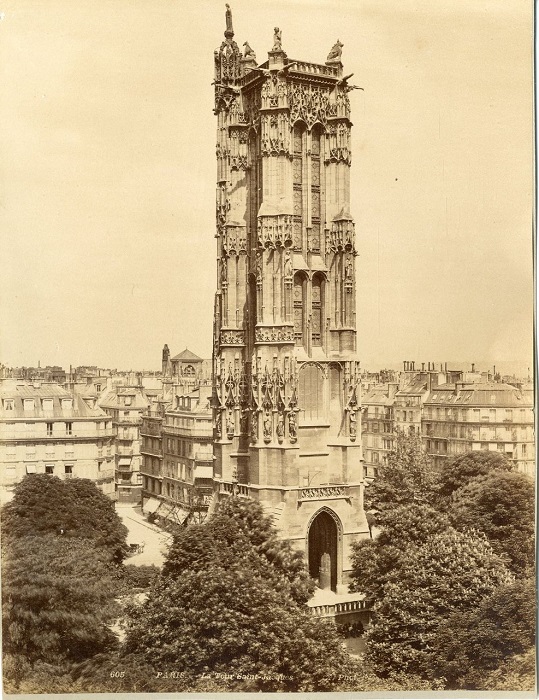 A bell tower in the “Flame Gothic” style.

4. The Palace of Saint Cloux 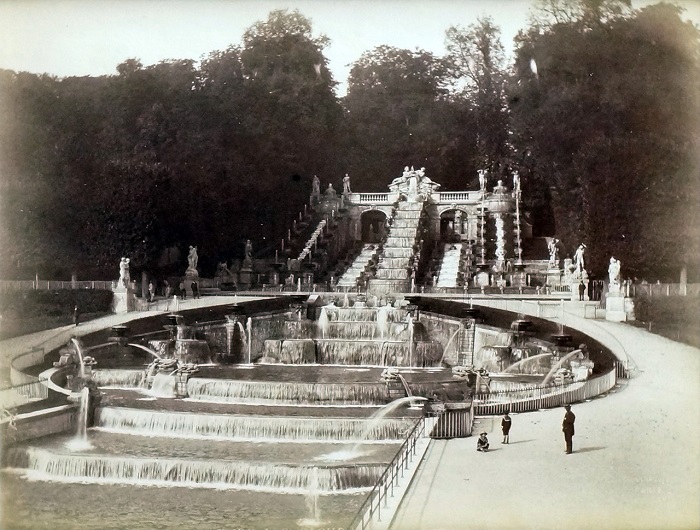 A waterfall in the park. 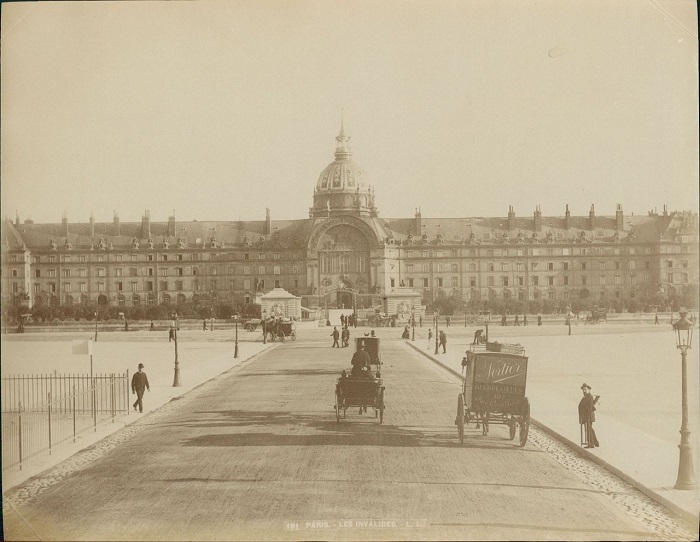 King Louis XIV, in order to ease the post-war existence of disabled soldiers, ordered that the Invalides’ House be built in Paris, where honored veterans and disabled war veterans could live.

3. The girl with the carriage. 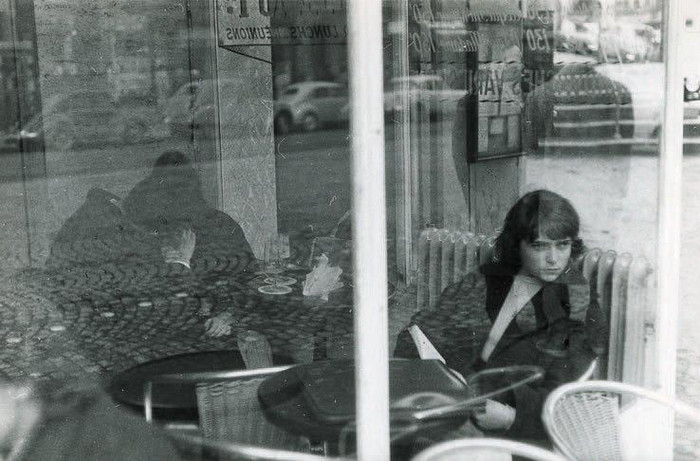 A cafe on Boulevard Saint-Germain, 1969.

Izraelis Bidermanas was born in 1911 to a Jewish family in Mariampol, Lithuania. His schoolmates called him a dreamer. His father wanted Isis to work as a carpenter, but the boy was passionate about painting. At 13, he dropped out of school and began studying photography. Later he left his hometown to travel and take photographs. 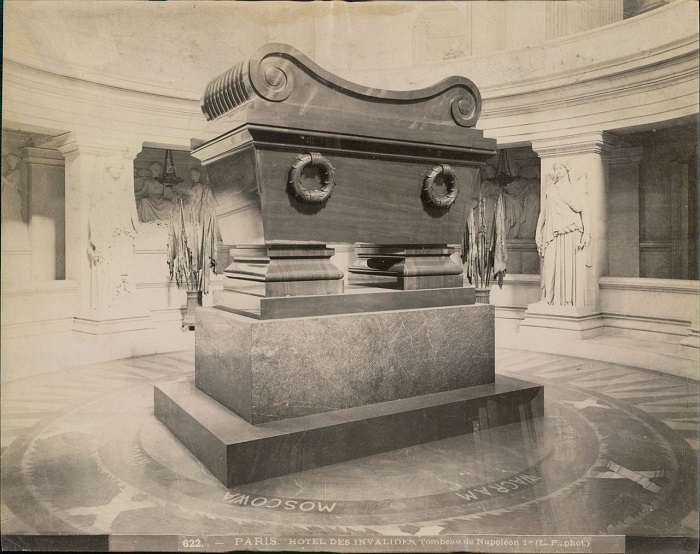 The Invalides House-the last resting place of the French emperor. 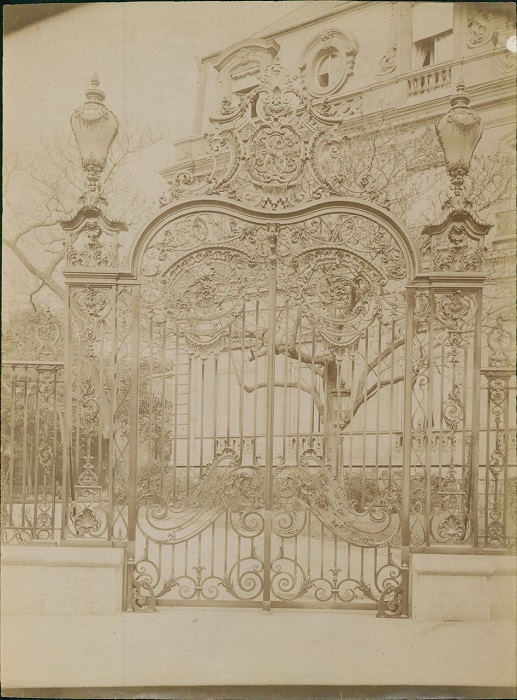 Lattice of the gates of the main entrance. 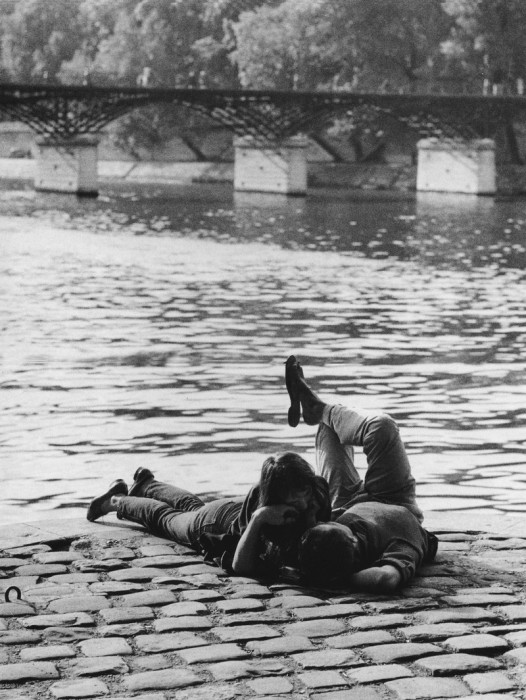 Security measures did not save the photographer, and he was captured by the Nazis. He was freed by members of the French resistance, the Maquis. Bidermanas joined the underground fighters and dedicated a series of portraits to them that became prominent in his oeuvre. 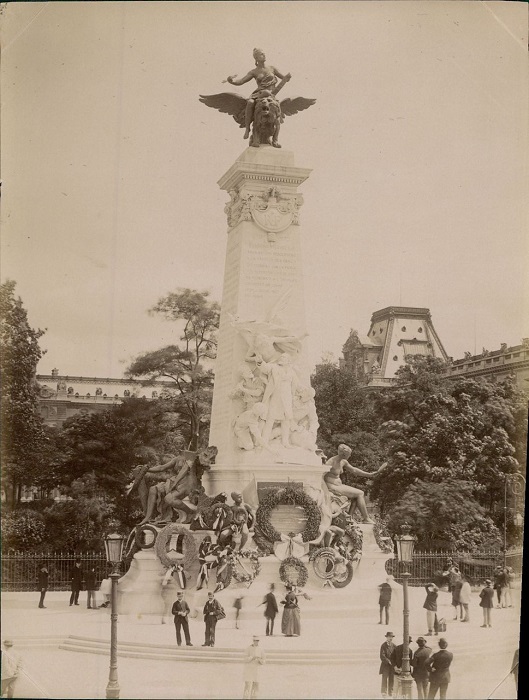 Dedicated to the eminent Parisian lawyer Léon Gambetta, who later, in the government of the Third Republic, became Minister of the Interior of France. 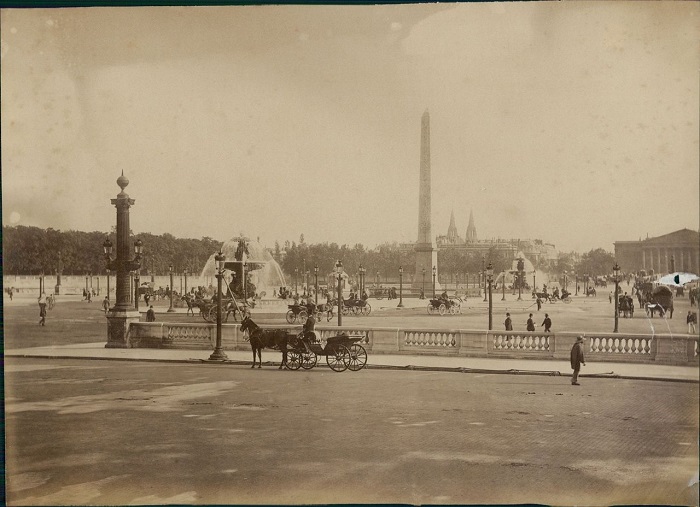 A majestic obelisk of pink granite. 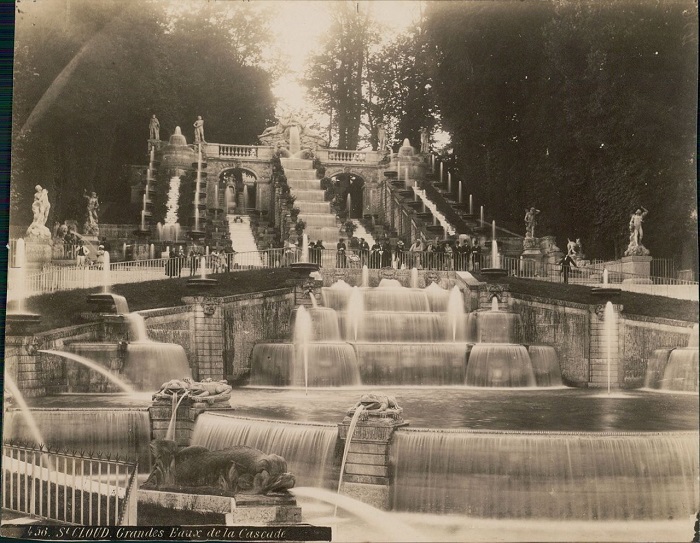 A beautiful park and cascade of fountains . 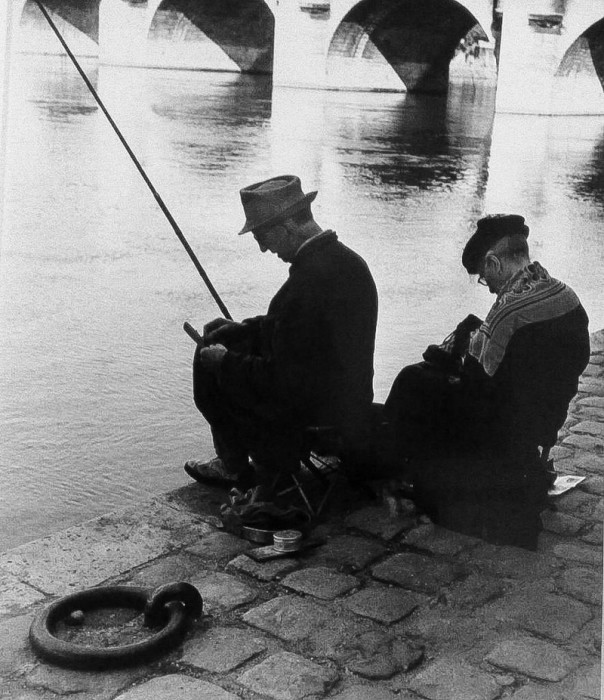 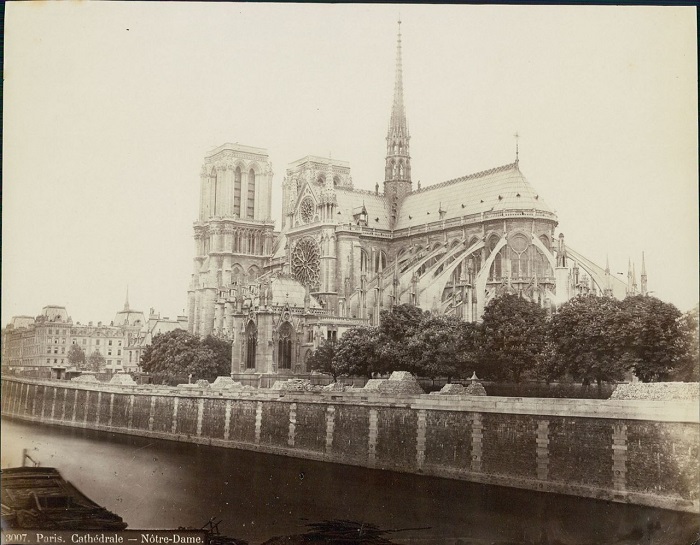 General view from the Seine River. 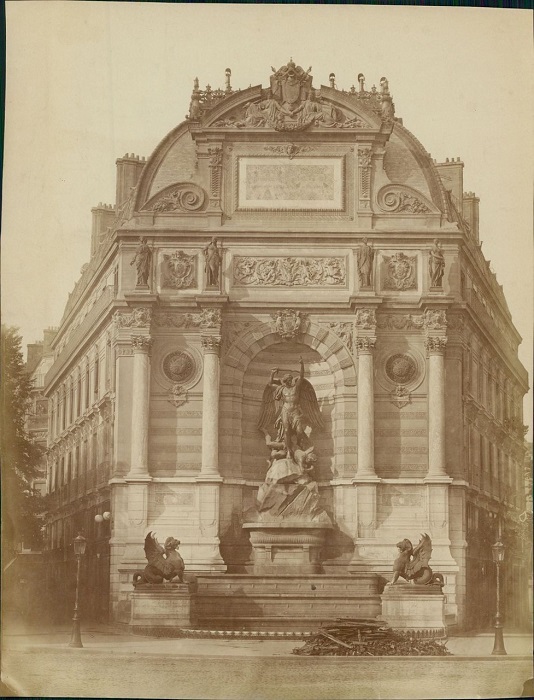 28. Fountain of the Medicis 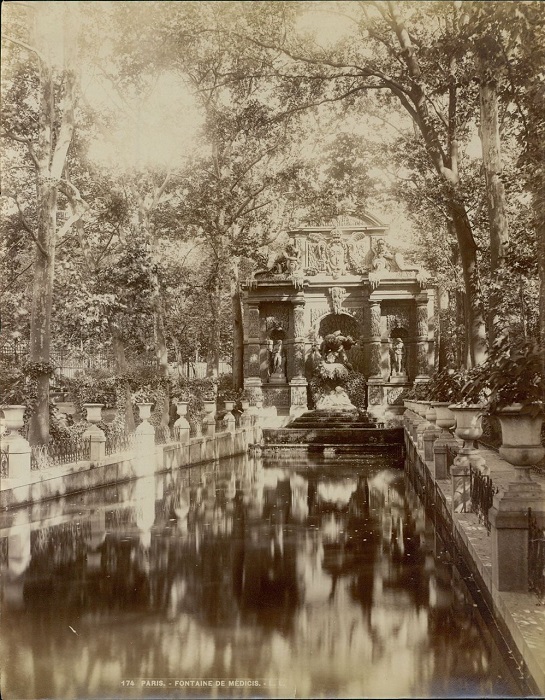 One of the most romantic fountains in the Luxembourg Garden. The Church of Saint-Sulpice.

Work on the Church of Saint-Sulpice began back in 1646, and it took six architects a total of 150 years to complete it. It is known for its striking Italian façade with two rows of columns, its neoclassical counter-Reformation decor, Eugène Delacroix’s frescoes and, of course, Dan Brown’s masterpiece, The Da Vinci Code.