Barcelona is a city with so many interesting things that it’s impossible to cover them all in one trip. Here are the 10 must-see places to visit in order to experience the Barcelona with all its rebellious spirit and unforgettable atmosphere. Not only will we talk about the sights, but also about the cafes.

Before your trip, download our app so you can have an offline guide for your city.

The Sagrada Familia or Sagrada Familia is an iconic landmark of Barcelona. The cathedral owes its memorable appearance to its creator, architect Antonio Gaudi. He dedicated his last years to the construction of this majestic temple, but did not have time to complete it. Despite the fact that there are still construction works underway, the temple is open to the public. This place is quite popular with tourists, without pre-booked tickets, be prepared for serious queues.

You can order tickets in advance and get in without queuing.

La Rambla is Barcelona’s main promenade and a walk along it is a special ritual. The uniqueness of the boulevard is intertwined with the shouts of local traders, mimes, music and the echoes of street performances. La Rambla connects the Gothic Quarter and the more modern part of the city.

While strolling along the boulevard, be sure to sip a glass of water from the Capaletes fountain. Local lore says it will make it possible to return to Barcelona again. To get to the boulevard, take the Liceu, Catalunya or Drassanes metro stations.

If you walk around La Rambla don’t miss the atmospheric Boqueria market, one of the most inviting food markets in the city. In this market, which has been open for centuries, you can find the highest quality products in town. They are bought here as well as ordinary citizens, and chefs of famous restaurants. A variety of fruits and vegetables, cheeses, Jamón, delicacies, and the freshest seafood – this is not a complete list of the things that are sold at the counters of the Boquería every day.

This place in Barcelona is a must-visit not only for the food, but also for the atmosphere. Friendliness, openness and friendliness rule there, every product will be given a try and along the way you will get interesting information about it.

4. the Aquarium of Barcelona

L’Aquarium de Barcelona is an absolutely amazing place! The largest aquarium in Europe, inhabited by sea creatures, some of which are gigantic. It consists of 35 themed aquariums that are home to more than 400 species of sea creatures. A special pride of L’Aquarium de Barcelona is the unique oceanarium, designed in the form of an underwater tunnel. While wandering through it visitors feel as if they are at the bottom of the sea, with sharks, rays and other fish swimming majestically above their heads. This is a great place that is a must-visit for children.

The Barcelona Aquarium is open daily from 9:30 to 21:00, closing time is moved to 23:00 in the summer months. It is located in the area of the Old Port (Port Vell), the nearest metro stations are Drassanes and Barceloneta.

Picasso museum is one of the main museums of Barcelona and one of the three world’s largest museums dedicated to the work of the great artist. Its permanent exhibition consists of about 3,800 paintings, tracing the formation of Picasso as a painter. Every year it is visited by more than 1 million people.

The museum is located at Montcada 15-23 and occupies several old mansions, located next to each other. The nearest metro stations are Arc de Triofim, Liceu and Jaume I.

Picasso Museum is open from 9:00 to 19:00 any day of the week except Monday. You can see the permanent exhibition for 11 €, temporary exhibitions for 6,5 €. But on some days you can get in the museum for free – read here. There are sometimes queues at the museum, you can avoid them by booking in advance.

The Spanish Village (Poble Espanyo) is a purpose-built village that brings together architectural traditions from different regions of Spain. The village consists of 116 buildings, some of which are made in true size, some in scale. In the houses are open craft shops, souvenir and grocery stores. In the local workshops you can buy the most unusual and author’s souvenirs, such you will not find in the usual shops. While visiting the village you can have a delicious meal in one of the local pubs or restaurants, as well as see a flamenco show.

The Spanish Village can be found in Montjuïc Park at Av. Francesc Ferrer i Guàrdia, 13. The closest metro station is Espanya, from which you must walk 15 minutes. The Spanish Village is open from 9:00 am until late at night. Full ticket costs 14€, children 7€, one hour flamenco show from 41€.

Barceloneta is the most popular beach of the city, so it is always crowded, bustling with life and fun. It stretches a kilometer along the coast from the Carrer Almirall Cervera to the Olympic Port. Barceloneta is famous for its infrastructure, which is an integral part of a comfortable beach holiday.

You can get here on foot or by metro, getting off at the stations Barceloneta or Ciutadella. You can rent a chair for 6 €, an umbrella for 5 €. 8.

Park Guell is another place that must be visited in Barcelona to fully appreciate the extraordinary architectural style of Gaudi. The wealthy city dwellers once didn’t appreciate it, but later it was added to the UNESCO World Heritage List and today thousands of visitors come here. During a leisurely stroll through the park the eyes never fail to delight in the bright colors, the unusual lines of the houses and the colorful facades.

In the area of the Old Port on an artificial island is one of the best places for leisure and shopping in the city – the shopping center Maremagnum. Under one roof there are boutiques of famous brands, gastronomic terrace, observation decks, entertainment area, beauty salons, cinemas and a nightclub. When shopping, don’t forget to collect receipts so you can return the taxfree.

If you want to shop in Catalonia to the maximum and you are not afraid of the distance from the city, go to the outlet village.

Els Quetro Gats is a legendary establishment that you simply must visit in Barcelona. Its regulars were Picasso, Gaudi, Enrique Granados, Lewis Milet and other famous people of Spain. Even today the restaurant manages to keep its bohemian atmosphere, which makes it one of the iconic places in the city. If you happen to visit it, try the local hits: tuna with vegetables, oxtail with celery puree and Catalan dessert with chocolate.

The restaurant is located in the Gothic Quarter at Carrer de Montsió, 3, the closest metro stations are Catalunya and Jaume I. The restaurant is open from 10:00 to 01:00, the average dinner costs 50-100 €.

It is necessary to have 5-7 days and a budget of about 150 € per person in order to see all these sights without fuss. You can save a little money on entrance tickets by booking online in advance. Have a nice vacation!

Top 10 attractions in Barcelona. What to see and where to go in the city

For those who are planning to visit Barcelona for the first time, we present you a list of places you must see first of all in this beautiful city.

So, what to see in Barcelona?

One of the many masterpieces of not unknown Barcelona creator Antoni Gaudi is Park Guell. It is a pretty extensive green area with Mediterranean vegetation. The main architectural core of the park is a small limited area with Gaudi’s unusual buildings. There is a fee to enter this area of the park. It is worth visiting not only for the unique works of the local architect, but also for the marvelous view of Barcelona from here. 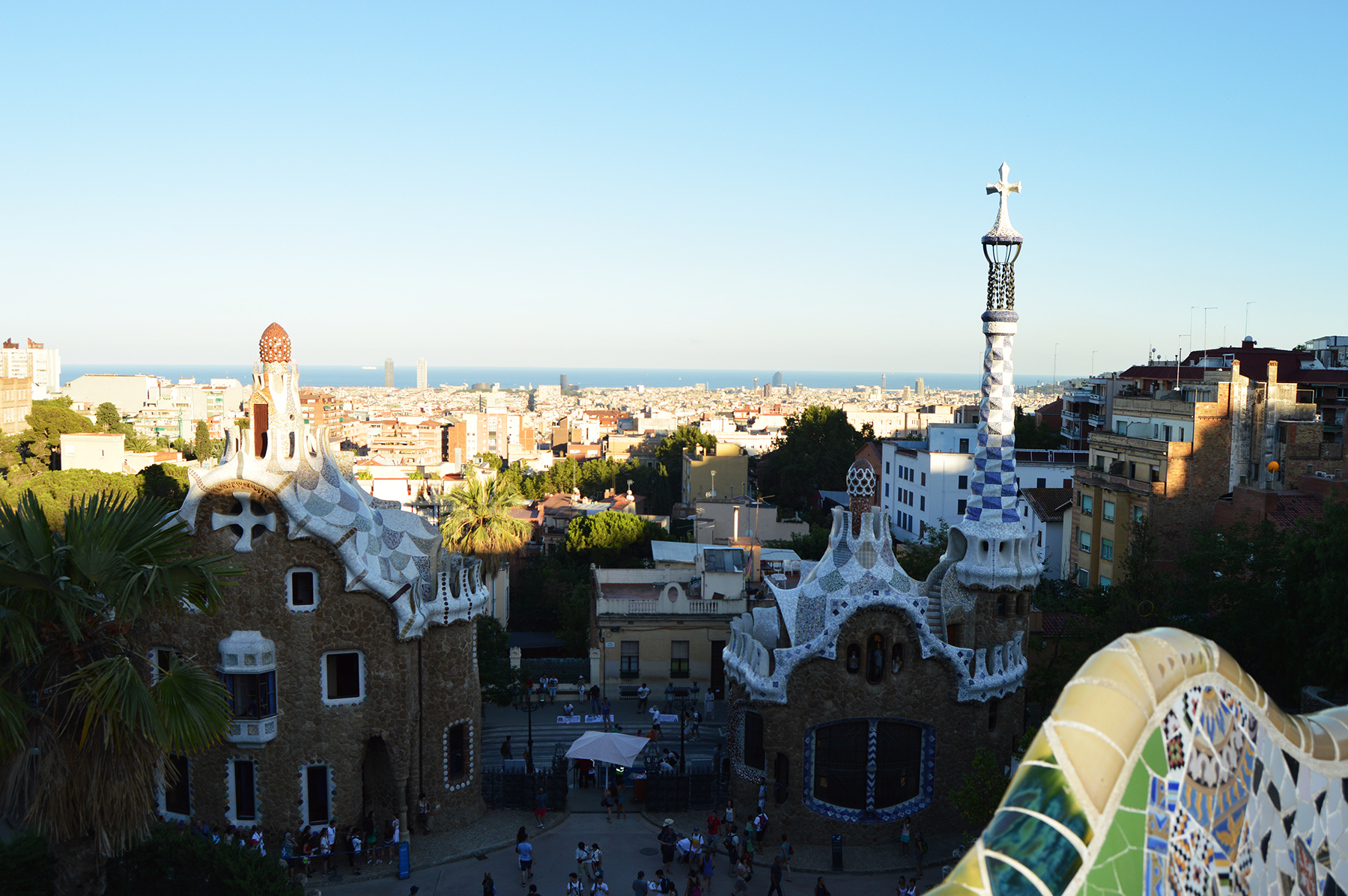 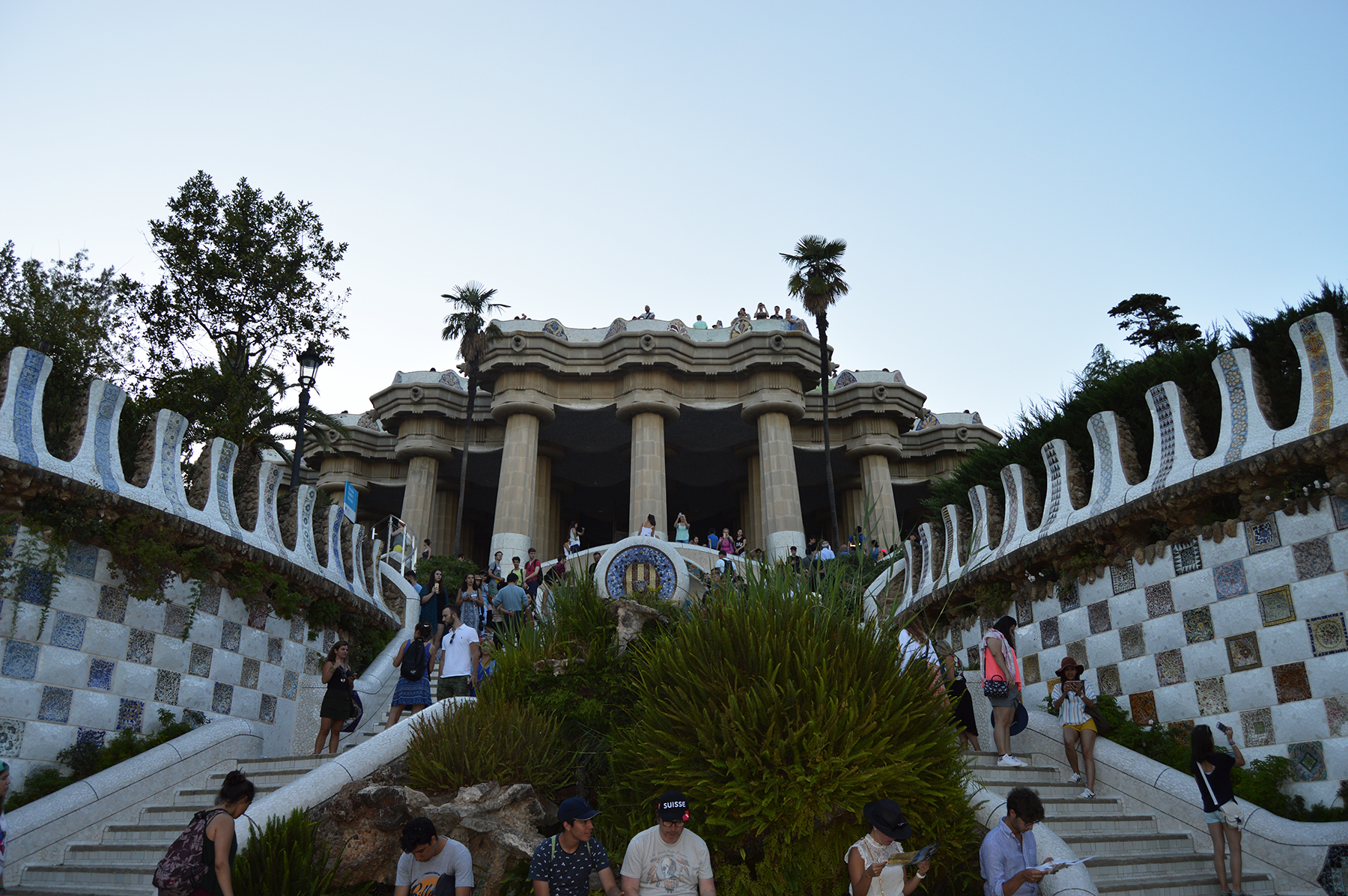 The most outstanding creation of the famous Antoni Gaudi and one of the most famous long-buildings in the world is the Sagrada Familia. The construction of the temple has been going on since 1882 and is still going on. The Spanish government predicts the end of construction only by 2026. The temple is made in architectural styles of Neo-Gothic and Art Nouveau. Sagrada Familia is one of the most beautiful, unusual and unlike other Catholic churches in the world and is the trademark of Barcelona. 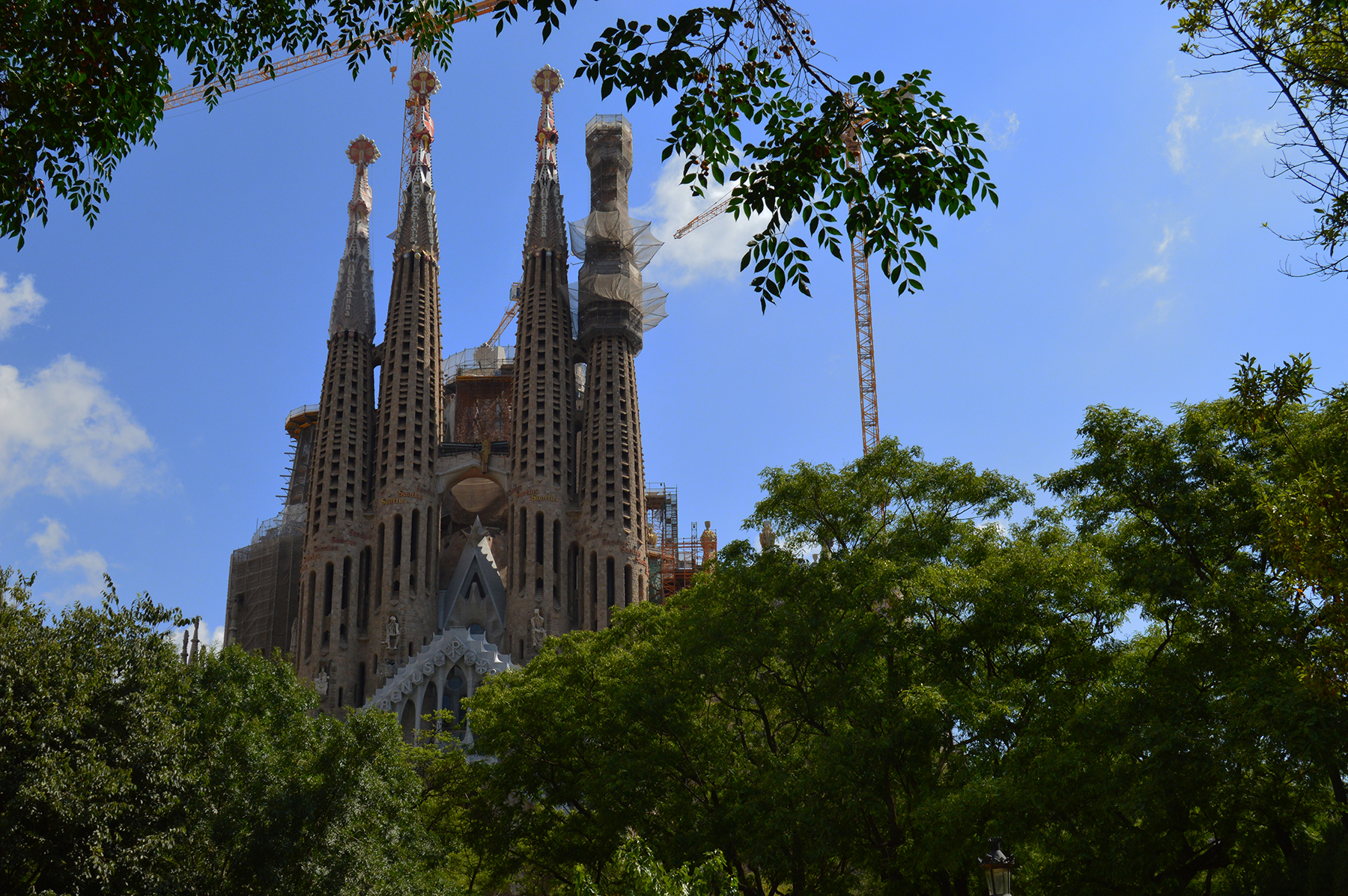 One of the most colourful districts of Barcelona with its 15th century buildings, narrow crooked streets and restaurants with traditional Mediterranean cuisine. The neighborhood is considered by many to be the “Heart of Barcelona”. 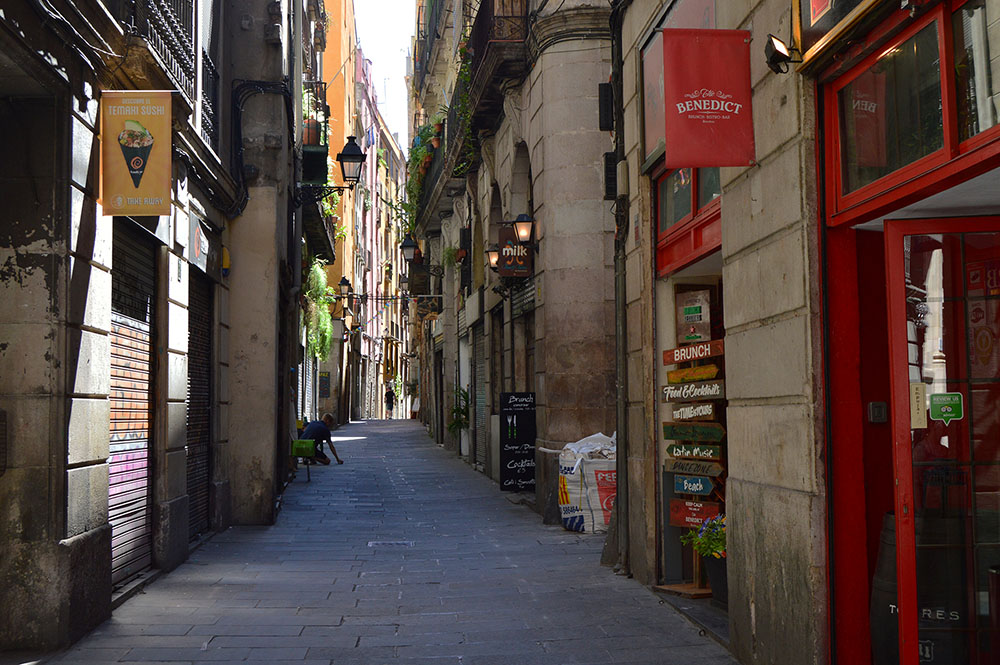 The oldest part of the harbor of Barcelona, which today is probably one of the most picturesque areas of the city. The area of Port Vell has several big and interesting landmarks: the monument to Christopher Columbus, the Rambla del Mar, a curved bridge that is a modern extension of the famous La Rambla, the Maremagnum Shopping Centre and the Aquarium of Barcelona. The Old Port is a great place to walk and explore Barcelona at any time of day. 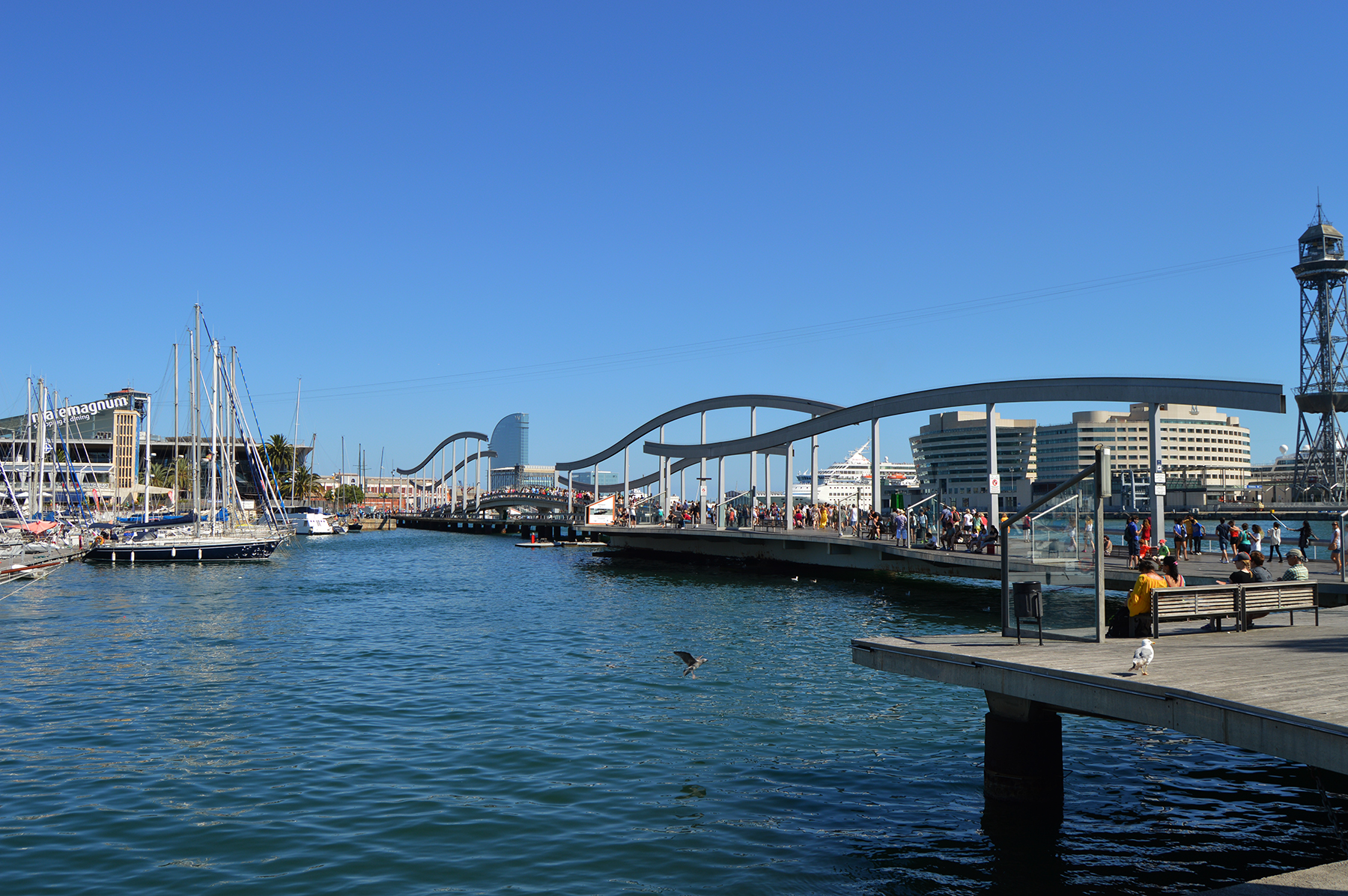 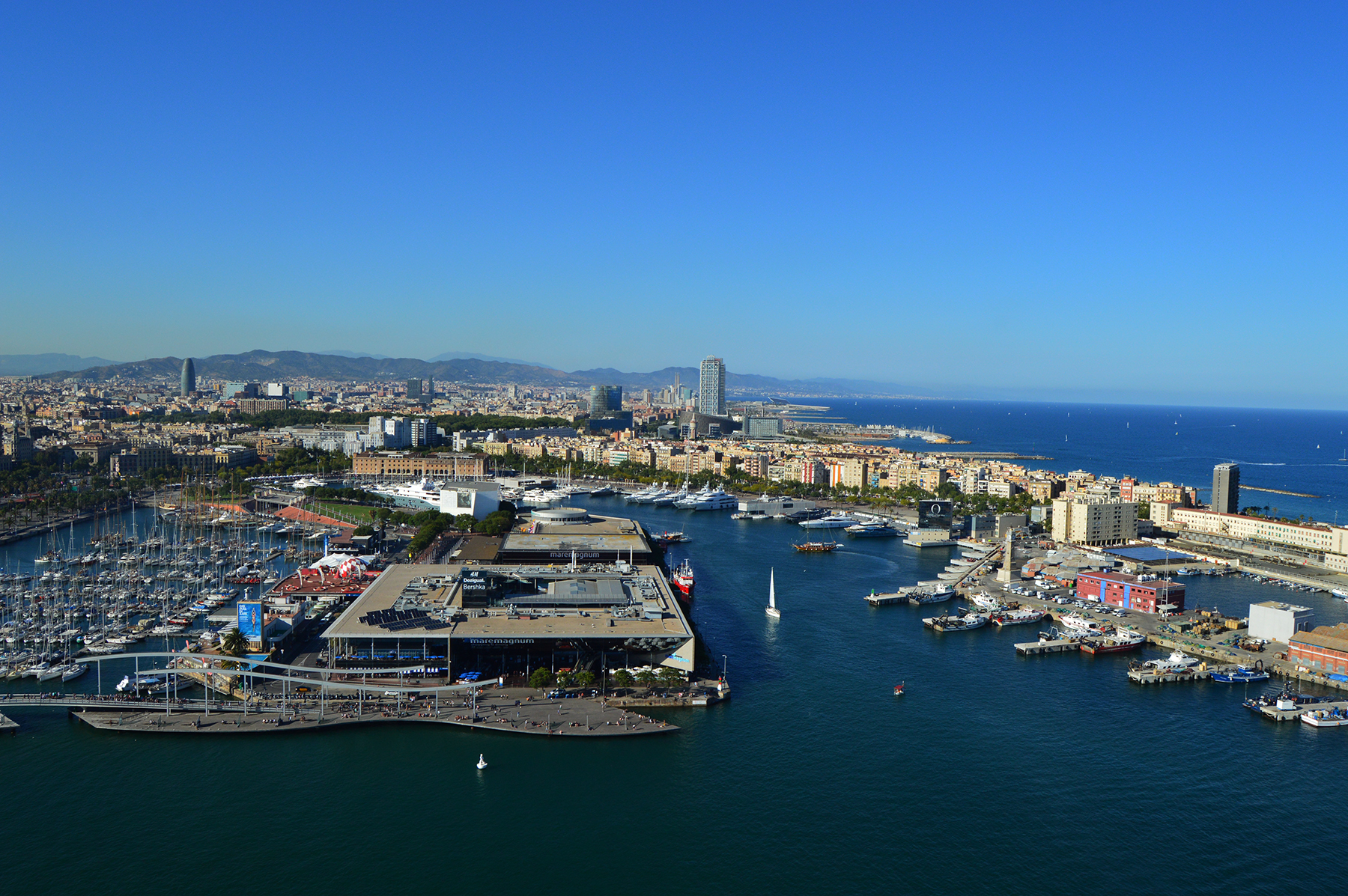 5. The National Palace and the Magic Fountain of Montjuïc

The National Palace is a huge prominent architectural structure built in 1929 and is located in the northern part of the Montjuïc Mountain. Today, the palace houses the National Museum of the Arts of Catalonia, with a large collection of works of art from various eras.

At the foot of the palace is the most famous fountain in Barcelona, the Magic Fountain of Montjuïc, which in the evenings shows a magnificent light show accompanied by music. The water extravaganza is formed by 3,620 jets. The cascading fountains of the National Palace building harmoniously complement the show. Together, the Magic Fountain and the National Palace form an excellent, must-see site in Barcelona. 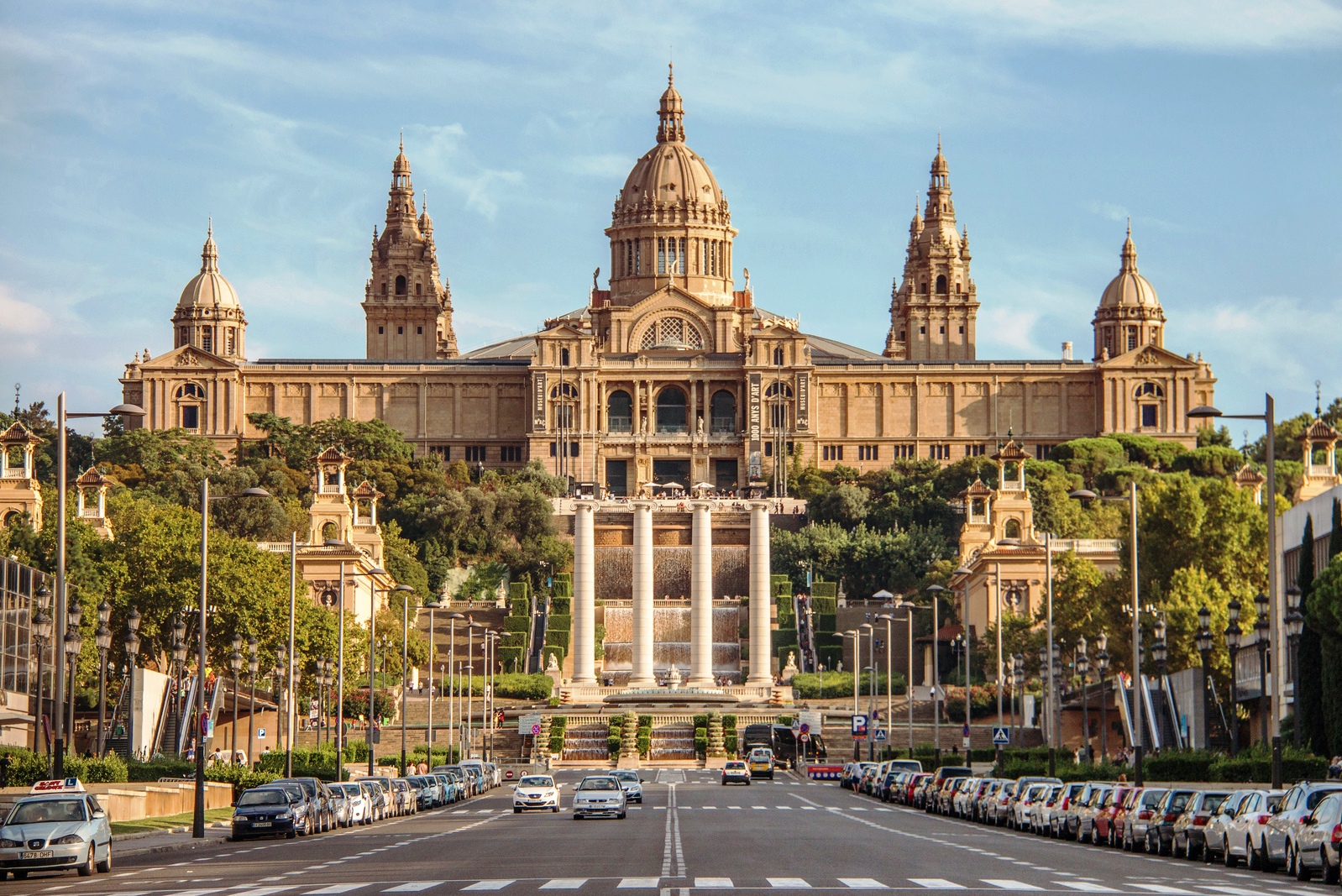 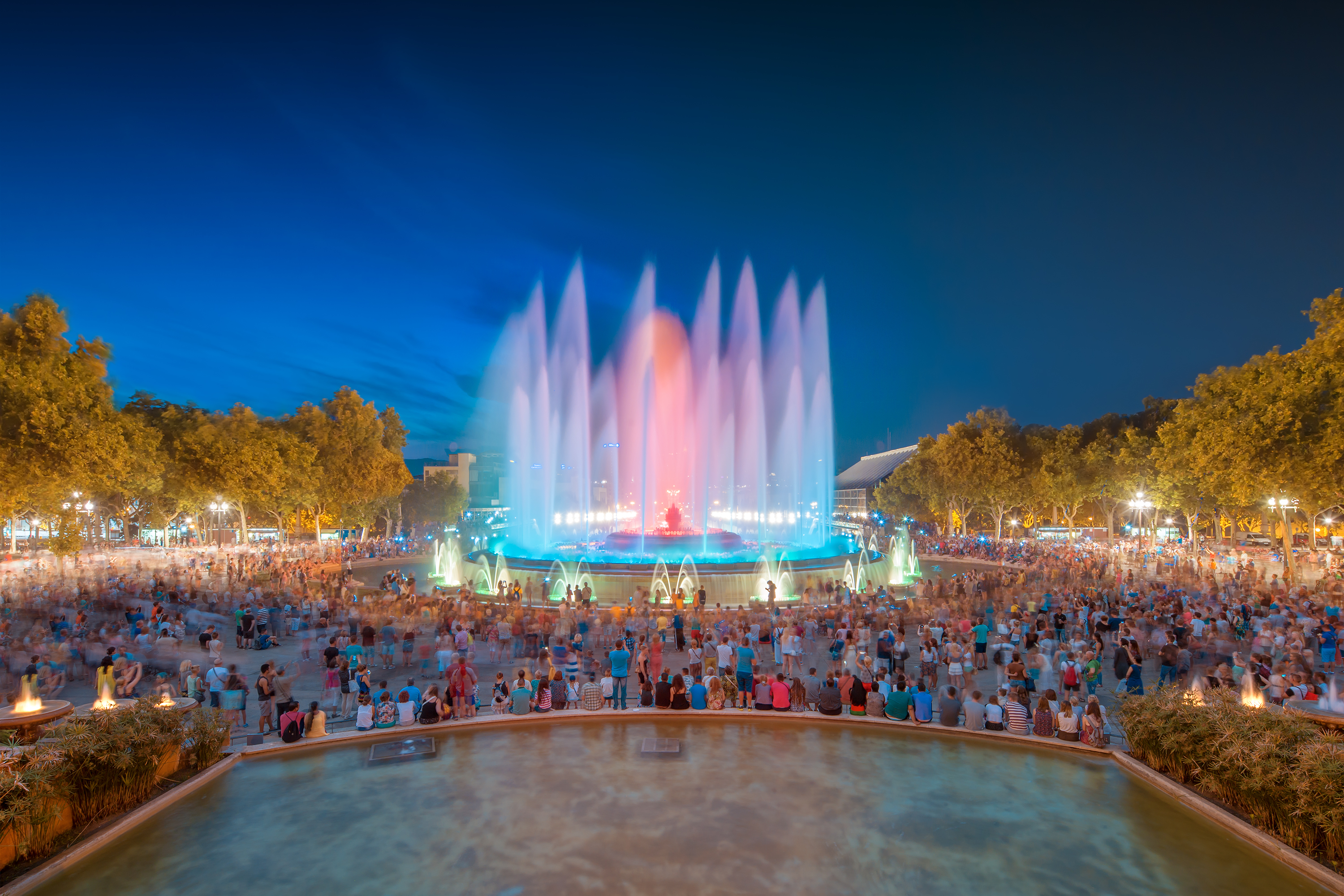 It’s easy to admire the splendor of Barcelona and the beauty of the city from different angles – there are plenty of great viewpoints for that. But there is a more interesting option: to fly over the city at a height of almost 100 meters. The cable car, which begins in the Old Port of Barcelona and runs to Montjuïc, allows you to enjoy a bird’s-eye view of the city’s magnificent harbor, its endless beaches, etc. Definitely an opportunity not to be missed. 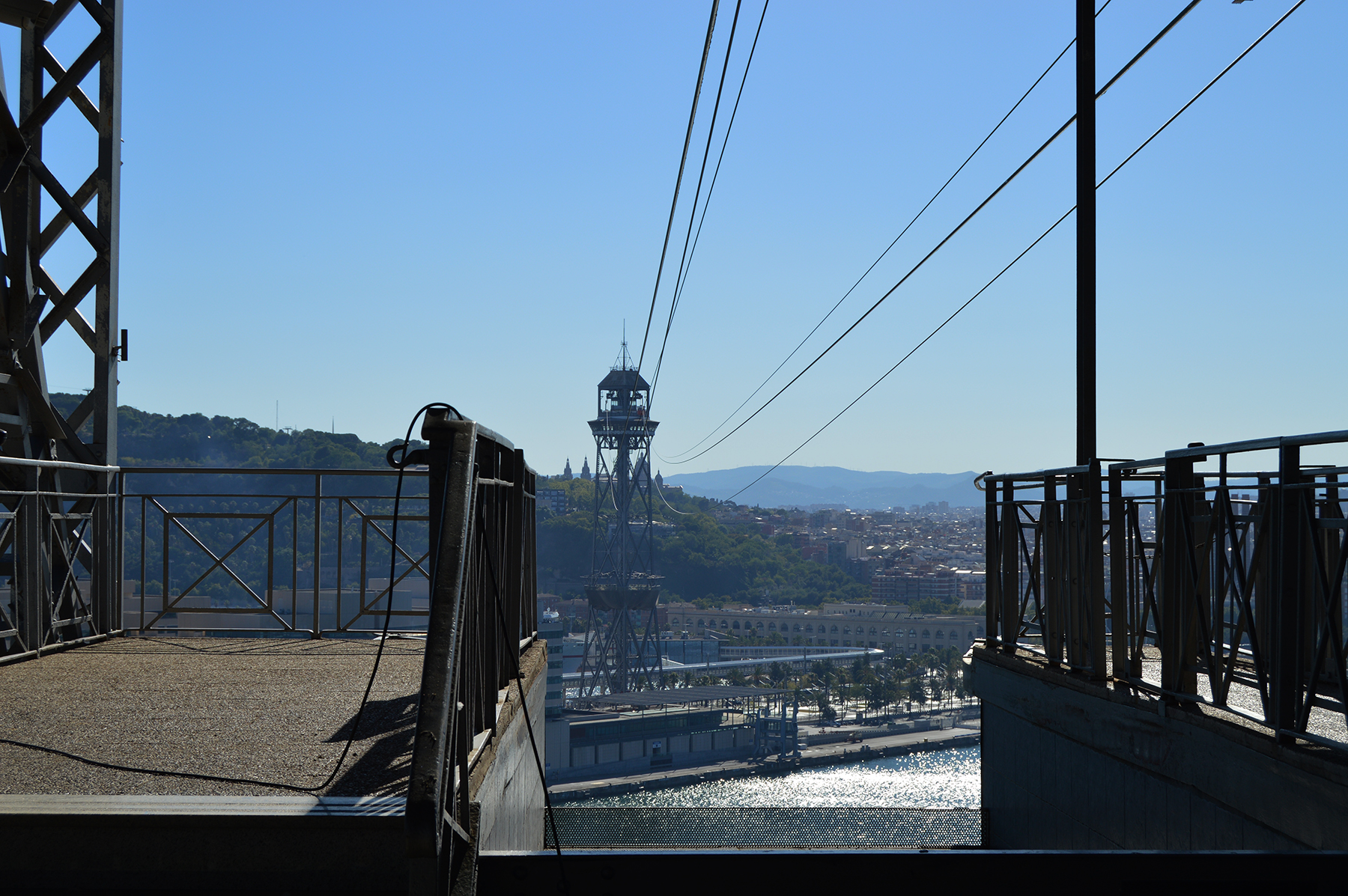 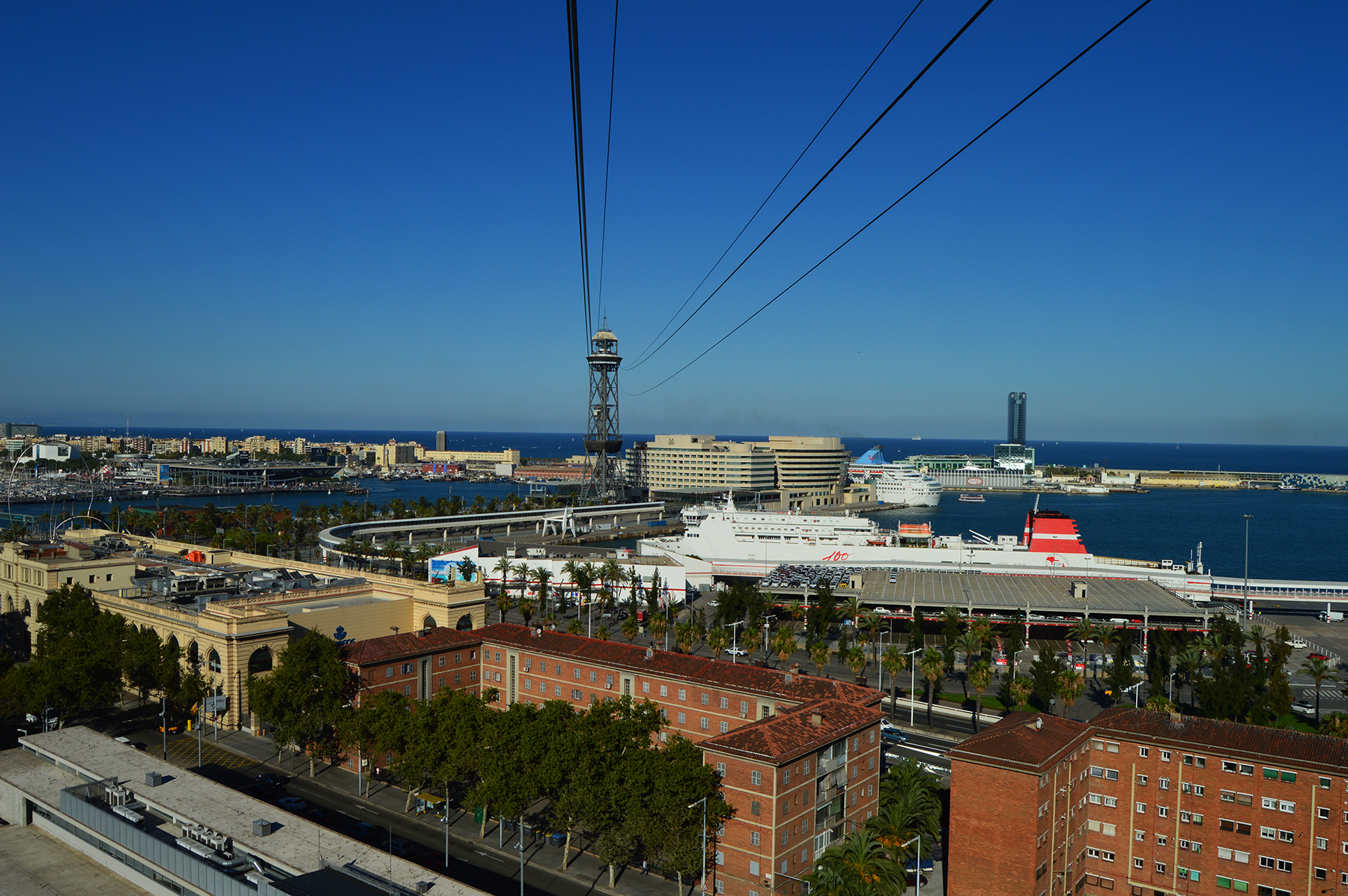 The Rambles, the landmark of the city, is more than 1 kilometer long. It stretches from Plaça Catalunya to the Old Port and actually divides the old city of Barcelona into two parts. It is a very busy pedestrian street with lots of things to do and see: souvenir shops, restaurants, boutiques, street performers, and other attractions. 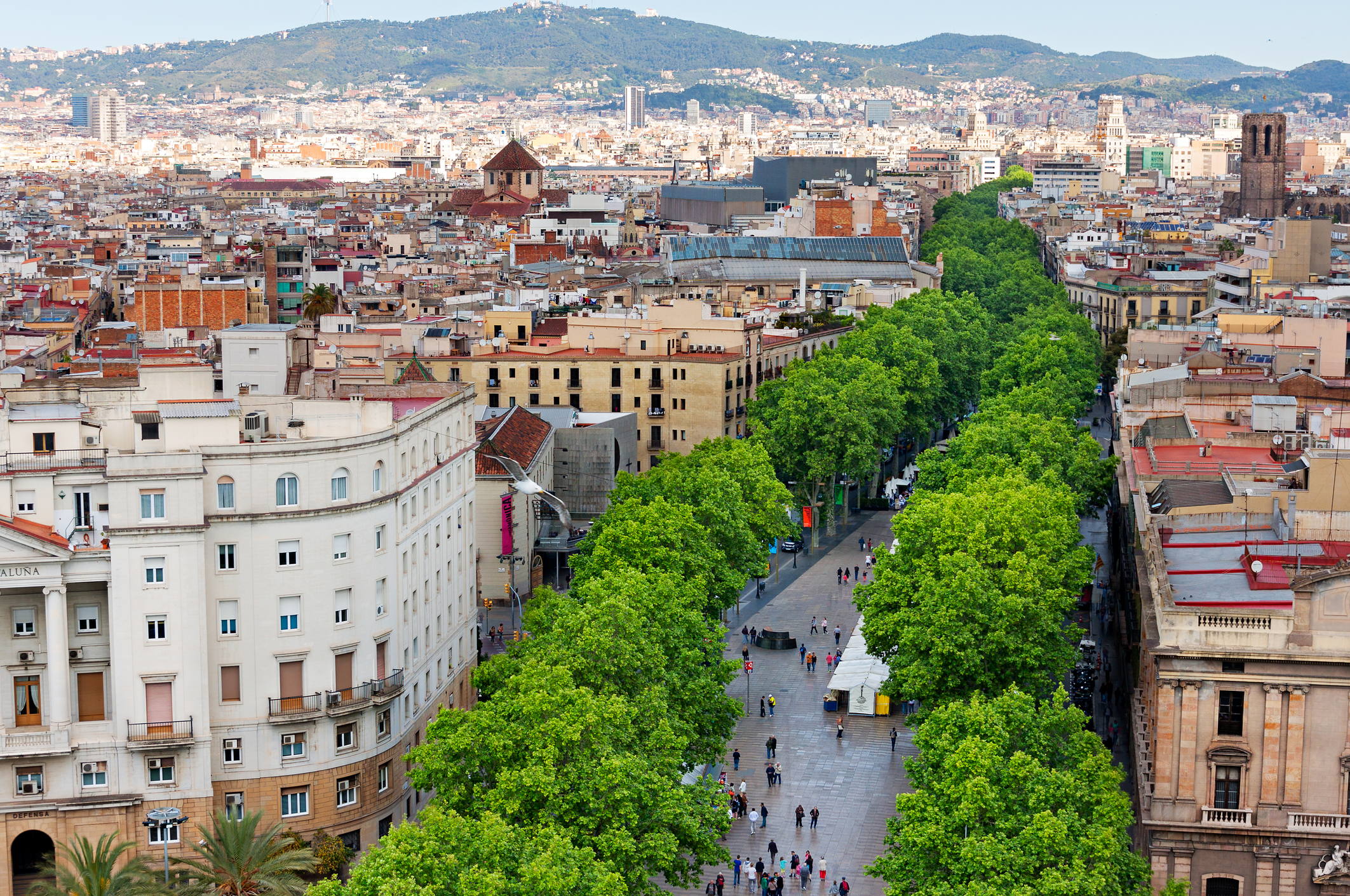 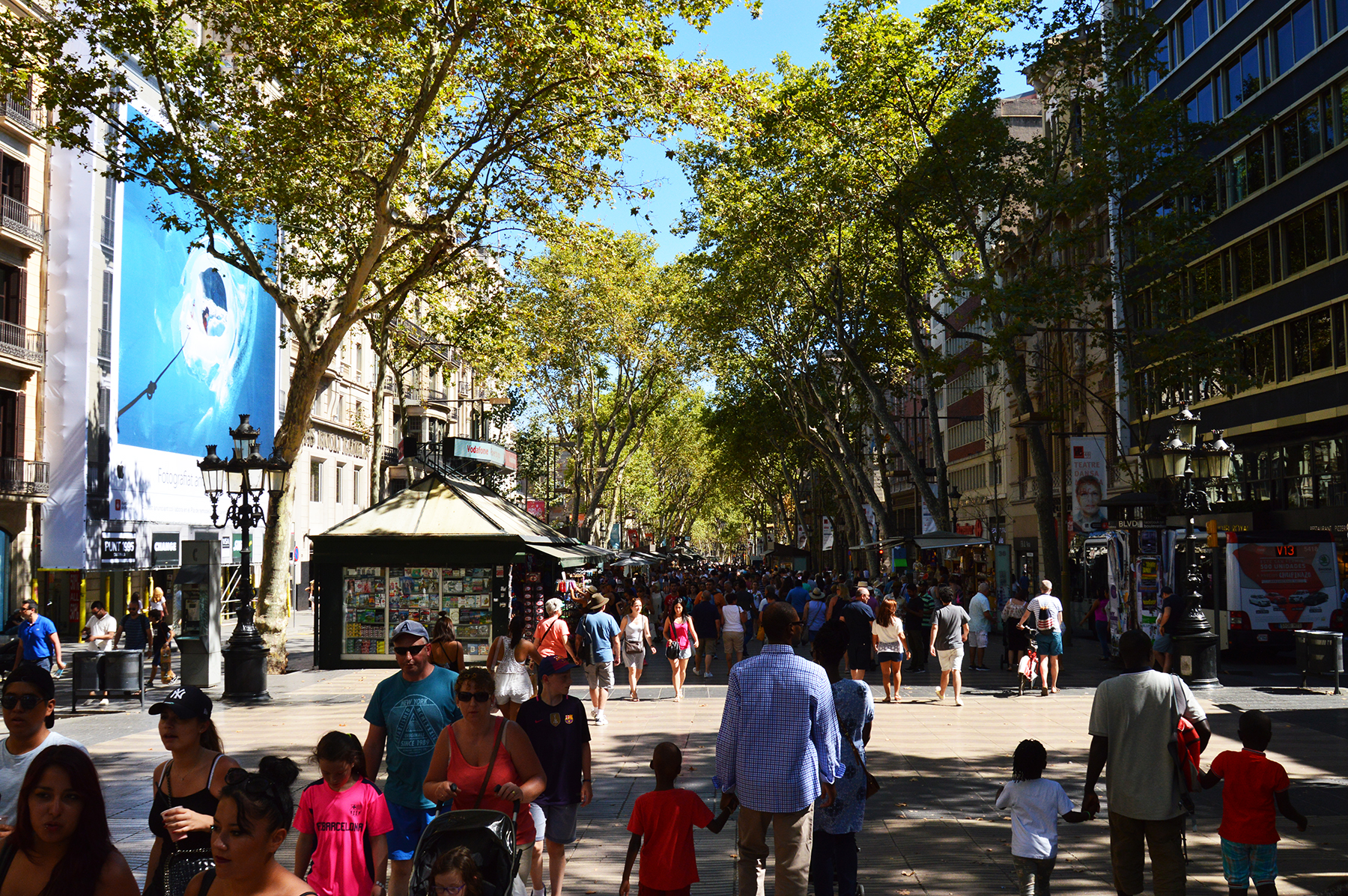 Not only soccer fans, but also ordinary tourists should probably go and see the largest stadium in Europe, walk around its stands and visit the museum of one of the greatest soccer clubs in the world, because soccer is an integral part of life in the city and the whole Catalan culture. 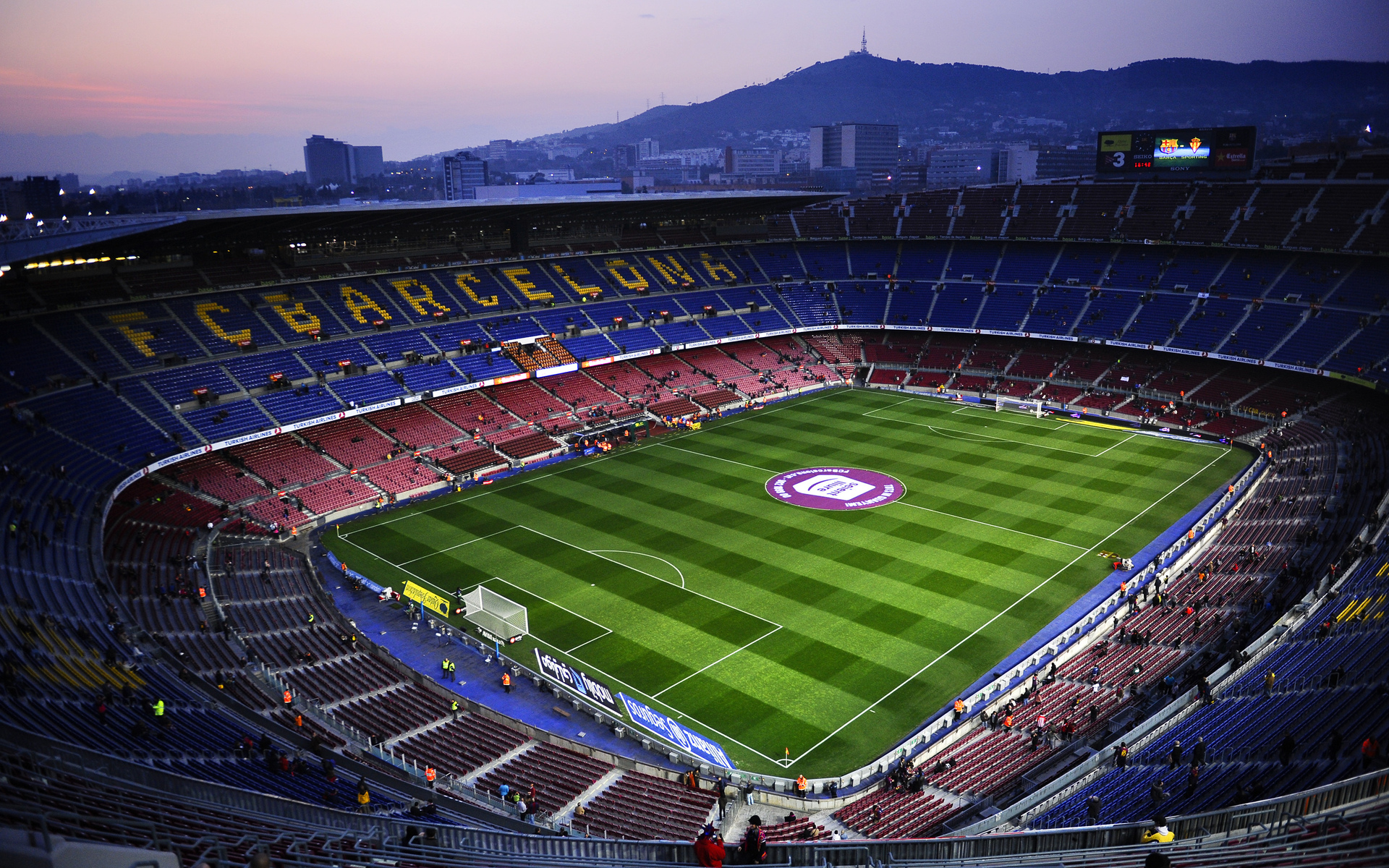 A big square in Barcelona occupying about 50.000 m2 and being the most important transport hub, a crossroads of many tourist routes in the city and simply a beautiful place. 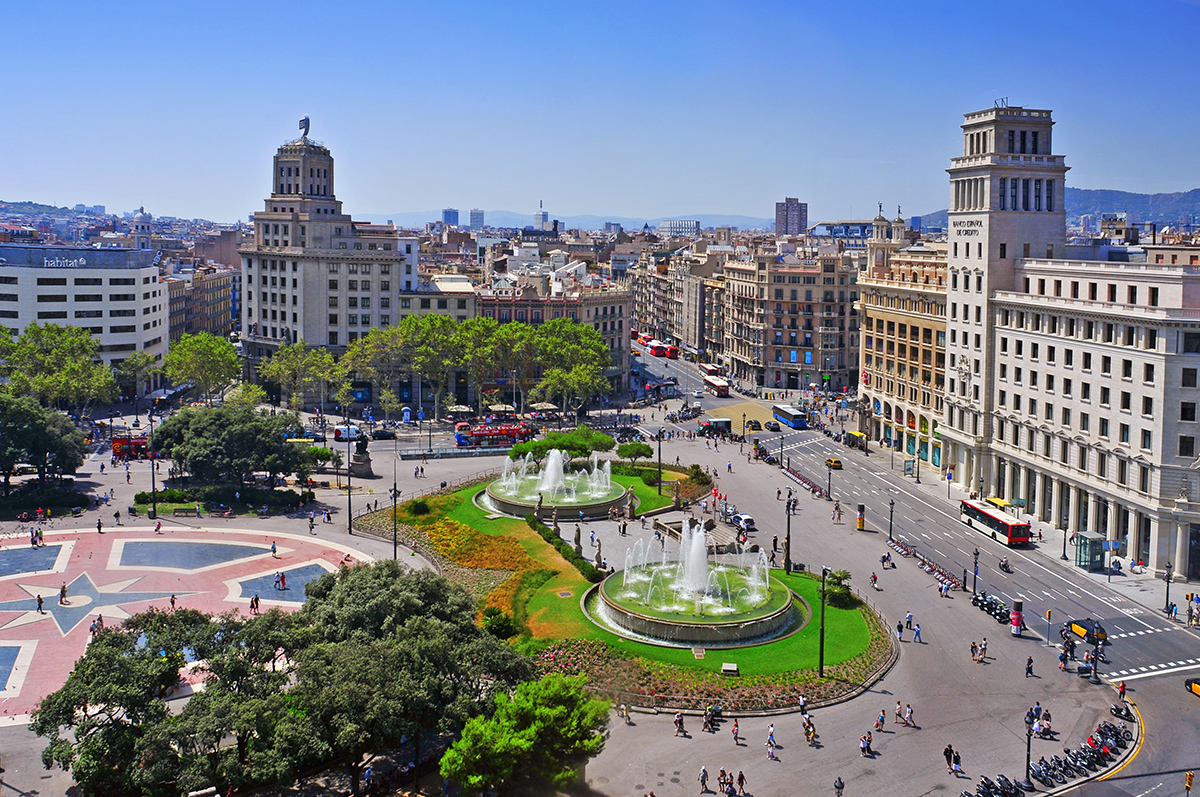 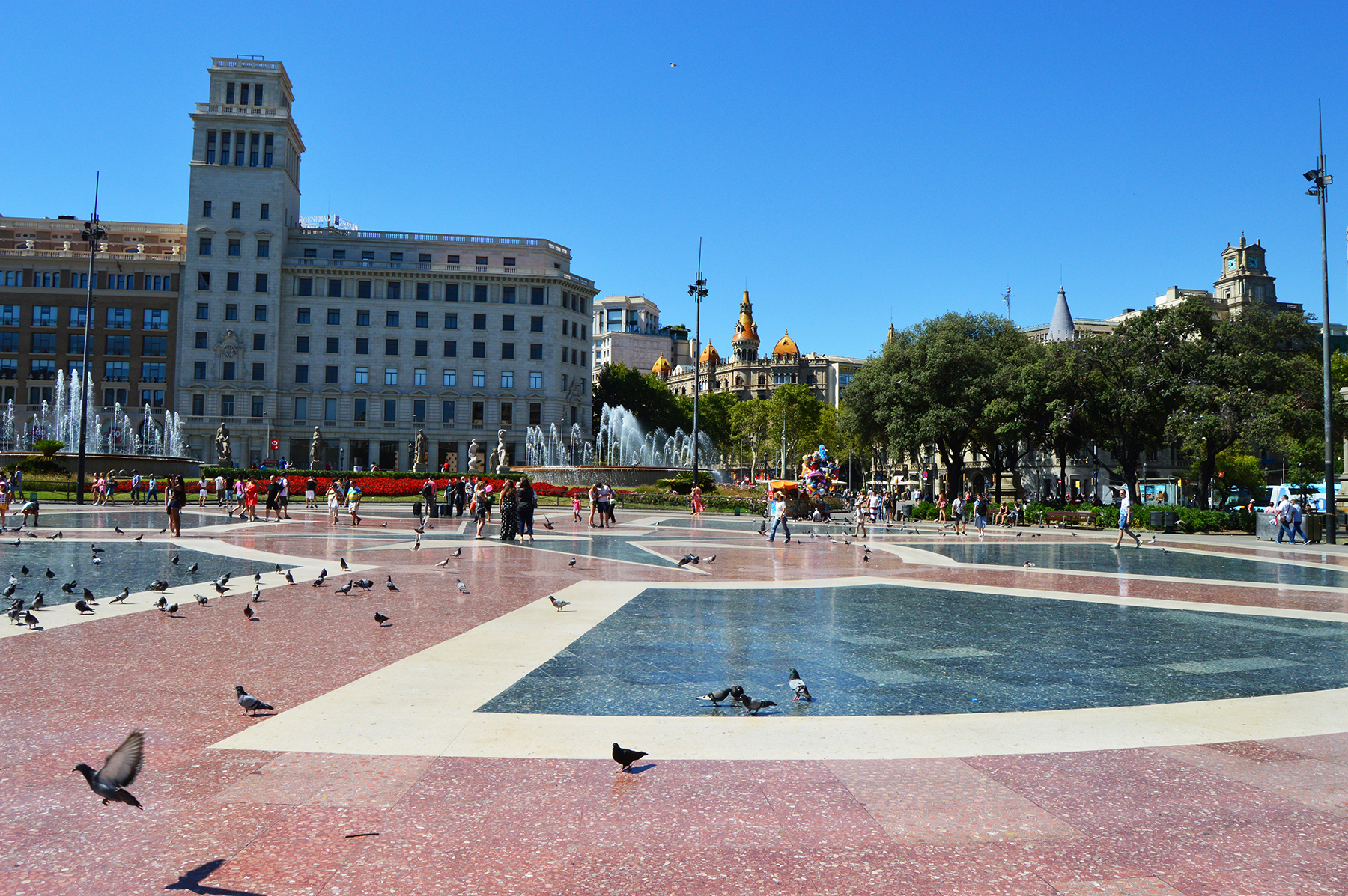 Of course, you can’t leave Barcelona without visiting one of its beaches. The most popular of them is Barceloneta, which stretches for 1100 meters within the same picturesque old quarter of the city, which used to be a fishing village. The Barceloneta quarter has quite interesting architecture, and the beach promenade is dotted with numerous traditional seafood restaurants. 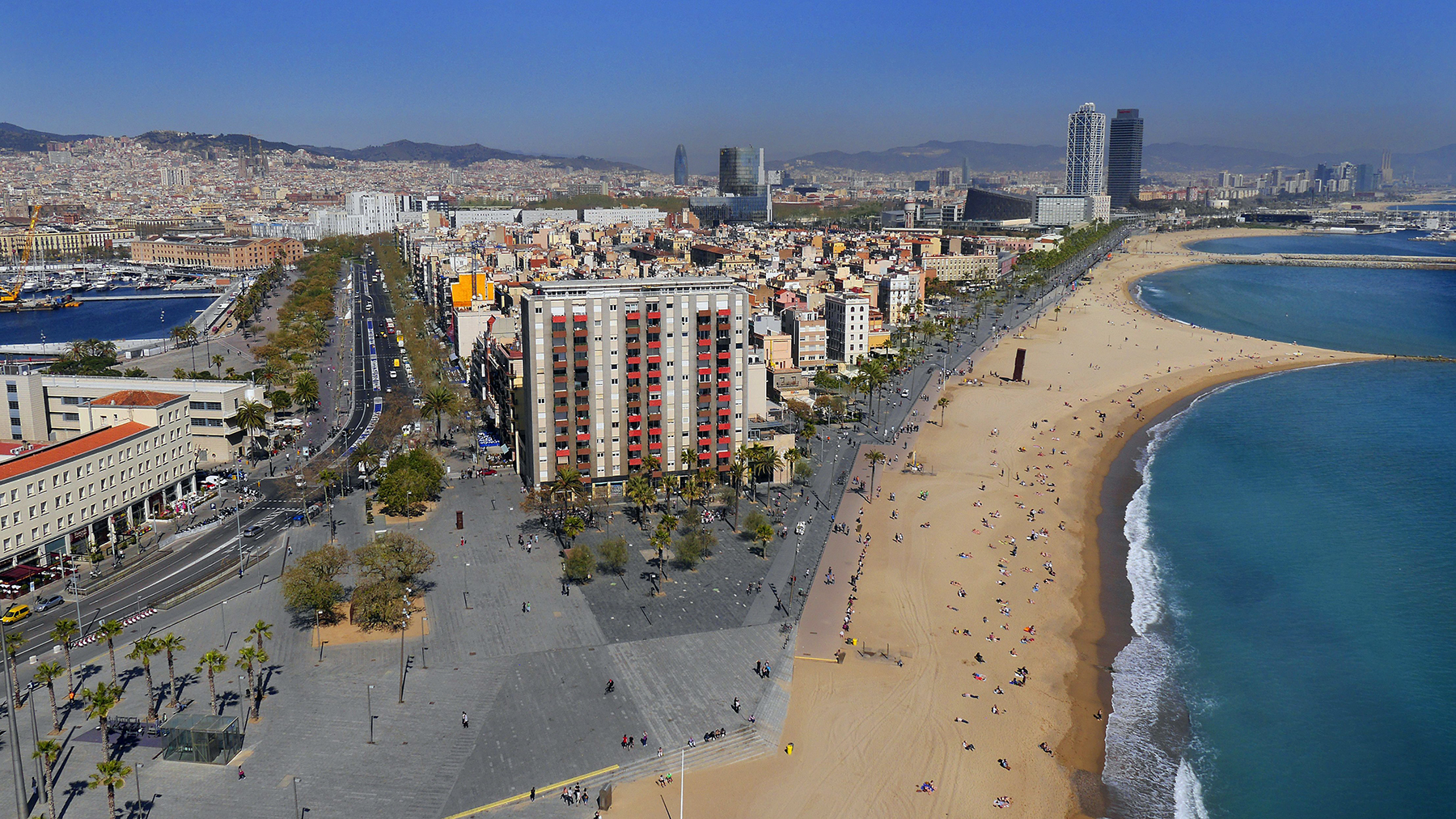 To see these and other sights, you can make interesting excursions with Russian guides