The Three Sisters – Rocks in Australia

The most famous part of the Blue Mountains in New South Wales is undoubtedly the rocky formation on top known as the Three Sisters. The peaks are located 110 kilometers west of Sydney. “The Three Sisters” is a group of three stepped freestanding sandstone stone pillars, each with its own name. The first rock, called Meehni, and rises at 922 meters above sea level, the second – Wimlah, a little lower – 918 meters, the smallest of them, ends at a height of 906 meters and is called Gunnedoo. 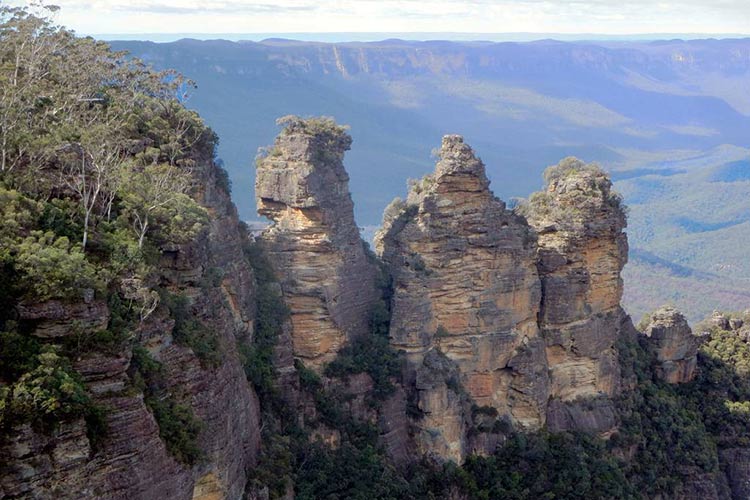 Blue Mountains began to form 200 million years ago and was originally a large bay in the ocean, surrounded by high mountains. Over time, the bay filled with sand and rocks washed down from the mountains. All of this was compressed by time and the forces of nature into a rock called sandstone. Pressure from the Earth’s interior slowly pushed the formation out, turning it into a plateau. Over the millions of years of its existence, sediment flowed into the fractures, winds blew, and the rock succumbed to erosion, acquiring a new topography. The plateau is now broad valleys with narrow gorges surrounded by steep sandstone cliffs.

People from all over the world come to see the beauty of the mountains in Echo Point, just a couple of kilometers from the freeway. And no wonder, as the cliffs serve as the calling card of the Blue Mountains and their formation is shrouded in indigenous Australian Aboriginal legend.

According to legend, in ancient times lived in the valley Jemison three girls Gandangarra tribe. They happened to fall in love with brothers from the neighboring tribe Nepean. The laws of the natives did not allow marriages between different tribes. The brothers became angry and started a bloody clash. The father of the beauties, for the duration of the war conflict, decided to keep his daughters safe, and appealed to the sorcerer to protect the children. The sorcerer took the lovers to a mountain and turned them into three rocks. He had intended to undo the spell as soon as the battle was over, but fate had decided otherwise. The sorcerer fell on the battlefield. The girls remained three slender rocks, for there was no one to turn them into men. Since then, the “sisters” have risen above the valley, as a reminder to future generations of the vicissitudes of reckless love.

At any time of the day, in the rays of the sun, the figures of the girls amaze visitors to the reserve with their incredible play of color. After sunset, their silhouettes impress with their grace against the night sky.

The second legend of the three sisters

But there is another legend of the three sisters that survives to this day. It says that the sisters Mihni, Vimla and Gannedu had a healer father named Taiwan. In those same old days there lived in the gorge a monster or evil spirit, Bunyip, who was feared by all. It was so dangerous to walk near the gorge that whenever the father went in search of food, he would hide his daughters on the rock behind the rocks. But one day, after saying goodbye to his daughters, the father waved goodbye, as usual, and began to descend down the rocks into the valley. Left alone, the beauties were frightened by a large centipede that suddenly appeared beside them. Michni took a stone and threw it at the centipede. The stone continued to fall off the cliff, crashing into the rock and plummeting down into the valley, angering Bunyip. The rock behind the sisters began to crumble, and they were left standing on a small ledge at the top of the mountain. Everything alive froze around them. The birds stopped singing, the animals froze, while Bunyip climbed out of his hiding place to look at the frightened sisters. As he approached, the agitated father, far below, turned his daughters to stone with a magic bone. The monster became angry and began to pursue Tywan. The healer decided to turn himself into a lyrebird to avoid the attack, but during the transformation he dropped his magic bone. Bunyip calmed down, and Taiwan returned in search of his magic bone, but did not find it. To this day, you can still hear the lyrebird singing in the mountains, scurrying about looking for the magic bone. Three silent stone sisters stand silent, waiting to be transformed back.

READ
Top 5 things to do in Tenerife, Spain

These days, many of the accomplishments of the past are consigned to oblivion. But in Katoomba the tale of the human feat of two enthusiasts who carved nine hundred steps in the rock from the valley to the summit is fresh. These heroes were James Jim McKay (1869 – 1947) and his assistant Walter ‘Wally’ Botting (1887 – 1985) and his associates. From the side of Echo Point you can see the panorama of the mountain range, but it is partially obscured from view by the trees that have grown. These days you can rent a telescope or use binoculars, but it is the opportunity to go up to the rocks themselves that lures visitors.

In February 1911, a local newspaper reported that James McKay had climbed the cliffs. He had climbed the mountain unassisted, without ropes or other special equipment, wearing casual clothes and shoes, and was convinced that, given the will and the means, an excellent hiking route could be established there. Initially the idea was ridiculed, but by 1916 permission had been obtained from the council to begin work on the project. By 1918 Mackay and co-workers had done a quarter of the work, but interrupted the activity due to the costliness of the project.

The idea was suspended for a dozen years, until in the early 1930s, photographer Harry Phillips published a colorful brochure with views of the Kotumba. This gave a new impetus to continue the work, because it became obvious that the project contributes to the development of tourism in the region, and thus the influx of funds for the development of the area as a whole. This pamphlet renewed interest in the project, and in 1932 Mackay continued to pursue his dream. On the first of October 1932, the route was officially opened. Politicians of all levels were present at the opening, including NSW Premier Stevens. It was he who announced the lookout. To top off the memorable day, three climbers climbed the highest of the cliffs and hoisted the Australian flag there.

These days, daredevils with drinking water and about three hours of their time are enthusiastically using the route created by intrepid Mackay in the last century. The reward for their courage is a magnificent view of local flora and a panoramic view of the scenic 51-degree cable car, which is currently the steepest cable car in the world. It used to be used to transport coal and oil shale, but the mine closed in 1945 and the route became purely a tourist attraction.