Towns and churches flooded by reservoirs

The cross of the church is all that remains on the surface. The whole village was flooded, and the residents were relocated against their will during the construction of the reservoir. Initially, not even the cross was visible, but then nature itself intervened. Because of the impact of a process called Elninho, when the ocean surface warms up a lot, a drought was caused and some of the water receded. 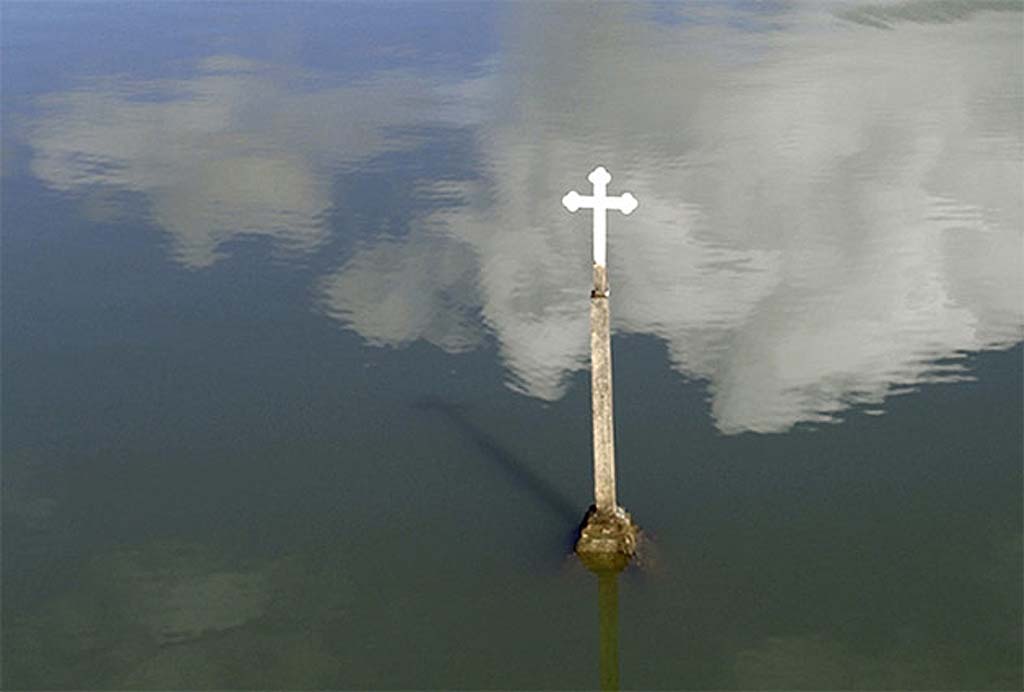 The towering spire of the bell tower has become a landmark in the village of Graun, Italy. And all because in 1950 it was decided to build a hydroelectric power plant there. During the construction, it so happened that the artificial lake Reshena overflowed its banks, and the water spilled over a huge area, flooding the village.

A total of 163 residences and 1,290 acres of farmland were destroyed. Miraculously, the ancient church, built in the 14th century, survived, and the spire of its bell tower still stands above the water. 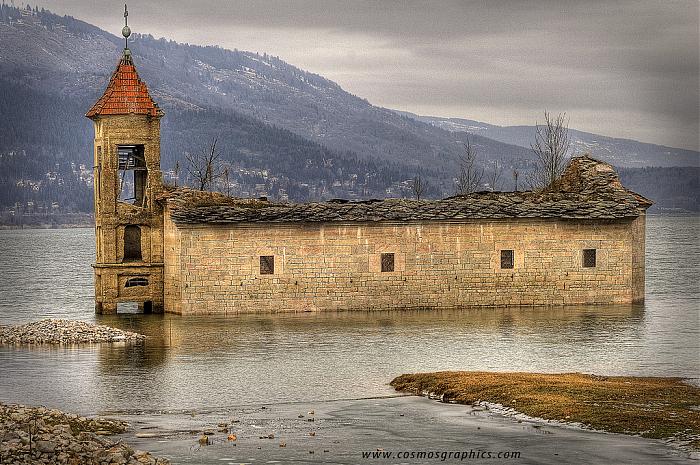 In 1850 in the village of Mavrovo, Macedonia, a beautiful church was built in honor of St. Nicholas. Services were held here for more than a hundred years. Until the local authorities decided to create an artificial lake near the village. During the construction numerous mistakes were made, which led to the flooding of the church. 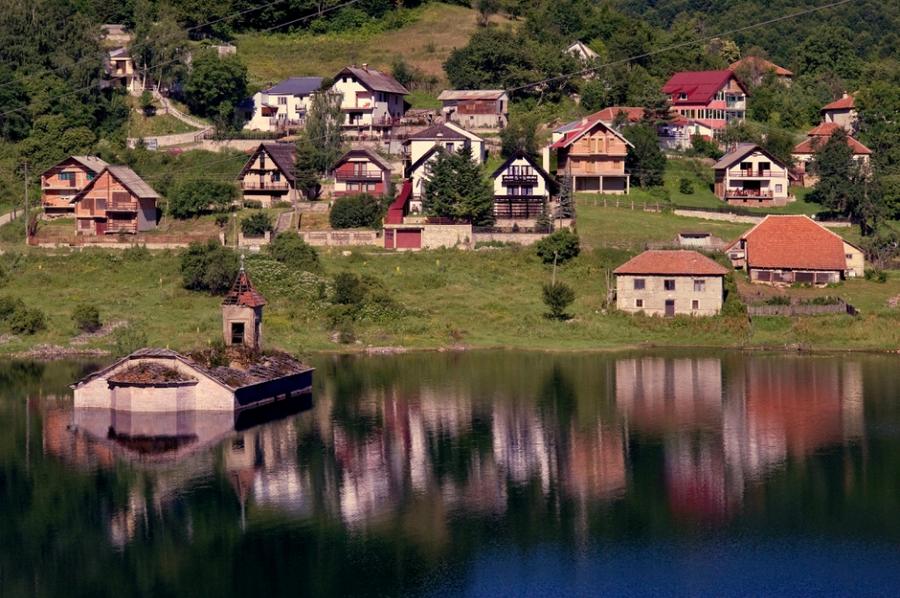 In the USSR many towns were flooded in the 1930s-1950s during the construction of hydroelectric power plants. The flooded area included 9 cities: 1 on the Ob River, 1 on the Yenisei and 7 on the Volga. Some of them were flooded completely (such as Mologa and Korcheva), and some partially (Kalyazin).

Once it was a high bank of the river, the monastery stood on it, and there was a noisy market square in front of it. Now in the middle of the river surface rises only a bell tower. 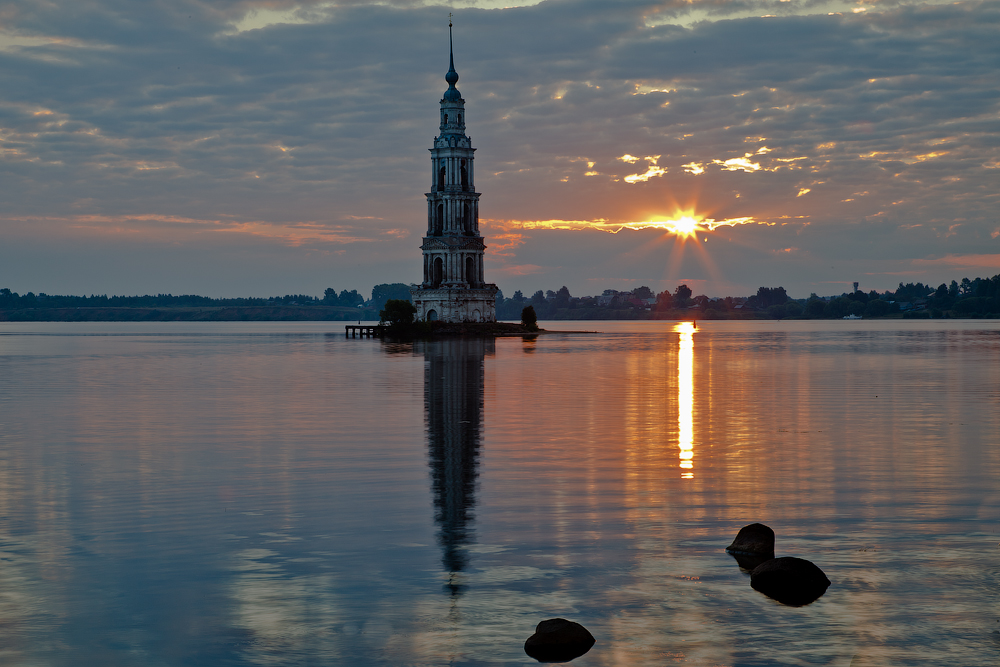 From the official history we know that St. Nicholas (Nikolaevsky) Cathedral was built in 1694 on the place of a monastery “Nikola na Zhabne”, which once existed in the XII-XIII centuries.

The bell tower, as part of the magnificent ensemble, was built later in 1796-1800 by Kalyazin masters. This construction is made in the style of Russian classicism. Its height was 35 fathoms (more than 74 m). It had 12 bells. The biggest bell of 1038 poods was cast in 1895 in honor of the accession to the throne of Nicholas II. 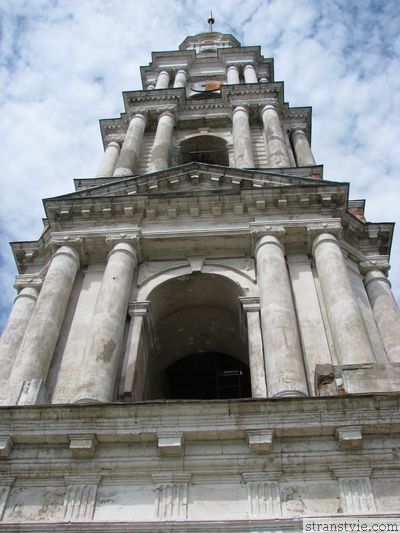 When the Uglich Reservoir was created the old part of Kalyazin turned out to be in the flood zone; the cathedral was dismantled, and the bell tower, which was planned to be converted into a parachute tower, was partially under water.

San Rafael is the only submerged town in Rio Grande do Norte. In its memory, the surviving snow-white bell tower with a balcony was called “Old Town.” Only it’s gone now, too. A few years ago the old church tower collapsed.

The pond that adorns this mysterious tower is only a pond on the campus of Enschede. Legend has it that the village of Drienerlo was located here before it was swallowed by water. Only the tower of the church survived. It was discovered in 1979 by Wim Schippers; according to him, the whole village is hidden there, in the pond! 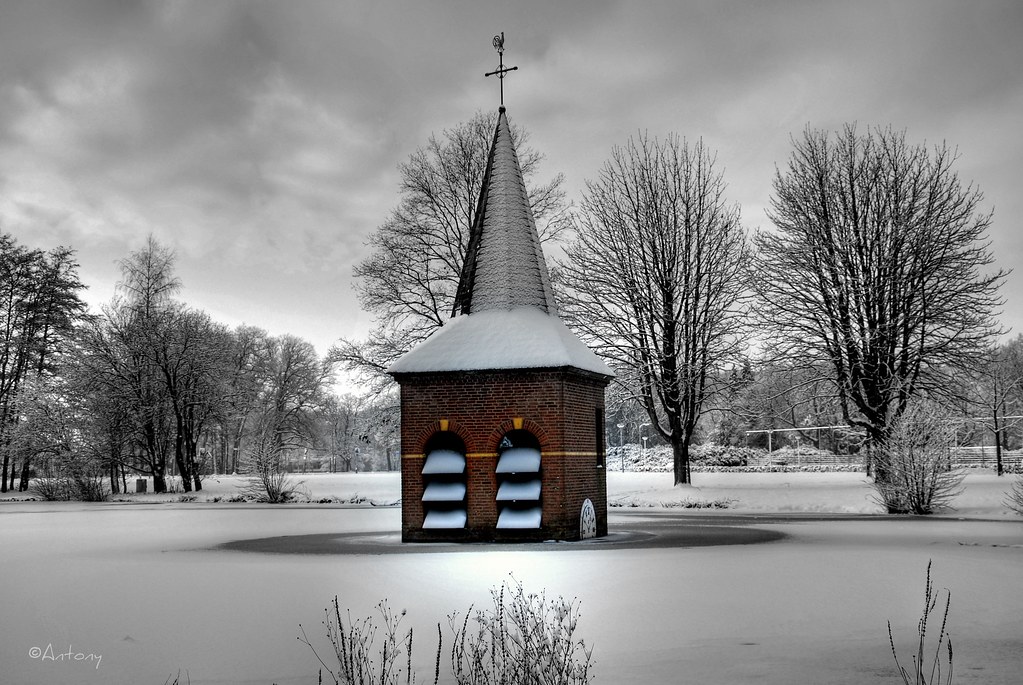 Church of the Savior of the flooded village of Gusintsi, Ukraine

The village was flooded during the filling of the Kanev reservoir. The church has been restored in recent years, before that there were only ruins. 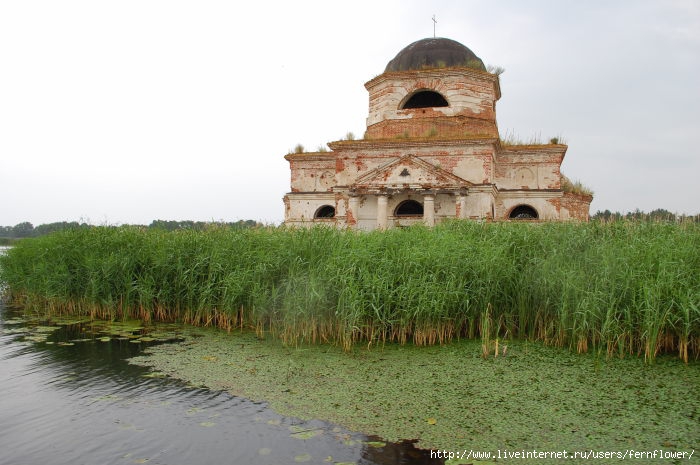 The flooded Church of St. Vladimir in the former village of Arkhangelskoye-Chashnikovo, Smolensk region 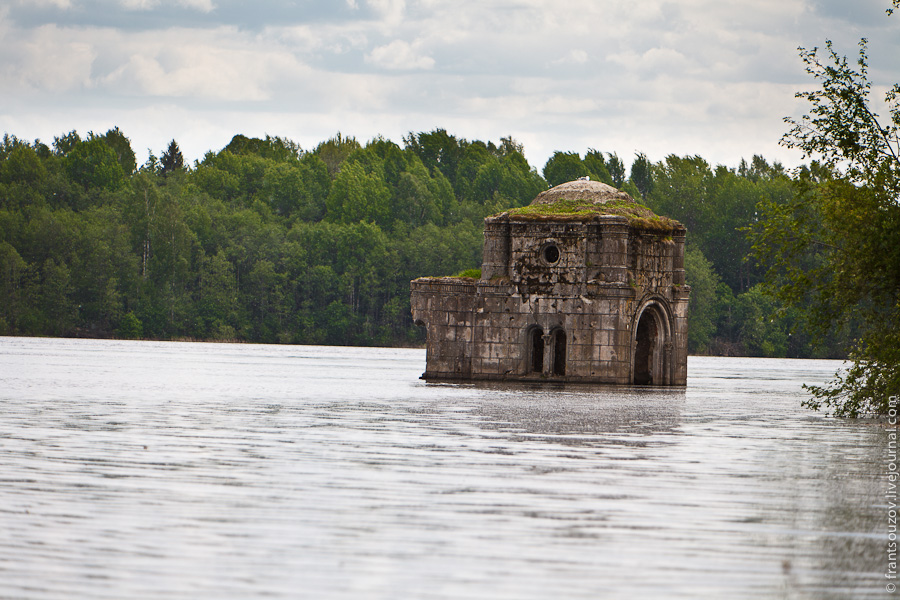 The church was flooded during the construction of the Vazuzskoye Reservoir in the 70s. And the building is very interesting, the walls are made of huge polished stones, Romanesque style.

READ
10 things to do in Helsinki, Finland 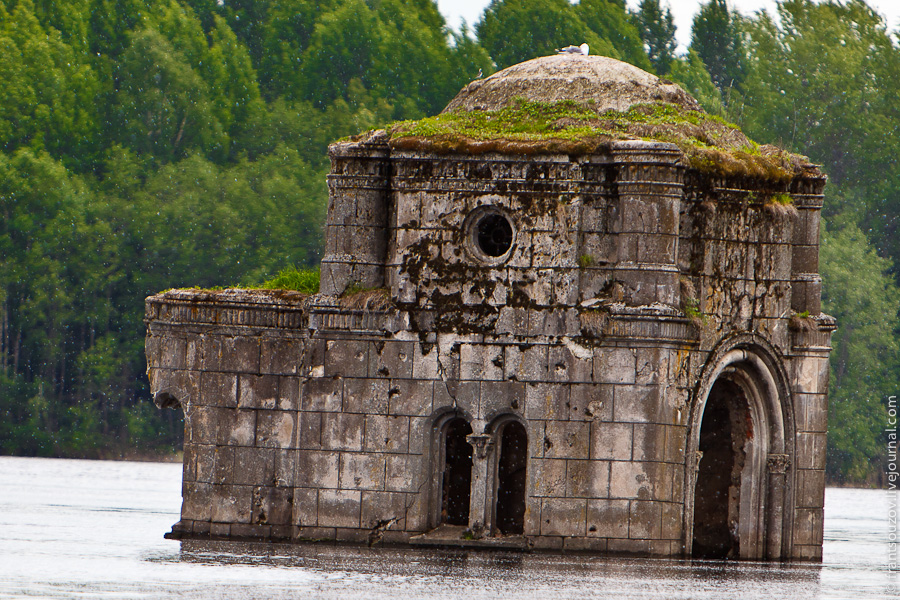 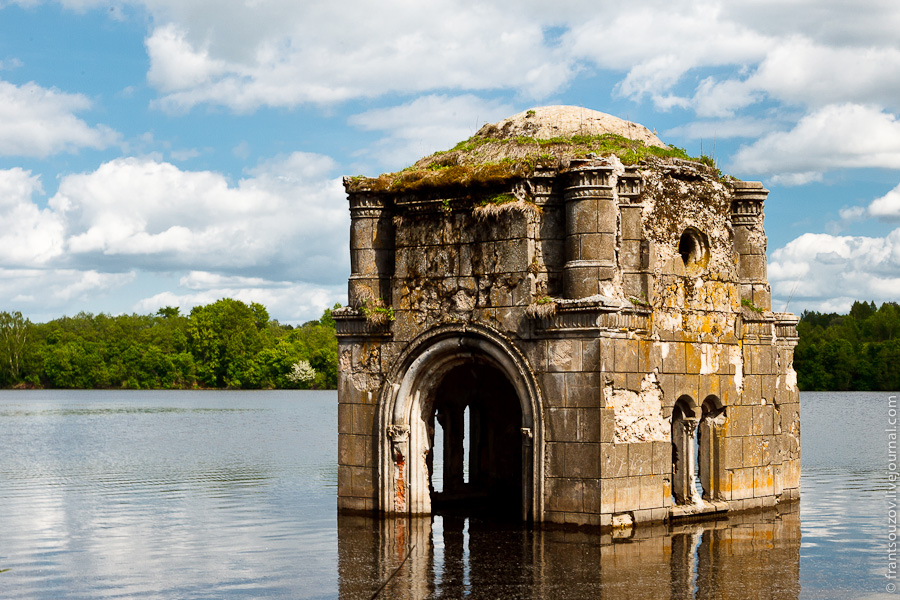 Church of the Nativity of Christ built in 1780, Krohino, Russia

The Church of the Nativity in the former Krohino Posad is a symbol of the disaster that befell the Russian North. For decades, it has miraculously remained intact during the construction of the Volga-Baltic Waterway, stands encircled by the waters of the Sheksna River and collapses. But for the fifth year already a group of volunteers of not indifferent people, without any help from the authorities, is fighting for the preservation of the unique cultural heritage of Krohino. 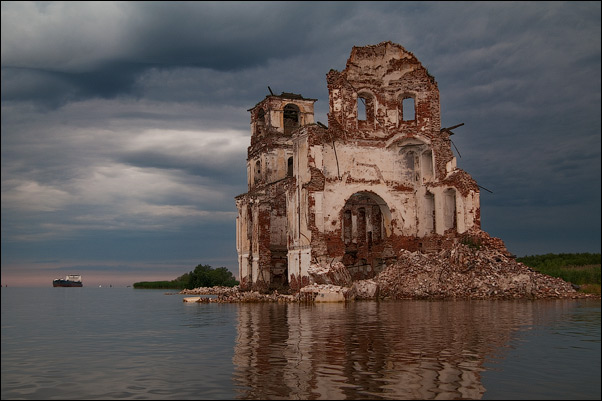 Here is this church, built at the beginning of the 19th century before it was destroyed: The drought that came to the southeast caused the reservoir’s water level to drop by nearly 24 meters, allowing most of the submerged ruins to become visible. 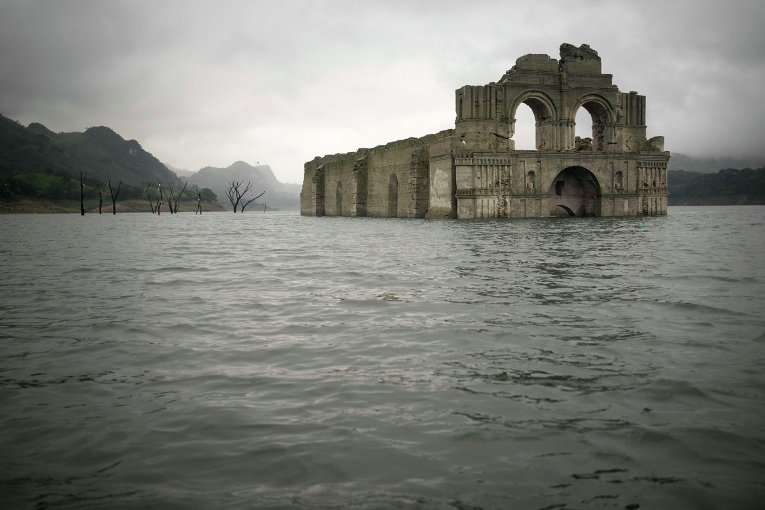 According to architects, the temple was built in the 16th century by Spanish colonists. Above the water appeared the walls of the structure, the height of which in some places reaches ten meters. The length of the discovered building is about 61 meters, width – 14 meters.

The temple, which was flooded in the 1960s because of the construction of a nearby dam, does not appear on the surface of the artificial reservoir for the first time. In 2002, the water level lowered so much that connoisseurs of architecture could see the ruins from the inside on their own. This time, guided tours are conducted by local fishermen in their boats.

The Church of the Holy Rosary in the Indian state of Karnataka is a surreal sight, and every year it appears over the water and disappears again into the depths. The history of the church begins in the 1860s, when it was built near Hassan.

A century later, in the 1960s, a dam was built next to the site. The village was moved to make way for the Hemawasi Reservoir, but the church remained. During the rainy season, the building slowly sinks into the water and people have to wait until it’s time to rise and show its charm and grace – not to mention the superb brickwork.

The City of Mologa – Russian Atlantis 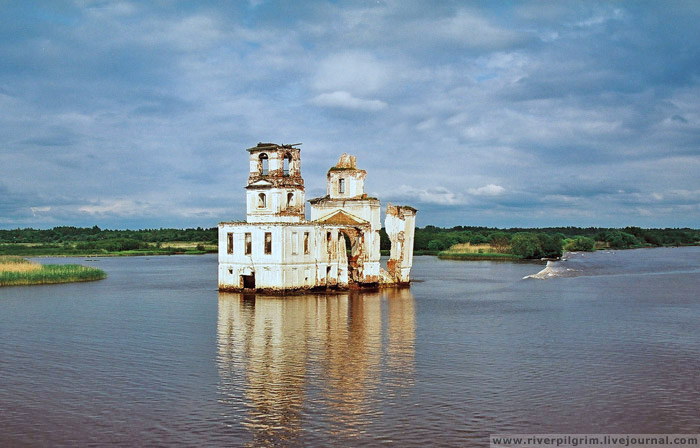 In September 1935 the USSR decided to build the Rybinsk hydroelectric complex. According to the project, the water level was to raise to 98 meters. But on January 1, 1937 the project was reviewed, and it was decided to raise the level to 102 meters. This allowed to increase the capacity of the Rybinsk hydroelectric power plant one and a half times, but at the same time the area of flooded lands had to increase almost twice.

The grandiose construction threatened the existence of the town of Mologa and hundreds of villages and villages in the Yaroslavl region. When the residents of Mologa were told that their small homeland would soon cease to exist and disappear under water, no one could even believe it. At the time, the district center of Mologa had about 7,000 residents. The resettlement of residents began in the spring of 1937. Most of the Mologa residents were sent to the village of Slip, not far from Rybinsk. But some residents stubbornly did not want to leave their homes. There was a report in the NKVD archives that 294 people did not want to voluntarily leave their homes, and some of them even threatened to handcuff themselves with locks. According to NKVD instructions, methods of force were applied to them.

There are hundreds of letters in the Rybinsk archives, all of which repeat the same request: not to evict them for the winter and to allow them to live in their old place until spring. The most incomprehensible in these letters are the dates. We are talking about the winter of 1936-37. Filling of the reservoir began only in 1941 and ended in 1947. No one understood why there was such a hurry: neither the local authorities, nor the party bodies, nor the NKVD officers, who were controlling the resettlement. But orders are not discussed. Volgogolag was waiting for the dissatisfied, Volgostroy was waiting for the obedient, the only large organization that was creating new jobs. It is no secret that both Volgogolag and Volgostroy were under the jurisdiction of the NKVD and were, in fact, one organization. On the construction of hydraulic structures on different sides of the barbed wire were people forced to do a common thing: to drown their small motherland…

April 13, 1941 near Rybinsk the last sluice of the dam was closed, and the water gushed into the floodplain. The city of Mologa, which had a history of nearly eight centuries, went under water. All of its territory was flooded in 1947, only the heads of some churches remained above water, but after a few years they disappeared under the water.

Under the flood, in addition to the Mologa, were about 700 villages and hamlets, whose population was about 130,000 people. All of them were resettled to other regions. The flooding continued until 1947. Including 3,645 km² of forests were flooded. 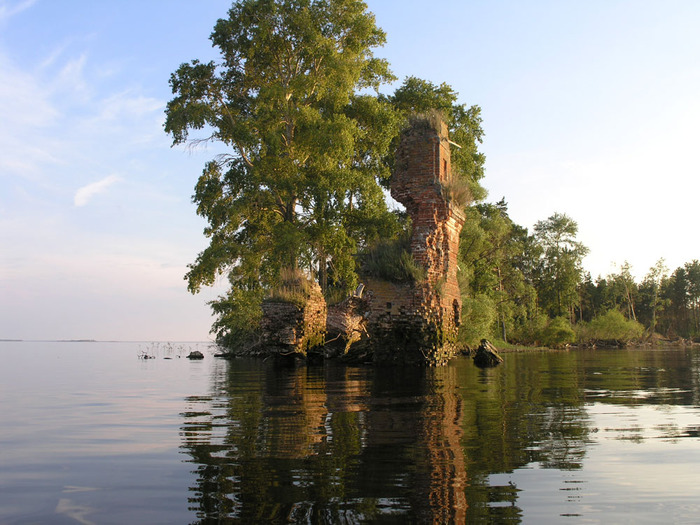 But sometimes “Russian Atlantis” can be seen. The water level in the Rybinsk reservoir often fluctuates, and the flooded city appears above the surface of the Volga. You can see preserved churches and brick houses.

Thus, the summer of 2014 was hot. Because of the drought, the Volga River shoaled and the flooded city of Mologa came to the surface. House foundations and street outlines emerged from the water.

A church in the village of Jamana, Romania, flooded by toxic waters 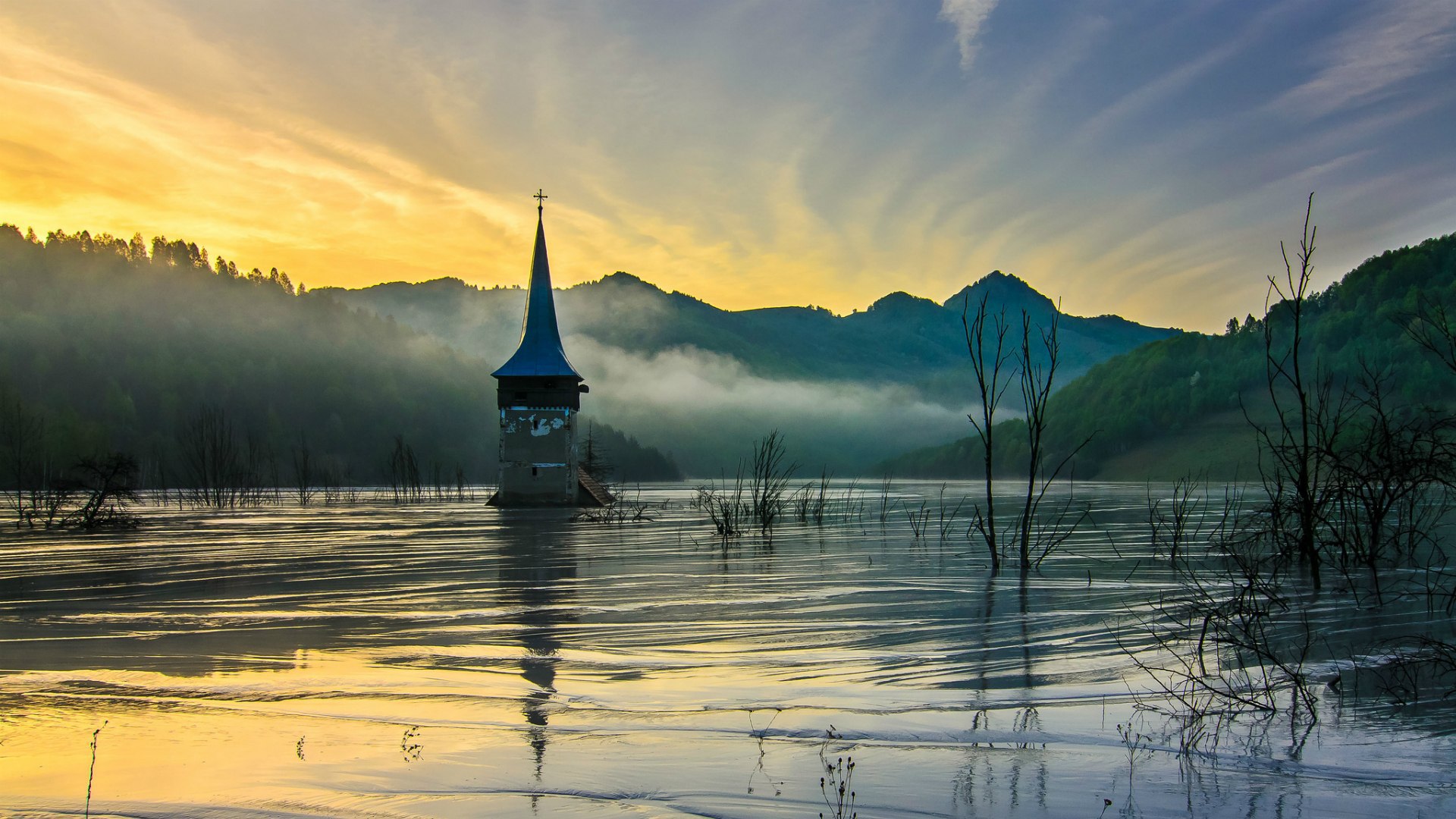 In 1978 the Romanian authorities forced the villagers to leave their homes to make way for the toxic waste.

The lake is very toxic with large amounts of cyanide. A church tower and a few houses are all that remain to this day.