The Place de Massena is one of the main attractions of Nice, France 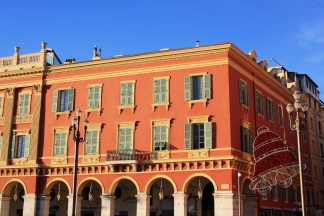 This is one part of the main article about the sights of Nice.

The main square of Nice – Place Massena , founded in 1840 and named in honor of a successful French commander at the time of Napoleon Bonaparte – André Massena. The characteristic feature of the square gives its frame ensemble of buildings, painted in the so-called red color of Pompeii, an elegant fountain with a statue of Apollo in the center called the Fountain of the Sun (Fontaine du Soleil) and sculptures by Spanish artist Jaume Plensa. 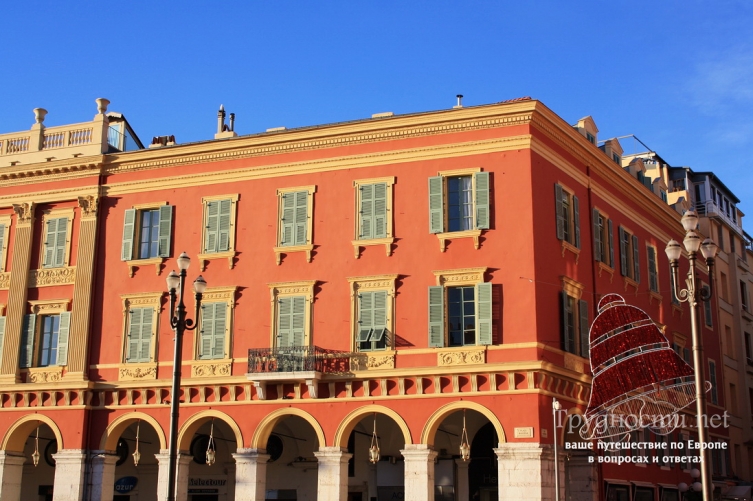 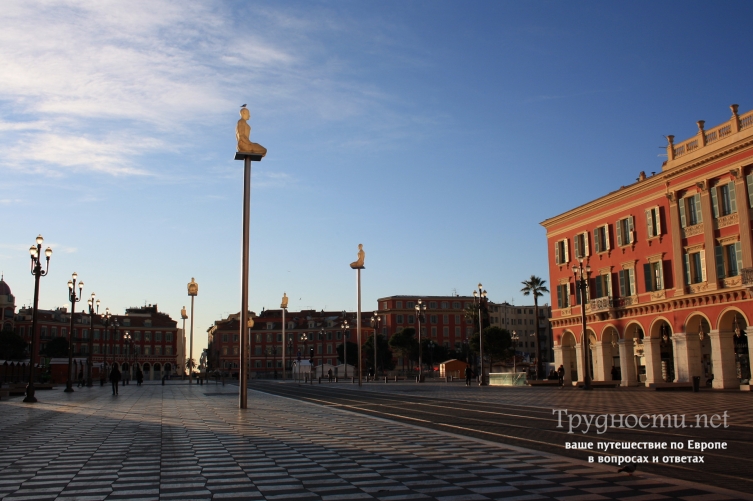 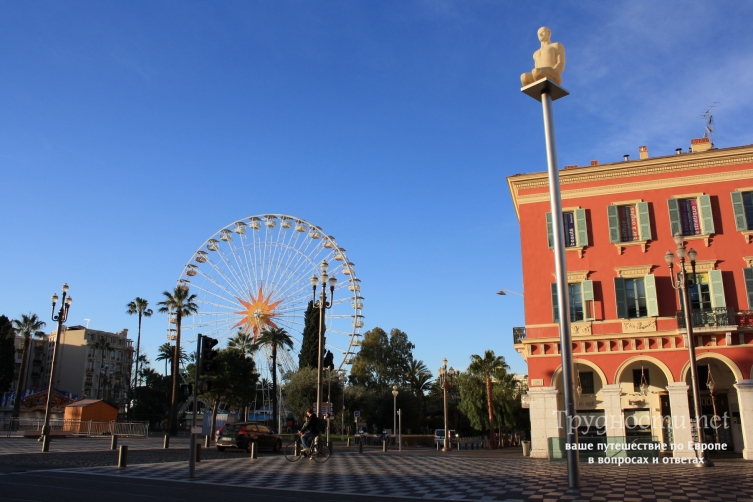 The fountain was created in 1956 by Alfred Gagno, then in the 1970s the statue of Apollo for some reason fell into disgrace and was moved out of sight – in one of the parks of the city. In all its glory, to the delight of citizens and tourists, Apollo returned to its original place, the fountain, only in 2011. And not for nothing. The fountain became a favorite meeting place for residents and tourists. It’s so nice to say “Meet me in Nice by the fountain” and everyone knows where it is.

Original work of Spaniard Jom Plens (he is also the author of the famous lettered sculpture “The Wanderer” in the port of Antibes) in the form of figures sitting on the lampposts and symbolizing seven continents, became one of the most recognizable sights of Nice. As darkness falls, the figures slowly change color. According to the author’s idea such “flickering” represents a dialogue – continents, civilizations or just people – everyone decides for himself, that’s what art is. 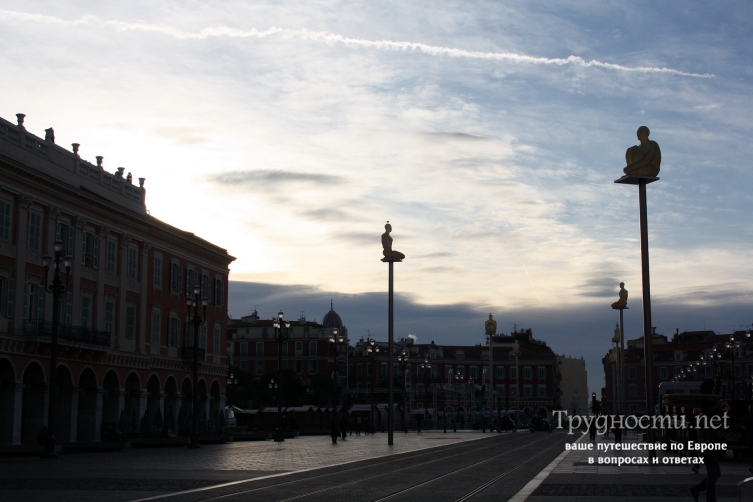 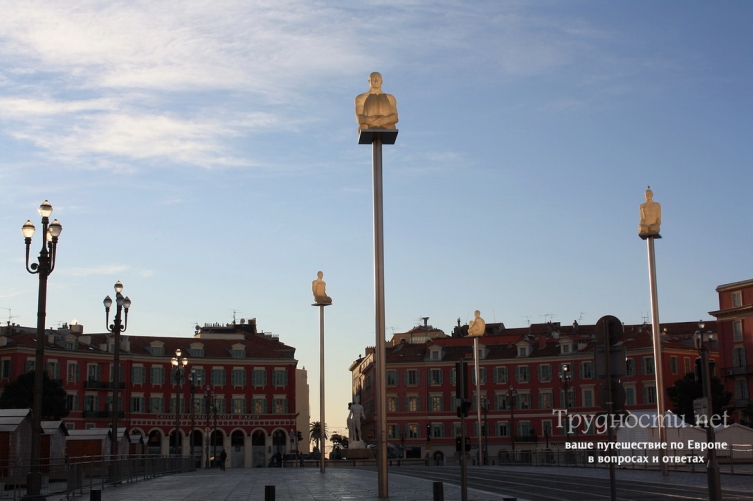 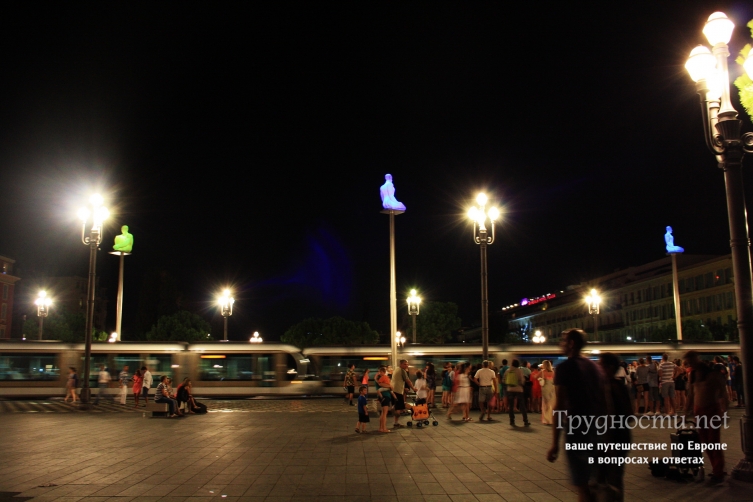 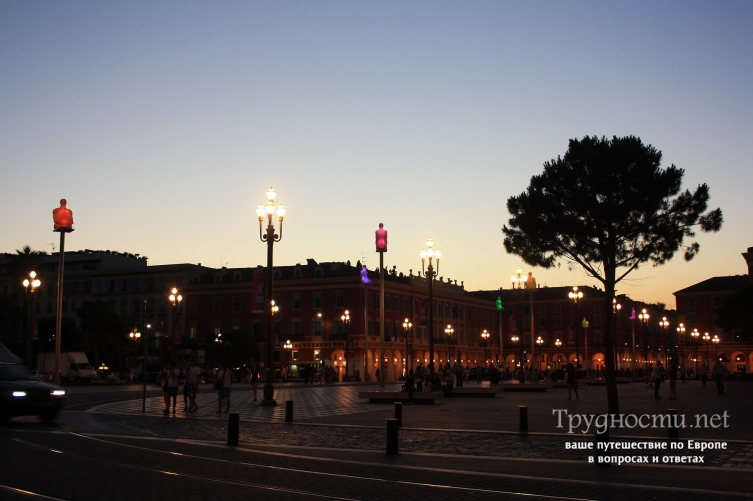 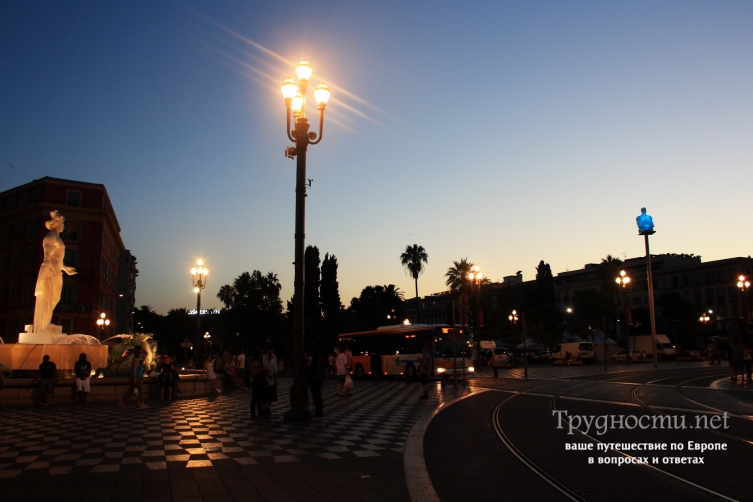 The Promenade du Payon, which opened in October 2013, is directly adjacent to the Place Massena. This was a highly anticipated and significant event for Nice. As part of a global plan to renovate and improve the city’s infrastructure, the authorities decided to demolish the bus station and parking lot next to the Old Town to create a long, green pedestrian zone with fountains, extending to the Museum of Modern Art and the Nice National Theatre. The process of reconstruction was protracted and accompanied, as usual in the French, criticism of the actions of the authorities, some citizens expressed doubts that the Promenade will be a success. Today, however, all the difficulties of the transition period are behind us, the space has indeed become much “airier”, and the inhabitants of the city are happy to walk on another beautiful promenade of the city. Its name was the subject of discussion, but in the end it was decided to call it by the name of the river that flowed in this place and many years ago was hidden under the ground – the Pajón. The area of the Promenade is 12 hectares, there are various themed areas, for example, with fountains, for children to play, and there is free 24-hour Wi-Fi. 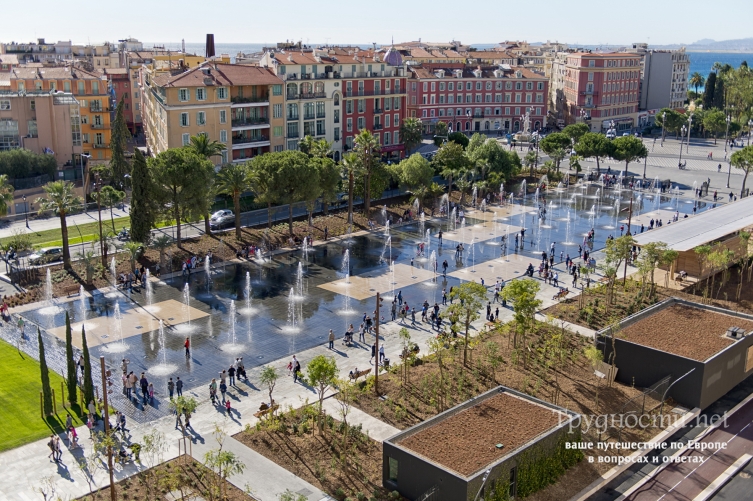 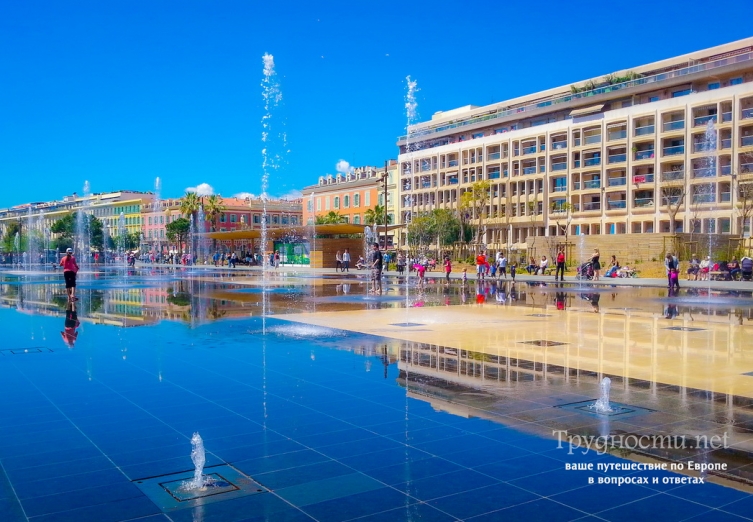 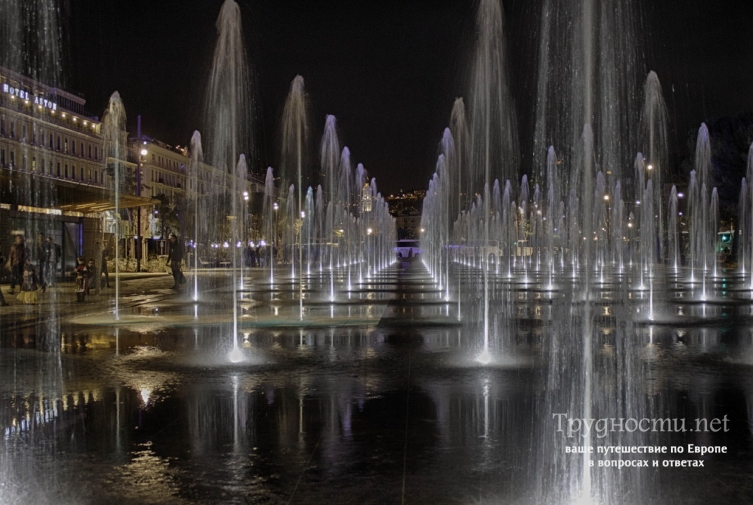 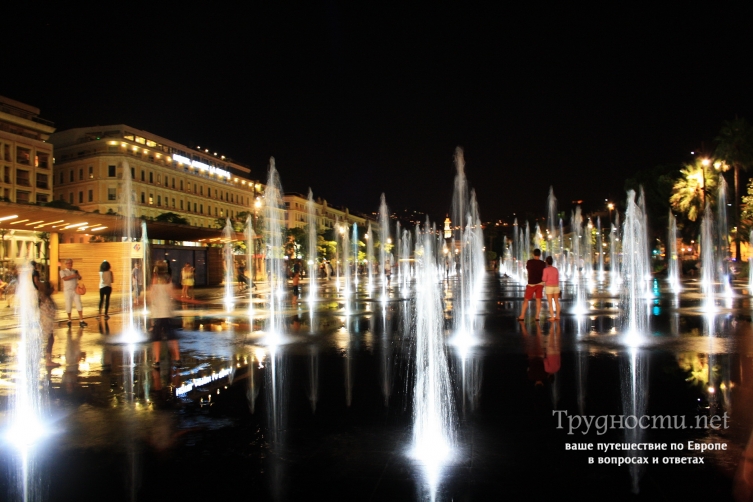 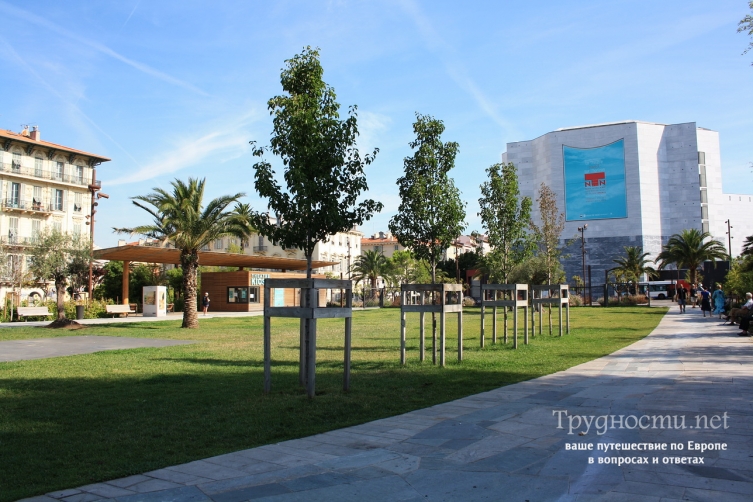 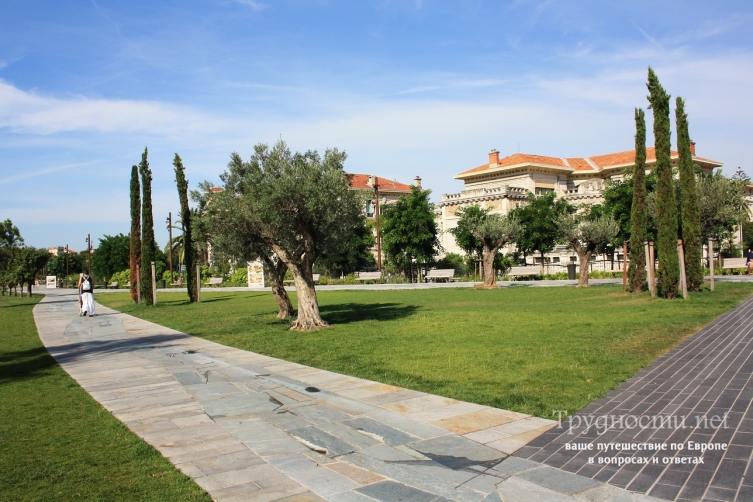 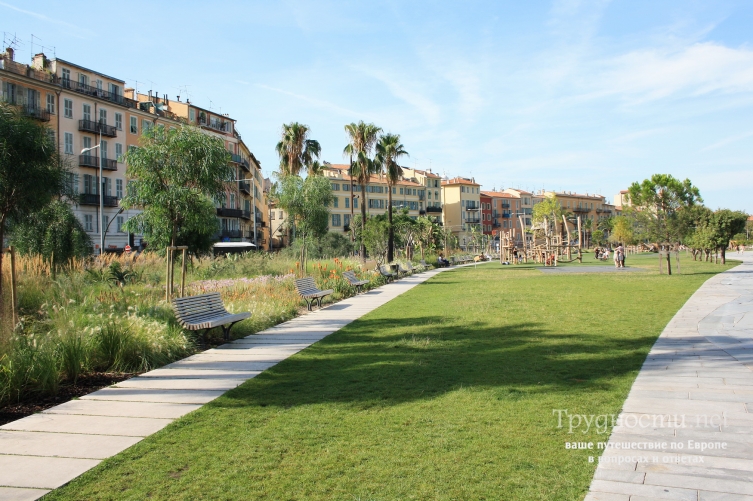 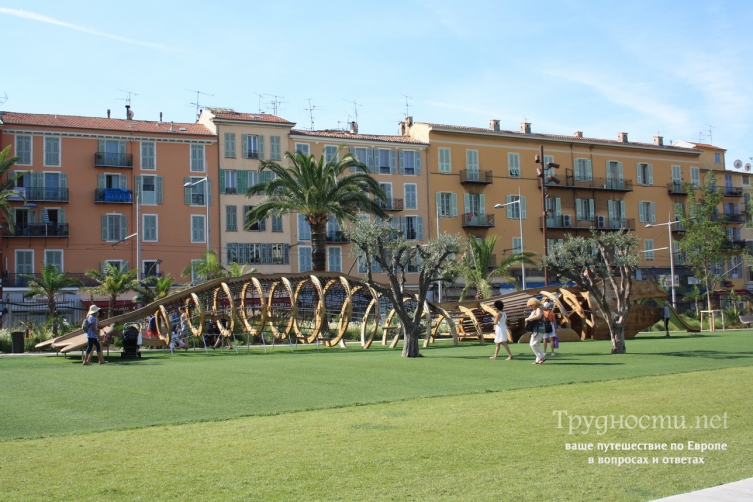 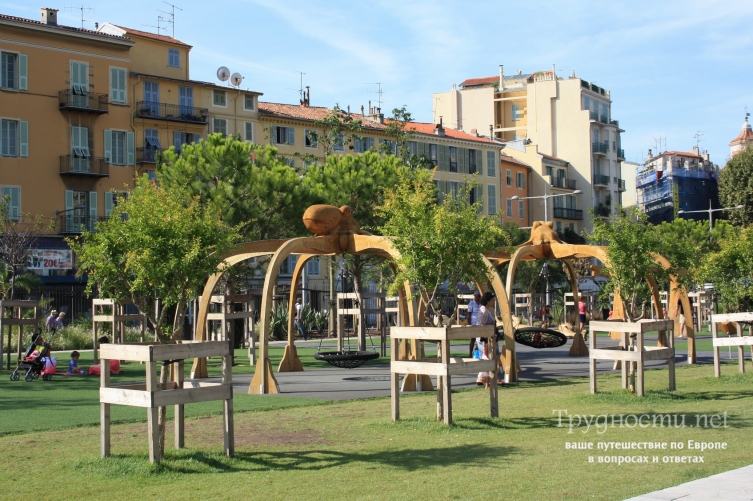 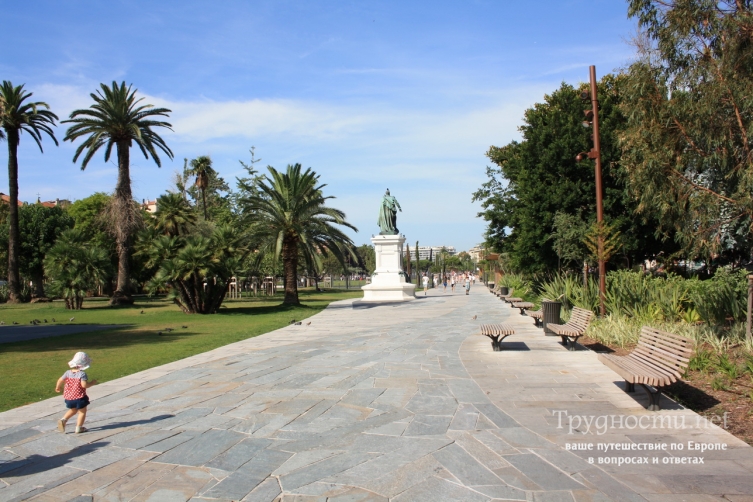 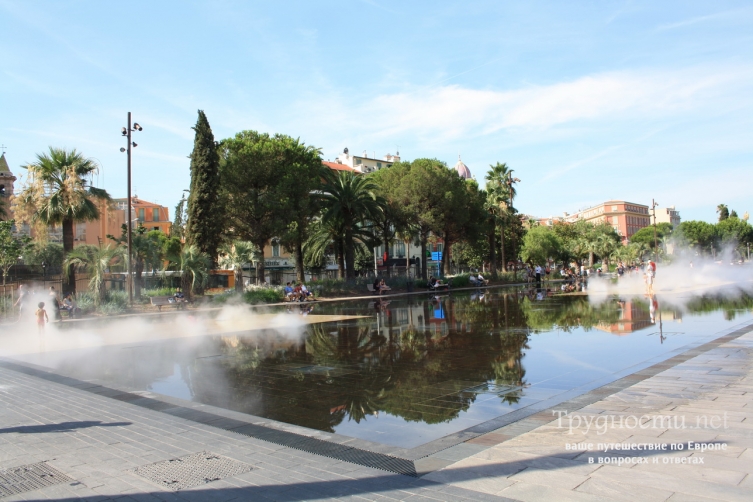 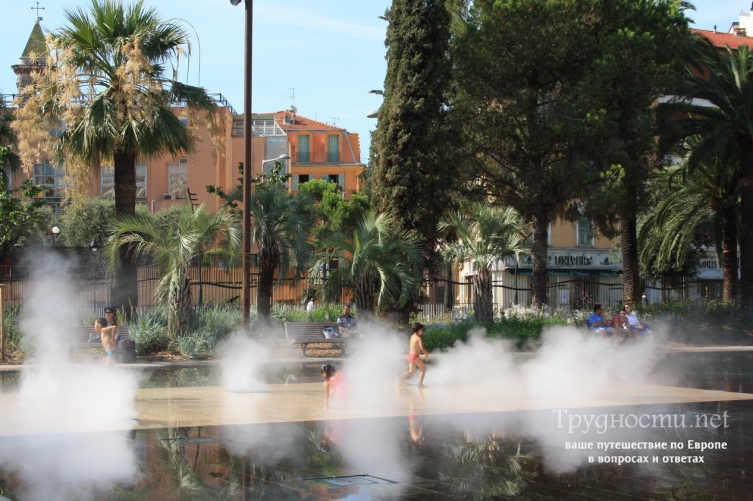 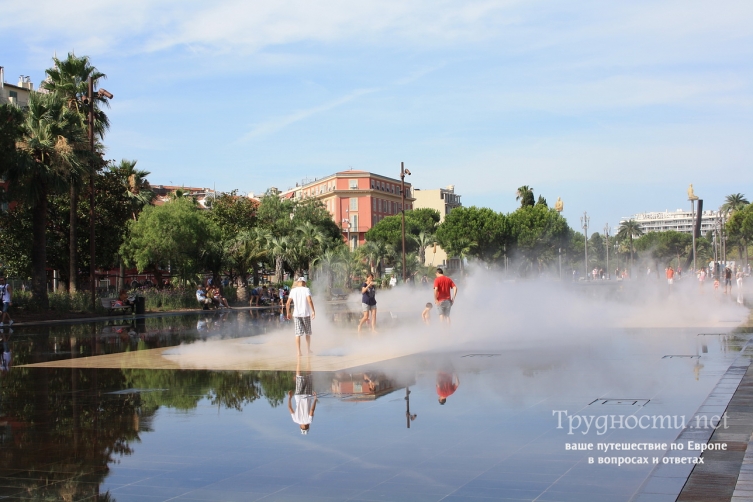 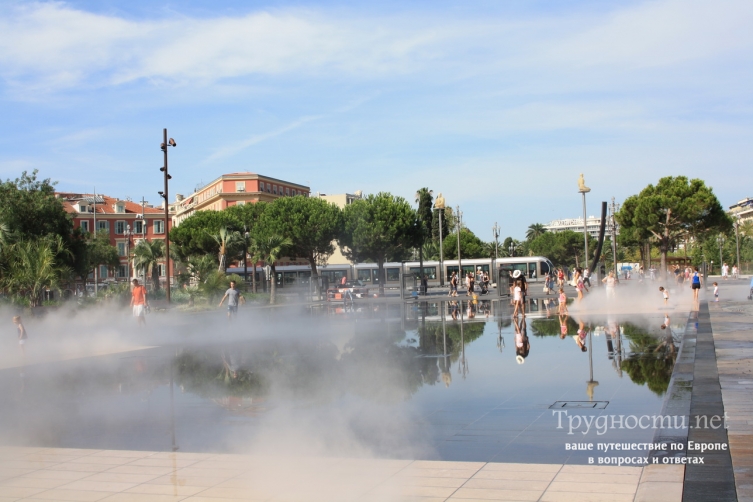 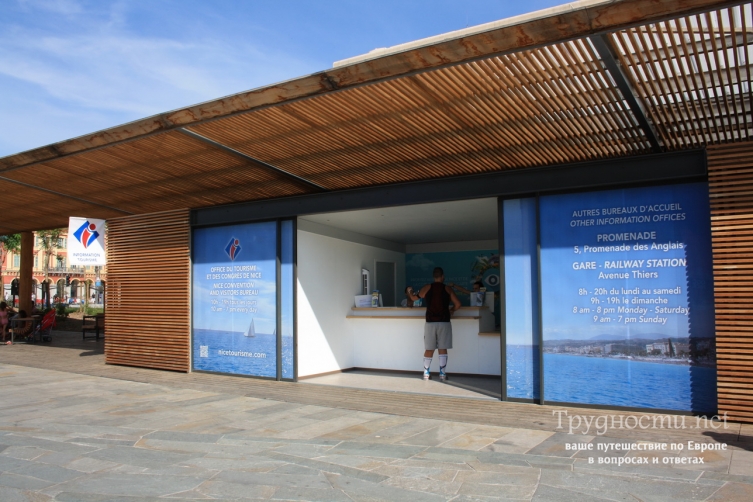 A leisurely stroll from Place Massena along the Promenade du Payon will take you to the Nice National Theatre and the nearby Musee d`Art Moderne et d`Art Contemporain M.A.M.A.C. This museum has an extensive collection of works by contemporary artists from the 1960s and 70s to the present day. The museum is open from 10 a.m. to 6 p.m. except Mondays, January 1, Easter Sunday, May 1 and December 25. Admission to the Museum is free. The M.A.M.A.C. has permanent and temporary exhibitions. There are terraces on the roof of the Museum that offer beautiful views of Nice.

What do we know about Nice? The capital of the French Côte d’Azur, the birthplace of Giuseppe Garibaldi, the place of death of Nicolo Paganini. It’s also the birthplace of André Massena in the vicinity of Nice. It is he who historians will rank alongside Napoleon Bonaparte. It was he that the Emperor spoke of enthusiastically as “the Beloved Child of Victory.” So why was the beautiful red and ochre Massena Square in Nice named after this warlord?

To begin with, André Massena was a talented military figure. Already at the age of 38 he gained fame as a great and visionary commander, and at 46 he became Marshal of the Empire. His military career developed rapidly and grandiose, despite the fact that he was not of noble birth.

A sad beginning to a brilliant finale

André Massena was born into a family of farmers in 1758. His father decided to change his occupation and became a private trader. But he soon died, and Massena’s mother was left alone with five children in her arms. She married for the second time, and six-year-old André clearly did not “fit” into her future plans. Good thing the boy had a kind grandmother. However, he was soon taken away by his uncle (a blood brother of Massen’s father), who saw an additional labor force in a young relative.

At the age of 13, the teenager ran away from his uncle’s boring home and enlisted as a cabin boy on a merchant ship. The contract “with the sea” lasted five years, after which, he matured, strengthened physically and morally, decided to disembark in Toulon to find his distant relative – non-commissioned officer Jerome-Marcel Massena. Unlike his previous uncle, this one was very attached to the young man and tried to give him a good upbringing and education. He saw his nephew in a military uniform. So the young Massena connected his life with the military craft.

Now he was no longer as lonely as before. In his uncle, he felt support and care, which he lacked for those long eleven years. Within a year or so of enlisting, he was promoted to his first rank, corporal. Another year later he was promoted to sergeant. For those times it was a proof of uncommon ability, diligence, love for the art of war, which unambiguously testified in favor of the correctly chosen field of activity.

Later Massena served in the Royal Regiment, where he received a brilliant school of military art and tactics. Superiors repeatedly noted the ability of the young non-commissioned officer. He was given the opportunity to command the soldiers during formation training and was even praised for the tactics he used. However, his background strongly hindered his ascent up the career ladder and in 1789 he submitted his resignation.

In the same year Massena married a surgeon’s daughter and opened a grocery store. But his thoughts more and more often returned to service in the regiment. In part his return to the military field was helped, as blasphemous as it sounds, by the French Revolution. Massena dreamed of exploits, of new ranks, to which he had not been able to serve under the old regime, but what the new time promised. He was one of the few who enlisted in the volunteer battalion of the Var department. Small and puny, he nevertheless possessed the rare quality “…of inspiring others to believe in victory. He was elected lieutenant colonel by the soldiers of the battalion themselves. And just a year later Massena became a brigadier general.

He led the column that stormed the forts of L’Artig and St. Catherine. Incidentally, Bonaparte himself fought in another regiment. For the brilliantly conducted operation in Toulon, André Massena received the rank of division general, and a little later he was appointed governor of Toulon.

He subsequently participated in the Italian campaign of 1796-1797, in which he won his first major victory at the Battle of Loano. By the 1796 campaign Massena’s military career had changed. He became Bonaparte’s right-hand man, which opened up great opportunities for him. What Massena had so strived for – new honors, fame, money – began to happen to him.

Subsequently, the division under Massena takes part in many battles, including the three-day battle of Rivoli, thanks to which he later received the title of Duke of Rivoli. Bonaparte repeatedly celebrated the general’s military merits, but the latter in turn was offended by Napoleon, believing that he belittled his contribution to military victories.

The most grandiose battles under Massena’s command:

The marshal is unclean.

Despite his outstanding military abilities, Massena was a proud, vain and arrogant man. For example, when in 1804 André Massena was appointed marshal of France, now the Empire, along with seventeen other generals, he replied, “Oh, yes, one of eighteen. And at the same time, he admired the courage and virtuoso command of the other military commanders, albeit opponents. He noted with envy that he “would have given all the victories just for one Swiss campaign of Suvorov. It was about the legendary and victorious Suvorov’s crossing of the Alps, when the Russian army defeated the French.

Massena loved being rich. He loved money so much that even fame and titles did not mean much to him if they did not imply monetary rewards. He was accused more than once of swindling, a “sphere” where he went to extremes by extorting trophies from his own soldiers. Napoleon was often told of the general’s thievery. But the cup of patience of the emperor overflowed the fact when Massena began to sell trade licenses Continental system, which Napoleon held. Then the emperor ordered the confiscation of all Massena’s money in a bank in Livorno. The amount was enormous for those times.

Subsequently, however, Bonaparte and Massena interacted more than once. The emperor gifted his marshal with titles and castles, and he brought him victory after victory.

In 1817 Massena died. A huge number of people, including 200 generals, came to see him off for the last time. André Massena was buried in the Père-Lachaise cemetery. On the white marble tombstone were carved the names of the four great battles under his command:

On Rue de Rivoli in Paris, in the niche of the Louvre, a monument honors the legendary marshal of the Empire.

Attractions of the square

The Place du Massena was laid out in 1830, but until 1852 it was called the Place du Faubourg, the Suburban. Its colorful houses are effectively connected with each other by arcades of mixed colors: yellow, red and gray. On the southern side of the square in 1956 installed an amazing fountain “Sun”, depicting part of Olympus, which gathered all the major gods: Gaia, Mars, Venus, Mercury and Saturn. On top of them towers a seven-metre high Apollo. At one time, his majestic figure was removed and removed to the Charles Hermann Stadium, but in 2011 it was returned to its place.

The strangest composition of the square is the installation “Conversation in Nice”. Seven figures sit on tall “masts” on different sides of the street. As evening approaches, the white wax of which they are made begins to shine with changing neon light from within. The author of the scandalous sculptural group is Jaume Plens from Catalonia. “Scandalous” because the large white figures look too strange against the background of ancient buildings with pilasters and balcony balustrades in the characteristic Italian style.

READ
The Engelsbergs Ironworks is an industrial monument in Sweden

Piazza Massena stands on the very spot where the Pailon River once flowed. In the XX century the river was closed.

The east and west sides of the square are decorated with luxurious parks. The square is a pedestrian area. It is the place where the main events of Nice – the carnival processions – take place. In 1294, Charles of Anjou decided to make these places entertaining and colorful events. Since then, the annual carnivals in the month of February have been an old and good tradition for the people of Nice.