Stavka in Borgunna – the church that survived 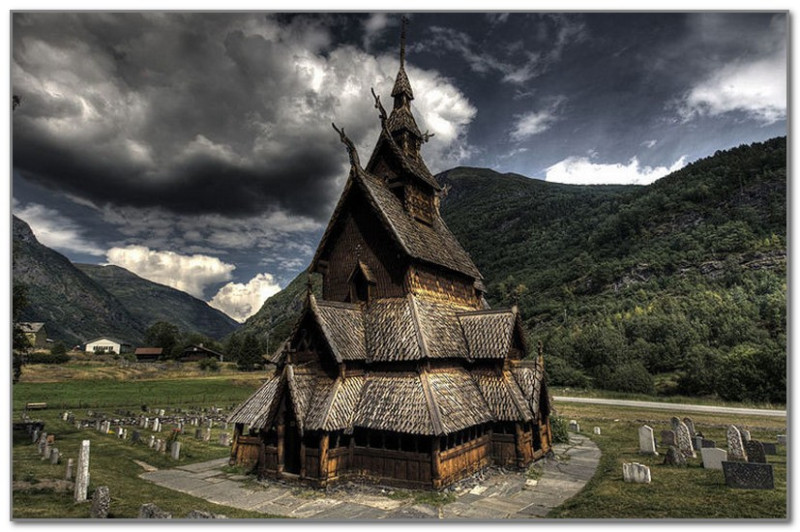 Norway is world famous not only for its stunningly beautiful natural scenery, but also for its unique architectural monuments. Particular attention should be paid to the local ancient churches, which here are called starkas.

There used to be more than one and a half thousand of them all over the country, but less than thirty survived to this day. That is why the largest and most beautiful stkarka in the town of Borgunne has another name, “the church that survived”.

Norwegian land came under the auspices of the Vatican as an independent ecclesiastical region in the 12th century. It was at this time that Catholic churches began to be built throughout the country, which, however, were very different from the usual Christian churches of central and southern Europe. 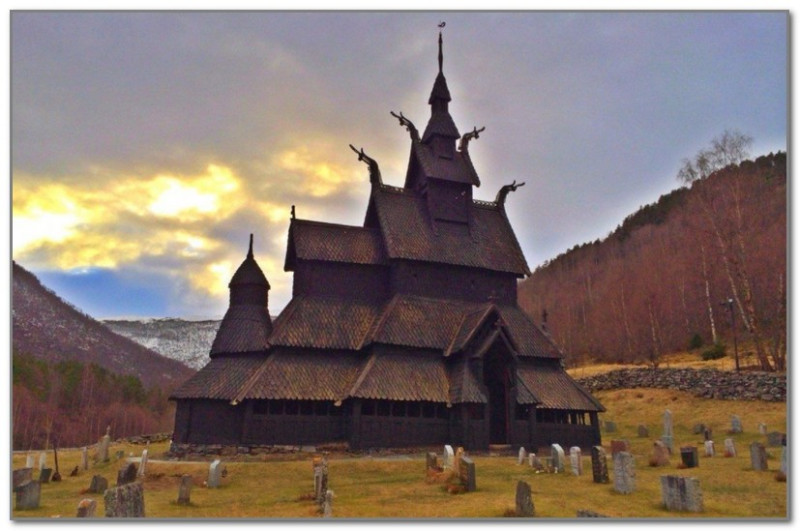 A stavkirk is a frame or mast church that stands out from all the others in a special way of construction. On the strong stone foundation in the form of a rectangle, powerful supporting bars were laid, around which the vertical columns were built, and which served as the basis for the entire structure. 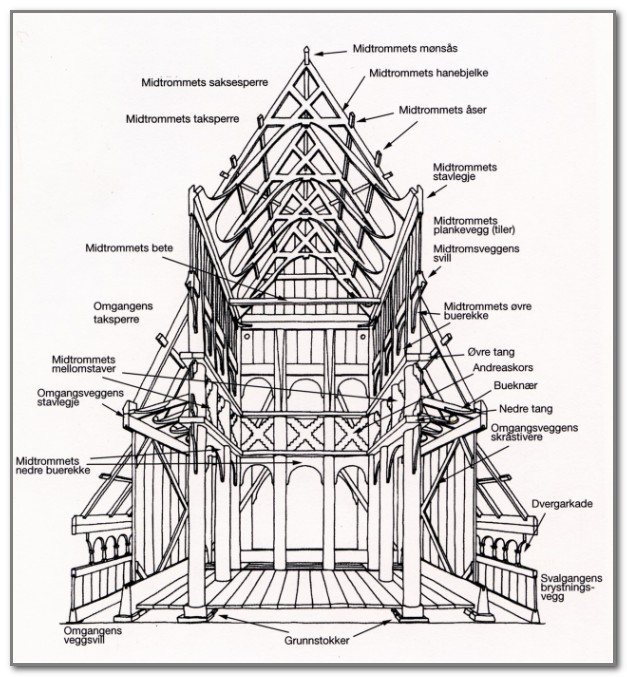 As with many ancient churches of the Russian north, the starka was built entirely of wood. There is not a single metal element in its construction, while the total number of parts is close to two thousand.

To give the whole structure a special fortress, medieval craftsmen used unique technology. For example, the trees that were intended for the construction were not chopped at once. Builders patiently waited until tar appeared on their trunks, and only then allowed them to work. 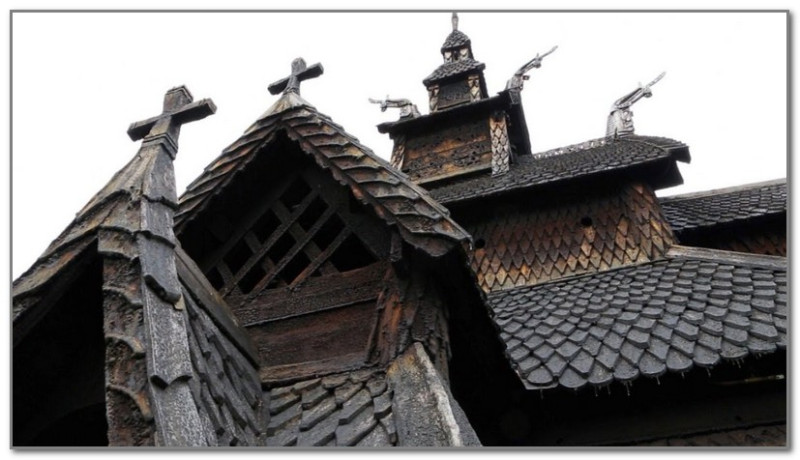 All of the building’s supporting elements were made only of the strongest, root parts of trunks that were designed by nature itself to withstand enormous vertical loads.

At the conclusion of construction, the starka was painted in bright colors. Today’s gloomy dark color is due to the fact that in the mid-twentieth century it was treated with a special protective compound. It so happened that the external effectivity of the temple had to be sacrificed to preserve its strength. 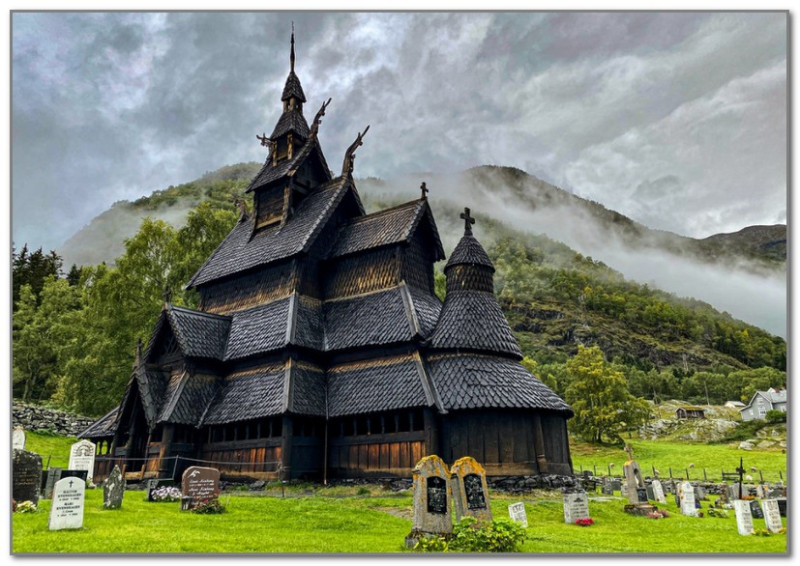 No matter how hard the holy fathers tried to completely convert the harsh Vikings to their faith, pagan customs have always been alive in Norway. Although Stavka in Borgunna is officially dedicated to St. Andrew, its decor has more pagan than Christian elements. 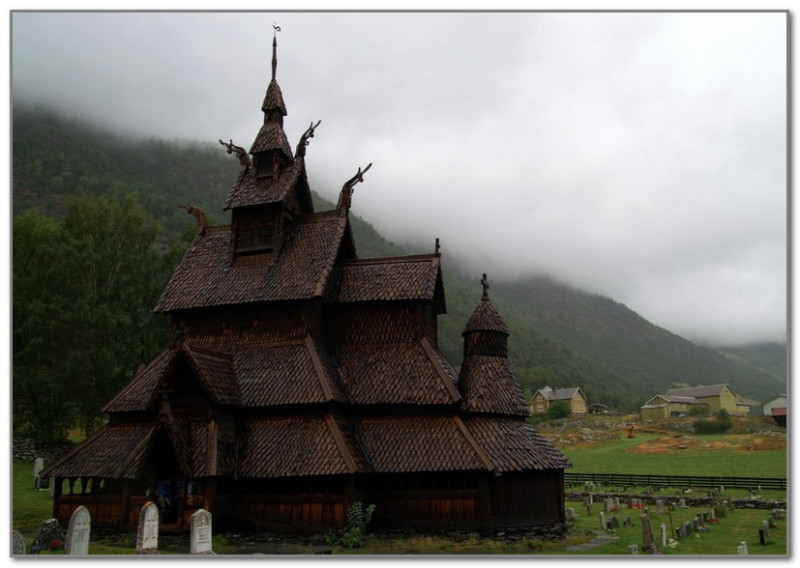 Even the material used for the construction of Stavkirka is a tribute to the religion of the ancestors. Ash in the myths of the Scandinavian peoples has always been considered a sacred tree. According to the legends, it was ash that became the world tree Yggdrasil, connecting the three worlds of heavenly gods Askard, the earthly world of people Midgard and the dark underworld Kingdom of the dead Hel. 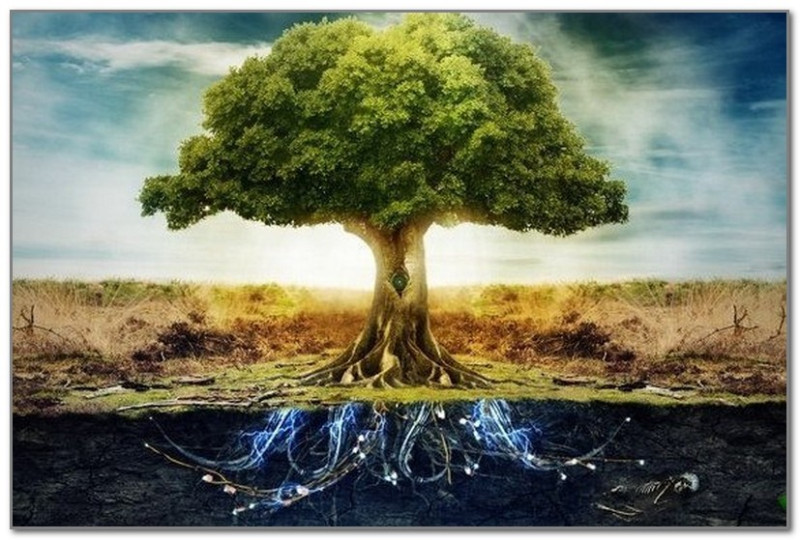 If you look closely, you can see ancient runic signs on all the doors of Stavka. Centuries-old habits of drawing runes-protectors were also reflected on the portals of the Christian temple.

Another pagan element in the decor of Stavkirky were dragons, which are located on the roof ridge, on the east and west sides of the building. The Scandinavians regarded dragons as sinister creatures, a meeting with which promised great misfortune. Here, they perform the same role as the gargoyles on Gothic temples, namely to frighten evil spirits away. 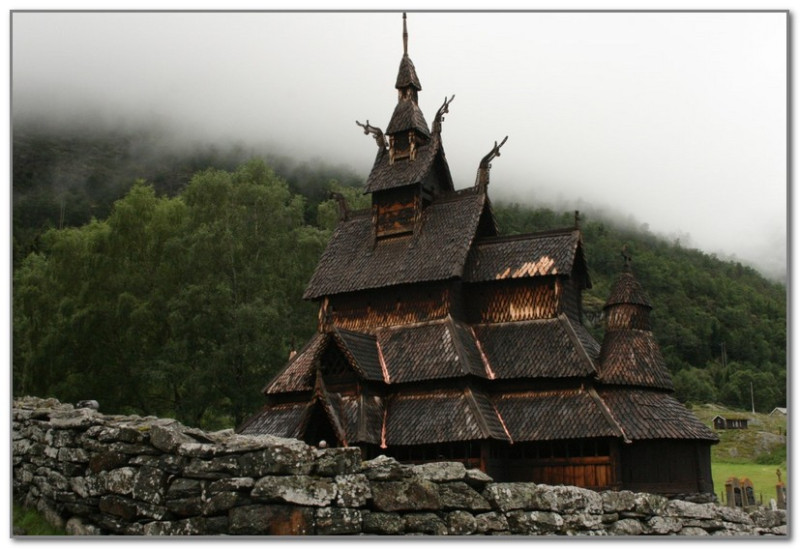 Otherwise, the church in Borgunn meets the canons of Christian religious architecture and is a traditional basilica with an apse in the eastern, altar part. All barriers on the choir are made in the form of oblique crosses – the symbols of St. Andrew. 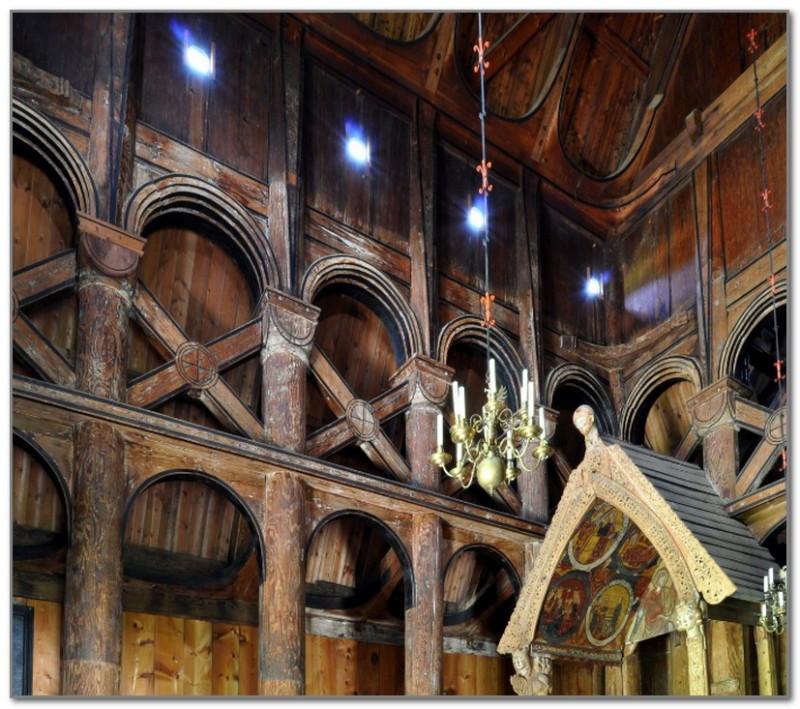 Interior of Stavka is extremely simple and laconic. There are no excesses here, all the decor of the temple is a modest altar of the XVII century, an ancient reliquary cabinet and roughly made benches for worshippers. In the seventeenth century, when the Reformation triumphed over Catholicism throughout Norway, this Spartan setting made it easy to turn a Catholic church into a Protestant one. 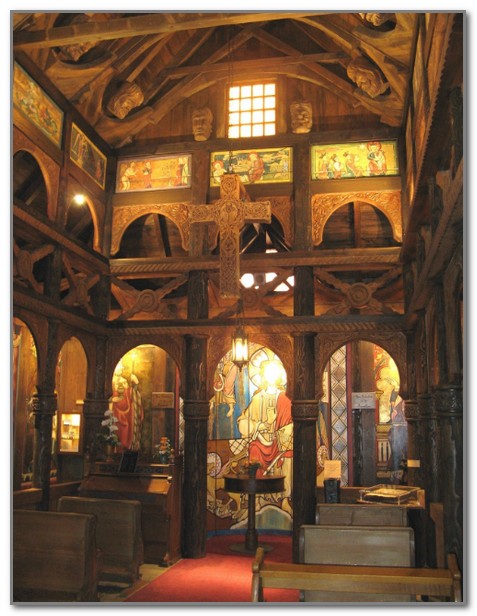 Today the Stavkirk is part of an entire temple complex. The fact is that in order to preserve the ancient monument, divine services in it were discontinued in the middle of the XIX century. The entire congregation of the old Stavkirka was moved to a new temple that was built nearby. The new church looked very much like the old one, so the parishioners almost didn’t feel the difference, and the ancient Stavkirka got a chance to live longer.

In addition to the two stakes, there is a recently restored 13th century bell tower. And a tiny ancient cemetery. 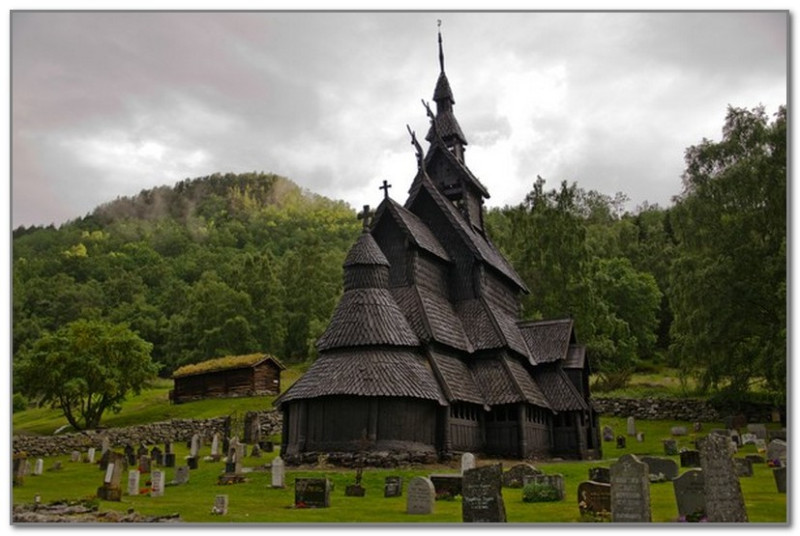 Next to the religious buildings there is a tourist center, quite a good restaurant and souvenir store. In Stavkerka today unfolds an exhibition that tells about the daily life of the Vikings.

There is another attraction here – the ancient royal road, which played an important role in the Middle Ages, and today is a great route for hiking or biking. 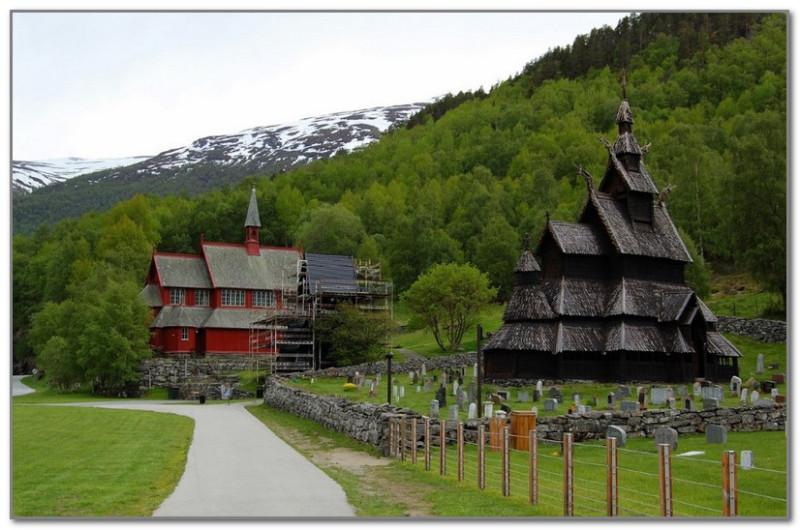 Unlike most Norwegian stakes, which unfortunately have not stood the test of time, the Stavka in Borgunn has managed to overcome all the blows of fate and weather with honor. It has not only survived, but has retained its medieval charm. It is to be hoped, that the church will live for a long time, and in time, thanks to the development of technology, restorers will find a way to return the ancient church to its former beauty and many colors. 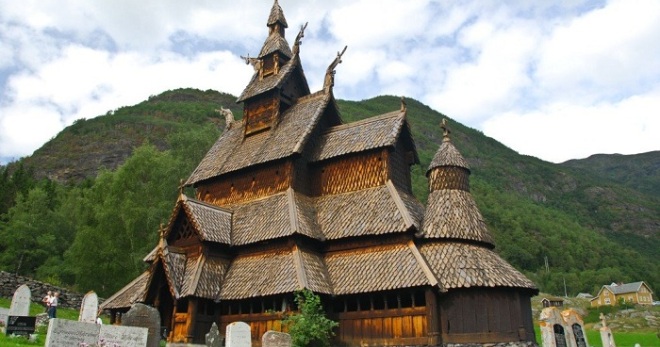 Among the many religions we will always recognize the golden domes of Orthodoxy, we will admire the Buddhist stupas and even in remote villages we hear the long call of the minaret. But in Scandinavia it is customary to build mast wooden churches – starkas – a unique version of the Christian temple. It is a kind of special and ancient art. One of the oldest mast churches is in Norway.

READ
7 places to visit in Cyprus

Getting to know Borgund Church

Borgund Church is located in Norway in the province of Sogn og Fjuran north of the capital, Oslo. The religious structure is known as Stavkirka in Borgund (Borgunn). Historians believe that it is one of the few ancient frame-type churches that has survived to this day. Archaeological excavations have shown that such mast structures on the territory of modern Norway was built a little more than 1500. But in varying degrees of safety until the XXI century survived only 28 such structures. 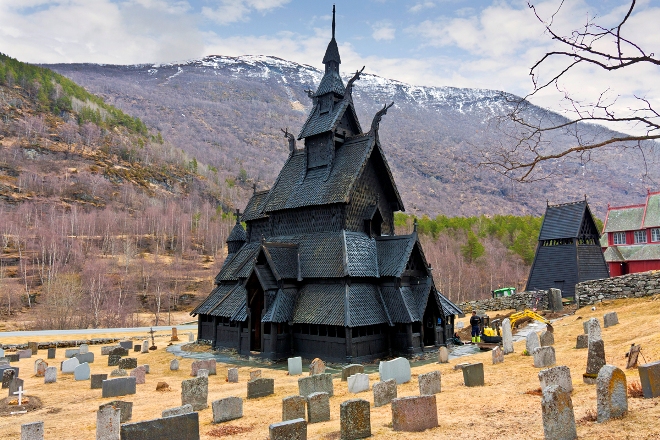 Today the church Borgund is a whole architectural complex. In addition to the ancient structure, it includes:

Archaeologists believe that Borgund Church in Norway was built on the site of an even older religious building. Its features were found during excavations under the floor. Borgund Stavka is also unique in that it is one of the few buildings erected at a time of major changes in Norwegian history and at the same time of the bubonic plague that raged in the country. 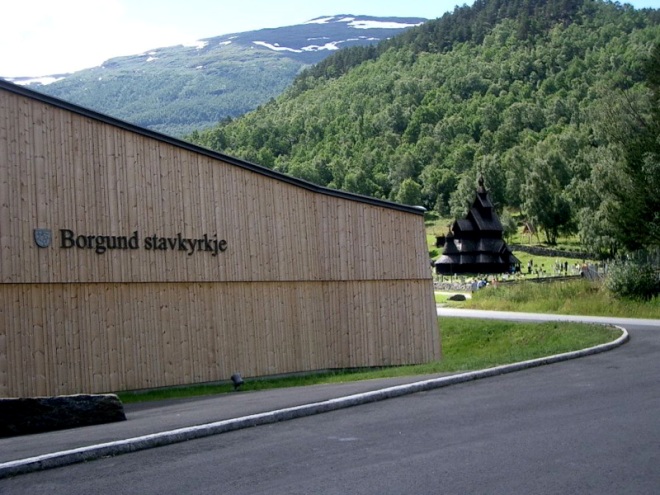 Evidence of this includes the ancient graves of soldiers who died in the civil war of the period 1177-1184. Since 1877, the entire complex has belonged to the Society for the Preservation of Ancient Monuments of Norway. There is a museum in Borgund Stark, which tells about Medieval Norway and frame churches. 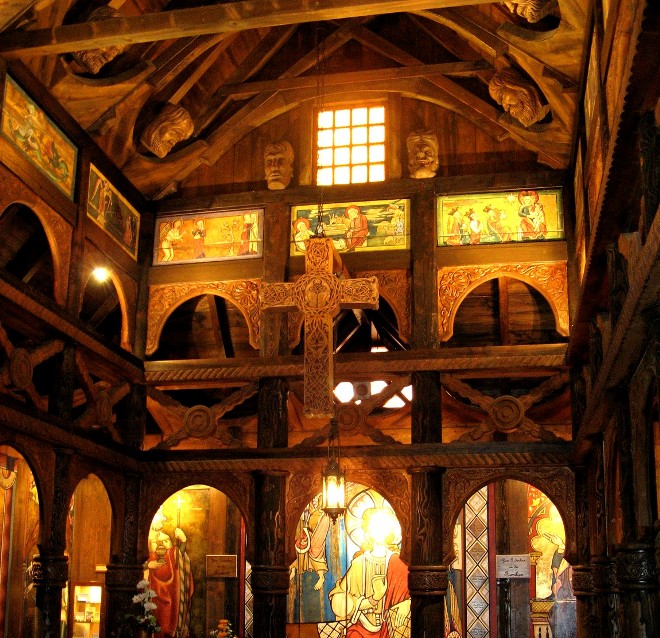 Very interesting facts about the temple, which will tell the staff of the museum, are the following:

Technology of the construction of the church

When studying the materials and aspects of the architecture of Borgund Church in Norway, some technological features of its construction were revealed:

How to get to the church?

It is more convenient to get to Stavkirke by bus from Oslo, your stop is Borgund stavkirke. Highway 630 Oslo-Lerdal passes by the church, take the turn to Borgund 25 km from Lerdal. Travelling on your own in Norway, navigate to the coordinates: 61.047297, 7.812191.

Lovers of walking and biking are recommended to walk along the historic royal road Vindhellavegen. It is no longer passable and is more like a trail, which begins at the threshold of Borgund Church. The walking time is about 1.5 hours both ways.