Mafia Island is the largest of the many inhabited and uninhabited islands of the eponymous archipelago. It is located 40 kilometers off the coast of Tanzania and 160 kilometers from the island of Ugunja (Zanzibar). Tourist infrastructure here is still under development, there are not many hotels, and many beaches are still deserted. They say that Mafia Island is very similar to Zanzibar thirty years ago. Perhaps this is one of the reasons why the British newspaper “Sunday Times” named Mafia one of the ten most mysterious islands. But this does not prevent numerous tourists to come here all year round to join the unspoiled nature, relax on one of the best beaches, go fishing or do water sports. And for divers, Mafia Island is a magical land: its reefs are known as the world’s best places for deep-sea diving.

In half an hour a small plane from Dar es Salaam International Airport will take you to Mafia, from a bird’s eye view the island looks like a horseshoe. You can also get here from the Tanzanian coast by speedboat, and those who prefer a leisurely boat trip can reach the island within an hour and a half by rented boat from Dar es Salaam or the island of Zanzibar. Mafia’s nature is considered unspoiled and there are no cabs or buses. Locals can ferry you from one part of the island to another in traditional dhow boats. Another way to get around the island is to rent a jeep or, more popularly, a bicycle.

And now you are plunged into a leisurely holiday: a fabulous island welcomes you to an unusually clear waters of the Indian Ocean, coconut palms along the white-sand beaches, light breezes, the inexpressible beauty of coral reefs and a variety of underwater fauna.

The history of Mafia began more than two thousand years ago. Before the arrival of Europeans, the island was called Chole Chamba. There are two versions of the origin of the new “name” – according to one of them, Mafia so called from the Arabic morfiyeh, which means “archipelago, group. The other version is associated with the ancient Swahili language, from which “mahali pa afia” translates as “healing land. And indeed, rest on the island can truly be considered healing.

READ
A guide to Japan's beaches

During the excavations of the mosque in Ras Kisimani, the remains of Chinese pottery dating back to the 8th century were found. This fact indicates that at that time Mafia Island was already one of the key trading hubs where merchants from the Far East came. Since the XII century, the island became the center of Shirazi culture, whose history finally ended in the 20s of the XIX century, when the town of Kua Juani Island was attacked by the cannibals of Sakalava from Madagascar.

In 1890, Mafia Island became German territory, and the ruins of the German ruler’s house remain to this day on the island of Chole. During World War I, there was a British military base on the island.

Today, the local population lives on fishing, coconut plantations and tourism. It is interesting to observe the measured village life and life of Tanzanians, the work of craftsmen and boat builders. Wooden figurines, souvenirs made of stones and corals are made right before your eyes, still make a rope by hand of coconut fiber, carved a traditional boat dhow, make the sails.

Holidays on the island of Mafia is considered the world’s ideal for a variety of water sports: above all, diving and deep-sea fishing, canoeing, boat trips. The coast of the island is perfect for this, with its many secluded bays, beautiful scenery of small coastal islands, stunning coral reefs and an amazing variety of underwater world! Add to that the unique safari through virgin rainforest, where the branches of the mangroves are home to many exotic birds, and in the bushes and sometimes the ruins of the ancient Arabian settlements.

In 1994, on the southern coast of the island of Mafia was founded a beautiful Marine Reserve. Along its coastline, you’ll find mangroves, coral gardens with more than 50 species of coral and 400 species of tropical fish: clownfish, tuna, butterfly fish, rainbow fish, sharks, sea turtles, and many other mundane creatures. The sanctuary, dubbed the Mafia Island Seaman’s Park, is home to a diving school and courses, as it is one of the most beautiful places to dive. The marine reserve includes the bay Chloe Bay, at the entrance of which experienced divers love the so-called “Kinasi Passage” – a wall with caves, descending to a depth of about 30 meters.

Here when diving you can meet the amazing rare fish, such as potato cod, morays, giant grouper, barracuda, cobia. Another popular diving spot is Chole Bay, but at low tide visibility is not very good. Not far from the bay – a few hotel complexes and apartments, the owners of which cut down some of the mangroves, turning the coast into a beautiful sandy beaches.

The diversity of fish on the coast of the island attracts tourists here also for fishing. The fishing season lasts from August to March, but in the reef zone and straits, the catch is guaranteed all year round. You will be pleased with your ample trophies, which may include barracuda, kingfish, sailfish, tuna, marlin, shark, flying fish, huge cod and mackerel. After enjoying the richness of coastal waters, you can go on one of the excursions. The island of Chole attracts the attention of tourists, above all. It began to dominate after the looting of the Madagascar cannibals Kua. Now the island has preserved the traditional way of life and culture of the local population. You can observe the village traditions, as well as walk through groves of fruit trees and among thickets of baobabs. Chole Island is home to the unique giant fruit-eating Pteropus bats and has roosts everywhere.

On Juanji Island, you can watch turtles nesting on the beaches. And hiking will surprise you with the beauty of ancient coral pools. The Kua Canal, which stretches inland from Chole Bay, is a great place to swim, relax on secluded beaches, and watch birds.

On the island of Jibondo, local artisans make traditional dhows right on the coast and fishermen hunt sharks.

Dindini Beach is only accessible at high tide and offers diving and picnics with beautiful scenery.

On the island of Mafia, tourists are offered to see the ruins around Chole, in particular – built by settlers from Kilwa mosque of the XII century. It is also interesting to see the ruins of the ancient city of Kua. In the village of Kirongwe, pottery masters work in a traditional manner.

The locals are ready to offer you a variety of seafood: fishing boats now and then brought to the shore of lobster, crabs, fish, which are prepared right there and seasoned with traditional local spices.

Holidays on the island of Mafia – a unique opportunity to combine solitude and water sports, to touch the identity of the local population and join the culture of Kiswahili, to wander through untouched lush forests and plunge into the incredibly rich waters of the Indian Ocean!

Mafia Island is located in Tanzania, 40 km from the mainland. It is not large: the area of the island is only 435 sq. km. Live on Mafia about 50 thousand people. They are engaged mostly in fishing and work on coconut plantations. A large part of the population is also employed in the service of tourists.

The climate on the island is tropical monsoon. Twice a year, the rainy season is longer in spring (late March to late May) and shorter in late fall (November and early December). The air temperature is within +28 ° … +30 ° C, the water temperature is +24 ° … +26 ° C almost all year round.

The name of the island comes from the words mahali pa afia, which in Swahili means “healing land”. There is another version of the origin of the name – from the Arabic word morfieh, which translates as “archipelago”. Mafia is indeed the main island of the archipelago, which includes several smaller islands: Chole, Juani, Jibondo and others (incidentally, the island itself before the “discovery” by Europeans called “Chole Shamba”).

The island of Mafia has a very rich history. In the VIII century it was one of the most important commercial hubs, which carried out trade, including with the countries of the Far East. This is evidenced by the remains of Chinese pottery found during the excavation of the mosque in Ras Kisimani. In the XII century the island becomes the center of Shirazi culture.

Today it is just a very popular tourist island, which attracts a large number of visitors every year with its crystal clear waters, snow-white sand, coconut palms and stunning underwater reefs. In addition, the island of Mafia is a marine reserve of world significance. Not for nothing, those who have been here and who could not help but fall in love with its beauty, founded the Mafia Island club, where they share their impressions of visiting the island. 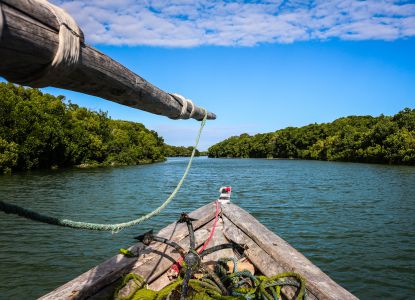 If you are going to visit Mafia Island in Tanzania, try to visit a few islands in the archipelago: the island of Djibondo is famous for the village of the same name, where you can watch the construction of boats, or rather their chiseling, as well as sewing sails. There are also shark hunters in the village. On the beaches of Juani Island are nesting turtles. You can also see the ruins of the city of Kua. And Chole Island is famous for its baobab forests and orchards. It is home to giant bats.

Mafia Island, as well as other islands of the archipelago, is coral. For beach lovers, this means that the sand here is white. The coast has many secluded bays. The best beach of the island is located near the bay Chole – and very close to the most popular hotels and lodges.

Mafia Island also attracts fans of fishing. Tuna, sailfish, flying fish, barracuda, marlin, lucian, mackerel, cod and even shark are caught here. If you want to take part in exciting fishing – the island is best visited between September and March. In the hotels you can rent equipment for diving, snorkeling and other water sports. Also popular with tourists are canoeing trips.

Mafia Island is not too big, but it offers a variety of lodging options – lodges, hotels, guest houses, and bed and breakfasts. The best of the hotels on the island is Big Blue Mafia Island diving resort, which earned a rating of “excellent” from its guests. The Meremeta Lodge and Kinasi Lodge, Pole Pole Bungalows and Didimiza Guest House also received very good reviews. The best place to eat is in the restaurants at the hotels, which serve delicious national cuisine.

Traditional souvenirs from the island – figurines of wood, as well as products of coral and semi-precious stones. They can be purchased in souvenir shops at hotels, as well as on visits to local villages. There you can also watch the process of making these souvenirs.

How to get to the island?

The island has only one type of “public transport” – boats “dhows”. Moving around the island you can either take a cab or rent a car, and given the small size of the island, many tourists prefer to ride bicycles, which can be rented directly in the hotels, the rental cost – about $ 12 dollars a day.