The most romantic places in Bologna, Italy

Among the many places that Bologna offers couples, we have chosen the most romantic . There are some that are truly special and unforgettable, but even the simplest offerings are no exception. For example, you can experience the thrill of a hot air balloon flight, which you can fly over the beautiful Romagna countryside, or take a comfortable walk through the picturesque squares. In the evening you can have a candlelit dinner in a cozy corner of the city. Our suggestions will help you discover the most romantic spots in this charming city, find the right atmosphere.

1. Hot air balloon flight in the skies of Emilia Romagna

Admire the beauty of the Emilia countryside by flying over it in a hot air balloon. Every year in September, the skies of Ferrara are colored for one of the most important balloon festivals in Europe. Nevertheless, balloon flights are offered privately all year round. Take advantage of the opportunity to fly about half a kilometer over landscapes dotted with castles and vineyards. There are plenty of offers in Ferrara for accommodations.

Piazza Maggiore, surrounded by the most important buildings of the city, can be a very romantic place . Allow yourself to submit to the majestic beauty of the Basilica of San Petronio, the Palazzo dei Banchi and the Fountain of Neptune. Then enter the Salaborsa Library, located on the first floor of the Palazzo d’Accursio, and admire the Roman remains through the specially made glass floor. If, on the other hand, you want to entrust the mystery to your lover, walk up to the portico of the Palazzo del Podesta and stop at one of the four corners of the vault, facing the column. The peculiar shape of the vault creates a curious acoustic effect so that the person next to the opposite column can hear what you are saying, even if you are speaking in a whisper.

READ
Top 10 Best Places to Raft in the USA 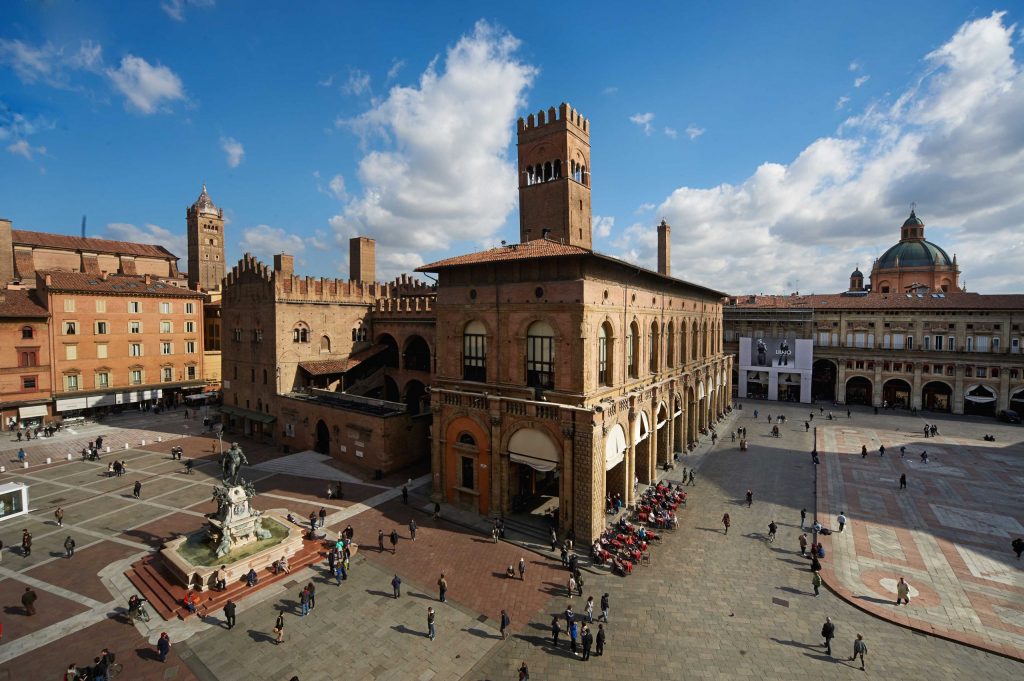 3. The two towers of Bologna: a romantic symbol of the city

Known as the “two towers”, they are considered a symbol of the city . They are strategically located at the entrance of the ancient Via Emilia and are the most famous of the few towers left in a city that once numbered about a hundred. Torre della Garisenda, the lower of the two, was built by the rich Garisendi family and was later reduced by 12 meters due to structural damage. The Tower of the Asinelli can still be visited and offers a spectacular view of the city. According to a romantic legend, the tower was built by a young man of ignorant origin as a condition set by the rich father of his lover to get the girl’s hand. 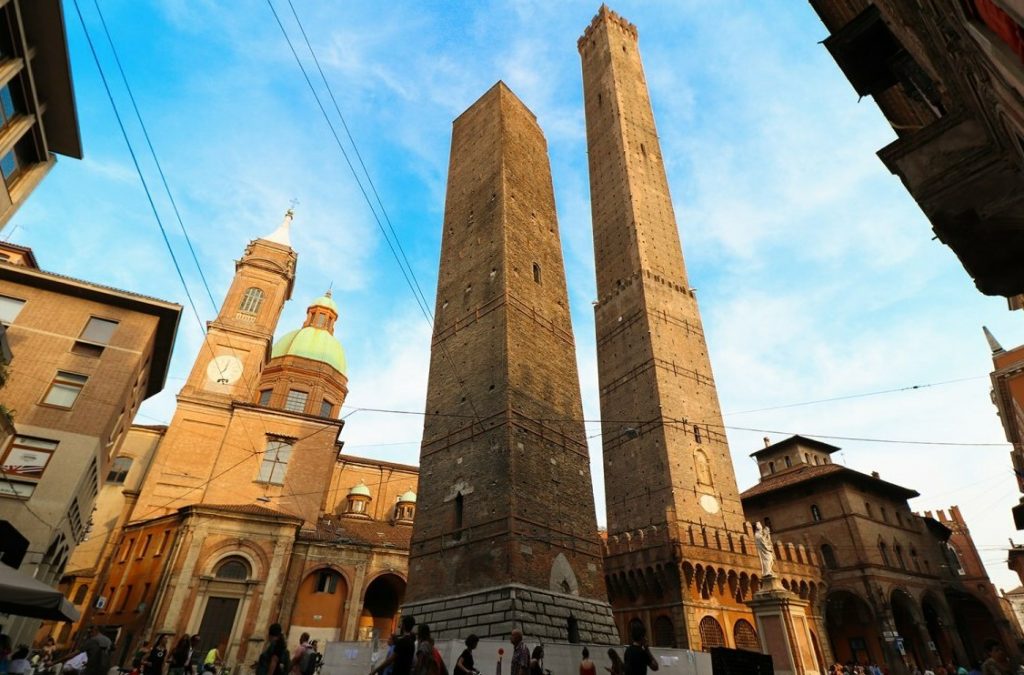 3. The two towers of Bologna: a romantic symbol of the city

After a romantic stroll through Piazza Maggiore, visit the imposing Gothic-style basilica that occupies the southern end of the square. The façade, which remains unfinished, boasts an ornate marble lower part and a brick upper part. Inside the church are magnificent frescoes, large polychrome windows and ornate chapels. During your visit, be sure to pay attention to the 67-meter sundial inscribed on the marble floor and attributed to the famous astronomer Giovanni Domenico Cassini. If you wish, you can spend the night in one of the hotels near the basilica. 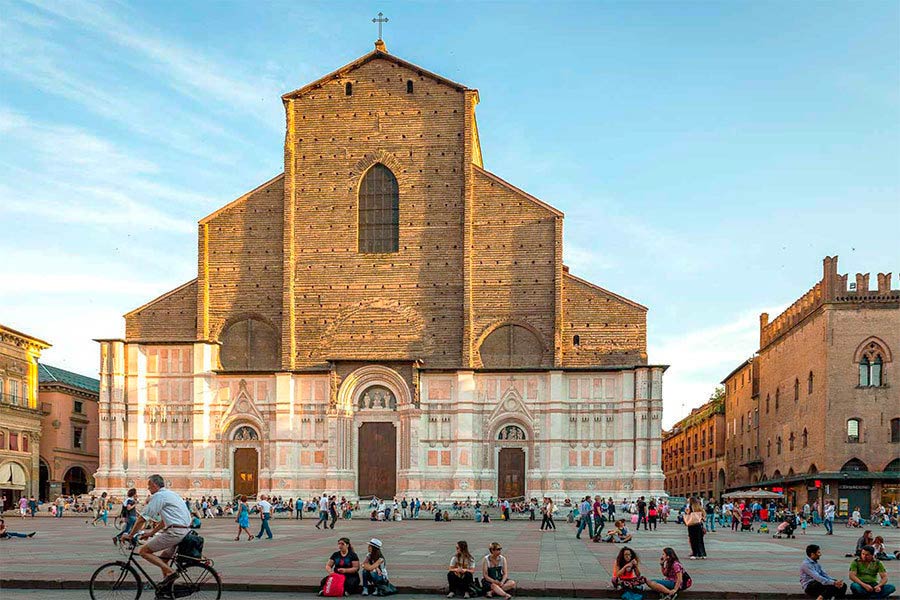 5. San Luca Portico: a picturesque walk under the longest portico in the world

According to an old superstition, unmarried couples who travel the entire route, always staying under the porch, are destined to be together, the walk leading to the San Luca Sanctuary is one of the most romantic paths imaginable. The porch, which climbs gently up the hill, loops for nearly four kilometers and is the longest in the world. Built to shelter pilgrims from the rain in bad weather, it offers a pleasant shade, even in summer, and the opportunity to admire the 15 chapels along the route and the beautiful scenery. Some of the most beautiful hotels in Bologna are located around the portico of San Luca. 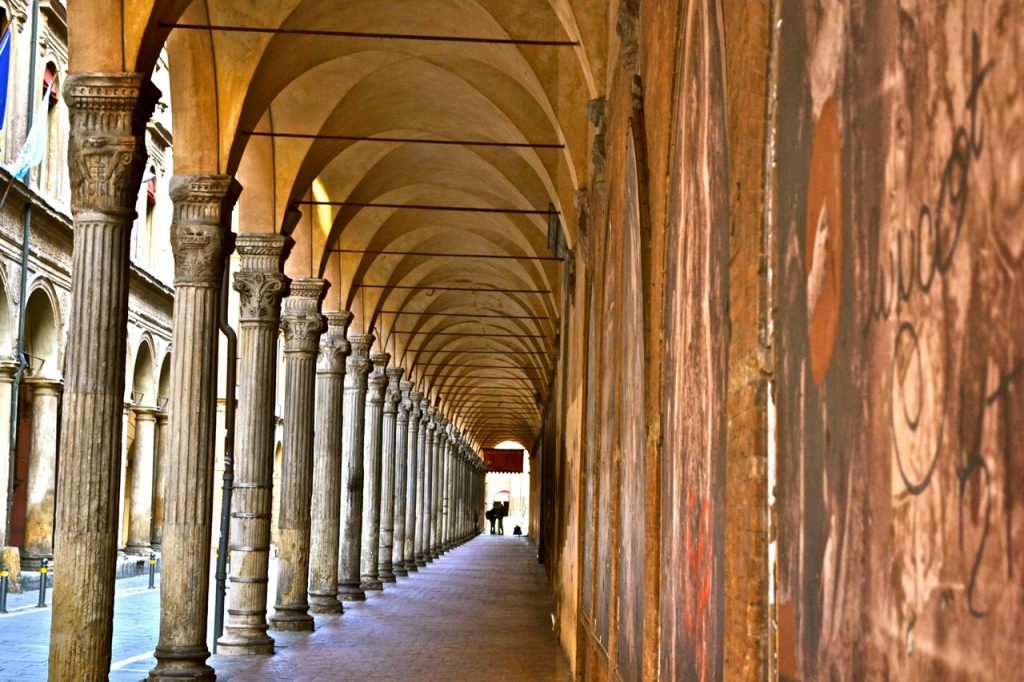 5. San Luca Portico: a picturesque walk under the longest portico in the world

6. Discover the medieval villages around Bologna

Bologna is surrounded by beautiful towns and romantic medieval villages that are perfect for a walk for two. Less than an hour from the capital of Emilia is Dozza, a characteristic medieval village known both for its castle and the beauty of the surrounding landscape. Another popular tourist destination is Castel Arcuato, also from the Middle Ages and full of beautifully preserved buildings. Finally, about an hour southeast of Bologna is San Leo, perched on a spur of rock, where you can see San Marino and Valmarecchia. High-level lodging can be found in the village of Dozza. 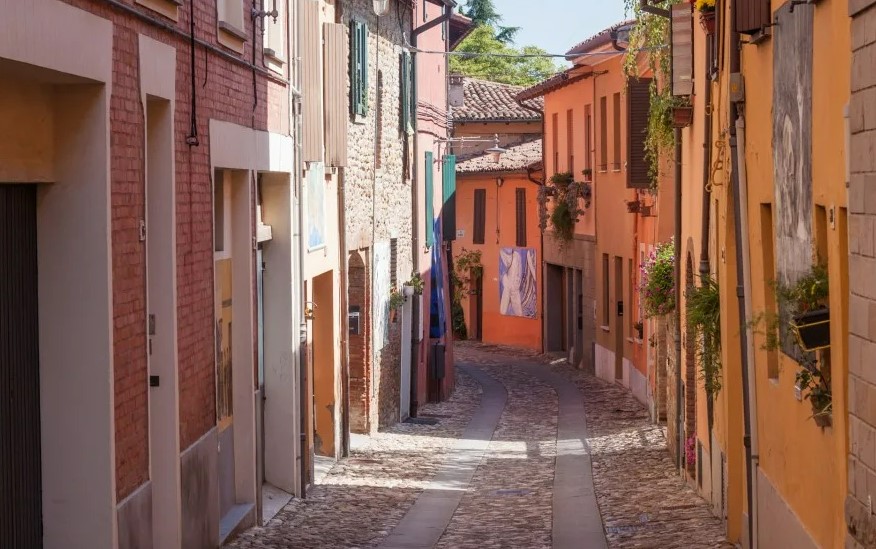 6. Discover the medieval villages around Bologna

7. Piazza Santo Stefano: an evening stroll through one of the most memorable views of the city

If the imposing Piazza Maggiore hosts during the day, we recommend the more intimate Piazza Santo Stefano for a walk hand in hand at sunset. In the evening, the buildings surrounding this charming corner of Bologna, including the Basilica delle Sette Chiese and Corte Isolani, are illuminated by soft light, creating a magical atmosphere . For a better view, take a stroll around the neighboring porch. You can easily find accommodations in the Santo Stefano area. 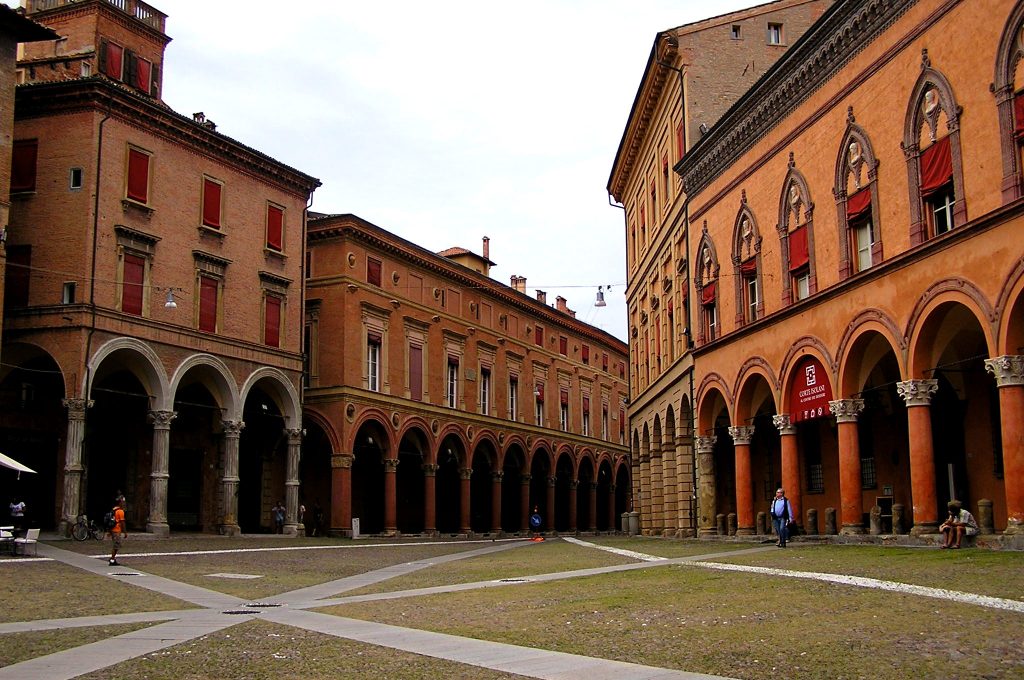 7. Piazza Santo Stefano: an evening stroll through one of the most memorable views of the city

8. See an art house movie at Rialto Studio: A movie theater with an intimate atmosphere in the heart of the city

In a historic building on the Via Rialto, this cinema offers not only Hollywood blockbusters, but also art house and independent films: the ideal place for an evening of old-fashioned romance. The theater has two auditoriums and a bar. 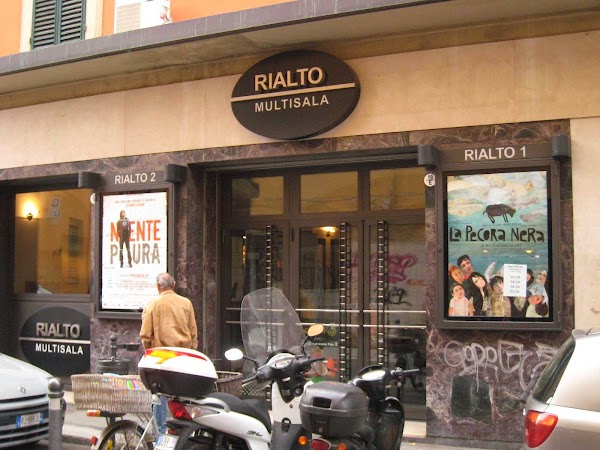 8. See an art house movie at Rialto Studio: A movie theater with an intimate atmosphere in the heart of the city

9. Dine by candlelight at Al Sangiovese: fine cuisine in an intimate atmosphere

Small and intimate, this family-run restaurant is the ideal place to spend a romantic evening and enjoy a traditional Bolognese meal. Located in Vicolo del Falcone, it features an intimate atmosphere, soft lighting and wooden furniture. In addition to traditional dishes, including tagliatelle al ragu and risotto with red wine, the restaurant offers a seasonal menu. Given its small size and popularity, we recommend reservations.

10. Opera at the Municipal Theater: beautiful interiors and impeccable acoustics

Not far from Piazza Maggiore is the opera house of Bologna, known as Teatro Comunale. The interior is richly decorated, and many of the boxes still have original decorations from the 18th and 19th centuries. 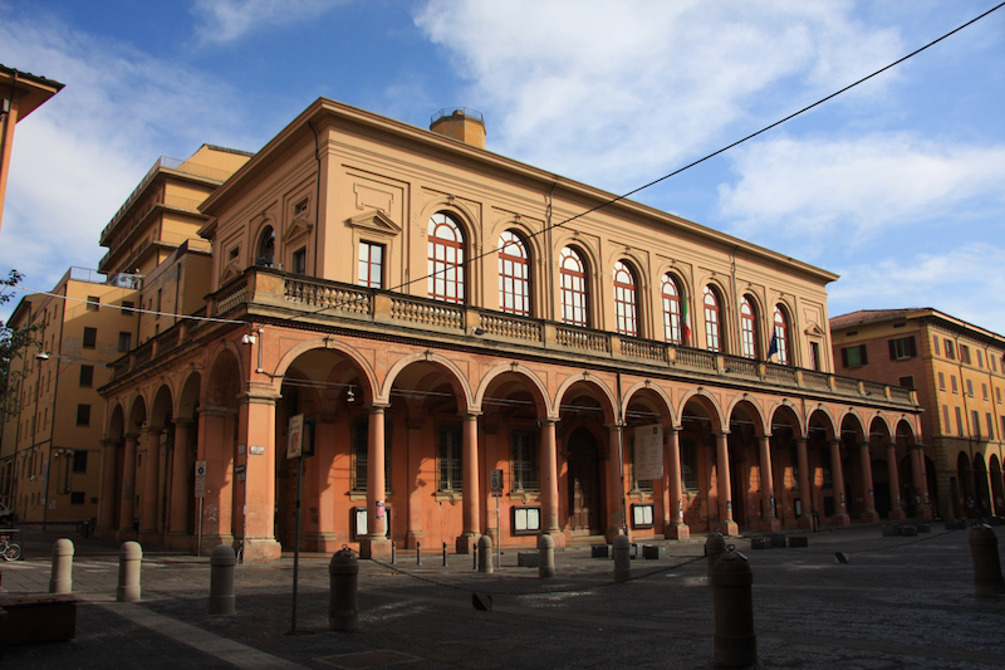 10. Opera at the Municipal Theater: beautiful interiors and impeccable acoustics

The program is very varied and ranges from interpretations of Leonard Bernstein’s musical West Side Story to performances of Swan Lake and performances by the choral school of the same theater. After the show, we recommend going up to the terrace, which offers a romantic view of Verdi Square.