Turkey, a country of beautiful monuments, historic cities, unique nature and a magical coast with great beaches. Right on the coast there are hundreds of lively resorts where you can have a great vacation. In terms of tourists who want to spend their summer vacation by the sea in the country, Turkey can be divided into two parts, the Turkish Riviera and the Aegean Riviera.

These are the areas of most interest to foreign visitors and are some of the most visited corners of the country. Both Turkish and Aegean Riviera offer the ideal conditions for a relaxing holiday, sun, sea, beaches and quality hotel services. Resorts located in these areas are among the places where thousands of foreign tourists rest every year.

Alanya on the shores of the Mediterranean Sea

One of the most popular resorts on the Turkish Riviera is Alanya. It has a population of about 100,000 people, but during the main tourist season the number of walkers in the city increases several times. The city is located on a peninsula jutting out into the Mediterranean Sea. Due to this strategic location, Alanya has long been an important center of . This resort now offers historical monuments, natural attractions and just a lively city. 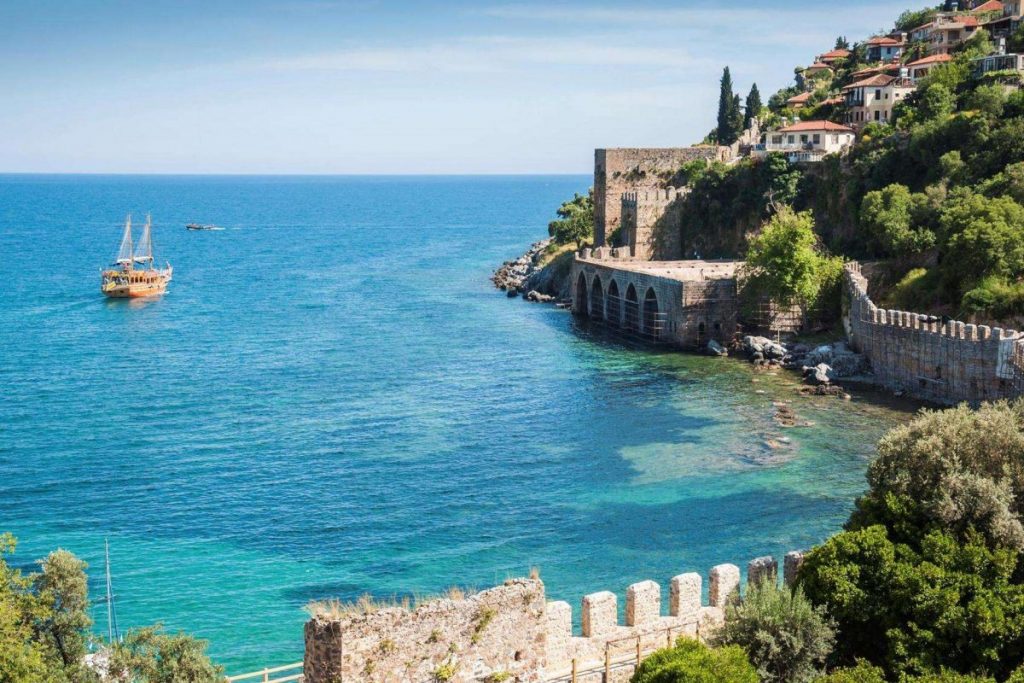 Alanya on the shores of the Mediterranean Sea

It boasts two main beaches separated by a cliff on which a massive medieval fortress has grown. Keikubat Beach stretches to the east and Cleopatra Beach, which has been awarded the EU Blue Flag and is considered one of the most beautiful beaches in the world, stretches to the west. The pleasant Mediterranean climate is another reason why Alanya is so popular and accounts for 9% of Turkey’s tourism industry.

The largest resort on the Turkish Riviera, Antalya is home to more than 1 million people. Antalya was founded in the 2nd century BC by King Attalos II of Pergamon and was named in his honor Attalia. Today the city, which includes the port, is the capital of the province of the same name in Antalya. Today Antalya attracts tourists with a perfect combination of beach recreation, sightseeing, shopping and nightlife.

READ
Top 5 Restaurants with a Spectacular View of Dubai 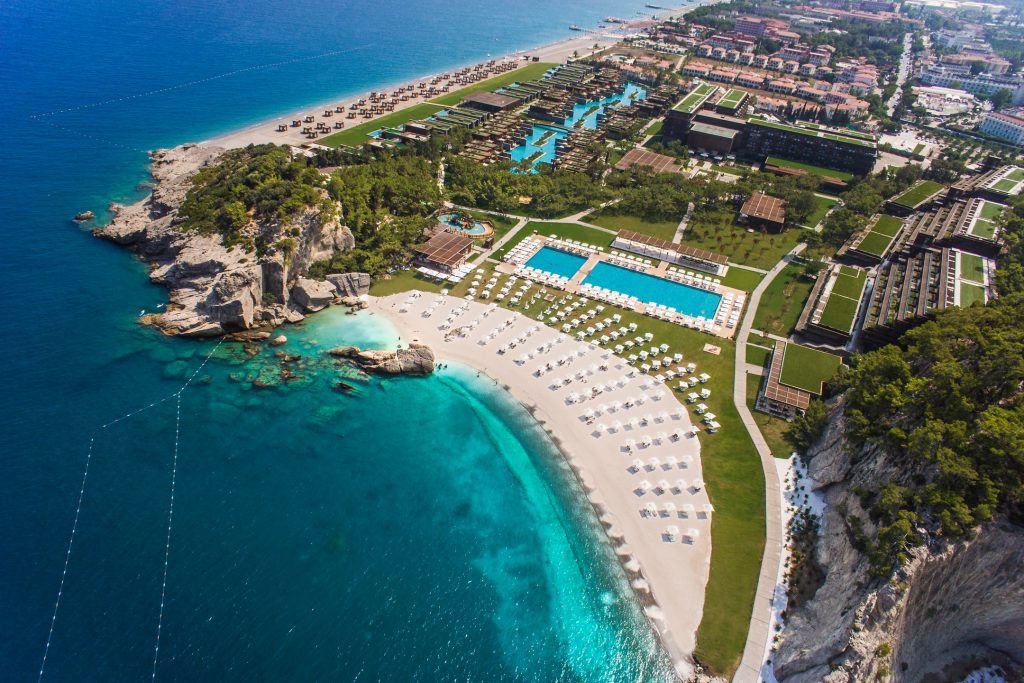 Belek on the Mediterranean Coast Belek on the Mediterranean coast

Belek, a modern resort located on the Mediterranean coast. Construction began only in the 1980s, purely for tourism purposes. Now Belek is a very attractive resort, offering luxury resorts. So, for those who want comfort and maximum convenience, and still want to fully enjoy the beautiful nature during the vacation or go sightseeing, Belek will be a good choice for him. Golf enthusiasts will also love the golf course as well.

Kemer, a resort near the Taurus Mountains

The resort of Kemer has a unique location between the Mediterranean Sea and the Taurus Mountains, which also greatly contributes to the development of tourism in Turkey. Today’s modern resort has grown from the original old village of Eski Köy, which was surrounded by a 23 kilometre long wall for flood protection in 1916-1917, after which it takes its name. 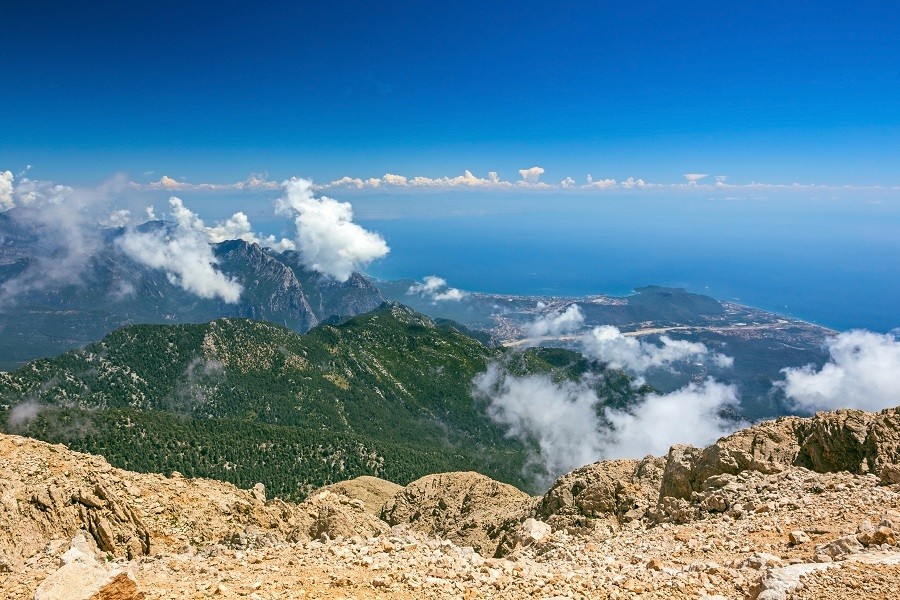 Kemer, a resort near the Taurus Mountains

Today Kemer provides a quiet and relaxing holiday, has become an important balneological center and also enchants its visitors with its unspoiled surroundings. The resort consists of large hotel complexes, and its center has stores with various goods, art galleries, restaurants, cafes, entertainment centers and bars.

The history of the now popular resort of Side, which is part of the Turkish Riviera and lies on the Mediterranean coast, goes back to antiquity. In ancient times Side was the capital of Pamphylia region. The ruins of the Roman period, the remains of the temple of Apollo and Aphrodite, the remains of ancient baths and a Christian basilica have been preserved in the town until today.

READ
Uninhabited islands in the Pacific Ocean with official status With all these unique buildings Side has become one of the most important archaeological sites in Turkey. Other beautifully preserved and highly regarded monuments include the amphitheater, which has become an integral symbol of the entire city. Side not only attracts visitors with its rich history, but also offers great vacation opportunities on the Mediterranean coast.

The Turkish port town of Bodrum, one of the largest and most visited resorts on the Aegean coast. Bodrum, formerly called Halicarnassus, is located on a rocky peninsula in southwestern Turkey, near the Greek island of Kos. The city’s rich history can be seen at every turn. After all, ancient Halicarnassus was the birthplace of King Herodotus and the final resting place of King Mausoleum II, whose mausoleum was one of the ancient Seven Wonders of the World. 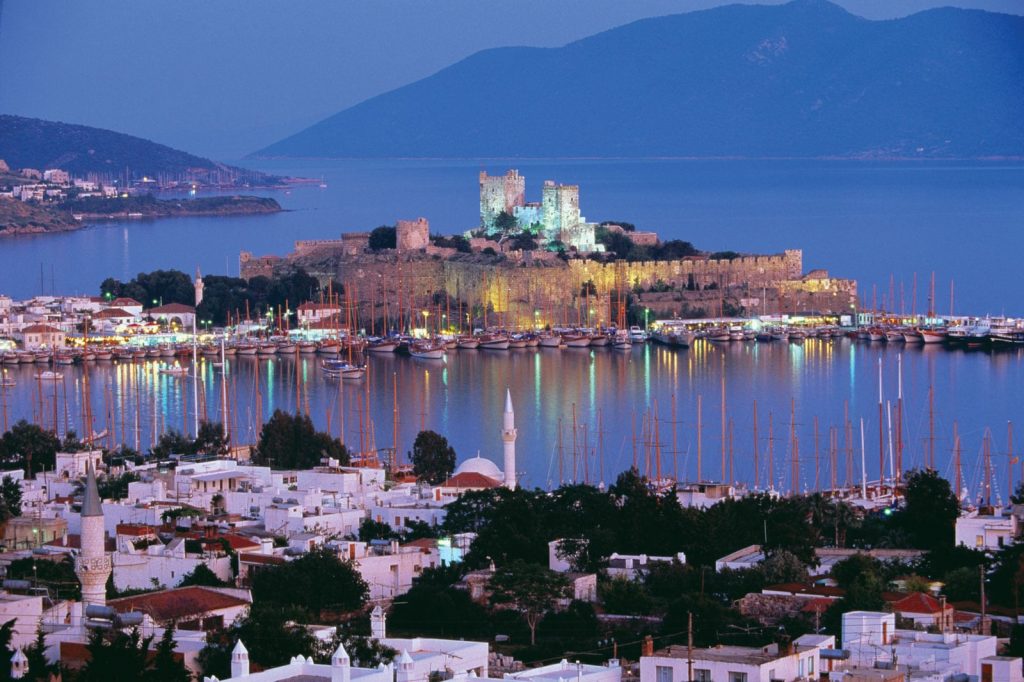 The most important monuments of the city include the medieval castle-fortress, the ruins of the ancient theater and the remains of the original fortifications. Today’s Bodrum, a relaxed and, despite its size, quiet town, is an international yachting center where windsurfers and kite surfers flock, for which the weather conditions are ideal. A promenade with stores, restaurants, bars and tavernas borders the center of the town. 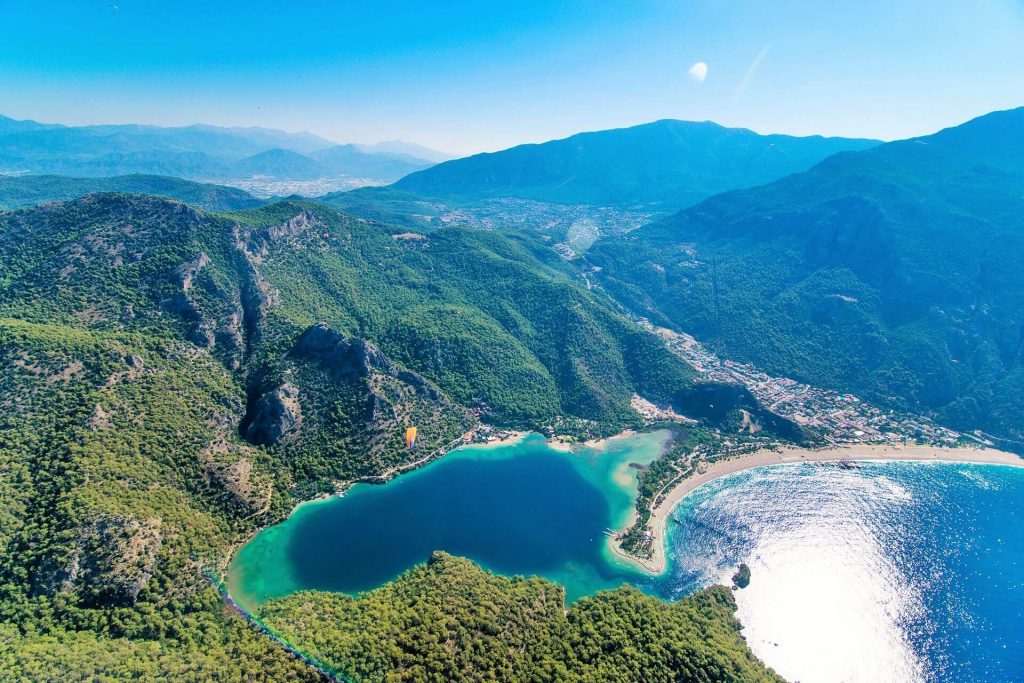 Fethiye, a small and quieter resort that is away from the main tourist flow and surrounded by unspoiled nature. It is surrounded by green pine groves and the peaks of the Taurus Mountains form a beautiful backdrop. Originally a fishing village, it has developed into a pleasant port town with 60,000 inhabitants, which offers both an old part and a modern recreation area. The tourist area consists of hotels along which a promenade runs parallel to the long sandy beach.

Izmir, one of the oldest cities in the Mediterranean, is one of the cities located on the Aegean coast. It has a population of about 2.7 million people and is the third largest city in Turkey. Since Izmir is located in the extreme west of Turkey, it is heavily influenced by Europe and European culture. 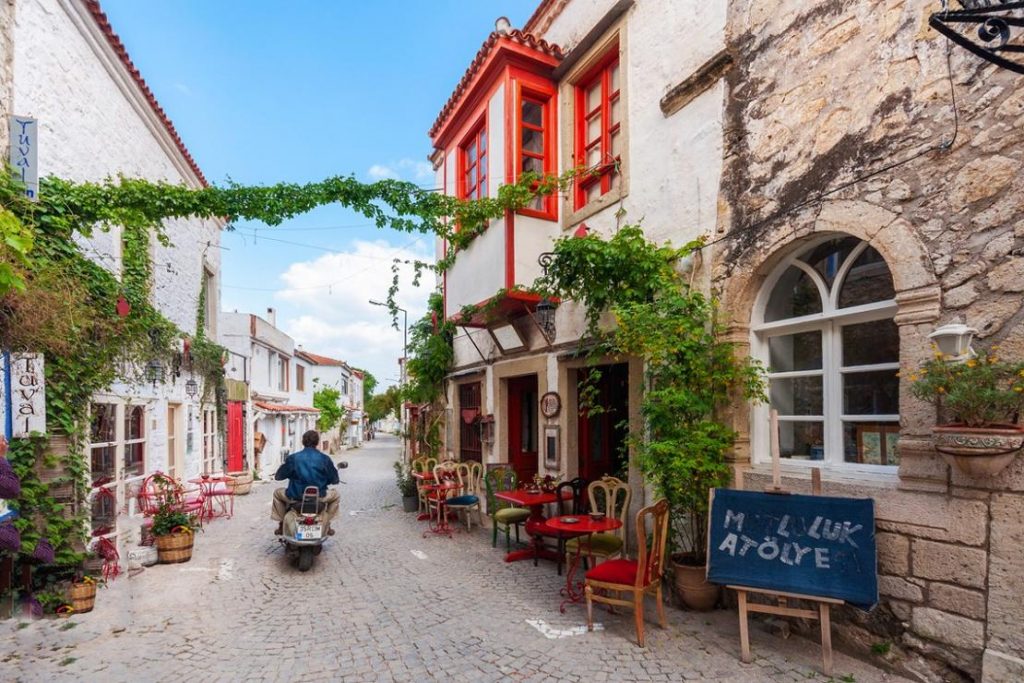 Izmir is not as popular for tourism because it becomes a day trip destination rather than a place where tourists spend an entire vacation. Nevertheless, the city hides a beautiful historical core that is definitely worth seeing and its must-see landmark is the Saat Kulesi Tower from 1901. On Mount Pagos, a large Izmir fortress, called Velvet Castle or Kadifekale, towers over the city. 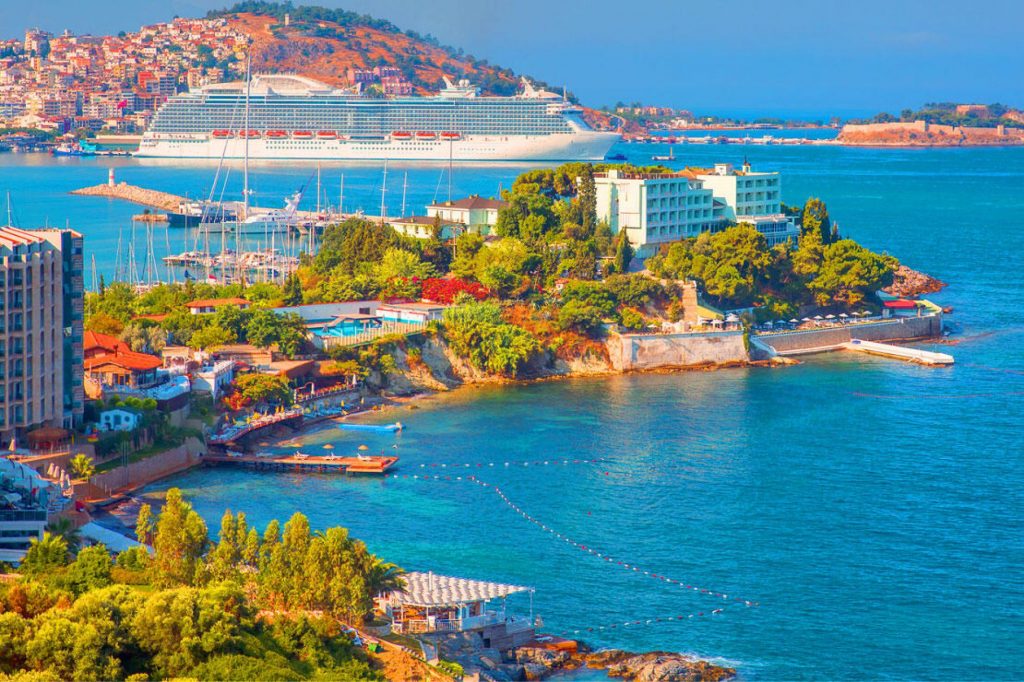 The nickname “Turkish Las Vegas” is the resort of Kusadasi, which can be found in the very north of the Aegean Riviera. It is very lively and mainly consists of casinos, bars and nightclubs. Entertainment is in full swing day and night. There are also neon lights, ubiquitous music and dancing. However, Kusadasi also boasts beautiful surroundings and well-kept beaches that attract more and more people to the resort every year. Interesting sights include the Genoese fortress built on the island of Güvercin and the Mehmet Pasha Caravanserai, which has been converted into a hotel. 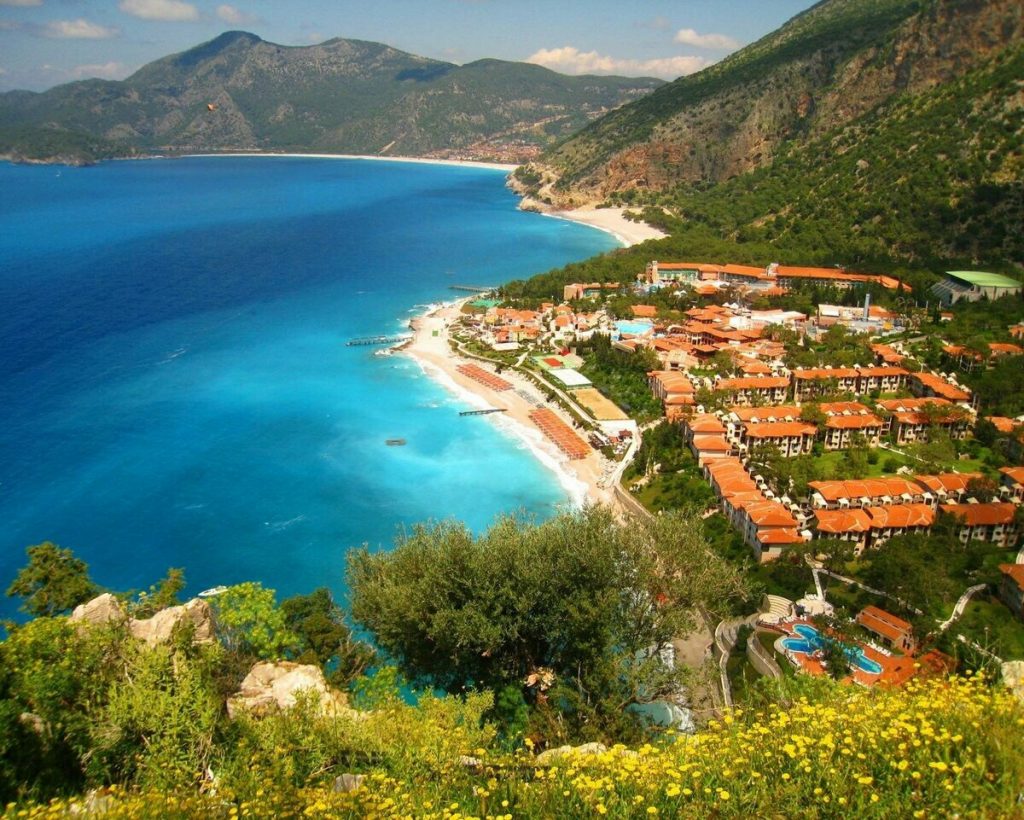 The resort with the strange name Oludeniz has become one of the most popular seaside destinations in Turkey. It is a young resort that grew up in the midst of beautiful unspoiled nature and includes a beach considered a national treasure. The local elongated tongue-shaped sandy beach consists of fine white sand and resembles the famous beaches of the Caribbean Sea.

It has been awarded the EU Blue Flag and is regularly ranked among the most beautiful beaches in the world. This sandy beach covers a narrow neck that separates a small bay from the open sea, creating a beautiful blue lagoon with calm waters. The lagoon created here is protected and contributes to the attractiveness of the resort. Unfortunately, because of all these advantages, Oludeniz is quite crowded during the main tourist season.