Cultural and Natural World Heritage Sites of UNESCO are monuments and areas (e.g. forests, mountains, lakes, monuments, cities, etc.) included in the catalog of monuments under the International Programme of the World Heritage Committee of UNESCO.

The UNESCO list consists of 911 monuments and sites that are part of the cultural and natural heritage of outstanding universal value. They include 704 cultural, 180 natural and 27 mixed sites and areas in 187 states.

The first Greek monument on the UNESCO World Cultural Heritage List in 1986 was the Epicurean Apollo. Since then another 16 sites have been added, the most recent to date being the Old Town in Corfu.

1. the Acropolis (added in 1987): The Acropolis contains four of the greatest masterpieces of the Classical Greek period: the Parthenon, the Propylaeum, the Erechtheion and the Temple of Athena Nika, which are symbols of global heritage.

2. Egon in Vergina (joined in 1996): The city of Egon is the first capital of the Kingdom of ancient Macedonia, discovered in the 19th century near Vergina in northern Greece. The most important monuments are the Palace and the Necropolis. One of the royal tombs in the Great Tomb of Egon has been identified as that of Philip II (father of Alexander of Macedon).

3. Delphi (annexed in 1987): The National Sanctuary of Delphi, home to the oracle of Apollo, considered the “navel of the earth,” was a religious center and symbol of the unity of the ancient world in the 6th century B.C.

4. Mistra (annexed in 1989): the wonder of Morea, Mistra was erected as a fortress in 1249 by King William of Achaia in Villarduen and rebuilt during the Byzantine Empire. The fortress was later conquered by the Turks and Venetians. Abandoned by the conquerors in 1832, Mistra is an amazing medieval ruin in an exceptionally beautiful location.

5. Olympia (annexed in 1989): Located in the valley of the Peloponnese, Olympia has been inhabited since prehistoric times. In the 10th century BC, it became a center of worship of Zeus. In addition to the temples, there are the ruins of all the sports facilities built for the Olympic Games, held in Olympia every four years from 776 BC.

This hotel is destined to be the perfect destination for couples in love and those spending their honeymoon. Read more

10% discount on Early Bookings, plus 5% extra discount from Grecomania

A 5-star luxury resort with villas included in the list of the Leading Hotels of the World (will open in May 2022). Read more

10% discount on Early Bookings, plus 5% extra discount from Grecomania

Up to 40% discount hotel, plus 5% extra discount from Grecomania

6. Mycenae and Tirynth (annexed 1999): The monuments of the two largest cities of the Mycenaean civilization of the eastern Mediterranean Sea from the 15th to the 12th century BC played a crucial role in the development of classical Greek culture. These two cities are associated with the Homeric epic (the Iliad and the Odyssey), and have had an enormous influence on European art and literature.

7. Delos (annexed in 1990): according to Greek mythology, Apollo was born on this small island of the Cyclades. The island attracted pilgrims from all over Greece and was a thriving commercial port. The archaeological site of Delos is exceptionally extensive and rich because in the past it was a large Mediterranean port.

8. The historic center (Chora) with the monastery of John the Theologian and the Cave of the Apocalypse on the island of Patmos (year of accession – 1999): Patmos in the Dodecanese, known as the island where John the Theologian wrote his Gospel and the Apocalypse. A monastery dedicated to the “beloved disciple” was discovered on the island in the late 10th century. The old town of Chora, associated with it, includes traditional and religious buildings.

9. Medieval town of Rhodes (year of accession – 1988): The Order of St. John of Jerusalem held Rhodes in occupation from 1309 to 1523 and turned it into a medieval fortress. Later the city fell under Italian and Turkish occupation. The Palace of the Grand Master, Hospital, Street of the Knights and the Upper Town are some of the most beautiful urban centers of the Gothic period.

10. The Monastery of Daphne, the Monastery of Osiou Louka and Nea Moni on Chios (annexed in 1990): in spite of their considerable geographical distance from each other (the first located in Attica, the second in Phokida and the third in the Aegean Sea), these three monasteries belong to the same typological series. The churches were built with a large dome supported by small arches creating an octagonal space. In the 11th and 12th centuries the churches were varied and polychromatically decorated with marble and mosaics on a gold background, the main characteristics of the “Second Byzantine Period”.

11. Old Town of Corfu (year of accession – 2007): Corfu Old Town with its two fortresses – old and new – is located at the entrance of the Adriatic Sea and has been inhabited since ancient times. Given its strategic position, Corfu was an important port which protected the island from repeated sieges and is considered one of the most important fortified cities of the Mediterranean.

A new luxurious 5-star hotel, harmoniously located in front of the beautiful sandy beach in the area of Messongi – south-east of Corfu. Read more

A luxurious luxury hotel complex. It is built on a green peninsula not far from the town. Read more

The hotel is located next to a sandy beach. The large green area, sea view, comfortable and spacious rooms. Read more

Up to 10% hotel discount, plus 5% extra discount

12. Ancient Christian and Byzantine monuments of the city of Thessaloniki (year of accession – 1988): the city of Thessaloniki, founded in 315, was one of the first centers of the spread of Christianity. Among the Christian monuments are pre-Christian temples, churches and basilicas built from the 4th to the 15th century and represent a diachronic typological series which had a great influence on the Byzantine world. The monuments included in the list are the Rotunda, the temples of Ahiropiitos and Agiu Dimitriou, the monastery of Latomou, the temple of Saint Sophia, the Cathedral of Panagia Chalkeon, the temples of Agios Panteleimon, the Holy Apostles, Saint Nicholas Orfanos, Saint Catherine and Savior Christ Pantocrator, the monastery of Vlatadon, the temple of Elias the Prophet, the Byzantine Lutra and the walls of Solun.

13. Ireon Samos (annexed in 1992): since the 3rd millennium BC, many civilizations inhabited this small island in the Aegean Sea near Asia Minor. The ruins of Pythagoras, an ancient fortified port with Greek and Roman monuments and the impressive aqueduct, as well as Ireon, the temple of Hera on Samos, are still being visited.

14. The Temple of Asclepius at Epidaurus (joined in 1988): the archaeological site of Epidaurus in the Peloponnese is on different levels. The cult of Asclepius began in the area in the 6th century B.C. The main monument, in particular, is the theater, which is considered one of the most striking masterpieces of Greek architecture dating from the 4th century B.C.

15. Temple of Apollo of Epicurus – Vasses (joined in 1986): the famous temple dedicated to the god of healing and the sun was built in the 5th century on the steep mountains of Arcadia. It is the oldest Corinthian temple ever found, and combines archaic rhythm with Doric, with some bold architectural features.

16. Meteora (year of accession – 1988): In the inaccessible area of the cliffs of Meteora, on top of the mountains, the monks built “pillars of heaven” – holy monasteries built in the 11th century. During the revival, 24 monasteries were built under extremely difficult conditions in the 15th century. The frescoes of the monasteries, which date to the 16th century, became a reference point for the development of post-Byzantine painting.

17. Hagion Oros – Mount Athos (incorporated in 1988): Mount Athos is an Orthodox spiritual center established in 1054, has been an independent “state within a state” since the Byzantine era, and is recognized as a cultural heritage area. Entrance to Mount Athos is forbidden to women. Monastic administration has influenced monasteries in other distant countries, such as Russia, and the schools of iconography and the history of Orthodox art.

Other Greek monuments that have made applications for inclusion in the UNESCO World Heritage catalog:

The most popular historical monuments in Greece

Greece is the country with the largest number of ancient monuments. The ruins of temples and palaces take tourists back to a time when civilization was just beginning and myths were a reality.

This is perhaps one of the most recognizable places on the coast of Crete. According to ancient legend, the Minotaur lived in this palace, born of a sacred bull. In order that no one could get out of the castle, there were many labyrinths. According to legend, brave Theseus destroyed the monster and was able to find his way out of the palace. Inside the palace are a large number of frescoes depicting a bull that looks intimidating. This monument is still full of mysteries beyond the control of modern man. 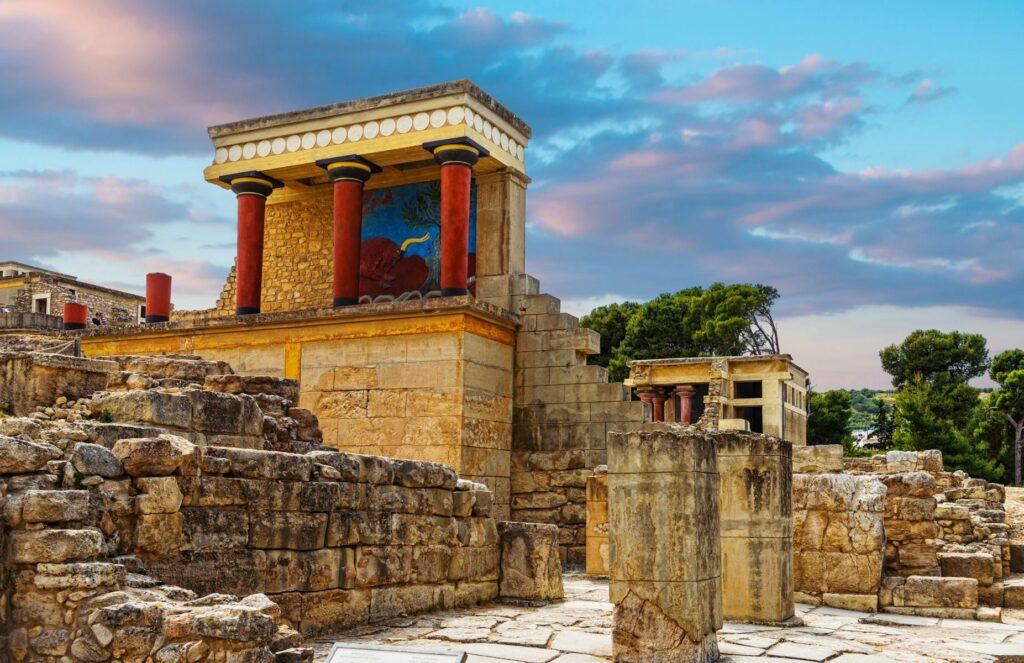 The Acropolis in Athens

This place is a valuable monument of the history of Ancient Greece. The Acropolis was built in order to protect against enemy raids. It stands on a hill whose building began as far back as 650-480 BC. In ancient Greece the Acropolis was a work of art, it was decorated with numerous sculptures . But because of natural disasters and numerous military actions in the past, the building was badly damaged and has not kept its unique beauty. Even copies of the sculptures have been bought and made, so now tourists can enjoy the beauty of the Acropolis. 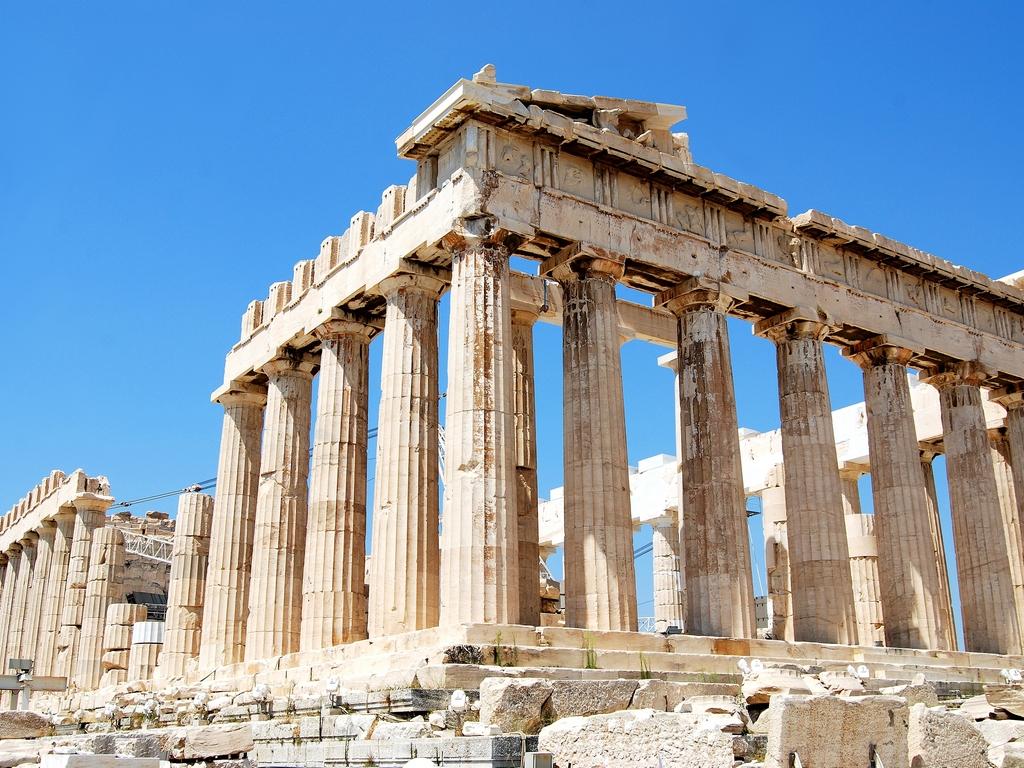 The Acropolis in Athens

The Acropolis of Rhodes

On the island of Rhodes there are ruins of the Acropolis. It is famous for its Pythian stadium, which was used in ancient Greece as a venue for athletic competitions, dedicated to Apollo. It’s a pity that only ruins remain of this beautiful building, but the Acropolis is majestic as well. Visitors to this place can enjoy the views and feel themselves as inhabitants of Ancient Hellas. 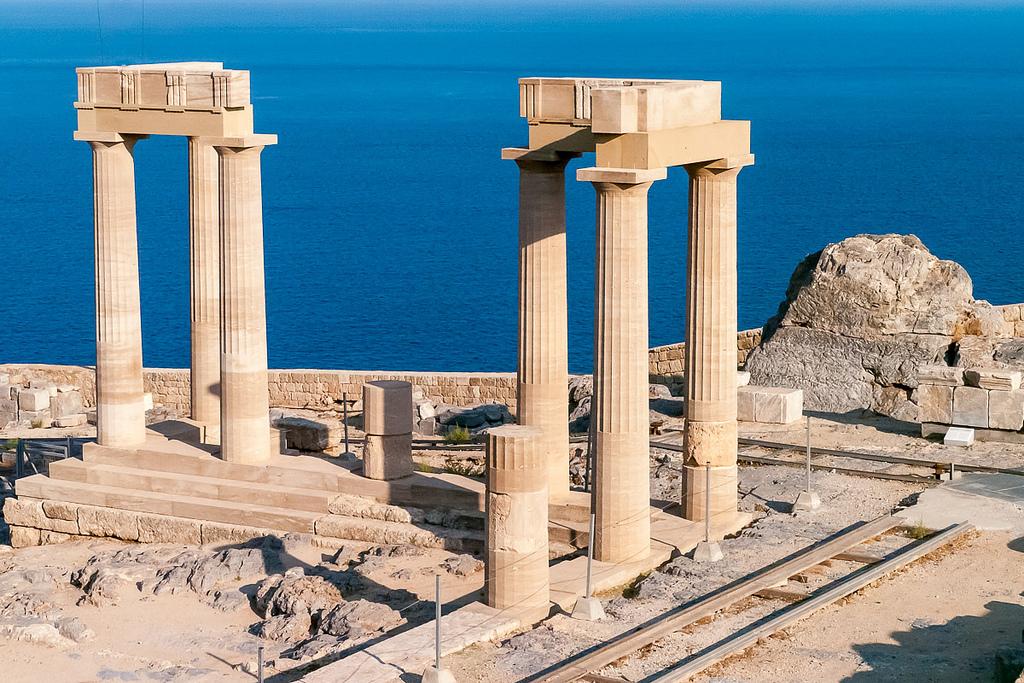 The Acropolis of Rhodes

This place is located in the Acropolis , and the theater is one of the oldest in the world. It was here that the public first heard the creations of the great ancient Greek artists Sophocles and Aeschylus. The monument of architecture dedicated to the god Dionysus, was originally built of wood. But until today, only ruins made of stone have survived. Here for a long time, for every event dedicated to the god of wine, fans of the tragic genre would gather and enjoy the performances of the actors. When the Romans took possession of Greek soil, numerous gladiatorial fights and duels were held on this site. 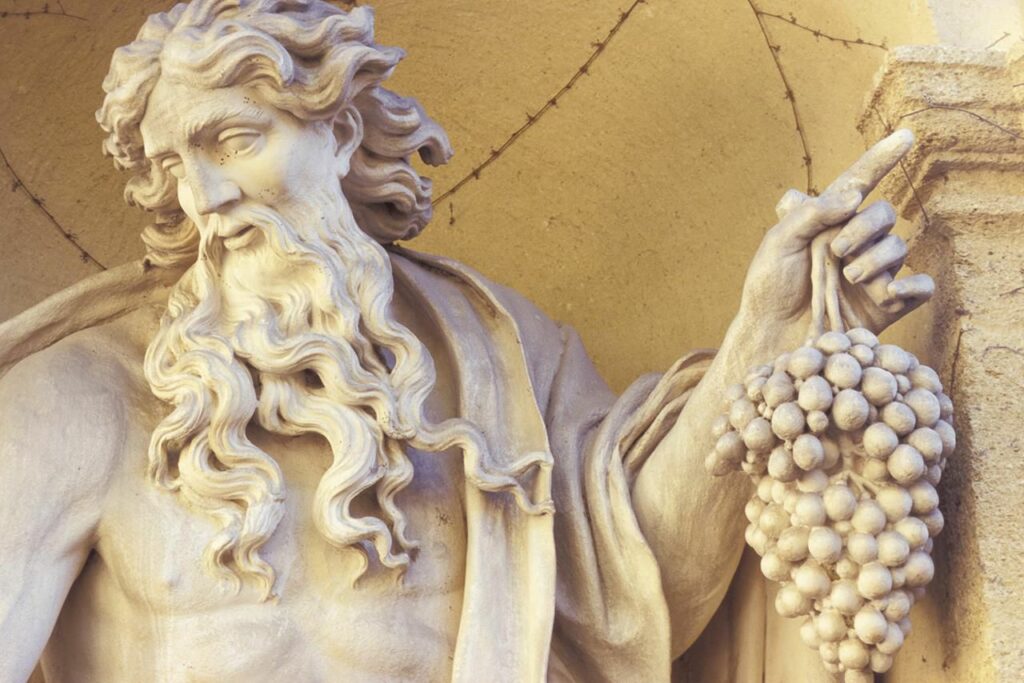 It is a famous historical monument, which for a long time housed a huge statue of this god – Zeus the Olympic. The sculpture resembled a work made by the skilled master Phidias. The place was erected with taste, there is a plan, according to which you can see with your own eyes another work of art – Parthenon. 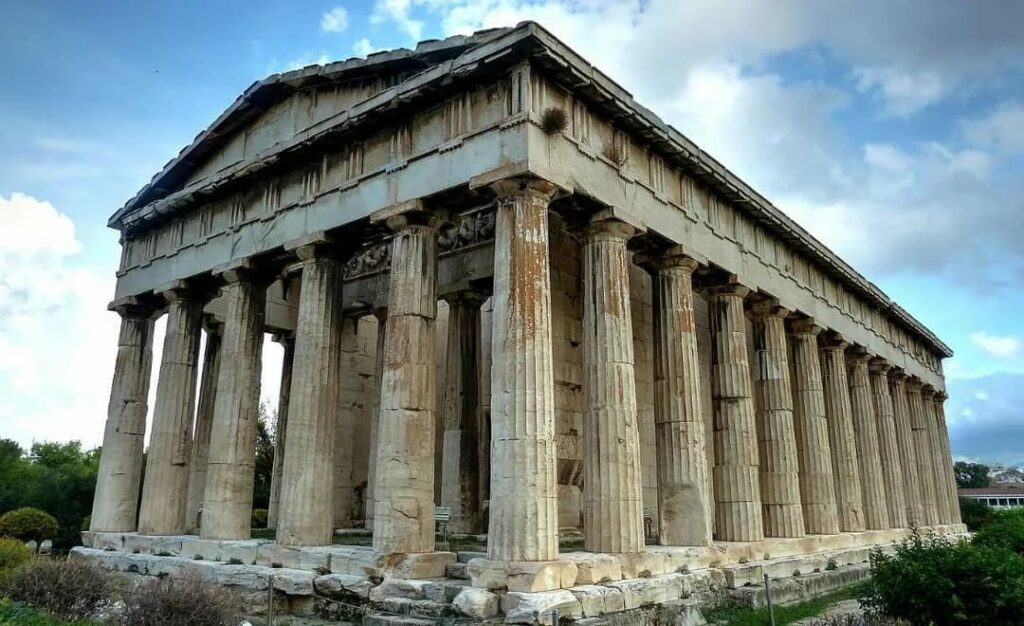