The fate of the Aztec Empire is only a tiny episode in world history, but the events of bygone centuries still stir the imagination: untold treasures, an ancient temple city, Aztec pyramids with grandiose panoramas opening from the tops. One of the most grandiose is the Pyramid of the Sun. The grandeur and achievements of the ancient culture leave an indelible impression of a trip to Mexico. 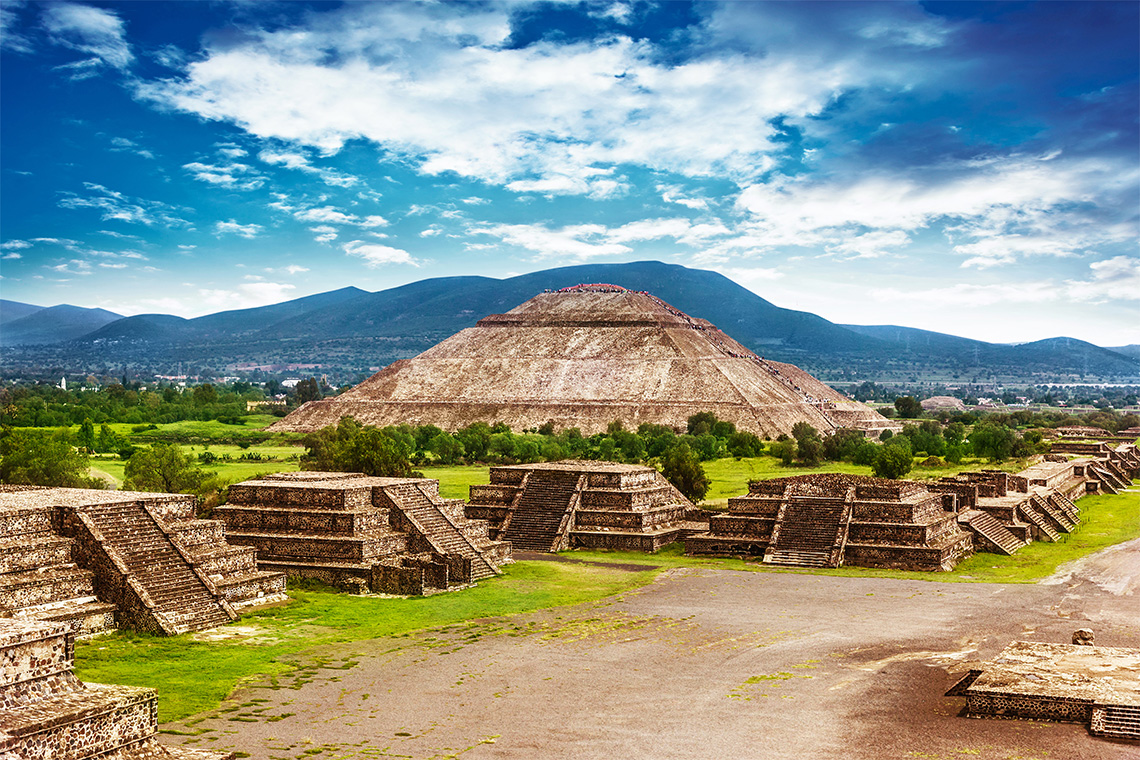 In 1168 the Aztecs had no land of their own and were so small that not every warrior could expect to get a wife from a tribeswoman. Having come from the north to the valley of Mexico City, they remained for a long time untethered – the clans were feuding among themselves, and other tribes would not let the newcomers into the developed territories.

Finally settling on the islets on Lake Texcoco, in 1325 the Aztecs began to build the city of Tenochtitlan. It eventually became the most magnificent city ever built by the Native Americans, a city-state that collected tribute from nearly four hundred conquered cities and villages.

The Aztecs had a written language, a calendar, schools, roads, and many crafts. They had no sails, no wheels, no draft animals, and their religion required human sacrifice.

The riches of Tenochtitlan and its ruler amazed the conquistadors who arrived in 1519, sometimes lacking the words to describe what they saw. Europe, too, was shaken when a Spanish ship brought the first shipment of Aztec gold. The fate of the empire, amid growing contradictions with subjugated tribes, was sealed. In 1521 Cortez’s detachments burned and destroyed the looted city. At the same time on its ruins was founded Mexico City, which three hundred years later became the capital of Mexico.

Get energized by the sun from the top of the pyramid

50 kilometers from Mexico City is the ancient city of Teotihuacan. When the Aztecs settled nearby, it had already been abandoned and partially destroyed for several centuries and had no name. But in the I-VII centuries AD it was a temple city of the Toltec Indians, and to judge its size and importance you can see a giant complex of religious buildings. With a population of 200,000 people, on feast days the city welcomed thousands of people from the foothill villages, pilgrims and traders.

READ
Childhood is in play: what's an adult to do at Disneyland Paris?

The highest building here is the Pyramid of the Sun – as it was called by the Aztecs, and they have given a new name to the city – Teotihuacan in translation means “The place where the gods touched the ground.

The Aztec pyramid is 64 meters high; 500 steps lead to a flat top, where you can enjoy magnificent views of all sides of the world, feed on the vital energy of the sun and imagine how in ancient times the astronomical observations were made here, they asked the gods for a good harvest.

Archaeologists found a tunnel and cave inside the pyramid, along with traces of sacrifices. Due to looting, the number of artifacts found is small, and one of them, an ocelot figurine, is preserved in the British Museum.

Other significant monuments in the area include the Pyramid of the Moon, the Citadel, the temple of Quetzalcoatl, and frescoes in the temple of agriculture.

The Pyramid of the Sun is a place of attraction for tourists, who, before visiting it, must equip themselves with water, a hat with a wide brim, glasses with dark glasses – and go, to charge with the energy of our common sun!

Ethnographic park-museum ETNOMIR is a unique space for dialogue of cultures, a territory of travel, discovery, inspiration, education and love.

In the 140 hectares of the Etnoworld there are architecture, national cuisine, handicrafts, traditions and everyday life of almost all countries. In addition to ethno houses, museums, workshops and other cultural sites you will find in the park developed infrastructure and services. There are 11 unique ethnic hotels – huts, mazanchas, yurts, chums, Himalayan and Nepalese houses and even an Indian palace.