The traditions of hospitality

Hospitality as a social phenomenon has existed for many centuries; it is a special kind of hospitality that involves providing food, shelter and protection to another person free of charge. Every country has its own traditions of hospitality, modest or incredibly hospitable, which include simply a friendly gathering around the table or lavish ceremonial reception of guests, even if it’s a passerby. 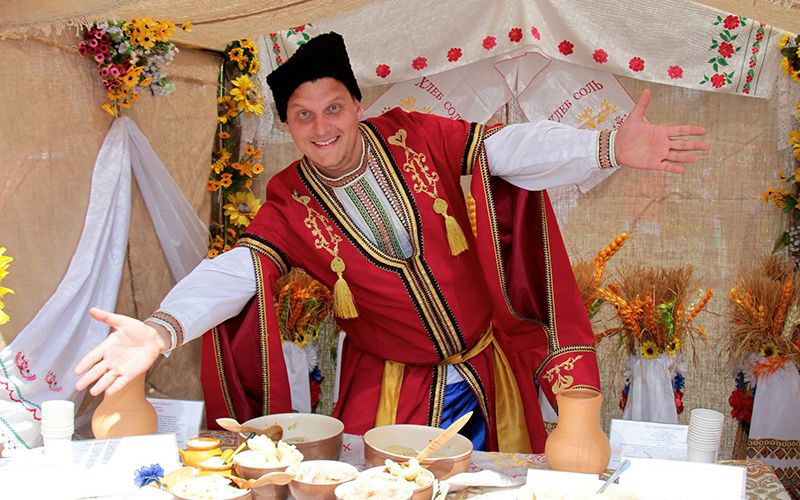 Meeting guests with bread and salt is considered a trademark of Russia, and the traditions of Russian hospitality are a vivid manifestation of the cordiality and kindness of our people. A guest in Russia is surrounded with care and respect, and is always generously treated with the best that is in the house. 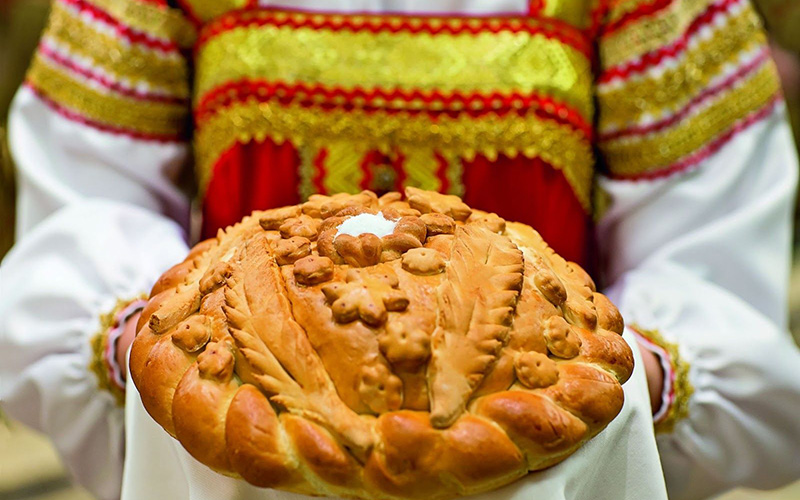 Some of the ancient customs are no longer observed today. For example, the ceremonial table in Russian homes usually stood in the “red corner. Guests were seated in places of honor, under icons, so that they were under the patronage of the saints. The master of the house gave each guest a slice of bread with salt: salt was a very expensive product, and was put on the table only on special occasions. Another measure of the treatment of the guest was the strength of the brewed tea, since tea leaves were bought in limited quantities and were usually brewed several times.

Before leaving the guest was offered a ‘tea glass’, which had to be drunk to the bottom, leaving a few drops to be poured over his shoulder. The old expression “good riddance” was a sincere wish for a good trip. And the custom to sit down for a minute before the road has pagan roots: the master of the house in ancient Russia was considered a house-door, and, staying for a while, the guest as if waiting for the permission of the guardian of the house for a trip. 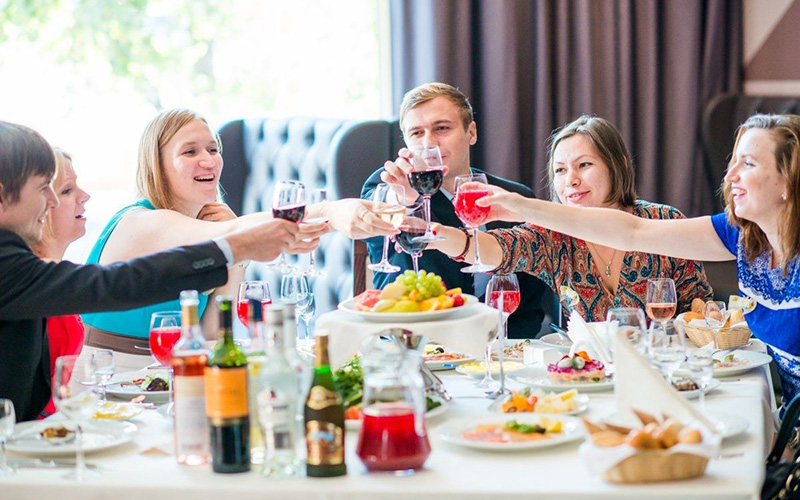 In many European countries an invitation to a guest does not mean that you sit down there at a richly set table, and you will be heartily fed. European meals are often very modest, as the main purpose of such gatherings is to socialize with friends. In England or France they do not serve huge portions of food at the table, and if you are invited to tea or coffee, then you can not count on more than a cup of drink with a cake or a slice of cake. Therefore you should go visiting either having a snack at home or taking some treats with you.

It is not customary to visit European countries without an invitation, but if so happened and you found yourself at a family dinner, you will have to wait until the hosts finish it – you will not be called to the table. And in Holland, Norway and Germany people prefer to meet even with their closest friends not at home but in a café or restaurant and the guest will pay for himself.

But such rationalism is not common to all European nations. In Spain, Ireland and Italy it is better to visit on an empty stomach: they serve a lot of food and it is delicious. Moreover, you must try all dishes offered, even if you “can’t eat anymore” – refusal will offend your host. 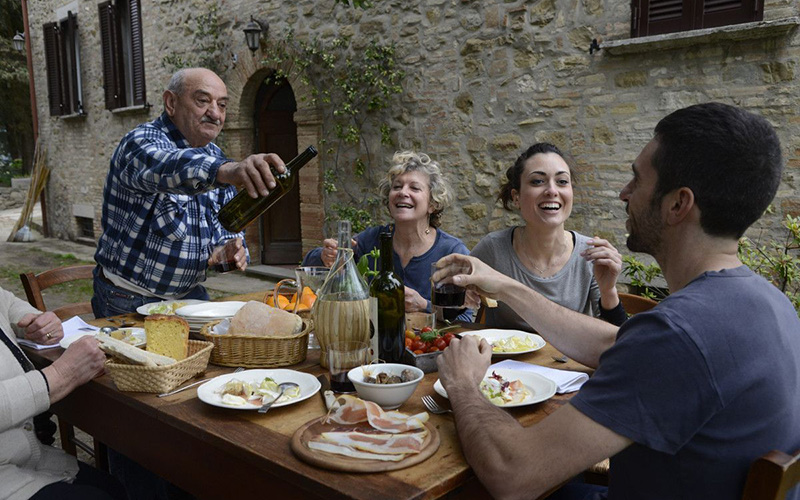 How they receive guests in Asian countries

The traditions of hospitality in different Asian countries differ considerably, but in each of them even an uninvited guest is considered most welcome and will be definitely invited to the table.

In Turkey you can receive an invitation for lunch even from a recent acquaintance, and it is normal to come to your neighbor for coffee and chat on casual topics. You are sure to be treated to national dishes and delicious homemade pastries, for which Turkish women are great masters. 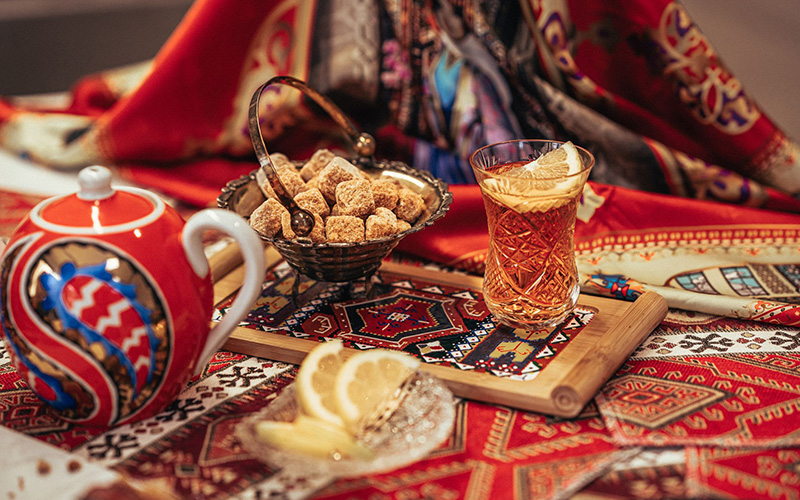 In Malaysia they will definitely lay a table for anyone who comes to the house, at least with a light snack, but here it is accepted to start eating only after the master’s invitation. It is by no means allowed to refuse food, even if you are not hungry. The Moroccans and Egyptians are no less hospitable; they will even throw an unscheduled holiday dinner in honor of their guest. 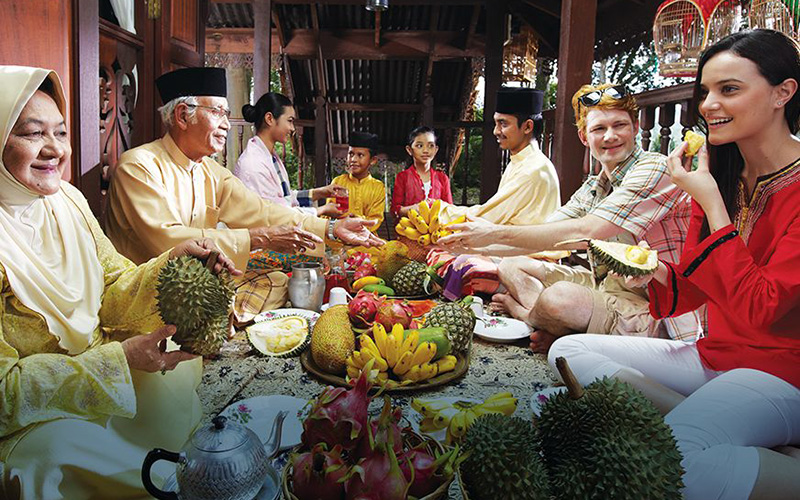 Hospitality is considered one of the main cultural traditions of the Caucasus. In Georgia, Armenia, Azerbaijan, Abkhazia, and Ossetia it is a sacred duty to receive guests well. Any traveler here is considered a messenger of God, so they are always ready to give him a table and the best room in the house. 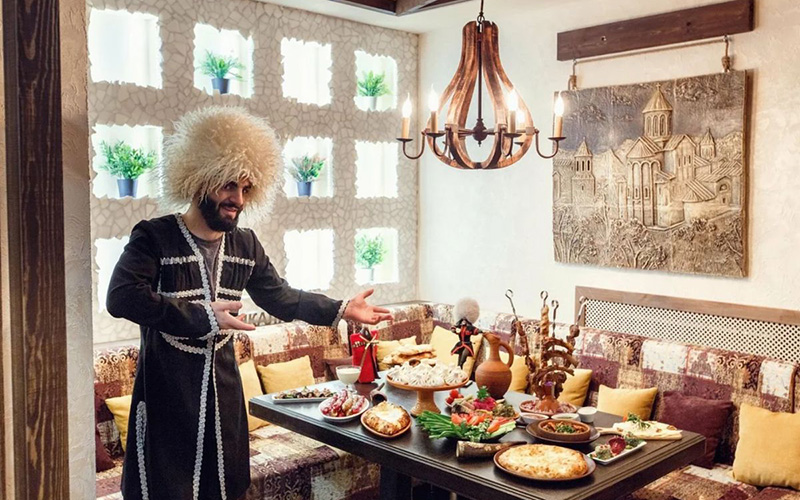 The ancient Kazakh traditions of hospitality include many different customs, some of which are no longer used today. For example, in a Kazakh yurt, the guest was seated on the most honorable place, in the center, and treated to koumiss and horsemeat dishes. Specially important and honorable guests were given gifts by the hosts (most often a warm caftan – shapan). 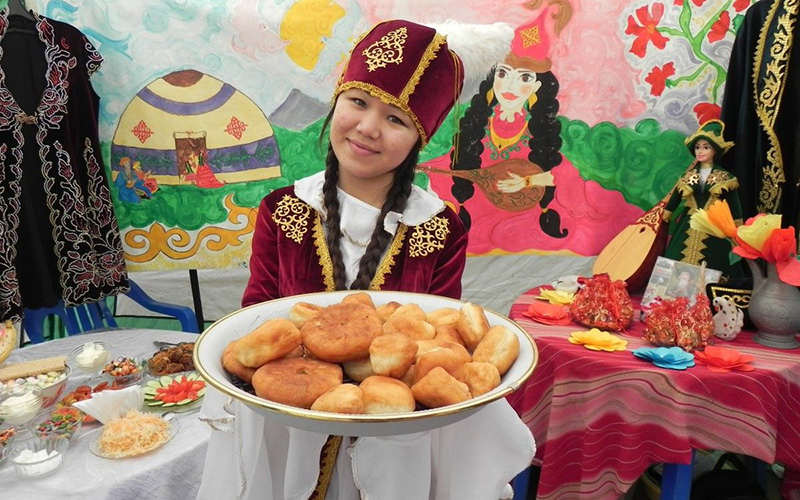 In Japan, it was a great honor to be invited as a guest. This was not because the Japanese were too proud, but rather out of modesty: they considered their homes unworthy of receiving guests. It is not customary in this country to come to a house for lunch or dinner without a beautifully wrapped gift. Usually the hosts try to give a return gift, which, according to etiquette, should be politely declined.

In preparation for receiving guests, the host sprinkles water in front of the front door so that the ground is not too dry, and lights incense in the hallway. Before entering the house, one should take off one’s outer clothing and put on gyta (wooden sandals shaped like benches). Japanese people eat at low tables, sitting on special mats – tatami. An important ritual is table serving: all dishes are carefully decorated before serving, and served in a strictly defined order, 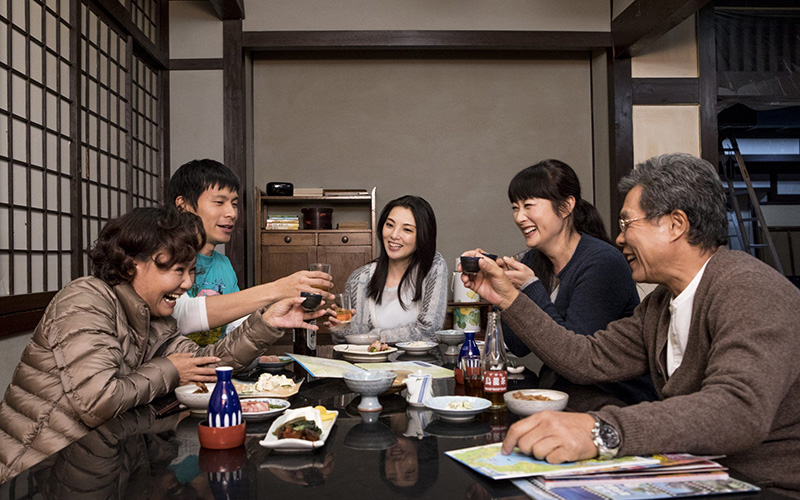 Chinese people are a very hospitable nation. They enjoy visiting and hospitably receive guests. At a dinner party you will be offered a variety of delicious dishes, all of them must be tasted and complimented. Food in China was usually taken from common dishes in the center of the table, although today individual plates are often used as well. One of the unusual features of Chinese table etiquette is that eating here is usually noisy and messy. If a person eats leisurely and silently it means that he or she does not like the food. 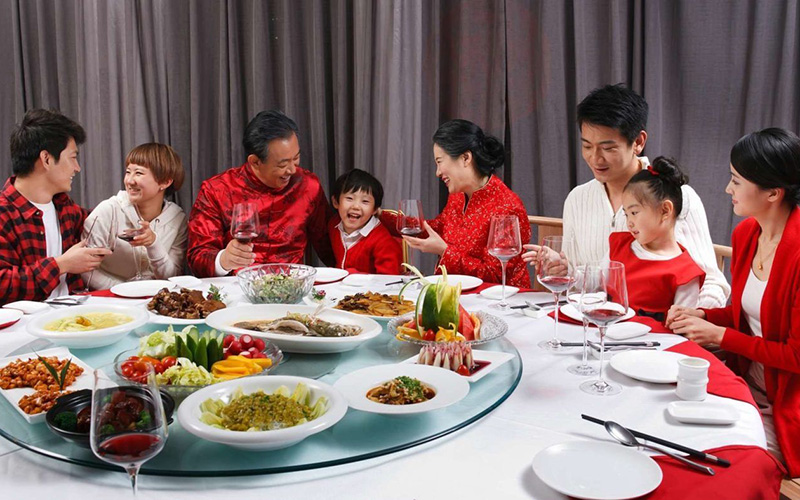 American hospitality is much easier than, for example, in China or the Caucasus. It is not customary to spend the whole day in the kitchen to cook a multitude of dishes, and the first place is to have a pleasant meal together, not a banquet with exquisite delicacies and expensive dishes. Therefore the dishes are often cooked on the barbecue and the food is sorted out on the plates by the guests themselves. Catering is also popular, when a company takes care of the cooking, delivery to the house and serving the table. 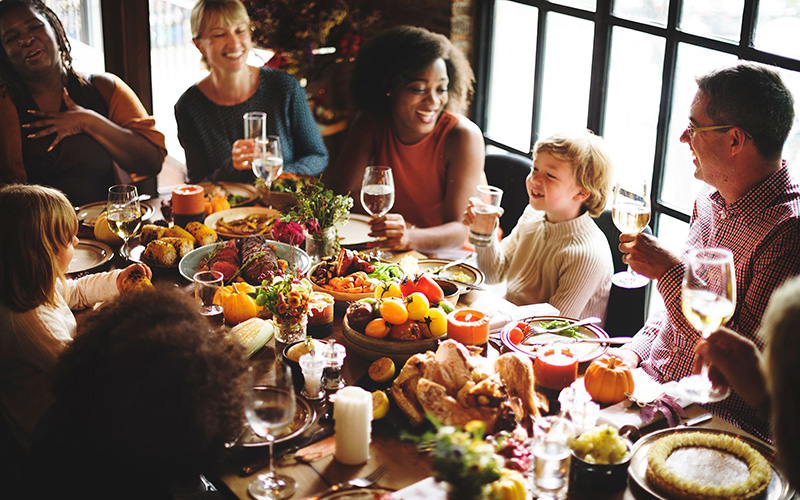 However, each country in America has its own customs and traditions of hospitality. For example, Brazilians are open, very friendly, and always welcome guests, even uninvited ones. And when a guest leaves, the door will be opened by the host, which is an omen that he will come back to the house. But in Argentina, a stranger will not open the door – for security reasons.

In Bolivia it is not customary to seat guests at a common table, unless they are relatives. A separate table is set for them, where they can enjoy all the food in a comfortable environment, without being embarrassed. In Mexico, the guest, before sitting down at the table, should greet everyone present personally, each in his or her own way.

As Latin Americans are not too picky about food, the guests may be offered light sandwiches or pizza, and on special occasions they will cook meat on the grill. But here they treat guests to the traditional drink, “mate”, always and everywhere, and drink it from a special container, a pumpkin kalebas, chiseled through a tube.

Hospitality in Africa and Australia

African countries are among the last in the ratings of welfare, but the traditions of hospitality of the peoples of this continent are not poor. And if you can not find refined treats in the house, it will be compensated with attention, care and kind attitude. Come to visit an African family is better with gifts, and they will also take you with some gifts. And if you come to the country for a long time they will offer to help you to choose the best day of departure, consulting with a local shaman witch doctor. 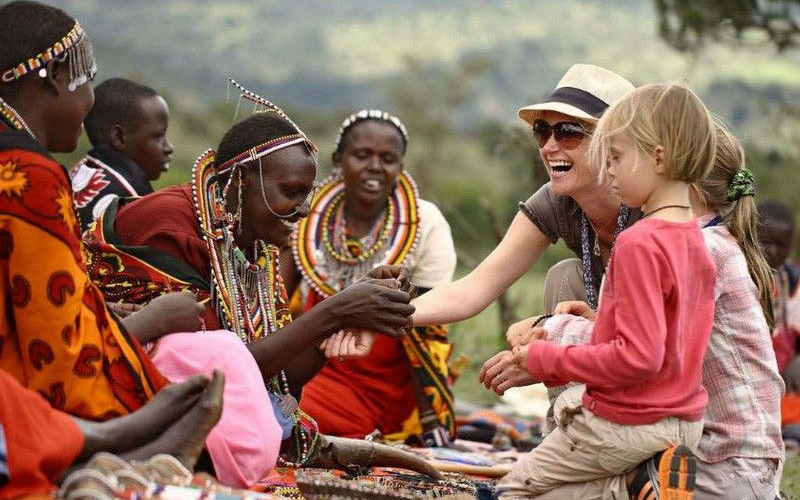 As for the hospitality of Australians, they are friendly and sociable, but don’t pay much attention to the feast and variety of dishes. They will certainly pour you a good cup of coffee, invite you for a bottle of wine, and if you come for lunch, they may offer to grill meat on the grill in the backyard together with the hosts.