6 interesting places in the lakes of Trentino

Did you know that there is a lake in Trentino whose waters turned red? And that Lake Garda has the most northern olive groves in the world? Or that Lakes Levico and Caldonazzo in the Valsugan Valley are among the warmest in Europe? Here are just a few curious facts about our lakes, and in all Trentino there are 297 of them. Some of them are small bodies of water surrounded by mountains and forests, others are large lakes with many beaches equipped for safe bathing.

We’ll introduce you to 6 of them and start with a story you may already be familiar with…the redwoods lake story! 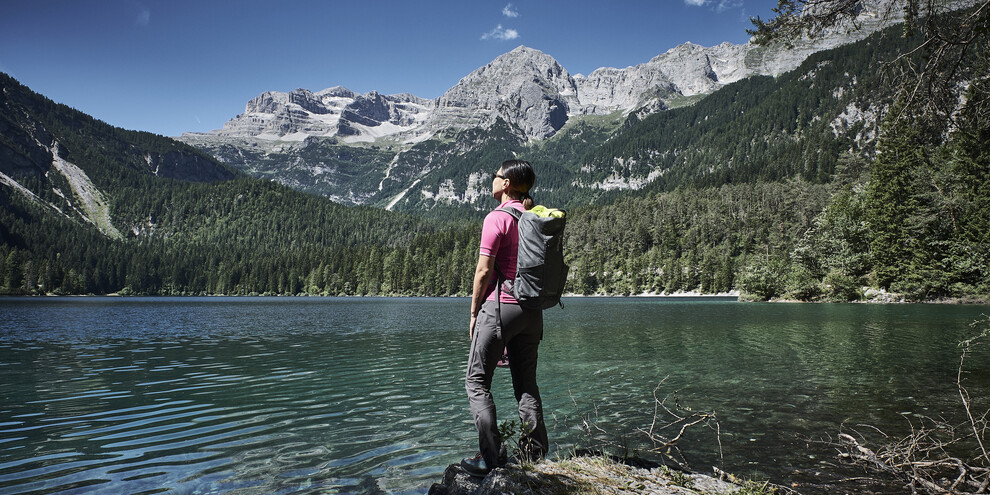 In the greenery of Adamello Brenta Nature Park is a lake whose waters were colored red in the summer until the mid-1960s. This color was due to the special algae Tovellia sanguinea, which multiplied in these waters. But our grandparents explained this phenomenon to the little ones by telling the legend of Queen Tresenga and her battle on the shores of the lake.

The winds of Lake Garda

If you like sailing or windsurfing, you probably already know this interesting fact about Lake Garda in its Trentine part. There are two winds that blow here: the Peeler and the Ora. The first one blows from the north in the morning, until about 12 o’clock, while the Ora, coming from the south, starts blowing in the afternoon, which allows those who practice these sports to have a constant source of traffic during the day. 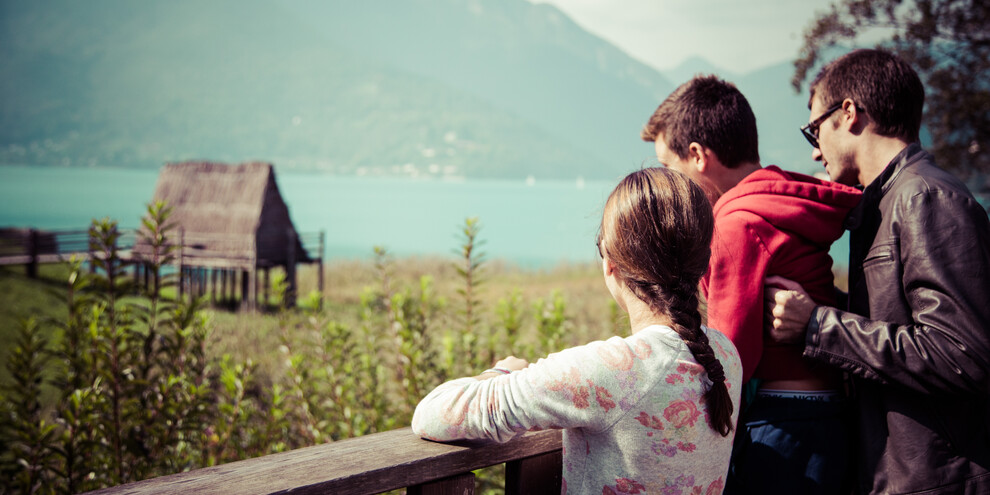 The Pile Buildings at Lake Ledro

This curious place is particularly appealing to the youngest travelers: on Lake Ledro, near Lake Garda, a small Bronze Age village on stilts has been carefully restored with a beautiful museum that hosts many themed events. The village and museum are located in an archaeological area, which since 2011 is a UNESCO World Heritage Site. 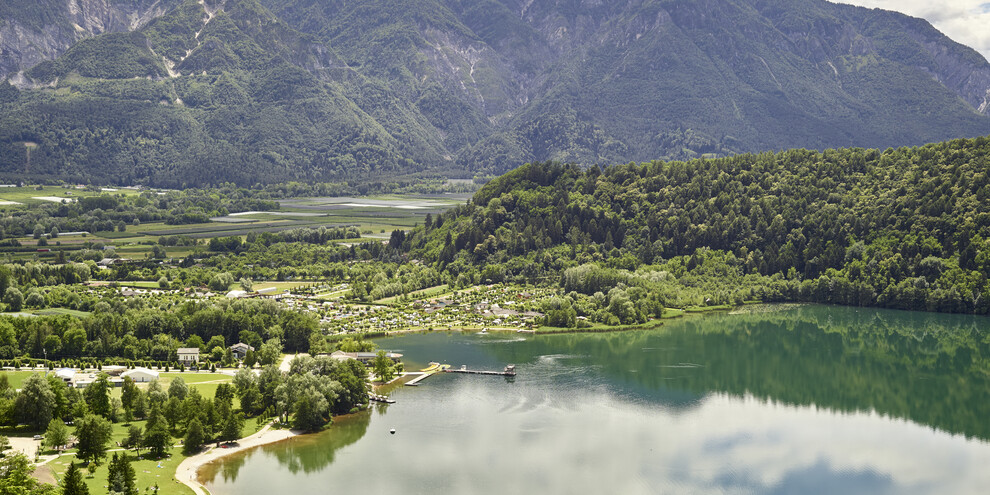 Lakes of the Valsugan Valley

The region of Trentino boasts a very important achievement: the Valsugana Valley, which is located near Trento, has become the first destination in the world with a certificate of sustainable tourism . Here are two large lakes, Caldonazzo and Levico, whose mirror-like waters are the warmest in southern Europe and ideal for bathing, especially after an excursion or a bike ride.

Crystal clear waters, the panorama of the Dolomiti di Brenta massif and well-kept, well-equipped beaches. These are the characteristics that have made Lake Molveno, in the Paganella plateau, the most beautiful lake in Italy. It has been awarded by the Touring Club Italiano and the association Legambiente. To fall in love with it, you only need to look at this photo. 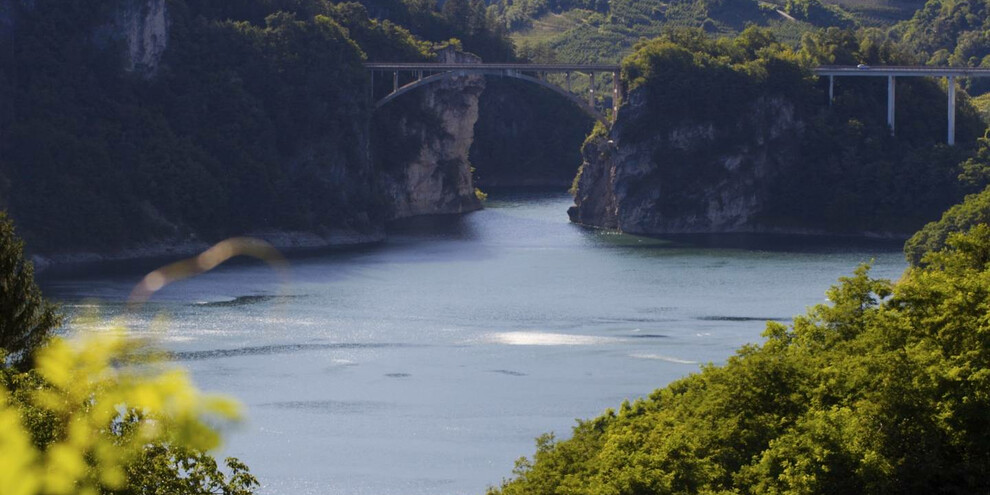 In the valley of Val di Non there is a lake that hides in its waters the remains of an ancient road with bridges and paths: this is Lake Santa Justina, an artificial reservoir created in the early 1950s. When the water level drops at the end of winter, you can see some of the bridges of the old road appearing above the water.

On the lakes of Trentino: where to canyoneer, swim and fish

Lake Garda is the most famous in Trentino, the largest in Italy and one of the most beautiful in the world. The stable winds of Ora and Pelère are reliable helpers for yachtsmen and the best regattas are held in the north of the lake between Torbole and Riva del Garda. 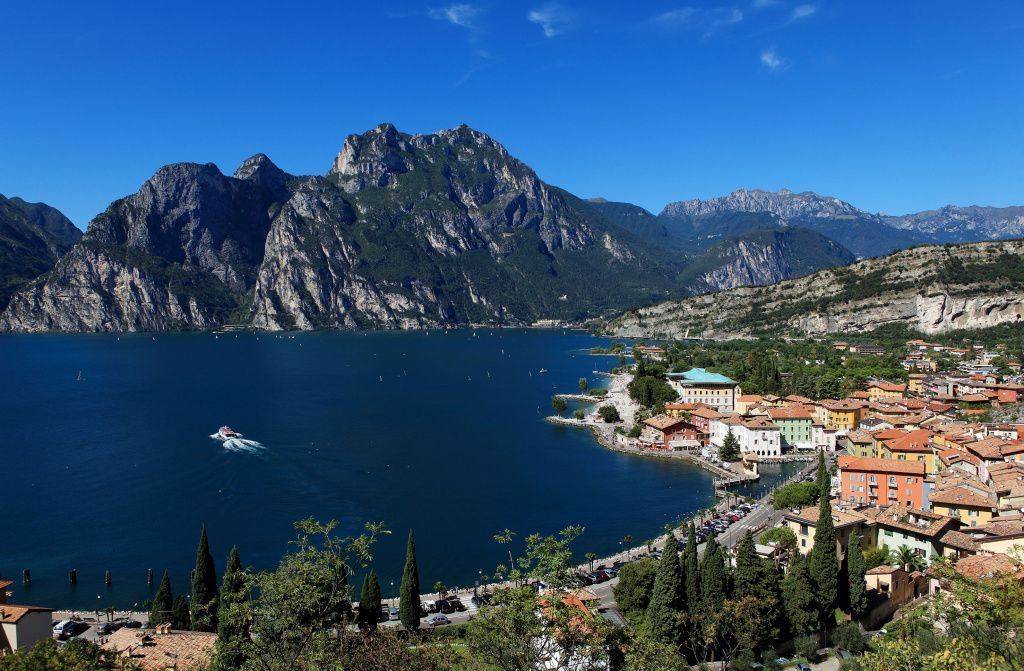 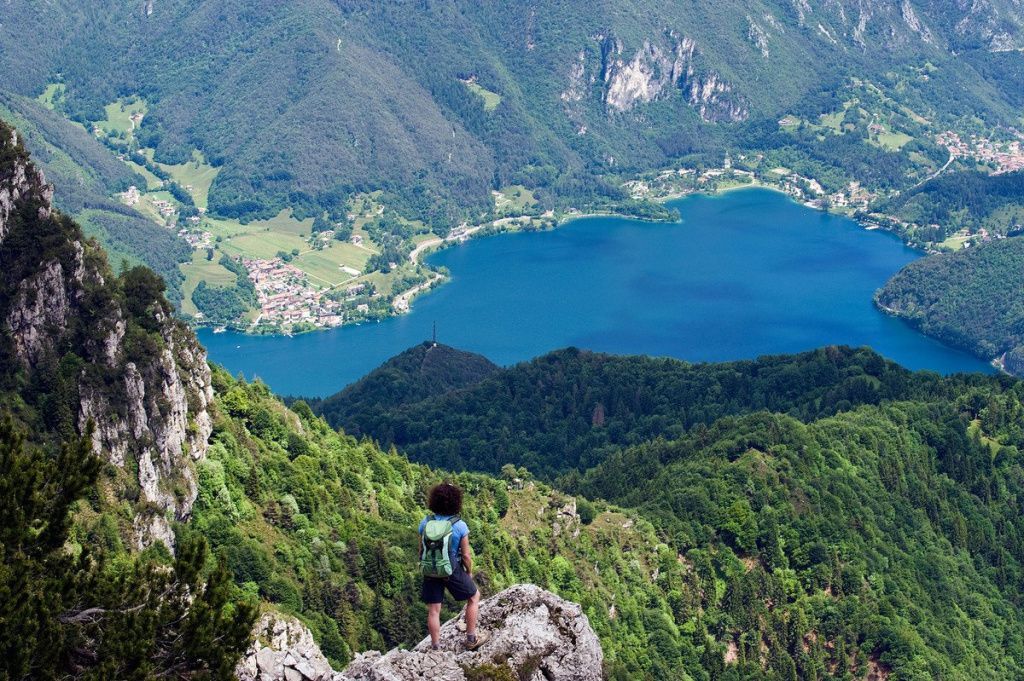 In the valley of Val di Ledro is Lake Ledro, an ideal place for beach holidays in the mountains: the villages of Pieve, Mezzolago and Molina offer boat, catamaran, windsurf and canoe rentals.

The plateau of Paganella is worth the trip to visit the lake of Molveno, the largest of those located above 800 meters. The Italian Touring Club cycling community has called it the most beautiful lake in Italy, because the peaks of the Brenta Dolomiti are reflected so vividly in its cobalt blue. The grassy beaches of Molveno have centers and rentals for all water sports.

The most popular lake for beach holidays in Trentino is Caldonazzo in the Valsugana Valley. Here you can also take a ride on the exotic Asian dragon boats: to drive them you need 16 friendly rowers and one drummer-helmsman.

Where to walk and admire the view

257 of Trentino’s 297 lakes are high in the mountains. To allow tourists to admire the reflections in the mirror-like water surface, there is a dense network of walking paths through fields, forests and mountains throughout the region. The largest number of lakes are concentrated in the Lagorai mountain range in eastern Trentino. Another lake region is the Adamello-Brenta Natural Park . 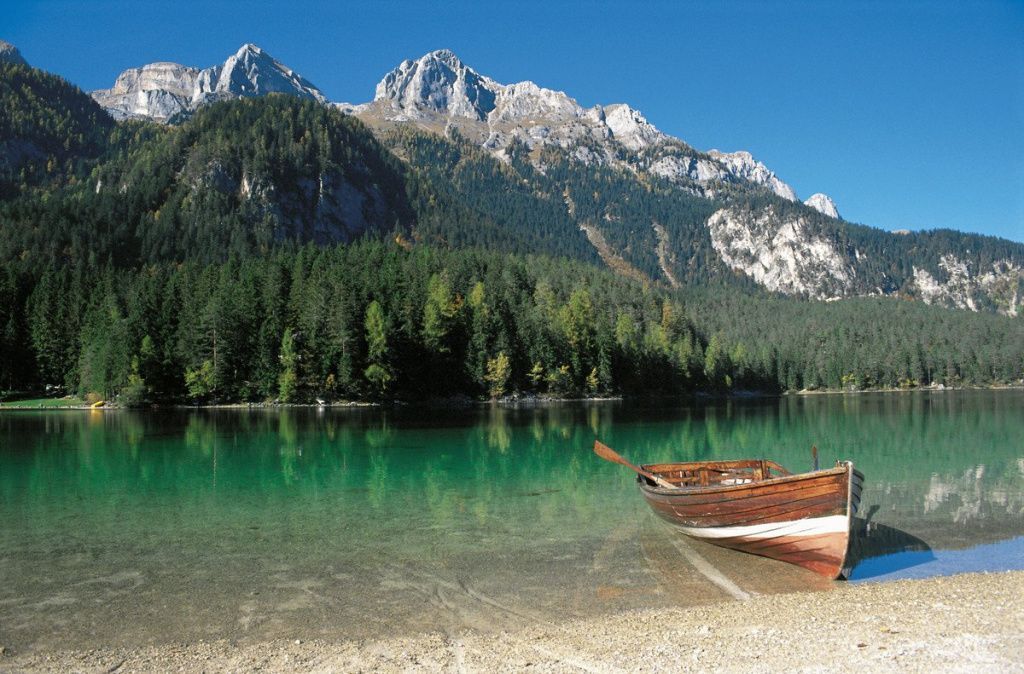 In the mountains above Madonna di Campiglio is the “5 Lakes” route, which takes you to the reservoirs of Ritorto, Nero, Serodoli, Gelato and Nambino. 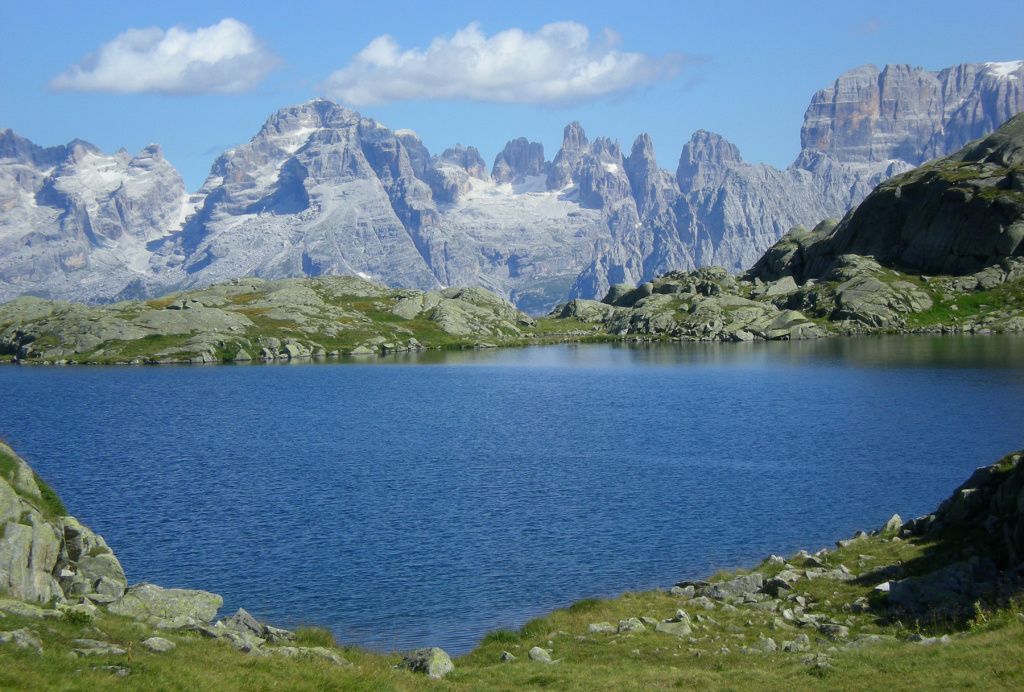 In the Cevedale mountain range, the circular route through the lakes Marmotte, Lungo, Nero and Scuro is interesting, starting from the mountain hut Rifugio Cevedale-Guido Larcher in Val Venetia. And the valley of the Val di Rabbi is highlighted by Lake Corvo and a whole scattering of small Sterna lakes.

Where to look for adventure

The churning waters of the Noche, Chiese and Vanoy rivers are ideal places for paddlers. National Geographic has listed Noche as one of the top 10 rafting spots in the world, but you can also do this friendly sport on other rivers in the region, such as the Avisio River. 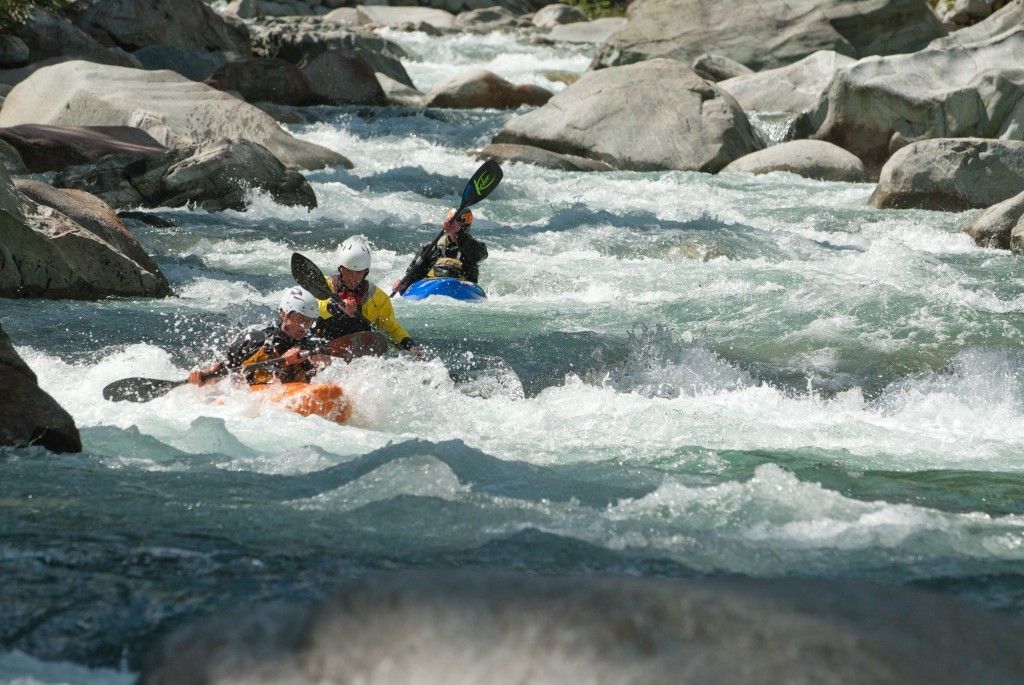 Wade along a gorge, rappel under a waterfall and dive into natural baths: you’ll remember the day you first tried canyoning for the rest of your life. Go on the route only under the guidance of an experienced instructor. In Trentino this type of recreation is particularly developed in the Garda area and in Valle di Ledro where there are about two dozen routes of varying difficulty. Other interesting routes are along the river Grigno and the Maso stream, between Tessino and Valsugana. In Primiero, it is worthwhile to walk along the beautiful Noana Gorge. A more relaxed activity is river trekking, for this go to the Sarka River in the Limaro Gorge. 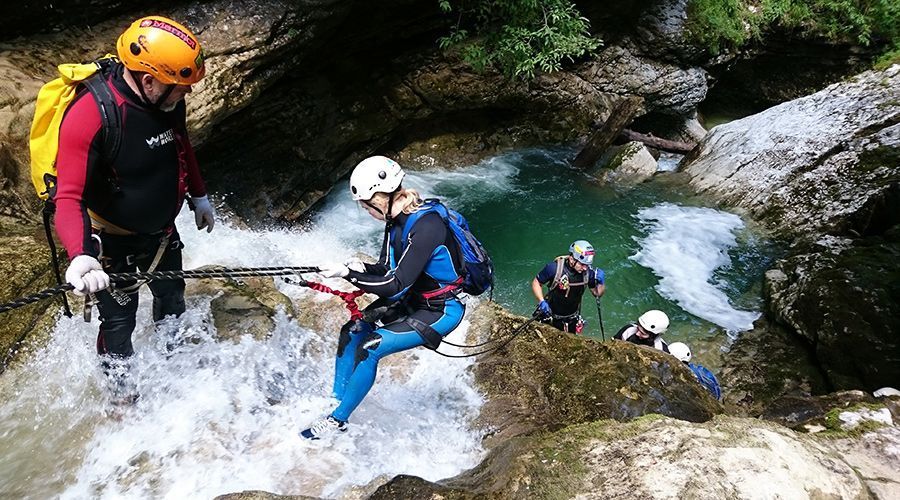 The aquatic ecosystems of rivers and lakes are often unlike one another. On the banks of lakes, mountain streams and the Adige River there are about 350 fishing spots, which are monitored by 33 fishing associations. This makes Trentino one of the most popular regions for lovers of tourism and fishing. The Trentino Fishing project will help you to find the ideal location and the best fishing spot: the website offers information about the fishing spots, the nature reserves where you can fish only on the “catch and release” principle, popular fishing techniques, fishing permits or special tours: 68 experienced fishermen from the Trentino Fishing Guides community are ready to be your companions, tour guides and instructors. 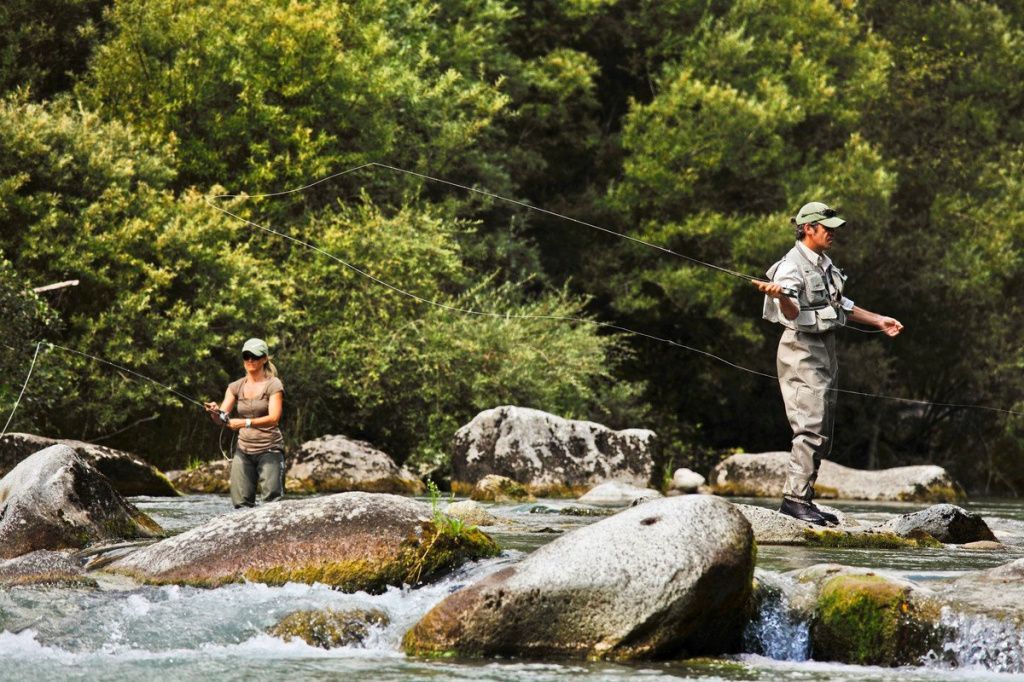