Santorini (Greece) – the most detailed information about the island with photos. The main sights of Santorini with descriptions, videos and a map.

Santorini (or Tira) is a picturesque island in Greece in the Cyclades archipelago, located in the Aegean Sea. It’s one of the most stunning places in Europe and a true Greek paradise, attracting honeymooners and lovers as the most romantic place to stay. Santorini – this is incredible sunsets and pearly white buildings, climbing in tiers on steep slopes, churches with blue domes and charming windmills, great gastronomy and stunning beaches.

Interestingly, Santorini is actually a group of islands: Thira (the largest island), Thirasia, Aspronisi, Palea and Nea Kameni. They took their present form in 1650 B.C., when there was a strong volcanic eruption. In this case, the volcano of the same name is still active. During the eruption in ancient times formed a vast caldera (volcanic depression), which was flooded with water.

Santorini is considered a true gem of Greece, fascinating with its fantastic volcanic landscapes, steep cliffs and crystal clear sea. But the most amazing thing here is the architecture of the coastal villages, built right on the edge of a volcanic depression with breathtaking views of the Aegean Sea. These picturesque settlements feature fabulous white houses resembling sugar cubes, punctuated by charming cobbled streets and adorned with beautiful churches with bright domes.

Things to do (Santorini): 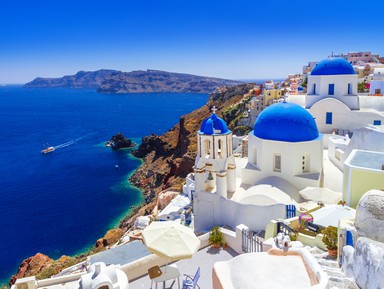 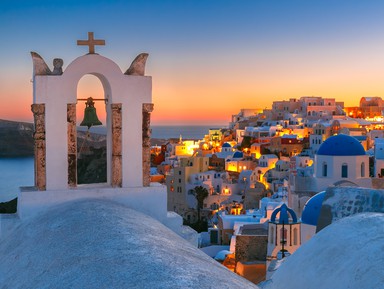 Santorini is located in the southern Aegean Sea, 200 km from the Greek mainland. It is a semi-circular archipelago of volcanic islands, nestled between the islands of Ios and Anafi. The area of the island is 96 km 2 and the coastline has a length of 69 km. 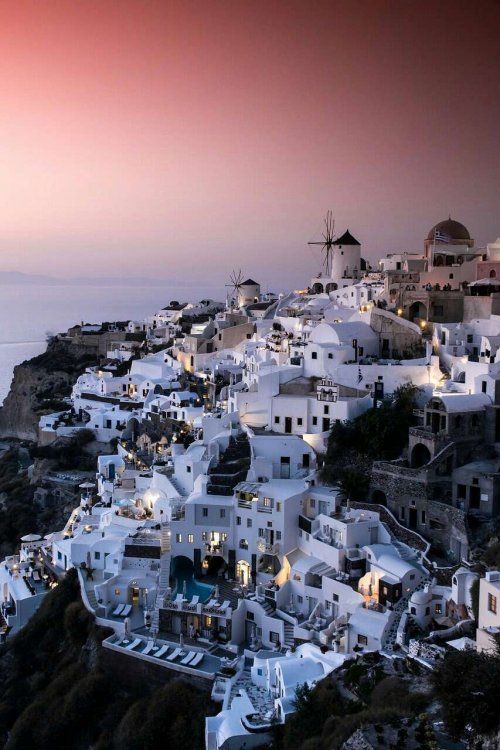 The city of Ia on the island of Thira. Santorini

The most impressive part of the relief is the famous caldera, which is closely linked to the history of the island. This volcanic depression is round and completely filled with water. In fact, it is the only sunken caldera in the world. It resembles a lagoon, up to 400 meters deep. Caldera is surrounded by steep cliffs, on top of which are built beautiful villages.

The eruption that formed the caldera caused giant tsunamis that struck the northern coast of Crete and destroyed the Minoan civilization that flourished at the time.

Santorini has an arid Mediterranean climate characterized by hot, dry summers and warm, slightly rainy winters. Santorini is subject to strong northerly winds in July and August, which can interfere with calm sea walks.

How to visit the island for budget tourists

Santorini is an expensive resort, even in low season. But there are some simple ways to save a little money: 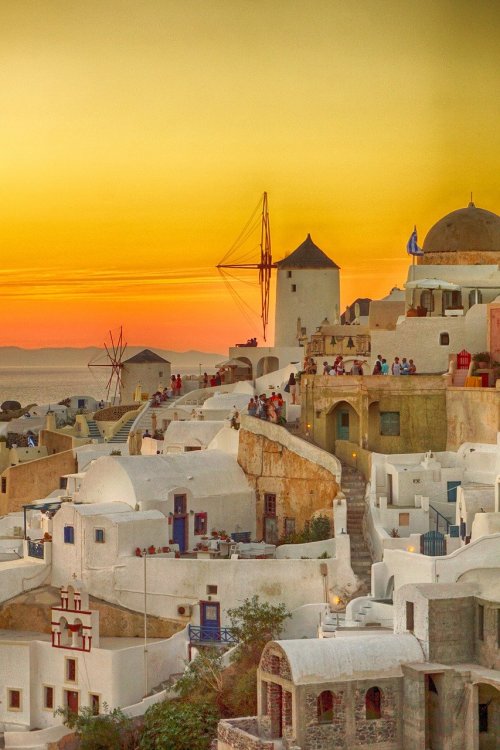 The best beaches in Santorini

– The capital of Santorini and the busiest city of the island. From here you can take a bus to almost anywhere in Thira. – The jewel of Santorini, a colorful village on the rocks of the volcanic caldera, located at the northern tip of the island of Thira. It is a place with charming architecture and stunning sunsets. – a small village located at the highest point of the caldera, which offers the best view of Nea Kameni, the black volcanic island in the center of the lagoon. There is an opinion that the sunset views here are as good as those from Ia.

The tourist season in Santorini lasts from May to October. The resort is one of the most popular and expensive in Europe, so during the high season (July to September), prices can be a bit steep. To explore the nature of the island and to save a little money we recommend to visit Santorini in the transition months of April / May or October / November. This time is still warm, but no longer hot.

The island of Santorini can be divided into two parts: western and eastern. The most popular western part of the island, where there is the famous caldera and picturesque coastal villages such as Fira and Ia, built on the rocks. The eastern side of Santorini resembles the rest of the Greek islands, although also quite picturesque. Accommodations on the east side of the island should be more budget-friendly. 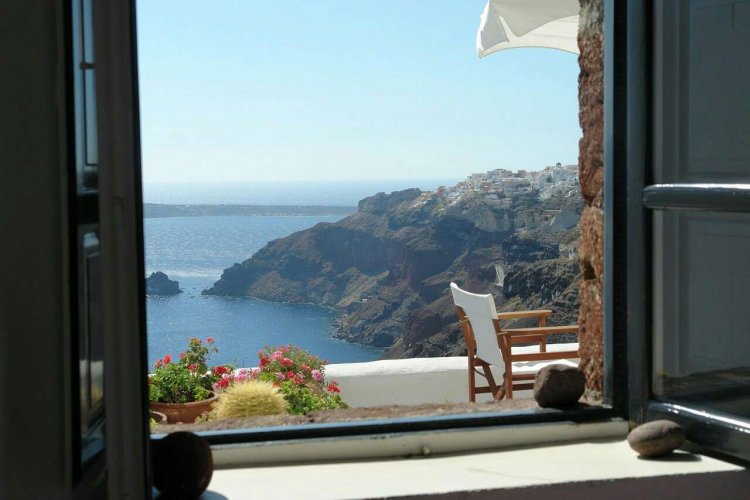 View from the hotel window. Santorini

Recent archaeological findings indicate that Santorini was inhabited as early as the Neolithic period, about 3,600 years BC. A major city of the Minoan civilization was built on the island, destroyed by a major earthquake in 1650 B.C. In 1500 BC the Phoenicians settled there and founded the city of Thera. In 1100 BC. Santorini was conquered by the Lacedaemonians (Spartans).

During the Hellenistic period Tira, the largest island of Santorini, due to its central position in the Aegean Sea, became an important trading center and naval base for the Greeks.

Interestingly, the modern name of the island was formed in the 13th century by the Crusaders (or Venetians) from the name of the small church of St. Irene (Santa Irini) in Perissa. 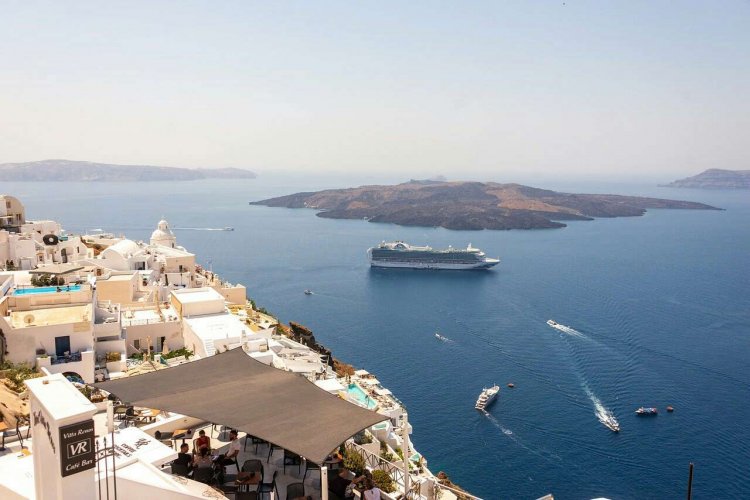 After the collapse of the Roman Empire and for most of the Middle Ages, Santorini was part of the Byzantine Empire. In the 13th century, the islands were ceded to Venice. The Venetians owned Santorini until the 16th century, when the Turks arrived and turned the local port into one of the most important ports of the Eastern Mediterranean.

In the early 20th century, after a series of wars Santorini is in decline. In 1956 there is another catastrophic earthquake, forcing the inhabitants to leave the islands. Santorini begins to “revive” only in the 1970s. And now it is one of the most popular resorts in Greece and throughout Europe.

The international airport is located on the island of Thira, north of the village of Kamari. It has regular flights to Athens as well as seasonal flights from Dusseldorf, Stuttgart, Frankfurt, Munich, London, Milan, Zurich, Stockholm, Copenhagen, Oslo, Paris, Barcelona, Prague, Venice, Rome. From the airport you can take a bus to Fira, from where you can take buses to other places in Santorini.

You can also go here by ferry from Athens and from many Aegean islands (Mykonos, Crete, Paros, Naxos). The port at which all ferries to Santorini arrive and depart is called Athenios (or New Port). It is located on the southwest side of the island of Thira, 9 km from Fira and 19 km from the village of Iaia.

Santorini has a well-developed bus network. Roads on the islands are good, but often quite narrow and winding. If public transport does not suit you, you can rent a car or motorcycle. 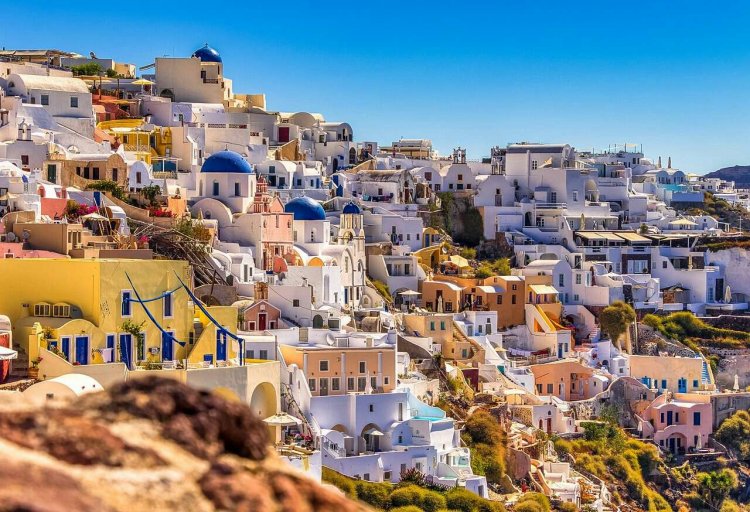 A great souvenir brought back from a trip to Santorini is local wine. You can also buy cosmetics made from volcanic ash, jewelry, ceramics and fabrics made in the traditional way.

Santorini has an interesting cuisine, shaped by the climatic and natural features of the island. Here we recommend trying the local grilled fish or seafood, melidzanosalata, mashed garlic and olive oil white eggplant, tomato fritters, dolma and great local wines.

The best recommendation is to stay away from the expensive restaurants and try to find a traditional tavern where the food is much cheaper and sometimes tastier. 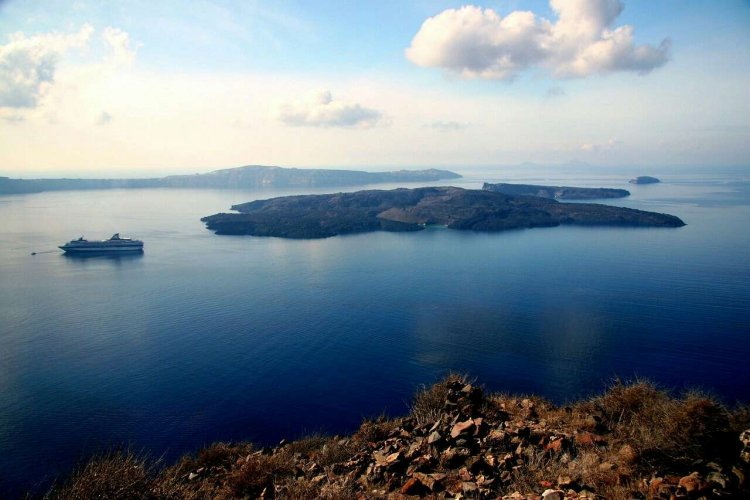 Caldera is one of the most famous attractions of Santorini, a unique natural object, formed by a volcanic eruption more than 3,600 years ago. It is a sea-filled volcanic crater with an area of 84 km 2 , surrounded by steep cliffs. The volcano itself is located on the island of Nea Kameni, almost in the center of the caldera. 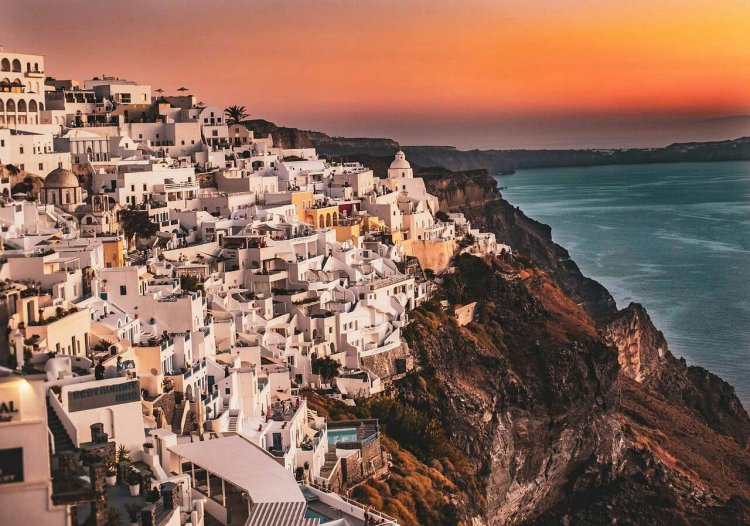 Fira, the capital of Santorini, is located in the eastern part of the caldera, on several high cliffs. It is the largest city on the island and consists of traditional whitewashed houses and terraces, pretty winding alleyways, small squares and churches with blue domes. A picturesque 10-kilometer trail connects Fira with Iaia.

Fira, like almost all settlements in Santorini, lives off tourism. Most of the buildings are small hotels, apartments, restaurants, tavernas and stores. 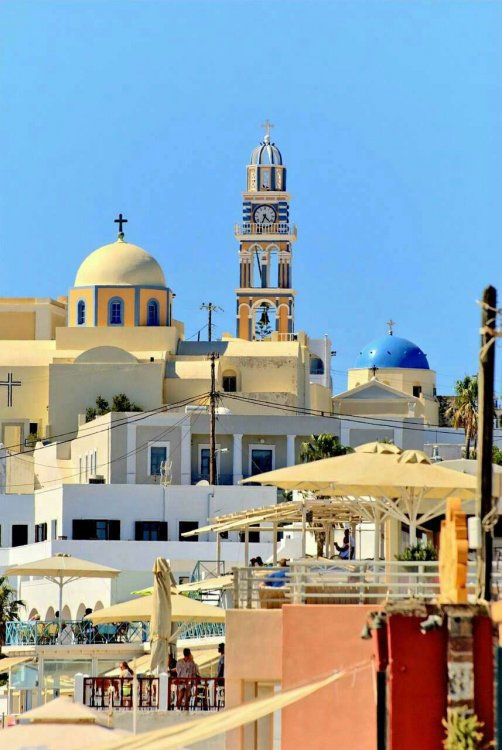 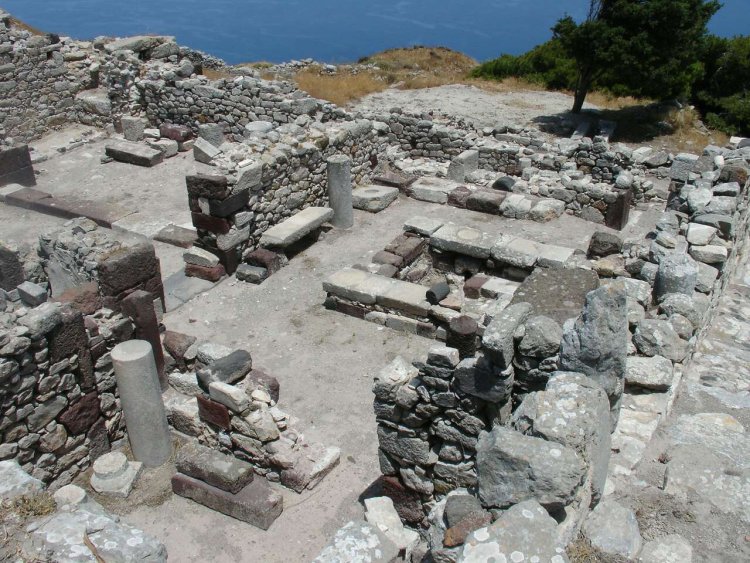 Thira is the ruins of an ancient city, including fragments of Hellenistic temples and foundations of Roman and early Byzantine structures. Ancient Tira is located on the southeast coast of Santorini and was founded in the 9th century BC.

Finds from here are on display in a small archaeological museum located near the upper station of the cable car in Fira. 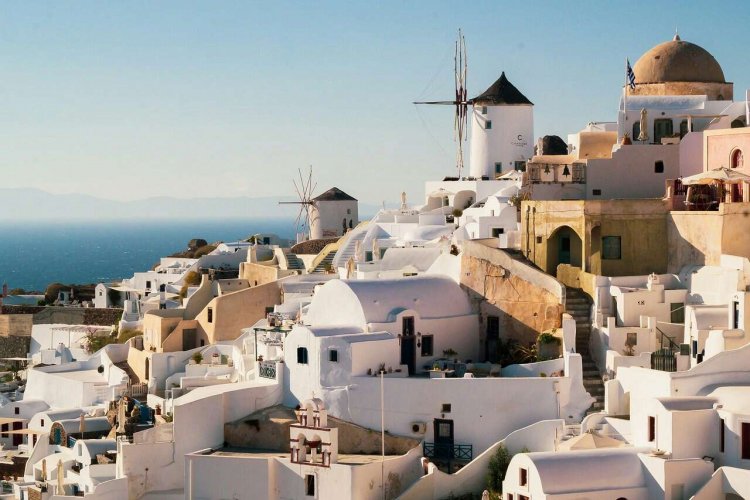 Iya is a coastal village at the northernmost point of the caldera and a true gem of Santorini, famous for its incredible sunsets. It is a picture-perfect Cycladic village, most of whose houses have been converted into luxury hotels with landscaped pools and stunning views of the caldera.

Windmills are one of the symbols of Santorini. Such structures operated on most of the Cyclades Islands from the 16th to the late 19th century, taking advantage of the frequent local winds. Most modern mills are tourist attractions converted into boutique hotels. 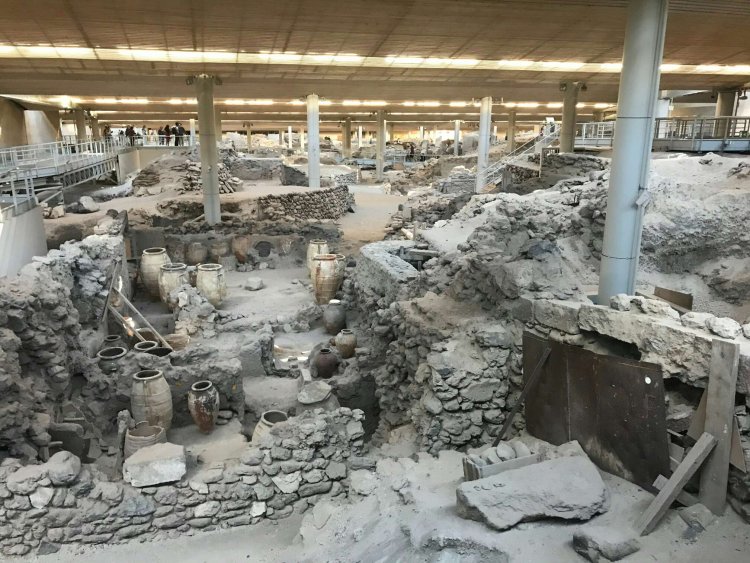 Akrotiri is the most important archaeological site in Santorini. It is an ancient Minoan settlement buried under lava from a volcanic eruption that occurred in the 16th century BC. 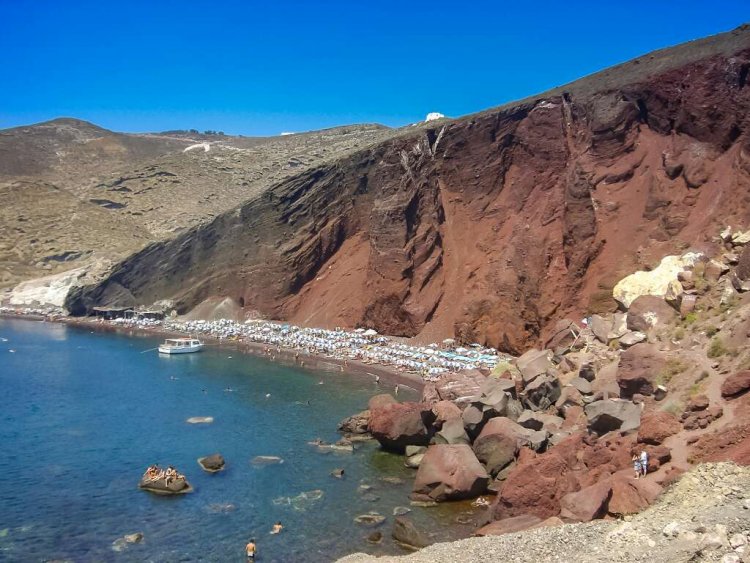 Red Beach is one of Santorini’s most famous beaches, located near the modern village of Akrotiri against a backdrop of red rock. 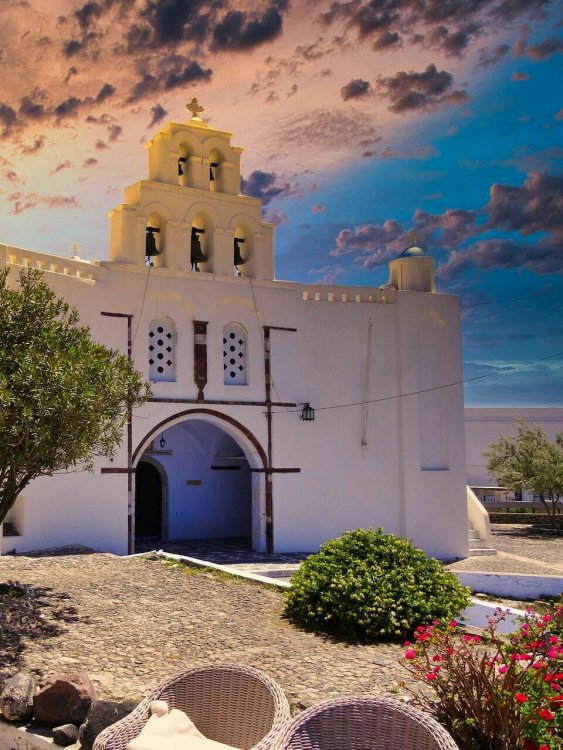 Pyrgos was the capital of Santorini until the 19th century. It is a tiny village located in the center of Santorini, consisting of white Cycladic houses built around the ruins of a medieval castle on a hilltop. 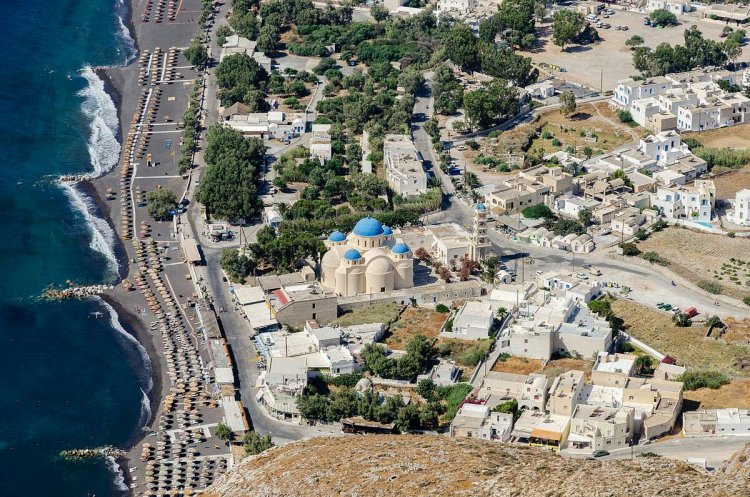 Perissa Beach is one of Santorini’s largest and most popular beaches, located on the southeast coast of the island between the villages of Perissa and Perivolos. It is a six-kilometer strip of fine black volcanic sand, along which there are numerous hotels, bars and tavernas.

The Church of the Holy Cross in Perissa is one of Santorini’s largest churches and is located near the famous beach. It was originally built in 1835-1840, but the church was reconstructed after a major earthquake in 1956. During the reconstruction, fragments of two older three-aisled basilicas were discovered, indicating that the original church was built on their foundations. 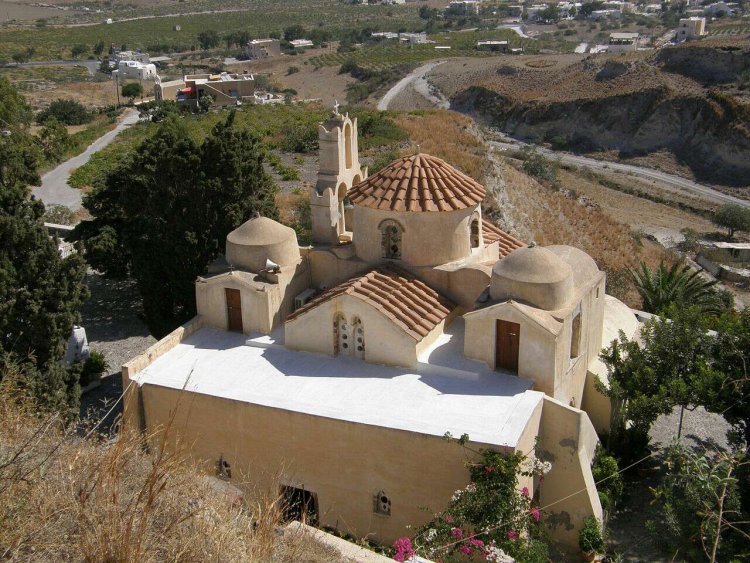 Panagia Episkopi is an ancient Byzantine church built in the 11th century. It has preserved many medieval frescoes and ancient icons. 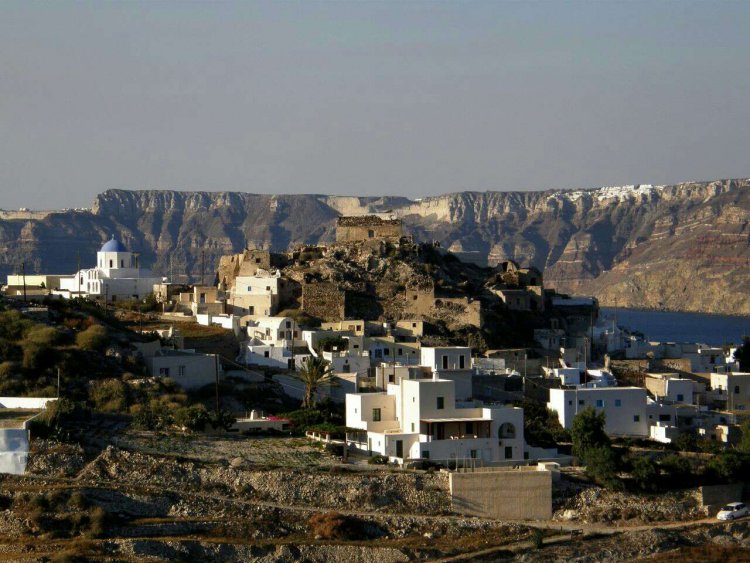 The Venetian Castle was built by the Venetians near the modern village of Akrotiri in the Middle Ages. After the Ottoman Turks took over Santorini the impregnable Venetian castle was completely destroyed. 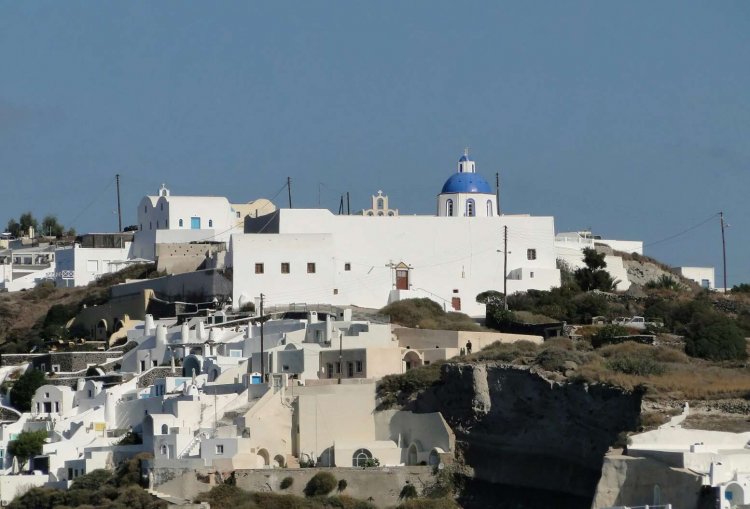 Agios Nikolaos is a convent located between the villages of Firostefani and Imerovigli. It was founded in 1651 and is one of the oldest monasteries on the island. 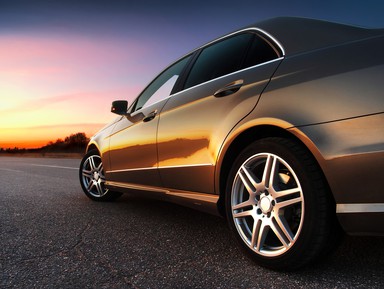